The road to Patagonia through the Lake District - Part 1 - Pucón, Chile

After spending a week on gorgeous Easter Island, surrounded by ocean and sun, and a weekend back in the massive city of Santiago, I began to head south towards the chilly springtime of Patagonia, a region that spans southern Chile and Argentina, well-known for incredible landscapes and fantastic hiking.

But first, I had to get there.  First Stop:  Pucón, Chile.

I took an overnight bus from Santiago to Pucón, a town in the lake district of Chile at the base of a towering snow-capped volcano and on the shore of an expansive blue lake, both named Villarrica.   I checked into a small, family-run hostel called One Way with a nicely equipped kitchen and comfy bunk beds, where I met back up with a group of friends from earlier in my trip - a Swede, a Dane, and an Israeli!  They had already been in Pucón a few days and were trekking on the volcano when I arrived, something I definitely wanted to try out after having it recommended to me by multiple people.  I spent some time hanging out in a local cafe and wandering around the town, then met back up with my friends for dinner and a beer that evening.

I booked my volcano trek for the next day with one of the owners of my hostel, who had owned his own guide shop before opening up the hostel with his wife.  This turned out to be both a good and a bad decision… good in that we had a very small group, left right from the hostel, and the hostel owner was able to loan me a pair of relatively new trekking boots since the outfitter we went through didn't have any that fit me…. the bad was that I definitely overpaid for the quality of the equipment we used.  Thankfully, the experience itself was fantastic.

We started early in the morning with a 30 minute drive to the base of the volcano.  During the winter this is actually a popular ski area, so there are ski lifts that you can take to bypass some of the hiking.  Out of all the various groups trekking that day, only three of us - all within my group of five trekkers - decided to save the 8000 peso ($16 USD) ski lift fee and do the initial trudge… though I'm not sure I'd recommend that decision to everyone!  The portion that most skipped is definitely the most physically challenging of the entire climb - rather than climbing up packed snow, you must slowly walk up slippery, loose volcanic rock in a pair of rented, stiff trekking boots.  I actually found myself longing for the stone steps of the Inca Trail!  Thankfully, we got through the lower portion and finally entered the snow, a much easier climb given our attire.  But, since we were well behind the rest of our group and the other groups, we needed to make the second portion of the climb very quickly.  I didn't mind going much faster as it was a good little workout and was physically much more pleasant doing switchbacks through the packed snow with amazing views of the lakes below than it was trudging up the loose volcanic rock!  We made great time for the most part, up to a false summit where the groups had taken a break to enjoy the scenery, have a quick snack, and put on crampons for the next portion of the climb.  Unfortunately one of the three of us who had made the long climb tweaked an old knee injury, so while myself and a young Spanish guy joined our guide and a French couple for the rest of the climb, the third of our original group, a young Israeli guy, had to stay behind and eventually descend with our assistant guide, without making the full ascent. 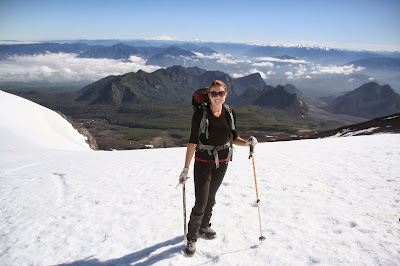 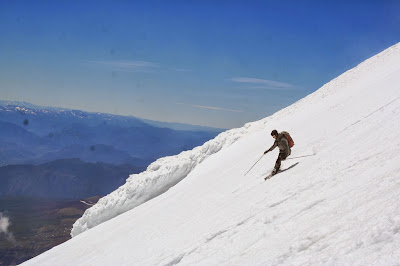 Since we were late to arrive, we didn't get a long rest, and we started on our next ascent shortly thereafter.  Now that we had met up with the lead guide and the French couple, we made the rest of the climb fairly slowly, making it the easiest portion in my opinion, and leaving me plenty of time to stop and take photos of the gorgeous surroundings... crisp white snow, clear blue sky above, and an endless landscape of lakes, snow-capped volcanoes, and misty clouds below.  We took one last quick break at a final false summit, then continued climbing for the last 20 minutes to the top.  The massive volcanic crater (which is still active, by the way) rumbled and emitted foul-smelling gas every few minutes, so we sat down well away from it to enjoy the view and the last of the snacks we had packed.  We had a decent amount of time to wander around the summit and take in the views from all sides as we added layers to protect us from the cold wind blowing across the volcano. 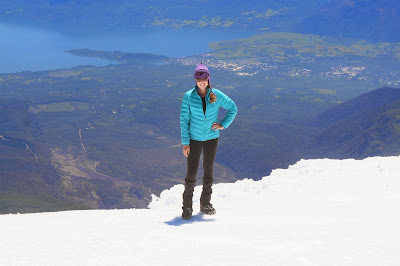 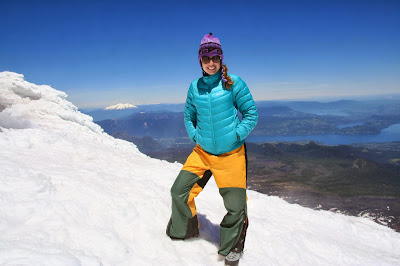 When we had finally had our fill of the scenery, we got ready for our descent…. not just a downward climb, we actually got to slide down the side of the snowy peak!  I was admittedly a bit nervous at first at the idea of careening down a steep snowy volcanic slope, but it turned out to be a huge highlight of the day.  By the time we got to the bottom of the volcano, we were windblown, wet, and grinning like children on the first snow day of the year. 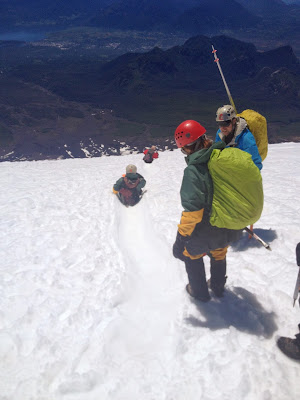 That night, the hostel owners cooked up a feast for their guests - beef, chicken, and sausage tossed with vegetables, cooked in a massive wok over an open flame, served with chunks of fresh bread, the perfect way to end a wonderful but exhausting day.

I spent a quiet and relaxing final day in Pucón, drinking coffee, booking a bus ticket, and relaxing with a book on the rocky shore of the lake just a few blocks away from the center of town.  The next morning I would spend the day on a bus, crossing back into Argentina, en route to another lakeshore town - Bariloche.

Posted by Outlander Abroad at 11:13 AM