For a country not even on my radar when I first started planning my RTW adventure, Bolivia is shaping up to be pretty incredible.  The real adventure in Bolivia started right at the border.  The process to get from Peru into Bolivia by bus goes roughly like this:  get a stamp on your immigration form at the police office in Peru, proceed to the immigration office, turn in the form and receive stamps on both the form and the passport, cross the border by foot, enter the Bolivian immigration office, turn in your Bolivian immigration form, receive an entry stamp, done.  Oh wait, that's the process if you aren't American.  If you're from the States, your process once you enter the Bolivian immigration office is more like:  go to the shop next door to photocopy your passport, change $20 into Bolivianos to pay the fee, return to the immigration office, fill out a visa request form, turn in the completed form and the passport copy, pay $135 for a visa (they will refuse some of your $20 bills for the tiniest of tears, folds, or other imperfections, and you will pay the balance in the Bolivianos you just converted), get a visa sticker on your passport, get stamps on both your passport and your Bolivian immigration form, and a signature on your visa sticker, done.  Now run down the bus before it leaves you behind, because you're the only American and everyone else was done 15 minutes ago.

Copacabana is primarily a dirty tourist town, happily situated on Lake Titicaka.  If you have the opportunity to sit at a small venue facing the lake and ignore everything behind you, you'll greatly enjoy Copacabana.  Amongst our group of four, we enjoyed sipping juice blends in comfy beach chairs facing the lake, taking in the sunset, playing the locals in games of foosball (table football to some), and even taking a big paddling duck boat out for a quick spin.  The real reason to visit Copacabana is simply to catch a boat out to the real gem of Lake Titicaka:  Isla del Sol.  The two hour boat ride is relatively peaceful and relaxing - if the weather's nice, you can claim a seat up on the roof like we did and take in the fresh air and sunshine.  If it gets a bit chilly, you can always go down below. 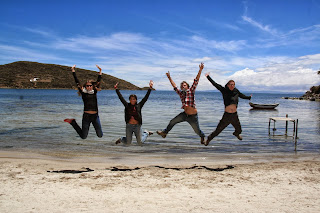 We took the boat to the north end of the island, picking up some cheap but delicious sandwiches and hot chocolate at a roadside vendor before beginning the walk to the south end of the island.  There are no vehicles on the entire island, so you'll often see mules (and plenty of sheep) wandering or being guided by the locals along the path.  We first passed over a sandy inlet before making a gradual ascent up to a set of Incan ruins on the northern point of the island, stopping to enjoy some snacks and the phenomenal view across the lake (clear blue skies, and we couldn't even see the other side in some areas), and chase around an adorable baby sheep for photos. 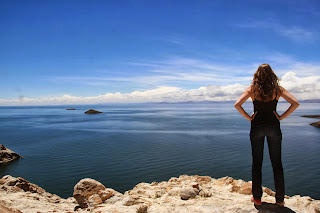 After visiting the ruins, we turned south, again making a steady ascent, then generally following a path along the central highpoints of the island all the way to the south.  We passed a couple of checkpoints along the way, purchasing water or tickets for less than a couple of dollars, and enjoying the various views - from snowcapped mountain peaks on one side, to the shimmering city lights of Puno, Peru, on the other.  Finally on the south end of the island, we selected a basic hostel (Hostel Puerta del Sol) for the night and found a restaurant with an incredible view of the lake to the west to take in the sunset - it didn't disappoint, filling the sky with radiant oranges and shades of pink.  Next door to our viewpoint, we enjoyed quinoa soup and fresh trout for dinner, before turning in under a blanket of stars.  We made a quick descent the next day and rather than boat over to Isla del Luna - the smaller, sister island nearby - headed straight back to Copacabana to catch a bus to La Paz. 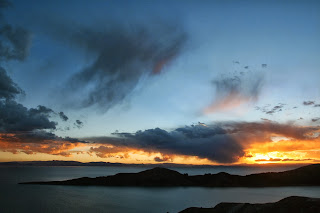 La Paz is a big, filthy, interesting city.  The de facto capital of Bolivia, the president is situated here.  We checked into Loki, one of the local party hostels, known for comfy if not quiet rooms, great food, and an entertaining bar scene.  I'm not generally a huge fan of the party hostel scene, but in a big city, they become a nice refuge and place to meet interesting people.  Any time a city offers a free walking tour, I highly recommend making that your first priority to get to know a little bit about the background and culture of where you're staying.  We took advantage of the free tour offered by Red Cap, which meets in the San Pedro plaza daily at 11am and 2pm.  The guides were wonderful, and led us through the city for the next three hours, from the infamous San Pedro prison (no, we did not go inside.  don't.)  to various local markets (including the witch market), churches, and the presidential residence.  During the tour we also came to know a few other folks from our hostel, who would prove to be great companions for exploring the city further, and of course, for enjoying a few local beers later that evening. 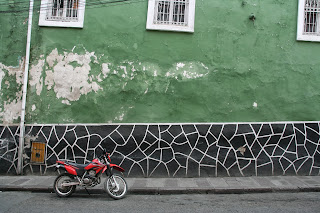 Anxious to get out of the big city, we booked an overnight bus to Sucre - the actual capital of Bolivia - after a few nights.  We wound up selecting an El Dorado bus, which offered relatively comfortable cama seats and a terrible German movie dubbed over in Spanish, for the 15 hour journey.  Sucre, by contrast to La Paz, is a gorgeous, relatively quiet colonial town, with a carefully manicured green central Plaza Maya. 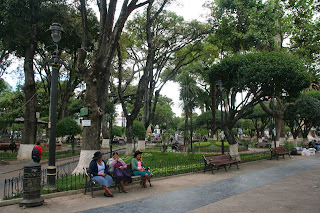 Here we selected Hostal Pachamama (that's mother earth), which is a bit of a walk to the center of town, but offers cheap, comfortable rooms, a gorgeous central garden, and a nice, big community kitchen.  We took great advantage of that kitchen our first night, picking up some pasta at a local supermarket, and visiting the nearby central market to pick up plenty of fresh vegetables (and even some very fresh goat cheese) for a tasty meal.  We revisited that market the next day for a phenomenal lunch, selecting one of the restaurant stalls in the back corner that appeared to be both clean and packed with locals, and enjoyed chicken cooked in a rich, warm sauce with root vegetables and rice. 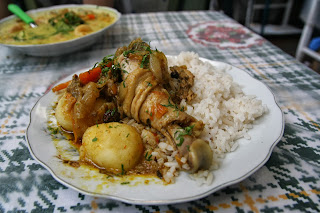 Downstairs in the market, we picked up fresh fruit juice from a lady with a radiant smile and personality to match.  Most of our time in Sucre was spent relaxing, wandering the town, and shopping, with a particularly long stop at upscale AwajWarmi, where we tried on gorgeous coats made of 100% alpaca, uniquely and personally designed by the vibrant shop owner. 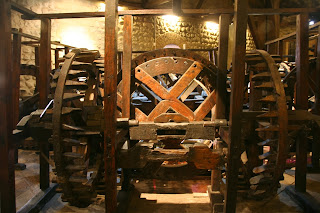 Our bus to Potosi arrived a bit later than planned (we had to stop for over an hour for a cycling competition to finish up), so our plans got mixed up a bit upon arrival.  Rather than heading straight for a tour of the silver mines (we booked a tour in advance from Sucre, which I do not recommend - while our tour guide was great and we enjoyed ourselves, we didn't get the full experience, and we weren't able to ensure that the fee we were paying, which was twice what it should have been, was going back to the actual mine workers), we spent our first afternoon touring the Casa de la Moneda, which is where coins were printed from the Spanish colonial days up until the 1950s.  The tour lasted about an hour and a half and was actually really interesting and informative - we saw not only all the versions of equipment used to print the coins over the years (from the original wooden turnstiles - the only original equipment of this type still in existence - pulled by mules, to manual equipment designed by Leonardo da Vinci, all the way to electric-powered gears), but also original colonial-era art (including a canvas depicting the Virgin Mary as Pachamama - Mother Earth - and one of Jesus being led to the cross not by Roman soldiers, but by the Spanish), a sampling of the various minerals found in the mines, Incan artifacts, and beautiful, artesian works of silver.  We wound up staying at the Hostal Compañia de Jesus, a converted monastery, which, despite lacking heat (don't worry, they pile on the quilts on the bed), has lightning-fast internet (when it's actually on, which is sporadically), and the hottest shower with the best water pressure I've had since arriving in South America. 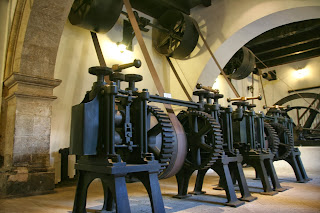 The next morning we had our tour of the actuals mines, which included a stop to the miners' market, where we bought gifts of coca leaves to bring to any miners we might meet at the mines themselves (being Sunday, we didn't spot any workers, but gave them to the mining families living near the entrance we used).  Once we were suited up in a hard hat, rubber boots, and something resembling surgical scrubs, we made our way up to and through the mines, visiting a couple of different levels and making stops to see holes that had been drilled for dynamite, and a representation of the devil, where the miners bring gifts of coca leaves, alcohol, and cigarettes to ask for a 'fertile' visit.  (Note - they don't worship the devil - this harkens back to indigenous days when they believed the (masculine) god of the underworld (who wasn't evil) 'impregnated' Pachamama with the precious minerals they were searching for.  When the Spanish came around, the Catholics put a face to the "god of the underworld", as the devil, much as they tried to represent Pachamama as the Virgin Mary to convince the locals to convert). 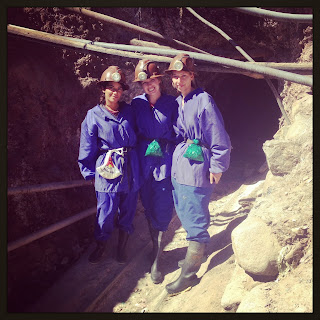 We spent the rest of our time in Potosi relaxing and sampling a beverage called a "submarine" - it's basically hot chocolate, but you're served a steaming cup of milk and a large piece of chocolate, which you stir into the milk.  Absolutely wonderful on a chilly afternoon!  From Potosi, we took a long bus to Uyuni to visit the famous Salar de Uyuni, the salt flats and the surrounding areas.  The tour was absolutely phenomenal, and definitely worthy of its own post!
Posted by Outlander Abroad at 4:38 PM