Anytime you're traveling long-term, it's important to have days, weeks even, where you must stop being a traveler, ignore any tourist impulses, and simply live.  After a whirlwind month of zipping through Peru and Bolivia, after two straight days of buses and stress and meltdowns, I knew I needed a break. My brief stint in Argentina (don't worry, I'll be back), presented the perfect opportunity to briefly pause and enjoy the normal rhythms of life, while still taking in the unique offerings of the cities.

At the eclectic Hostel Alvear in Cordoba, breakfast (with cereal! and milk!) was served until 10 every day, and I routinely woke up at 9:50, just in time.  I usually spent some time in the morning getting caught up on photo sorting or writing or chatting with friends, and wandered around the town to have lunch and coffee and see a beautiful building or two.  After traveling nonstop with a friend for the last few weeks and arriving in the city alone, I had worried if I would be able to find people to hang out with or travel with in Cordoba, but those fears were quickly alleviated.  I met a nice English + American couple who invited me to lunch at an amazing Middle Eastern restaurant (Zete) my very first day, and although they left that afternoon, I quickly met another couple of travelers from Sweden and the Netherlands, respectively, who invited me to share the homemade pizza they had just cooked up in the hostel kitchen, having made way too much for themselves.  They also invited me to join them to meet up with a local Argentinian girl they had met at the market the following evening for drinks.  And thus, a new travel friendship was born! 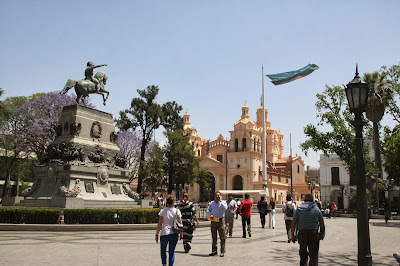 The next day, I spent some time at a restaurant on a small square near the main plaza enjoying lunch on my own before attempting to find the local CrossFit gym, and a young Argentinian guy offered to buy me a coffee and joined me, struggling a bit with English but interested in speaking to a foreigner.  This was my first experience with one of the locals, but definitely a sign of things to come - the people in Cordoba were incredibly friendly, incredibly helpful, happy for an opportunity to practice English for the most part, and interested in the rest of the world.  My next encounter was on the bus to the gym - as I boarded the bus with nothing but an address and some cash, I quickly learned that I needed to have bought an electronic bus card and loaded it up with bus fare in advance.  One of the women on the bus let me use her card in exchange for the 4 peso fare in cash, and another younger girl offered to help me find my stop.  Not only did she point out the street, but she actually got off the bus with me to guide me to a store to buy a bus card, then all the way to my destination, excited for the chance to speak English (as she was studying it in school) with a native speaker. 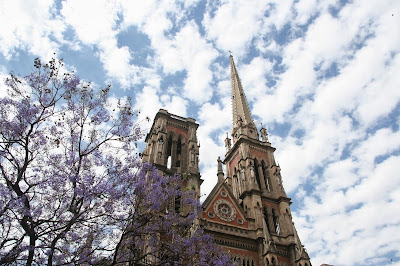 My experience at the gym was no different, and I was incredibly lucky to have found it, as they had only been open for three weeks.  Briskbox Crossfit had a gorgeous facility, passionate coaches, and were incredibly welcoming to a foreigner who spoke zero Spanish.  I had three days in a row of great workouts (though the first day nearly killed me - I learned the hard way that "walking around old towns" for a month does not equate to "in shape for CrossFit"), and the owner even gave me names of other boxes in the towns I would be visiting, going so far as to send an introduction email to the box in my next destination, Mendoza.

I also quickly learned that Argentina operates on a completely different frame of time than the States or the other countries I had visited in South America.  They wake up late, have a very long siesta in the afternoon, have a completely separate meal in between lunch and dinner, eat dinner very late, and go out even later.  When we visited our new Argentinian friend Kat, we arrived at her apartment around 10:30, grabbed some delicious empanadas around the corner roughly an hour later, and around 1:30 AM, she announced she was changing into a dress and apologized for it being so early, but was it okay if we went to the bar soon?  We explained that in our countries, the bars would be closing soon.  We arrived at a local club called Black Sheep (a modern structure perched up on stilts, attached to an art museum and overlooking a church) around 2:30 and didn't leave until close to 4.  The next evening, I cooked a meal of fresh vegetables and pasta for Kat and my European friends back at the hostel, sitting down to dinner around 11 and enjoying Fernet and Cokes and a hilarious game involving receiving the names of famous people and trying to guess who "we" were, until I headed to bed around 4. 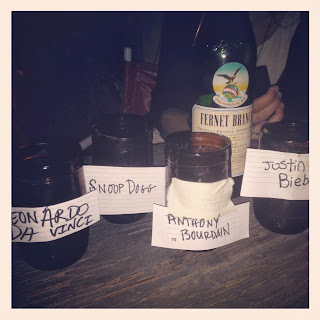 Our final full night in Cordoba was a huge treat, as an Argentinian couple at the hostel invited us to join them for a cookout, including a variety of sausages and classic Argentinian preparations of beef (our contribution was vegetables, bread, cheese, and doing the dishes), also a late-night meal.  Another treat in Cordoba - the wifi was actually fast enough that I could connect via VPN to American internet and stream the Alabama-Tennessee football game! 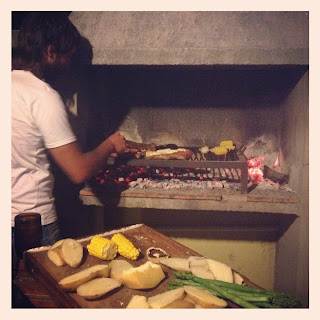 My time in Mendoza continued my pattern of enjoying some of the particular offerings of the city, while remembering to "just live".  Thanks to the folks in Cordoba, I quickly located CrossFit Andino, who were incredibly welcoming and had some great programming.  An added bonus - a fluent English-speaker in my class sent me a list of things to see and do in the city, including a wine-tasting spot close by our hostel that we quickly took advantage of.  With a crowd of three English, three Americans, a Dutch, and a Swede, we enjoyed a flight of five typical Argentinian wines at a spot called Vines of Mendoza.  And since we had eight people, we bought the full bottles of wine instead of the actual individual flights, giving us more to drink for roughly half the price.  And for those wine connoisseurs out there:  Caelum Chardonnay 2012, Catalpa Pinot Noir 2011, Zorzal Terroir Único Malbec 2012, Mazzotta Cabernet Sauvignon 2010, Suipacha Otero Ramos Reserva Petit Verdot 2011.  And since five glasses of wine wasn't enough, we stopped by a cocktail bar called Cachita's afterwards for a fantastic burger and another round of drinks for a few members of our group. 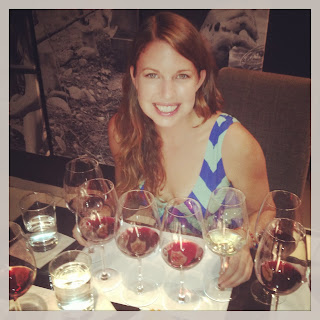 Another typical activity you can't miss in Mendoza is taking a bike tour of the local wineries, and you can easily guide yourself (or a group) through the region with a quick visit to one of the local bike rental agencies.  We rounded up a group from our hostel, plus a friend I had met back in Cusco, and took the bus out to Mr. Hugo's in Maipú to rent our bikes.  We picked up three other travelers on the bus ride to form a group of 7, rented our bikes, and started our tour self-guided tour.  We started at a spot called Domiciano, where we sampled a 2010 Malbec and a 2011 Syrah, then headed over to a spot called Entre Olivos for a sampling of olives, olive oil, and similar products, as well as some of their house-made liquors.  Our final stop was a winery called Tempus Alba, where we enjoyed a massive steak lunch (if you can call a meal at 5 PM lunch) with a 2010 Cabernet Sauvignon.  The wineries close around 6, so we had planned a stop at a nearby beer garden (which closes at 7), but my bike got a flat tire, stranding me at the last winery until Mr. Hugo could bring a replacement.  At that point we decided just to head straight back to return the bikes and catch the bus back into town for a quiet, restful evening at the hostel. 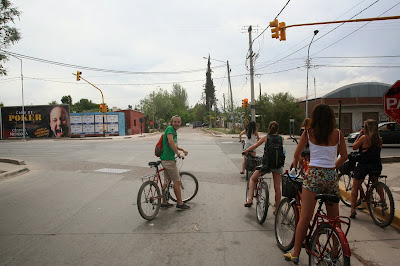 Our final full day in Mendoza was Halloween, which is unfortunately not really celebrated in Argentina, so the closest thing we had to costumes was one of our American friends sporting a jack-o-lantern hat for the day :).  But we were determined to go out that night to celebrate regardless. After I returned from my last visit to CrossFit Andino, we shared a few rounds of drinks with some new arrivals to our hostel (Chile was having a long holiday weekend, so Mendoza was suddenly inundated with young Chilean travelers) between the free wine hour at the hostel* and more Fernet and Coke.  We later ventured out and found a great little spot called Bar Latina on one of the nearby entertainment district streets.  The gals in the group had incredible, fresh peach mojitos served with paper umbrellas on the straws, while the token male of the party sampled a beer or two.  (Clearly he was missing out.)  Either way, it was a great way to spend our final hours in Argentina (for now), before heading to Chile the next morning. 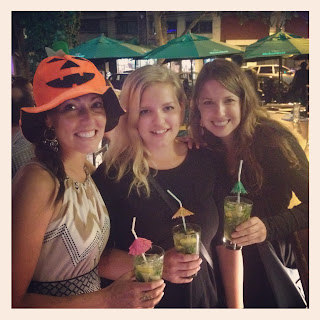 *Hostel Independencia in Mendoza offers not only a free wine hour from 7-8 every night, but also has a full breakfast with freshly-made crepes every morning.  It's worth staying there for those two offerings alone.

Posted by Outlander Abroad at 11:34 AM