Peaceful Pokhara - Preparations for and Recovery from Annapurna

Getting to and from Pokhara, a peaceful lakeside town that's wonderful for relaxing, hanging out, and both organizing and recovering from a trek around Annapurna, was no easy task.  The roads are narrow and winding, mostly dirt and gravel, and there are frequent traffic jams for construction or passing large trucks.  I decided to save a bit of money and took the cheaper ($7) non-air conditioned bus on the way there, which quickly became brutally hot and dusty as we sat still for long periods of time.  I splurged on the way back, spending $12 for air conditioning (and a bottle of water), though by booking through my guesthouse I also got a small buffet included during our lunch stop, so the extra $5 was money well spent in my opinion!  Though the craziest thing about the initial drive up to Pokhara was that I ran into even more members of my India tour who had booked an extended stay in Nepal through the same company - their comfortably air conditioned, roomy bus made the same lunch stop as mine on the way to Pokhara, though they were coming from the nature conservatory at Chitwan. 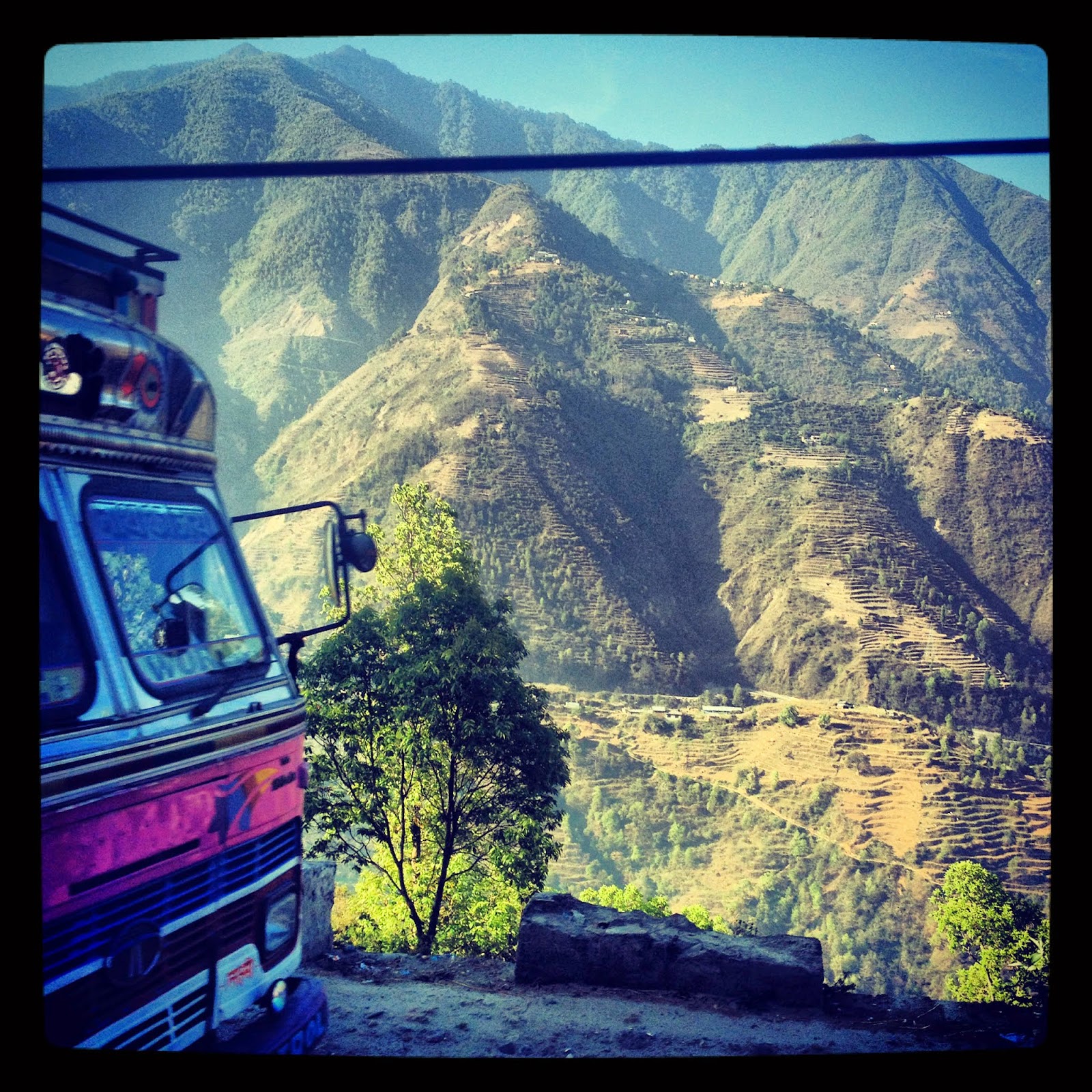 Upon arriving in Pokhara, I checked into the Peace Eye Guest House, a quaint spot that Kirsten and Christina had recommended with incredibly cheap, comfortable rooms (I paid $4.50 for a single with a shared bathroom, and later only $6 for a single that included a bathroom), kind staff members, and a tasty vegetarian restaurant.  Just next door was one of our favorite spots for breakfast, where I would wind up meeting the entire crew I would later go trekking with.  The place was called Oju, a small guest house boasting a tiny open-air restaurant, the highlight of which was the incredible bread - from French baguettes to 'chocolate bread' to actual calzones - that were baked fresh daily by guesthouse manager Chiran.  Not too far down the road was a spot called Cafe Concerto where I could get tasty coffee and one of the better wifi signals in town.

Kirsten and Christina actually met me in Pokhara after I had been there for a day, and we woke up early the following morning to attempt a workout.  Really we tried to go for a run at a nearby "park", but it was a bit small and there were some kids doing military style exercises, so we found an old concrete table and benches that we used to create some mini workouts / stretching - I did a couple of CrossFit style rounds involving box jumps (onto the bench), pushups, squats, lunges, sit-ups, etc. - to the amusement of a group of locals nearby who stared at us like we had absolutely lost our minds.  The benefit to being up so early though was that we had a gorgeous view of the Annapurna Range before the clouds had settled in!

The following morning, we decided to hike up to the World Peace Pagoda.  Joined by Kirsten's and Christina's friend Eric from their time volunteering in India, we walked down to the lake where we rented a boat to ferry ourselves over to the trail, allowing for a relaxing (as long as you weren't the one rowing - thanks, Eric!) view of the mountains and town surrounding us.  The hike turned out to be a lot of steps straight uphill through a wooded area, complete with families of monkeys throughout the trees.  We made it to the summit within a couple of hours, stopping every once in a while to enjoy the scenery.  The trees gave way to an open garden-like area with a large gold and white stupa on one end and a refreshingly cool breeze.  We removed our shoes and slowly walked around the Pagoda, taking in the incredible view - tiered fields on one side, the lake and town below on the other, and the Annapurna Range off in the distance, slightly obscured by hazy clouds.  We hung out for a while enjoying the sun (a bit too much, as we all wound up a bit burned in the end!) and the breeze before making a quick descent and lake crossing to get back for a lunch of momos. 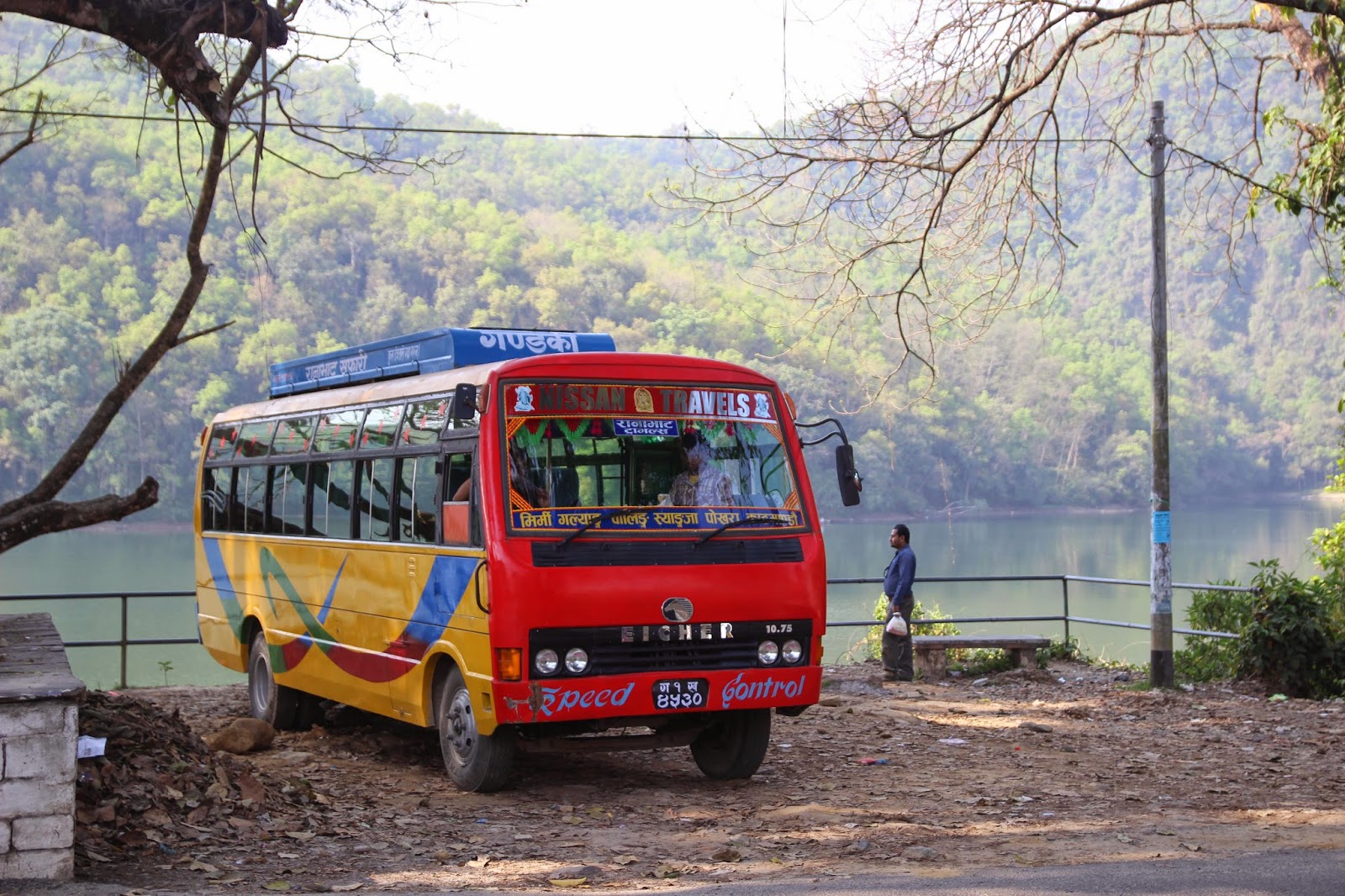 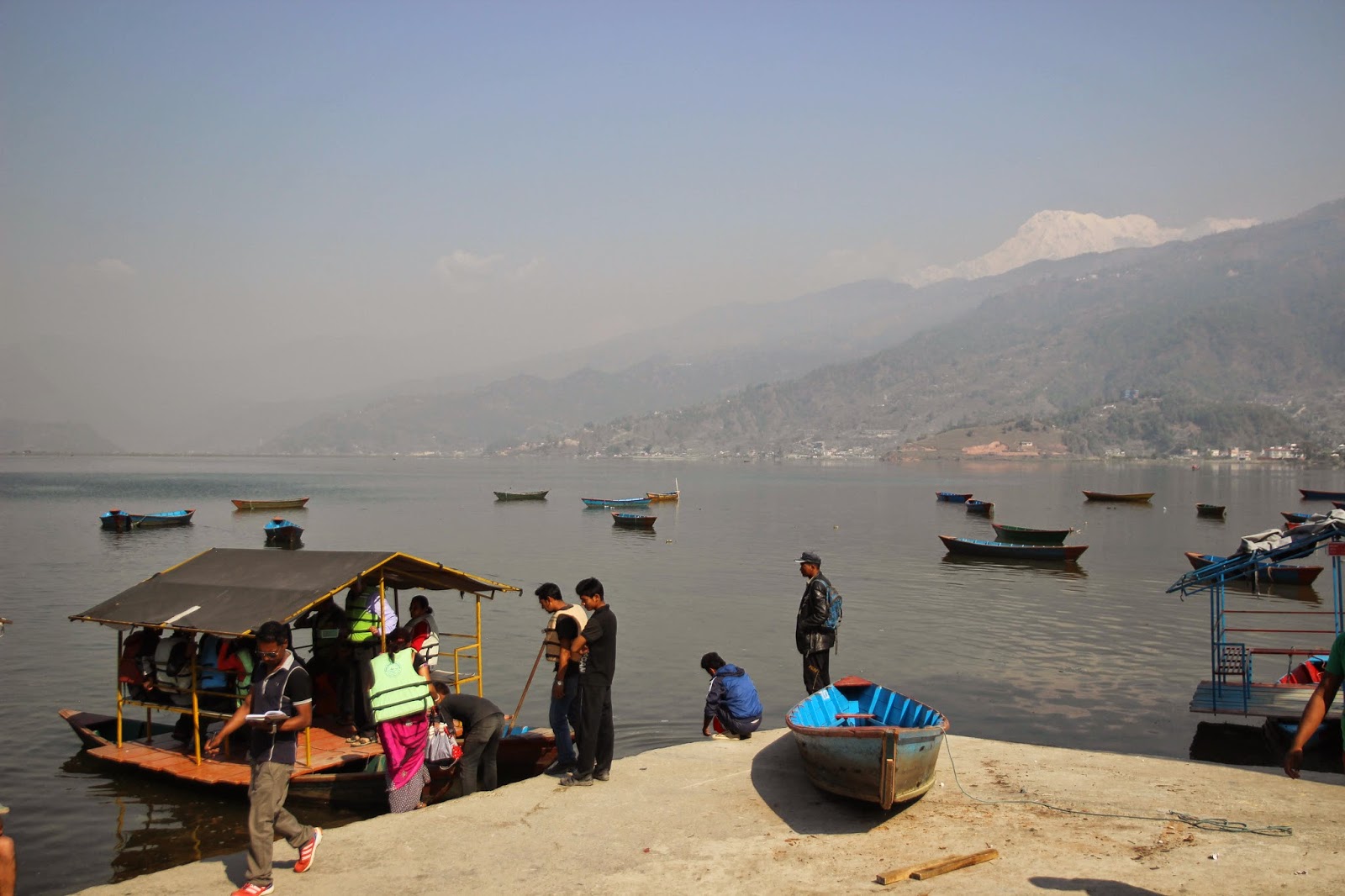 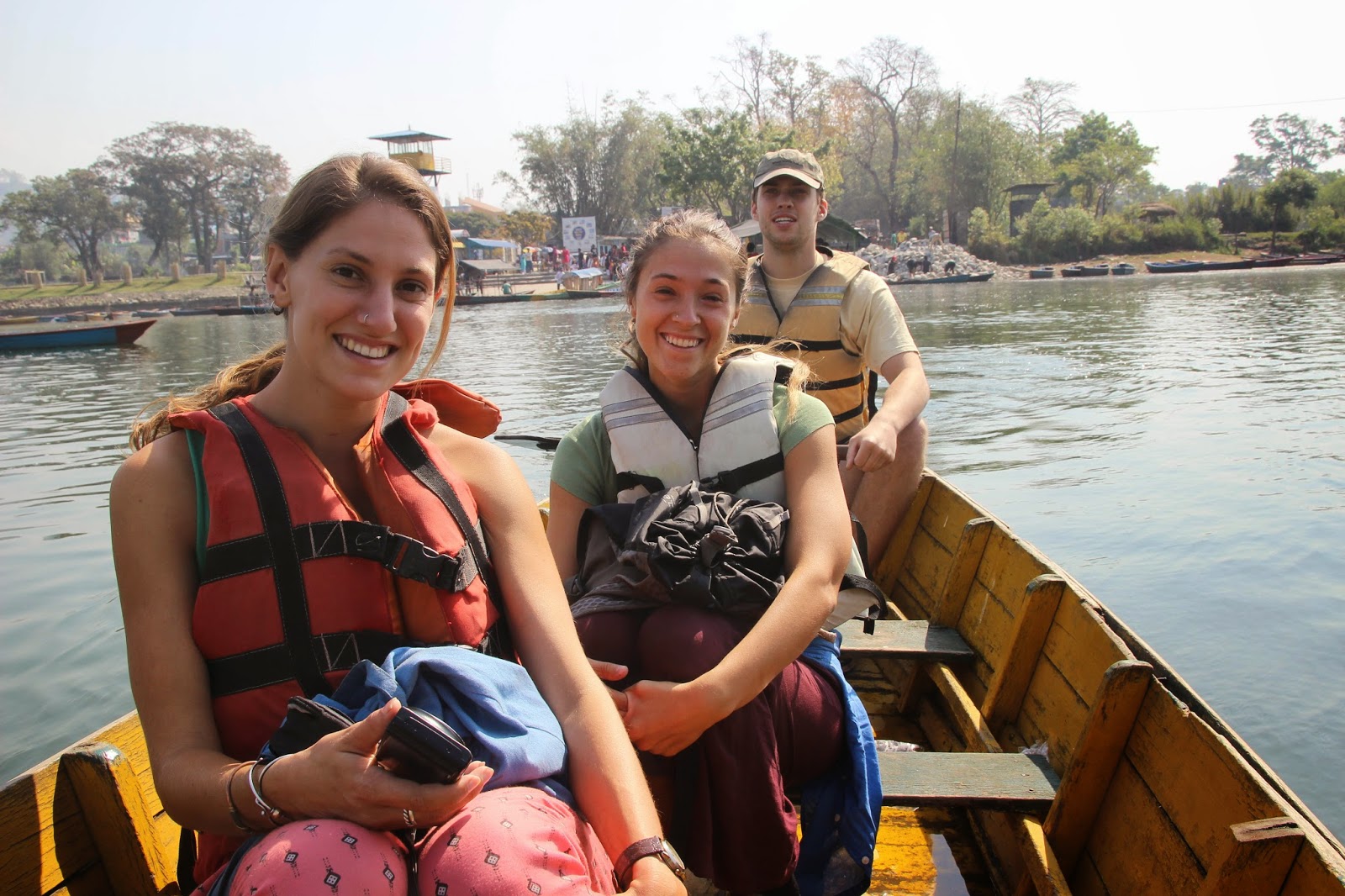 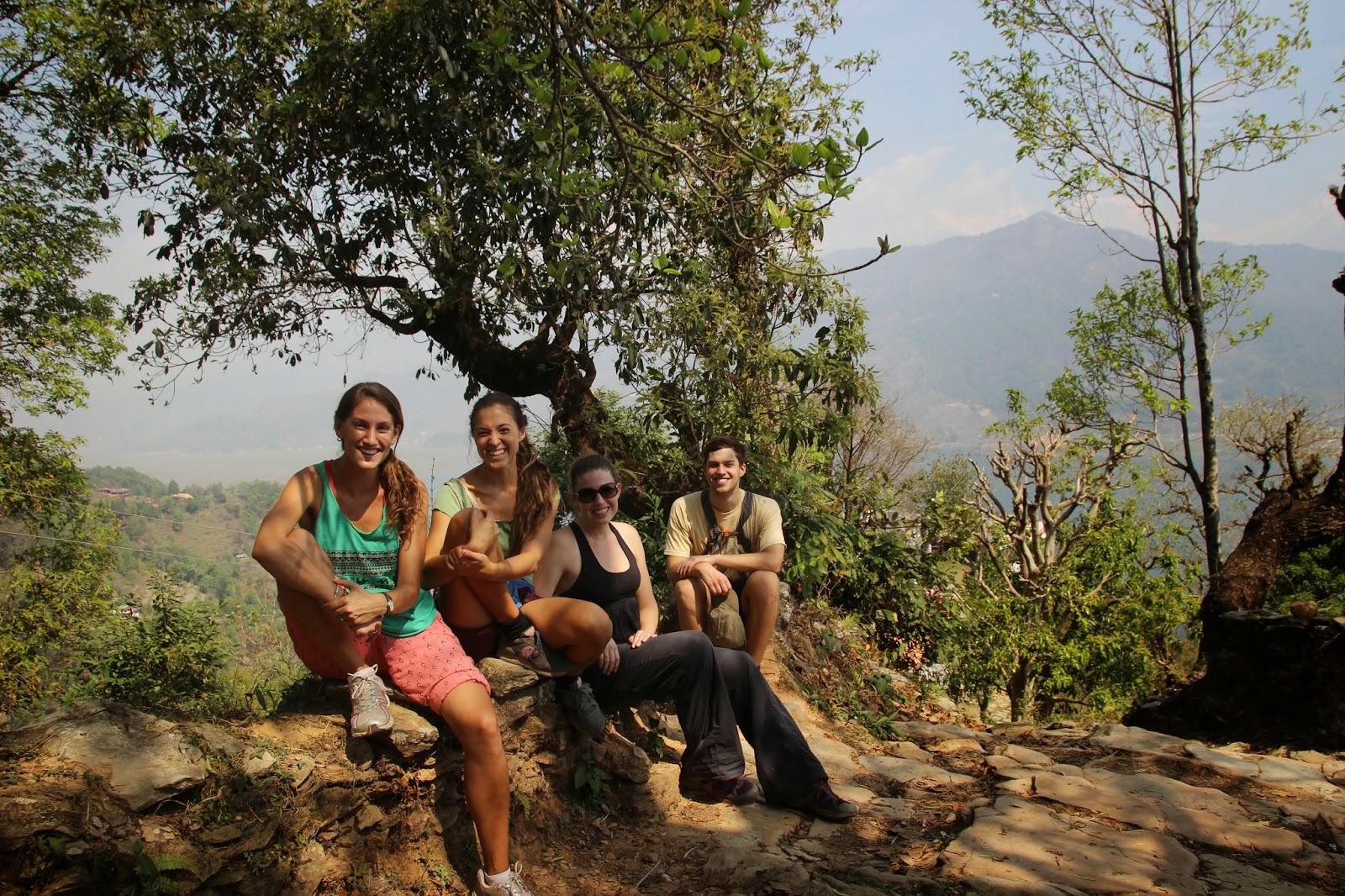 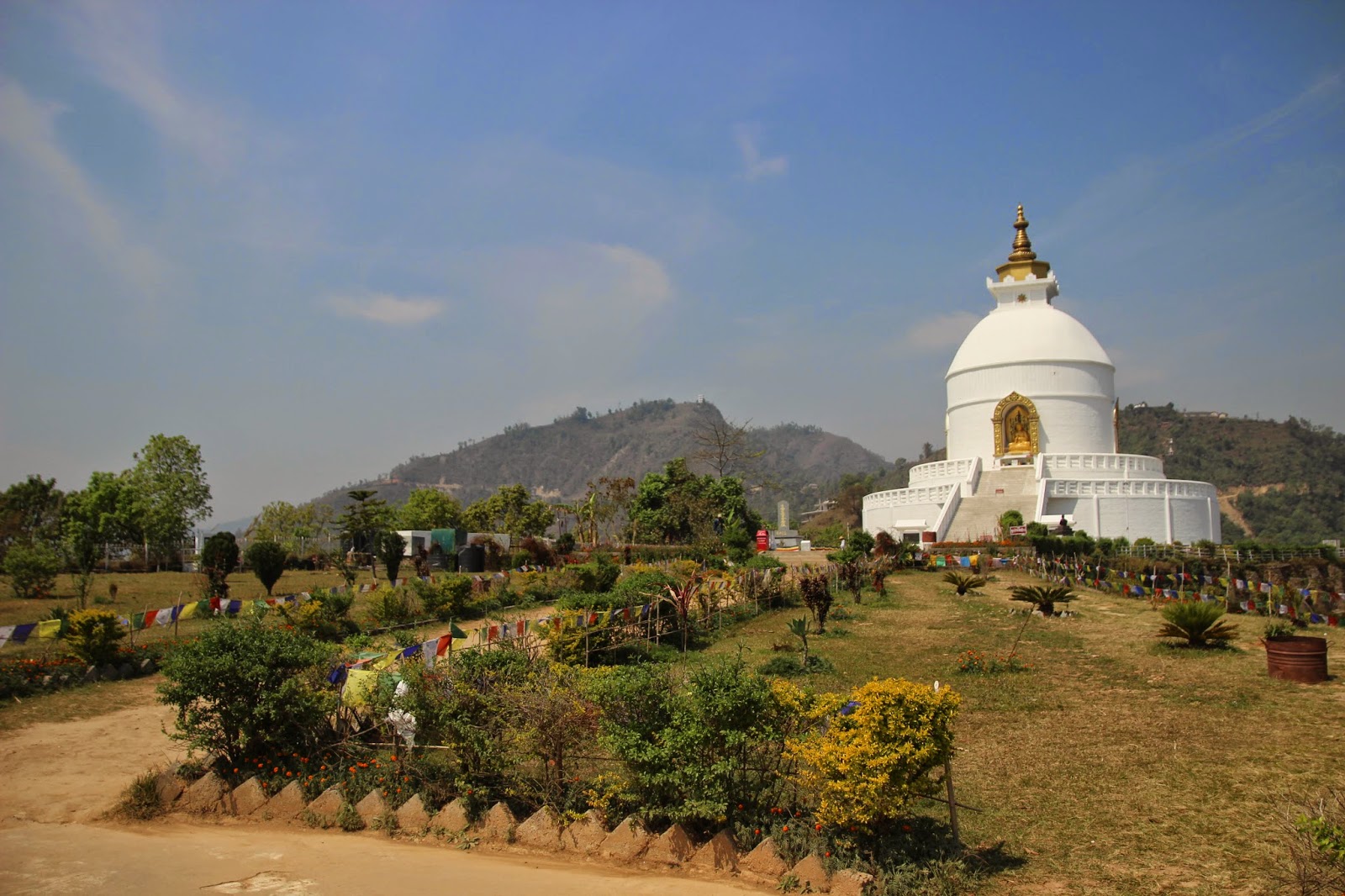 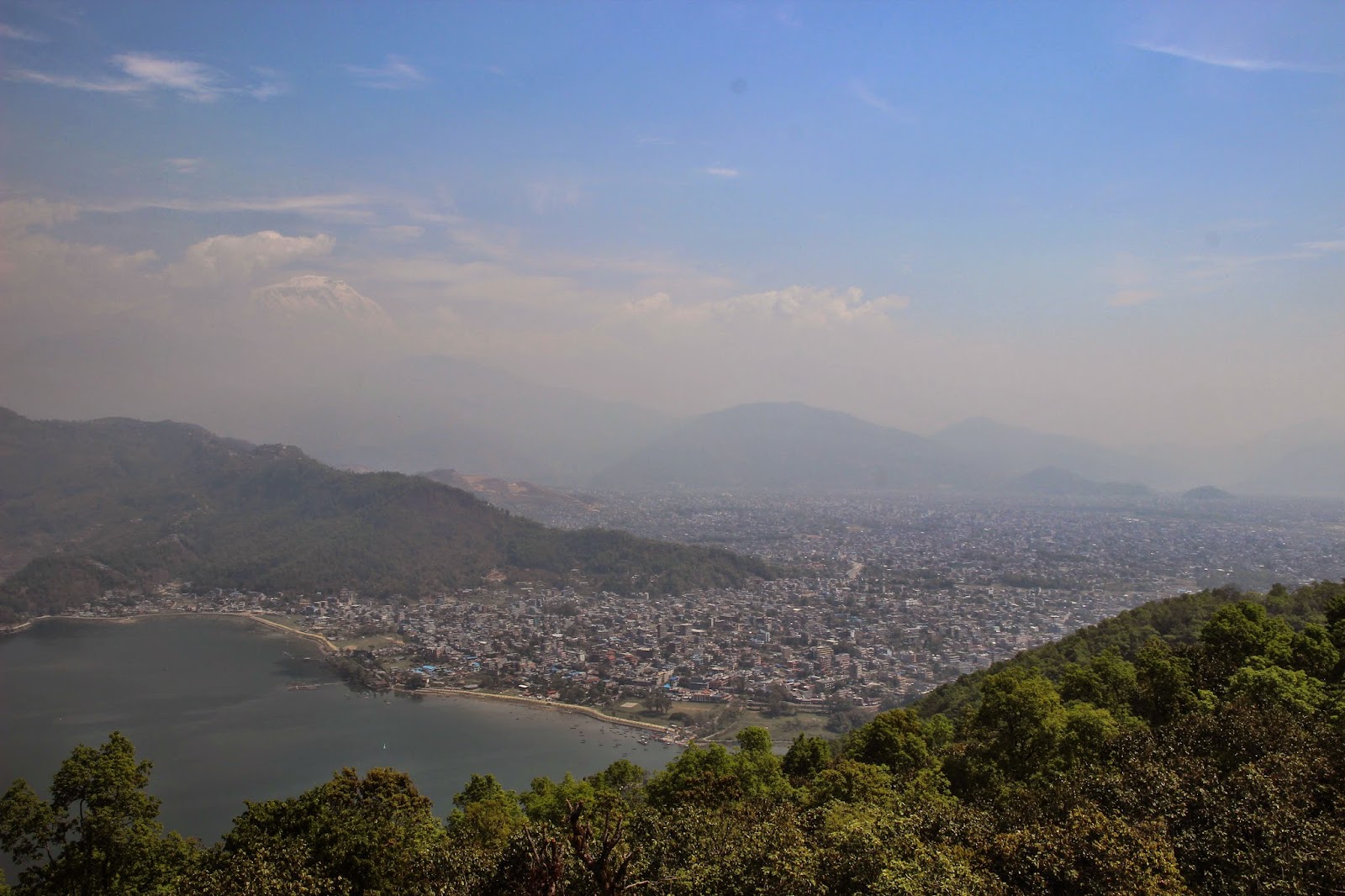 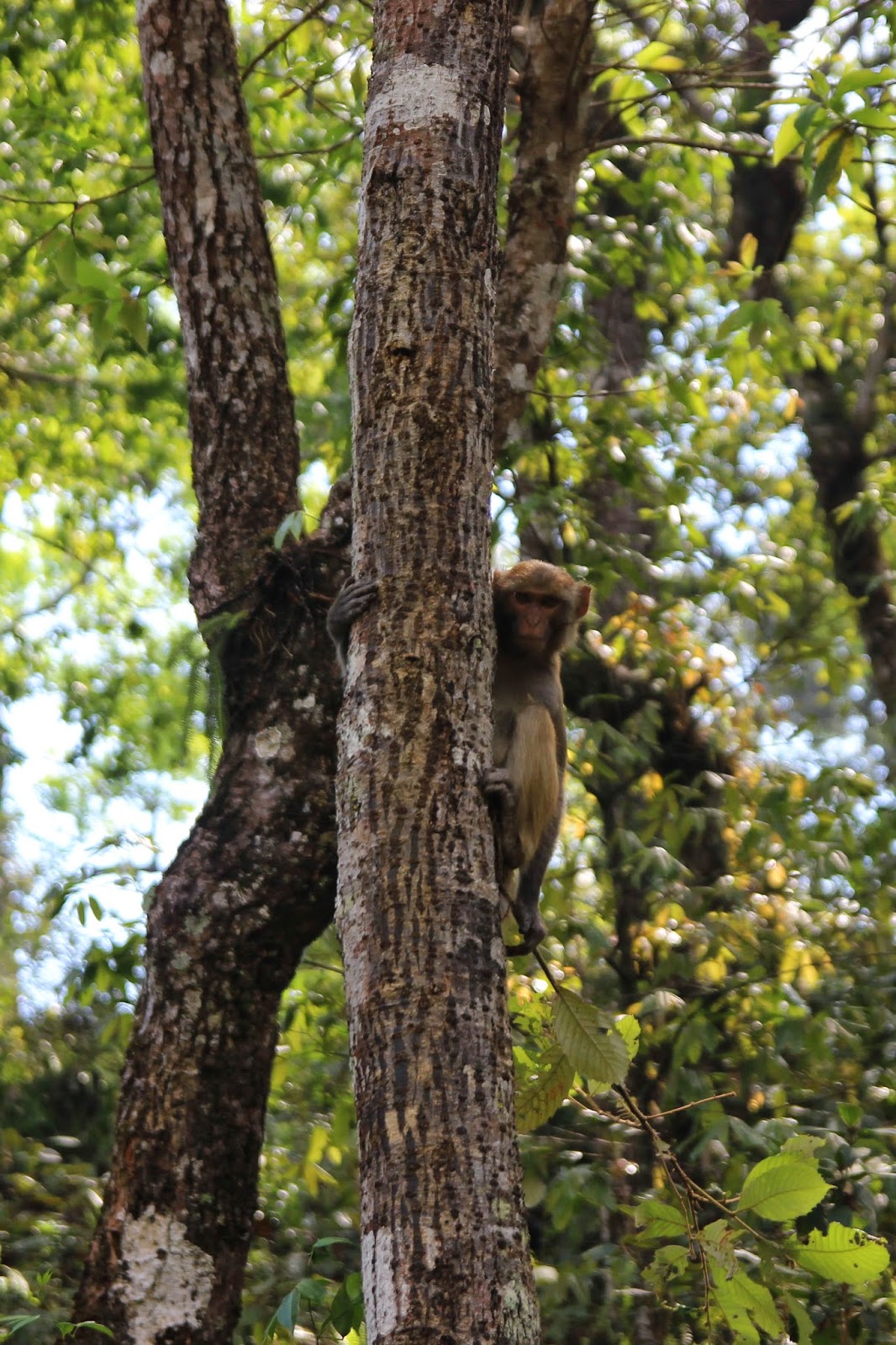 That evening, as fate would have it, we had been invited back to Oju for a big dinner being cooked by some of the girls who had been staying there for some time - an incredible ratatouille of eggplant, zucchini, and tomato over rice, finished off with a key lime pie for dessert.  As we enjoyed our meal and chatted with the group, we learned that the reason for the meal was a sendoff for their trek the following day.  They were planning to trek to Annapurna Base Camp, saying it would take 7 to 10 days to complete.  During my entire stay in Pokhara (and Kathmandu, truly), I had been on the lookout for a trekking group, not really wanting to do the entire Annapurna Circuit (at roughly 16 days, it was a bit intimidating), and hoping for something in the 5 to 7 day range.  I mentioned that it was too bad I hadn't realized earlier that they were leaving and that the route they were taking was such an ideal amount of time, and before I knew it, I was being convinced to join them!  They weren't leaving until the afternoon, as three members of the group (Miriam, Ali, and Jo) had been working at the local hospital and needed to complete their final rounds, and one of the girls (Mel) offered to accompany me around town that morning to get my permit and pick up a few last-minute supplies.  Probably because I'm absolutely insane, I agreed.

The following morning, I dashed all over town, trying to get a trekking permit (the permit office was actually closed until 10, but thankfully my hostel could arrange the permit for me fairly easily for only an extra $5 - done!) as well as rent a set of trekking poles and a sleeping bag that would keep me warm enough (I should have gone with a thinner one, as the one I got was far too heavy!!).  With everything miraculously taken care of, I hurriedly packed, booked a flight to Bangkok for a couple of weeks later, and bid farewell to Kirsten, Christina, and Eric before meeting up with the group that I would be spending the next 7 days with!

When we returned to Pokhara, it was in a state of complete and utter exhaustion from the trek.  As a result, there was a lot of relaxing and eating on the agenda, but we also wanted to celebrate our accomplishment!    Our second night back, Chiran (manager and baker of delicious bread) at Oju prepared a feast for us to celebrate our return - eggplant stuffed with minced buffalo and rice, with fresh veggies on the side, and an amazingly rich chocolate cake for dessert!  That evening was also Billy's & Izzie's (a pair of siblings from England) last night with us, so we decided to go out to local bar Busy Bee.  I didn't plan to stay long, but as soon as the live band came on and opened with 'Sweet Home Alabama', I couldn't resist joining the group on the dance floor, where we remained until the bar closed at 11. 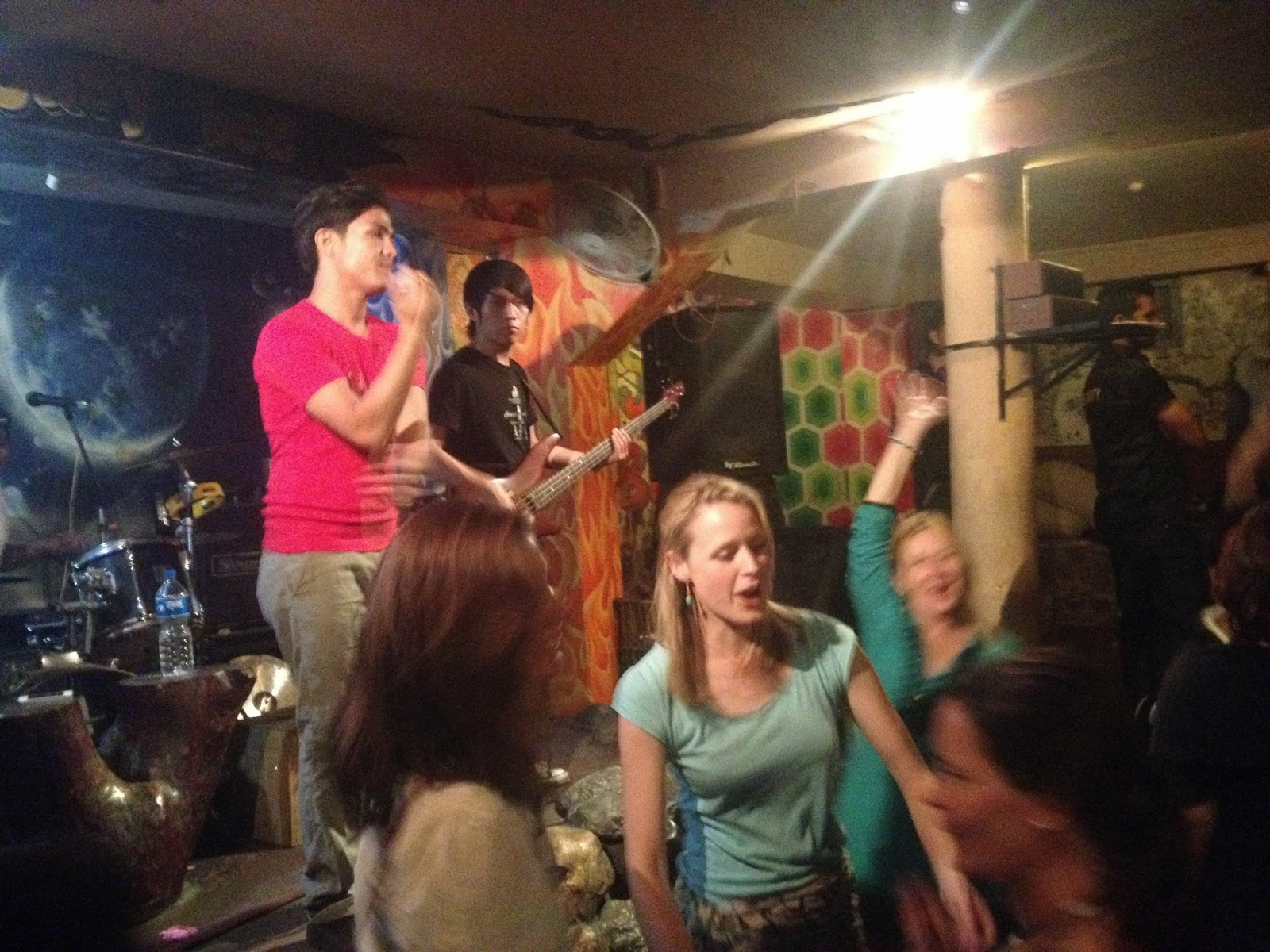 I had booked a very much-needed post trek massage for the following day, at a spot called Ayurveda Health Home, which my hostel had recommended and helped me book an appointment with.  I was very pleasantly surprised when I arrived to find such a clean, peaceful retreat set away from the main road in a residential area.  I was served green tea and escorted to a room where I spent 75 minutes getting my muscles in semi-working order again!

On my final full day in Pokhara, I took a shopping venture out with the girls, where we wound up running into more friends from the trek and spending time at a spot called Perky Beans, which serves incredible milkshakes in massive mugs.  That evening, Chiran prepared another special meal for those of us who were still in town - a buffet-style sampling of items, including an egg and tomato dish, corn with minced sausage, chicken, mixed veggies, and rice.  Dessert was an incredible lemony cheesecake with a thick, sweet crust.  That evening I wished everyone farewell and thanked them for being such a wonderful group, and adopting me for the trek to Annapurna Base Camp, an experience I will be sharing shortly… :) 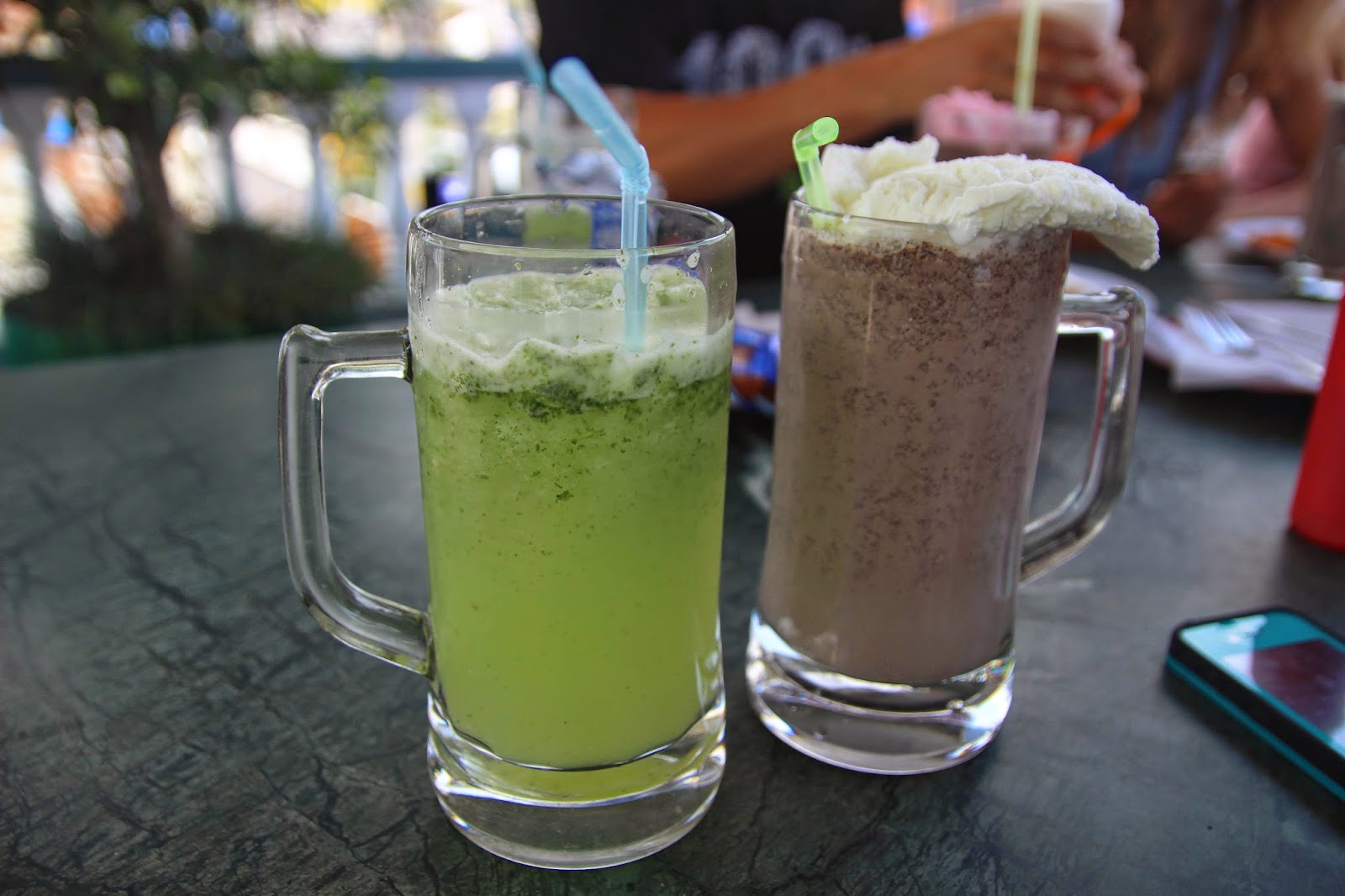 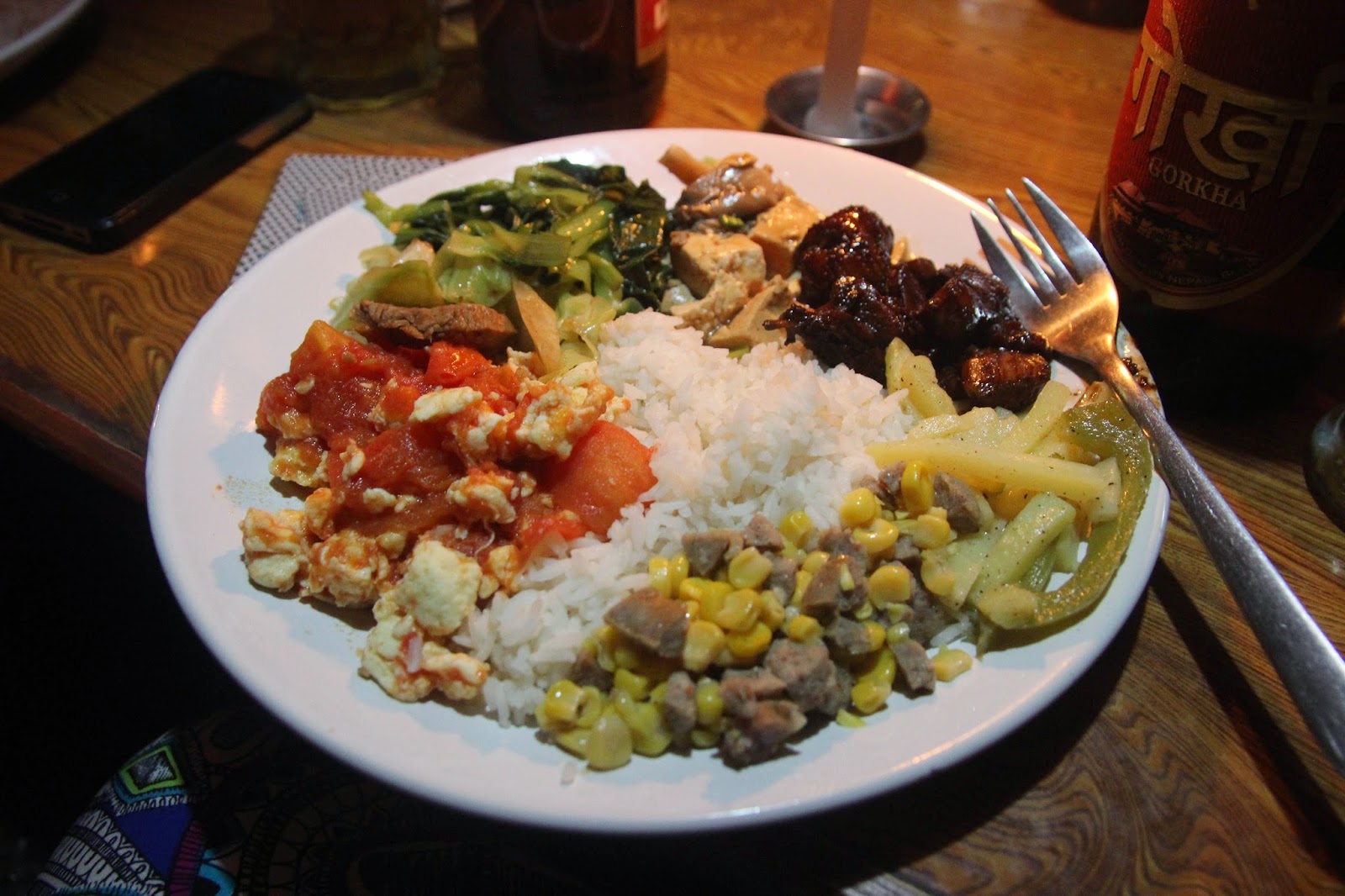 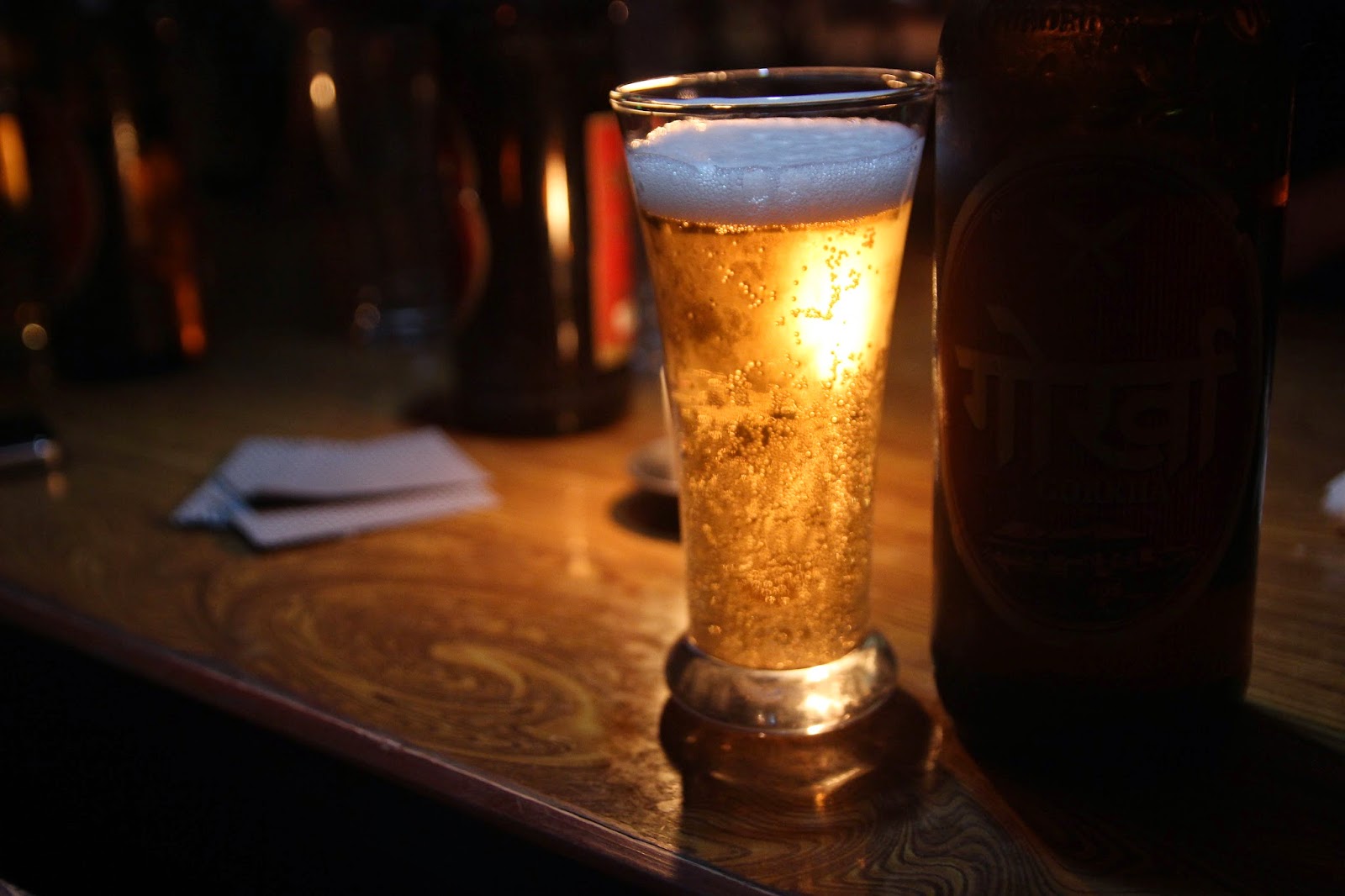 Posted by Outlander Abroad at 12:29 AM