I awoke excited to be leaving Zhangye to make my way to Shanghai that afternoon.  I needed to escape the cold city where I couldn't communicate with anyone, and I was thrilled to meet up with a friend from the States in Shanghai - a familiar face that I had known for years, a person I could actually have a proper conversation with.  I packed my bag and went downstairs for breakfast, except that there was no one working in the breakfast area.  When I asked the staff, they just responded with, "no".  I went into the restaurant area anyway, which was strewn with dirty plates and ashtrays (despite the no smoking signs), and walked up to the small bar that served as the kitchen.  It was similarly filthy, full of containers of food sitting out, a couple of hot plates and dirty pans, one with a pile of oily mushrooms still sitting in it.  I cleaned out a pan as best I could and used it to make toast, finding a couple of hard boiled eggs that I ate with it.  No one at the hostel seemed to notice or care.

I checked out around noon, stowing my bag and catching a bus into town to visit the Temple of the Giant Buddha in a plan to kill some time until my flight that afternoon.  I had to wander a bit and ask for directions, but I eventually found the actual entrance, down a narrow, tree-lined street.  I entered the temple complex and walked straight up to the primary temple where the Buddha was housed, which truly was impressive - the clay figure nearly as long (I guessed) as the one I had seen in Bangkok.  Sadly, the room was very dark, so it was hard to take in all the details, especially of the figures directly behind and on either side of the Buddha.  The walls also had interesting paintings of Chinese figures, and the backside of the Buddha held other smaller images. 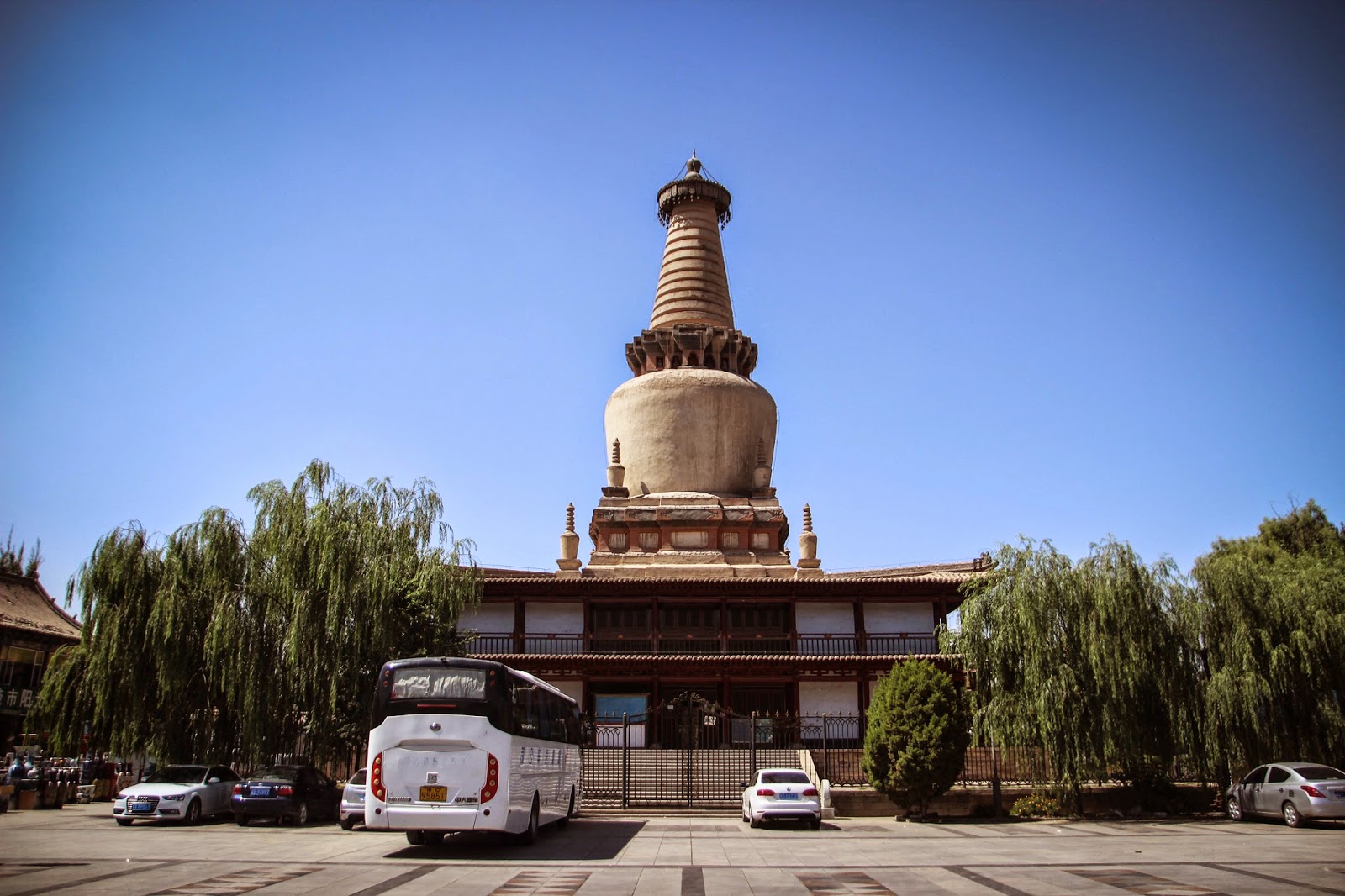 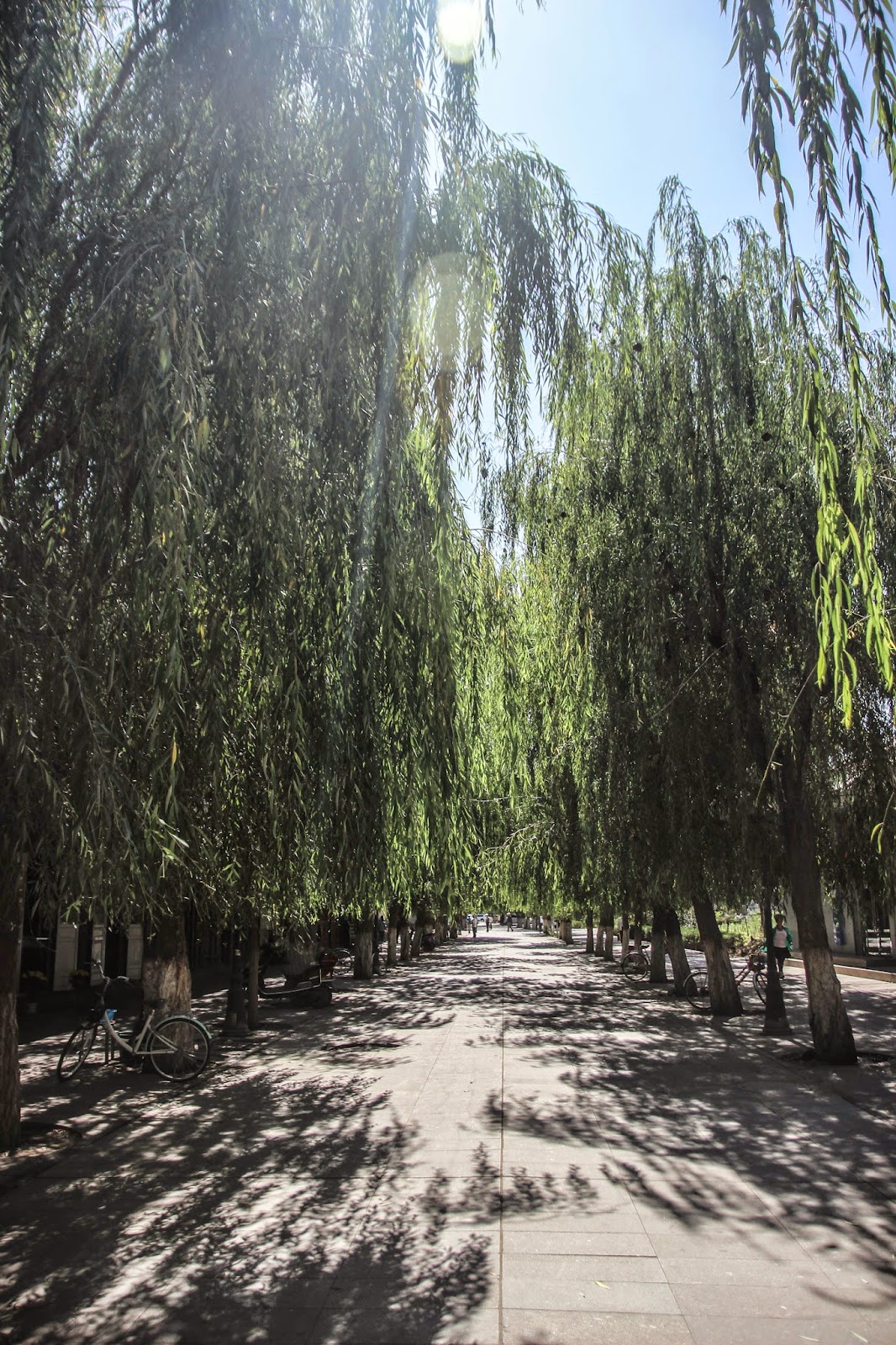 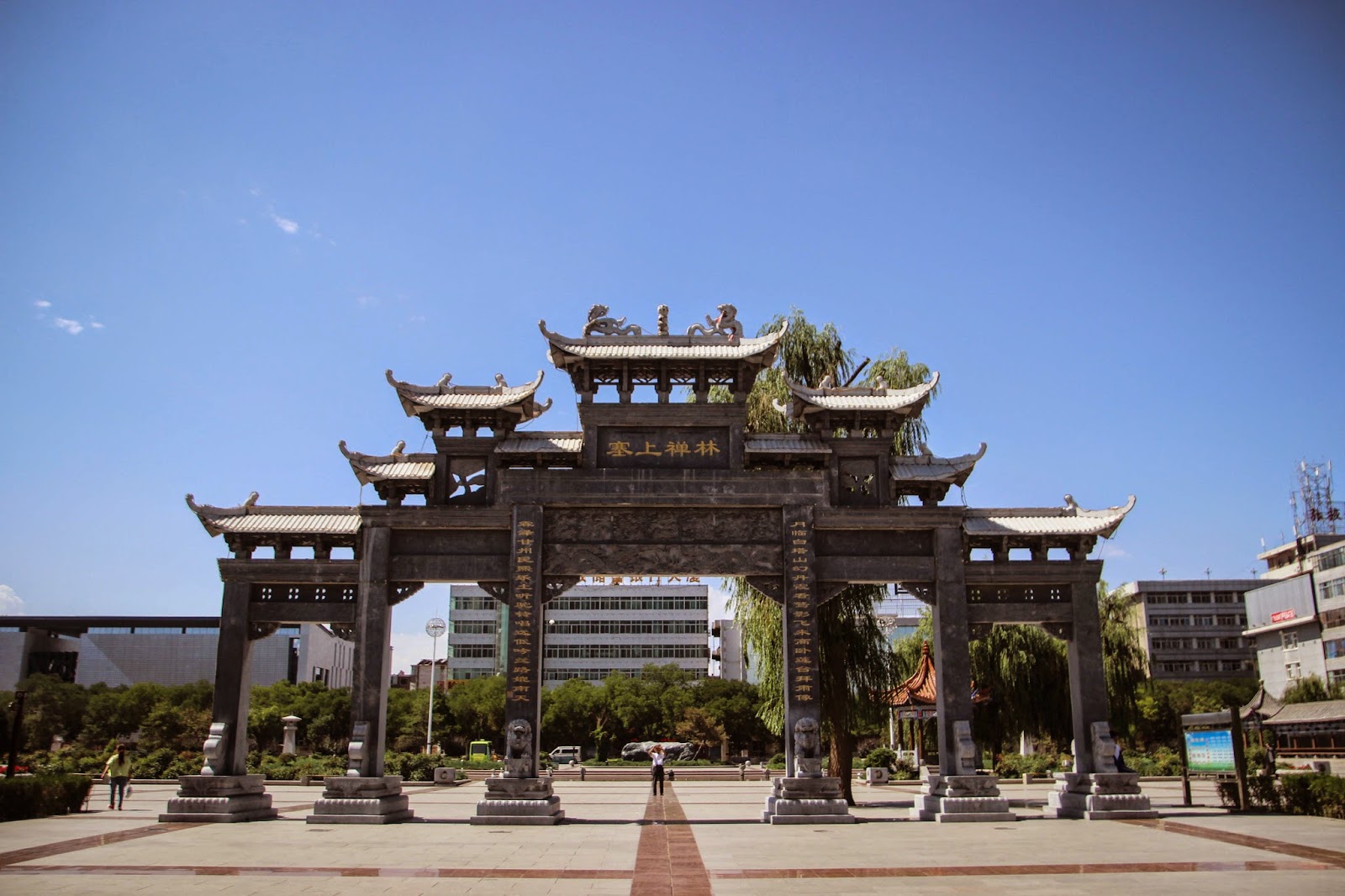 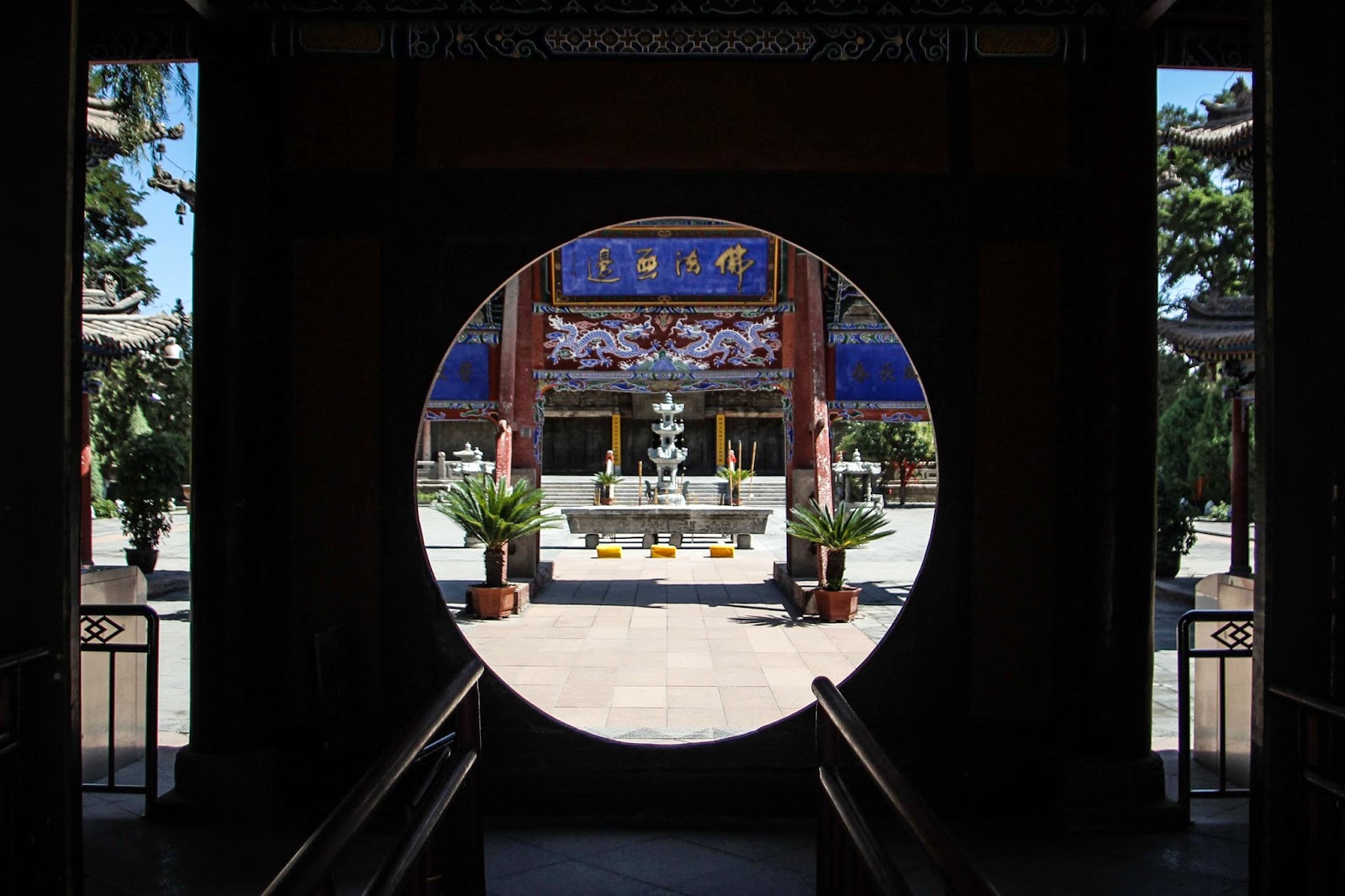 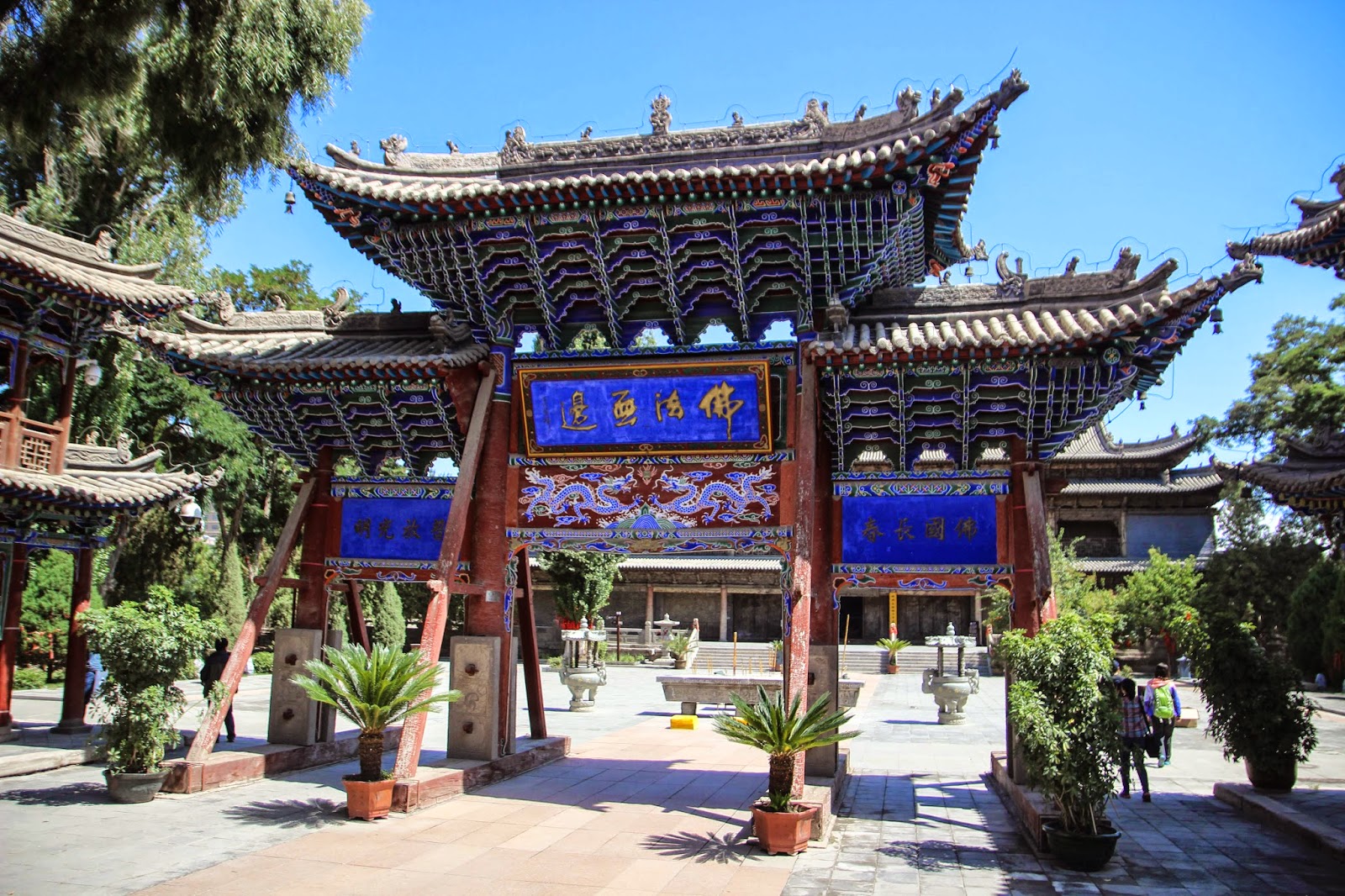 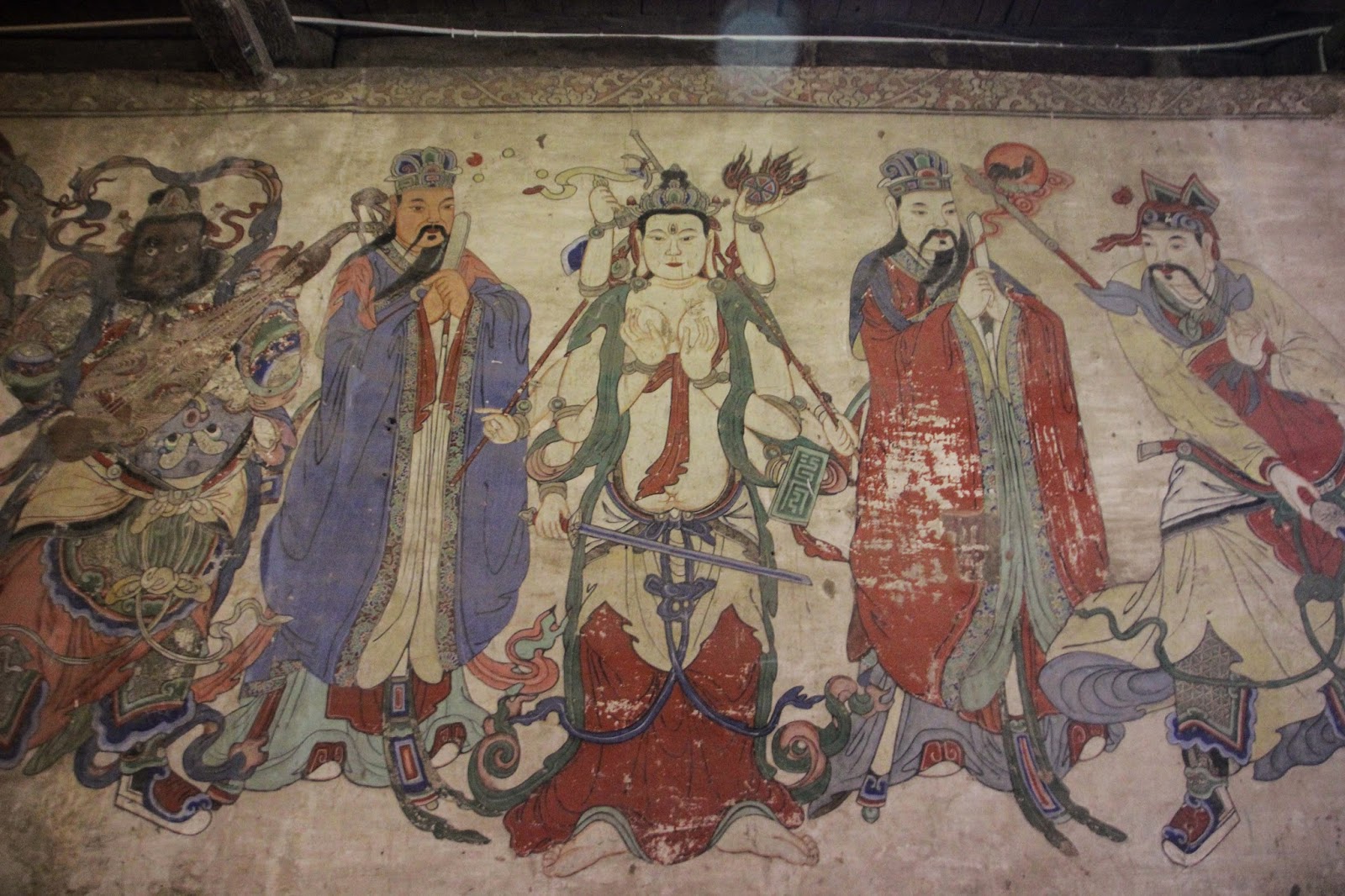 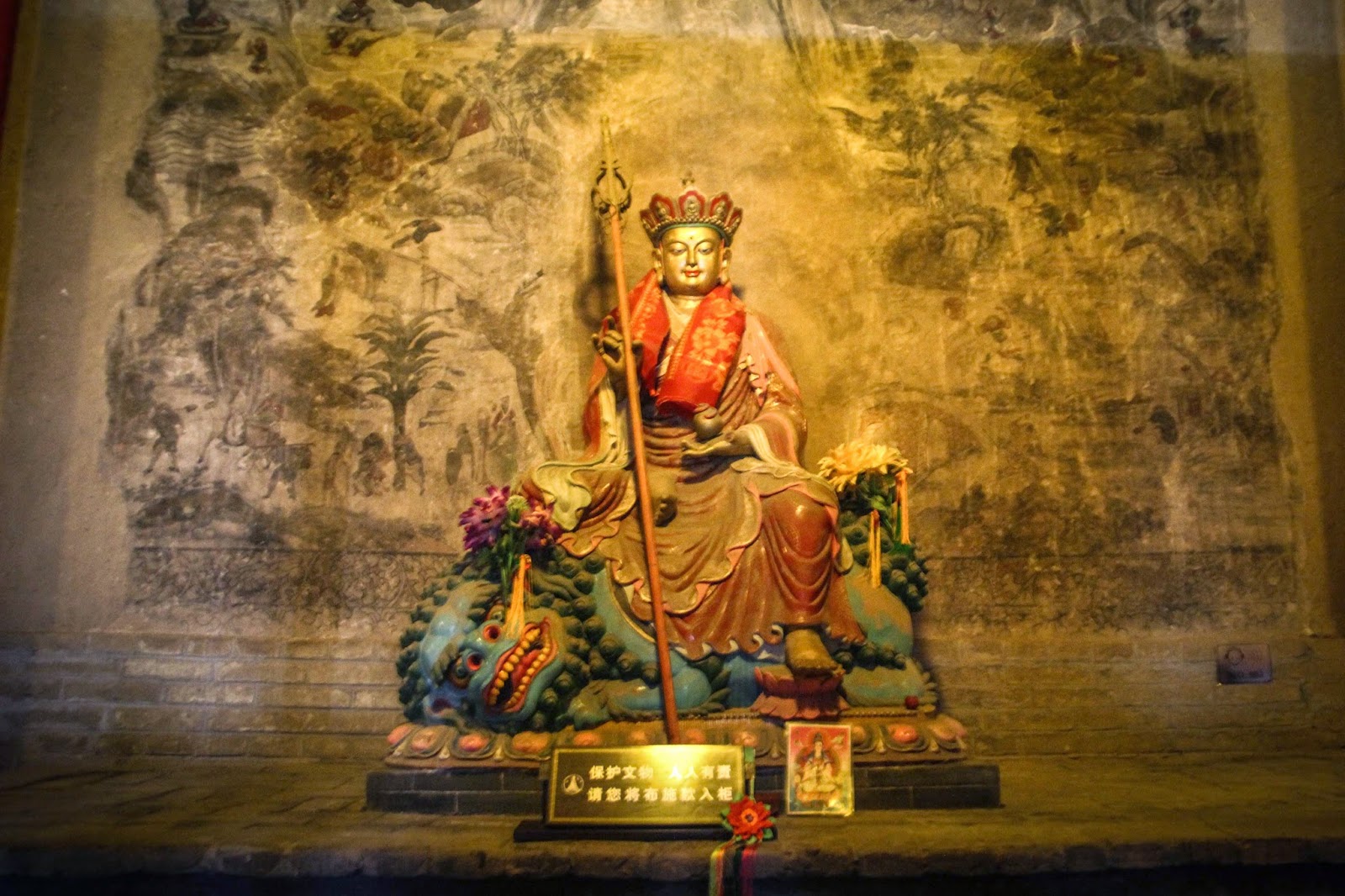 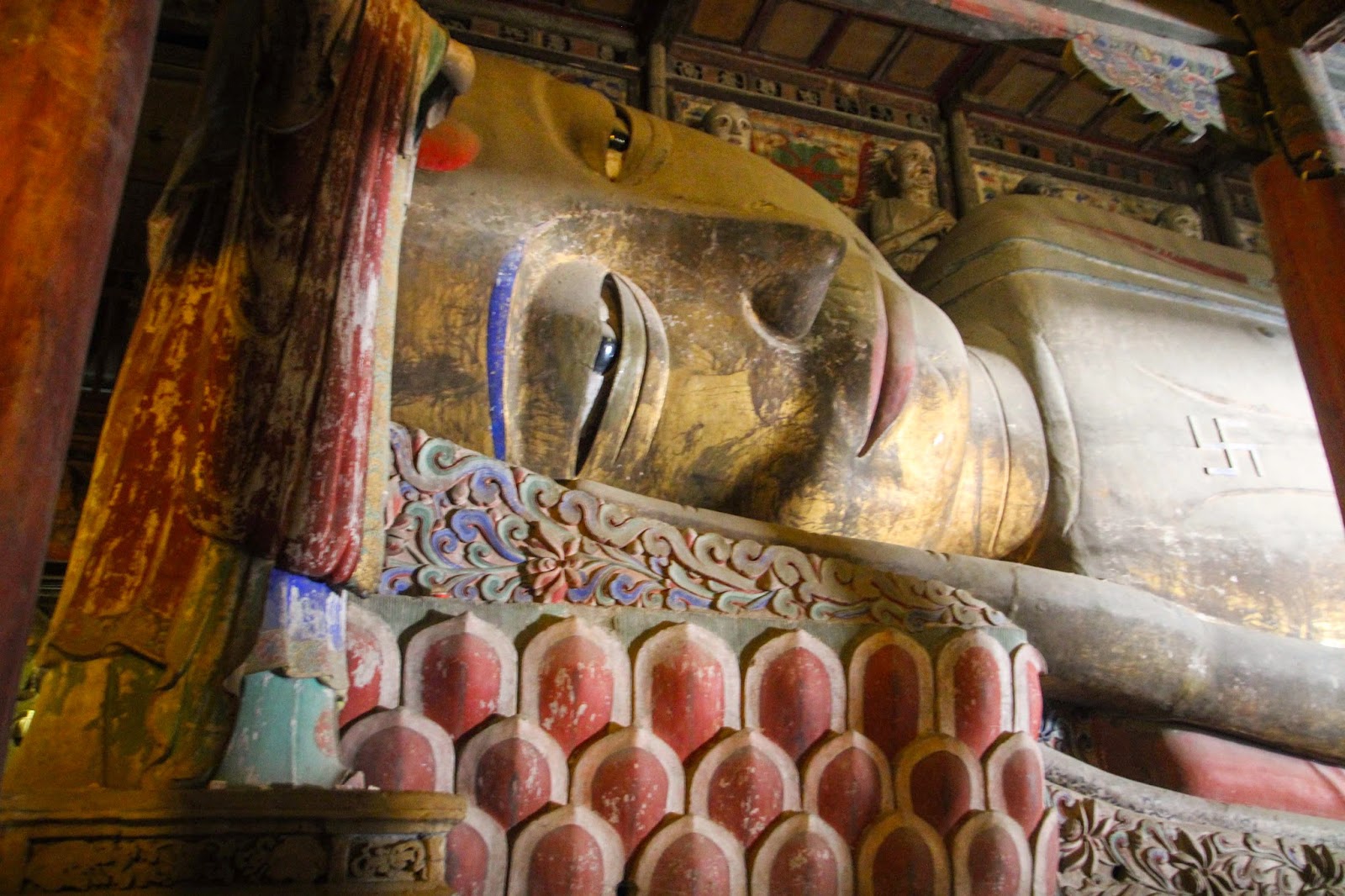 While there were other buildings in the complex, I breezed through them relatively quickly, one holding art, the other calligraphy.  I meandered slowly through the complex, filled with trees and small benches, settling onto one space for a bit to write until a man's loud spitting and talking eventually drove me away.  I left, making my way back out to the road to a cafe I had spotted earlier, knowing I had plenty of time before my flight.  I sat down in Cheng Bang Coffee, delighted that it was empty (no smoke!), that they had cappuccinos, and that they had a menu with photos on it!  I ordered some simple fried rice and a cappuccino, pulling out my laptop to write and even taking some time to FaceTime on their wifi.  I paid the bill and exchanged messages with my friend in Shanghai about logistics, then I caught the bus back to the hostel, still a pretty good way outside of the center of town. 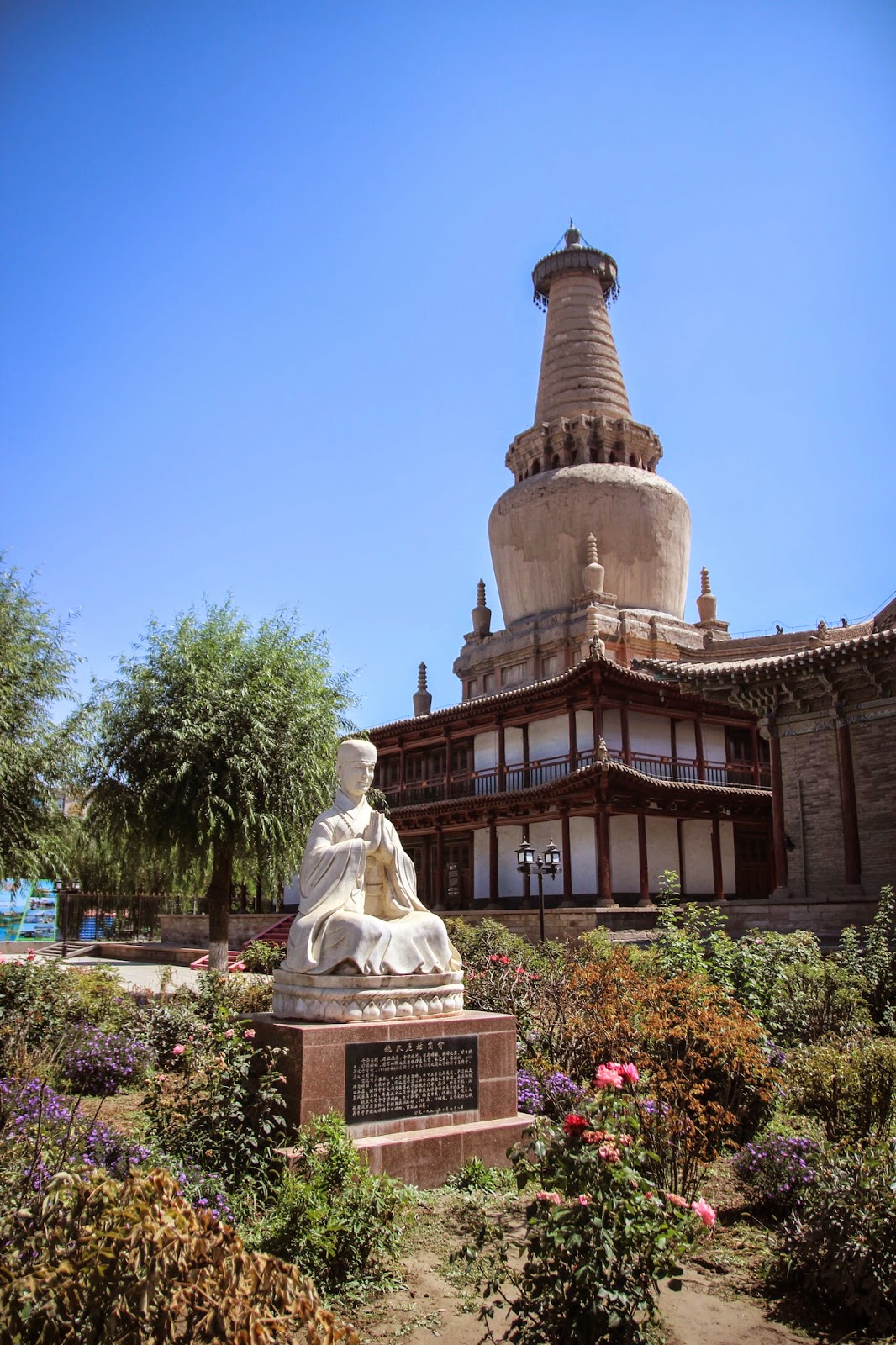 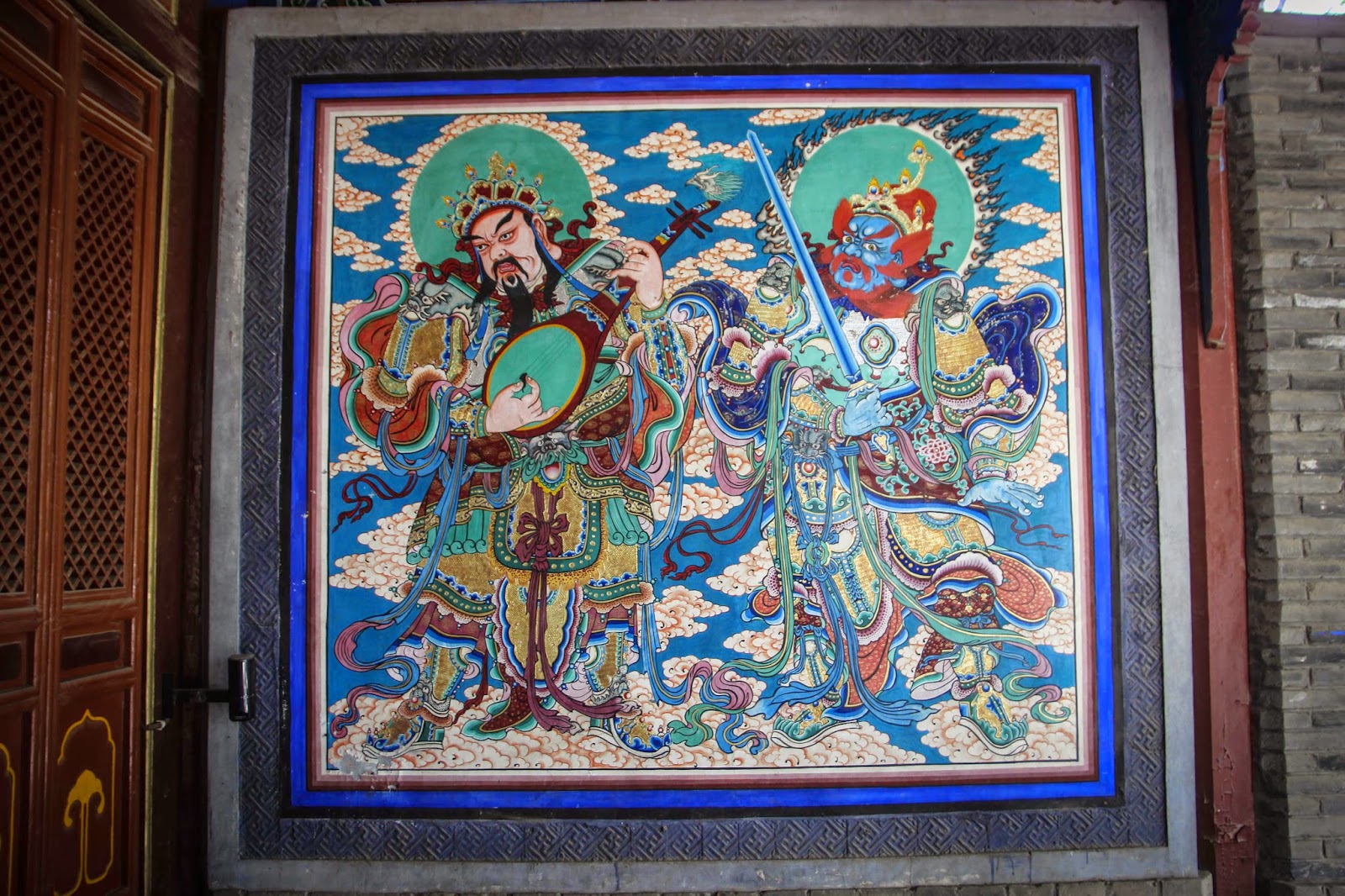 It was then that it dawned on me.  I glanced at my flight info and had the horrifying realization that the flight left at 17:55.  Not 7:55.  And it was already 5:20.  After the slowest 10 minute bus ride in history, I dashed into the hostel to grab my bag, then wasted precious seconds trying to flag down a taxi until the hostel manager recruited a driver for me (for twice the normal rate).  I got in and we went, but traffic at 5:30 made the drive excruciatingly slow.  As we got closer, I offered up silent prayers for delays, slowly feeling hope slip away as we neared the airport.  It wasn't until we arrived though, at 6:10 and exactly 15 minutes after departure time, that I started to break down.  The doors of the tiny airport were locked.  The one flight of the day was gone.  I was stuck in the town I had wanted to leave the day before for an entire other day, and I only had myself to blame.

To make things worse, my driver found the whole thing absolutely hilarious, pointing and laughing at me when we encountered an airport employee who confirmed that yes, the flight was long gone and no, there were no other flights.  I borrowed the phone of the employee, calling eLong to cancel the flights to collect any refund I could, and get information on flights the following day.  Thankfully, the eLong representative I spoke to was incredibly helpful, managing to get me partial refunds on both flights as last-minute cancellations, and giving me times and prices for options the following day.  Initially I just told my driver to take me to the train station, though I'm pretty sure he didn't understand what I actually said.  I eventually borrowed his phone to call eLong back and just rebook for the following day.  I estimated my losses at about $250, but the train would have arrived only a couple of hours prior to the flight, wasn't guaranteed to have seats, and probably wouldn't have been that cheap anyway.  I showed the driver a post-it note with the hostel name and address in Chinese just to confirm that I did want to go back there (again, pretty sure he had no idea I had even asked to go to the train station instead), and he managed to sideswipe a guardrail attempting to read it.  Lovely.

We finally made it back, and my driver continued laughing at me, telling the entire staff of the hostel about how hilarious it was that I had made him drive all the way to the airport and missed my flight.  Thankfully I managed to find the only nice person who worked at the hostel, a person who seemed legitimately concerned and wanted to help, and he gave me a double room for the night for the price of the single I had been staying in (which was now occupied).  I nearly collapsed into the room, mentally drained from the previous few hours.  I did manage to find my way downstairs, thankfully meeting another foreigner - an Israeli girl who spoke a bit of Mandarin.  She was sharing some food with some locals and invited me to join, which I did for a while, until retreating to my room to rest.  I also heard from a fellow-traveler friend who had also misread her flight information and missed her flight.  She was "stuck" in paradise - Hawaii - but the cost to change her ticket - to Australia - was going to be astronomical.  Put in perspective, my situation felt a bit better!

The next morning, I ran into the same scenario with breakfast, when the lady on staff said, "no breakfast" when I inquired.  Through a translation app, I learned that the person who usually makes breakfast was "resting". Unbelievable.  Again, I made my own breakfast, 'borrowing' a pair of hard-boiled eggs and making a couple of pieces of plain toast on a pan.  I ran into the girl I had met the night before, hiding out in the common area, very disturbed because the driver had attempted to make a move on her inappropriately, and she was scared to stay there.  I had no idea what to do in that situation, but I urged her to tell the one kind member of the staff and to connect with friends as soon as she possibly could.

Thoroughly ready to leave, I checked out (again) at noon and caught a cab, negotiating a reasonable fare with the driver to get me to the airport.  Except only a few minutes into the drive, he stopped to pick up someone else!  And he went out of the way to take them to a destination!  I told him my rate had just gone down, he refused, so I got out of the taxi, not paying a cent.  I marched up to the next taxi, agreed on the lower fare immediately, and off we went without issue.  Somehow with all that drama, it still took less time to get to the airport than it had the previous day.


Nearly two hours early - there was NO WAY I was missing my flight this time - I settled in with an expensive cup of coffee and did some writing until the plane arrived.  Less than two hours later, we were in Xi'an.  I was actually too early to check into my next flight to Shanghai, but I waited it out, checking in, dropping my luggage, and settling in at a small restaurant.  I ordered a 'Chinese hamburger' (one of those pockets of flatbread with meat like I had tasted in the Muslim Quarter days prior), and a milkshake, as a Brazilian woman sat down and began complaining directly to me as she had trouble communicating with the waitress, "I speak English, French, and German, in addition to Spanish and Portuguese - five languages is enough!"  Yes, I thought, it can be incredibly frustrating.  But it is their country after all, and we're just visiting.  We have to take the frustrations in stride and enjoy it for what it is.

Posted by Outlander Abroad at 1:16 PM