Three Weeks in Paradise: An Introduction to Indonesia

Somewhere back in Vietnam, there was a small but significant change in my relationship with the man I had visited in Portugal months earlier.  When I had left Portugal, we knew we wanted it to continue in some way, but we didn't really know what that would mean.  How we would feel after months apart.  If we could wait until my travels were over to meet again and see what happened.  But sometime around Vietnam, we had a number of conversations that brought us both to the realization that we wanted to not just wait and see, but really pursue this.  And as a result, he decided to fly all the way to Asia to visit me.  We settled on Bali, planning to spend three weeks exploring and relaxing in paradise, just after my run through China.

Since we were flying in from vastly different places, I arrived the evening before João.  While the flight with Philippine Airlines was quite nice - they showed a movie and even asked the tallest, largest people on the plane if they would like to have the exit row - the layover in Manilla was borderline awful - long bathroom queues, no wifi, and they only accepted local cash - no cards - so I couldn't buy any food or water.  Then upon arriving into Bali, customs agents searched every inch of my luggage and scrutinized my passport, curious as to why I had made so many trips in and out of Thailand (because it's logistically convenient?).  Though I was tired and delirious, as it was well past midnight at this point, I joked around with the one officer who could speak English, teasing the other officer who struggled to get all of my personal items back into my over-stuffed bag.  Thankfully, I had booked a few nights on points at a Marriott Courtyard resort at Nusa Dua to begin this experience as a proper vacation.  As my taxi neared the property, even in the dark, I could tell that we had entered what felt like a gated community, with trimmed and manicured grasses and hedges, and huge statues in every roundabout.  Entering the hotel, I was given tea and shown my room, where I collapsed into the massive, comfortable bed, slowly falling into a deep, restful sleep that I had been desperately needing after the last few weeks.

I awoke nervous and excited for João's arrival, and I spent the day slowly exploring the resort "neighborhood".  There were other resort properties in this same section of the island, with separate beach access points and a shopping center within the "grounds" where I picked up a new bikini and a few essentials.  That evening, I booked a taxi to the airport - with a driver named Elfin - and though I brought a book to read as I waited, I kept my eyes glued to the gate where he would be arriving.  An hour passed, as taxi drivers jockeyed for position, shouting names of the people they were supposed to pick up, in hopes that the person who just walked out of customs was their passenger.  After another half hour, just as Elfin came to ask if he had arrived, I spotted him.  He saw me and smiled, starting towards the duty free store that the exit forces passengers through, then hesitated, coming straight to me for a brief but strong kiss, before we met at the exit for a proper embrace, then held hands in the taxi, in total disbelief that he was actually there, in Bali, and we were together again.

The next couple of days flew by, as we rented cruiser bikes from the hotel and took advantage of the gorgeous private beach, set in a quiet cove with small waves breaking in the distance.  We had a fantastic dinner at the shopping center, in a restaurant called Frangipani, tasting delicious pork grilled on skewers of lemongrass and sampling a local white wine.  We treated ourselves to a heavenly foot massage.  We got in a workout at the hotel gym, and we relaxed in the gorgeous pool, making friends with a man from Egypt and his wife from Iran.  We had a tasty if awkward dinner at the hotel, as a group having a meeting replaced the peaceful music with long speeches into a microphone.

We actually hoped to spend another night at the hotel, where everything was expensive but easy, but it was fully booked up for just that one night.  And so we left the next morning without a real plan, catching a taxi to a dive shop in nearby Sanur on the eastern side of Bali in hopes that we could figure out diving options and where to stay.  We wound up at Crystal Divers, and after a quick stop at a small hole-in-the-wall restaurant for cheap, delicious local food, we went wandering down to and along the beach.  We passed resorts and private villas, little statues with tiny offerings, all with views of the far off ocean breaks against the reef.  We spotted a little cafe with a sign about a weekly dance performance at an adjoining restaurant, so we wandered through a long walkway, past a gorgeous garden full of frangipanis and other flowers, a tall statue with a little pond, numerous smaller statues, and a pool, before finally arriving at a reception area for a hotel and restaurant.  On a whim, we inquired about room prices, and we were happily surprised at how affordable it was.  We immediately moved into the Laghawa Hotel, what would become one of our favorite little spots on the island.  And it was a good thing, because we wound up staying in Sanur much longer than expected due to some challenges with our planned diving schedule!  But I'll share more about our diving experience next time. 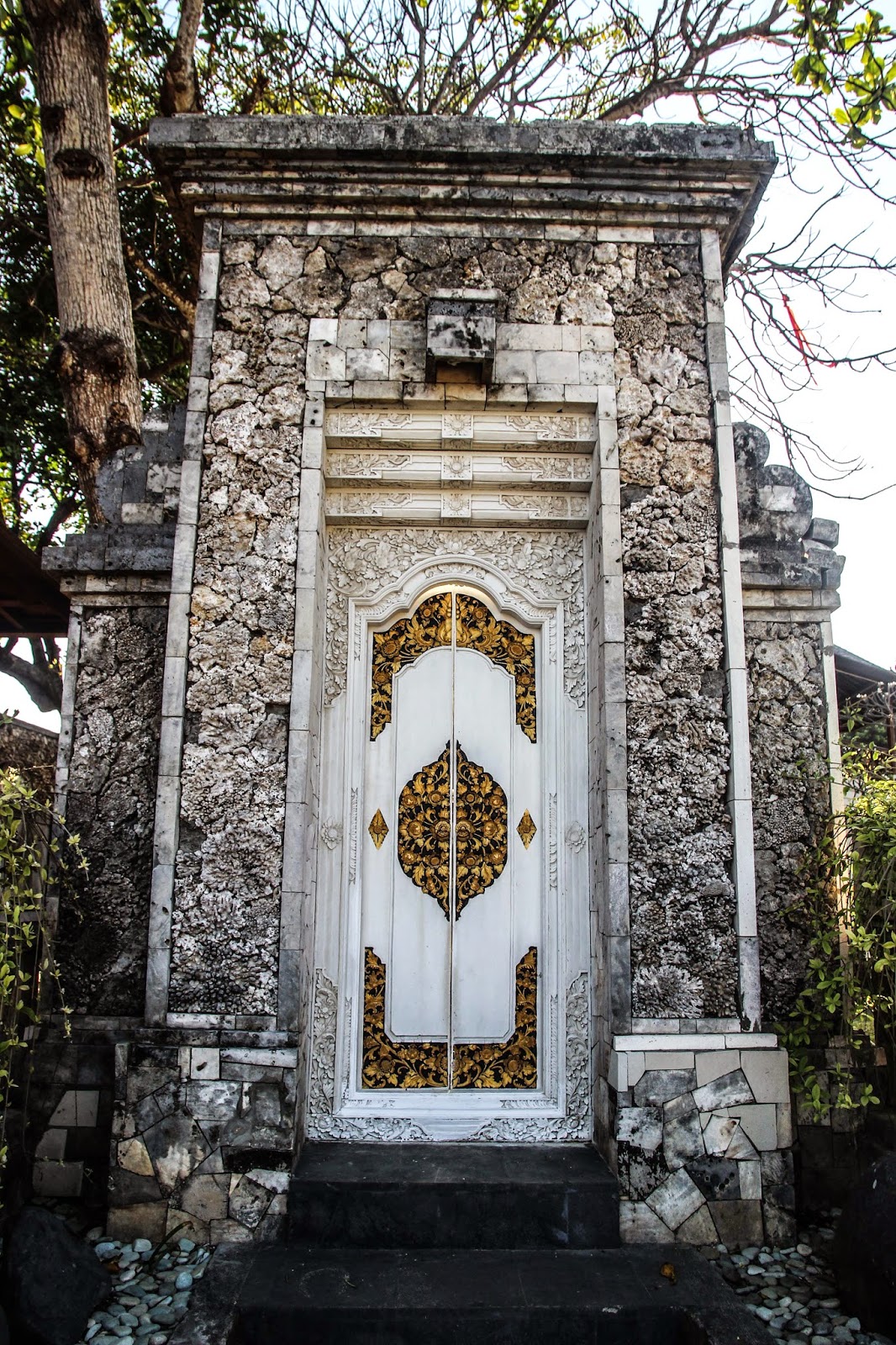 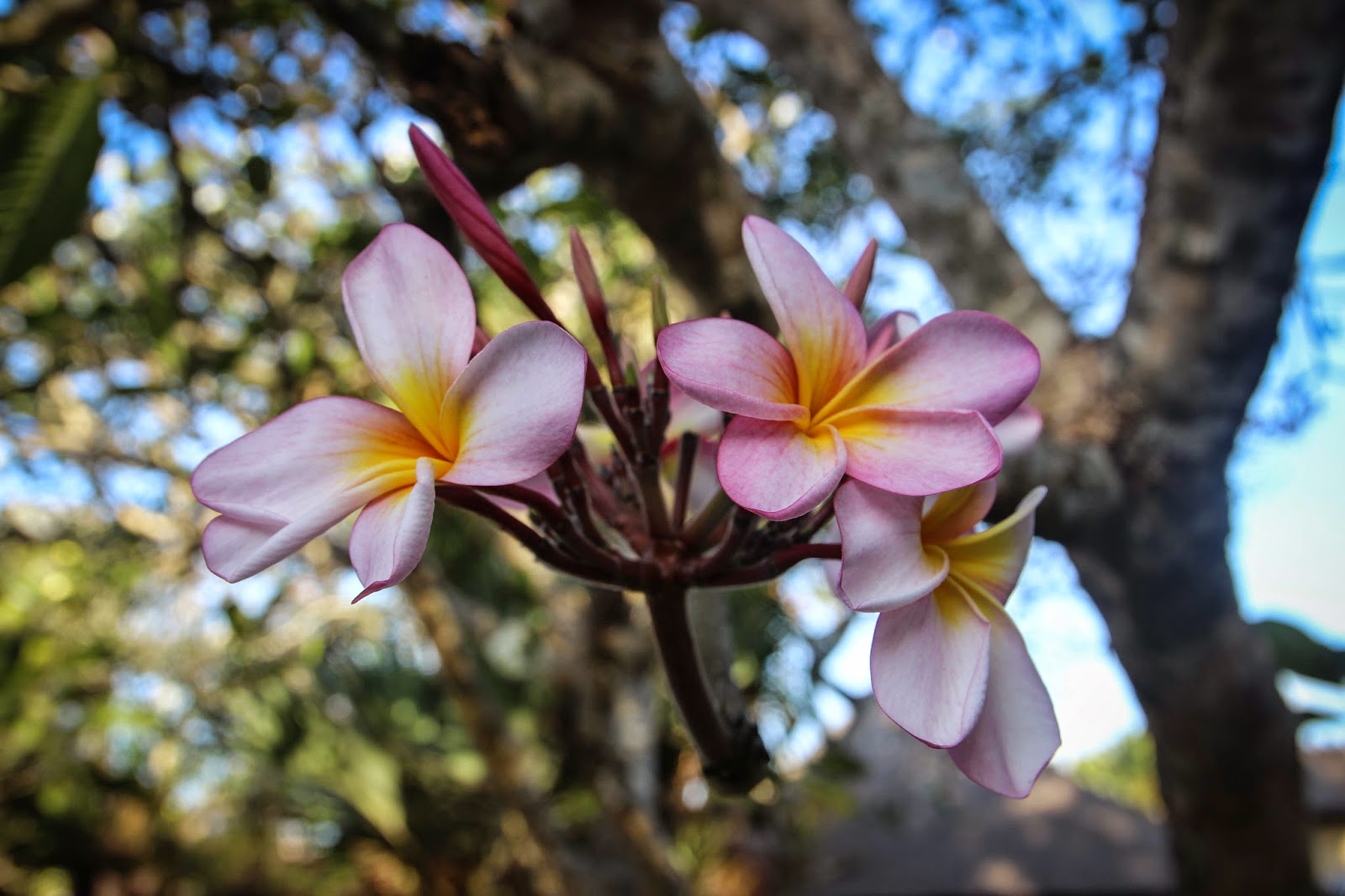 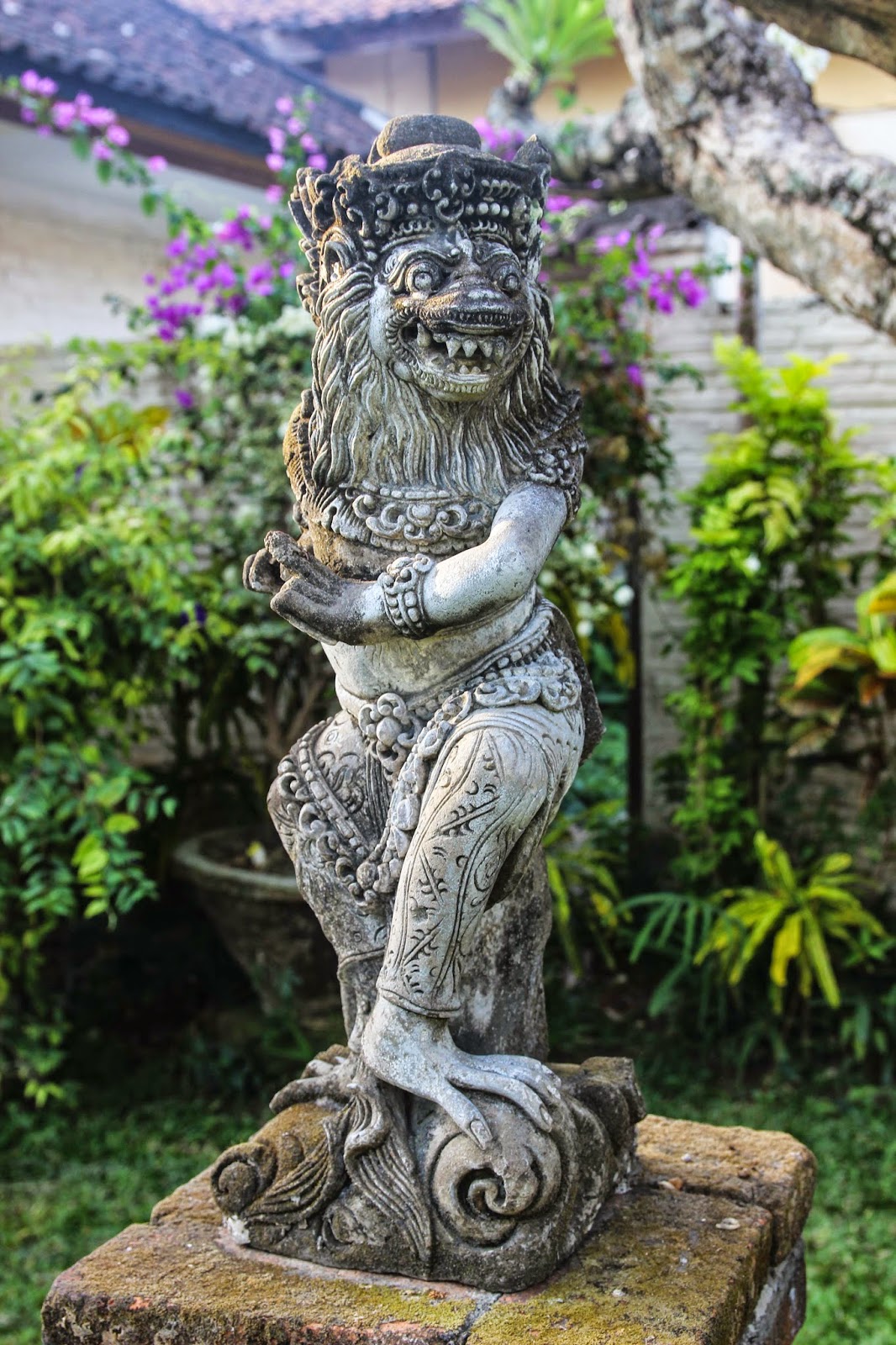 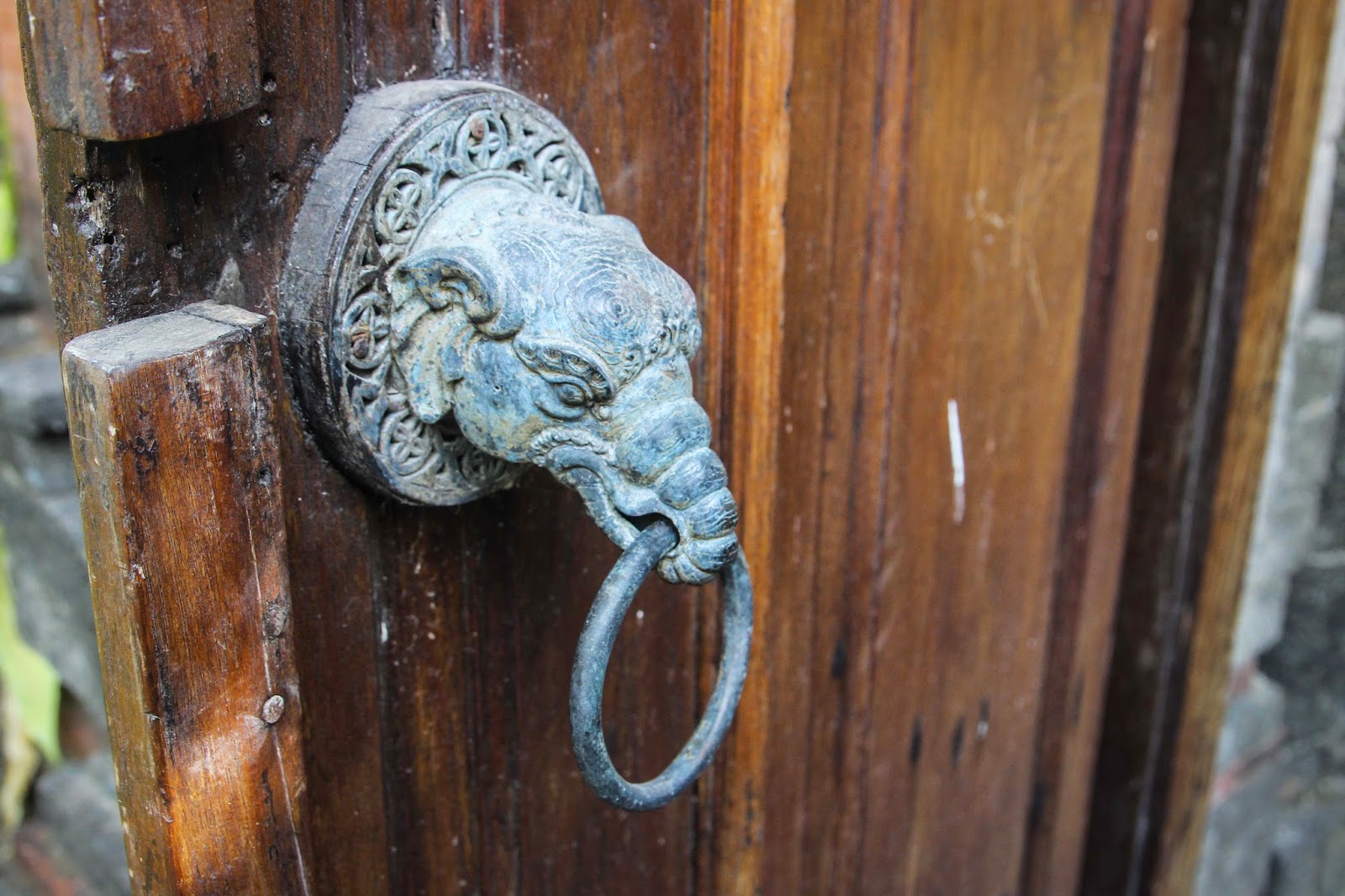 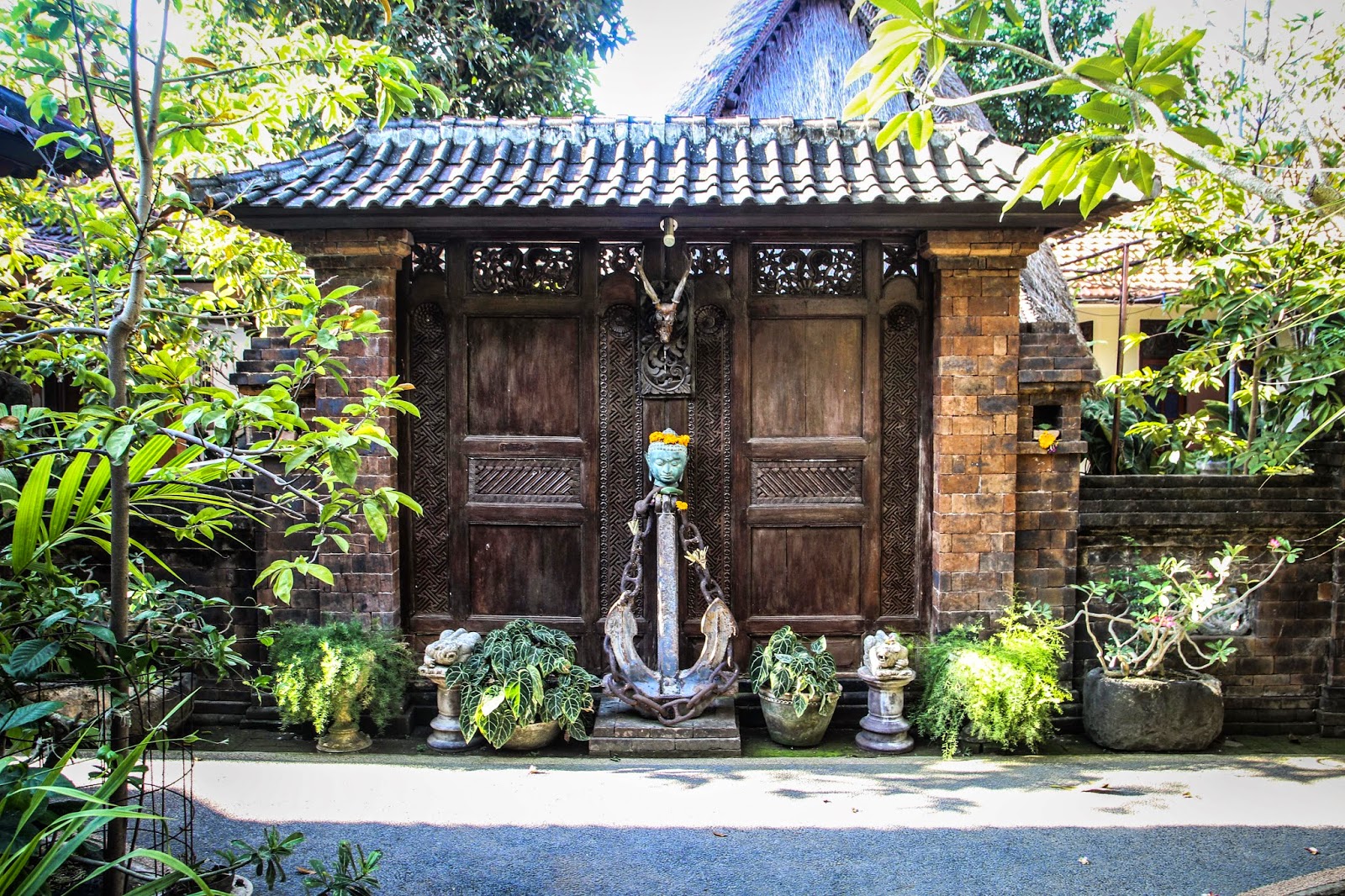 Over the next few days, we relaxed and waited, we took courses, and we had incredible dives.  We also visited as many restaurants within a walkable distance as possible.  A nearby place called Terracotta had okay food, but the absolute nicest waitress, who told us about a Balinese holiday happening that evening.  We later spotted dozens of men and boys dressed in near identical, all-white shirts, long sarongs, and head wraps.  We had tasty curry and satay and You and Me Cafe, and sampled their crispy duck another evening.  Batujimbar was a fresh little cafe where we made frequent visits for salads and fresh fruit blends, though one Sunday they also held a local market where we sampled small bites of local specialties.  And our absolute favorite spot was a tiny gelato stand called Gelato Secrets, with unique flavors like cinnamon dragon fruit, ginger lime, apple pie, chocolate with candied orange peel, and salted butter caramel.  (There was also a location in Ubud, where we found roasted banana with cinnamon, and even a durian flavor!) 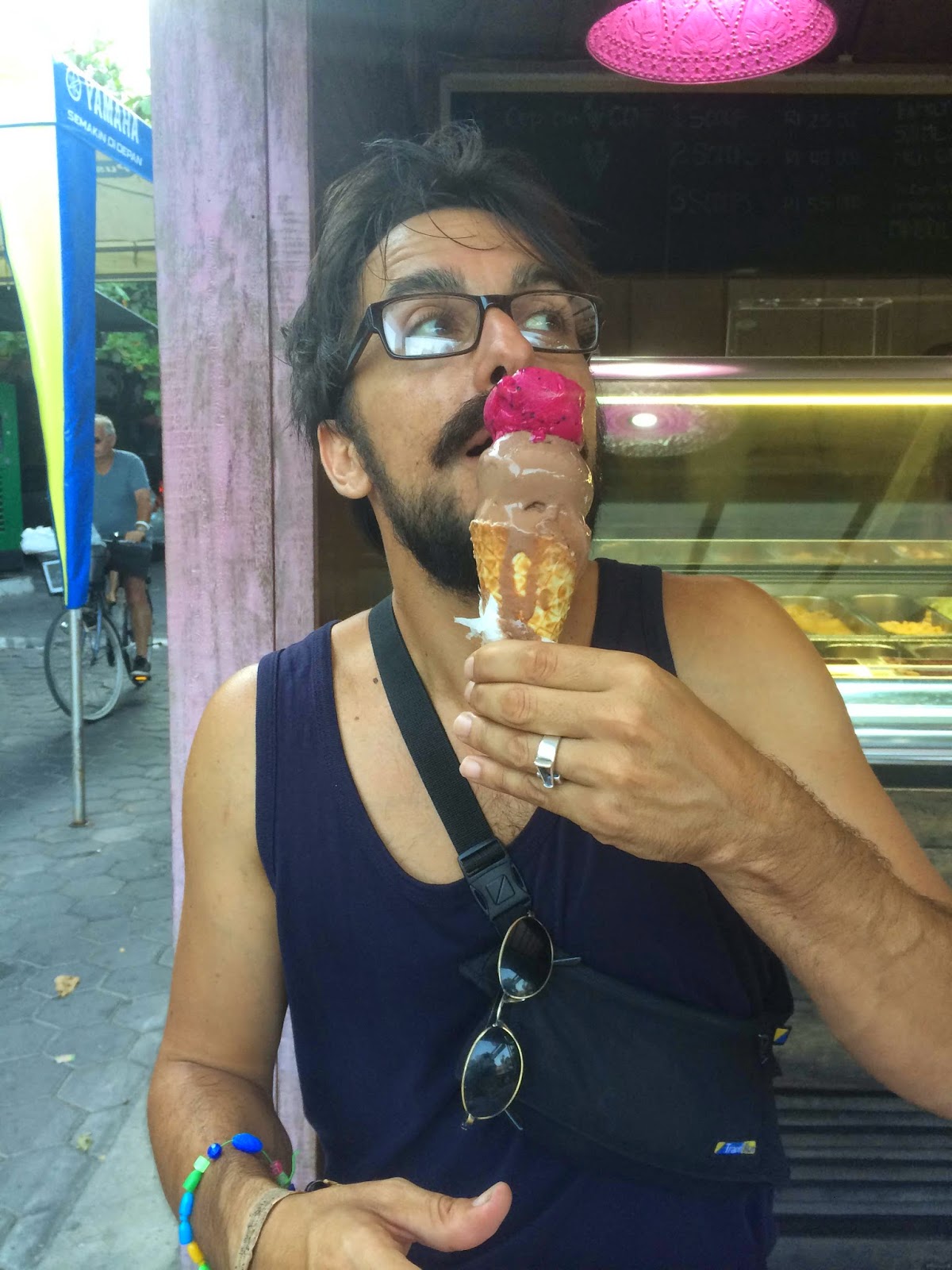 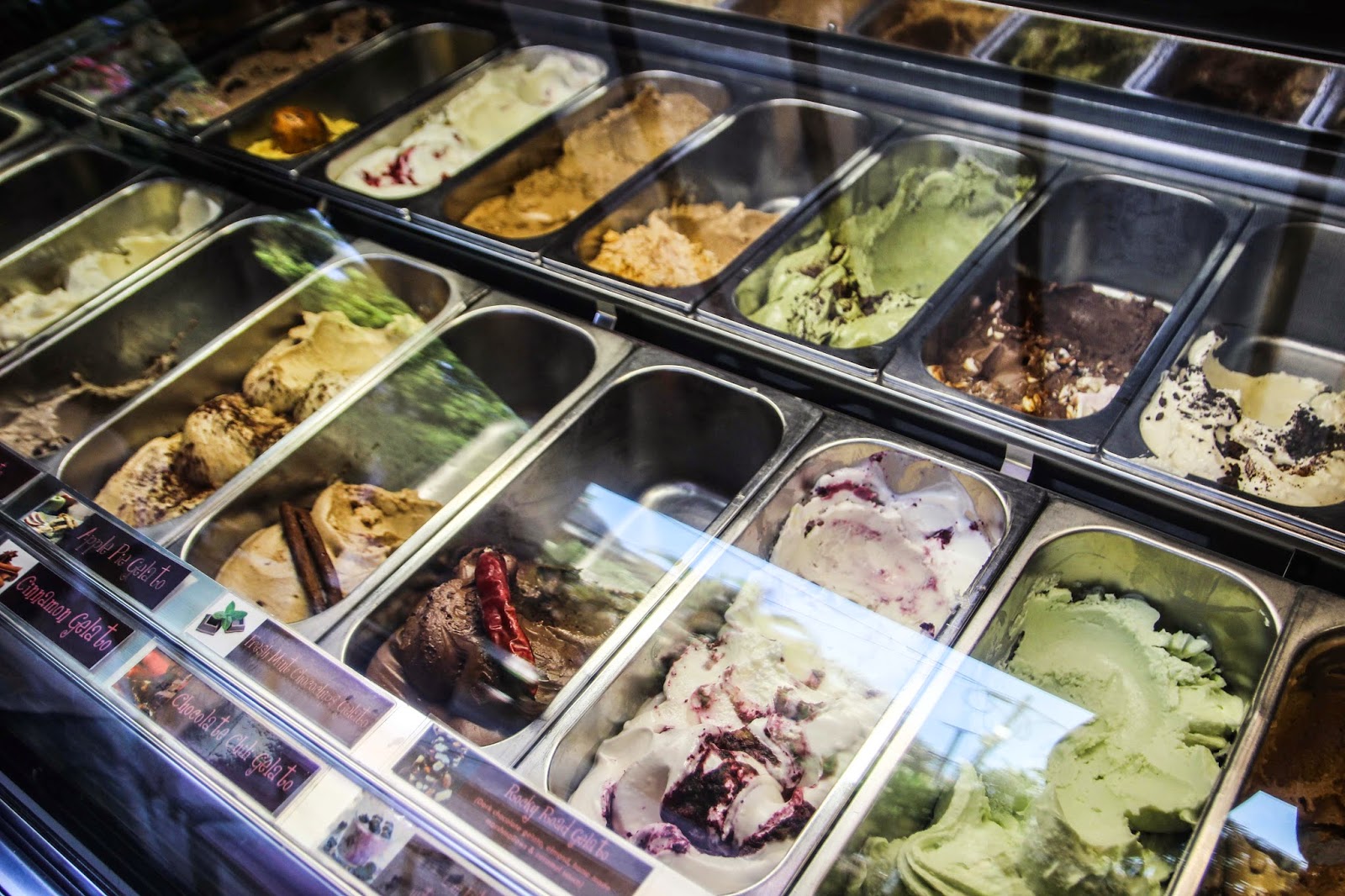 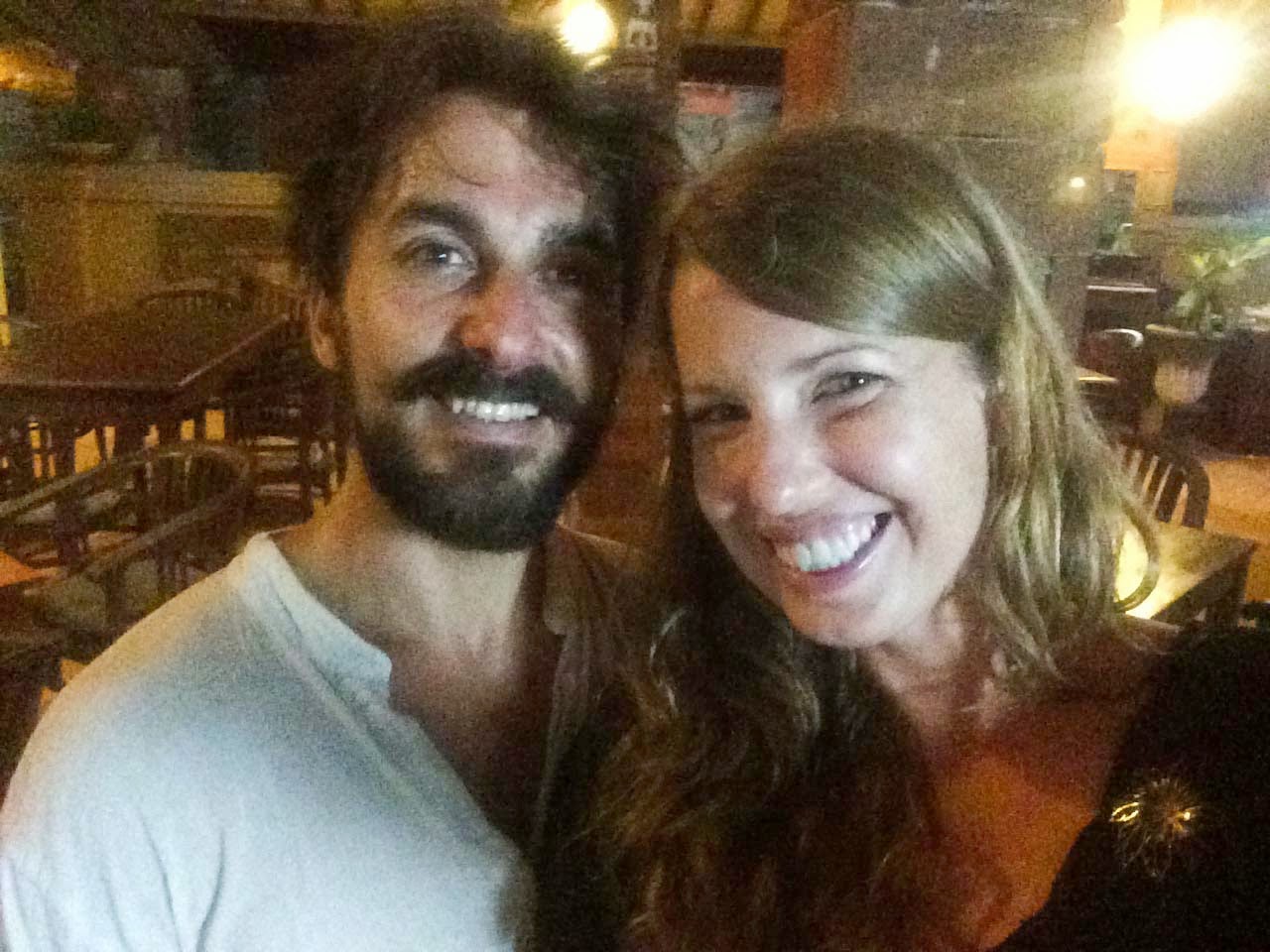 We also fully enjoyed the beach, relaxing on cozy chairs, sipping coffee, dipping into the calm water, and soaking in the sun, João often painting small watercolors as I read.  João also bought a black pirate ship kite from a beachside vendor, an appropriate gift for someone I affectionately refer to as my pirate.  We stayed late one evening drinking mojitos and taking in the colors of the reflected sunset, the clouds appearing as pink and purple tufts of cotton candy.  We stayed a while that evening, having long conversations under a blanket of bright stars and occasional fireworks from a distant resort.  We awoke early one morning to view the sunrise as well, sleepily cuddling on one of the beach chairs as the sky slowly brightened, brilliant colors of red and orange, with purple clouds and light reflecting off the glassy water. 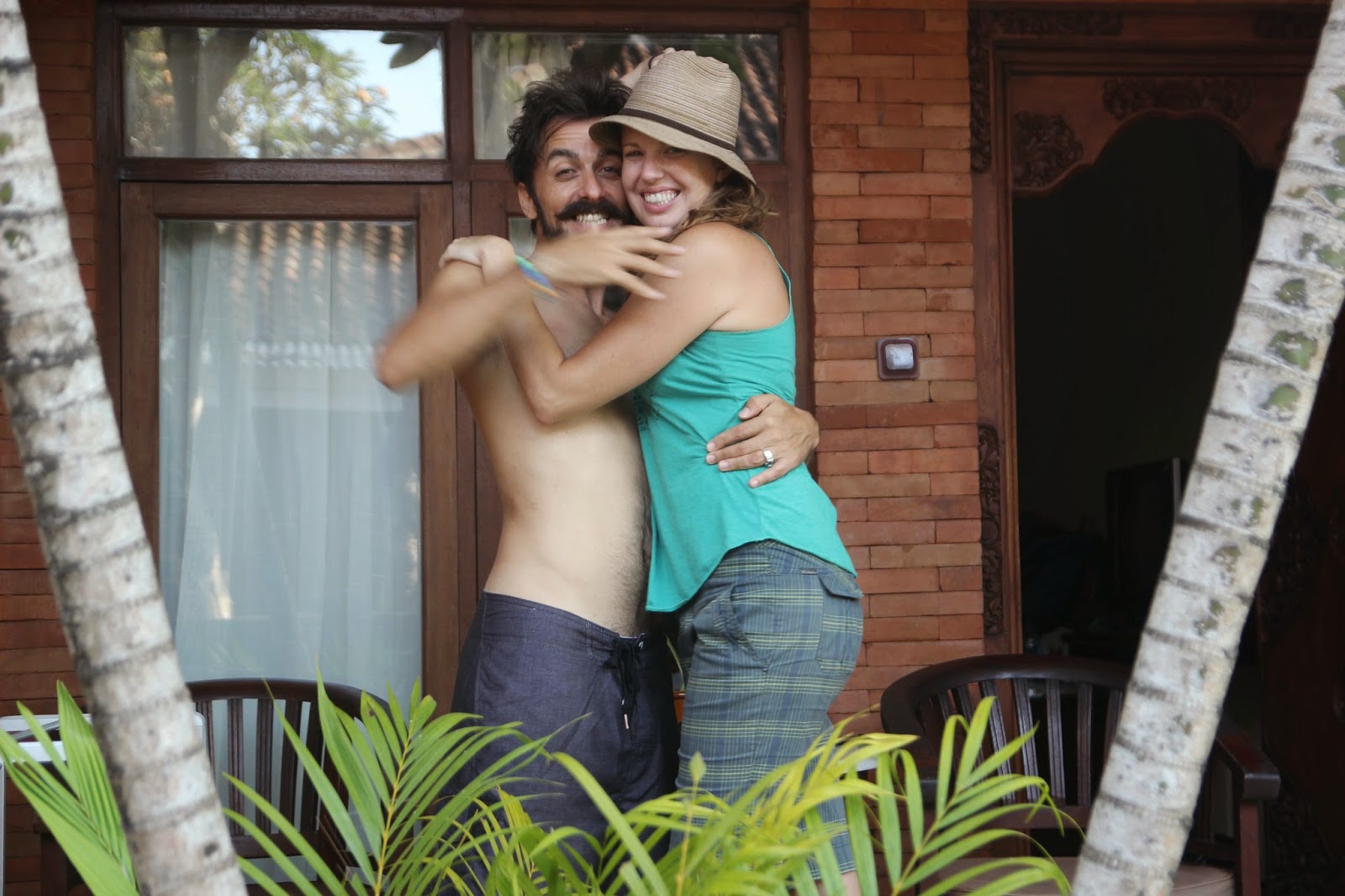 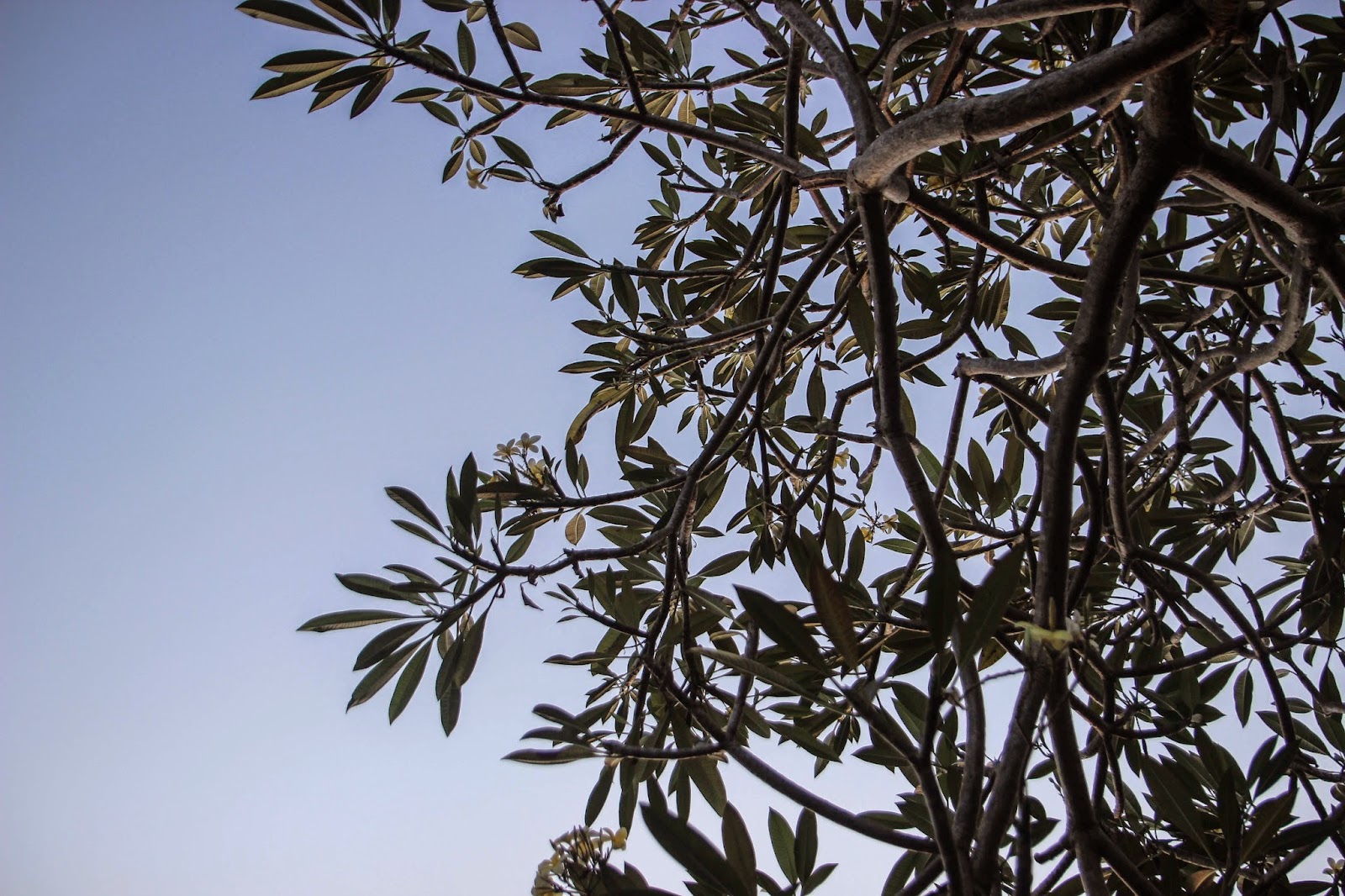 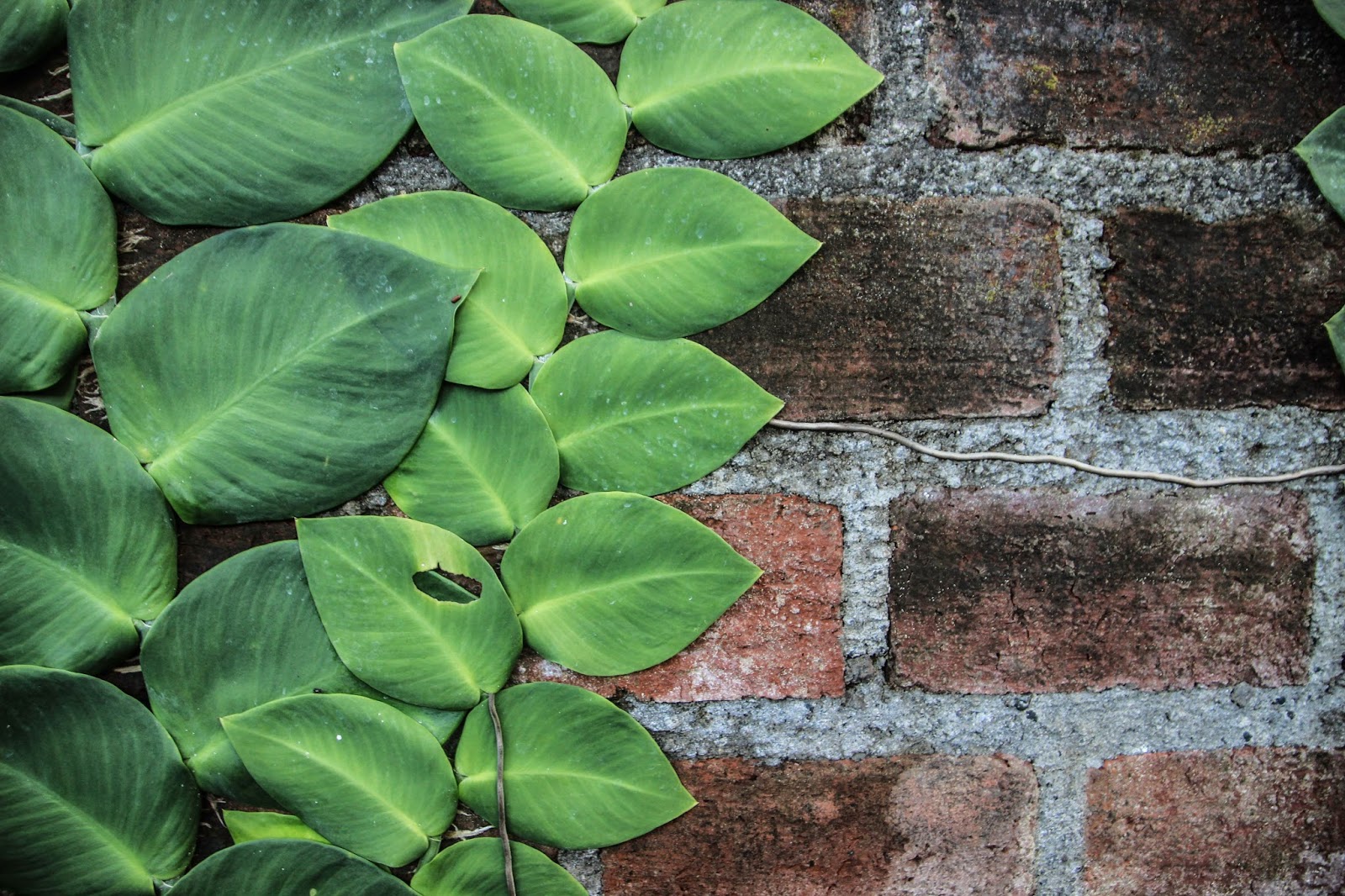 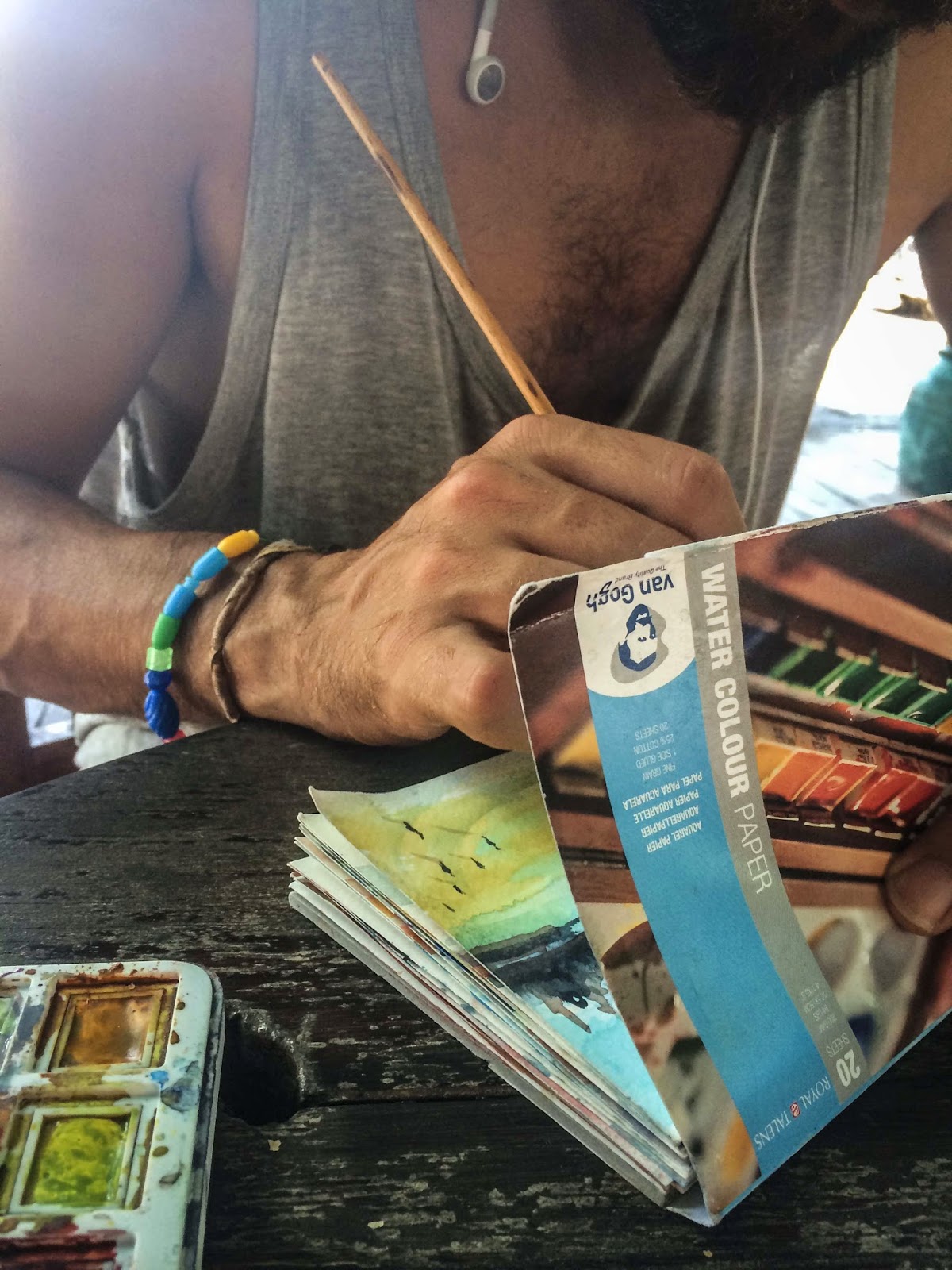 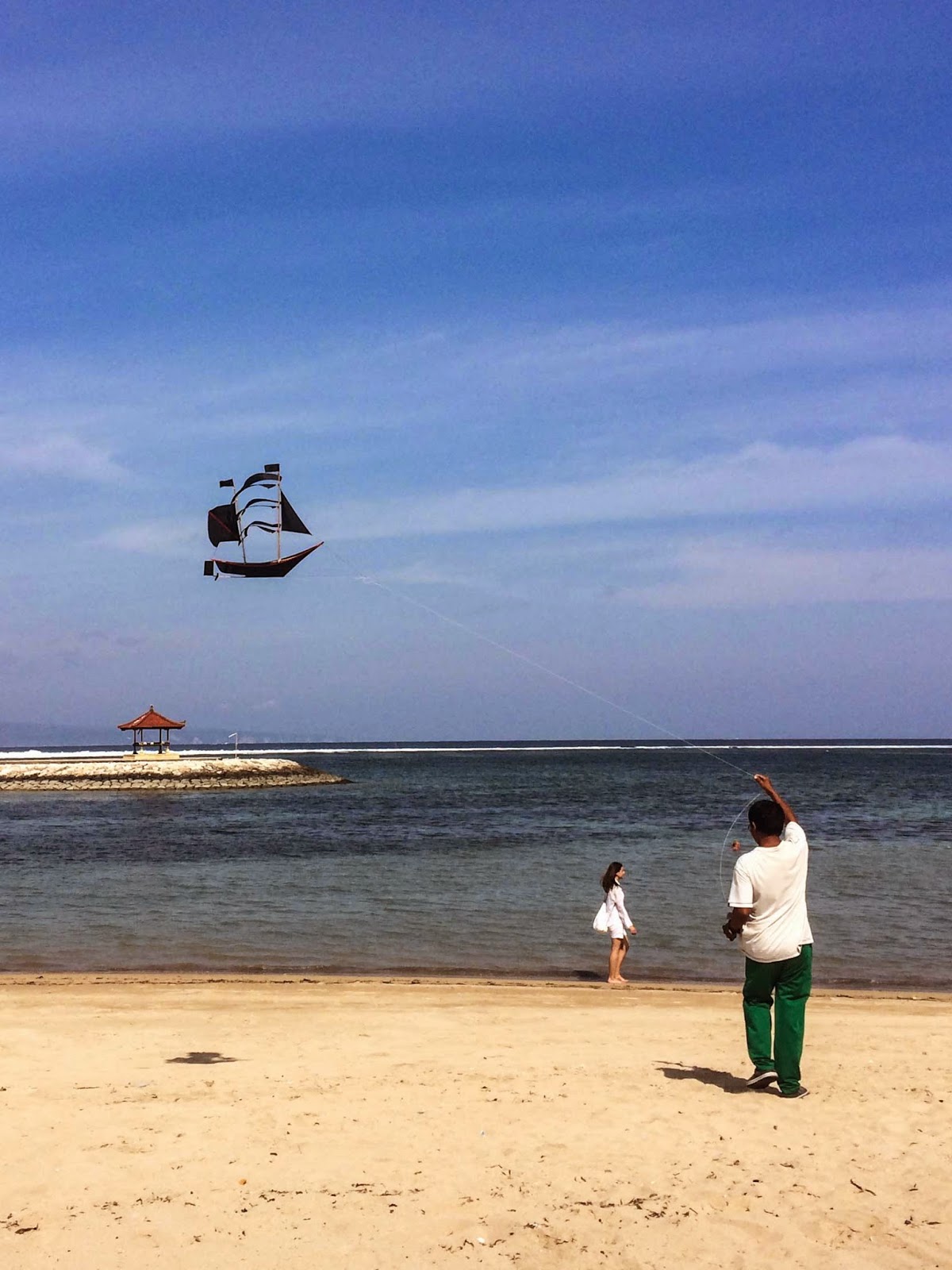 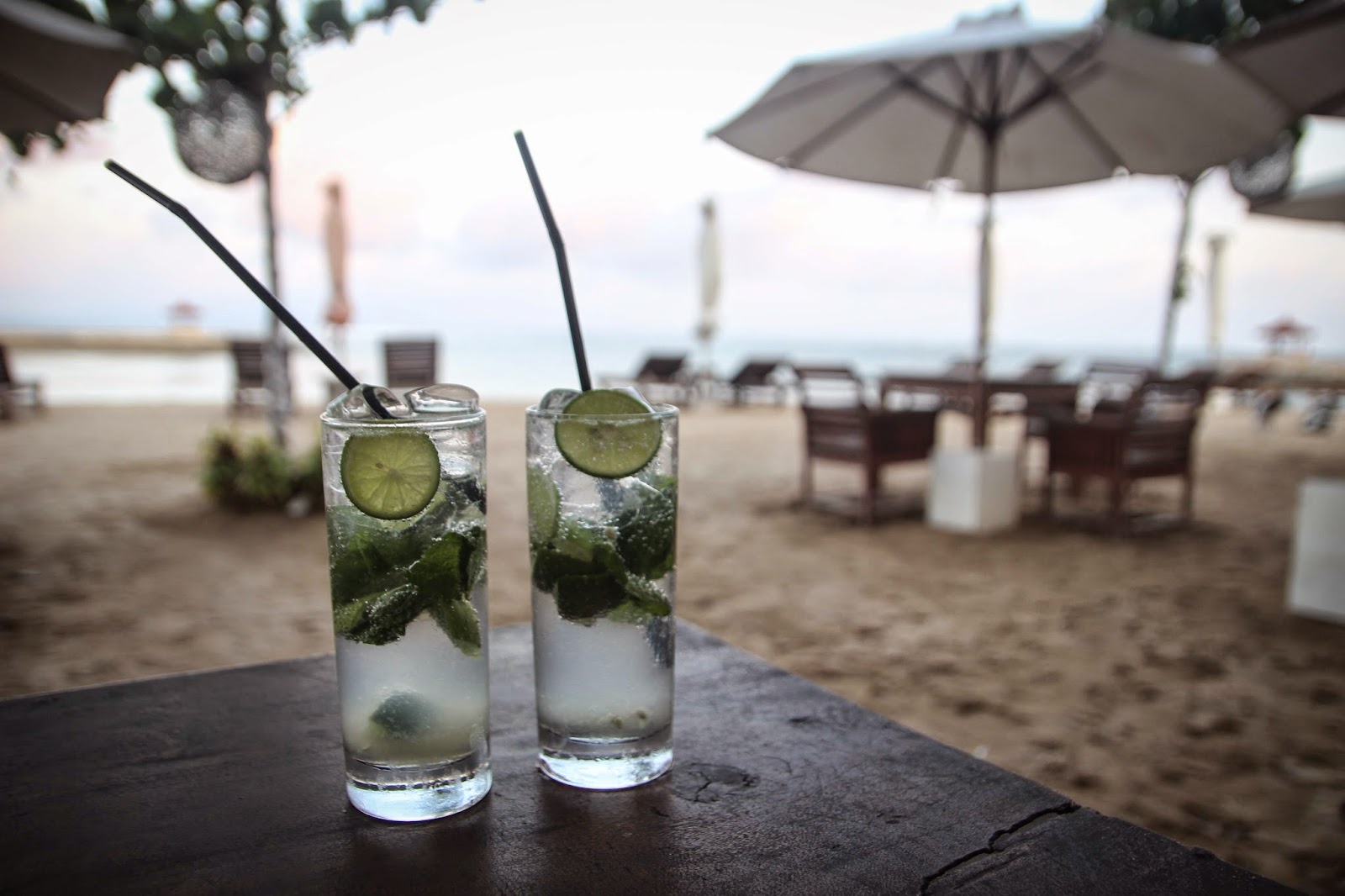 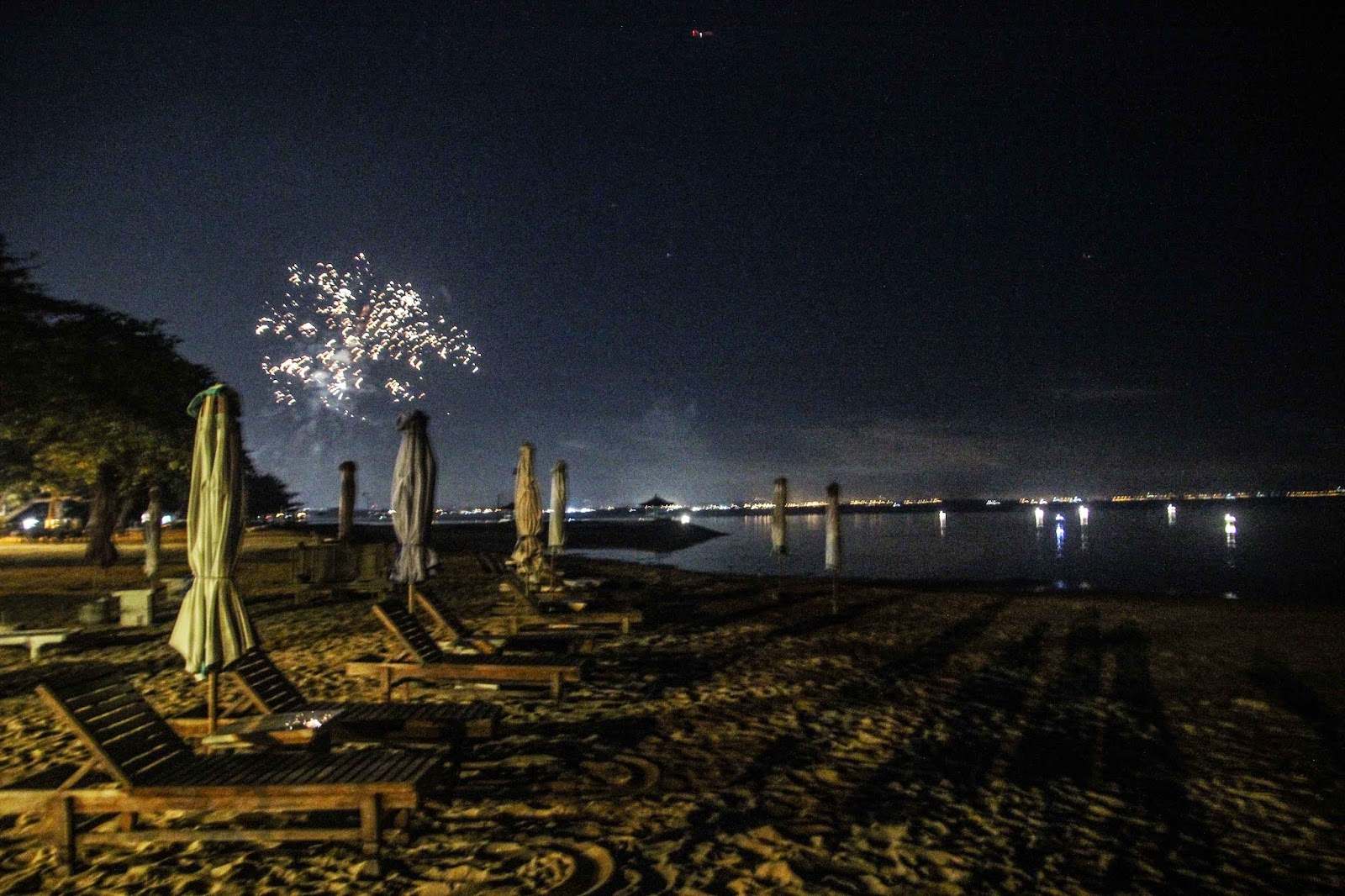 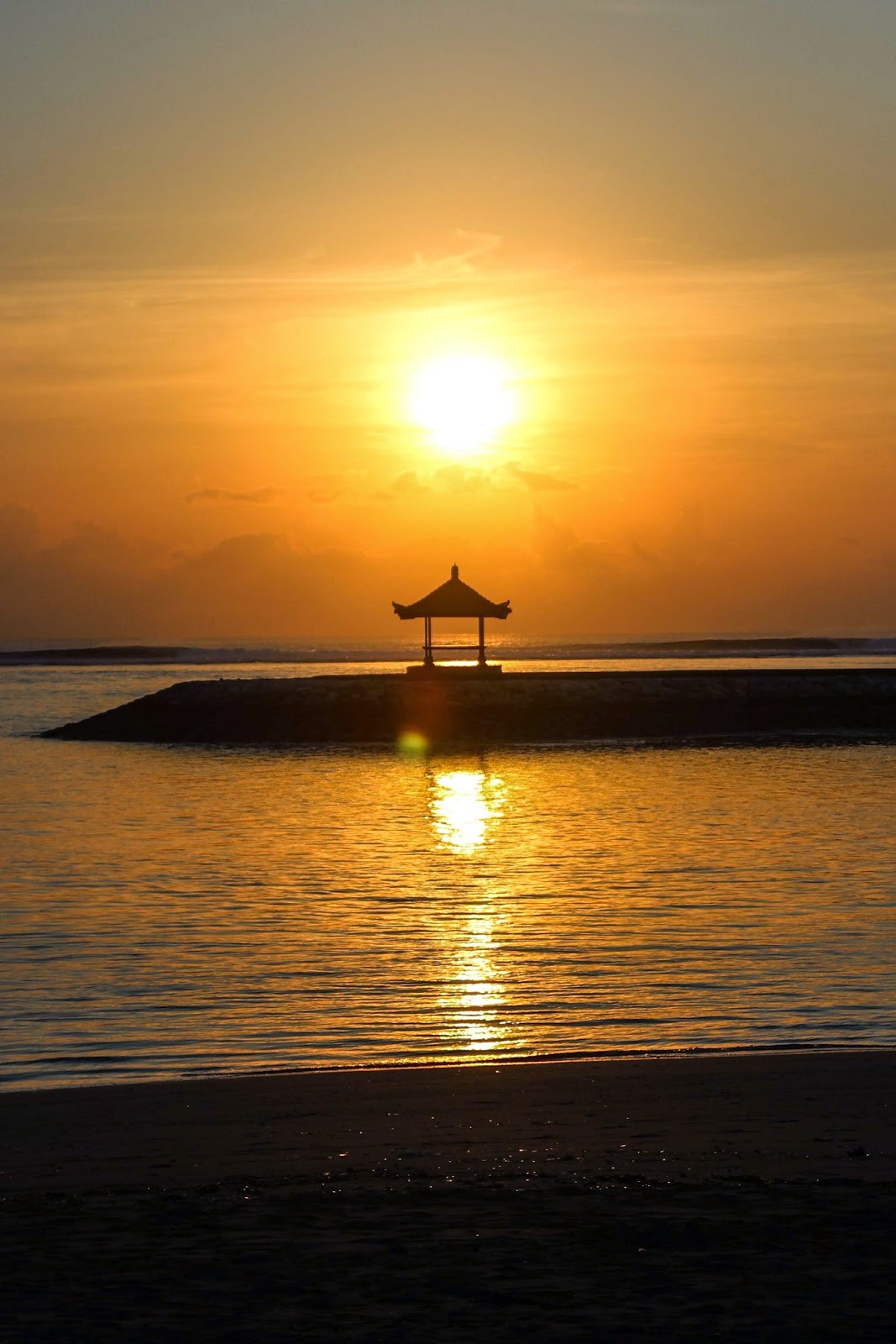 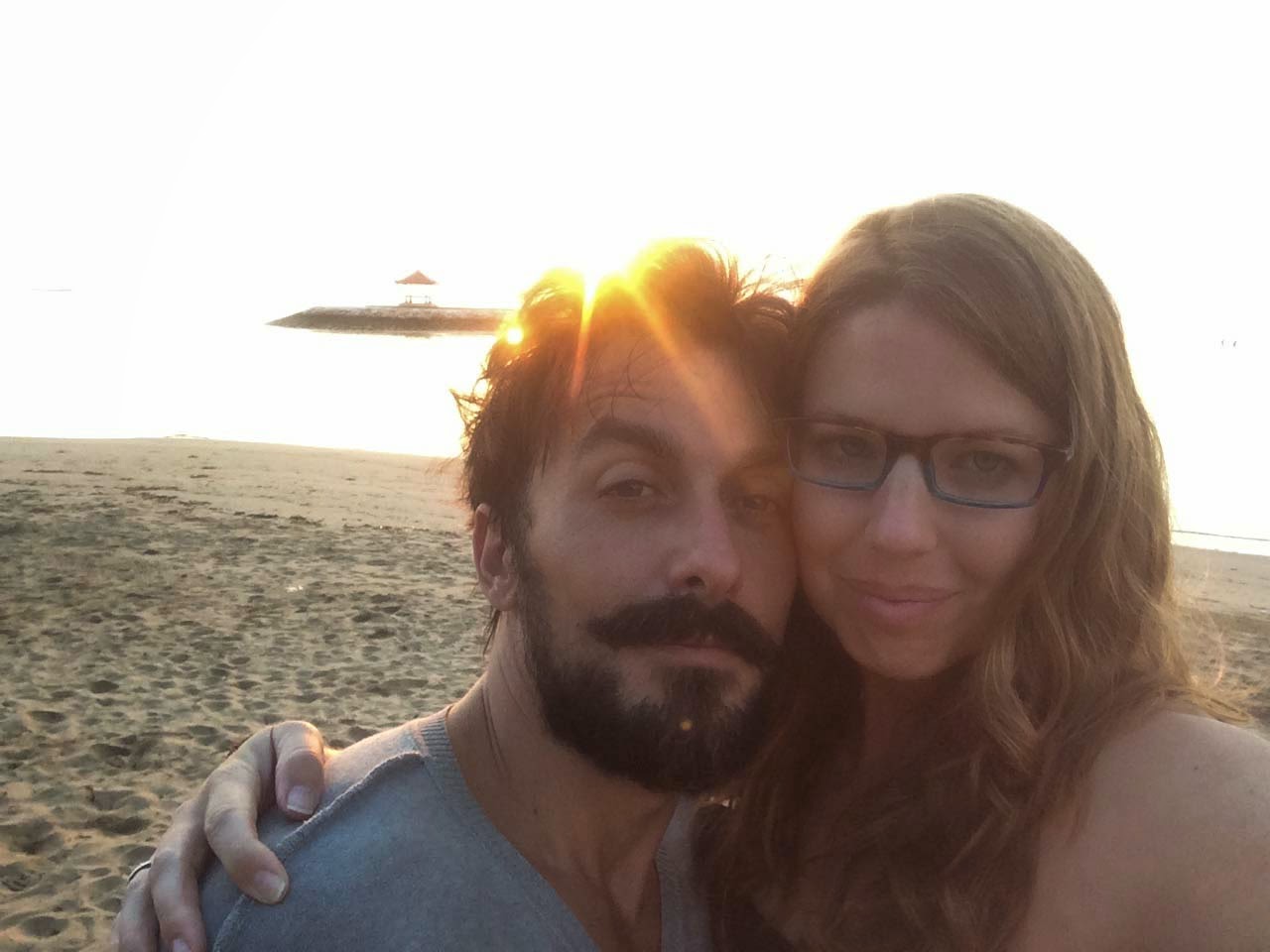 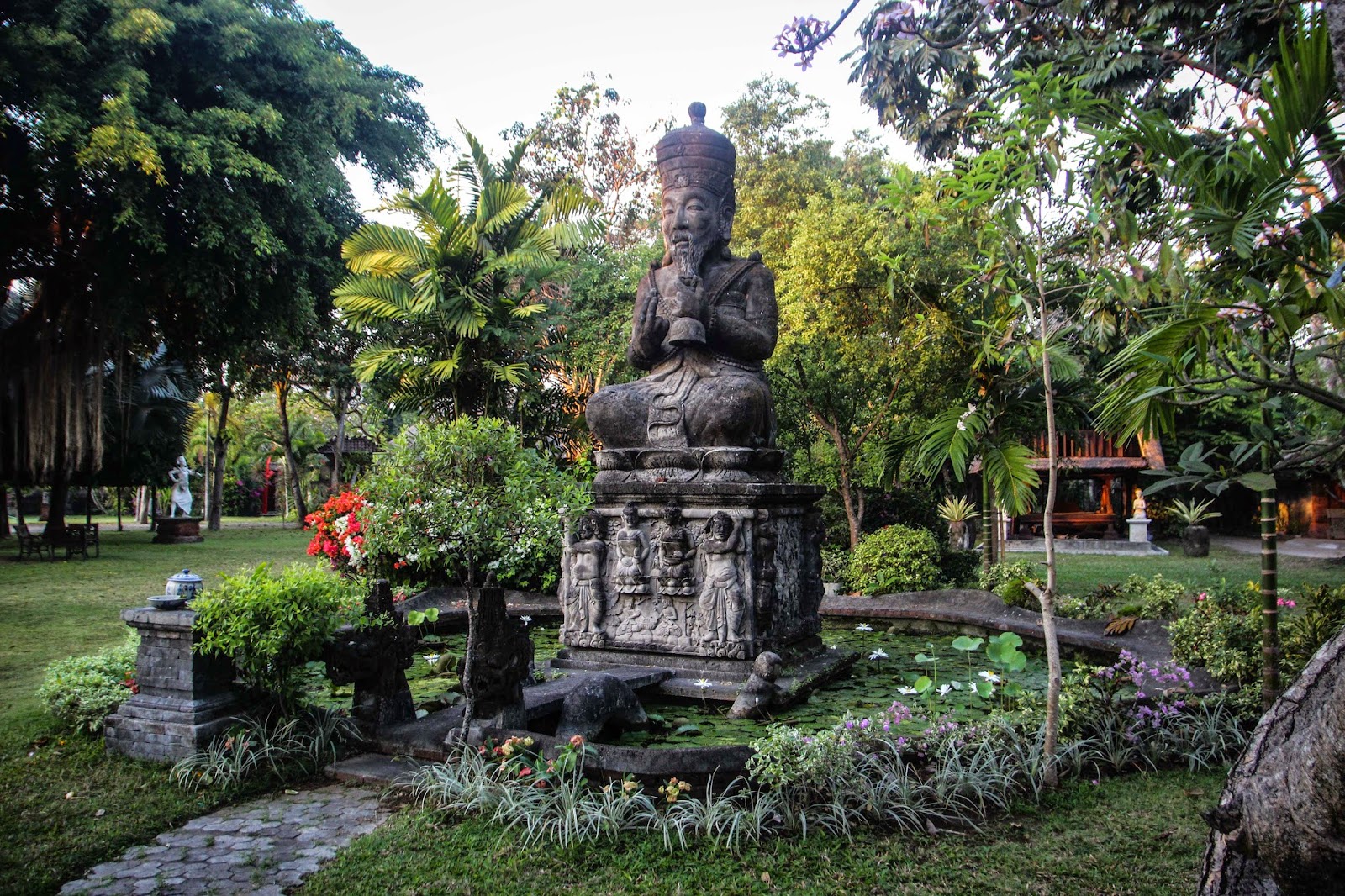 That evening, we also decided to check out a proper sunset, deciding when João's class ended a bit early to hop on a motorbike and drive to the opposite side of the island.  Google said it would take about 28 minutes to reach Canggu, a beach on the western side of the island.  Google lied.  We immediately hit heavy traffic leaving Sanur, then got pulled over by a police officer demanding to see an international driver's license, which basically meant he wanted cash.  He tried for $50 (João remembers him trying for $200 first!), saying the fine was $100, as we tried to negotiate.  We got him down to 200,000 rupiah (about $15-20), and when João handed him the cash, he turned to me and asked for the same from me!  We insisted we didn't have any more money, and he finally smiled and left.  Typical Bali.  It took us well over an hour of weaving through heavy traffic to make it over to Canggu.  When we reached the Betelnut Cafe - a spot that had been recommended to us - we simply left the bike and walked the rest of the way rather than spend another second on it.  Thankfully, we reached the beach at just the right time, catching an incredible sunset as we walked along the black sand beach, watching the probably hundreds of surfers attempt to catch the choppy ocean waves.  Off in the distance, huge kites flew through the air, and the mostly cloudy sky opened up at just the right time for an explosion of color and a reflection of the bright red sun in the waves below, before it disappeared entirely.  We had managed to catch both sunrise and sunset in a single day, on opposite sites of the island. 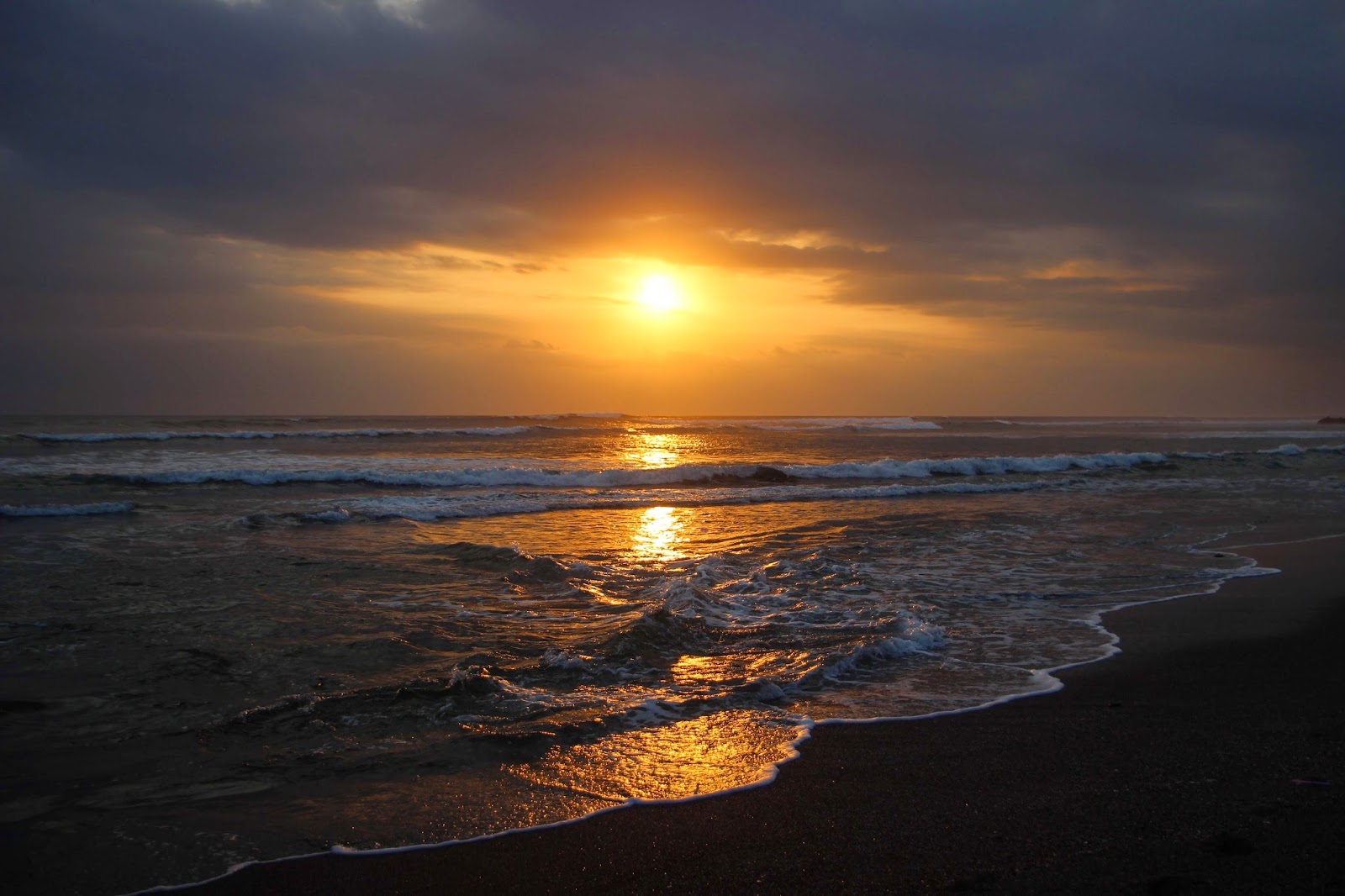 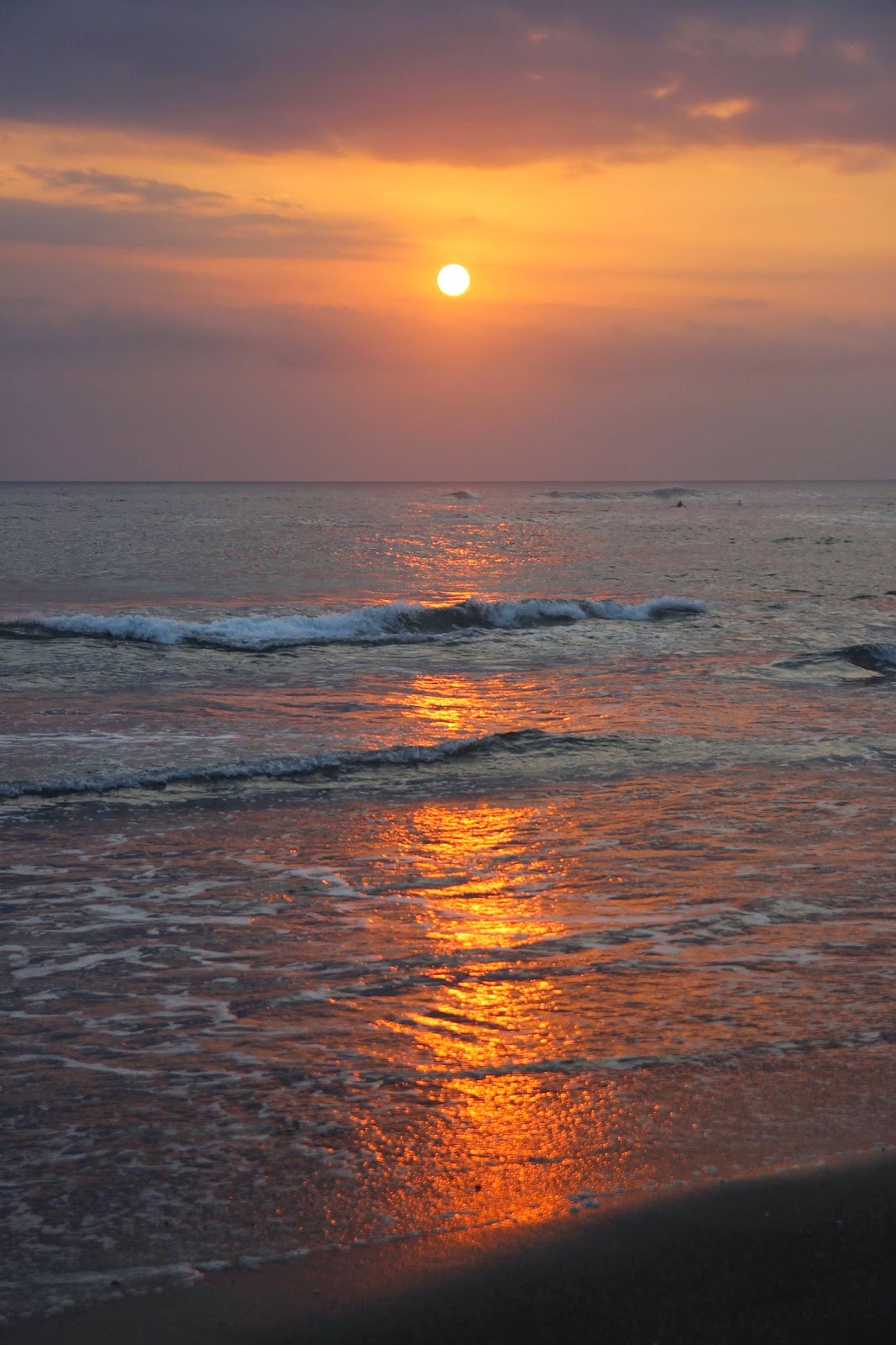 As the sky grew darker, we walked back to Betelnut Cafe and secured a table in the ground floor room.  We shared a delicious plate of spring rolls and an incredible bowl of curry, as well as a burrito (though the burrito wasn't nearly as good as the curry, which was outstanding).  Our drive back to Sanur was faster and involved a lot less traffic, but with the dark and the sheer distance was still difficult, and it took nearly an hour again.  We returned the bike immediately upon our arrival and picked up some ice cream to comfort our frayed nerves, before collapsing at the hotel.

After spending a couple of days entirely consumed by diving, we had a final day to relax in Sanur before heading up to Ubud to explore a bit more of Bali.  We found a restaurant near the hotel called Three Monkeys, with open, airy, modern decor, with a second story patio and tall lanterns hanging from the ceiling over the floor space.  We sat at a table on the balcony, ordered a bottle of the local sparkling wine, an appetizer of roasted red pepper bruschetta, and two entrees to share.  We took a chance on the monkfish dish - it was amazing - and a plate of pumpkin ravioli with a brown butter sauce that was so rich it could have been dessert.  But we still ordered dessert - a decadent chocolate cake for me and a fruit tart for João.  The meal was absolutely incredible, and though it was the day after my one year travel anniversary, we felt this was a proper celebration for it!

We spent most of the next morning still wandering around Sanur - checking out a "local market" which turned out to be just a few tents and tables with various clothing items and accessories, and we walked along the beach path, checking out the colorful fishing boats resting up on the sand.  We also passed a small artist stand with a man selling intricately decorated wooden eggs, deciding we might return to pick one up later as we were planning a return to Sanur for a bit more diving.  For lunch, we tried out the nearby Porch Cafe with tasty sandwiches, coffee, and scones.  Finally, we hired a driver at our hotel to take us to Ubud, not having much of a plan for when we arrived, but feeling that, as in Sanur, things would work themselves out… 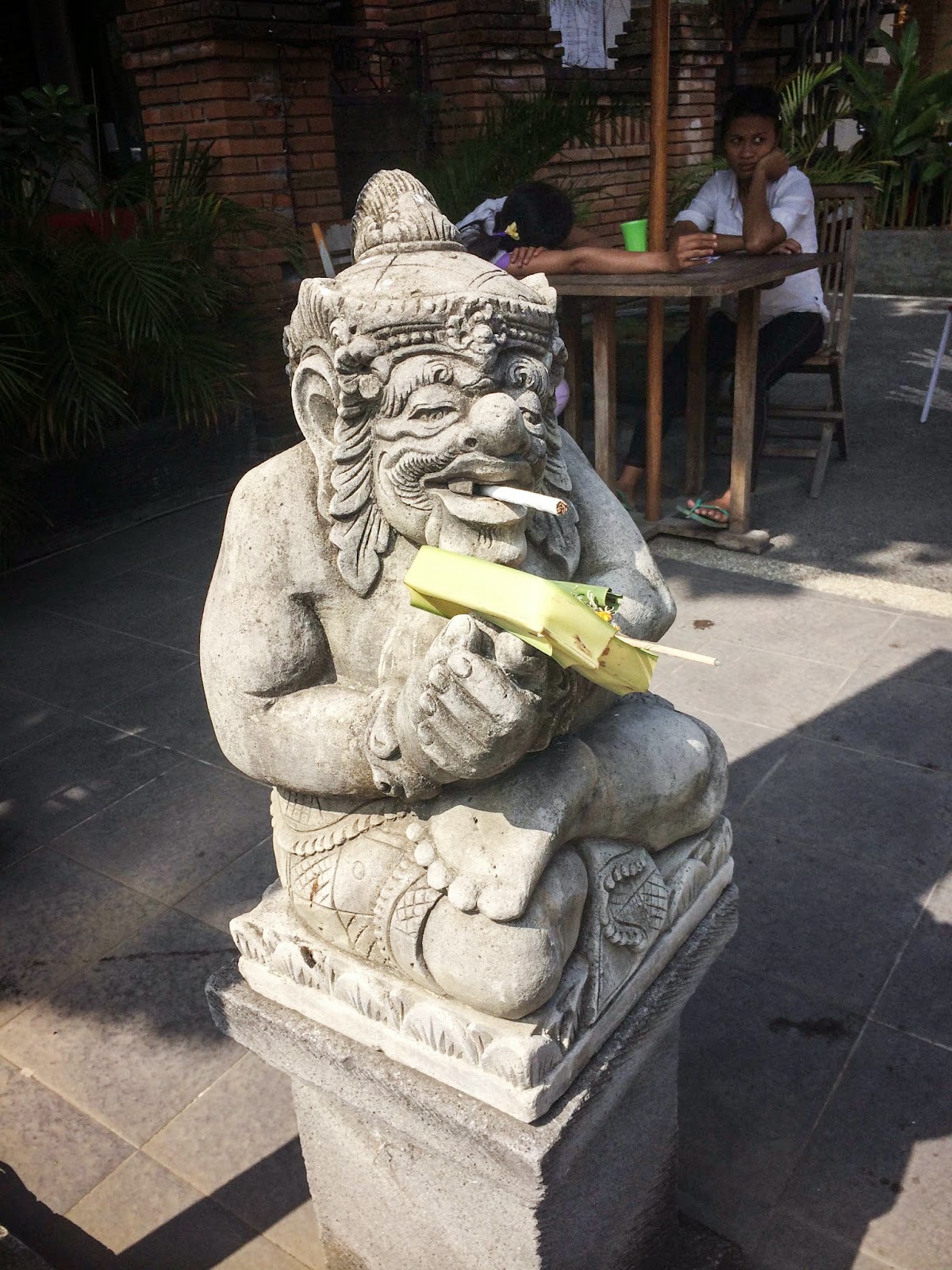 Posted by Outlander Abroad at 10:24 AM