I arrived in Hong Kong at a very interesting time for the Special Administration Region, when it was in the midst of a movement of mass civil disobedience that was dubbed the "Umbrella Revolution".  The movement was a reaction against proposed reforms to the Hong Kong electoral system - in short, that the Communist Party in mainland China would have the authority to "approve" (select) the leadership candidates that Hong Kong residents could vote for.

When I arrived at the Mong Kok metro station, I found myself suddenly surrounded by blocked-off streets for the student-led pro-democracy protests.  It was a relatively quiet community of sign boards and yellow umbrellas and people camped out and sharing ideas while the police looked on.  I never witnessed any intimidation or violence, but it was certainly interesting and a bit humbling to arrive in this city for something as insignificant as a frisbee tournament, as I watched the locals around me taking a stand for their democratic rights. 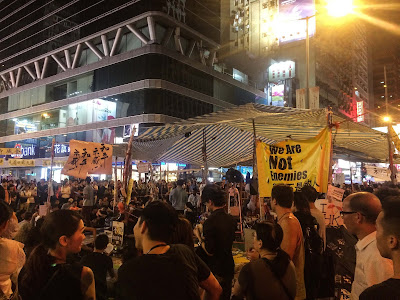 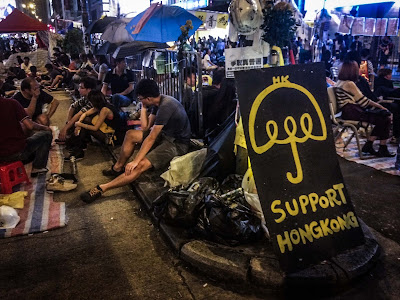 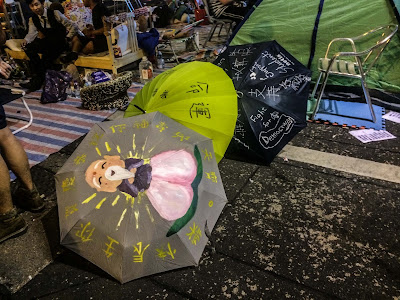 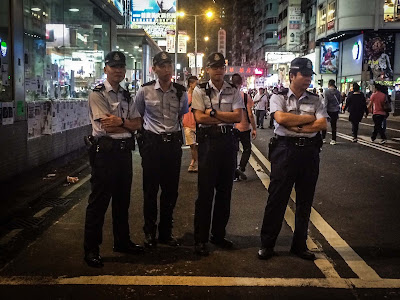 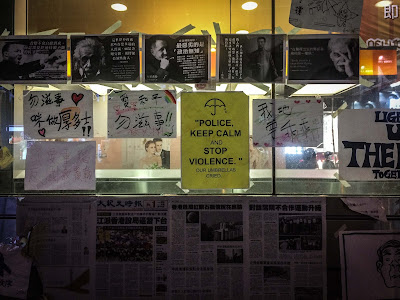 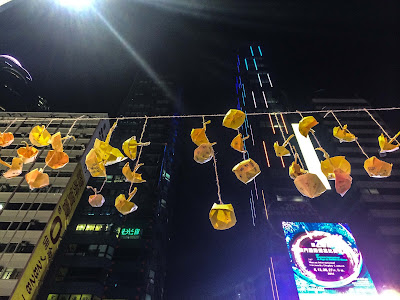 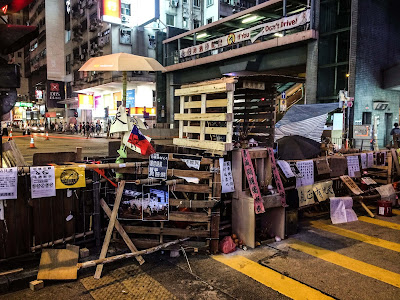 I eventually found the guesthouse where I was to meet with my teammates - mostly expats from Shanghai that my friend Amy had connected me to, as she would be arriving later.  It took some time as the guesthouse was located only on a small portion of a floor of a tall building, and given the vague address I wound up wandering up and down the stairs of an adjacent building full of small shops and stalls full of men with cigarettes in their hands who didn't speak English.  I finally enlisted the help of one of the police officers standing by, and he graciously directed me to the entrance.  Once inside, I met the American and Philippino girls I would be sharing a small room with, and we got some sleep for an early morning for my first ultimate tournament in years.

The next morning, I reconnected with Amy and met more of my teammates as we walked to the nearby fields, set in a beautifully manicured sports complex with incredible views of the city springing up all around us.  Older men and women moved slowly around the edges of the park, doing thai chi or low-impact exercises.  I was entirely unprepared for a tournament given the limitations of my pack, so Amy had brought me a pair of jerseys, and I borrowed a spare pair of cleats from one of the guys on the team.  They were a bit tight and pinched my big toes, but I figured they would get me through the weekend, especially since (given limited field space) we would have byes after every game.  I was wrong.

Our first game was against a Beijing-based team called Big Brother that the Shanghai folks knew well.  It was a tight, back and forth game, but we wound up on top in the end.  Next we played a team from Manilla, and I was impressed that the team was nearly entirely composed of Philippino Nationals rather than American and European expats, like so many of the teams.  They were fast and incredibly athletic, but their throws weren't always on target, and we slowly pulled away for the win.  After two games in those tight cleats, my big toes felt bruised and tender, and not wanting to risk losing a couple of toenails, I switched to my CrossFit sneakers for the remainder of the weekend!

Next we were served delicious boxes of chicken, veggies, rice, and sauce as part of a lunch break  We sat in the shade on the edges of the park, eating using the container lids as spoons since the chopsticks were a bit late to arrive.  As wevchatted with other teams, I bumped into one of the guys from pickup in Singapore - I hadn't realized it before, but he was actually from Memphis and had played ultimate in Wyoming with a close friend of ours!  The global ultimate community remains a very, very small world indeed.

After lunch, we only had one game left against a strong team from Taiwan, called Chairman Xiong Mao (a clever play on words, since 'xiongmao' actually means 'panda' in Chinese).  Again it was a close game, and we walked away with a win by only a point or two.  I finished the day completely exhausted - I clearly hadn't been doing much running over the course of my travels, and I felt slow and out of shape.  Every cut I made on the field felt like I was wearing ankle weights and an inner tube around my waist!   Plus, I hadn't played real 7-on-7 ultimate in a very long time, and it was a struggle just remembering where on the field I needed to be!  Thankfully I had Amy there to help me, and I gave her permission to yell and instruct me as much as possible!

We returned to the hotel to shower and rest a bit, then grabbed a quick dinner before heading to the party.  Ultimate tournament parties are well-known for involving silly themes and lots of drinking, to the point where one team will often seek to 'win the party' rather than the tournament itself.  In this case, the party winners actually received an award similar to the tournament winners!  We hopped on a bus that would take us and the other attendees out to a spot called 'Hidden Agenda' - a warehouse-style space over an auto repair shop.  The DJ was loud but good, and despite numerous 'no smoking' signs, it seemed that every person working at the venue was smoking.  Thankfully, ultimate players don't often smoke cigarettes, so it wasn't too bad.  The party theme was puns, so various teams dressed accordingly, some more elaborately than others.  The team that would go on to win the party called themselves 'Gang-green' and wore green tutus and bandanas and walked around putting little green stickers on everyone else at the party.  Eventually a few of us broke away around 11:30 and found a taxi back to our hotel, leaving the party still in full swing. 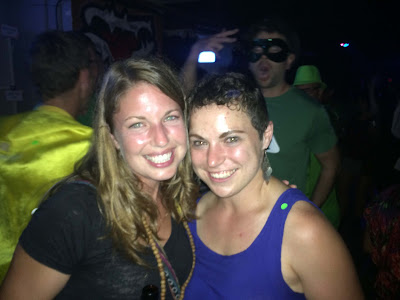 Since we had done so well on the first day of the tournament, we had earned a first round bye for Sunday, allowing us to sleep in a bit, pack our bags, and grab some coffee before meeting at the fields for our first game.  We played against a team called Hakuna Matata, led by a woman who had gone to Wake Forest and played with many of my friends from North Carolina.  While it was probably our easiest game of the tournament, it was by no means a blowout, and we had to work for the win.  My legs felt much better after the jolt of the previous day, and I sort of remembered what I was doing on the field, allowing me to get a bit more involved!

Our second game of the day turned out to be a rematch against Big Brother from Beijing, though they had picked up a few new players since our previous game.  Though we mostly traded points the entire game and kept things close, we wound up losing in a heartbreaker by a single point.  Honestly though, I'm not sure I could have made it through another game, and the eventual winners - a mixed group called Junket - beat Beijing handily in the finals.  We had a consolation match ourselves, but it was a rematch against the Taiwan team from the previous day, and neither team took it very seriously! 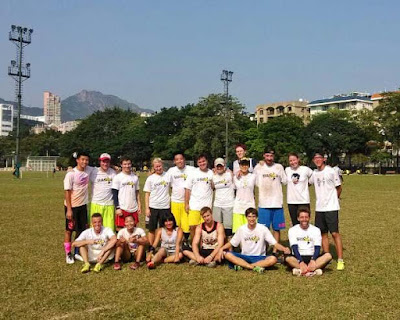 Since I was planning to stay a few more days in Hong Kong, I had the luxury of hanging out at the fields through the end of the finals, watching the match, enjoying some free pizza, and chatting with various teammates and random other people from the tournament who somehow had even more connections with friends back home.  As I finally bid Amy and my teammates farewell, I was thankful that I had made the decision to return to Hong Kong and to take part in the tournament.  It was an interesting mix of something familiar and completely unique, huge varieties of new people with surprising connections to old friends, a sport that used to be an integral part of my life in a year of exploration.  And as my time out on the road was nearing an end, it was nice to have that familiarity mixed with the new, and I was looking forward to a few more days in Hong Kong.
Posted by Outlander Abroad at 10:32 AM