Everything will work out in the end...

A lesson I've tried to remind myself of over the years is, 'everything has a tendency to work out...'  Event if it's not quite how you pictured it.  Travel has a tendency to take your nice expectations of how things will or should go, and flip them on their pretty little heads.  And despite much flailing of arms and gnashing of teeth, I find myself trying to close my eyes, take a deep breath, surrender control, and let it be what it is, trusting that it will all work out in the end.

One such moment came when I found myself sitting on the floor of the Copenhagen Airport, waiting to see when or where I would be flying out and to...

I was visiting my close friend Sarah, who had been sent to Denmark for four months for work.  After two weeks of wandering Copenhagen and jetting around to nearby countries for a few days apiece, we went out for a big night of drinking to celebrate my imminent departure.  Also, my 29th birthday.  Being a responsible, frequent traveler, I packed my things and checked into my flight earlier that day.  All I would have to do is make it to the airport and print my boarding pass.  Easy. 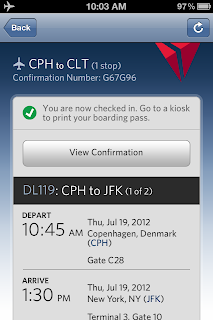 As birthday celebrations are wont to go, there was much drinking... rounds of Tuborg, mixed drinks, shots of Fisk.  We awoke in a hungover daze, not quite running late, but just short enough on time that things like breakfast and coffee were suddenly no longer options.  Thankfully my friend had offered to escort me to the airport before work, so I followed her through Nyhavn, trudging through the rain with my overloaded pack towards the metro.


As we waited on the metro to arrive, an announcement came on the loudspeaker in Danish.  Something about the airport, that was clear.  We boarded the metro, suddenly realizing what was being said.  The metro wasn't running past a certain point.  We couldn't get to the airport via the metro.  Beginning to panic, we worked through our options.  We couldn't walk to the train station, there just wasn't enough time.  A fellow passenger offered that we could jump off at a particular stop and catch a train from there.  An older couple sitting near us caught wind of the conversation and exited with us.  Except when we exited, there was no train.  After a few minutes, we flagged down a cab and piled in.  We pulled into the airport right at 9:45, exactly an hour before my 10:45 flight.  The couple did us an enormous favor, covering the cost of the cab, allowing us to quickly head into the terminal.  I assumed I no longer had time to check my bag, but otherwise still had plenty of time to make it through a relatively quick security check.

Once inside the airport, we canned the overhead screens for my flight, but no terminal or gate was listed.  We located an information agent who informed me I was too late to check in - "I've already checked in, I just need to print a boarding pass" - but who flagged down a colleague who gave me the terminal number, after also informing me I was too late to check in.  We rushed to the correct terminal, still a solid 50 minutes before my flight, but the Delta check-in counter was completely empty.  I tried a kiosk, but it wouldn't allow me to reprint my boarding pass - rather, it directed me to the nonexistent agents.  I asked an airport worker for help and was directed to the ticket office.  I queued for the first available ticket agent, who told me I had to wait in the other line for the Delta rep.  While queuing for a second time, I realized the two people in front of me were also on the flight I was supposed to be on.  The guy immediate in front of me even had a seat request card, but security had sent him back to check his bag (which was now impossible, with the absence of anyone at the Delta check-in counter).  He was escorted by a woman who worked for one of the other airlines who reassured us, saying we still had plenty of time to make it through security.  A supervisor was called to help him, so I finally had my chance to speak to the Delta customer service rep.


I showed her the check-in confirmation on my phone (thanks to the handy Delta app) and explained that I just needed to print a boarding pass.  She insisted that she could not print a boarding pass.  (Are you connected to the internet?  Do you have a printer?  Then yes, you can.) (Let's also note that I would be in the exact same situation had I simply dropped my boarding pass on the train.)  She insisted she could do absolutely nothing to get me through security.  The supervisor, having already called the Delta agents at the gate on behalf of our new friend, refused to do the same for me - "They say no to him, it's the same for you" - despite our situations being quite opposite.  The representative finally offered me a solution - she could get me on the 2pm flight.  For a $250 change fee.

At this point I was livid.  Keep in mind that I was hungover, hungry, exhausted, not caffeinated, and the entire situation seemed to me that it could be solved very simply with an internet connection and a printer.  If I were a cartoon, this would be the point when steam starts shooting out of my ears.  I gritted my teeth, handed over my gold Delta Skymiles American Express, and paid the change fee, determined to contest the charge once I got home.  The customer service representative leaned in and whispered, "You should really thank me, I should have also charged you the difference in fare."  Head explodes in fury.

Seething, I walked away, had some much-needed coffee and breakfast, and got in line to check in for the 2pm flight, right at 11am.  Immediately, an airline employee announced that there would be an announcement in 10 minutes, and until then check-in would be suspended. We overheard a man nearby mention that the previous day's 2pm flight had been cancelled for equipment issues, and wondering if this was the same plane with the same issues.  We made ourselves comfortable on the floor of the airport.

Over an hour later, the announcement was made that the flight was indeed cancelled, and we would be re-booked on other airlines if needed.  Another hour or so passed before I finally made it to the agent and told her my story.  "Oh yes! You didn't show up for the earlier flight!" Yes, well, I was here, having checked in a day in advance.  She mentioned that they had been in an oversold situation but "luckily" hadn't needed to take any volunteers off the plane.  Of course.  While I had been waiting, I had found an itinerary that would actually get me home that night, if I could only get on a 2pm American Airlines flight to London.  It was currently 1:40.  Miraculously, the Delta agent pulled some strings and got me on the flight.  I shared the good news with Sarah, who gave me a big hug and sprinted off to the office.  Except that a few minutes later, the agent realized while she could get me on the flight to London, she couldn't get me on the next leg of the trip, and there was no way to get me home that night.

At that point, I gave up.  I asked her to put me on a Sunday afternoon return, since if I couldn't get back to work the next day, I might as well stay a full weekend.  She booked the reservation, gave me a taxi voucher, and let me borrow a phone to call Sarah.  Our new friend who had gone through the same ordeal had been rebooked to the next day, and we wished each other well as we parted.

So, while the day was an absolutely exhausting logistical nightmare of travel misadventures, the entire incident allowed two things.  One: I got to spend an absolutely lovely weekend in Copenhagen.  We had some the best weather of the entire trip, and we spent much of it at a nearby park, soaking up the sun, grilling out, throwing the disc, playing lawn games, and sipping beer. 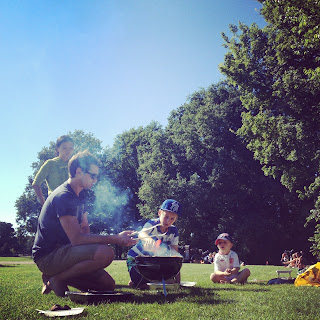 Two: a few months later, I was traveling to San Francisco for work, to attend a conference of roughly 90,000 people.  As I was walking through the crowd, I recognized one of the workers.  He gave me the same look of recognition, so I walked up and asked where I knew him from... slowly his eyes lit up... "Denmark."  It was our friend from the ordeal!  So here we are, meet Nate. Perhaps we'll bump into each other again in some far corner of the globe! 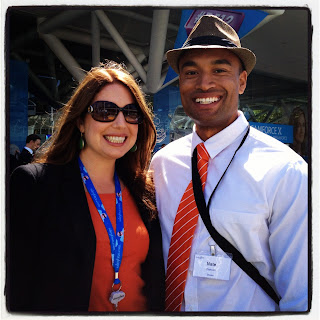 Oh, and that $250 change fee?  I called up American Express when I got home, contested the charge, spoke with Delta to confirm the situation, and the fee was promptly reversed.  And I was awarded a few miles as well.

So it really did all work out in the end.... this time!
Posted by Outlander Abroad at 12:14 PM