As exciting as it can be to get a lovely, colorful visa page stamped into your passport (a promised visit to a foreign land! and look at the pretty colors!), the process to actually get one of those sought-after prizes can be quite the challenge.

Whether or not to secure visas before I started my RTW was one of the things I struggled with in planning for the trip... Would I really need them?  Couldn't I get them while overseas?  What if I didn't even make it to the country and spent all that time and effort and money on getting the visa?  But I did as much research as possible into the entry requirements for the countries I hoped to visit, especially the must-see places, and determined that there were at least a couple of visas I would seek out beforehand.


A note:  many people assume that you need visas for every country, or that you only need a visa if you're planning to live or work - the entry requirements for every country you plan to visit will vary drastically, and those same requirements will also differ based on where your passport originates.  As an American citizen, the US State Department travel website is an invaluable tool in determining the exact requirements that you'll be faced when attempting to visit each country or territory abroad, including whether or not you'll need a visa in advance.

Thankfully, many of the countries I'm planning to visit either don't require visas for American tourists staying less than 30 days (and border runs can typically extend those if needed), or if a visa is required, it can be requested and processed at the airport upon entry.  (Though keep in mind, you may need to carry extra passport photos or have multiple copies readily available of your passport and driver's license, as well as have proof of any required inoculations.)

Two countries that are on my must-see list that also have notoriously strict entry requirements are India and China.  I've already got a tour booked in India in March, and since I have a friend teaching in Shanghai and desperately want to visit the Great Wall, China is a must as well.

I'll start with India.  I had the great misfortune of requesting my visa right at the moment when the agency that must be used to process your visa request with the embassy was being transferred from an American to an Indian company.  Their website contained incorrect information, and it was impossible to call the actual office that you were applying towards (the only number offered was for a generic helpline that took on average 30 minutes of hold time and 30 busy signals to get through).  The first time I submitted my application (yes, first... I'll get to that...), I was missing an envelope to send my passport back to me, simply because it wasn't listed in the required documents at the time (the helpline personnel admitted the website did not contain the correct information at the time, but it was up to me to remedy the error).  And despite the website's claims of a 5-7 day turnaround, it took roughly 10 business days for my application to even make it into the system, and another 10 for it to be processed.  Thankfully, a very generous friend was able to pick up my passport and send it back to me, visa stamp firmly in place, one month after I had submitted the paperwork initially.  Except that the visa expired 2 months before my tour was set to take place....

There's really nothing worse than realizing all the effort you've just been through has been nullified, and it's entirely your own fault.  I failed to read the fine print on the printed application (the fine print doesn't exist on the online application... it only shows up when you print it) that the visa was valid from "date of issue" rather than "date of journey". This being my first ever visa application and the fact that the request form asks for an anticipated date of journey and length of stay naturally led me to believe that it would be valid from the date I provided.  In hindsight, a poor assumption.  Thankfully, by the second time around (and after a month of processing visas), the process was much more swift.  Filling out the paperwork and gathering the required documents (and envelopes!) was quick, I overnighted the application, noticed it in the system only a few days later (albeit with the wrong application number listed), and received my passport roughly two and a half weeks after I had initially submitted it - with a 10 year visa instead of the 5 year I had applied for.  I'll take it! 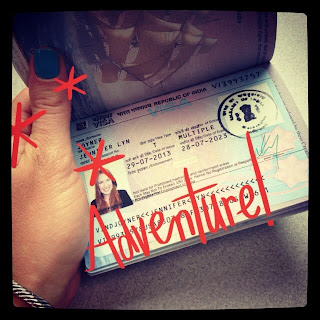 China was an entirely separate challenge.  Thankfully a friend recommended a fantastic agency to broker the visa process.  While the agency itself was a breeze to deal with (they answer the phone! they send email updates!), the actual requirements to secure a visa for China is another animal.  Unless you were born in China, the longest tourist visa available is only one year from the date of issue.  This meant I wanted to wait as long as possible to actually start the application process, to allow myself as much time as possible to make it to and explore China.  I also figure *maybe* it will be easier to extend an existing visa if I already have one.  At the very least, I don't want to be stuck needing to forfeit my passport while already abroad to get this visa in the first place.

Back to the requirements.  Where India asks applicants not to purchase airline tickets until a visa is secured, China wants proof that you're planning to stay in (and leave) the country.  Proof can come in the form of a hotel stay AND airline ticket, or a letter of invitation - either from a friend or from a tour company.  Now, I do actually have friends living in China, but most of them are in Hong Kong.  Unfortunately, Hong Kong has a completely separate set of rules, and doesn't count as part of China according to the mainland.  I do have a friend who will be teaching in the mainland for the next two years, but as she hasn't yet received her work visa, she isn't technically able to write me a letter of invitation.  As for a tour company, I could book a cheap tour that I may or may not actually use, but it seemed like a lot of hassle and paperwork and money for something I likely wouldn't even do.

After a quick phone call to the My China Visa agency, they explained that the DC office will typically provide a visa with just a hotel reservation (yes, the various offices have different rules), so I made a quick (fully refundable) reservation at a Marriott property in Beijing for next summer and submitted my paperwork.  Unfortunately, I got the call a few days later that the embassy had declined my application.  I briefly considered booking a fully refundable airline ticket but decided it wasn't worth the hassle, and maybe I would just try my luck with an embassy on the road.

I called the agency back, explained that I was planning to travel overland and therefore won't have any pre-arranged airline tickets, and asked if they could just send my passport back sans visa.  They were actually surprised that I had been declined in the first place ("you must have gotten the one really strict agent"), so they offered to resubmit the application.  About a week later (and exactly two days before I left Charlotte), my passport arrived safely home, one-year Chinese tourist visa in place, the entire process having taken roughly three weeks. 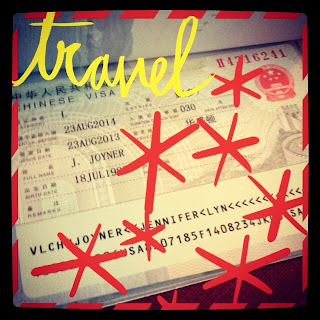 So, before you venture off on a world tour, make sure you know the entry requirements for your must-see destinations, and make sure you leave plenty of time for any necessary visas!  As for me, I'm all set for now!!

Posted by Outlander Abroad at 10:51 AM