An Anniversary in Edinburgh

One of the lynchpins to making the decision to visit Europe was that I would be able to also drop in on one of my dearest friends in Scotland.  Sarah and I had met years ago in Charlotte, bonding over a mutual love of ultimate frisbee and travel, and, together with our friend Andrea, we made up a trio of Amazons, a fitting name as anytime we would get dressed up and don our heels for a night out, we generally towered over the male population of the city.  The three of us wound up all having major life-changing events occur at roughly the same time - Andrea giving birth to a beautiful set of twins, and Sarah and I each quitting our jobs - me to begin this journey, and her to move to Edinburgh to pursue a Masters in Creative Writing.  (And given that she's one of the most talented people and most incredible writers I've ever met, I have no doubt that she will be successful there.)  So after hearing about how wonderful Edinburgh was for the last few months, I was excited to reunite with my partner in crime and see this beautiful city she now called home.

I arrived late on a Thursday in February, the sky a dark cloudy haze, misty rain coming down here and there that would last for most of my visit - ah, Scottish winter!  The next morning, I walked part of the way with Sarah as she ventured to class, wandering on my own to the Scott Monument (the largest monument to a writer in the world - Sir Walter Scott), the sound of a lone bagpipe player filling the cold, damp air around the stone structure.  I ventured just across North Bridge and back, taking in the view of Arthur's seat and the surrounding city, finally making my way to a spot called Artisan Roast back in Sarah's neighborhood for an excellent cup of coffee, a tasty snack, and some time to write in the cozy atmosphere.  Sarah met me there later, and eventually we ventured back out, wandering around campus and up to Edinburgh Castle to take in the view before it started raining.  We darted back towards her flat, ducking into a pub for a pint and some delicious, warm soup, as outside a mix of heavy rain and snow (angry snow!) poured from the sky.  That evening being Valentine's Day, we had a fantastic girls' night planned, getting together with a group of Sarah's classmates for a potluck style dinner of fajitas and margaritas and a terrible Nicholas Sparks movie that we enjoyed openly laughing at. 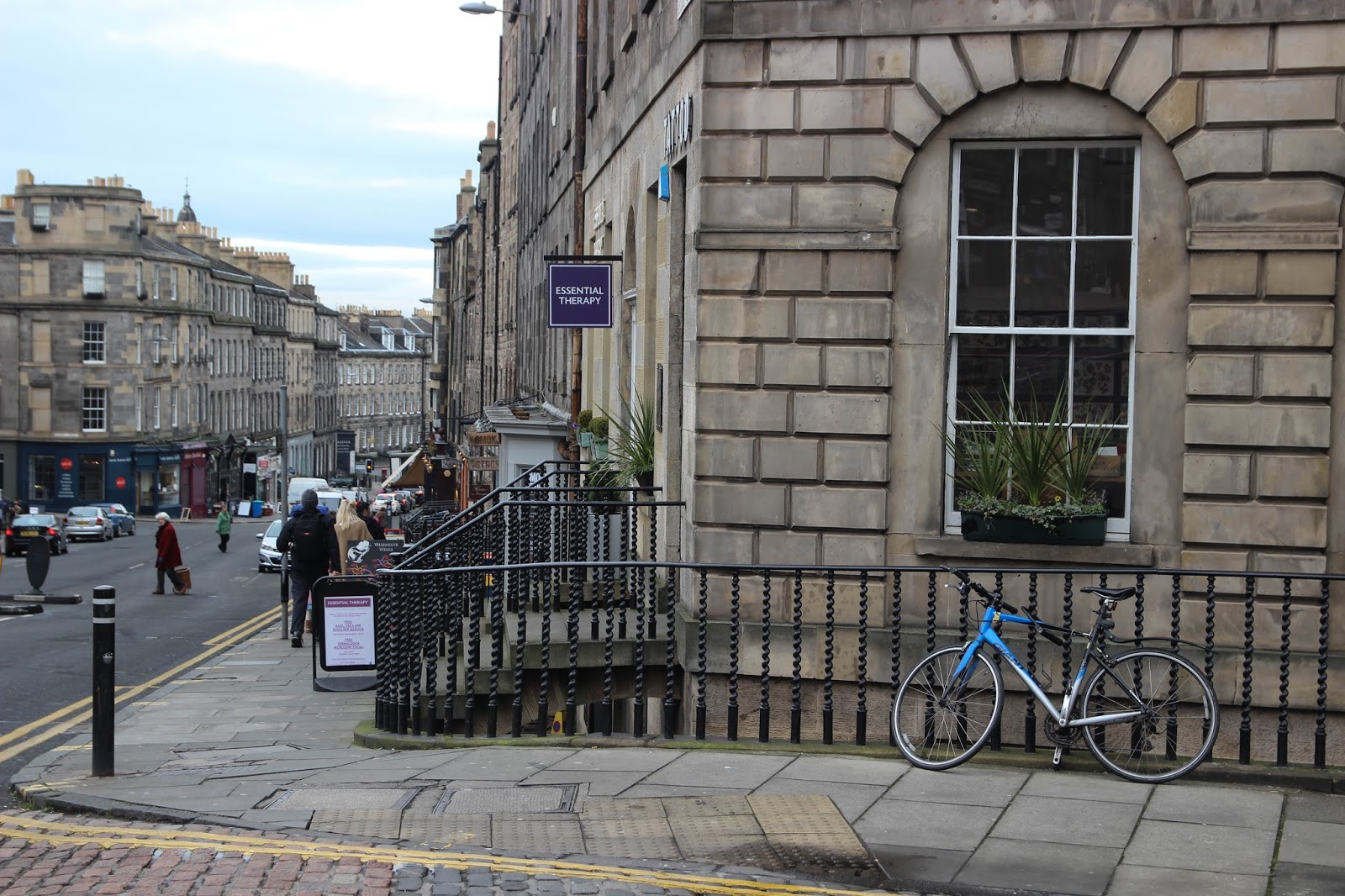 The next day, Sarah gave me a grand tour of Edinburgh, taking advantage of a gorgeous sunny (albeit cold) day to walk around some of the gorgeous old sections of campus, stopping at a spot called Brewlab for a fantastic lunch and another great cup of coffee, continuing to the student union, then to then to the Meadows, a massive park of lush green grass and tall trees, where we definitely spotted a game of Quiddach happening.  Sarah took me to one of her favorite bookstores, a gorgeous little spot with colorful walls and shelves (and macaroons), with many of the books on display having tiny notes affixed to them, describing and/or recommending them.  We also walked through Greyfriar's Kirkyard, a hauntingly beautiful cemetery with centuries' old gravestones and an incredible view of Edinburgh rising up around it, guarded by a statue of Greyfriar's Bobby, a tiny dog that used to live at the cemetery and has since become a town mascot.  From there we walked down Grassmarket, enjoying the view of the castle from the square and the colorful pink light of the sunset against the old stone buildings, finally making our way back home, nosing into small shops along the way. 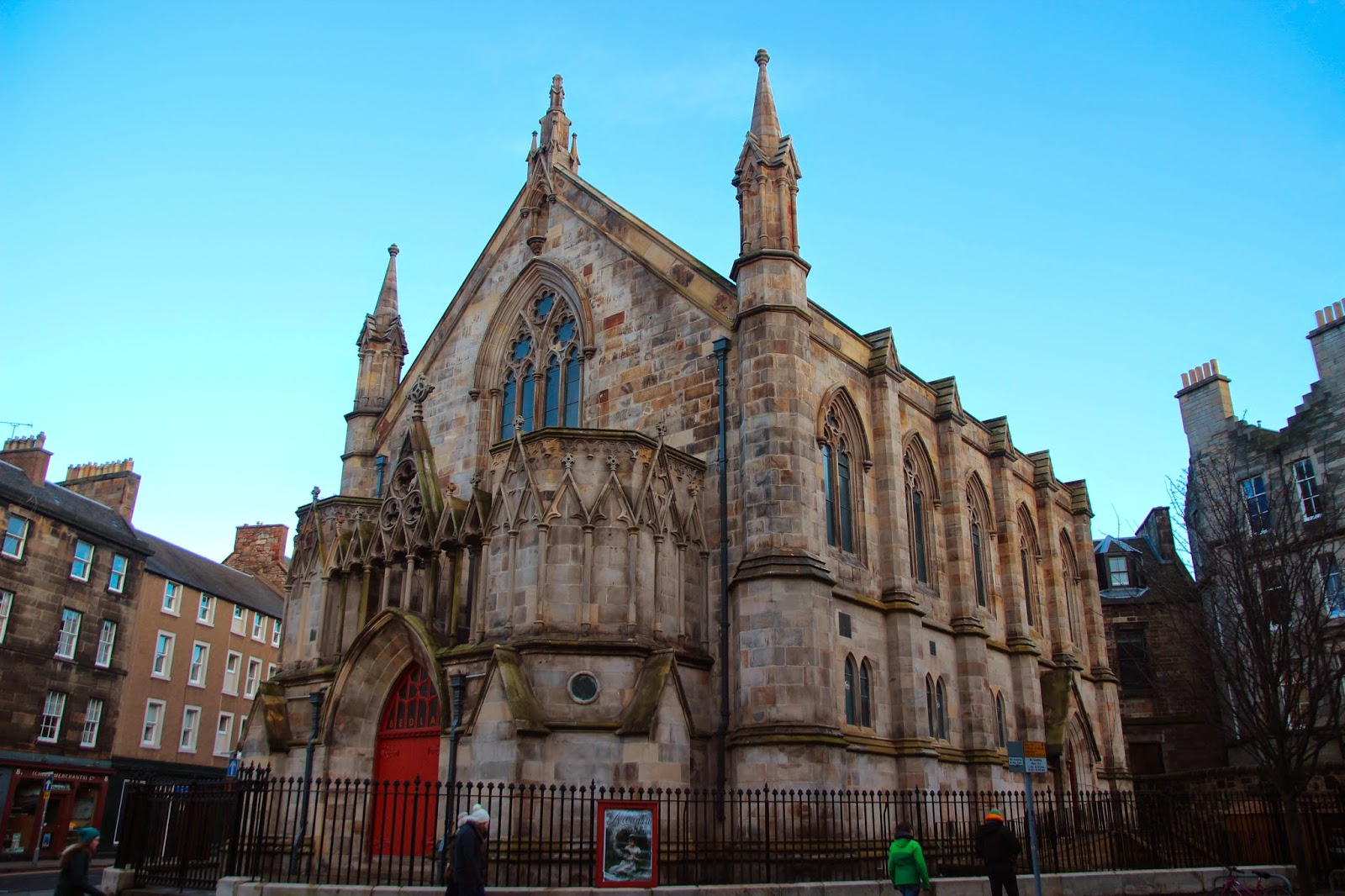 While I had been mostly unaware of the Winter Olympics during my travels, I did happen to be in Scotland during most of the hockey tournament, and with a decent amount of both Americans and Canadians on hand, watching the games became a fixture over the next few days!  Although we missed the epic US-Russia game, we caught the Canada-Finland game at the student union the following day, and later in the week we ventured to a bar called the Globe for the Canada-Latvia quarterfinal and the US-Canada semifinal games, making friends with the other supporters of our respective causes in the process.

Sarah and I also used to climb together as often as possible back in Charlotte, so I was thrilled with the opportunity to accompany her and her friends Hailey and Chris to the climbing gym at the university's expansive gym.  I definitely didn't have the strength or endurance that I once had, but it was still wonderful to get back on some top-rope routes and boulder problems.  We celebrated our venture with a trip to Gourmet Burger Bar, where we stuffed ourselves silly with enormous, delicious burgers (Sarah and I both added cheese and a fried egg to each of ours) and crispy fries.

Of course we managed to have a few nights out as well.  We hit up the Bongo Club (66 Cowgate) for a regular Tuesday night occurrence called "I ♥ Hip Hop", where we danced the night away to both older and more recent rap and hip hop tunes, and the DJ worked his magic with a few mashups (one in particular:  Jay Z's '99 Problems' with Jimi Hendrix's 'All Along the Watchtower').  We also had a quieter ladies night at a luxurious spot called Tigerlily, where Sarah's friend Carrie mixed us up some fantastic cocktails, including something called a Traveling Cuban - a sort of mojito fancied up with Prosecco.

I also celebrated my five month anniversary while in Edinburgh, and Sarah and I figured there was no better way than to celebrate an anniversary in Scotland with a proper Scotch tasting.  We visited the Scotch Whisky Experience just outside the Edinburgh Castle, bypassing the tour to sit at the bar.  The place was nearly empty (it was a Wednesday afternoon, after all), so we had Kenny, our bartender from the Scottish Highlands, nearly all to ourselves.  We split a flight of four regional drams (because let's be honest, we would both be under the table if we had four glasses of Scotch all to ourselves) and an accompanying cheese platter (probably the best decision ever).  Our selections included:  Glenkichie Distiller's Edition, Glenmorangie 18 year old Extremely Rare, Macallan Ruby, and Lagavulin Distiller's Edition.  We added an extra at the end - Ardbeg Uigeadail, at Kenny's recommendation.  The cheese plate included an organic calve brie, smoked applewood cheddar, gruth dhu, and lanark blue cheese, as well as bread, crackers, and a fruit chutney.  The Glenmorangie and the Macallan Ruby were my favorites, but I did keep going back to the Lagavulin's peaty taste, "trying to decide" if I liked it or not.  I'm so glad we decided to sit down for a tasting - it's one of the few tourist activities I really wanted to do in Edinburgh, and as far as celebrations go, five Scotches for five months isn't too bad!

Posted by Outlander Abroad at 6:25 AM