During our long weekend in Barcelona, we happened across a festival taking place in and around the area where we were staying, specifically centered around the Plaza St. Jaume, just a few blocks off the Ramblas.  The Fiesta de Santa Eulalia is an annual event that takes place around the official Saint Eulalia's day on the 12th of February, the date of her death in the year 303.  While one of the biggest annual festivals in Barcelona, it is actually a children's celebration, as Saint Eulalia, a co-patron saint of Barcelona, only lived to be thirteen years old.

We had no idea that the festival was actually taking place or what the events would be, but our paths continuously intersected with the festival happenings.  Every bit of it was a happy surprise, an incredible cultural addition to our time in Barcelona.  What follows is a photo essay on the events that we witnessed.

Our first glimpse of the festival was a parade marching down Ferran, one of the side streets off the Ramblas.  The sounds of drums pulled us towards the festivities, and we witnessed children and parents marching along - some of the children carrying small instruments, some dressed in costume, some with paper mache fruits attached to them! 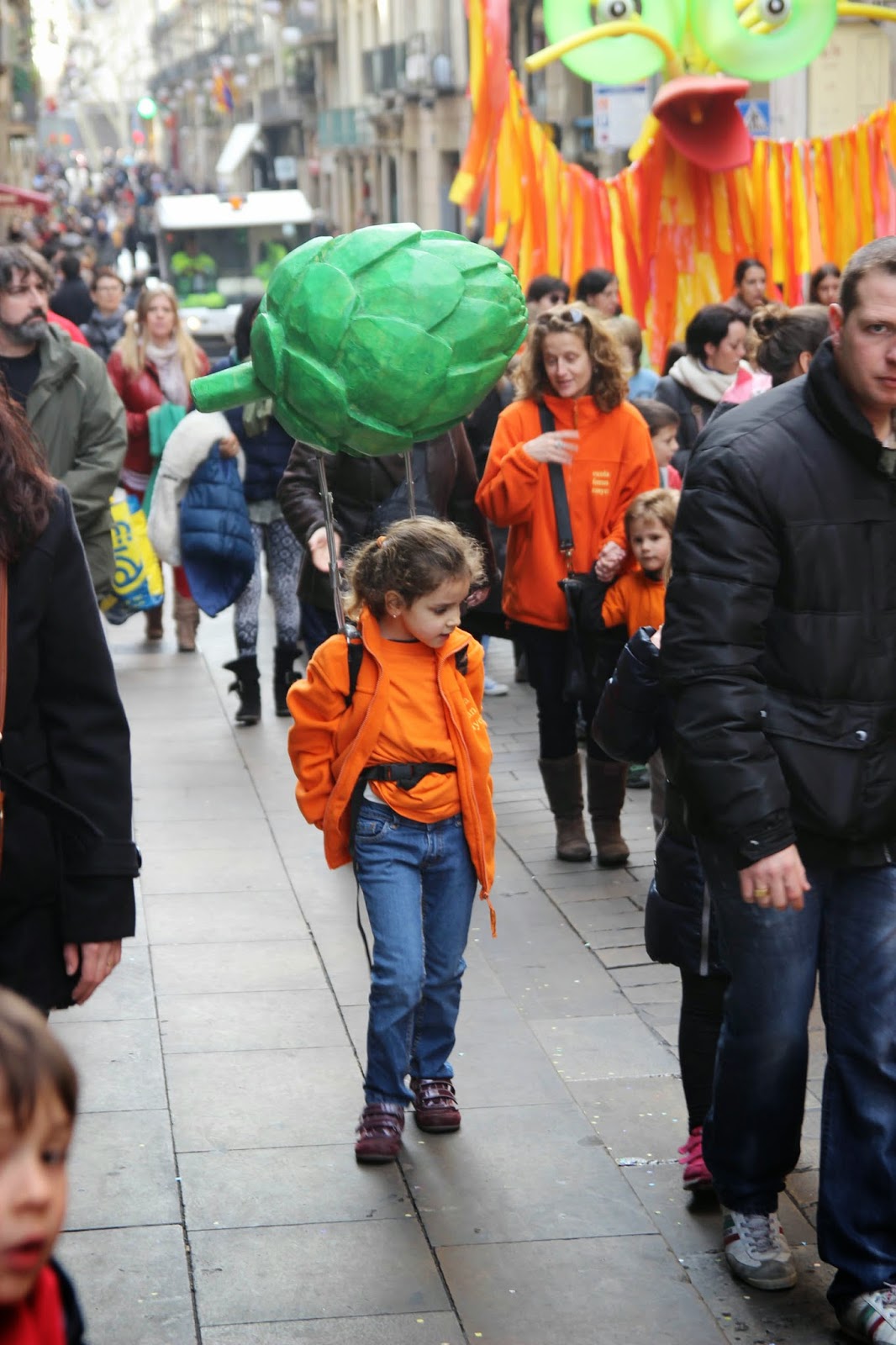 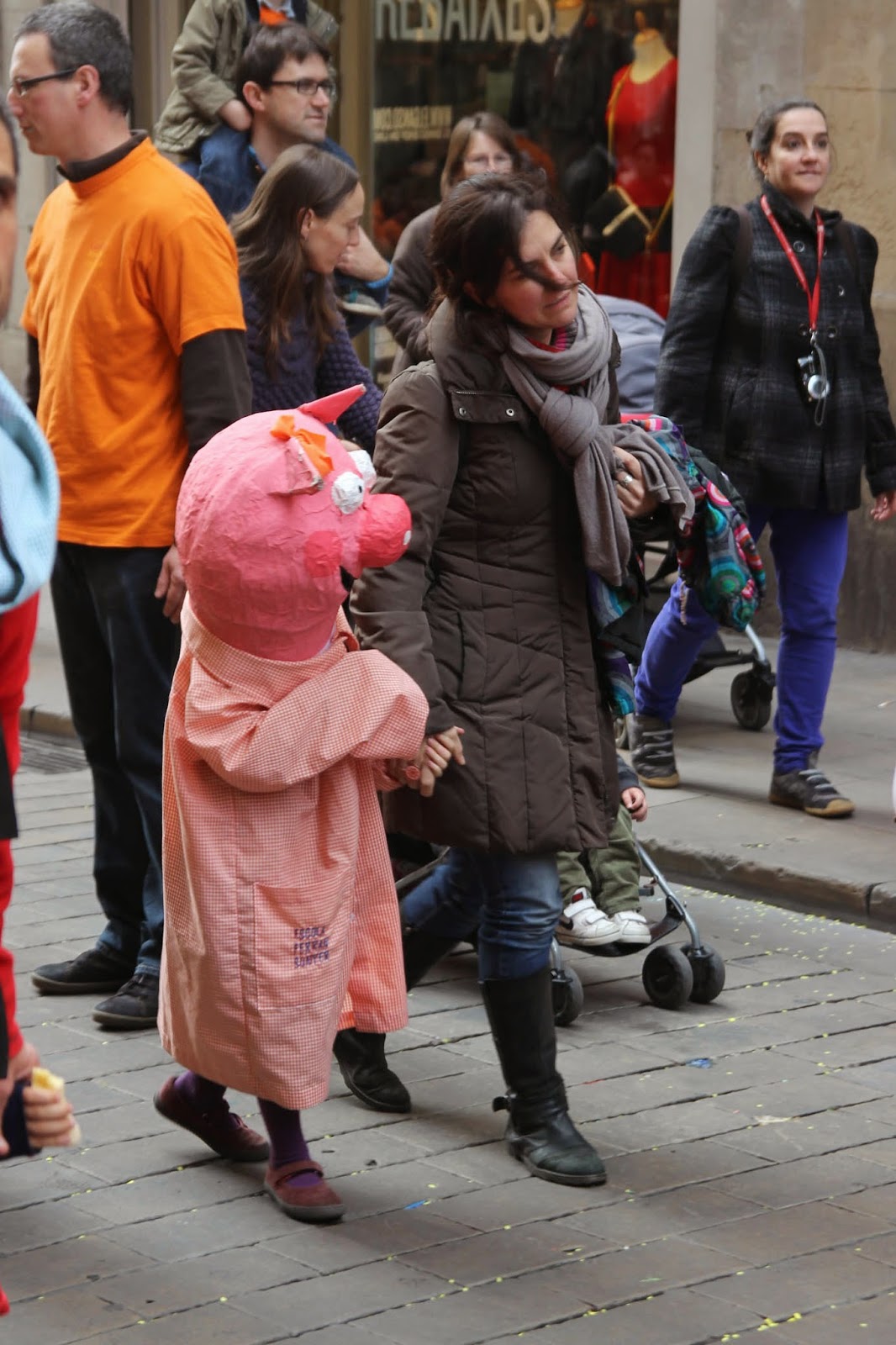 Later, as we walked through Plaza St. Jaume en route to the Picasso Museum, we spotted a stage set up where various groups perform traditional dances until it began to grow dark. 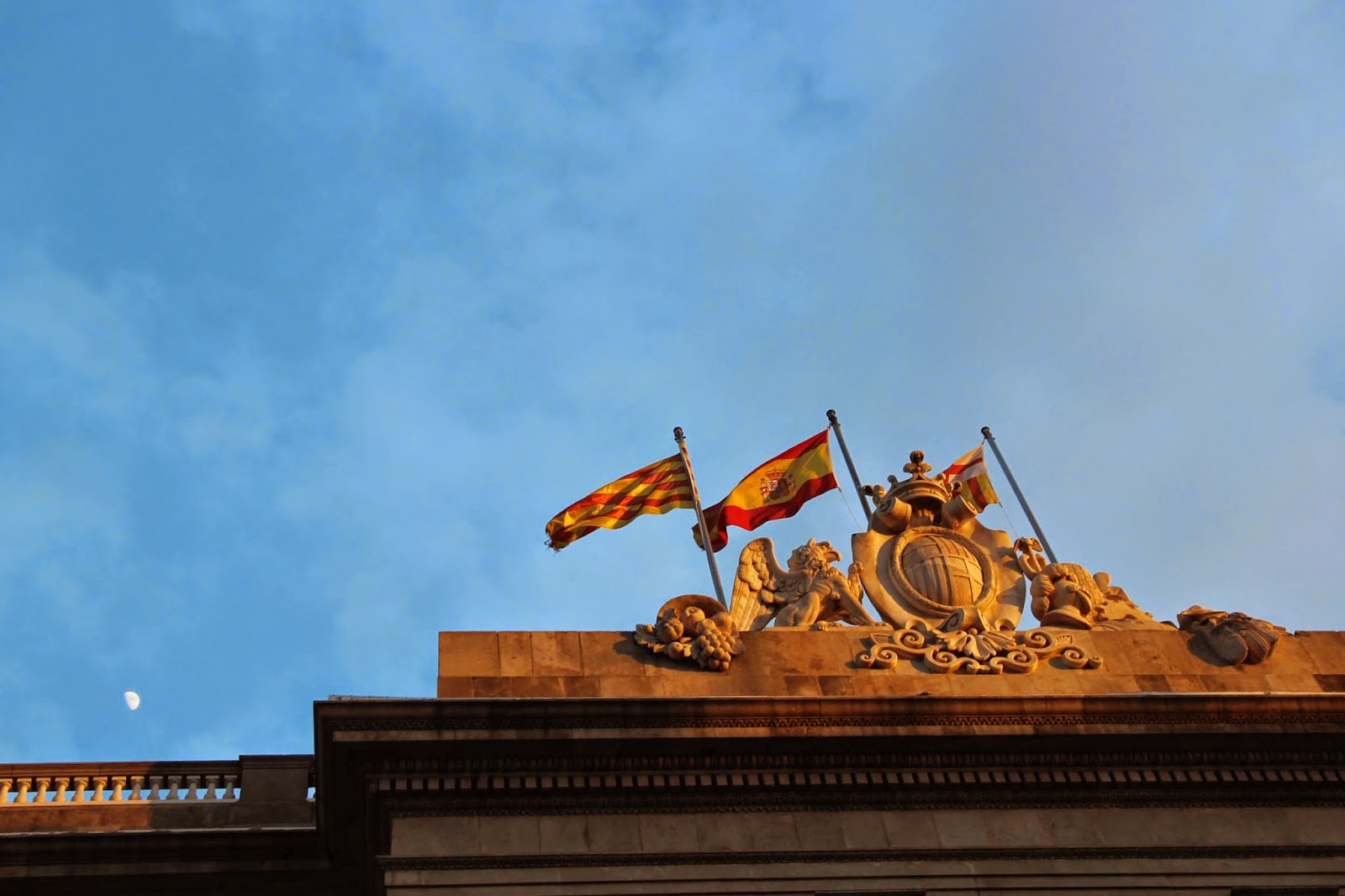 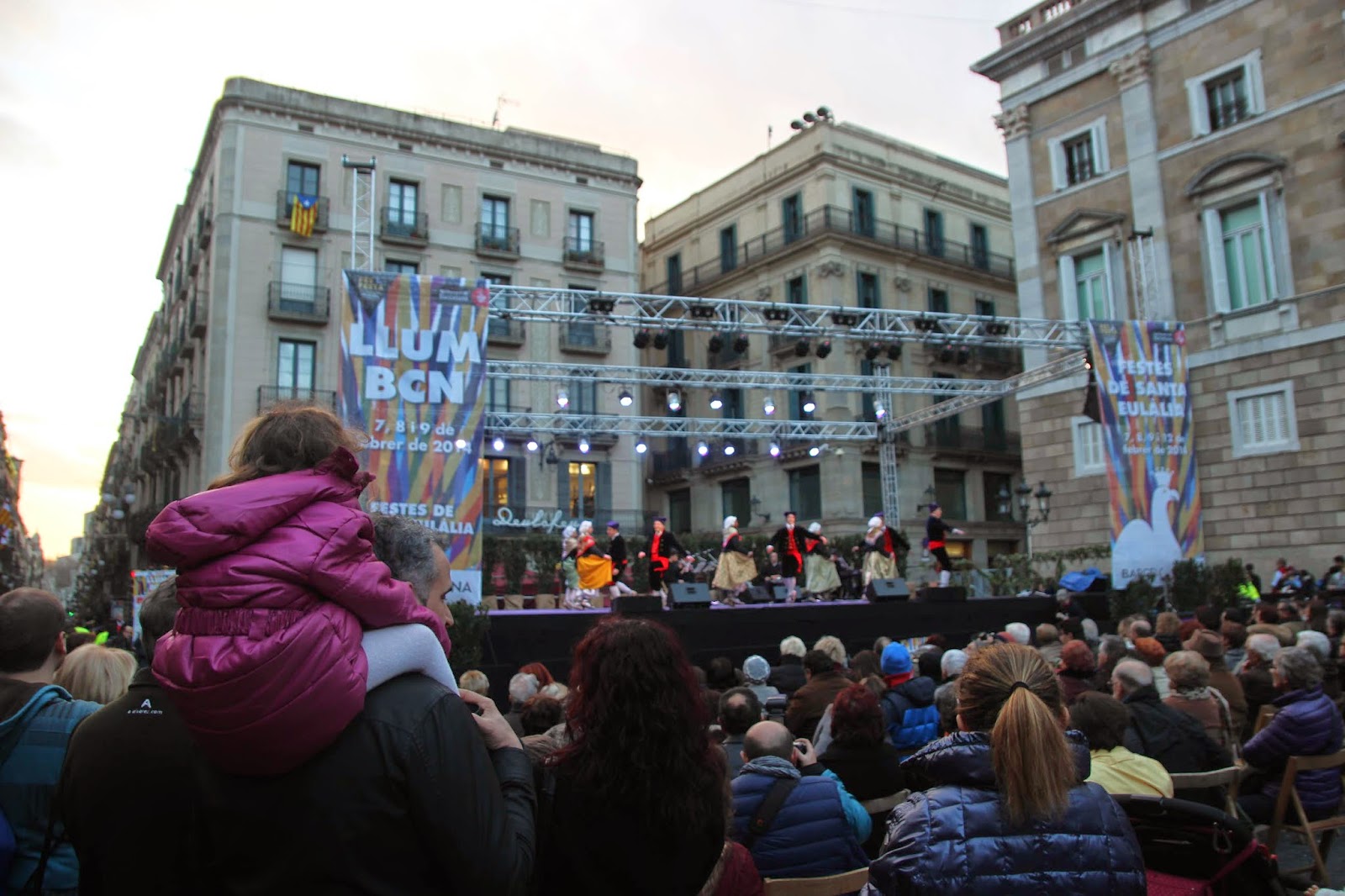 After the dance performances, another parade of drummers - a consistent theme that we noticed - began winding their way around the streets surrounding the square. 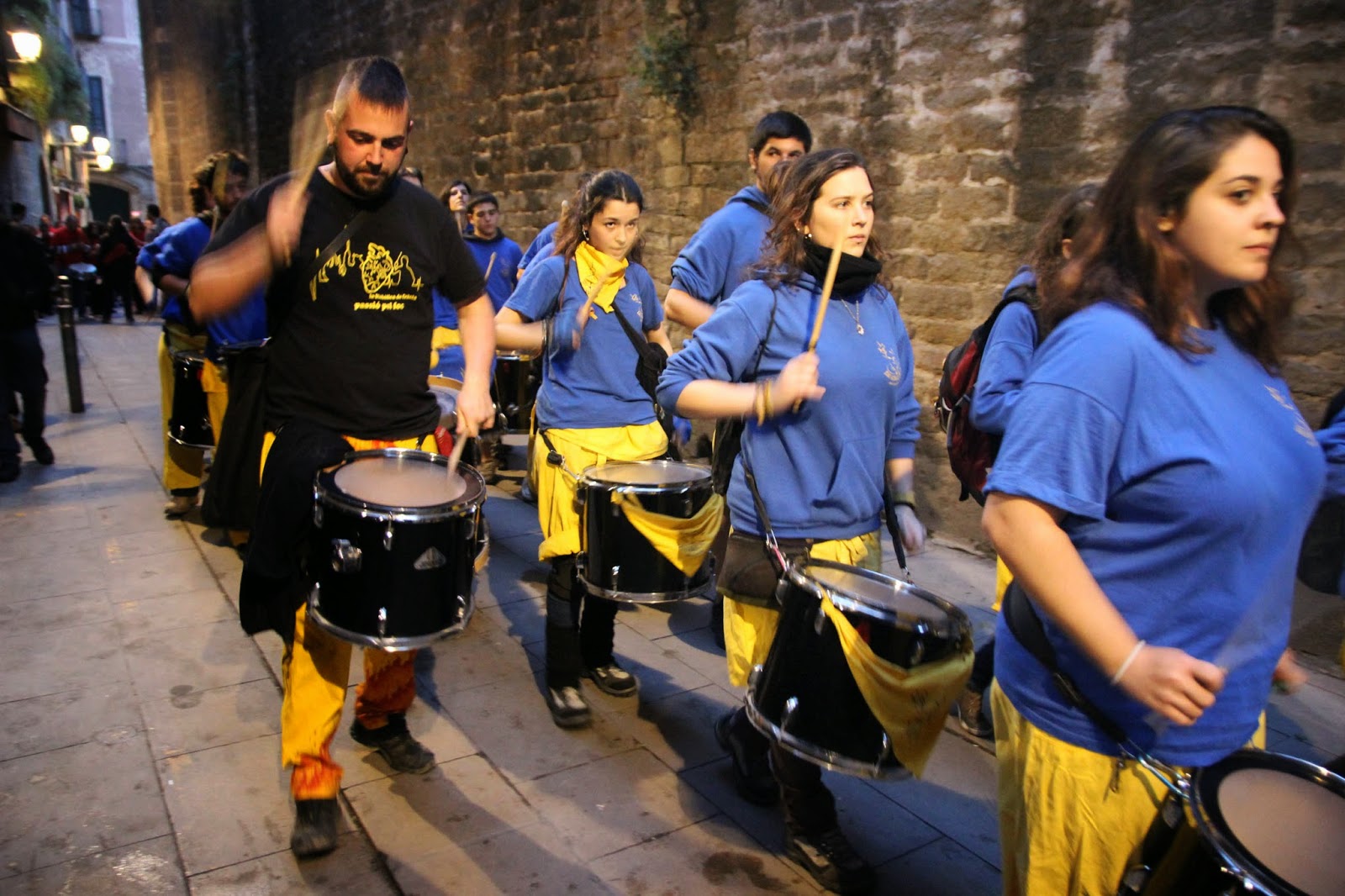 A few hours later, we noticed the plaza was now jam-packed with people, as they watched animated short films that had been projected onto the facade of one of the buildings in the square.  All three of the films shown utilized the structure of the building, and all were incredibly entertaining, unique, and inventive. 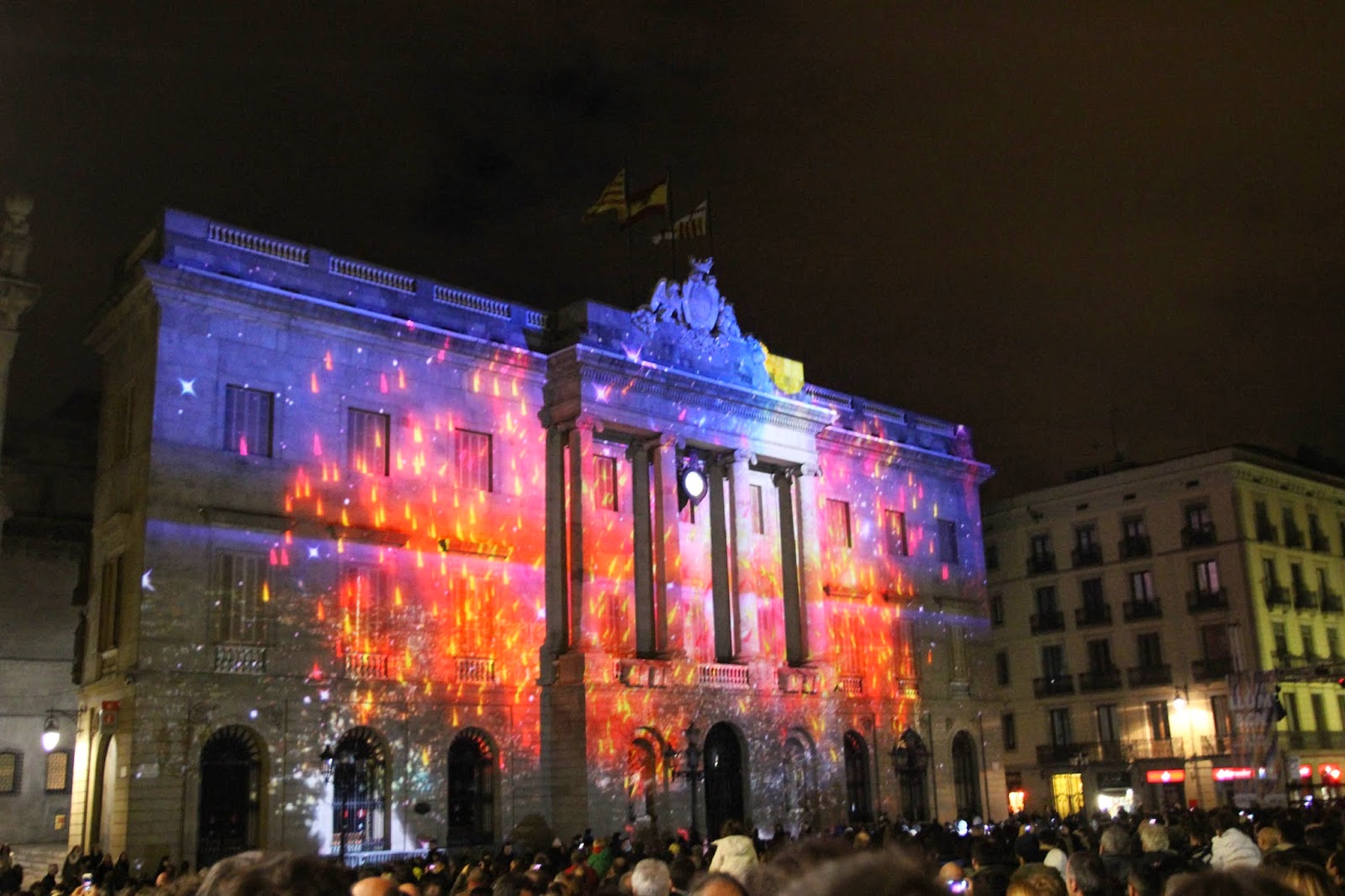 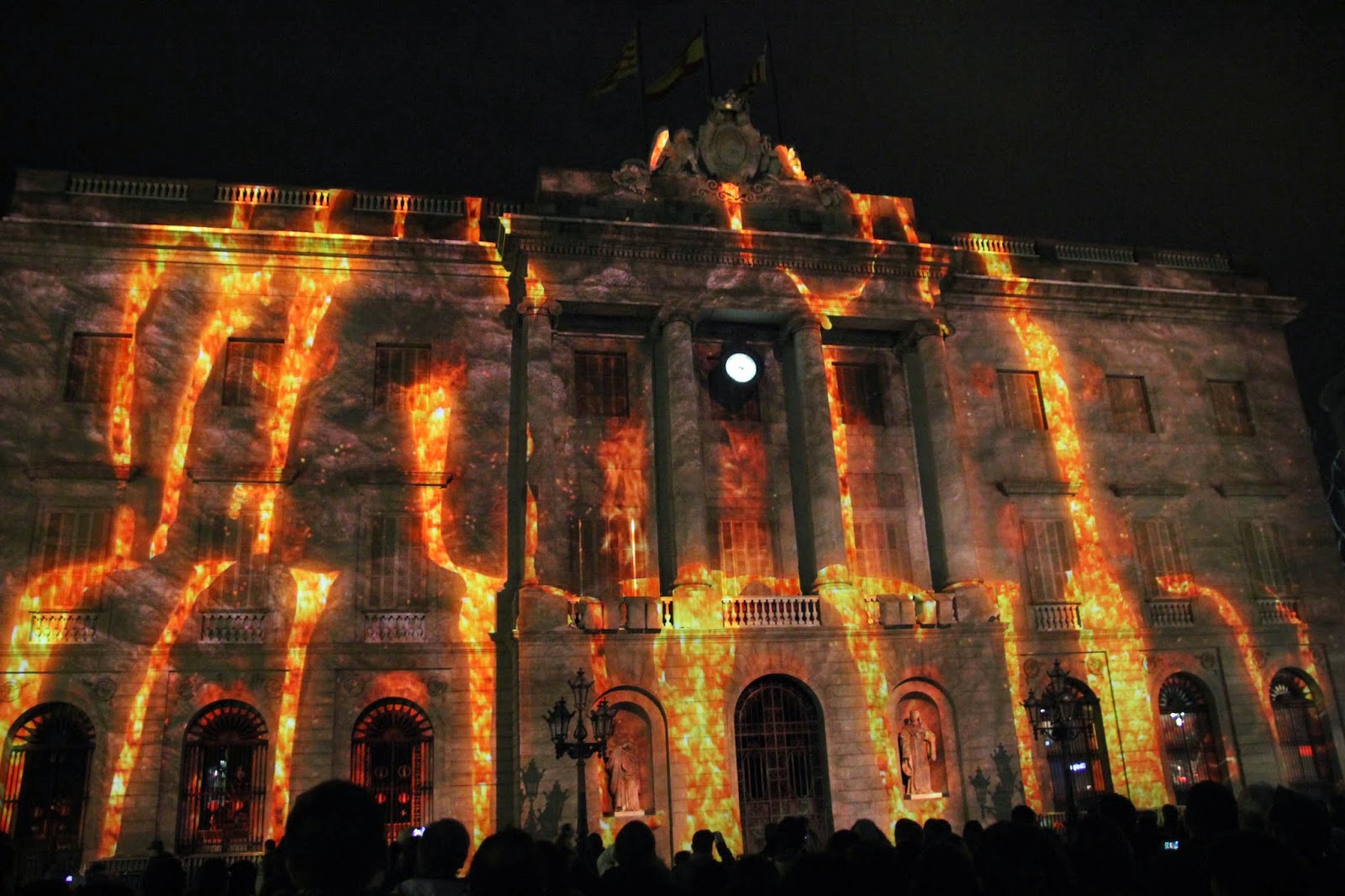 The following day, we found ourselves back in the Plaza St. Jaume after dark, and João happened to pick up on an announcement (in Catalan) saying something about the next portion involving fire and to participate at your own risk, so of course we wanted to stick around to see what it was all about.

Suddenly we saw the start of the parade, emerging from the opening in one of the large buildings in the square, a stream of locals playing drums, followed by young children in costumes wielding fireworks, spinning at the ends of long poles, like giant sparklers creating an umbrella of sparks over the children carrying them, until the fireworks were spent, going out with small pops.  Each time the fireworks ran out, the child would go running back to an adult (also in costume), to be given a new firework that would then be lit anew. 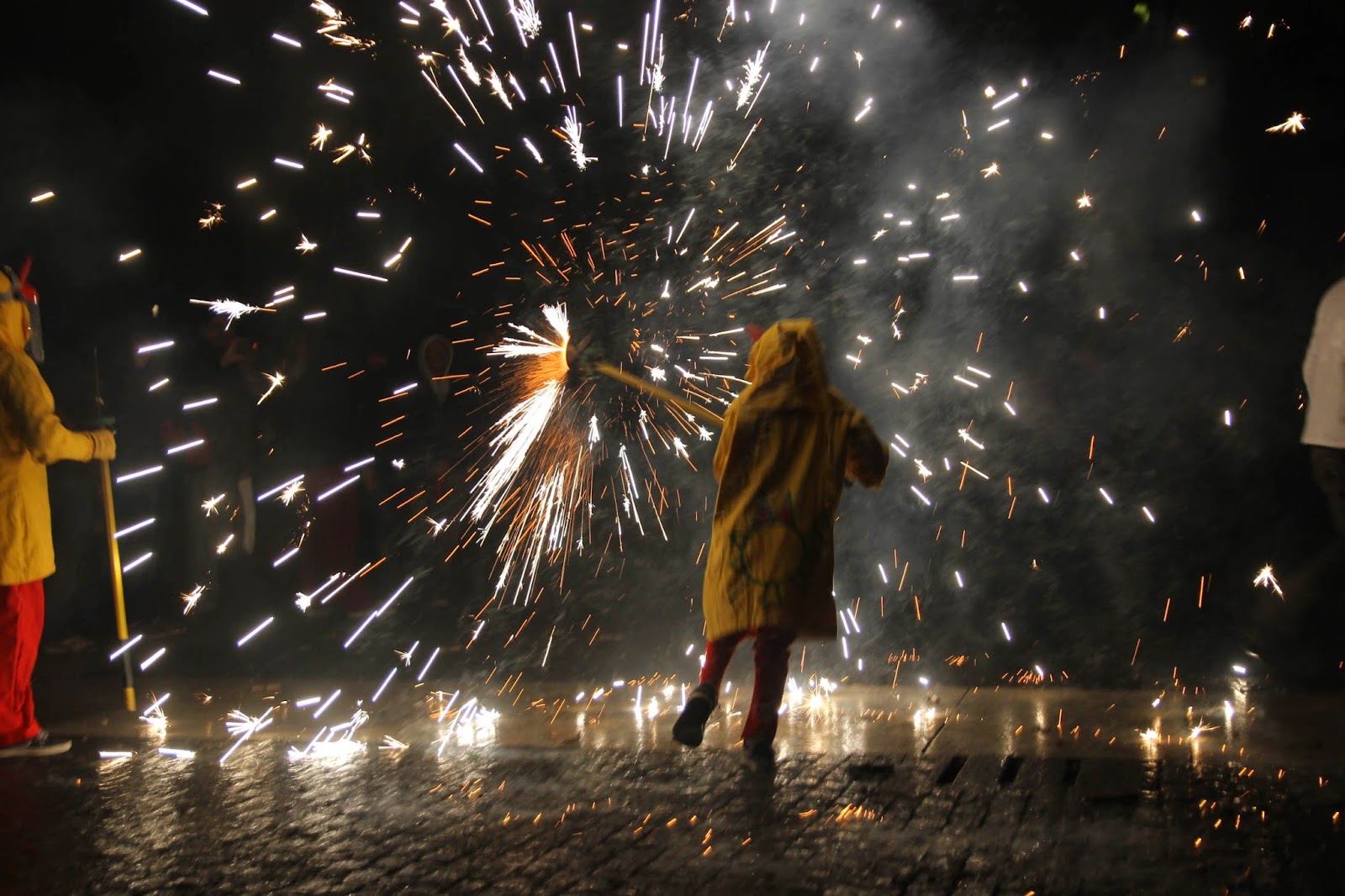 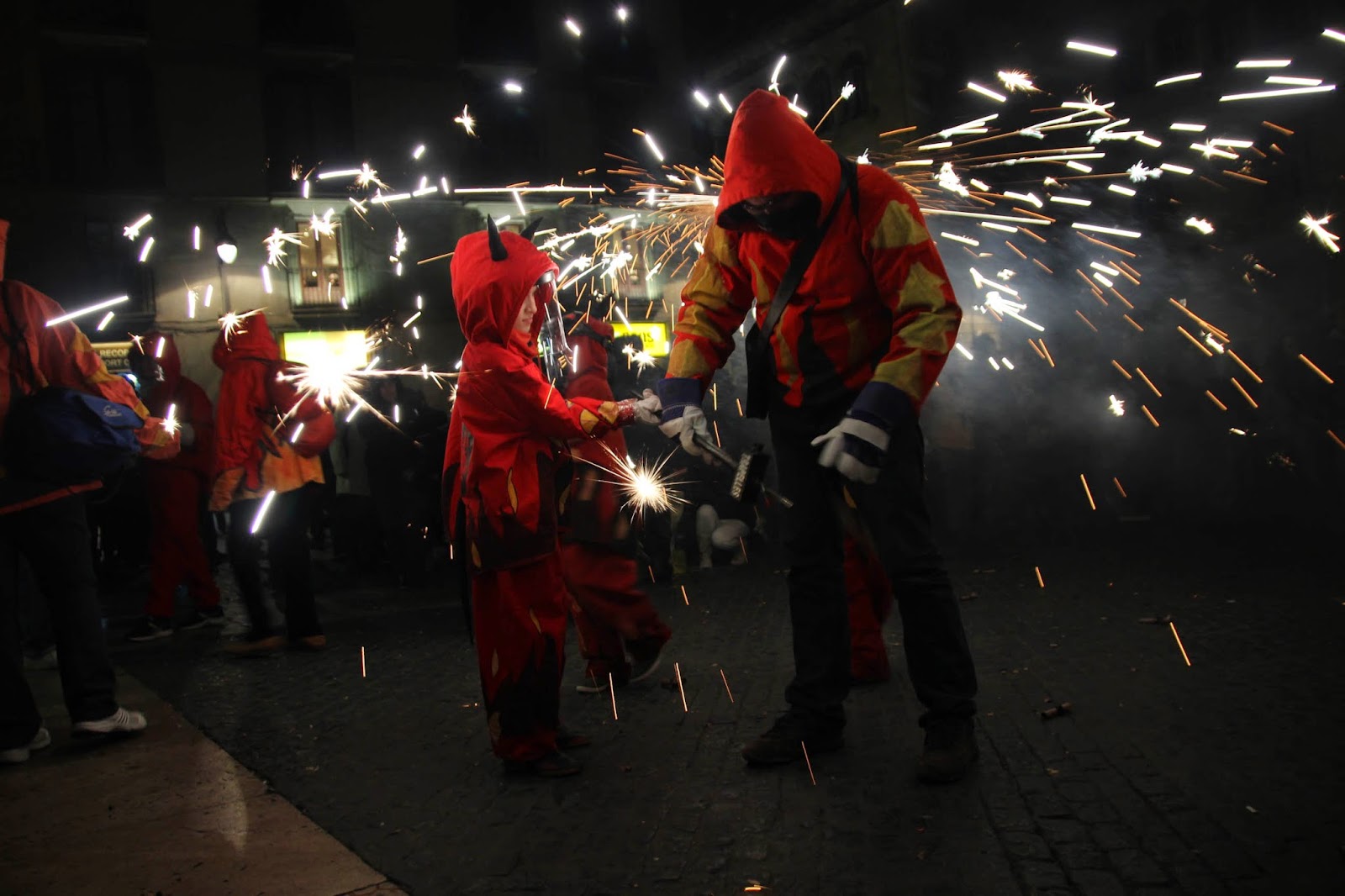 The children wore outfits that resembled miniature devils - colored jumpsuits with hoods and goggles and little horns, wearing large gloves, allowing them to run and leap and hop around under their showers of sparks without any potential for danger. 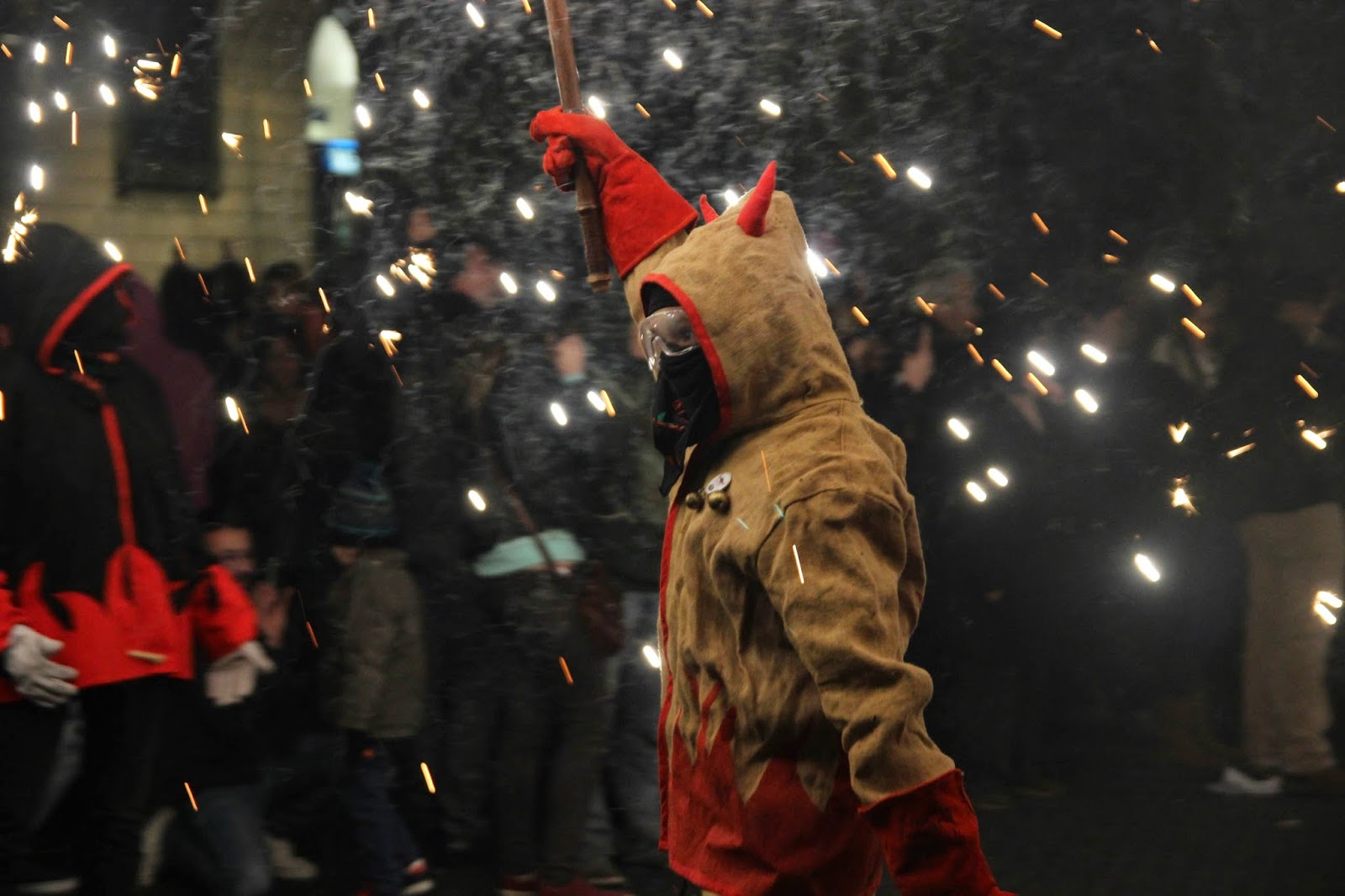 As the procession made its way through the square, parents and children and casual observers (like ourselves) would dash out, ducking under the umbrellas of sparks, trying to keep up as the children danced around. 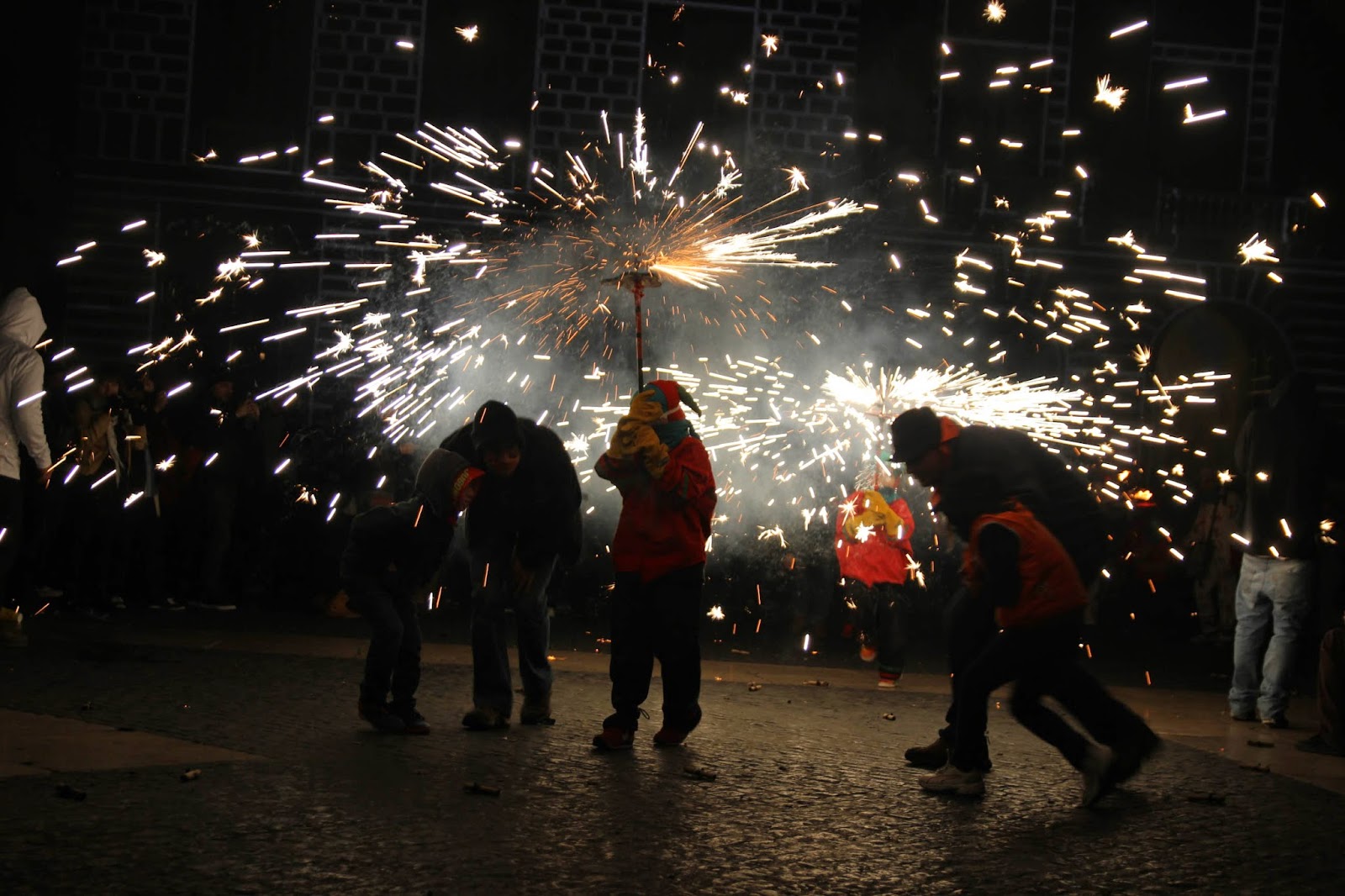 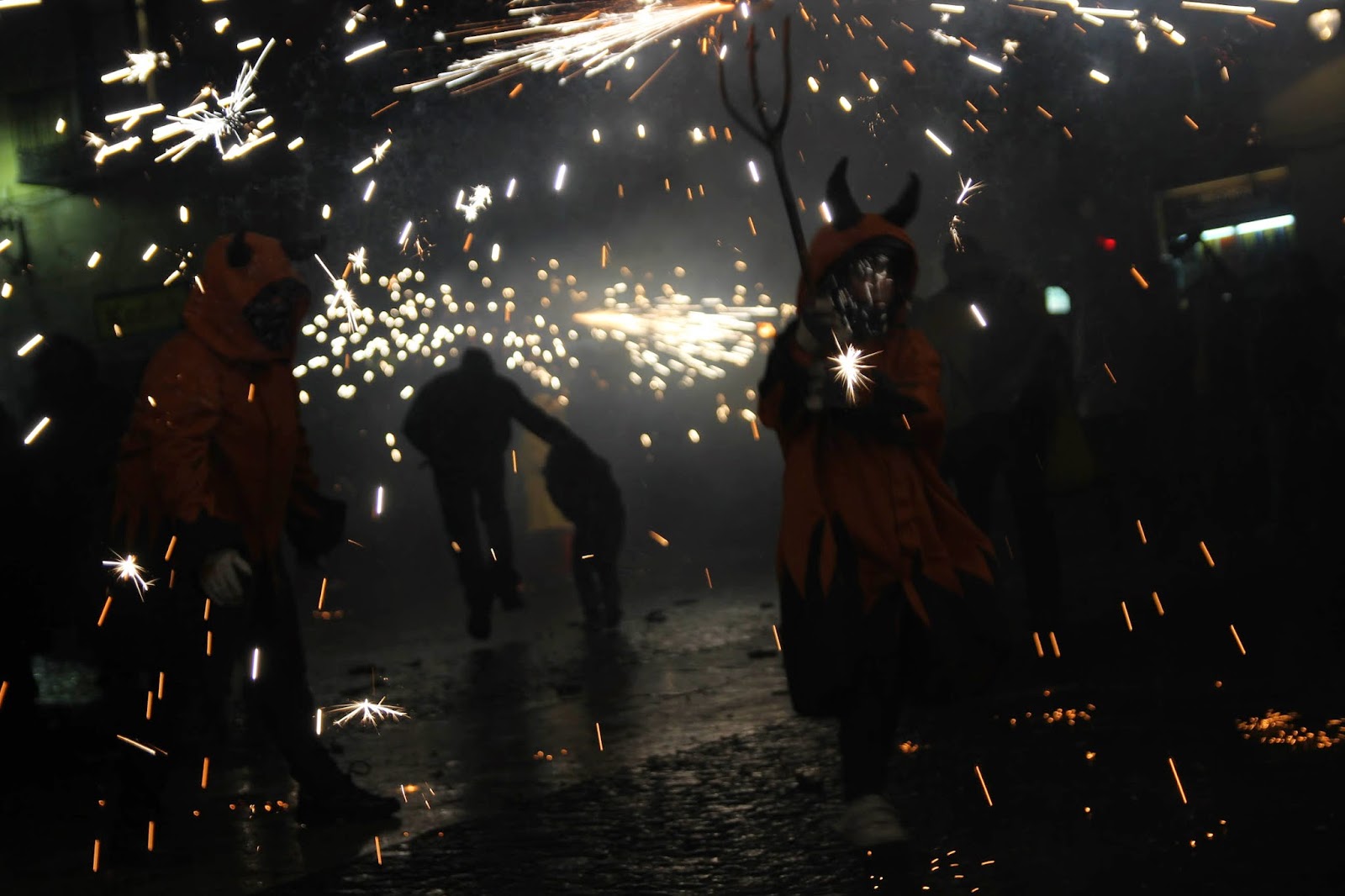 Occasionally a figure would emerge - usually large dragons -carried, pulled, or worn by adults in the groups, with their own sets of fireworks, shooting dozens of sparks into the crowd before quickly burning out and advancing forward again. 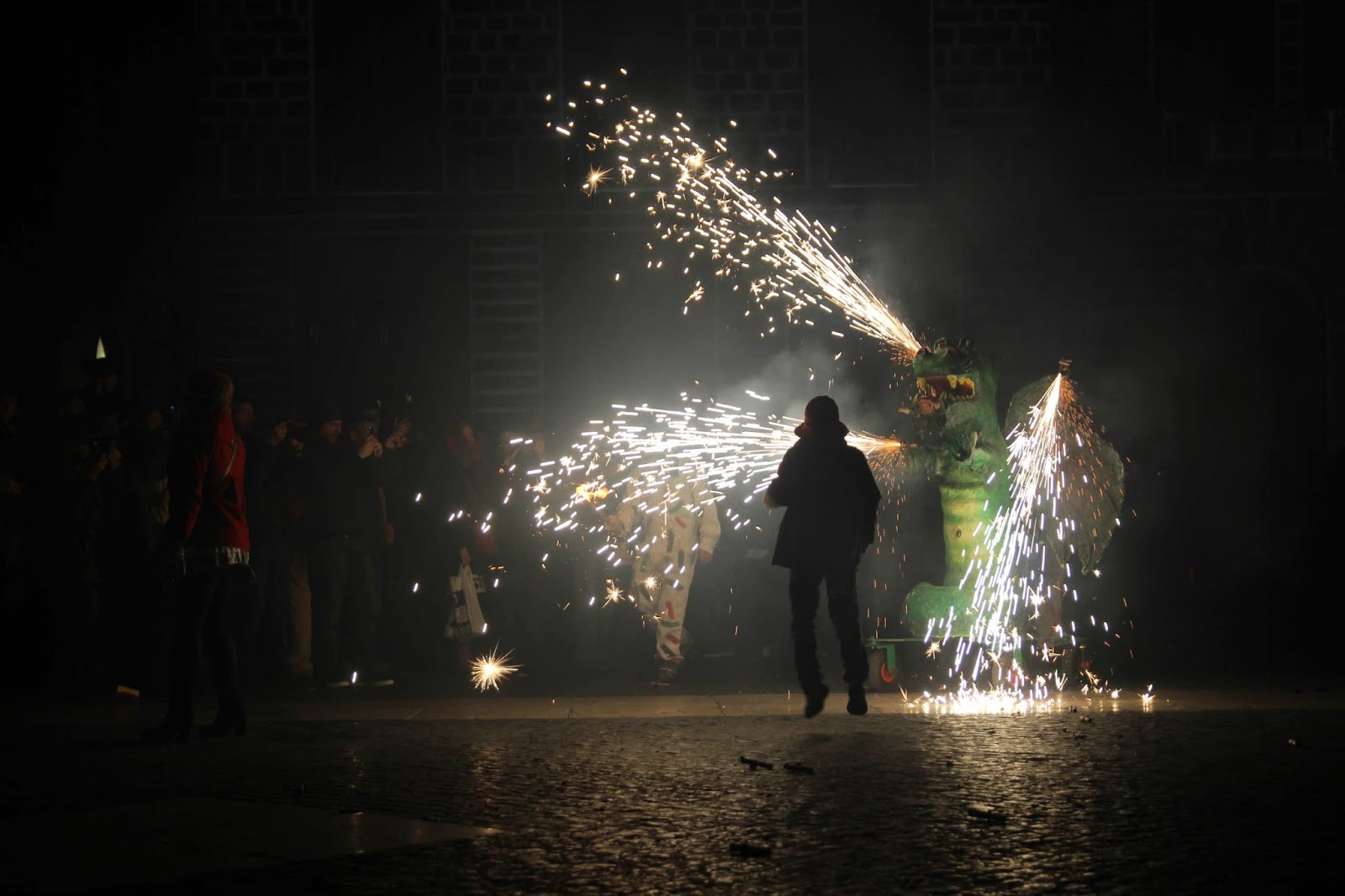 We stayed for nearly the entire parade, eyes wide with wonder and grinning like children as we watched and snapped photos and dashed in and out from under the sparks ourselves.  We finally tore ourselves away as it started raining, just catching one of the last of the giant figures - a sort of dragon-human figure with fireworks sprouting from its mouth. 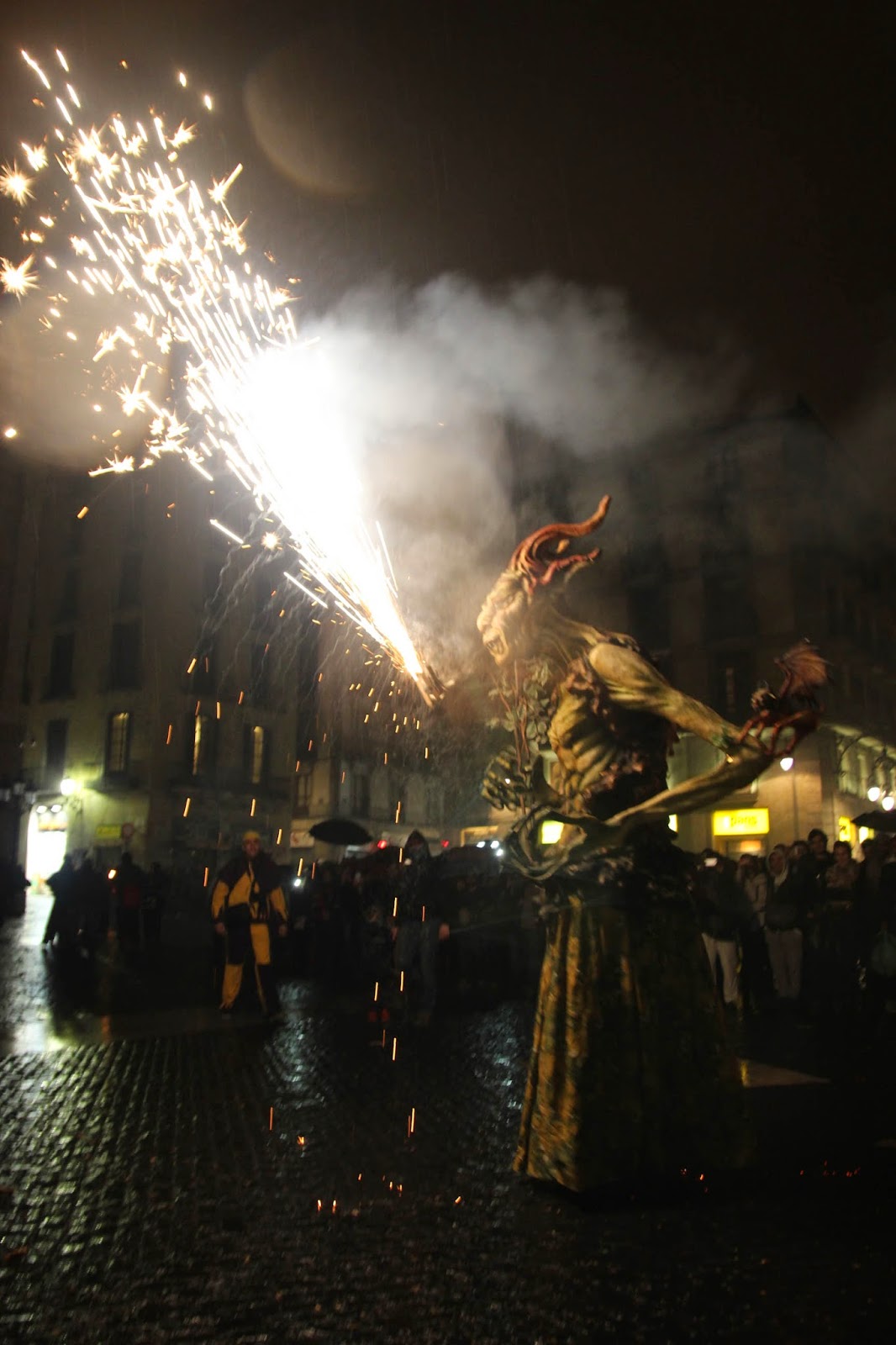 While completely unplanned, the Santa Eulalia festival became one of our favorite activities of our entire visit to Barcelona.  The energy and the cultural pride of the people all around us was so beautiful to witness, and the events themselves were incredible and unique, both simple and surprising, altogether awe-inspiring.

More information on the Santa Eulalia festival in Barcelona can be found here.

Posted by Outlander Abroad at 7:39 AM