Chiang Rai and the Long Boat to Laos

Chiang Rai became my last stop in Northern Thailand, as I needed to spend a few days there to organize my crossing into Laos, catching a long boat for a two day journey to the town of Luang Prabang.  While my minivan journey from Phayao was relatively short, I was left laughing at the absurdity of my height as the only westerner in the van, compared to all the other locals.  As I climbed in, there were two empty seats - an open window seat, and just behind it, an aisle seat where a lady had set a small bag.  I gestured to the aisle seat, and the lady gestured to the open window seat in response.  I smiled and pointed to the length my legs, and she smiled and moved the bag.  When I sat down, she started full on giggling, as my knees, when facing forward, were jammed against the back of the seat in front of me, while she likely had room for another person of her size to have walked through the space between her and the seat!

I had booked a brand new hostel - Happy Nest - in Chiang Rai at the recommendation of my friends in Phayao, and I was delighted to not only find a charming cafe on the first floor, but also to discover I had an entire dorm to myself!  I spent the first day in town visiting a clock tower designed by Chalermchai Kositpipat, who also constructed the White Temple, enjoying a tasty cheeseburger at Hungry Wolf, booking both the longboat and transport to the Laos border, and finally exploring a bit of the night market, a short walk from my hostel. 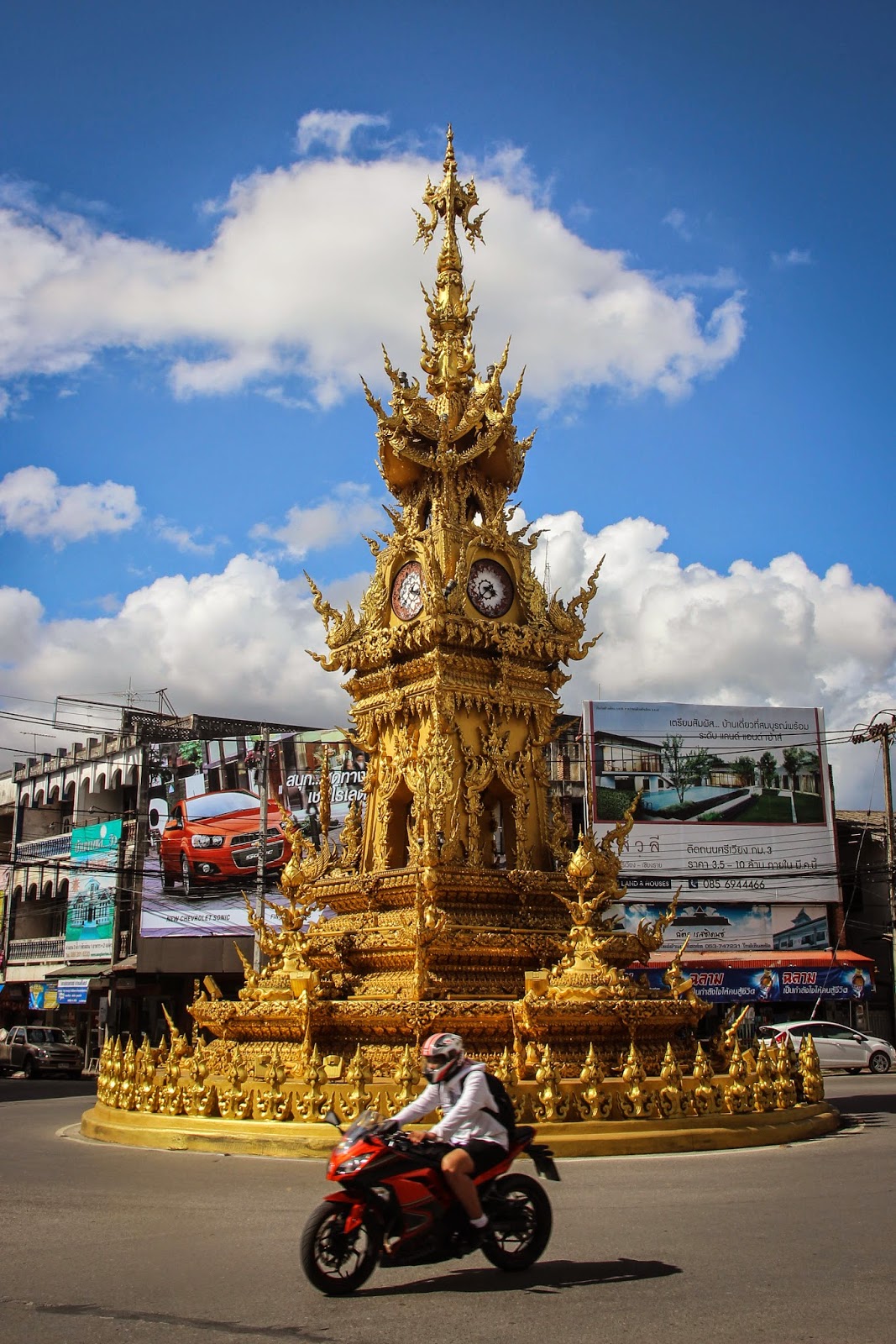 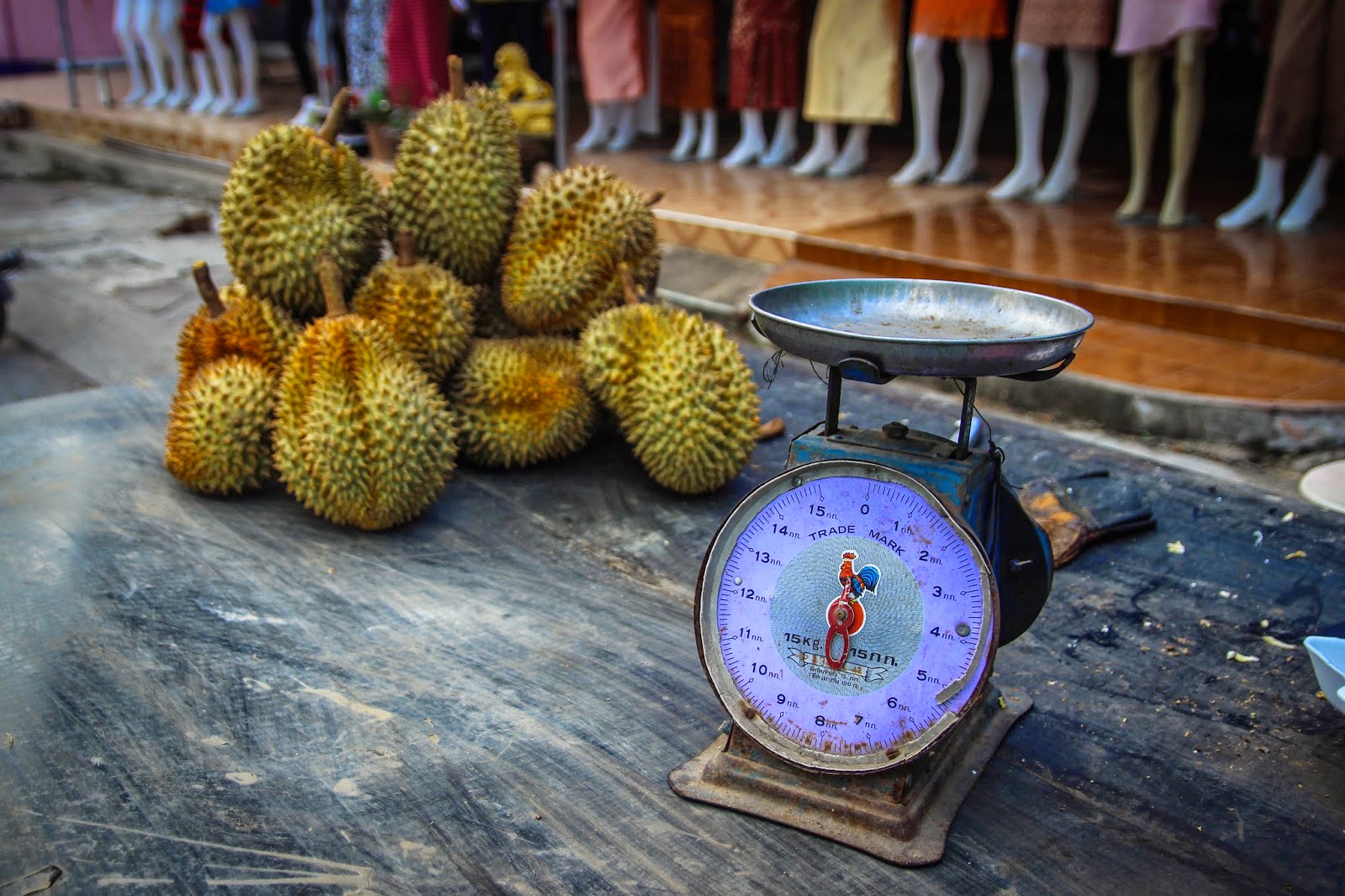 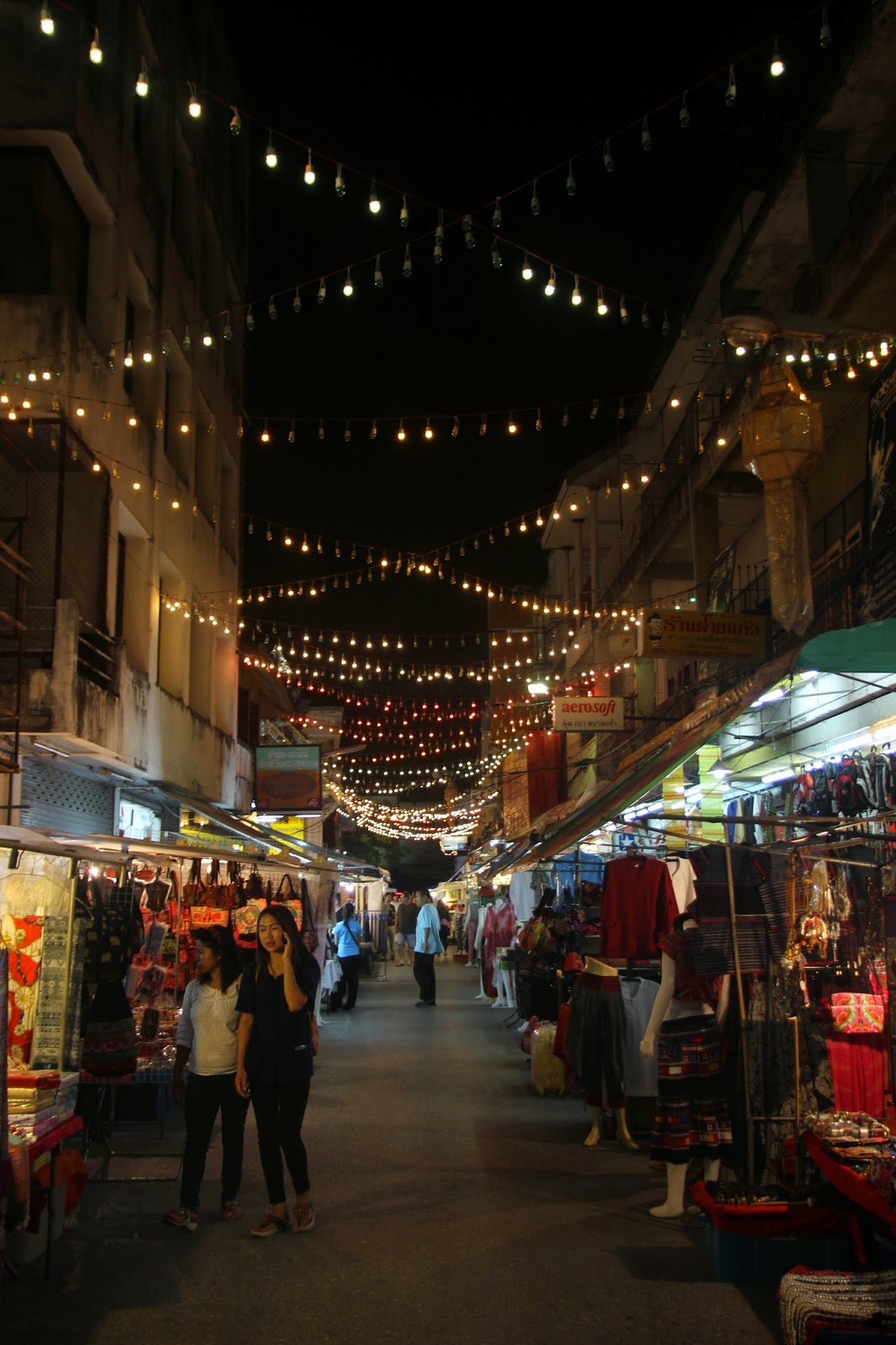 The following day I decided to see the major tourist site - renting a motorbike and zipping out to the White Temple (Wat Rong Khun) in the morning.  About halfway through the long ride, it started absolutely pouring rain!  I quickly pulled over under a shelter, pulling on a poncho over my rain jacket to cover my lap and legs, the plastic billowing behind me like a sail as I continued down the road.  Luckily I arrived not long after, and the rain quickly dissipated, staying away for the rest of the day.

I was surprised at how close to the road the structure was, and actually, how small it was.  It was truly a bizarre sight, the modern white artistic elements outlined in reflective white mirror-like pieces.  I interpreted the outer sections of the temple to be a sort of depiction of hell (the artist describes it as being representative of the temptations we have to pass through), with the heads of recognizable demonesque figures from Hollywood hanging from a tree, and two pools of creepy, grotesque hands, reaching up from outside the entrance to the temple. 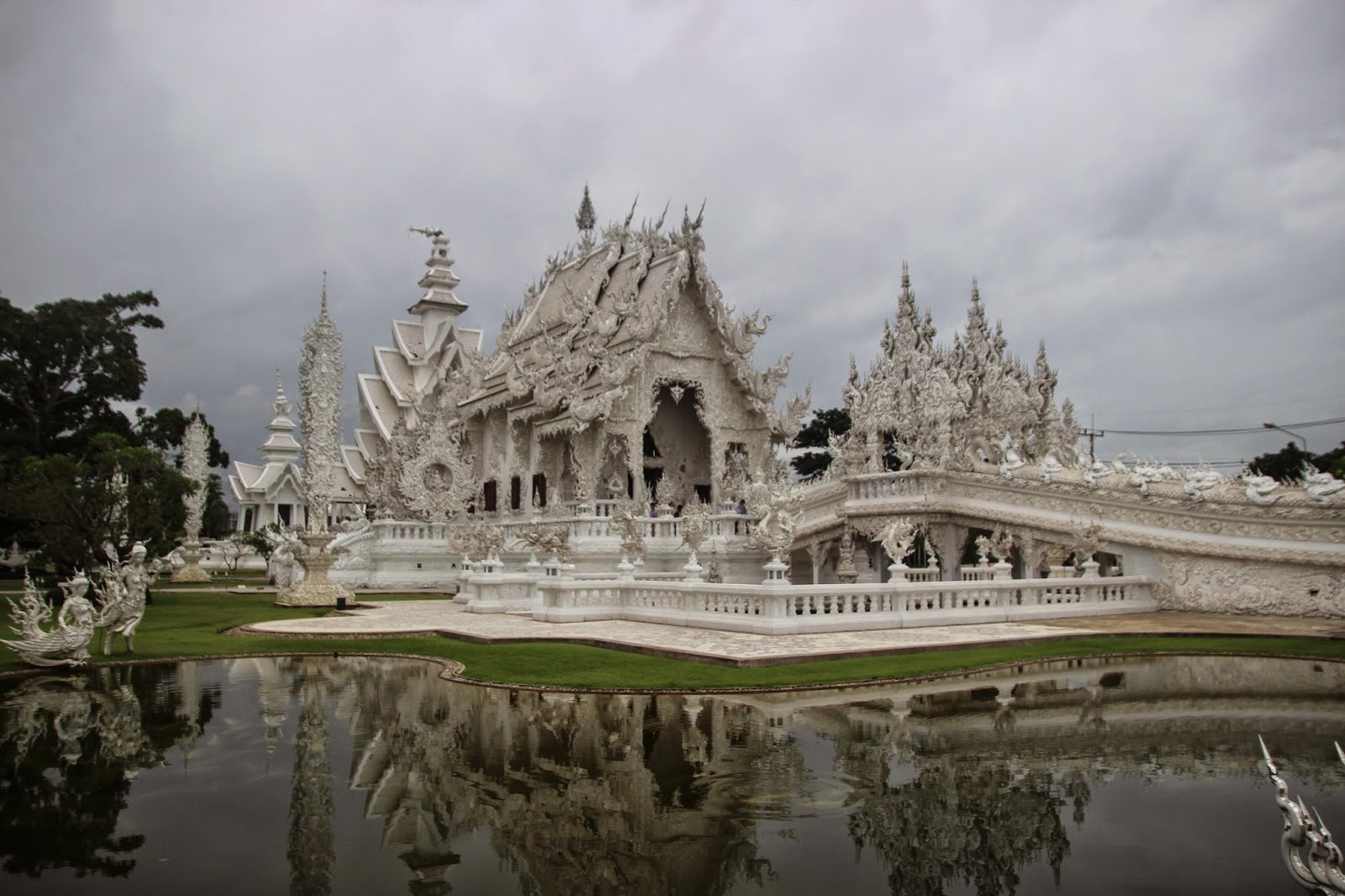 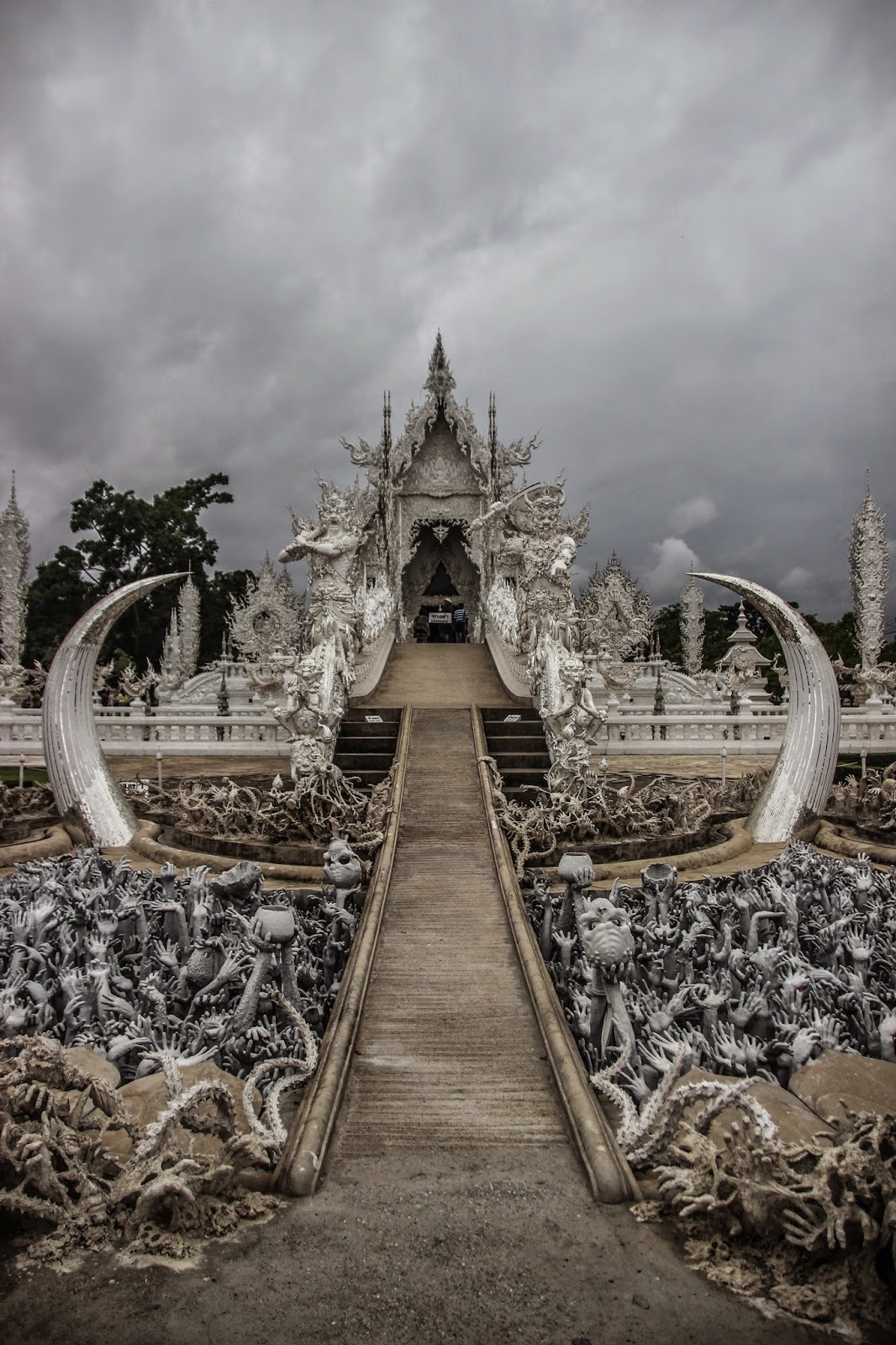 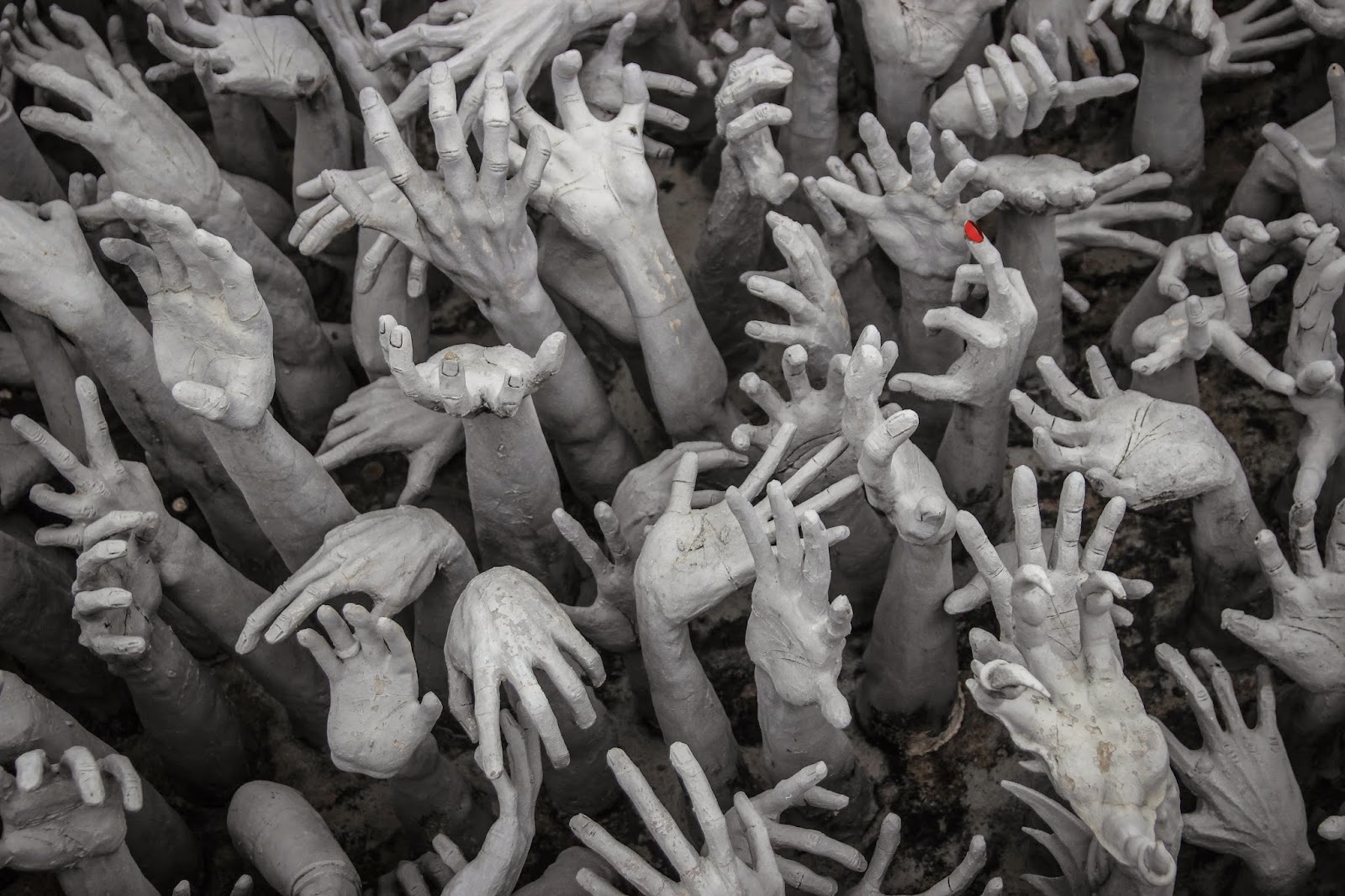 A ramp led up over the "pools", past two typical Thai figures in warrior poses, over an actual pool of water to the small temple.  Inside, the walls were colorful, with modern, surrealist, and realistic details.  The back wall reflected more hellish and materialistic items, from demons swirling around the Twin Towers as they are falling, to a dancing Michael Jackson, Harry Potter, and even a minion.  In front of the central Buddha figure at the front of the temple was a wax figure of a monk that was just as creepy in its realism! 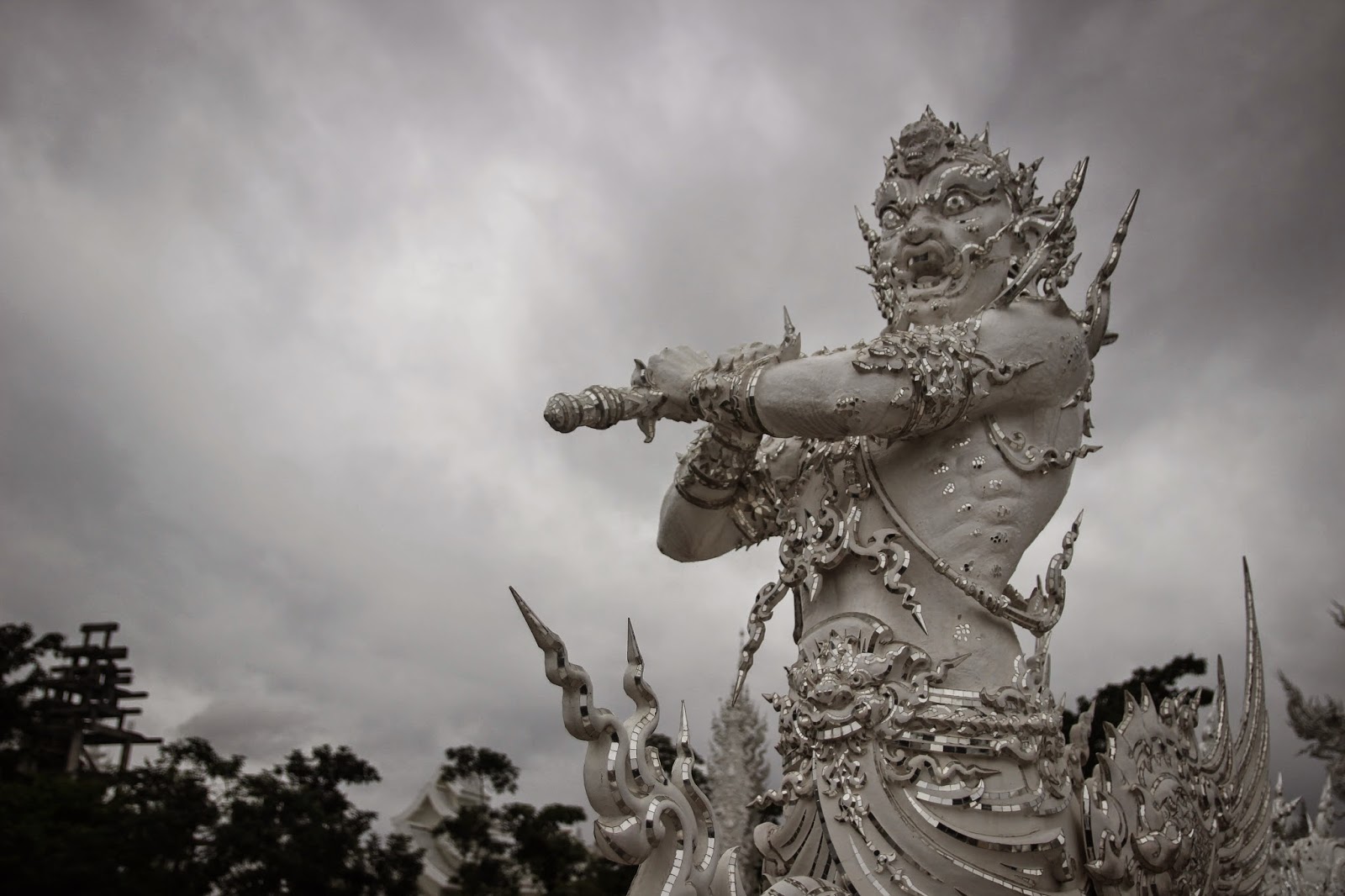 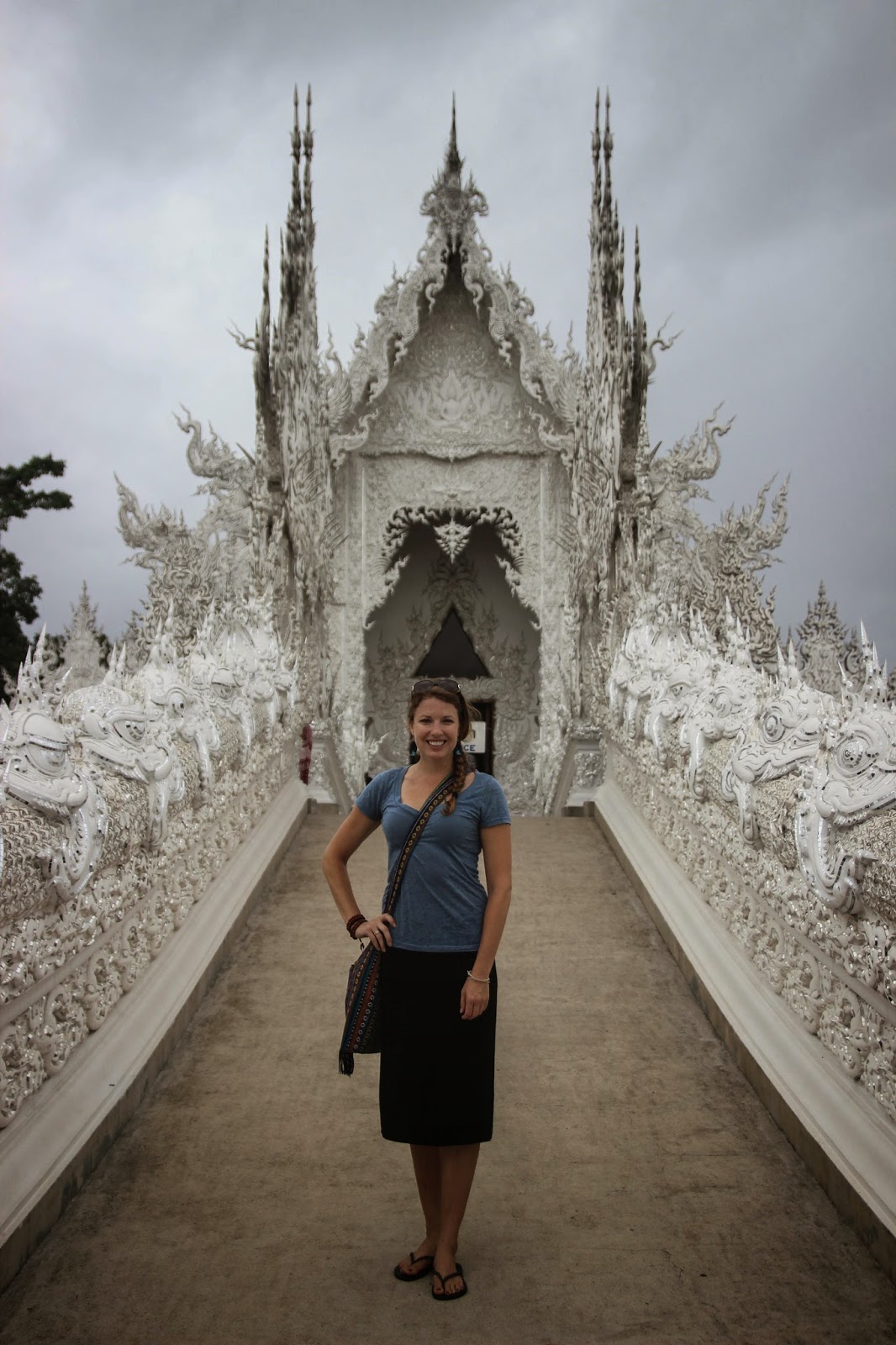 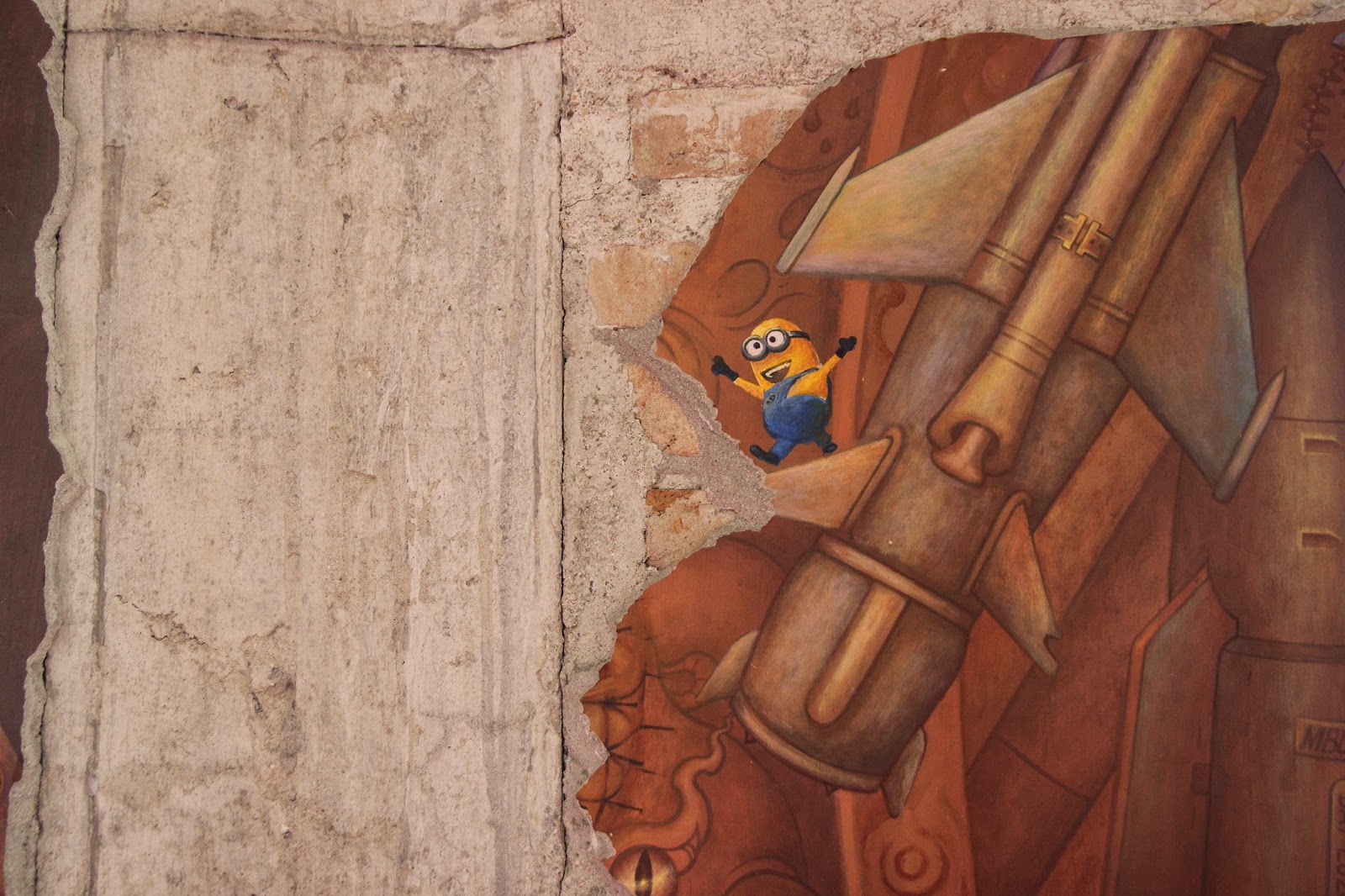 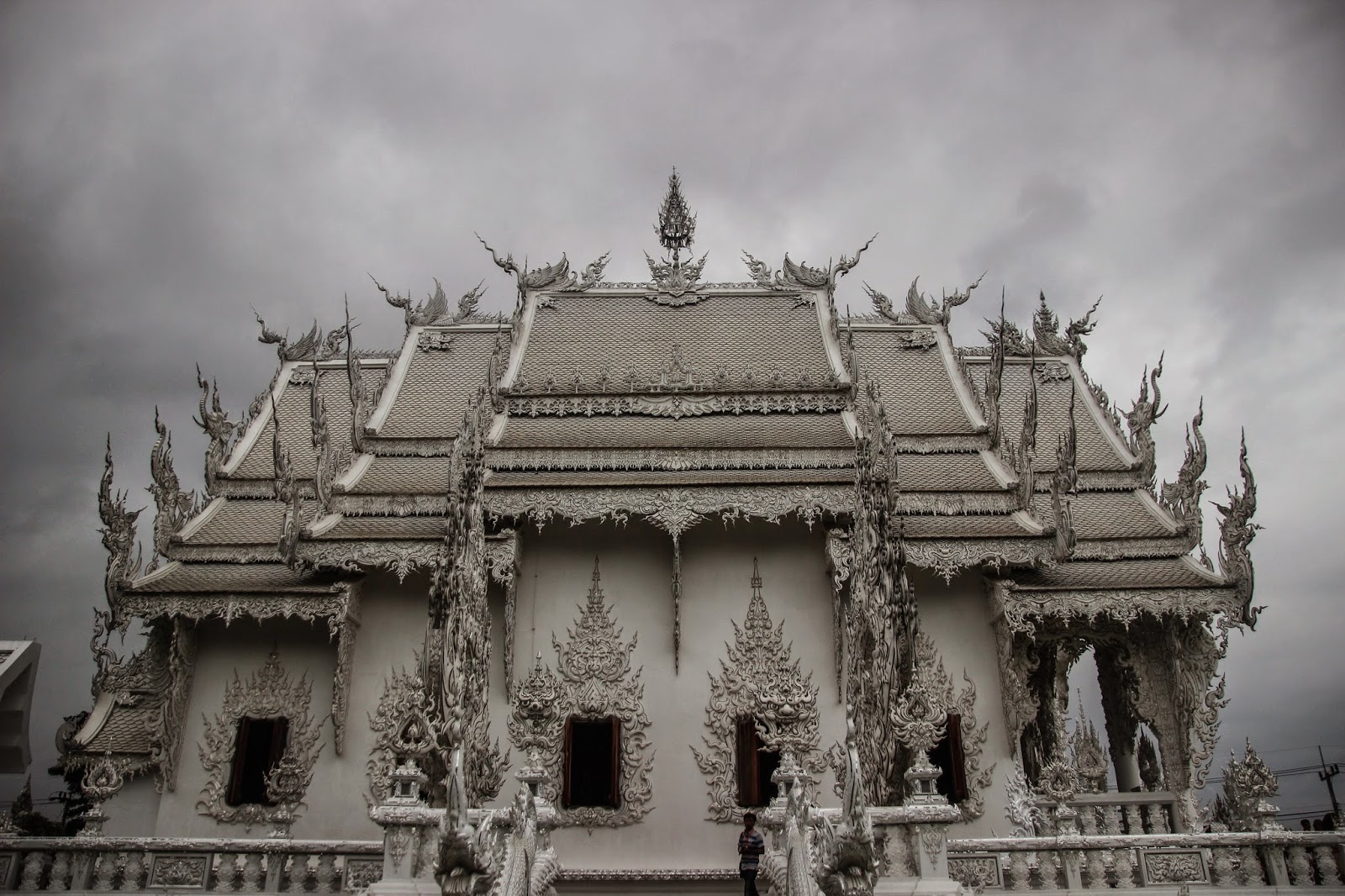 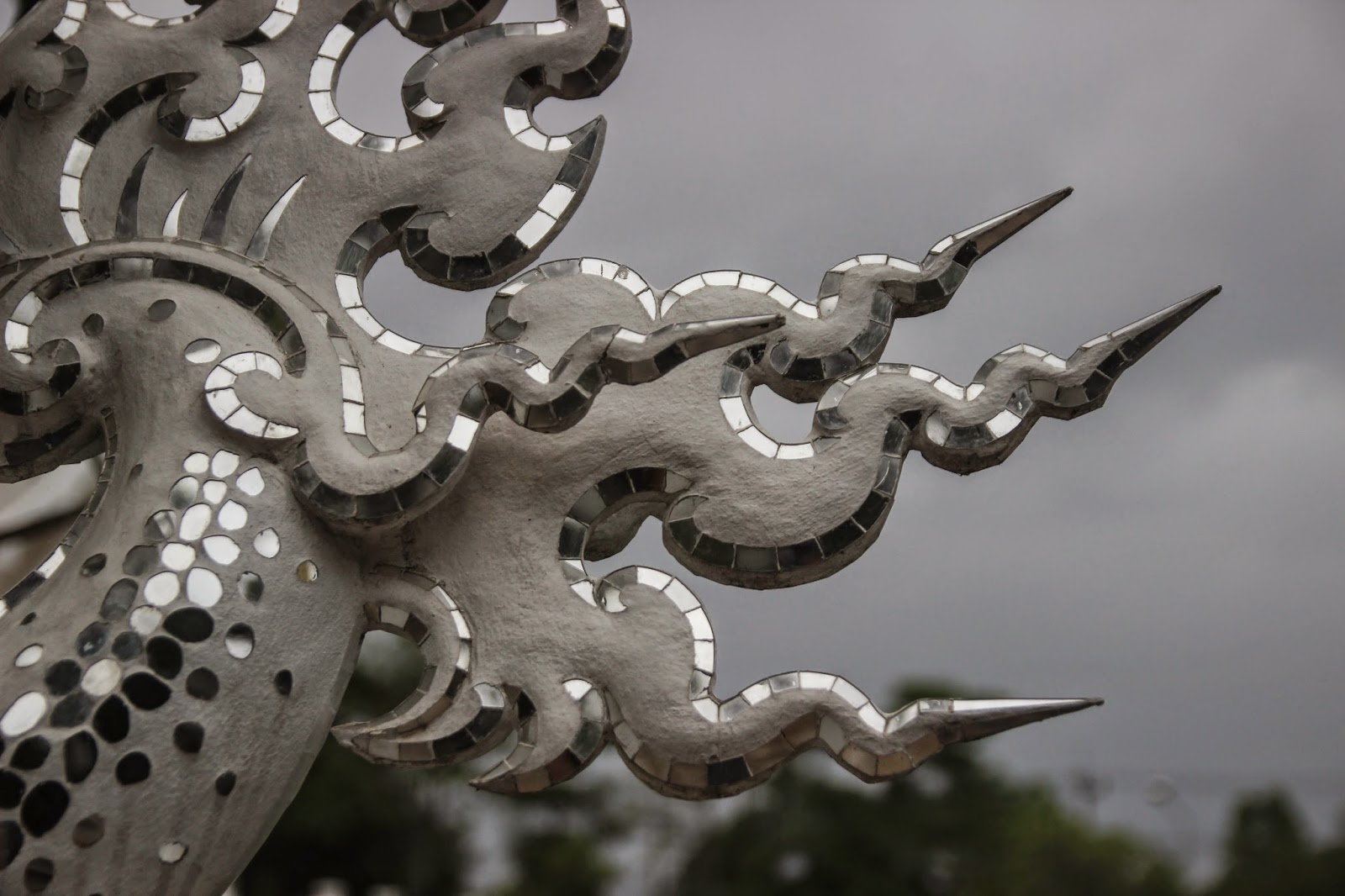 Outside the small temple, there were other buildings, clearly unfinished and some damaged from the recent earthquake (as was the temple itself).  To the side was a small gazebo with a wishing well in the middle, surrounded by little bells with metal leaves attached. 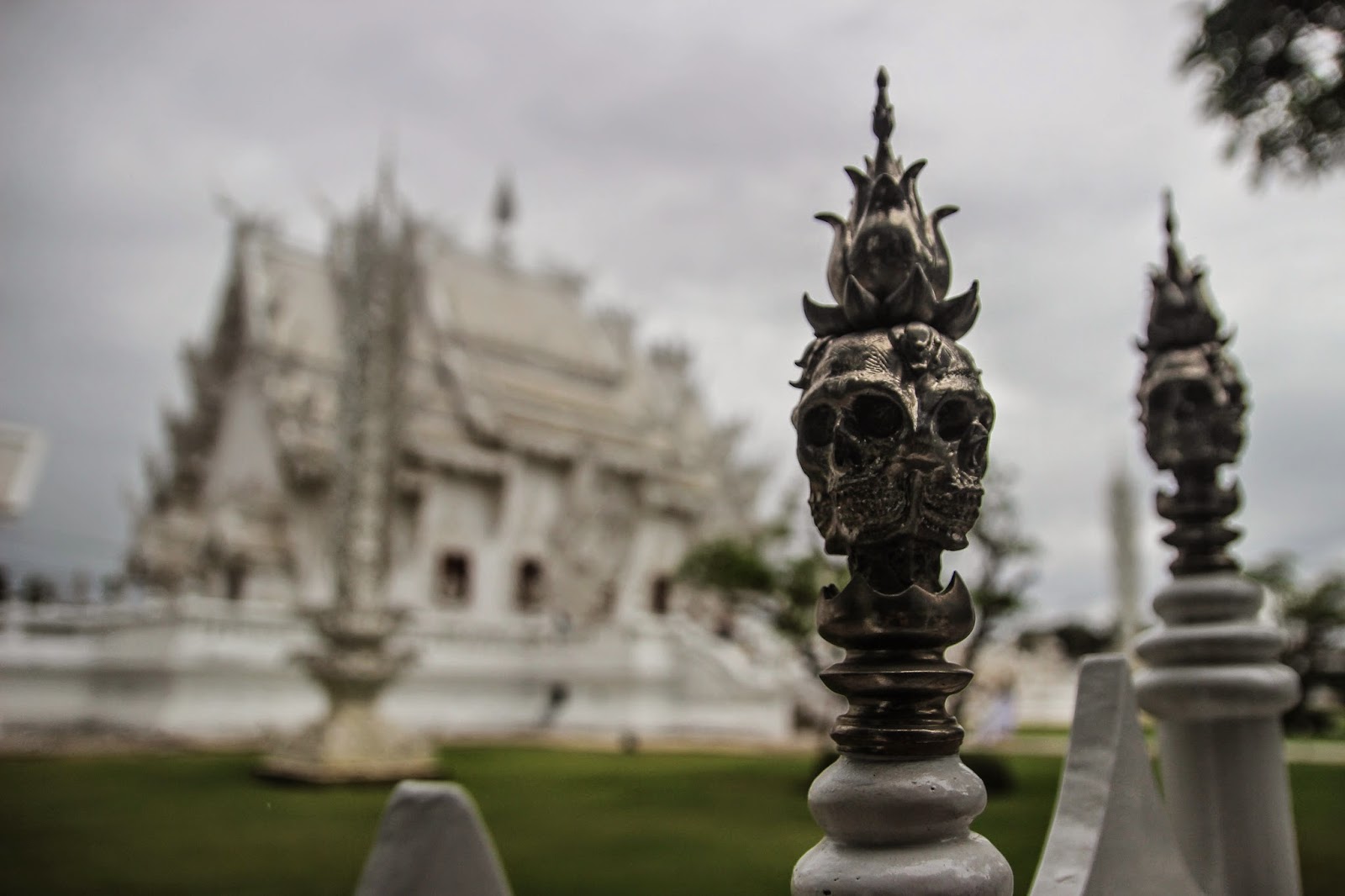 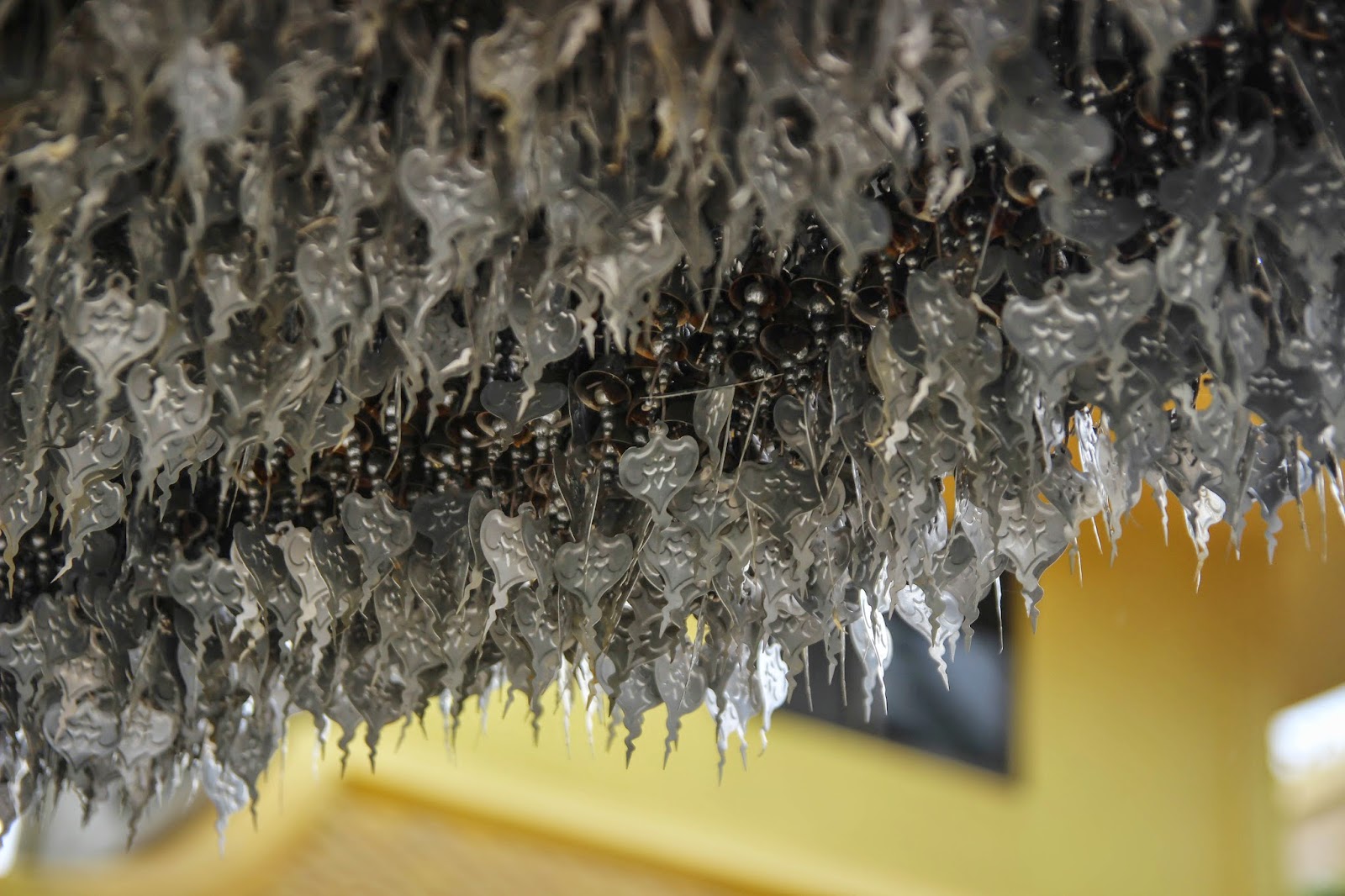 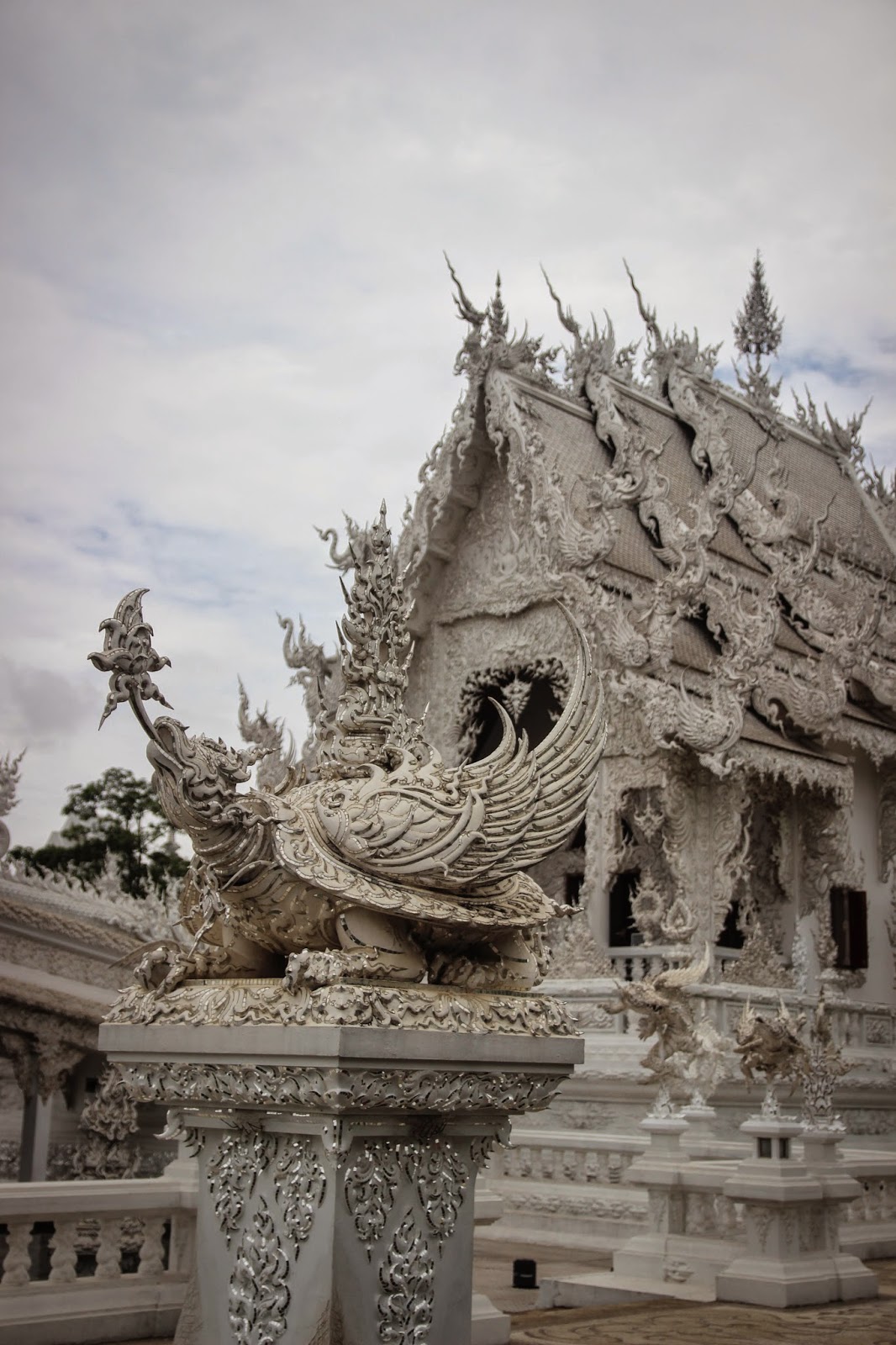 From the White Temple, I rode back past town to a spot called Chivit Thamma Da Coffee House that I had seen featured in the Bangkok Airways in-flight magazine - it was a gorgeous little sanctuary, and I wound up staying for hours enjoying the calm atmosphere.  The house itself was full of eclectic furniture, with a large bar serving coffee, smoothies, and bakery items opposite a fireplace and a little sunroom.  Outside was a patio and garden, right on the water, surrounded by lush greenery and lanterns hanging from the trees above.  They had decadent brunch options, and I enjoyed a tasty eggs benedict and a cappuccino, chatting with one of the owners and meeting her very chubby shih tzus, all named after coffee drinks! 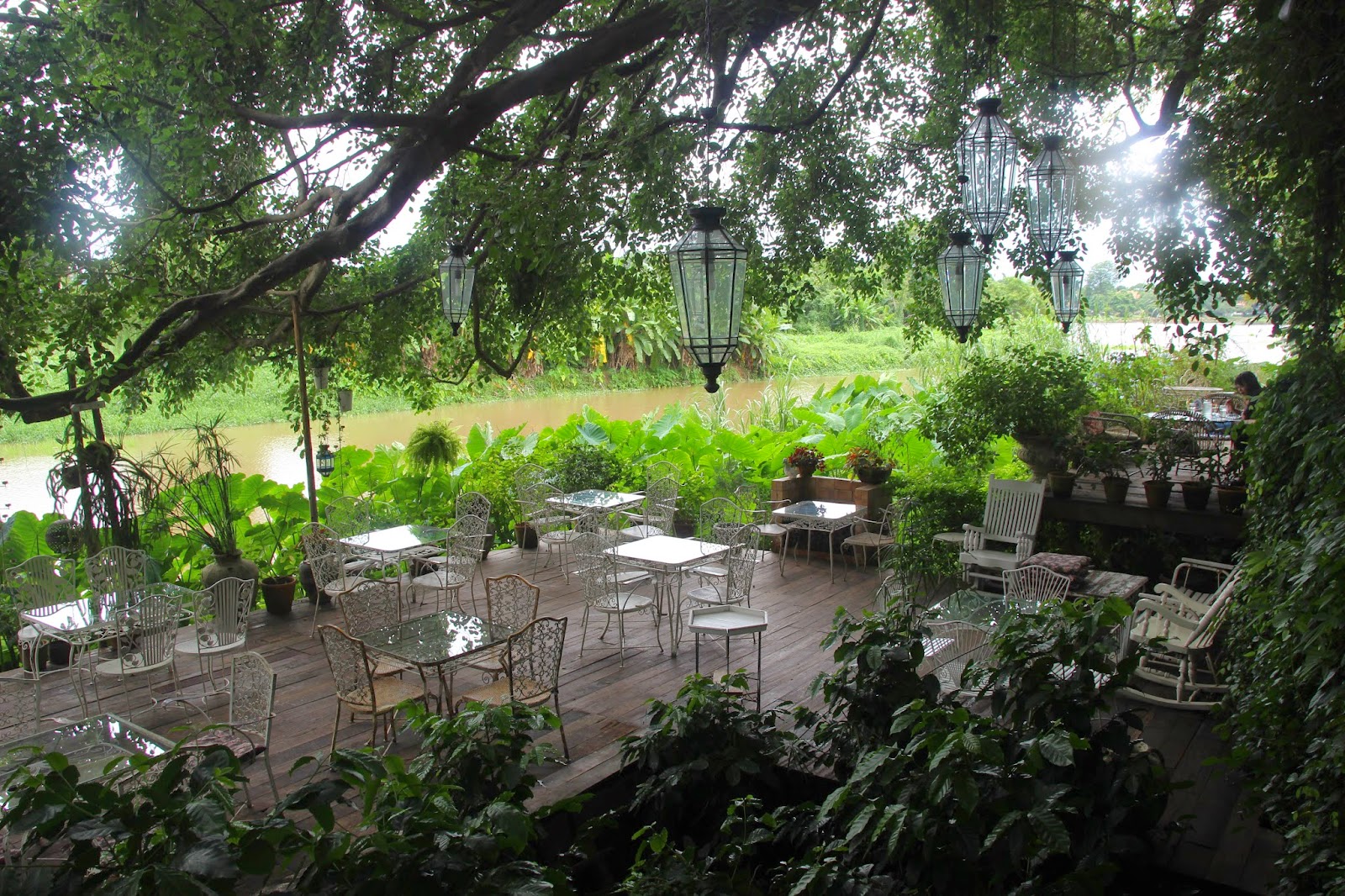 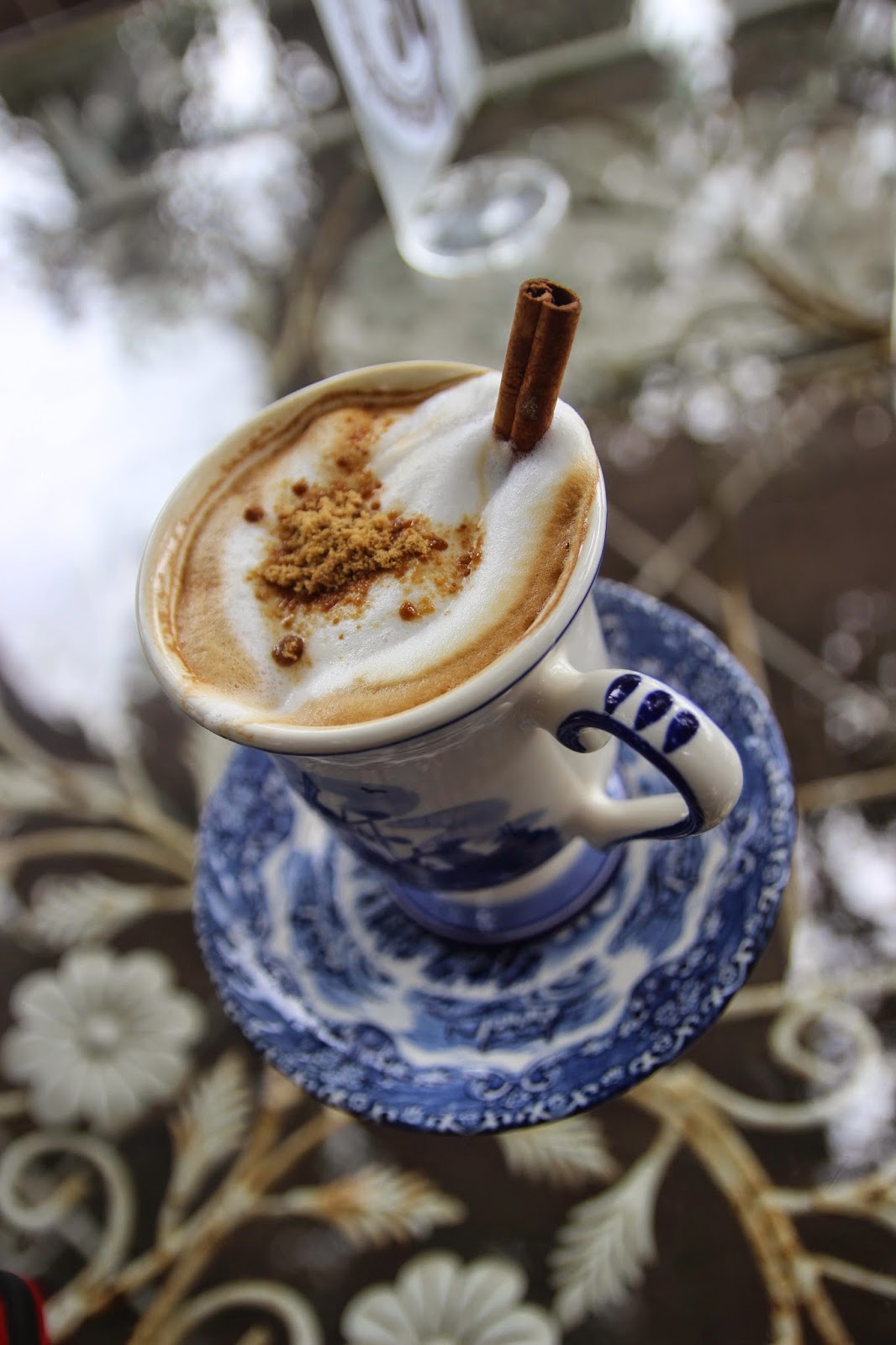 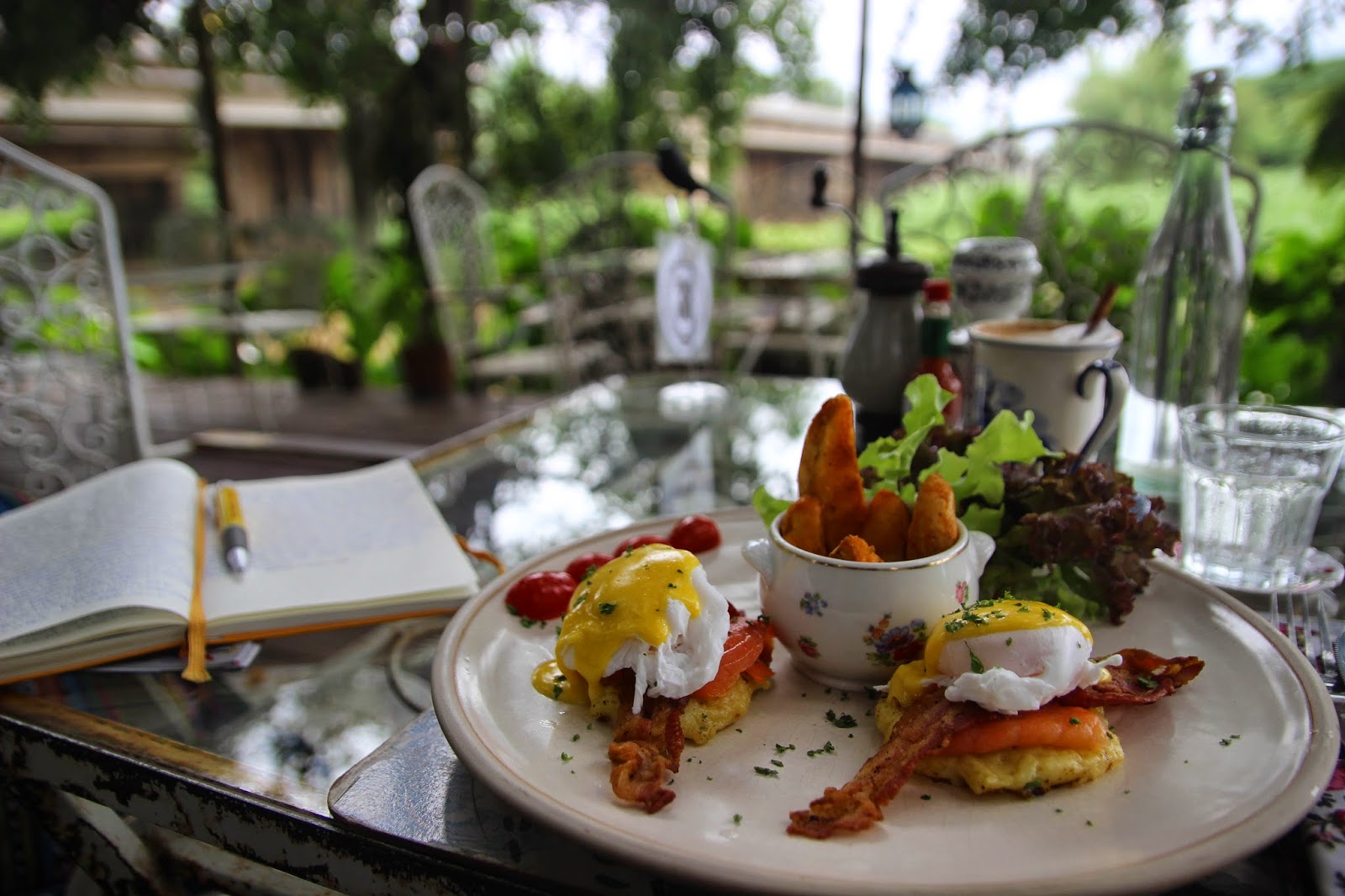 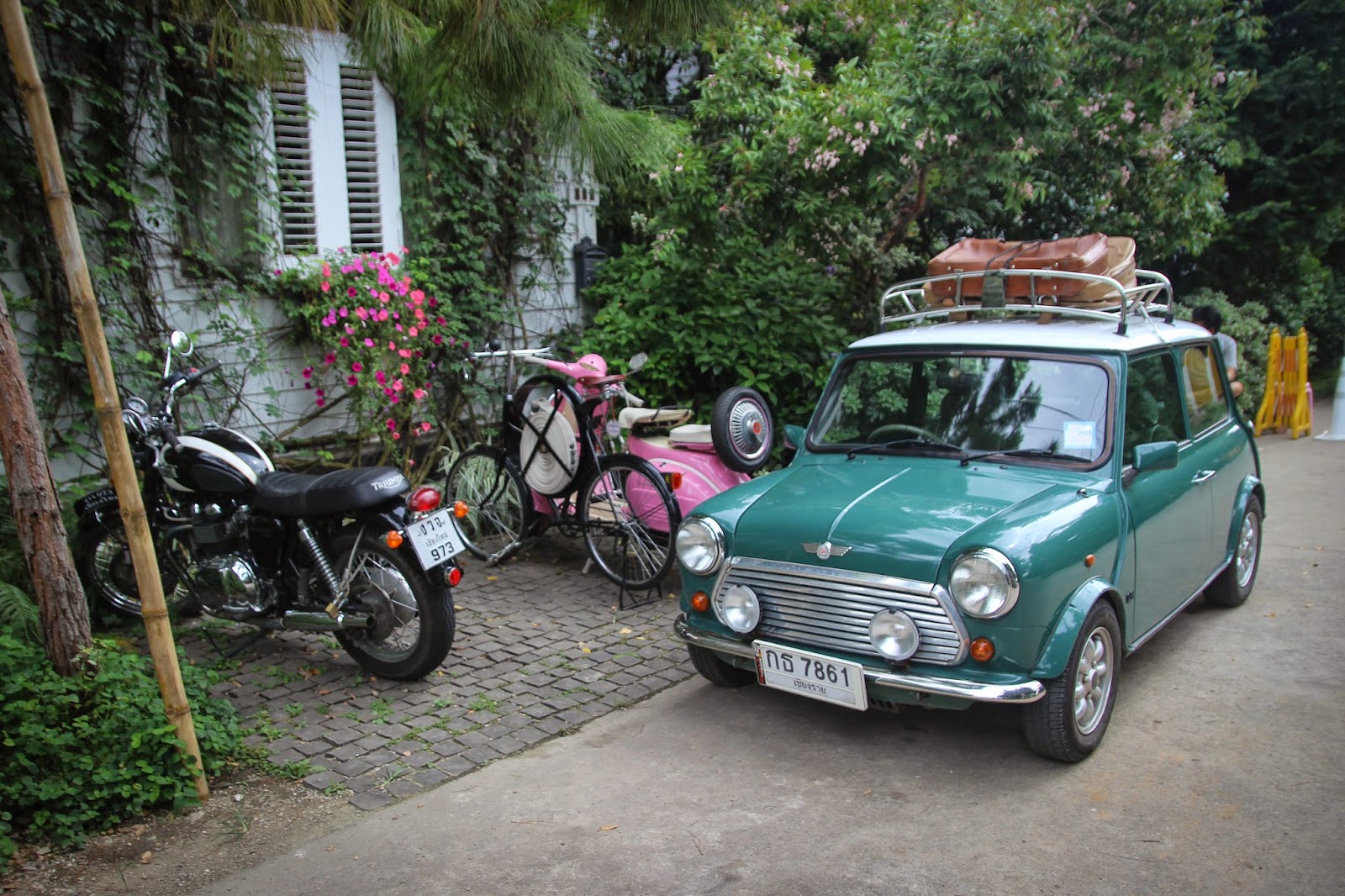 Later that evening I finished up my time in Thailand with, appropriately, one of the best foot massages of my entire visit to the country.  The next morning, a minivan swooped by my hostel, and I piled in alongside three other women who were to become fixtures of my next couple of months on the road.  We were taken to the Thai border, then loaded into a bus for the five minute ride to the Laos side.  Crossing the Laos border was more complex, requiring passport photos and paperwork and fees and multiple lines, but there weren't many of us, and we made it through.  We loaded onto the back of a truck, taken to a spot where we were given our tickets for the boat and given the opportunity to buy sandwiches, and then we were finally taken to the boat itself.

I had heard so many stories (good and bad) about the boat trip, that I had very mixed expectations, but I was relieved at what we wound up with.  Sheila, a Canadian woman who was taking a break from her job to volunteer in Cambodia and travel for a few months in Southeast Asia, and I grabbed a padded seat on a wooden bench with a small table in front of us.  Kate and Lydia, the two English friends we had shared the minivan with, took seats nearby which looked like they had been taken out of a bus and merely set inside the boat.

Thankfully we had a cool breeze most of the day, especially when it started pouring rain for a large portion of the afternoon.  We passed tall, rolling hills, covered in greenery, sandy embankments with water buffalo lazily meandering along, and rock jutting out from the water. We made random stops here and there to let off locals, just as the buses do when pulling over to the side of the road to let off passengers.  Once the rain cleared up, were treated to a gorgeous rainbow, arching over the river ahead of us. 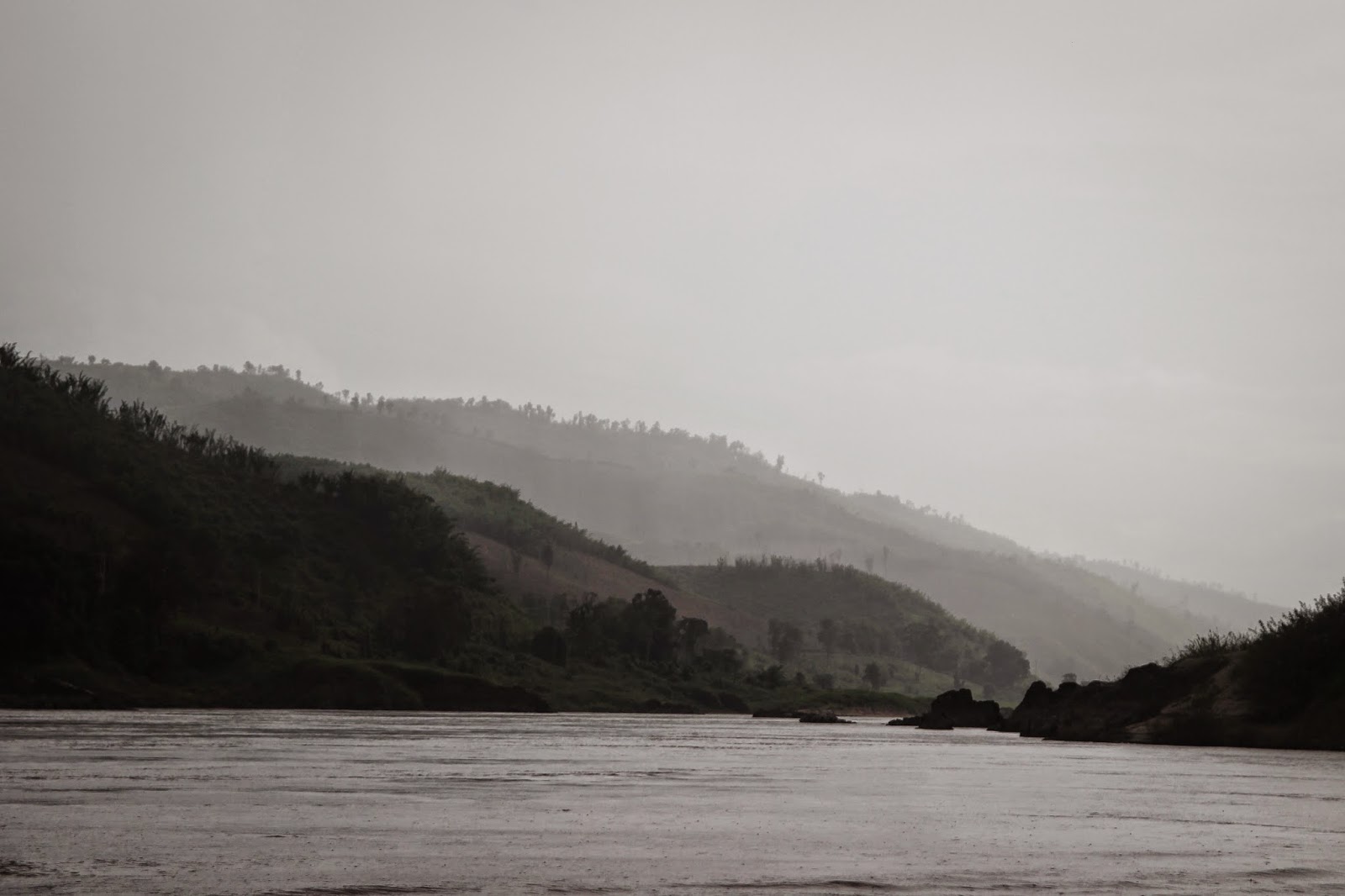 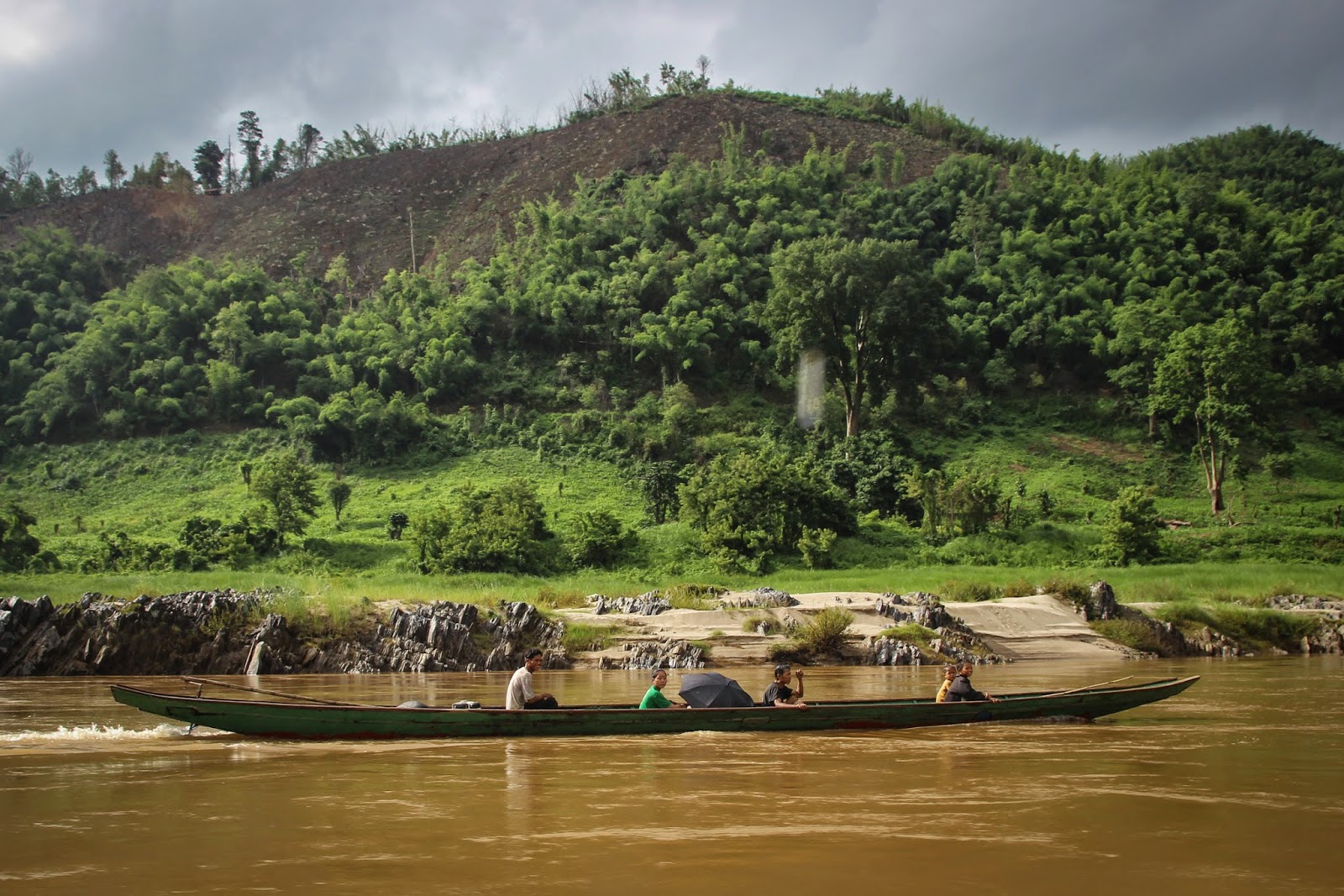 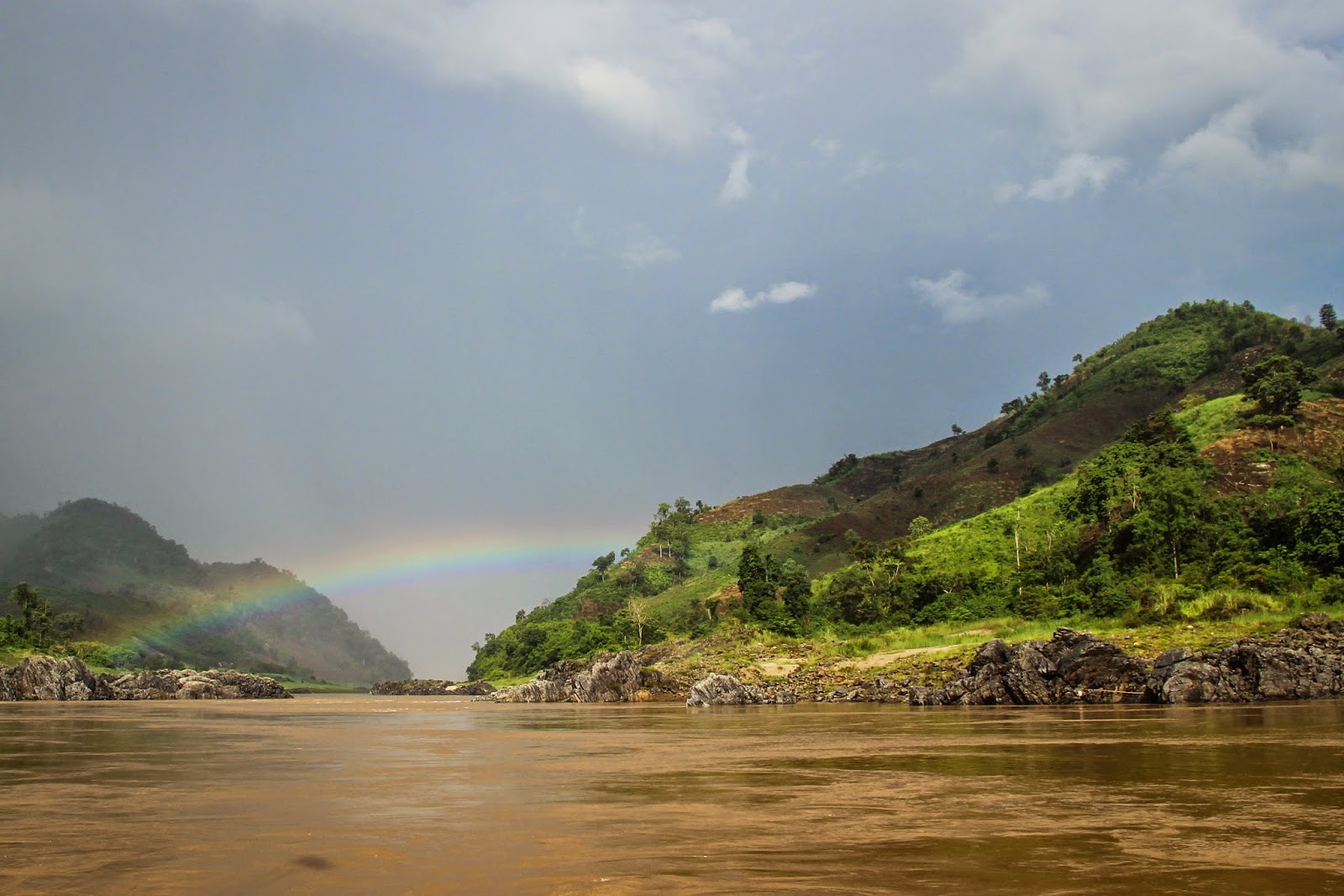 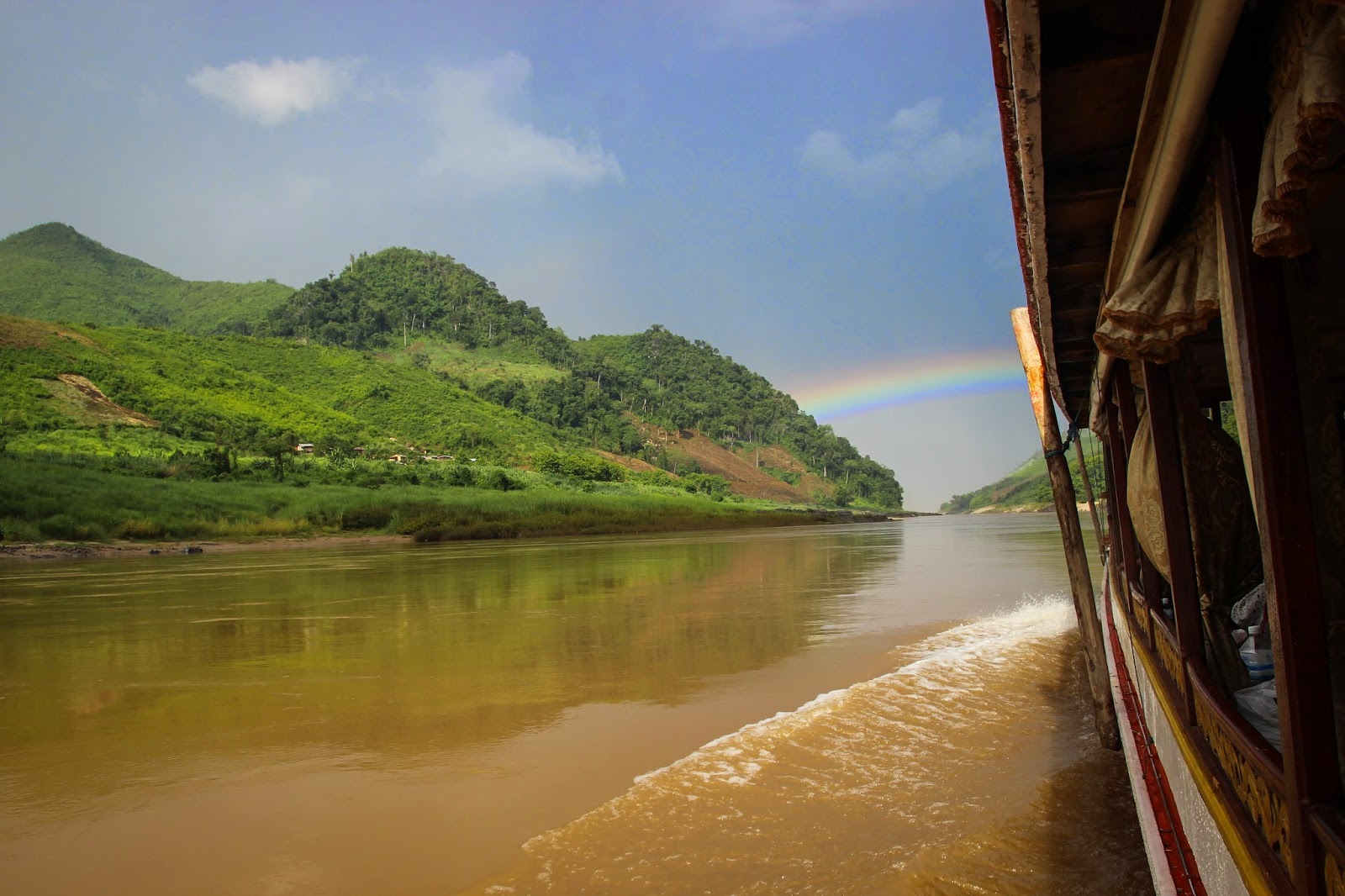 A couple of hours later, we arrived at our stop for the night, climbing out of the bus onto a makeshift dock of plastic jugs, working our way up the concrete stairs, as locals selling guesthouse rooms clamored for our attention.  Sheila and I had booked in advance back when we departed and quickly learned that we would have saved money if we would have waited!  But our little room wasn't bad, located very close to the river, with a large patio overlooking the water. We walked through the tiny town, enjoying Indian food for dinner as we escaped another massive downpour, and sampling local baked goods before getting some rest. 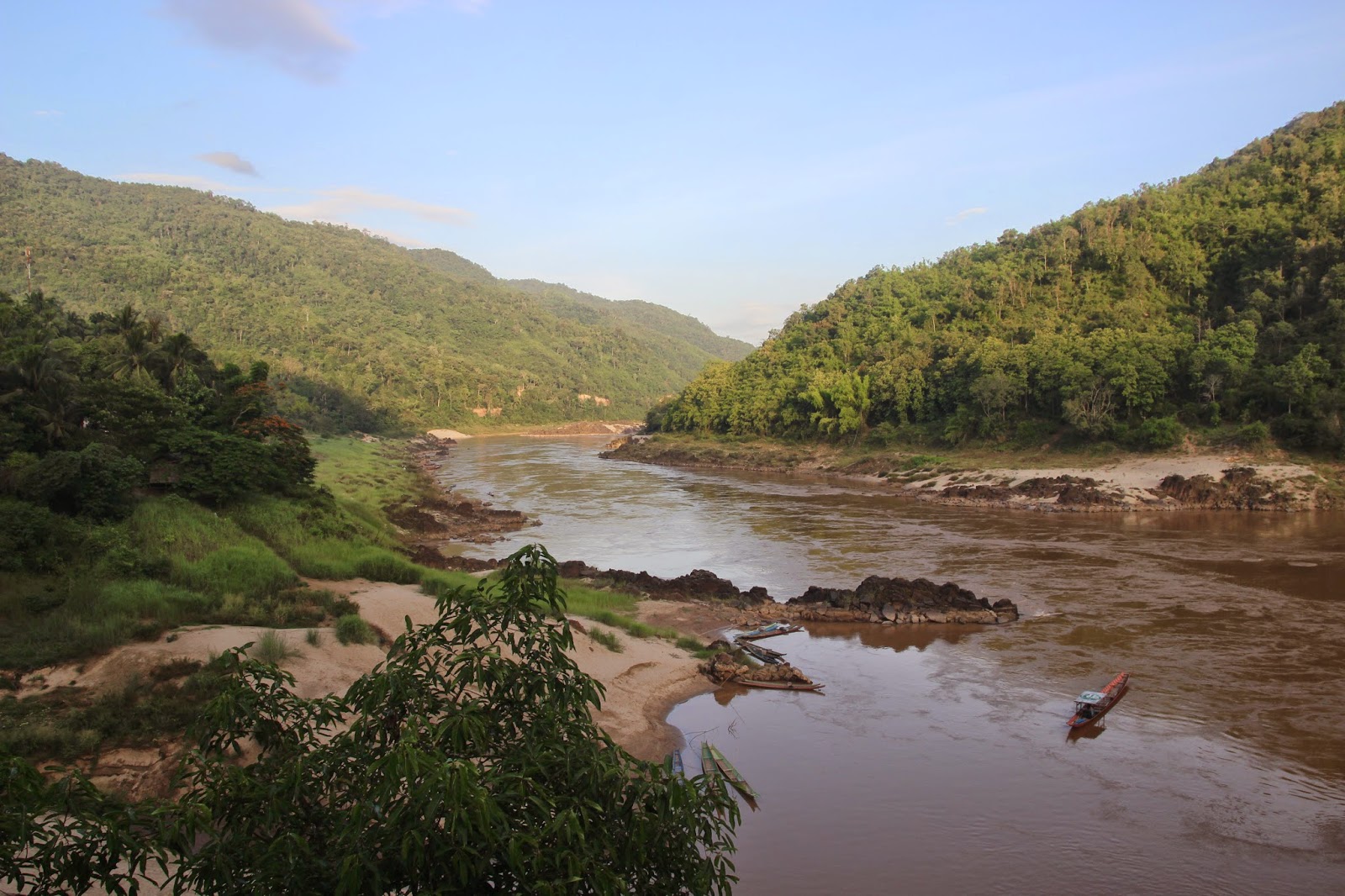 The following day, we actually had a different boat for the rest of the journey - this one was much more narrow, without the option of those convenient tables, and given the nature of the seats, felt like being on a very long, open air, wooden bus.  As we left, a number of local kids played in the river nearby, many of them stripping down and bathing stark naked right in front of us with absolutely no qualms.

The ride on our second day was hotter and more humid, but the scenery was gorgeous, as we passed huge cliffs rising out of the water that reminded me a bit of Railey Beach in Thailand.  We also passed a small shrine built directly into the side of another cliff, just before arriving at our destination.  There was much confusion when we pulled over, as it was far away from the city and without even a real docking point, but we were eventually herded off the boat, up the steep hill, and into waiting tuk tuks who delivered us to Luang Prabang, about 10 kilometers away.  Our arrival in Luang Prabang would turn out to be just the start of a very interesting time in Laos, a place full of beauty, but where we didn't always feel welcome. 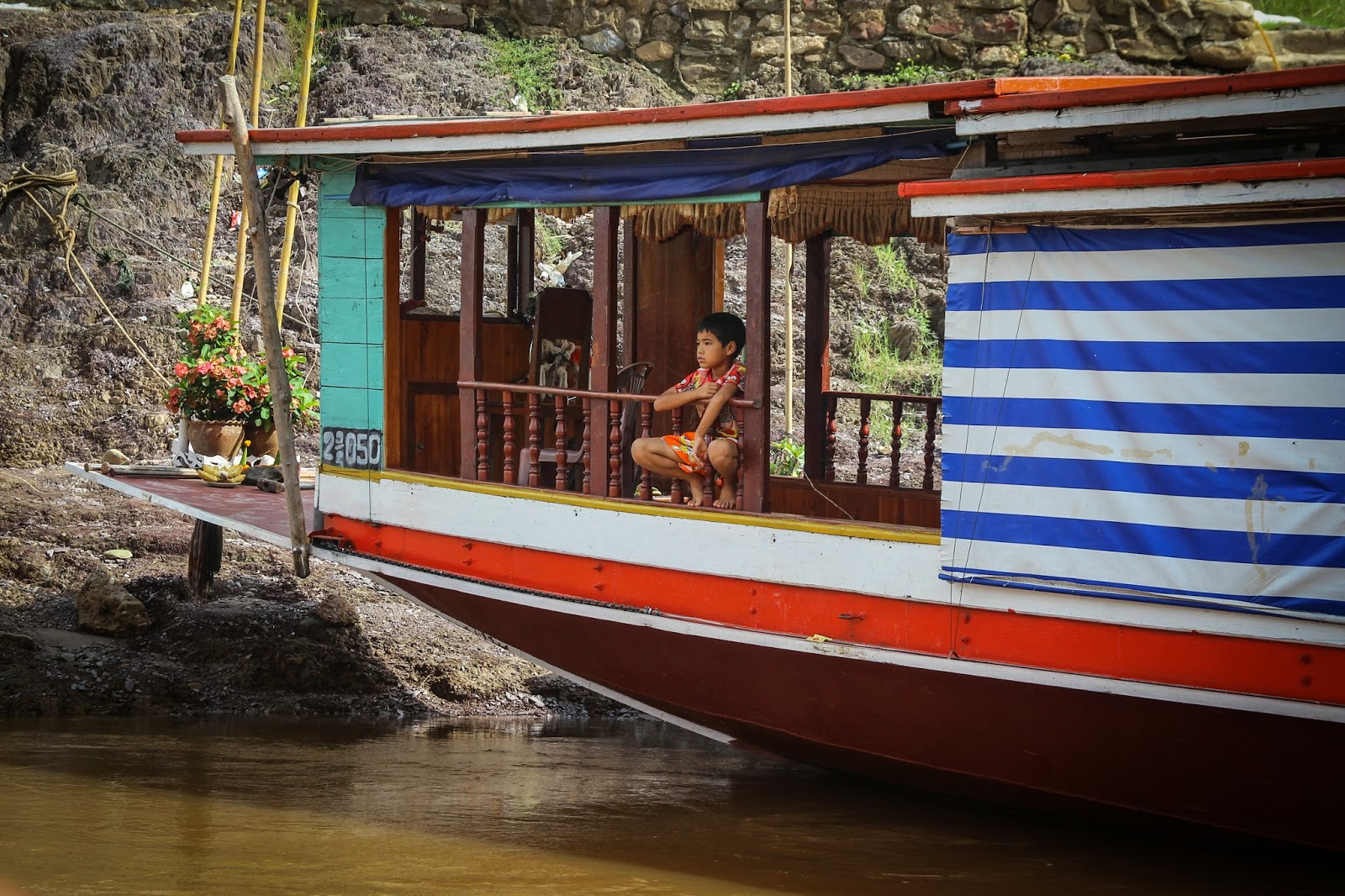 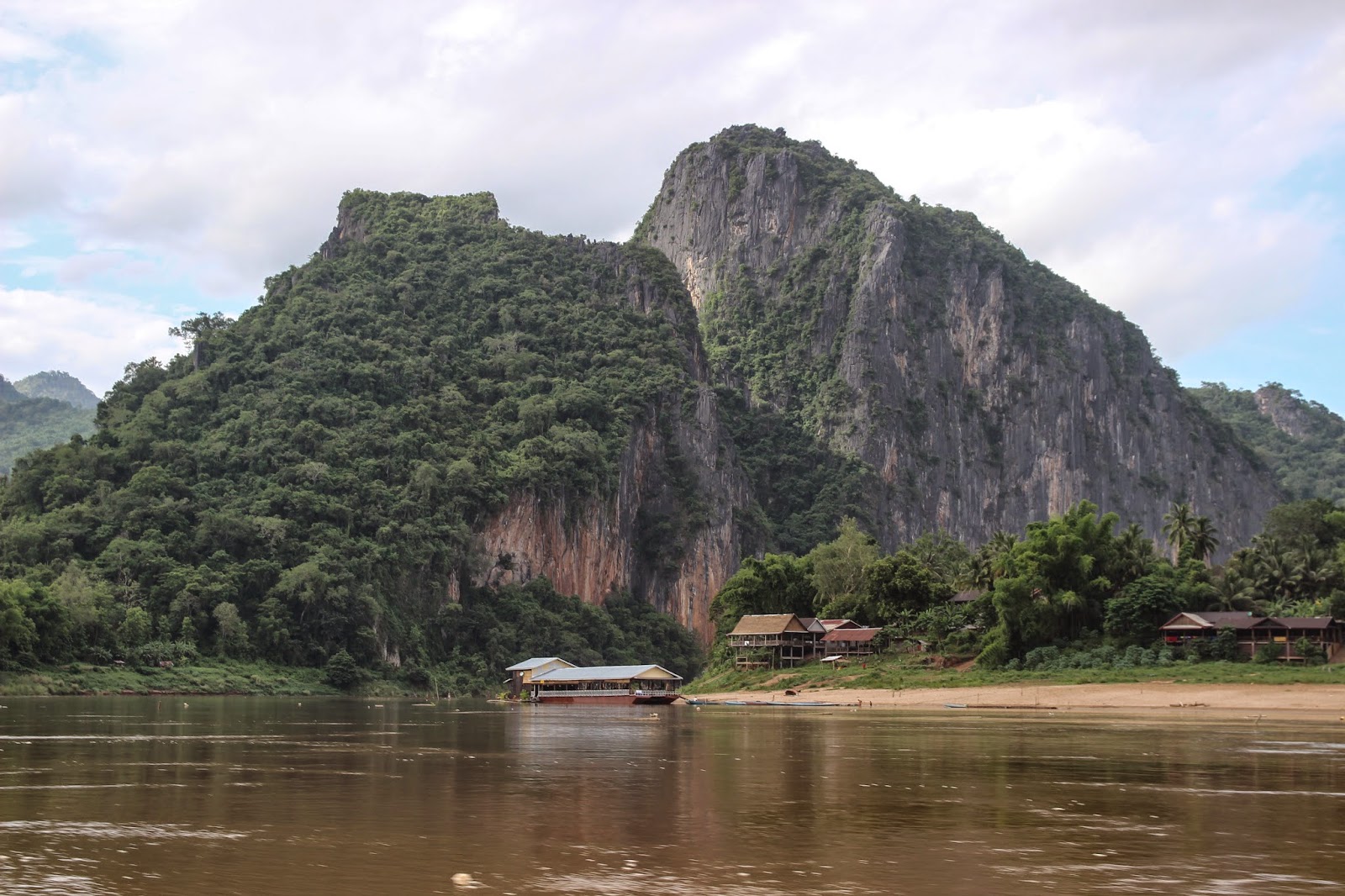 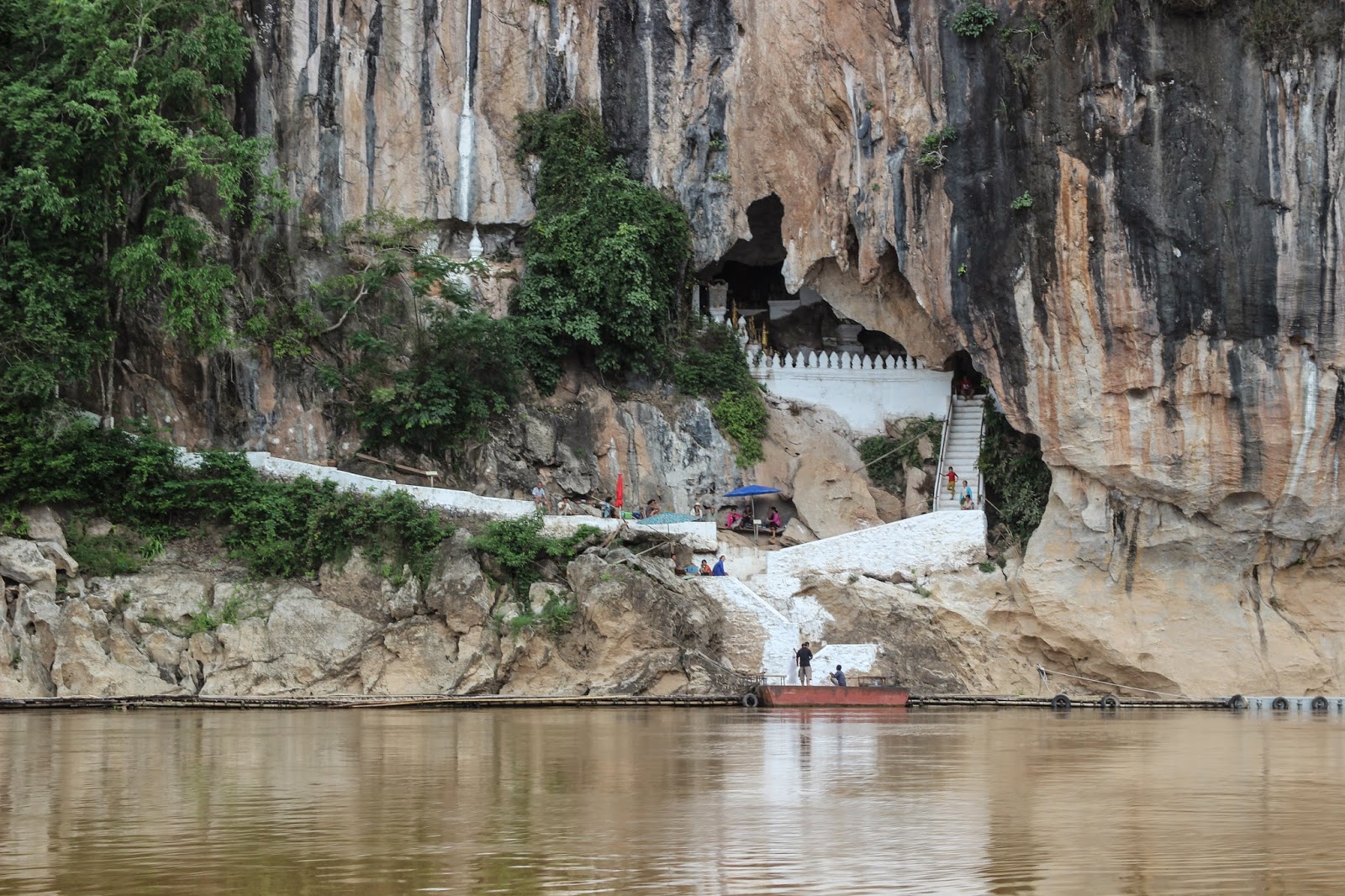 Posted by Outlander Abroad at 6:48 AM