Wrapping up Myanmar with Mandalay

After so many days of early mornings and endless explorations of Bagan, we found ourselves a bit exhausted and ready for some rest and recovery by the time we reached Mandalay.  We paid a bit more for a "nicer" hotel, right out of the Lonely Planet, called the Silver Star.  That first afternoon, I hardly even left the room - opting to watch a couple of English-language movies - until it was time for dinner.  Jimmy and I walked down to a little spot nearby called Mann - nothing special in terms of food, but we wound up having a long chat with a taxi driver who was enjoying a beer after finishing work.  He told us all about how he had just returned from spending a month as a monk, something he does every year.  I knew that it was typical for Burmese people to spend time in the monastery, but I had no idea that it could be such a regular / short-term commitment!

The next day we weren't too motivated to explore the city during the overwhelming heat of the day, so we wandered over near the train station to spend a few hours in what would become our little work haven, a spot called SP Bakery.  They had coffee, crispy fried chicken, working air conditioning, and as decent a speed of wifi as we could hope to find in Myanmar, a perfect place to get some work done! 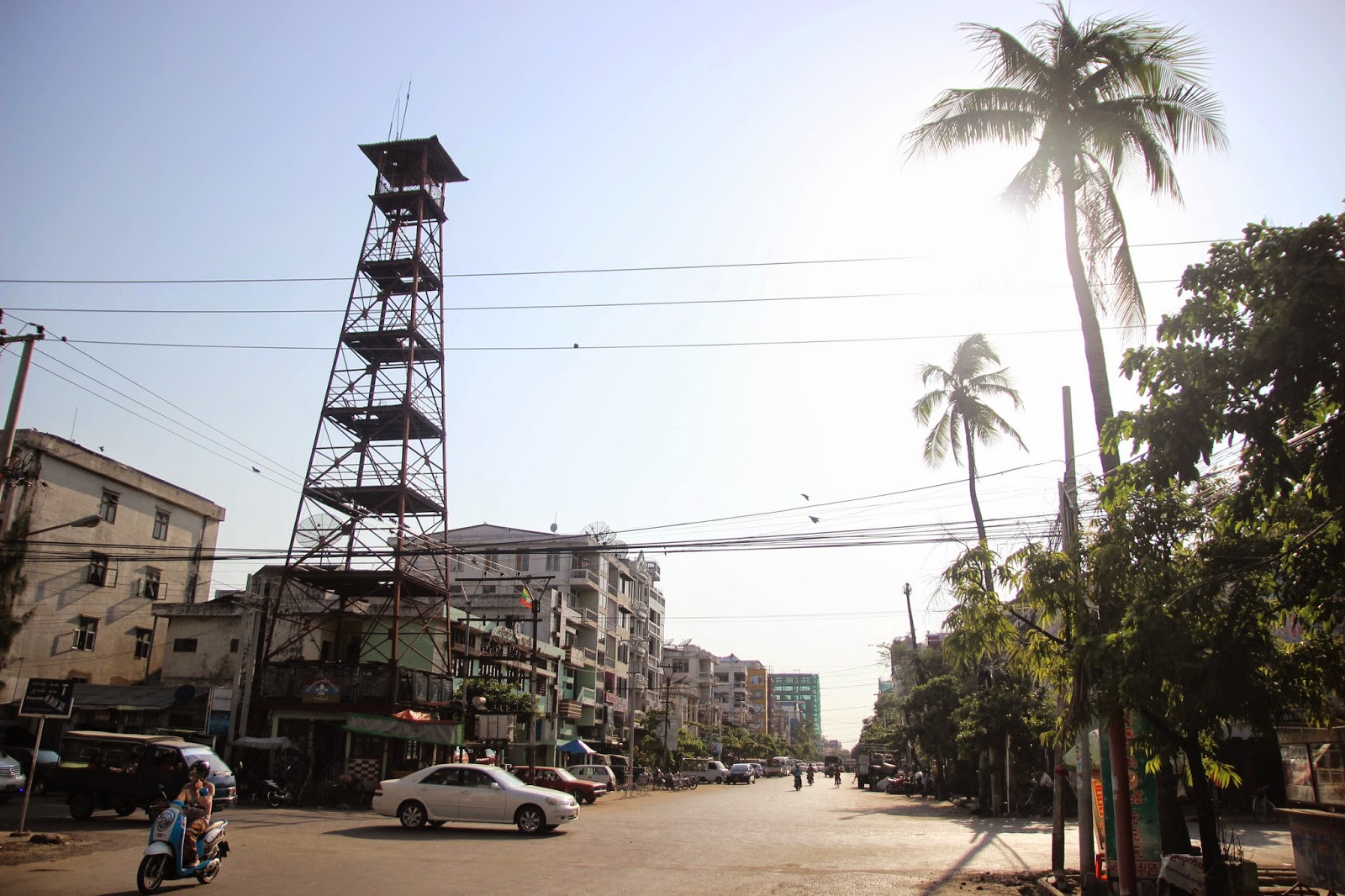 After getting in a few hours worth of work, we headed up to Mandalay Hill to visit the temple at the summit and catch a view of the sunset.  We lazily took a taxi to the very top, passing dozens of local pilgrims walking up the long switchback road.  After our drive, we turned in our shoes and took a dingy escalator to the pagoda overlooking the city below.  It has recently been renovated - now covered in dazzlingly bright colors, shiny mirrors, and gleaming gold leaf.  As I slowly walked around the stupa, I encountered a pair of monks, one of whom was eager to practice his English.  He smiled widely and giggled as he asked me various questions, ending with a request for me to pose with him for a photo.  I later spotted him chatting with some of the other foreigners - it was such an endearing sight.  With hardly any interesting clouds in the sky, we didn't see a particularly interesting or unique sunset, but the scene overlooking the city, especially the sprawling palace grounds, were still a beautiful sight to take in. 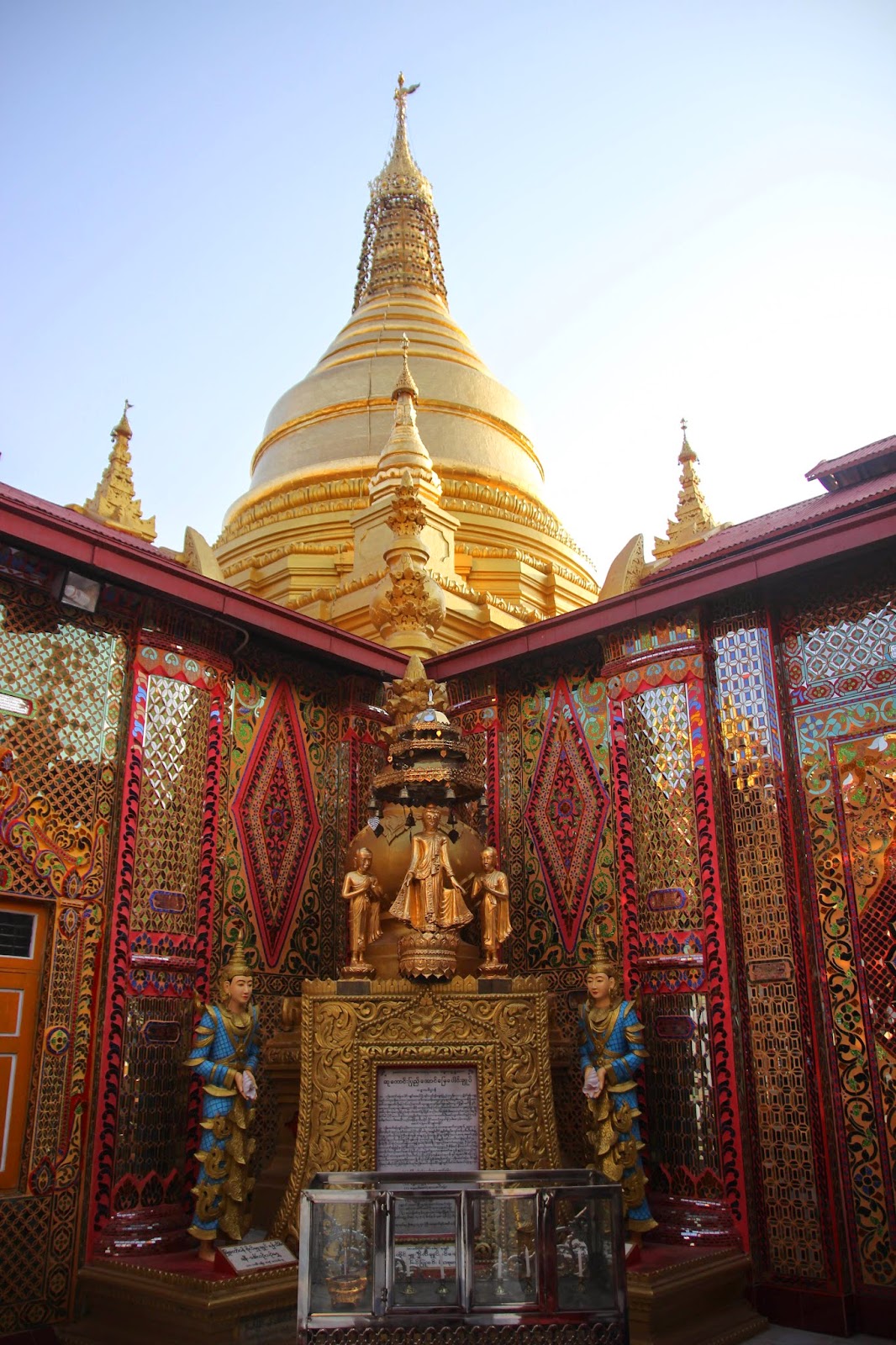 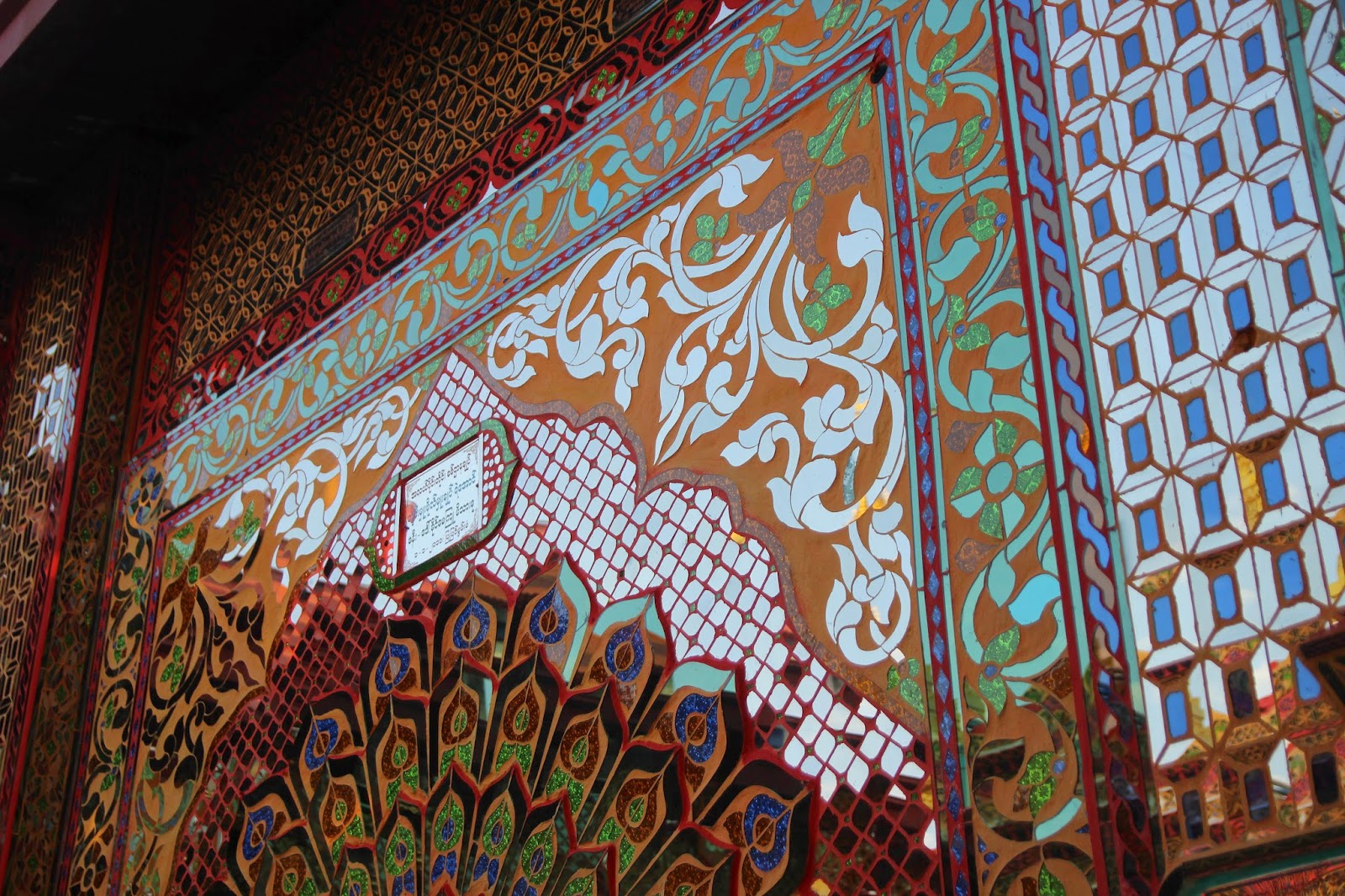 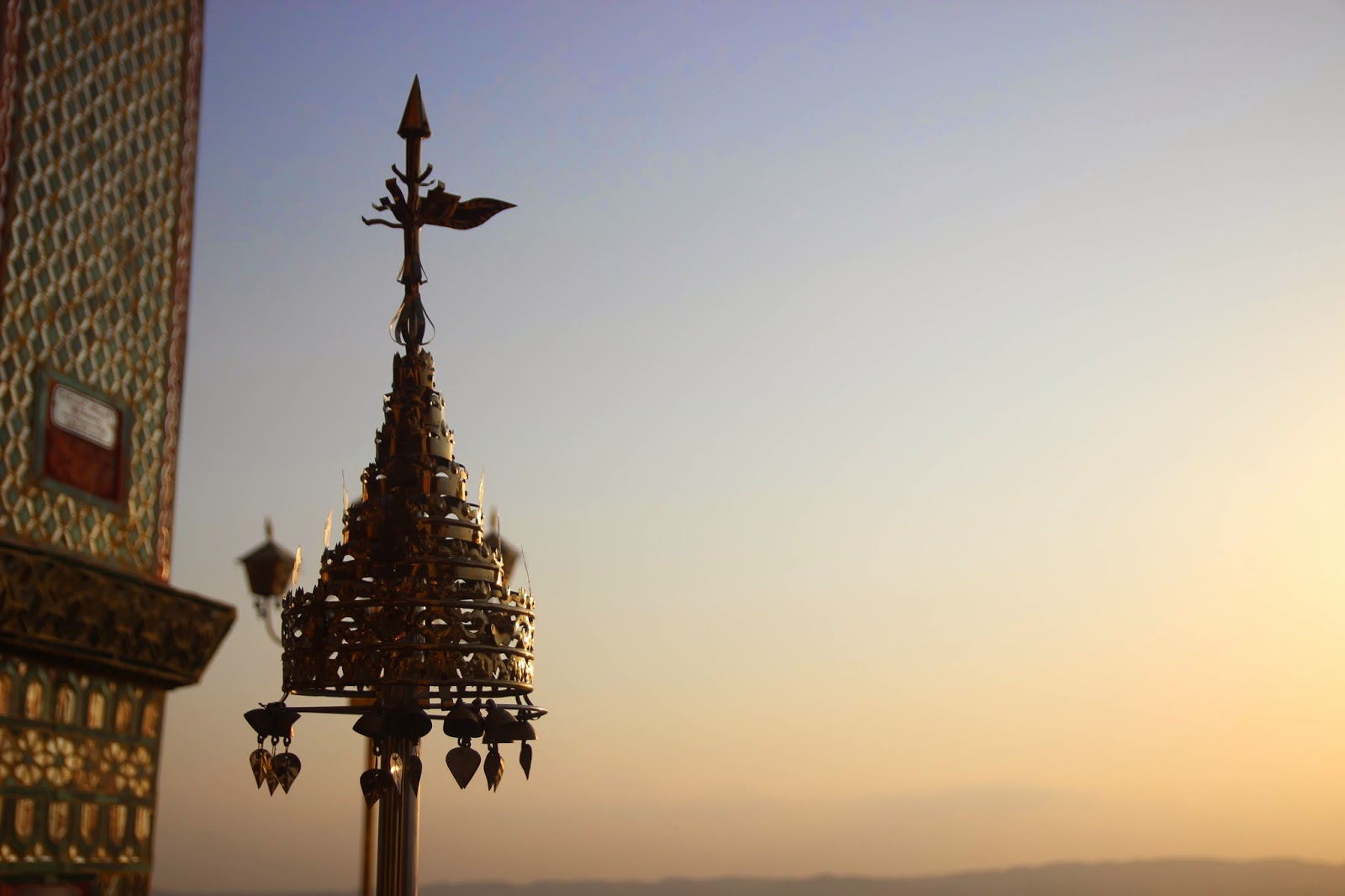 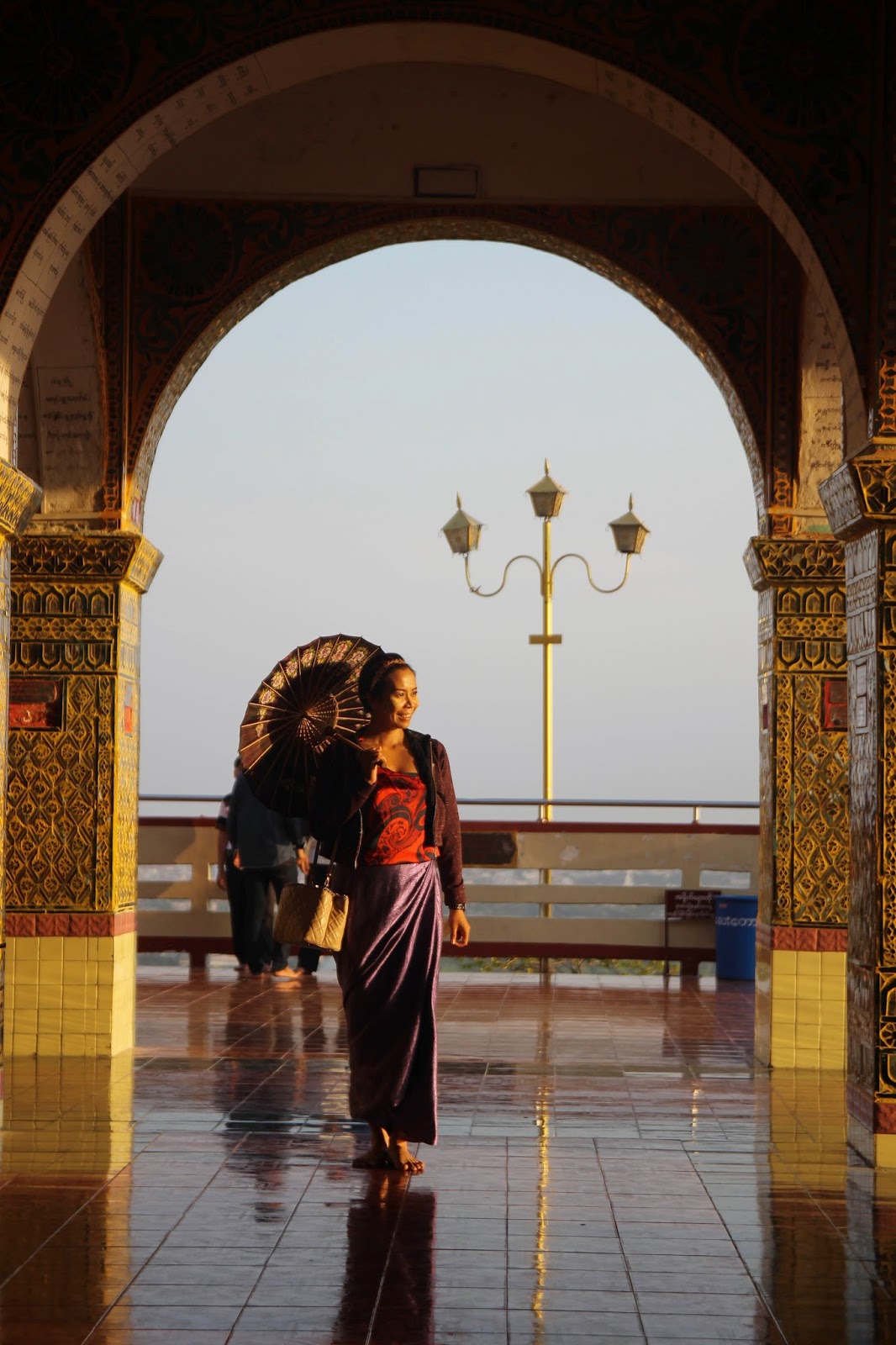 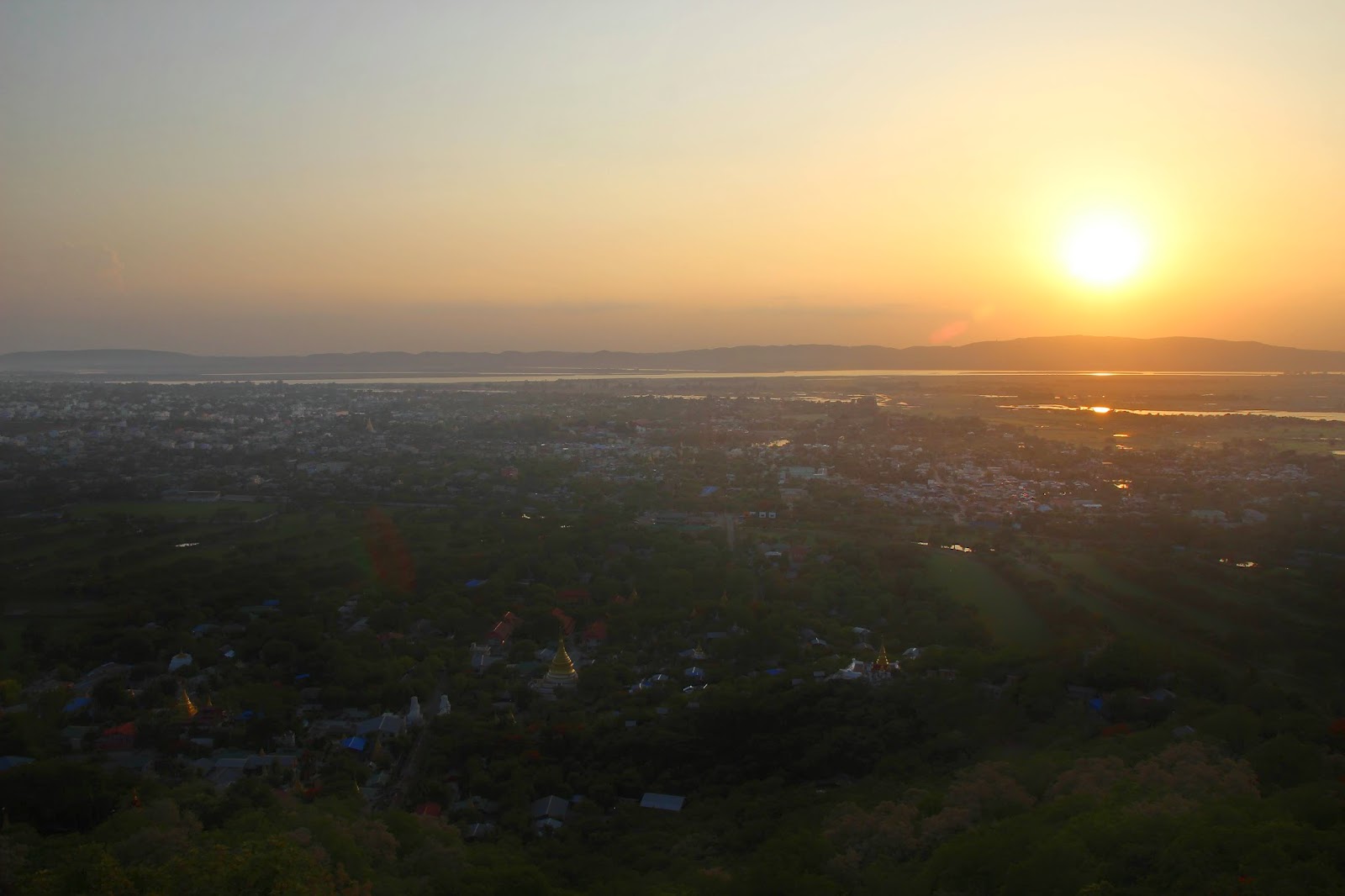 Once we returned from Mandalay Hill, we checked out a streetside spot for dinner we had spotted the night before, at the corner of 26th and 83rd streets.  I had a "mutton pancake" - basically a meat pie, consisting of minced mutton and onions in between layers of fried, flakey pastry.  It was absolutely delicious, and one of my favorite street food meals of the trip! 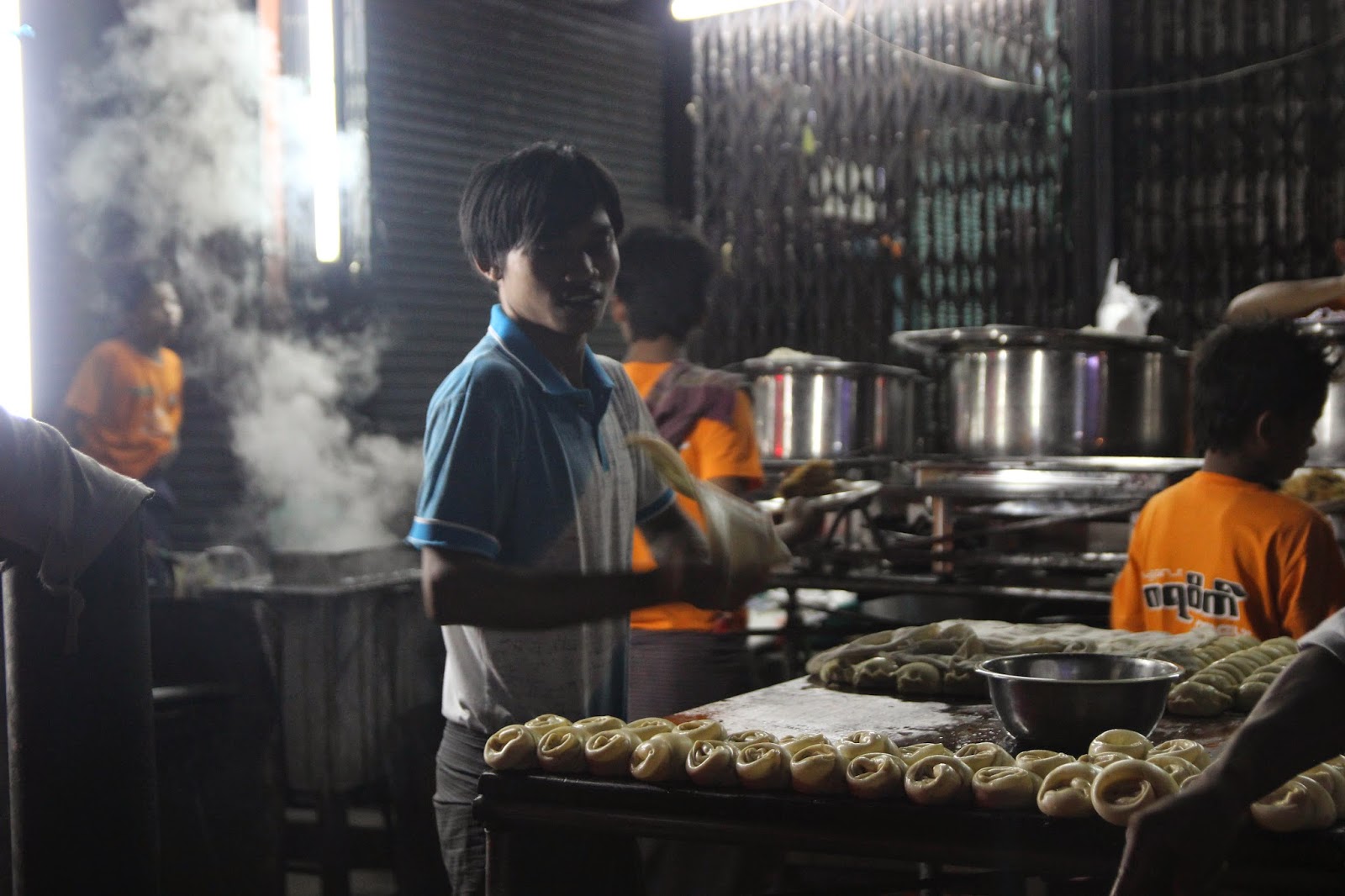 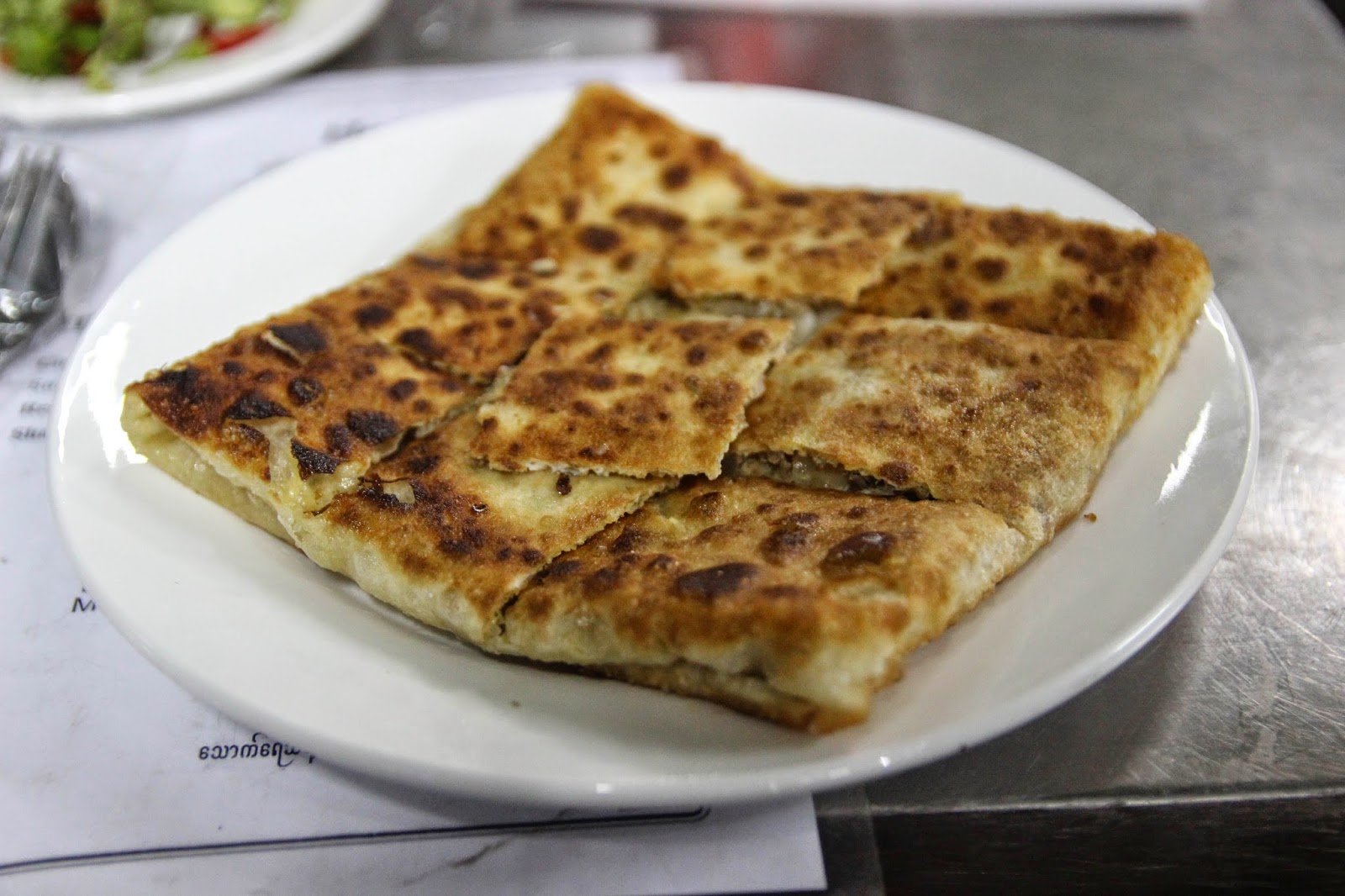 On our last full day in Myanmar, we again visited SP Bakery in the morning to get some work done, and once it started cooling off (well… in theory) in the late afternoon, we hired a couple of mototaxis up to the Kuthodaw Pagoda, a shimmering gold structure surrounded by small white stupas, each of which had a stone slab representing a single page of the "world's largest book", with engraved script covering each piece.  As we wandered around the pagoda, we bumped into a monk who took it upon himself to show us around the temple grounds, pointing out the 100 year old starflower tree and the individual figures surrounding the pagoda which represented various days of the week. (These correspond to the day of the week an individual is born on, so typically people will leave offerings or say prayers at their specific figure.) 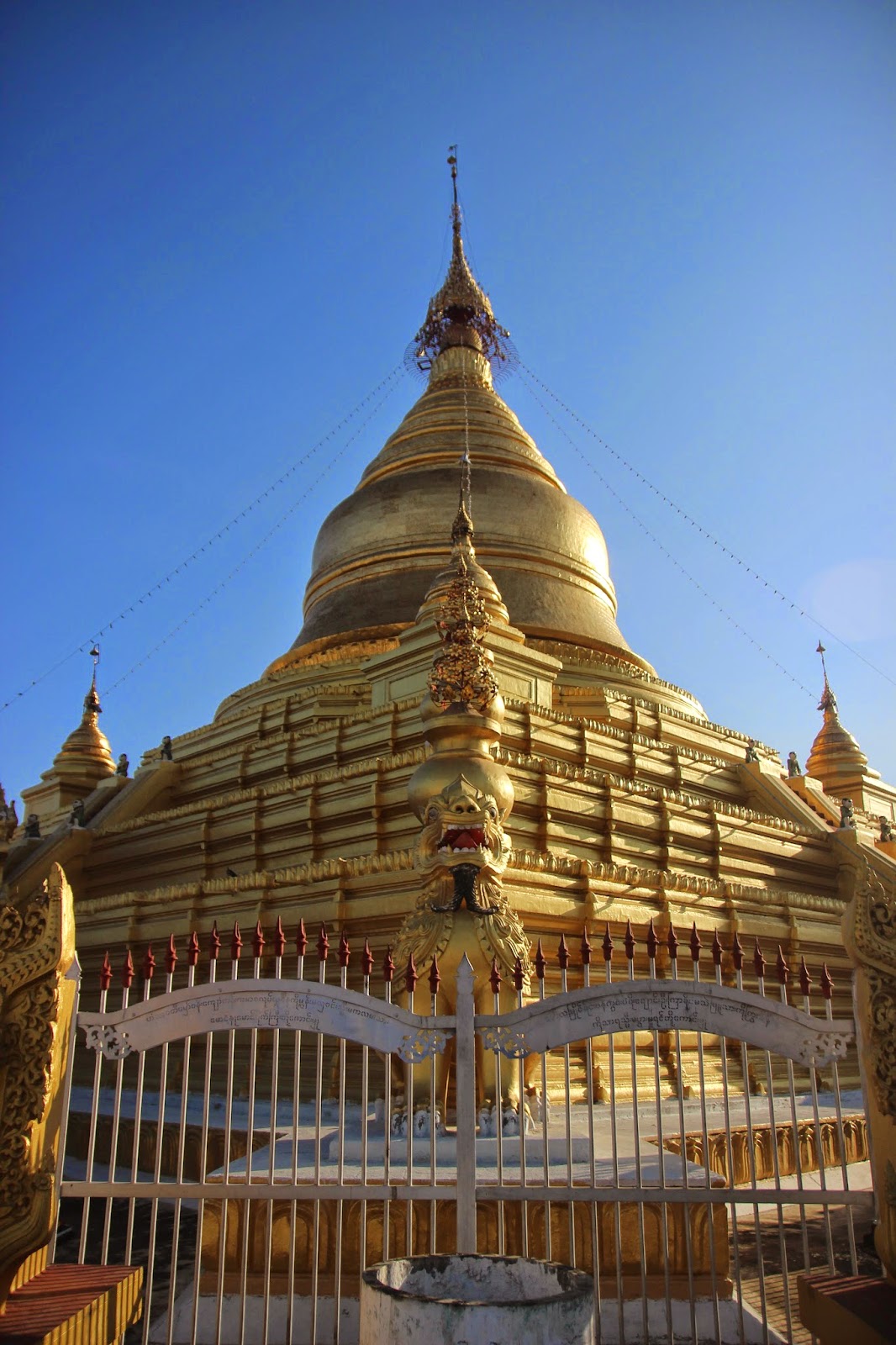 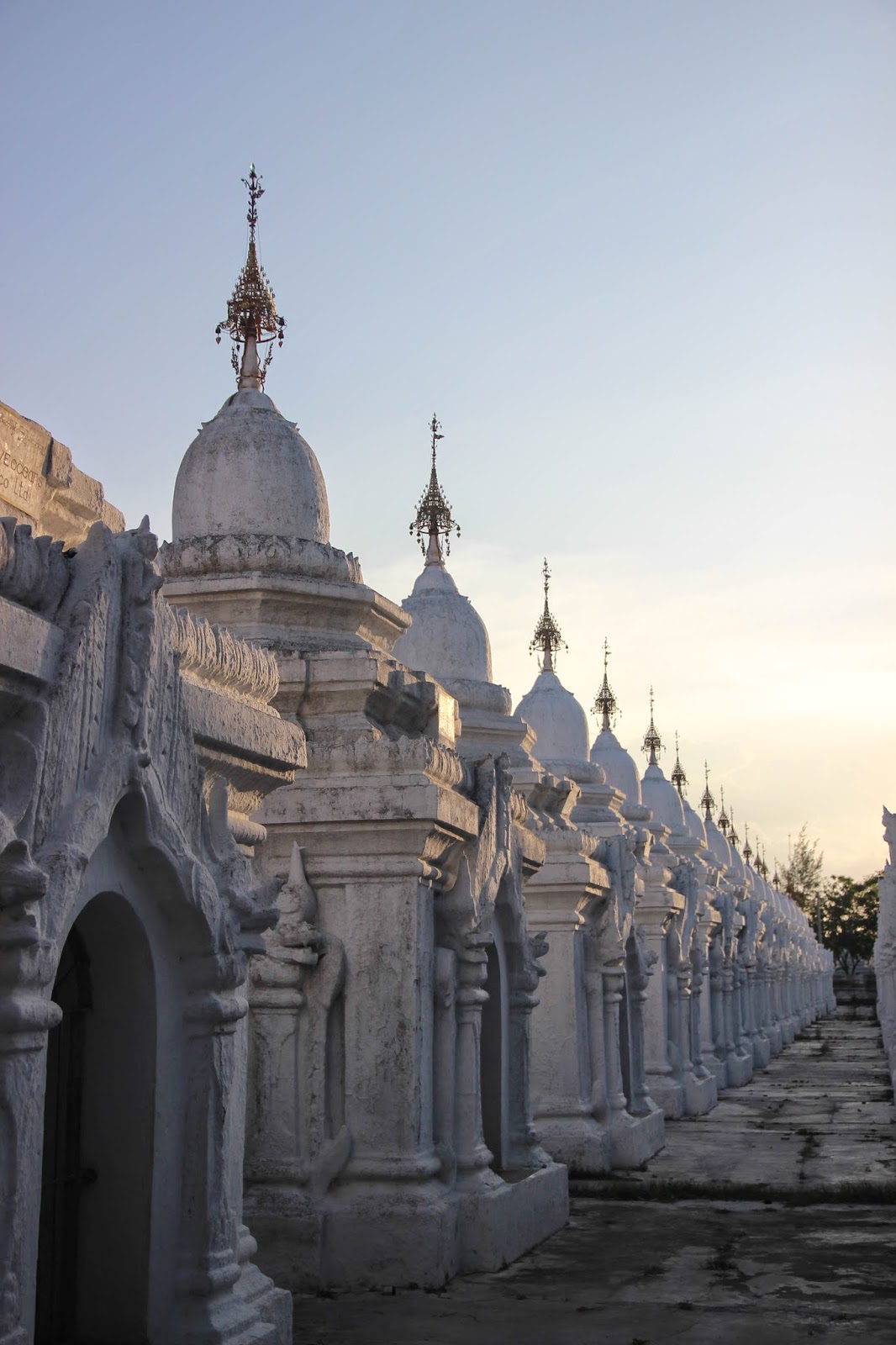 We didn't think much of his insistence at guiding us, as we had had such good experiences with monks at many of the temples we had visited before, so when he led us over to the Sandamuni Pagoda, where we had planned on going next anyway, we happily went along.  This pagoda was also covered in gold and surrounded by dozens of white stupas, which also contained "pages" of the same "book".  The sun began to set while we visited the temple, casting the sky in a gorgeous light, creating a beautiful silhouette of the spires of the individual stupas.


We didn't have much time left before needing to meet our mototaxi drivers, but we again followed our monk to the third temple in the area, the Kyauk Taw Gyi Phaya, just across the road.  Its primary feature was a giant marble image of the buddha, decorated with - what else - brightly colored LED lights, forming giant sashes across the body of the image and massive halos radiating out from the top.  We walked around to the opposite end to see a set of massive buddha footprints, also in marble, and encountering a family of temple kittens, absolutely tiny and fragile and adorable.  It was growing dark and we needed to leave, but our monk insisted on showing us a few more things outside and taking us through a small blessing before allowing us to leave.  It had been such a wonderful and unique experience, but before we could even begin to thank him, he floored us by requesting a payment of $100 USD…!!!! We actually asked if he had misstated and meant $10 USD, but no, $100 was what he was looking for, for a "new robe and English language books".  Taken completely aback, we offered him 10000 kyatt (the equivalent of $10 USD), which he eventually accepted, but sadly the beauty of the whole situation had been shattered.

We did find our way back to the mototaxis, quickly riding back to the hotel through the dark.  We almost immediately set out to find dinner, settling for another street stall we had noticed at 82nd and 27th.  We devoured plates of curry and excellent roti, finally turning in for the night with a movie at the hotel.  The following morning we awoke early, packing and visiting a nearby bakery for some chicken floss pastry and iced coffee before hopping in a taxi (with no air conditioning) for a long drive out to the middle of absolutely nowhere to catch our flight at the Mandalay Airport.  The airport itself was interesting to say the least… it was tiny, was hardly air conditioned, and there was a random guy smoking a cigarette in the middle of the major corridor which seemed to surprise and/or bother approximately no one.  But it wasn't long before we were boarding our flight, heading back to Thailand, with a big surprise awaiting us on the other end...
Posted by Outlander Abroad at 1:33 PM