A Road Trip in Kampot

When Stephanie mentioned that she and some coworkers were planning to get out of the city to visit nearby Kampot for the weekend, I eagerly jumped on board.  They arranged for a minivan to pick up everyone from the office, and I met up with Joe, the significant other of one of the coworkers, to catch the Kampot Express (a minivan / bus service) that would get us to town a bit earlier.  The ride wasn't too bad, though I did look up once to see us weaving in and out of traffic and lanes and motorbikes, so I kept my eyes down after that!  We were dropped off at the central roundabout of the town, featuring a giant statue of… a durian.  Thankfully it was not accompanied by the durian smell! 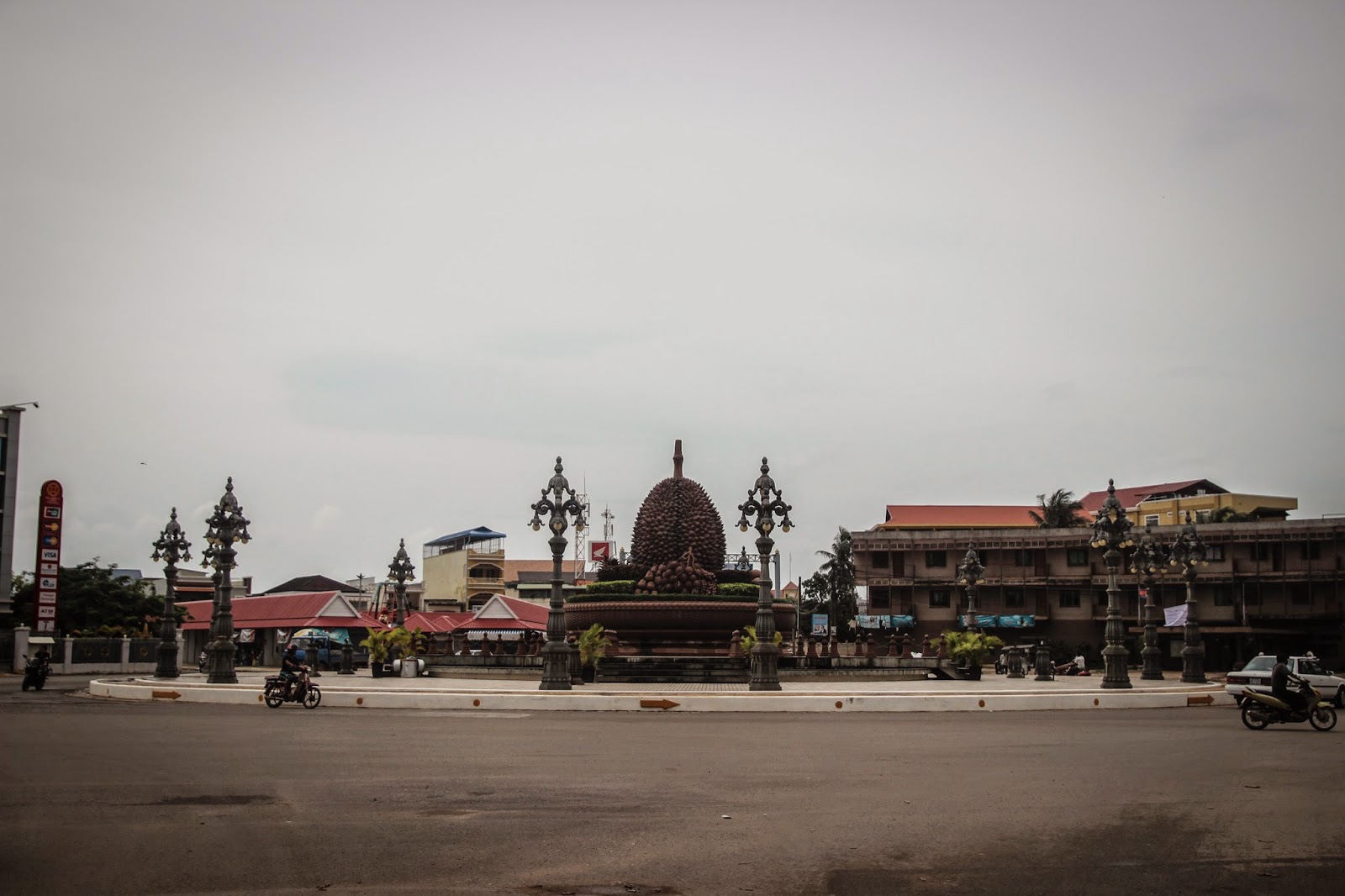 We wandered through town in search of wifi and a late lunch, finding a small restaurant on a corner that we ducked into just as it started to rain.  After a quick meal and connecting with our friends, we caught a tuk tuk out to the spot where we would be staying - Green House at Kampot River.  It was quite a way outside of town, including a winding 700m dirt road at the very end.  The common area of the place was gorgeous - an open air cafe / bar with a multi-level porch overlooking the river, leading out to a small dock with a couple of chairs below.  Unfortunately our room, while very nice, contained only two bunk beds… with double mattresses.  So we would all be doubling up to squeeze eight people into the room!  We sat on the porch enjoying beers and pepper cookies (chocolate chip cookies with peppercorn… spicy and delicious) until the rest of the group arrived just after sunset.  We sat outside enjoying the fresh air, having dinner and drinks and chatting, until we all turned in for some sleep in our respective bunks.

I was awoken by Thomas, one of Stephanie's French coworkers, arousing everyone who was able to drive a motorbike around 7:30am.  I slowly got up and had some breakfast, not altogether sold on the idea of spending an entire day driving around on motorbikes when we had a gorgeous river to relax next to.  But I joined the group, piling onto one of three motos we would rent from the guest house to drive into town and rent four more for our big group.  Back at Green House we loaded up, Stephanie climbing onto the back of my bike, and we set off.  The drive was fairly straightforward and took about an hour, with bright blue skies and the wind at our faces, it was a pretty enjoyable ride.  We arrived into the nearby town of Kep, parking our bikes next to a bustling seaside market where vendors were selling cheap shell-covered souvenirs, fried dough and bananas, coconuts, and tons of fresh seafood.  We saw whole fish, shrimps, tiny squids on skewers being barbecued, and of course, crabs.  Dozens of crab traps floated in the sea, occasionally pulled in by women to present for sale. 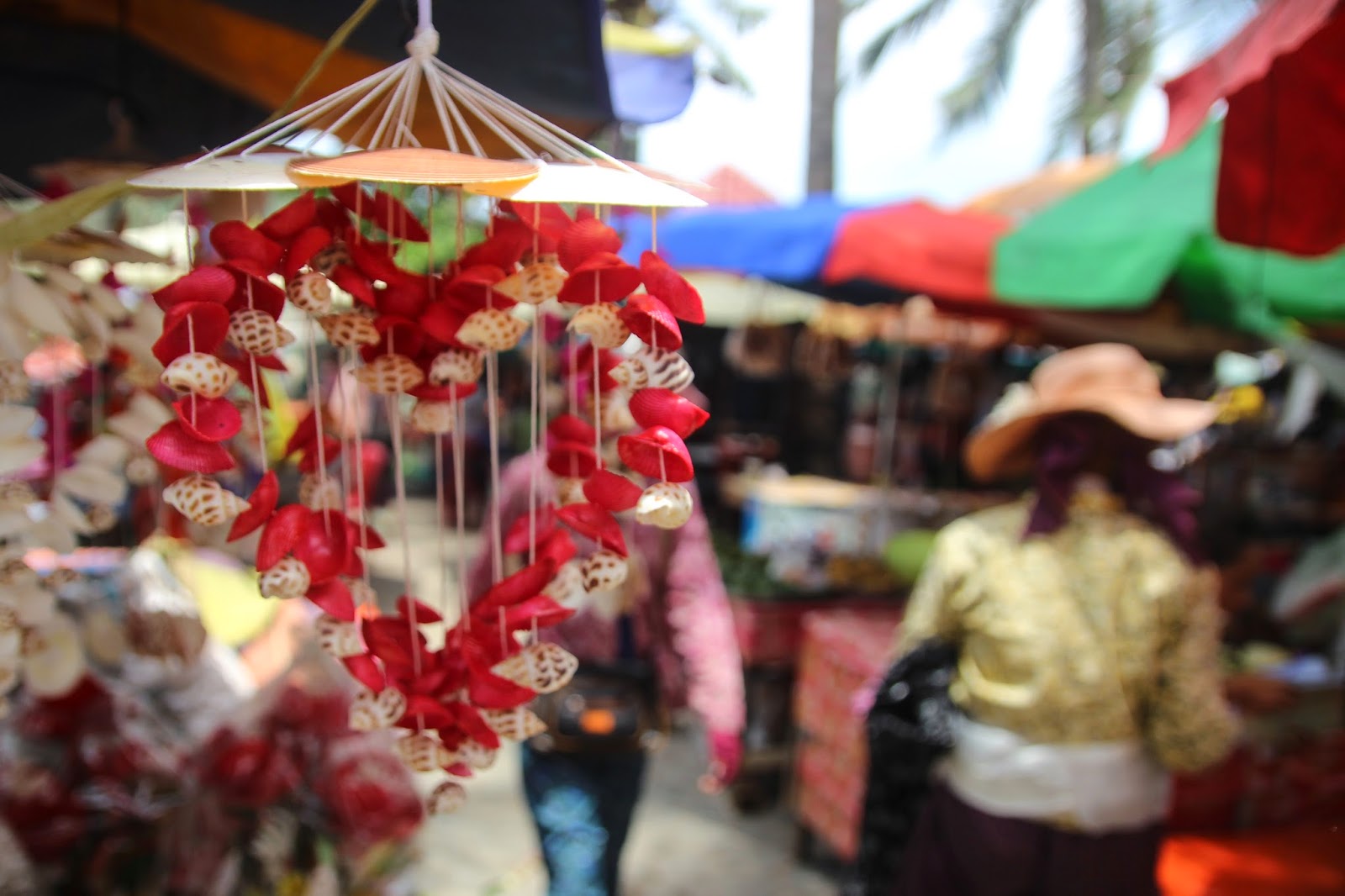 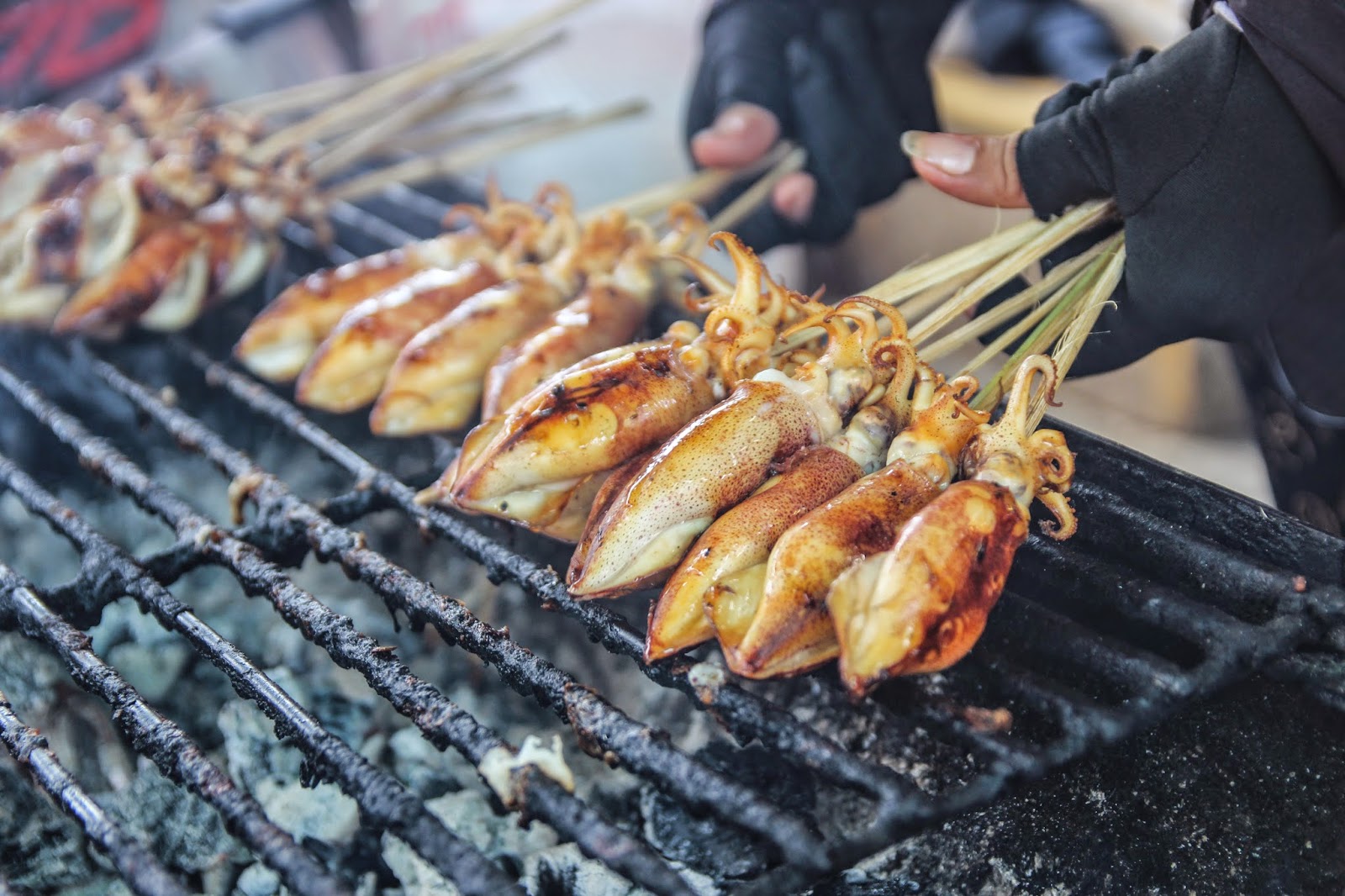 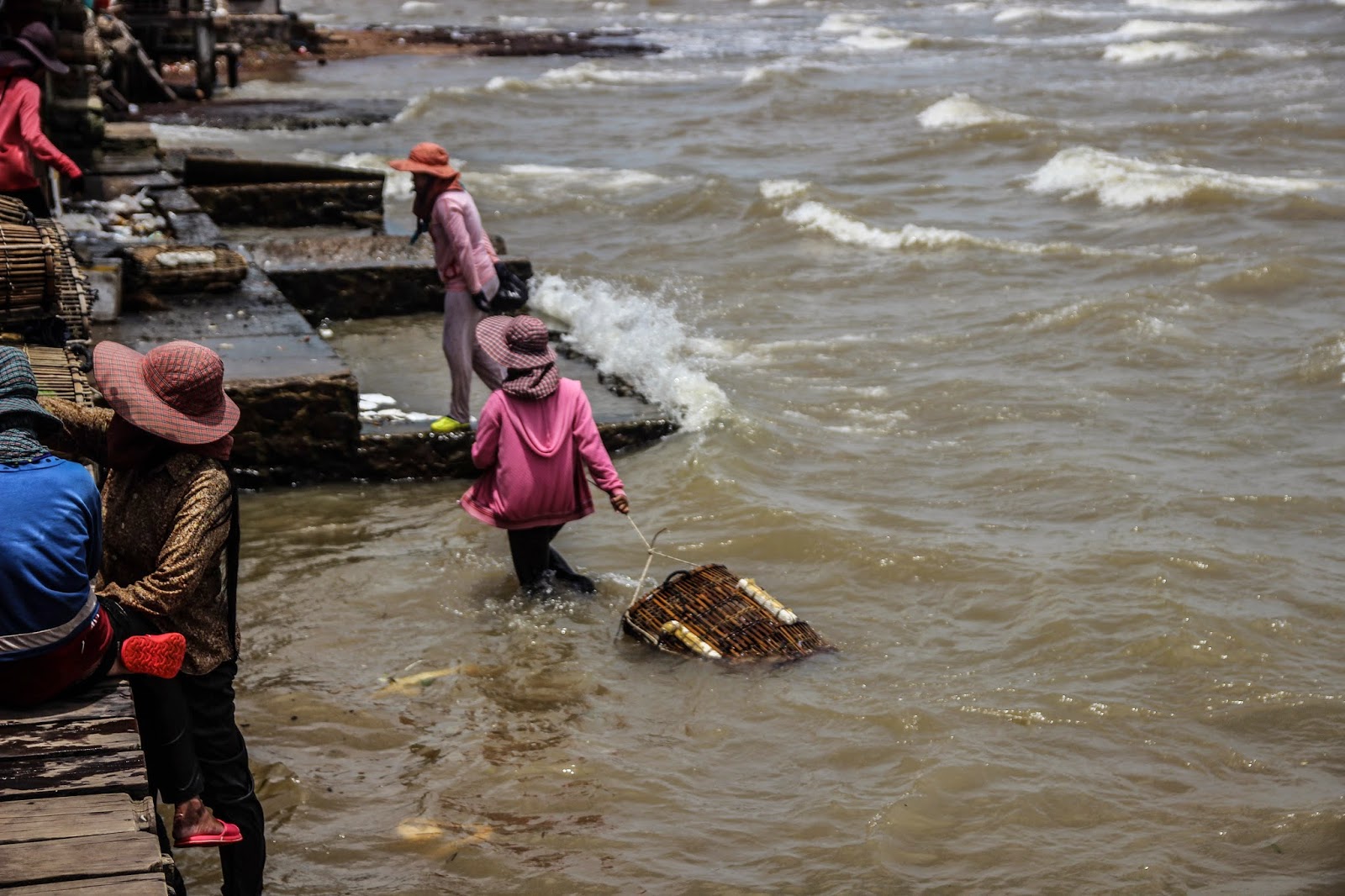 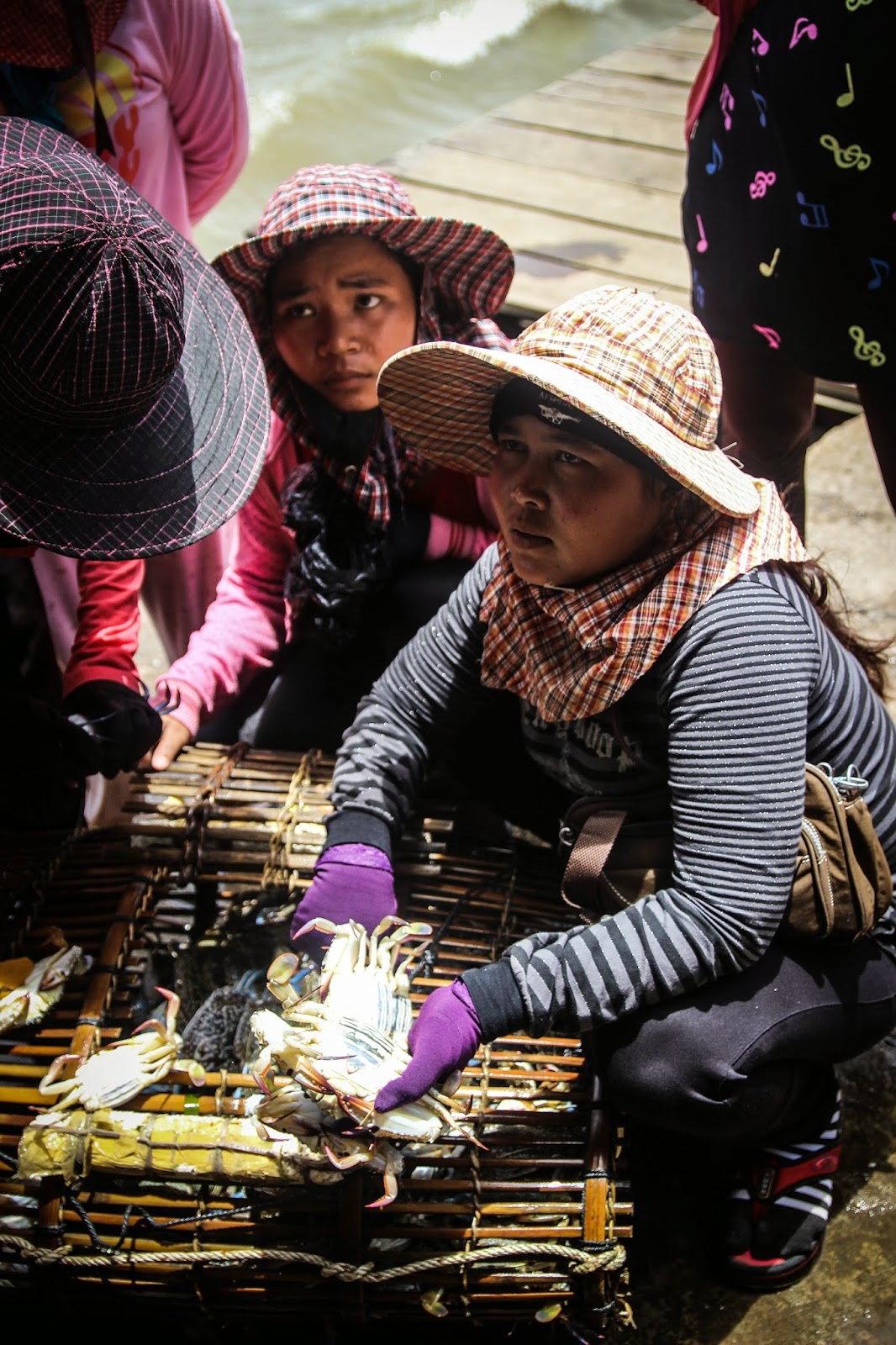 Sopea, the only native Cambodian of our group, helped facilitate the purchase of about three kilos of crabs which were promptly steamed and presented to us.  I picked up a chilled coconut, and a few other folks got other bits - fish and squid and fried treats - and we continued on a bit further, passing a massive statue of a crab, to a set of stilted platforms a few feet away from the beach.  We spread out on one of the platforms, which was covered in mats and had a hammock hanging from either side, with plenty of space for us to circle around the bag of crabs and other food.  Sopea helped remind me how to pull the crabs apart, and in lieu of any actual utensils, we used a crab claw to pull all the bits of meat out of the bodies.  We ate the crabs fresh and dipped into a very spicy garlic sauce, incredibly flavorful for the handful of times I could tolerate eating it! 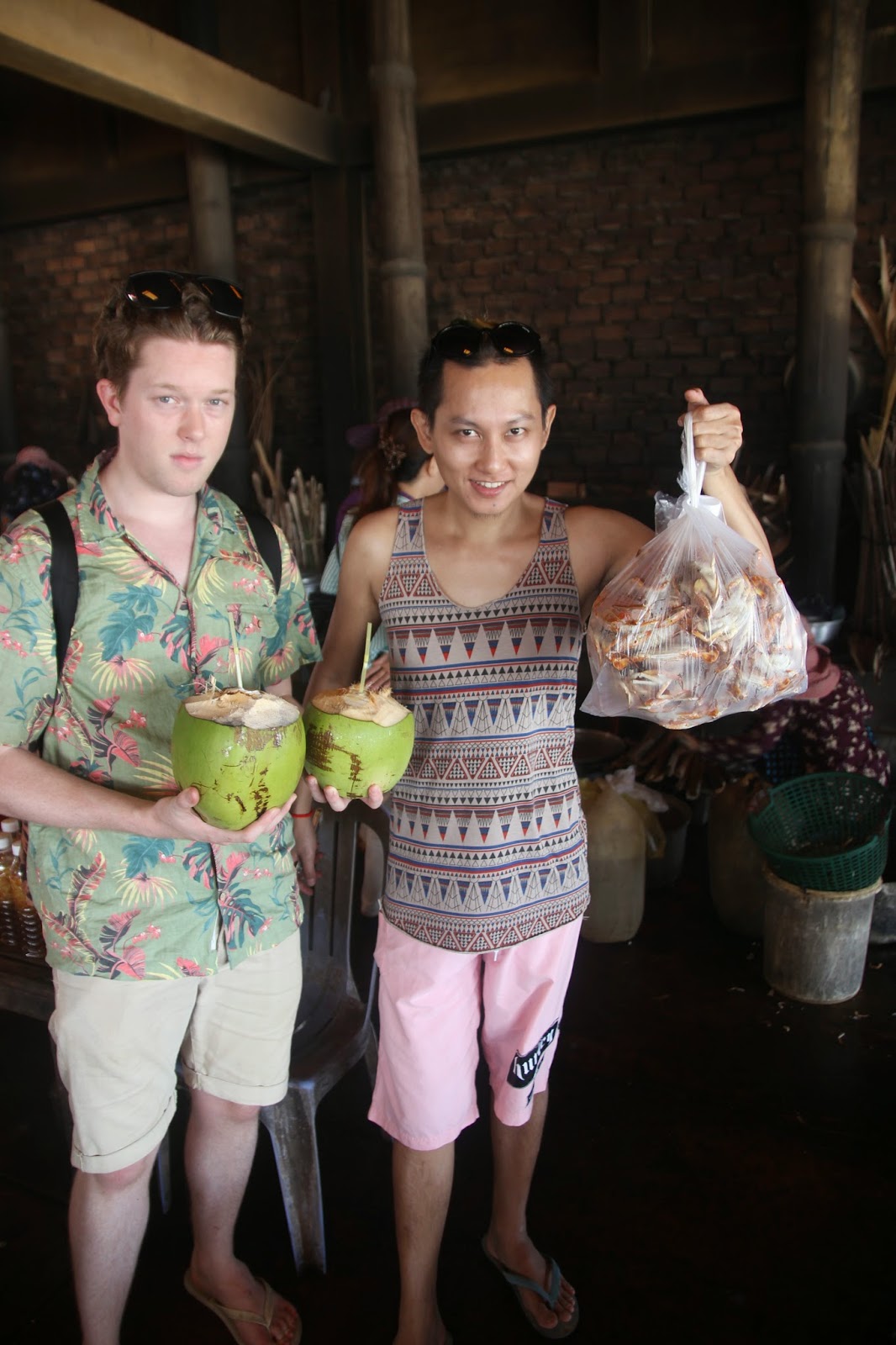 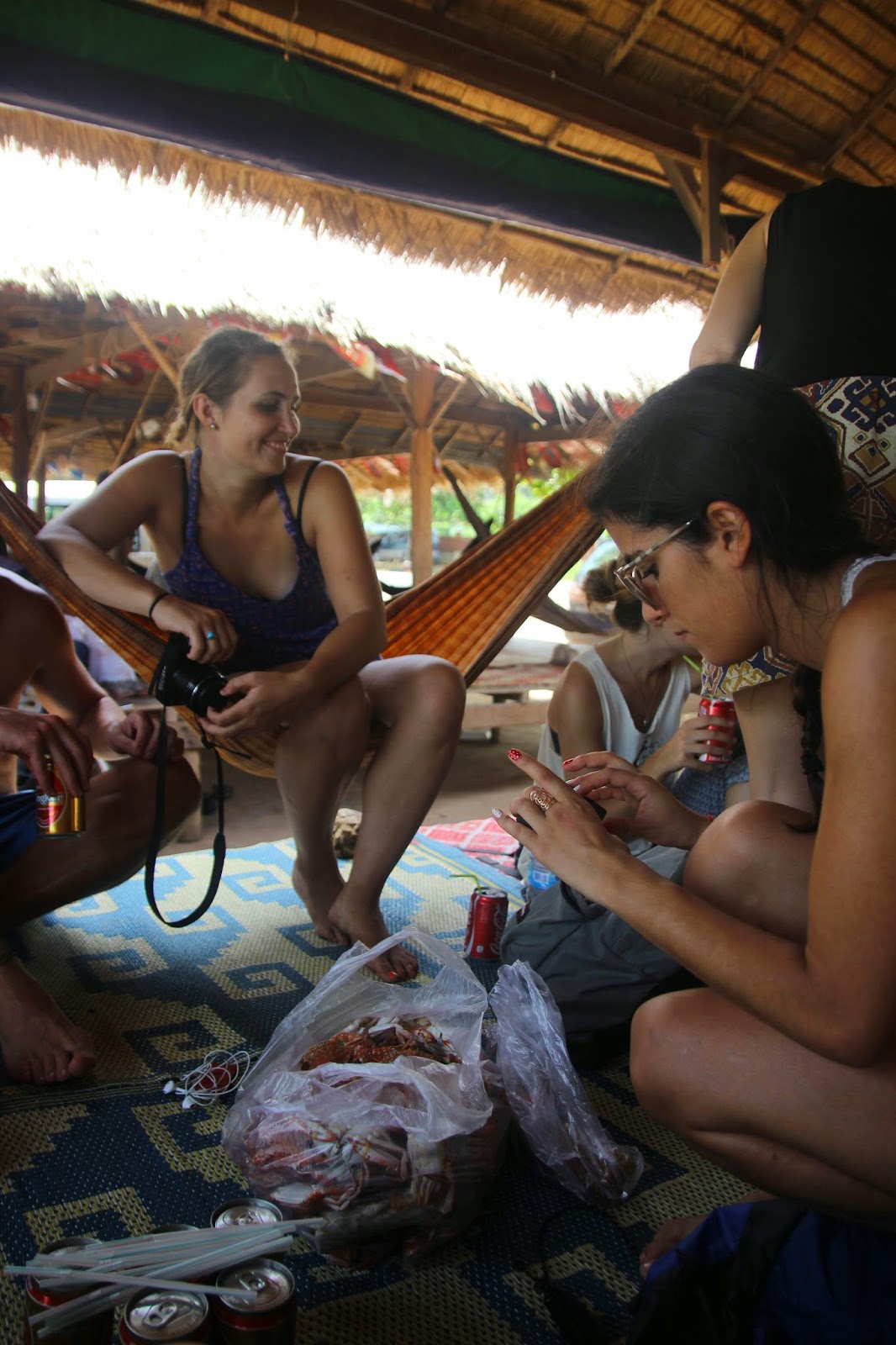 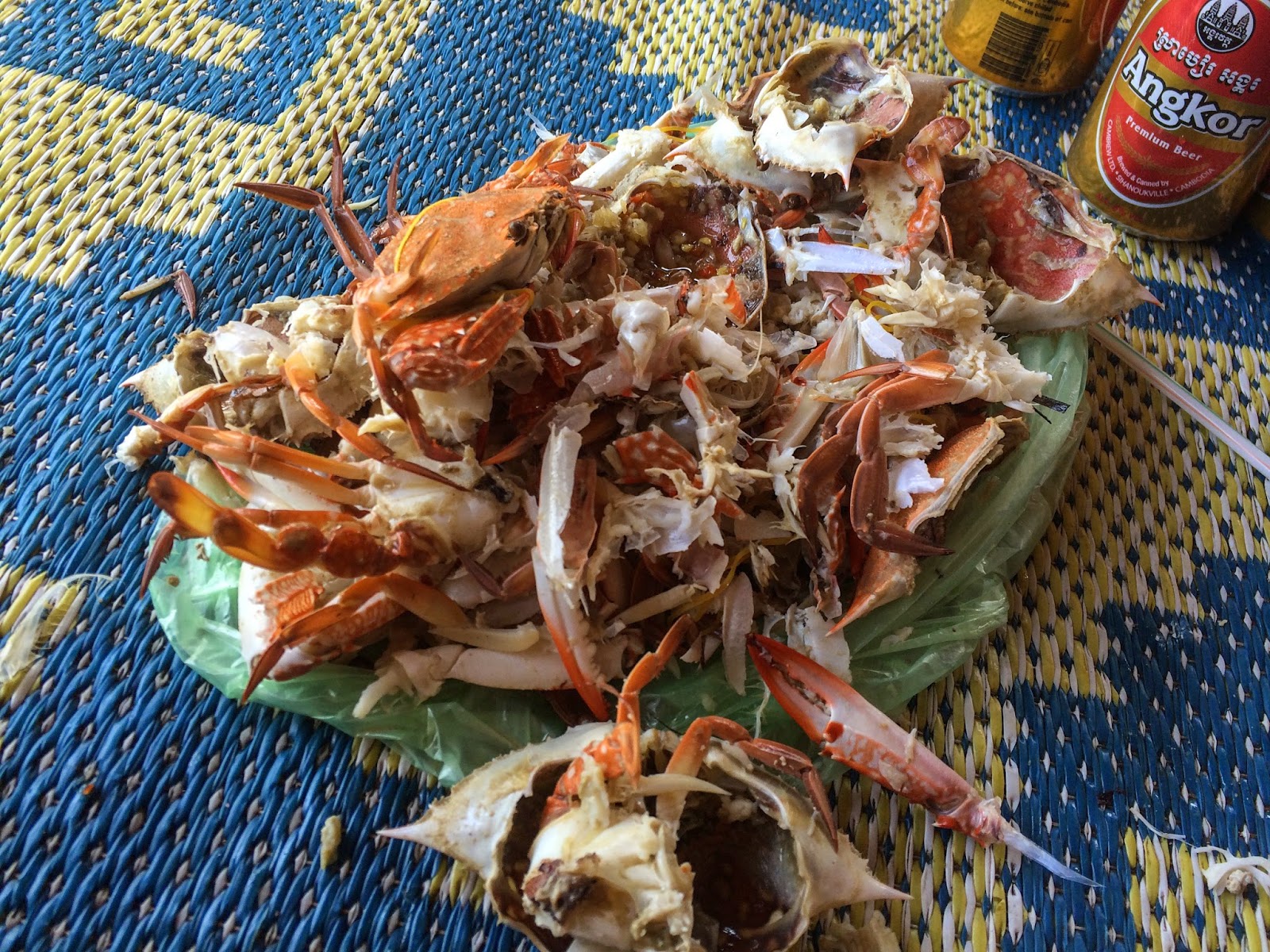 Once we had finished eating and relaxing, we looked to Thomas, our designated leader, to show us where to go next.  He took us further along the road, pulling over to a hostel where he apparently had a friend.  The two discussed something in rapid French, and Thomas relayed to us that we would follow a road that would lead us through some beautiful rice fields, then link up with the main road where we could stop by a lake between two mountains on the way back.  We started off along a gravely path alongside the water, passing handfuls of fishing boats, but not so many beautiful rice fields.  As we made our way further and further, the quality of the road became more and more poor, and we still hadn't seen any of the promised sites, or any indication that we would join up with a major road.  Pippa and Joe pulled up lame with a flat tire at one point, but encouraged us to continue on, saying they would try to get it fixed and call us later.  But the road got worse still, disintegrating down to rough dirt, with massive trenches dug out for construction purposes along the way, eventually ending entirely. 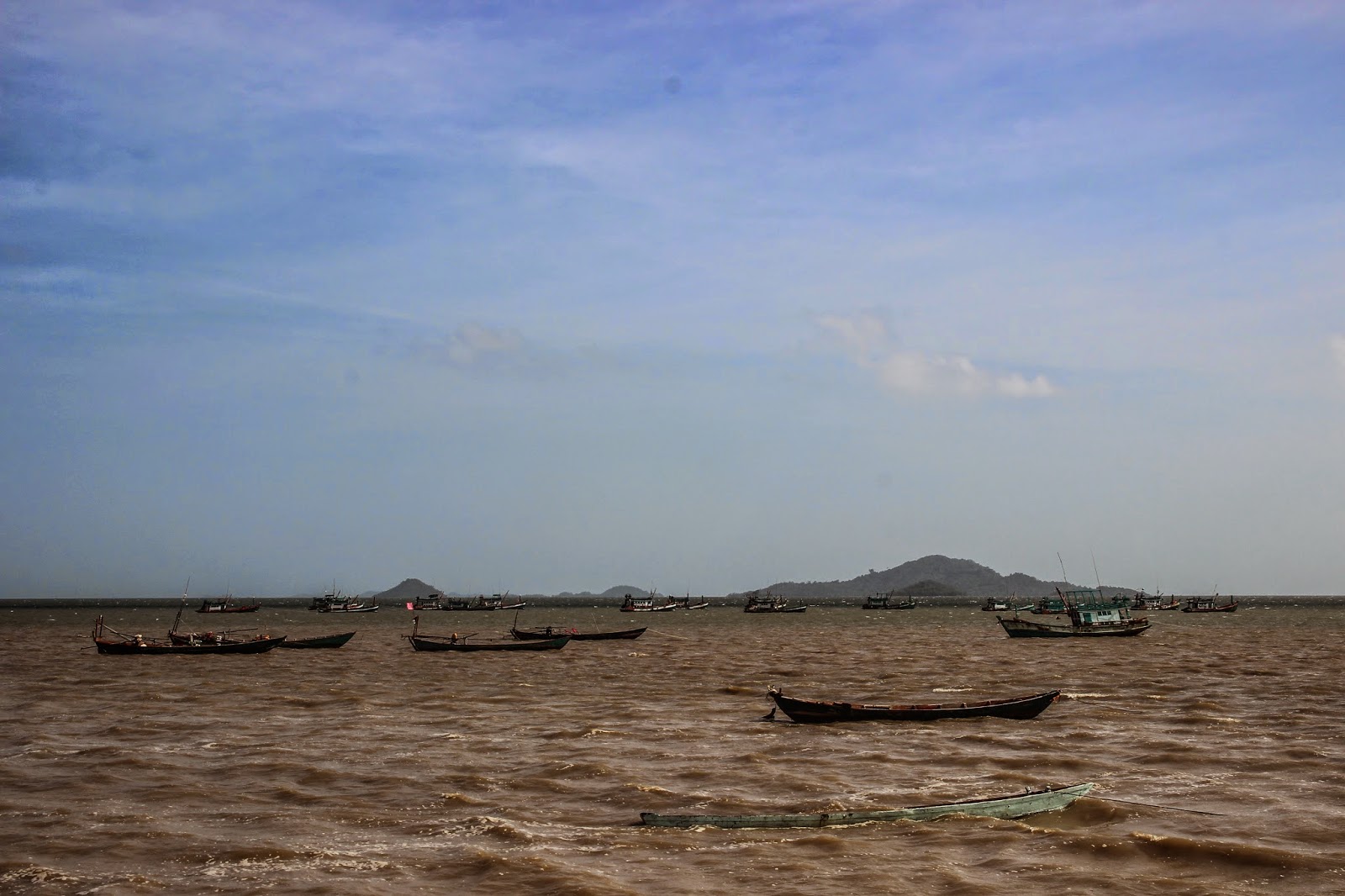 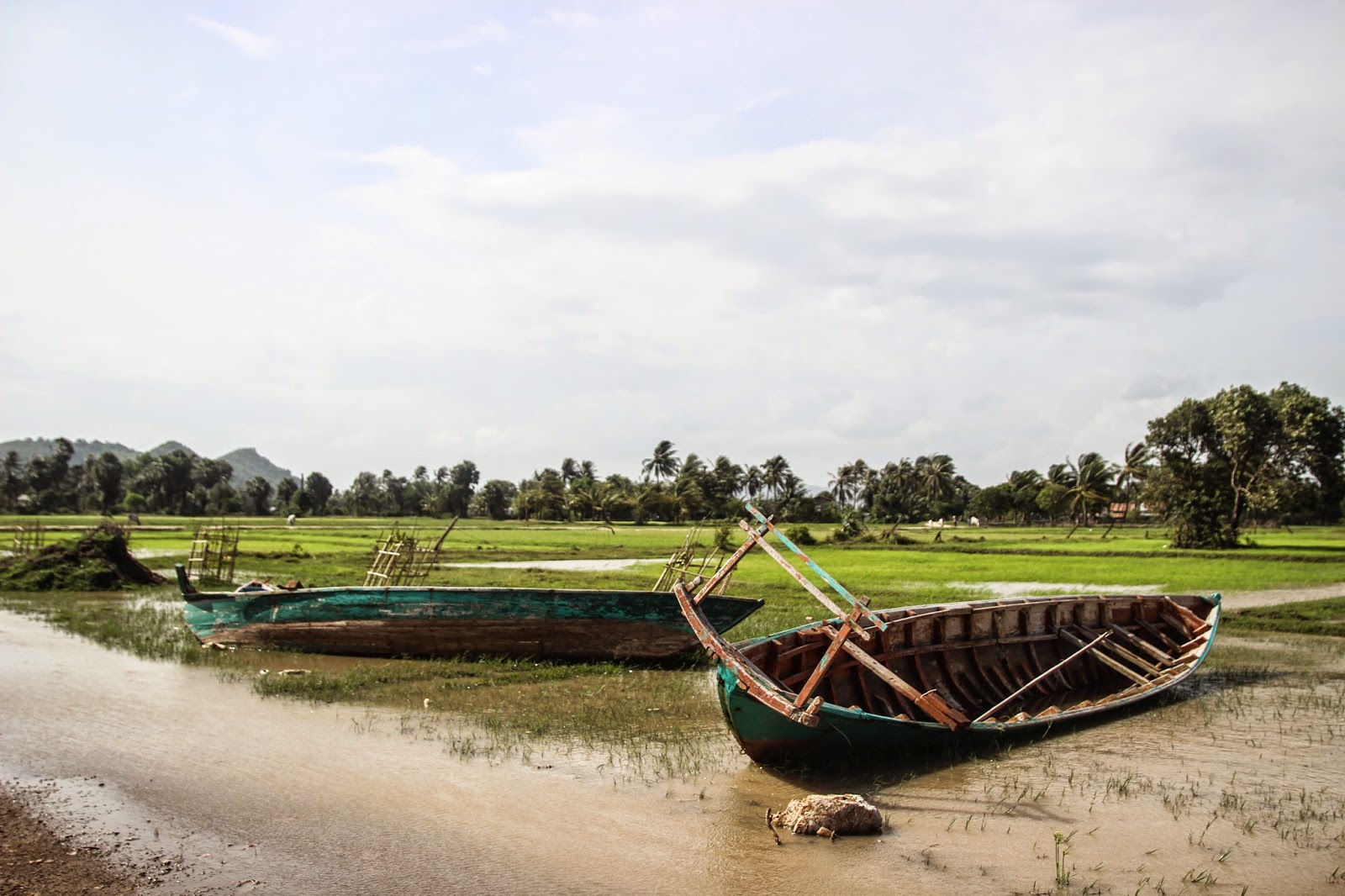 Disheartened a bit, we turned back, and at one point someone got in touch with Pippa to relay the situation.  We waited as Thomas and Sopea zipped back to find them, returning later carrying Joe as Pippa drove the scooter with the flat slowly down the road.  About this time we were wondering how to get it back, and we looked up to see a pickup truck coming our way!  We waved them down and were happily surprised to discover a pair of Aussies driving, and they agreed to help carry the bike back to the hostel in Kep for us as we followed behind.  Once we were back, we got directions to a nearby garage that could fix the flat, so Pippa and Joe took the bike in for a quick repair while we waited at the hostel.

Once we set back off, in theory to find the lake and return home, it was fairly late in the afternoon, and I was getting worried about the amount of light we would have for our return trip.  We topped up on fuel at a roadside stand where giant glass Pepsi bottles full of gasoline were upturned into a funnel into our bikes, a liter at a time, then we were on our way.  When we did start towards the lake, we actually drove away from the direction we had come, confusing us at first, but we quickly realized this was the road we should have taken originally!  We passed by beautiful rice fields flooded with water, then quickly reconnected with the main road.  By the time we reached the turnoff for the lake, it was really getting late, and I wasn't very comfortable taking another detour off the paved road, as I didn't want to drive in the dark.  But I conceded, following the group down the small dirt path.  At least I was rewarded with stunning scenery - flooded fields of rice, smiling waving children, stilted homes, and idling white cows. 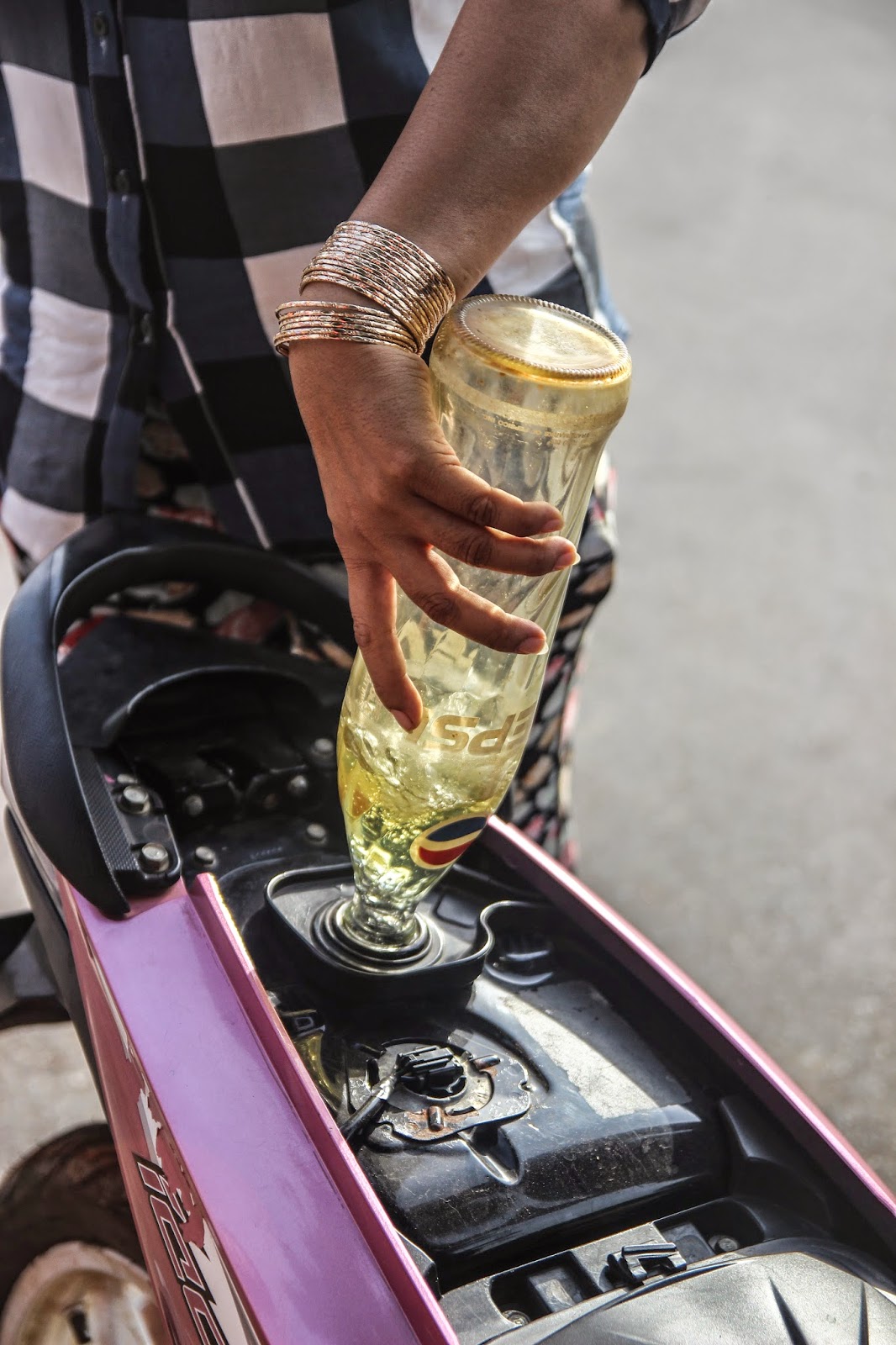 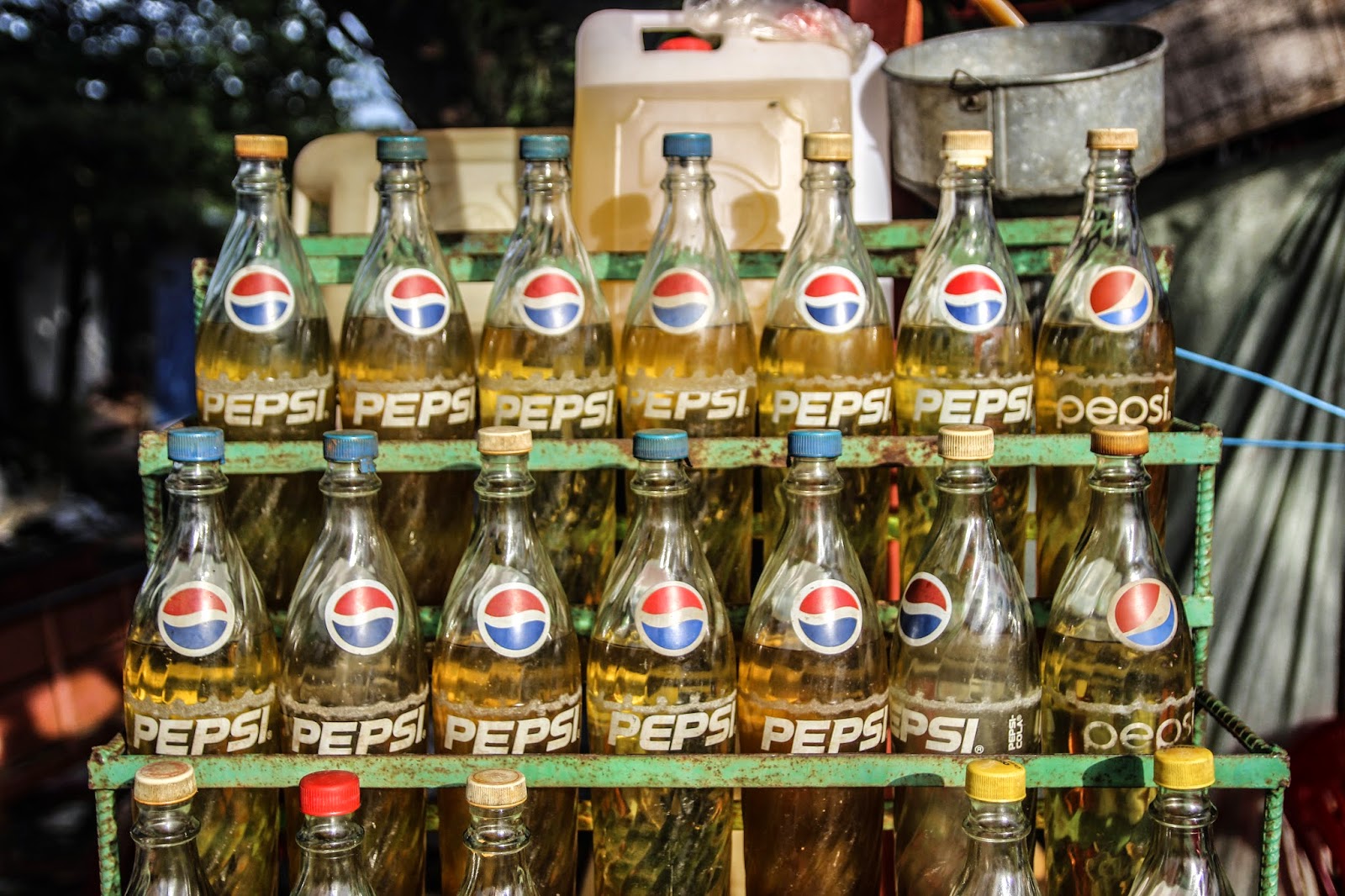 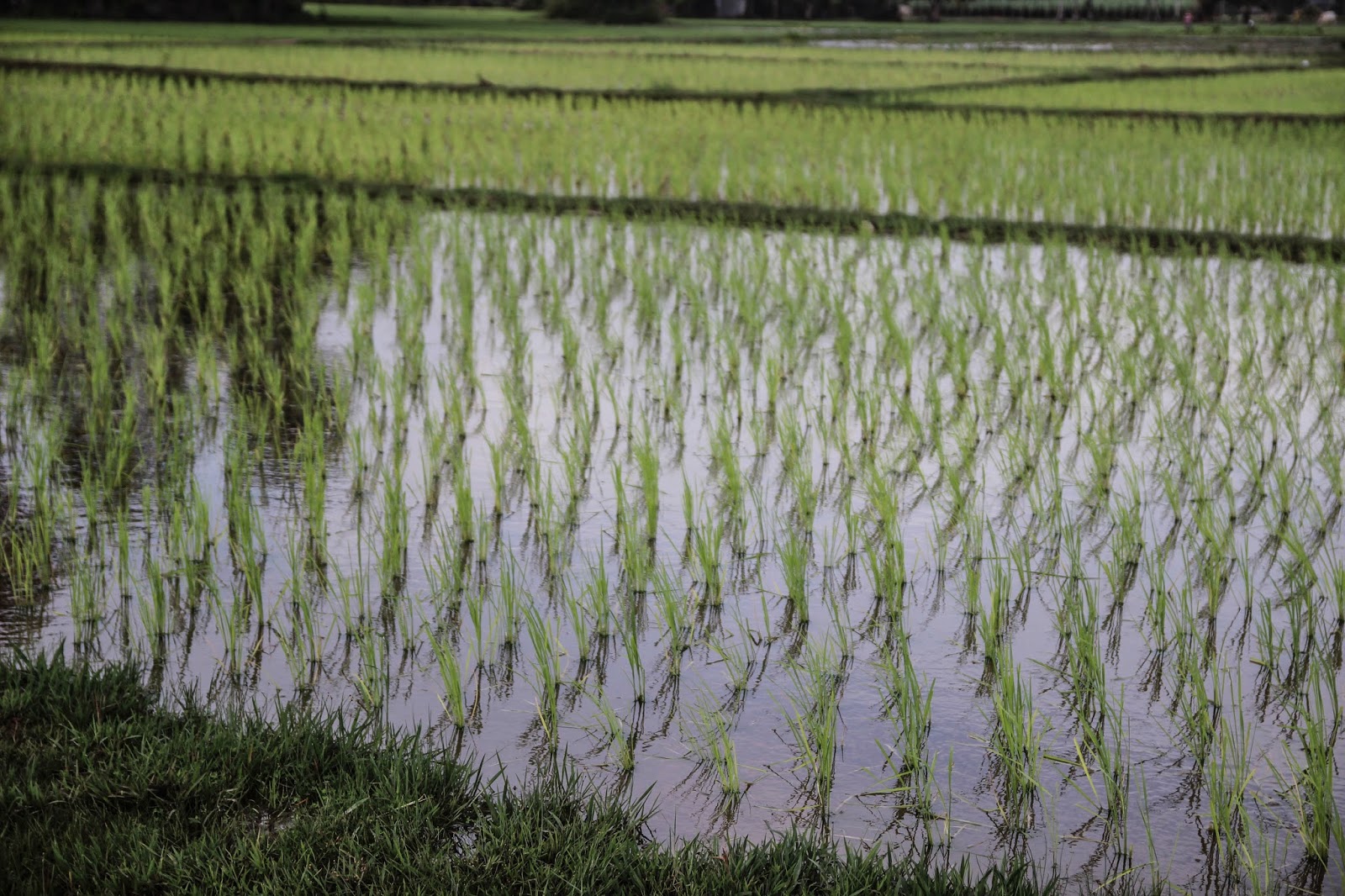 We stopped at one point to double check our directions, topping off with gas again from some locals, as a man and his son on a motorbike piled high with cut rice idled past, and a young boy on a bicycle far too big for him stared at us in wonderment.  We continued on, crossing a railroad track and following the road further until we finally reached the lake, which was itself not all that spectacular a sight as the drive in had been.  To my slight dismay, everyone parked their bikes and immediately scattered, watching the sun dip lower.  A couple wandered off, and Thomas actually dove into the lake for a swim. 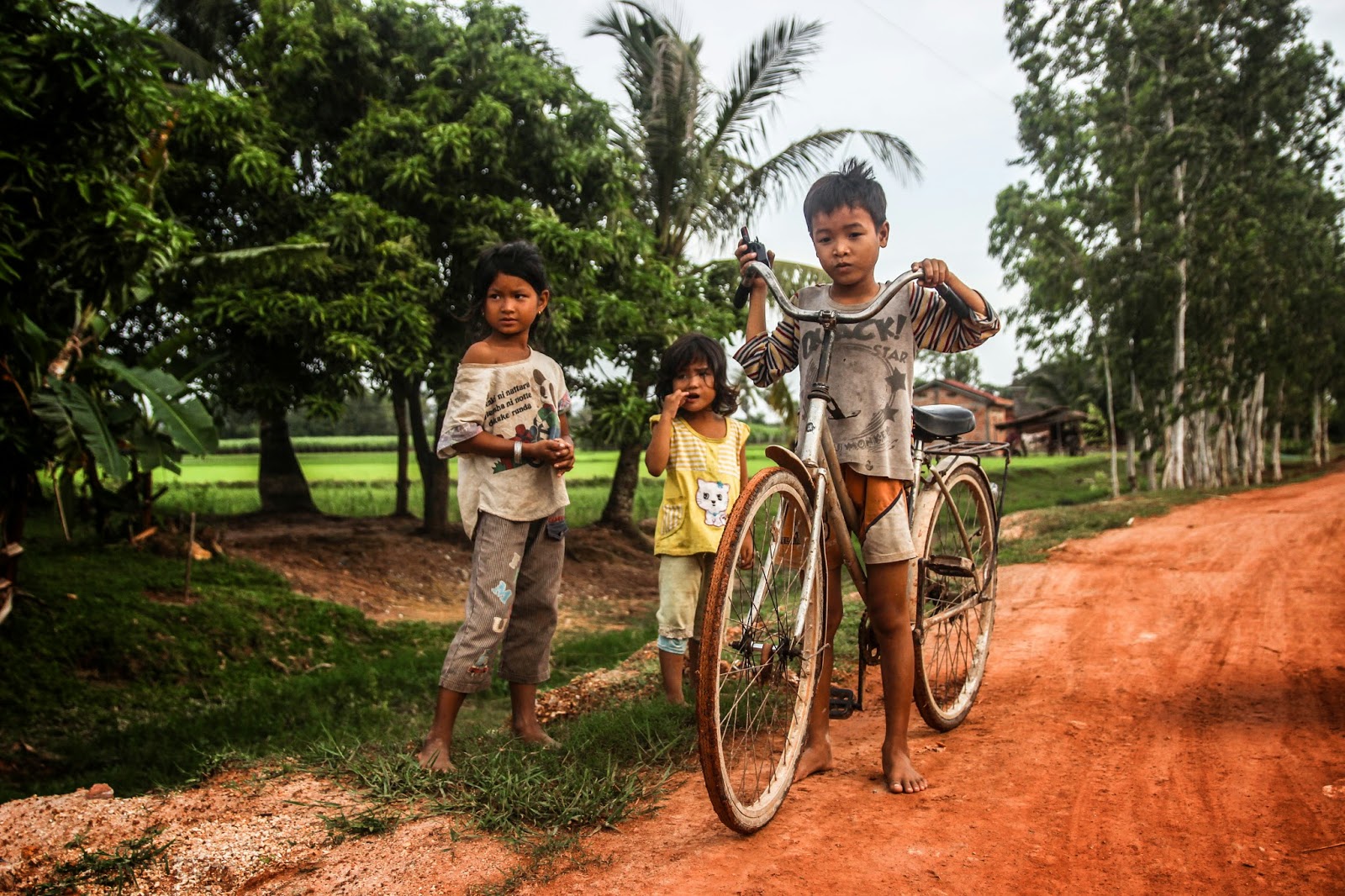 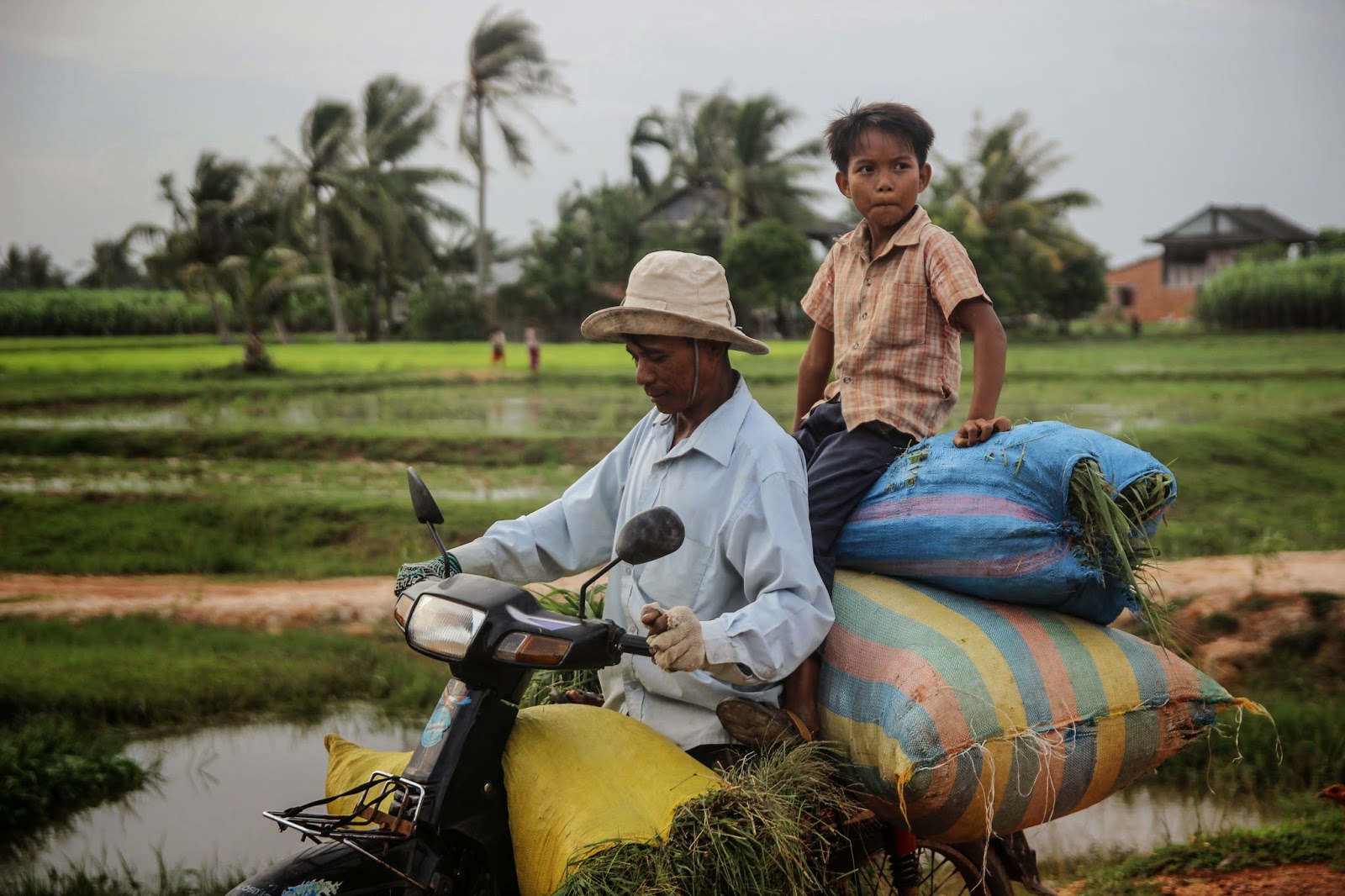 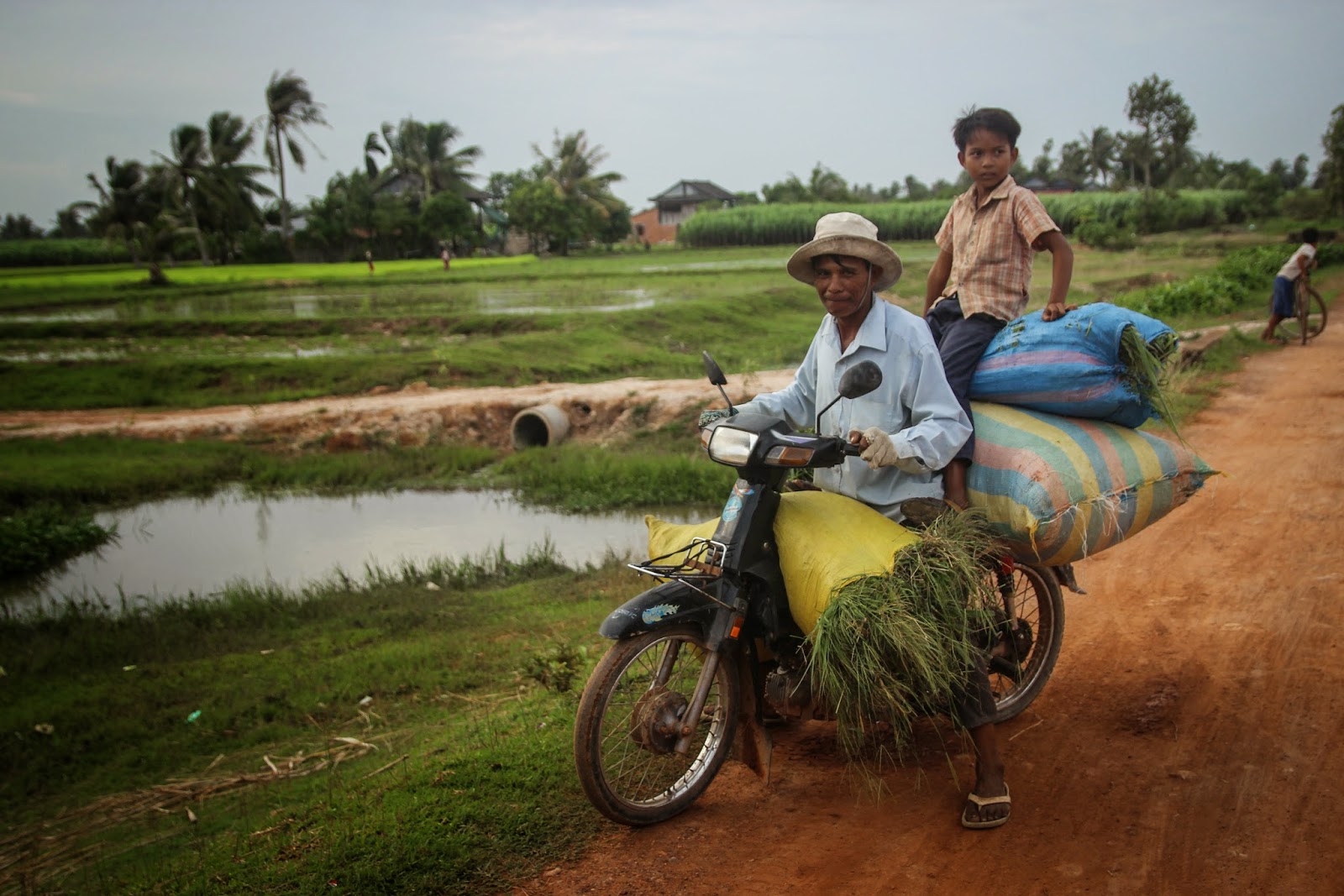 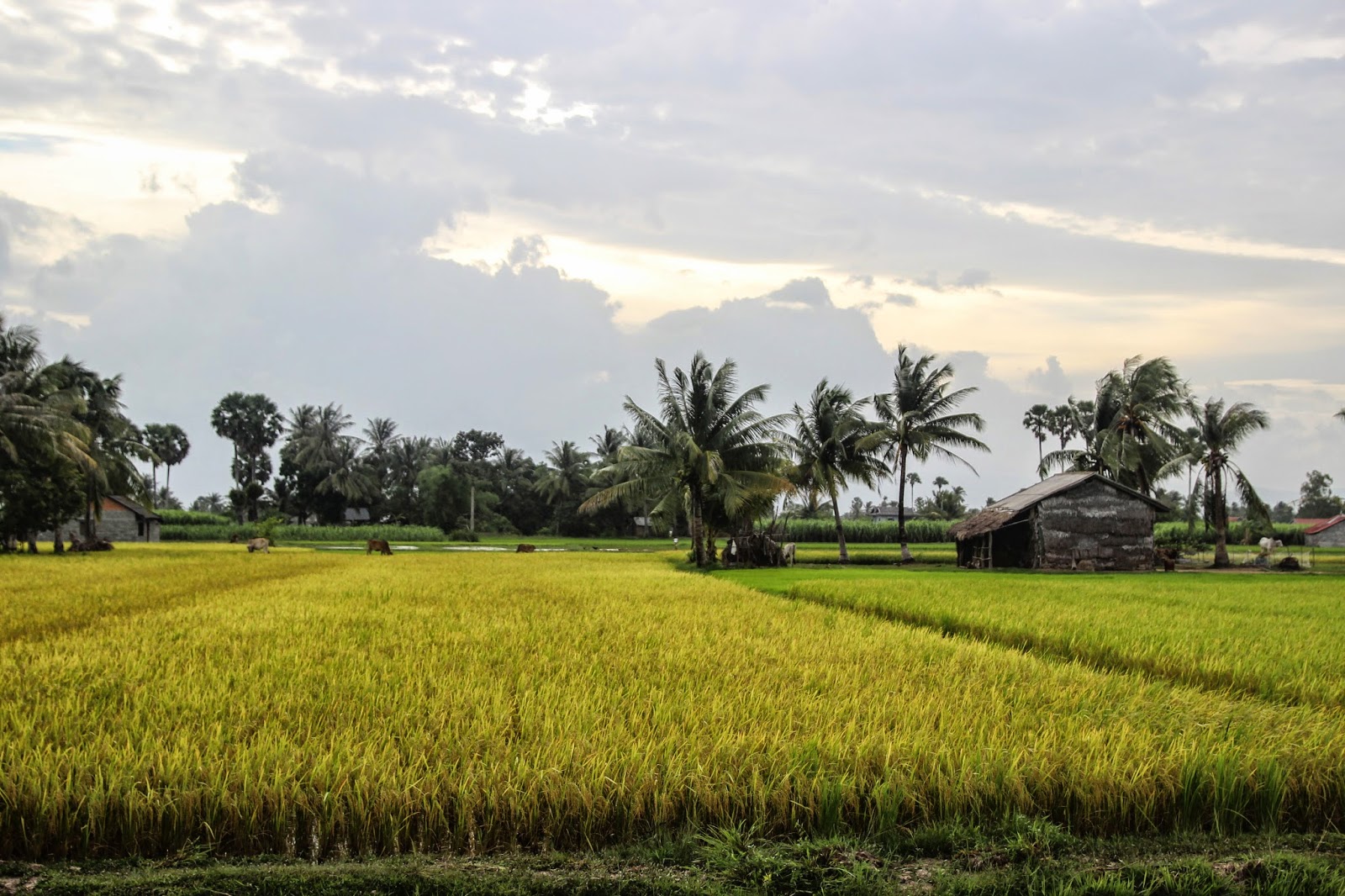 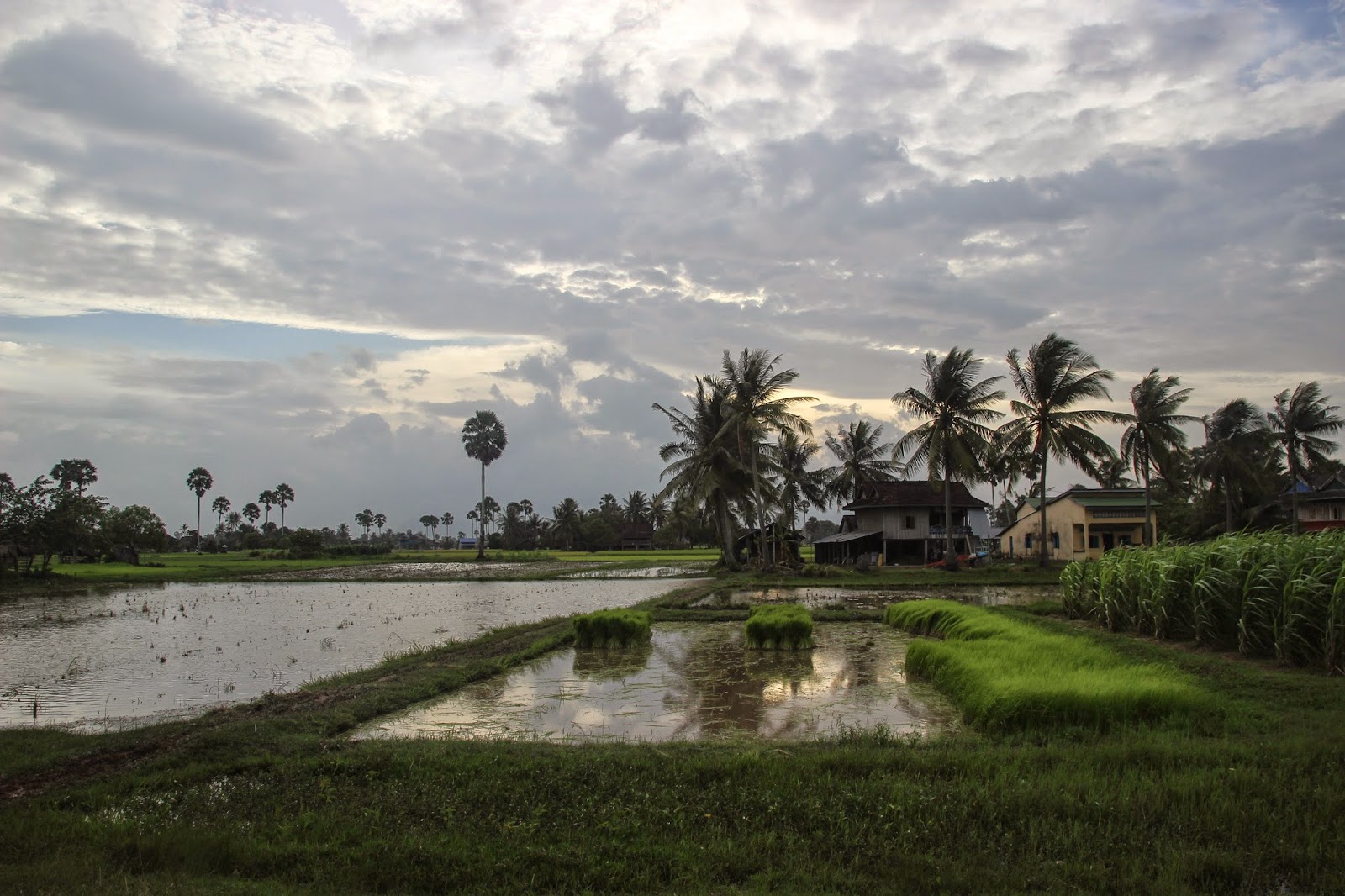 I still desperately wanted to at least get back to the main road before dark, and perhaps stupidly, decided that driving back alone was better than driving back in the dark.  Stephanie decided to stay and ride back three deep on Thomas's bike, and I turned back on my own.  Admittedly, the drive back down the dirt road was gorgeous, as the sky became red from the sunset, reflecting off the flooded rice fields below.  Of course, that was right about the time my camera battery gave out (iPhone to the rescue?).  But, with no one on the bike besides myself, riding was much easier and more comfortable, and I made great time in my attempt to cover as much ground as possible before full dark.  Despite the dirt and inevitable bugs hitting me, it was still exhilarating to be on the bike at higher speeds for so long.  I can now appreciate the people who enjoy taking motorcycles out for long rides, and it did nothing but convince me even more I want a scooter of my own one day.  That said, the drive was exhausting towards the end.  When I finally reached Kampot it was fully dark - thankfully the town was lit up, the streets packed with bikes and people venturing out for dinner.  Once I got beyond the city to the long, unlit road to Green House, finding our guest house became a slight challenge, as I couldn't find the barely marked dirt road to turn onto.  I wound up doubling back, thinking I had passed it, then doubling back again, asking two local girls who pulled up near me for help, driving next to them so I could see a bit better, finally finding my turnoff. 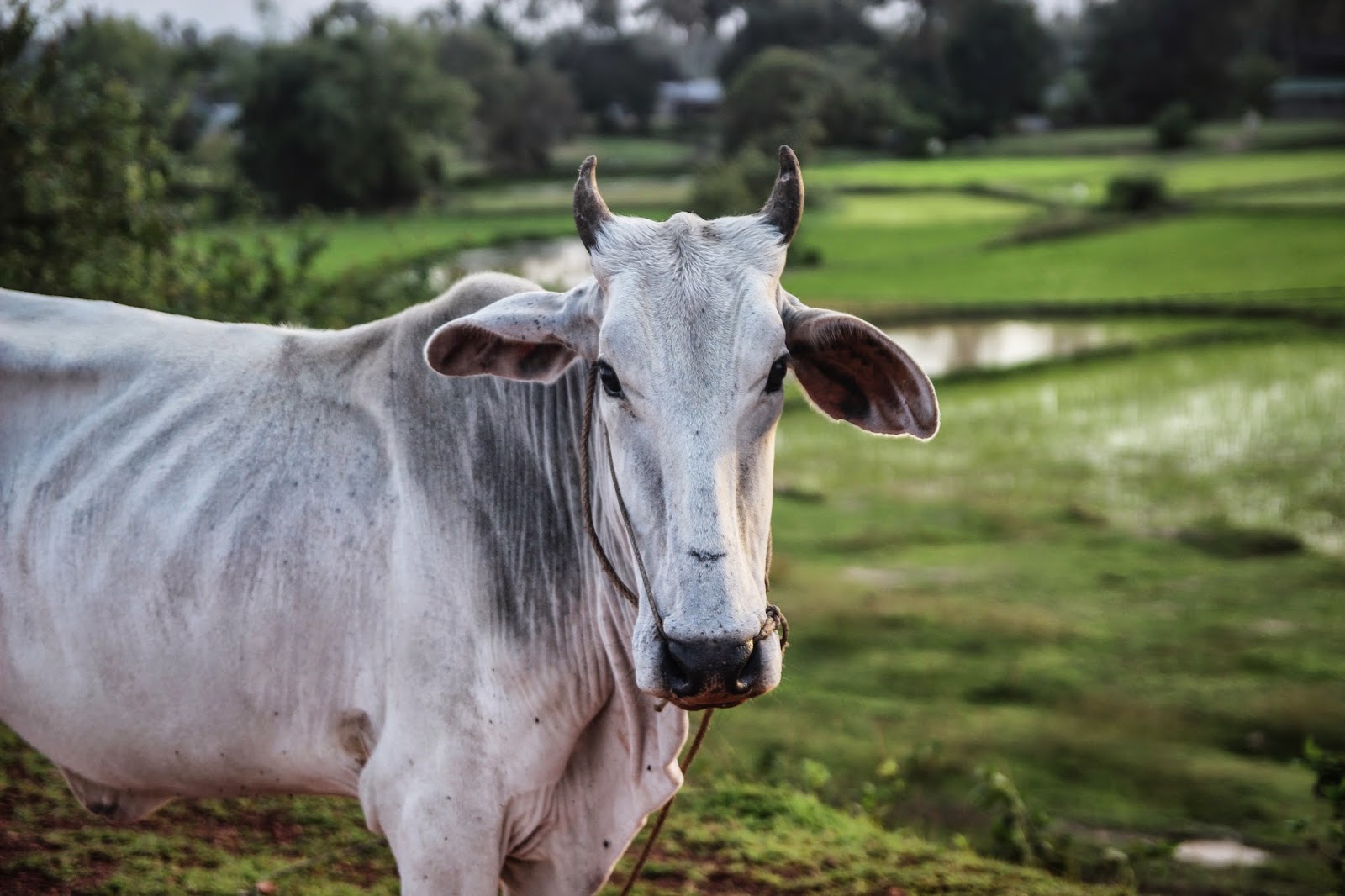 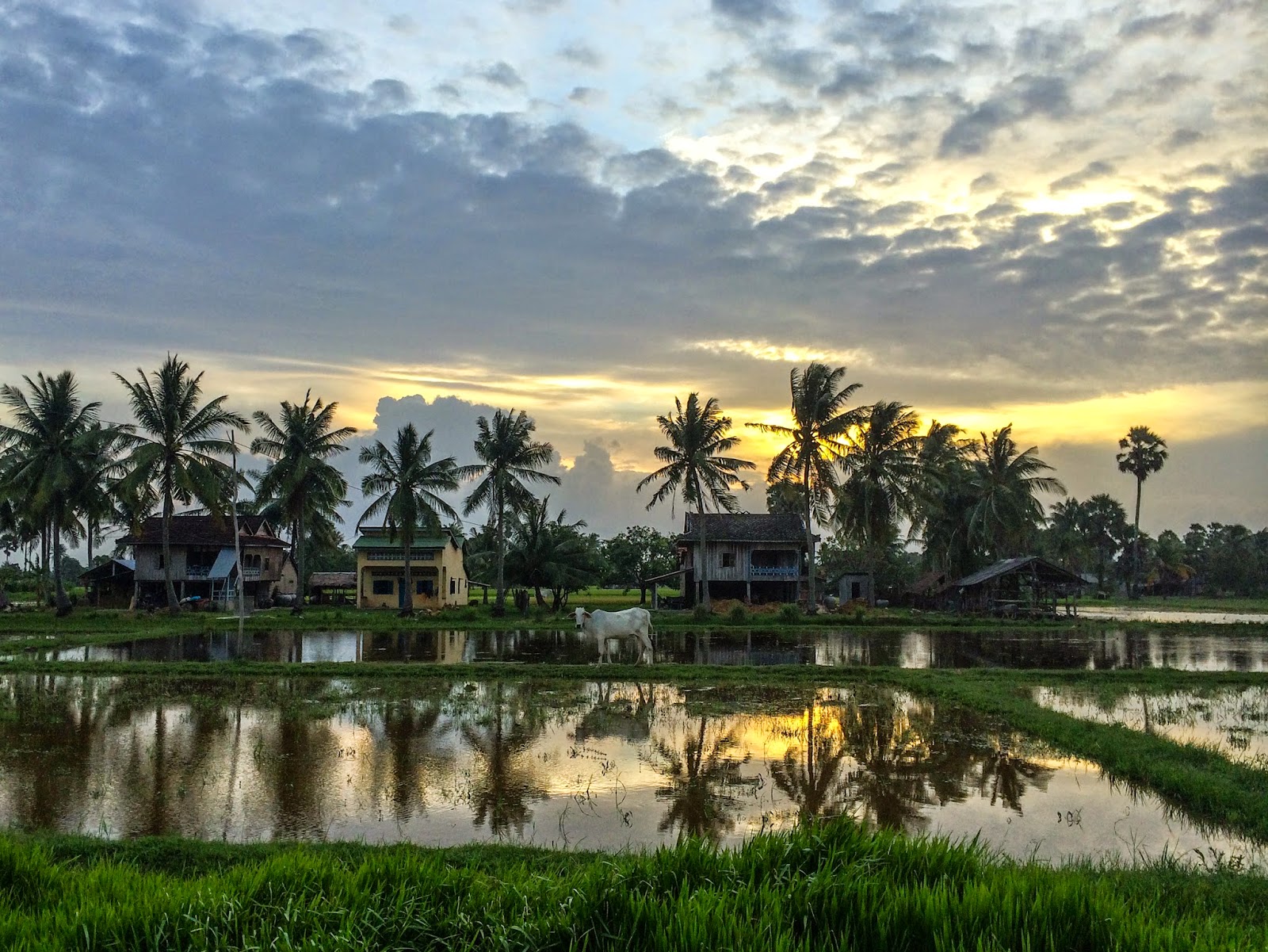 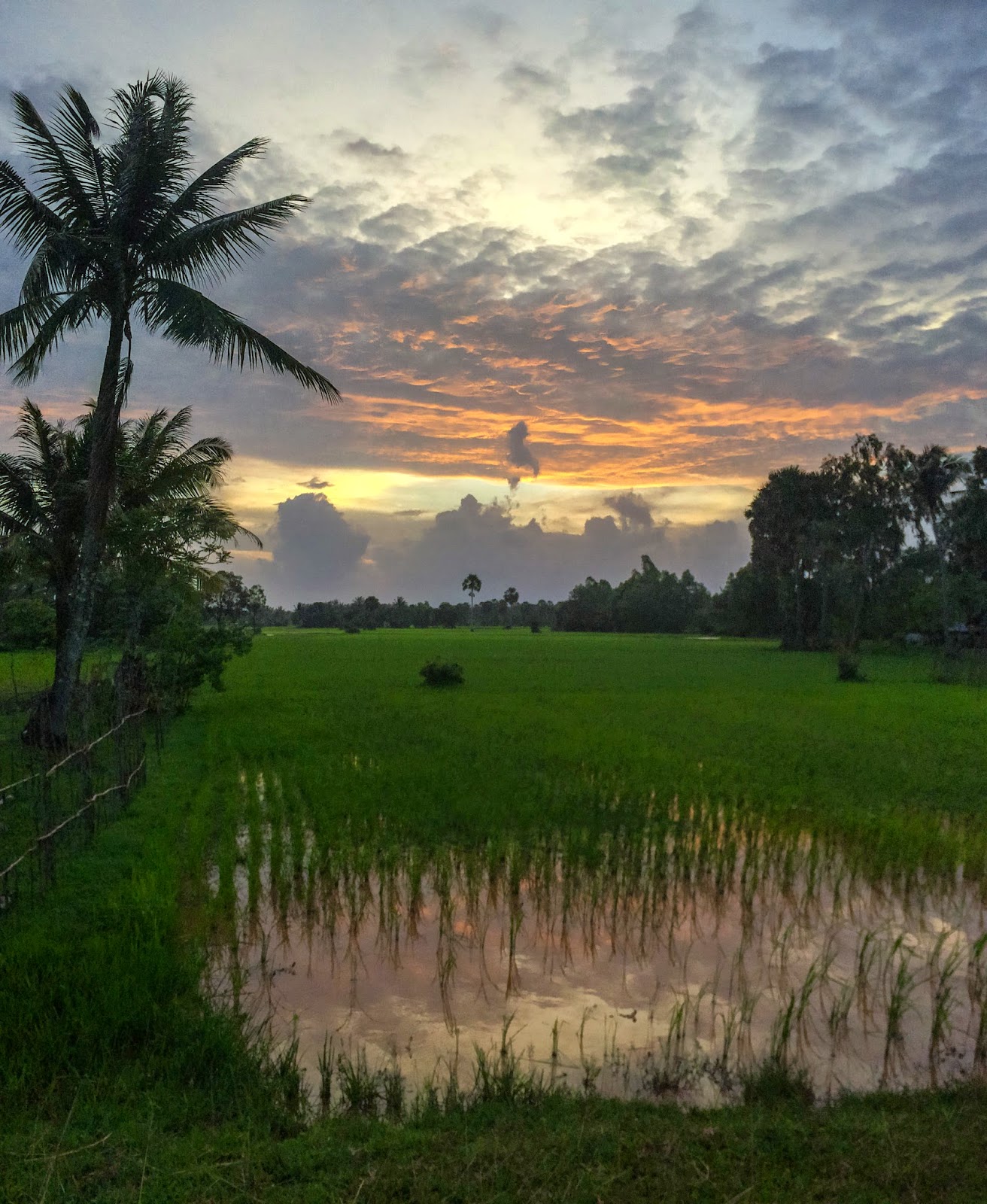 Once I returned, my wrist ached from holding the gas for so long, and I was filthy from the dirt and bugs of a full day of driving on the open road.  I saw Hannah immediately, who had stayed behind to nurse her boyfriend who had come down with a terrible case of food poisoning, and we chatted over dinner as we waited to hear from the rest of the group.  They had made a stop in town for dinner, so I had a much-needed shower and sat down to write on the upstairs deck until everyone returned, had showers of their own and settled in.

The next day turned out to be sort of a recovery day for many, as we finally got in some relaxation time out on the porch and, when it started to rain, inside the common area of Green House.  We pulled tables together and gathered around for lunch and conversation lasting through the early afternoon, until it was time to get ready to leave.  When the minivan arrived to take us back - I would be returning with the group since Joe and Pippa would be staying an extra day and returning on their own - Debby, Sopea, and I hopped back on our rented motos and made one last drive into town to return the bikes.  The minivan picked us up shortly thereafter for a long but smooth trip back into Phnom Pehn.


I was immensely grateful that the group of coworkers included me in their weekend plans, and very happy that I had wound up saying yes to the day of cruising around on the motorbikes.  As exhausting as it turned out being, as frustrating as it was in moments, it was a fun, enjoyable adventure, and it's certainly a day that will stand out in my mind when I think back on my time in Cambodia.  After another full day back in Phnom Pehn, I would be saying farewell to Stephanie once more, setting out for Siem Reap and the incredible sights of Angkor Wat.
Posted by Outlander Abroad at 2:02 PM