As it is most everywhere I travel, the food and the activities centered around food were extra special to me in Portugal.  From the simple tasks of visiting the local grocery store and fixing dinner each night, to being invited into homes for incredible meals, to the wonderful nights out at various restaurants.  Since João and I shared cooking duties at home, I was able to sample a range of traditional home-cooked meals, as well as introduce him to a few of my own favorites that I was able to recreate.  One of my personal favorites was incredibly simple - fresh, sweet bread that we picked up weekly from a tiny local shop a few blocks away.  Toasted and buttered, it made a perfect breakfast or midnight snack.

Some of the most special evenings were those when we were invited over to join João's friends or family for big traditional Portuguese meals.  His cousin invited us over on two occasions - once just after we finished recording him and his band, and again when the video was complete.  For the first, they prepared rojoes, a savory slow-cooked pork dish with a side of roasted potatoes and grelos, a local green, which we seasoned with olive oil and salt.  We started off with bread and fresh, fresh cheese, and finished up the meal with a dessert of sweet noodles with a custard-like flavor, topped with cinnamon.  (I've noticed the Portuguese that I met topped most everything sweet with cinnamon, and everything tasted that much more incredible.)

For our second incredible meal, many weeks later, we were served soup to start with codfish, potatoes, beans, and grelos, with another fantastic dessert of a sweet rice pudding-like dish, topped with fresh chestnuts, dried fruit, and cinnamon.  During this meal some of the extended family were present, and I found myself bonding with one of the youngest members at the table (joking that we had bonded over a joint lack of understanding of what was being said), and delighting João and his cousin by attempting to read some of the childrens' books in the room, struggling with pronunciation but able to figure out at least a few of the sentences with my limited (but growing!) knowledge of the language.

Another gastronomical treat came from our friend Cristina, the owner of a beautiful vintage shop in Aveiro, who invited us over for a home-cooked traditional meal typically served in Portuguese households for Christmas.  We again started off with fresh bread and cheese (this time flavored with fresh parsley), following it up with bacalhau no forno - dried salted cod purchased directly from the local fishermen which is then rehydrated with liquid and slowly baked in the oven until it's tender and flakey.  For dessert, we had leite creme, a custard-like dish similar to creme brulee, with a bright, lemony flavor and a light caramelized sugar topping, done by placing a hot iron over the dish. 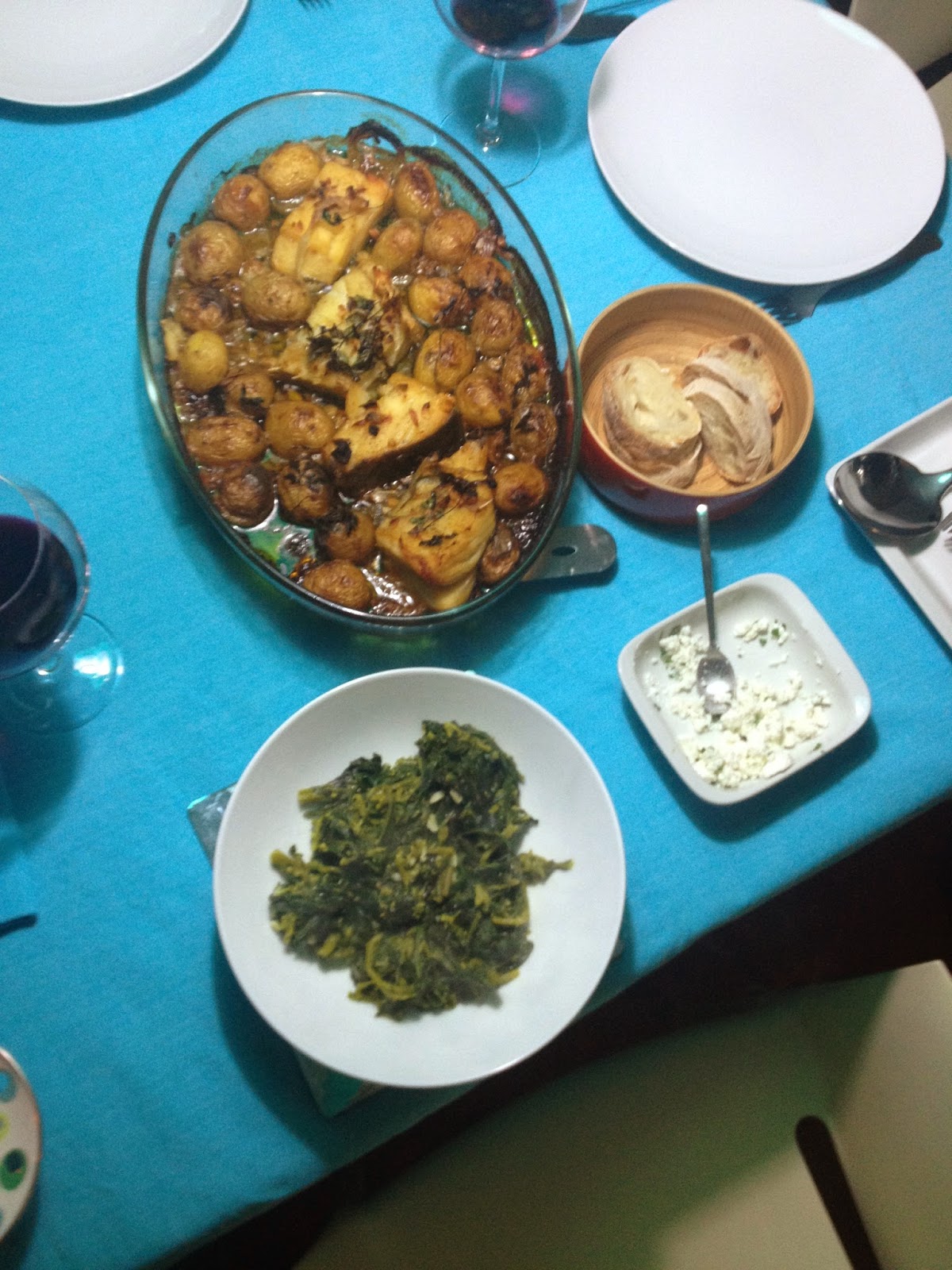 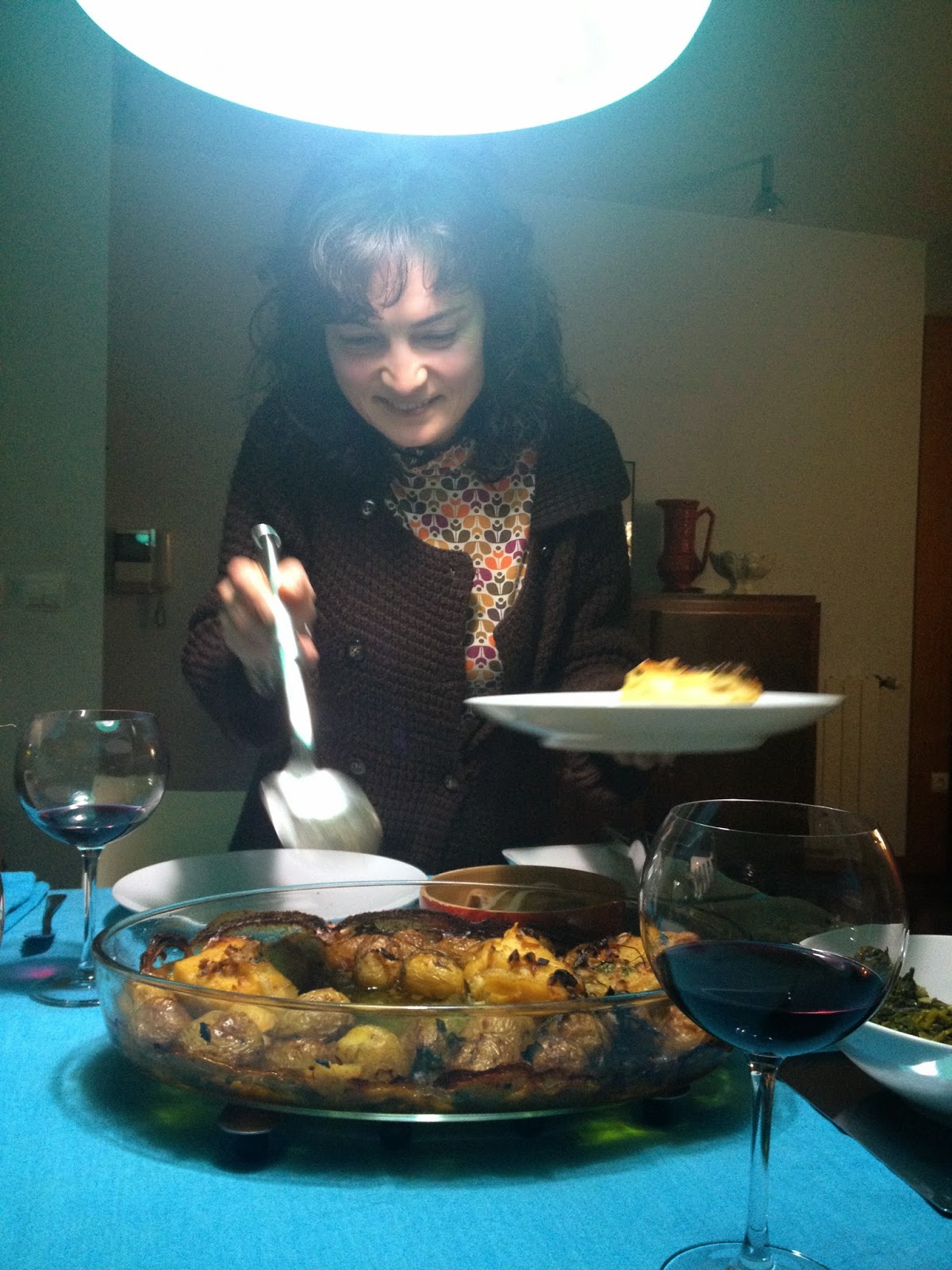 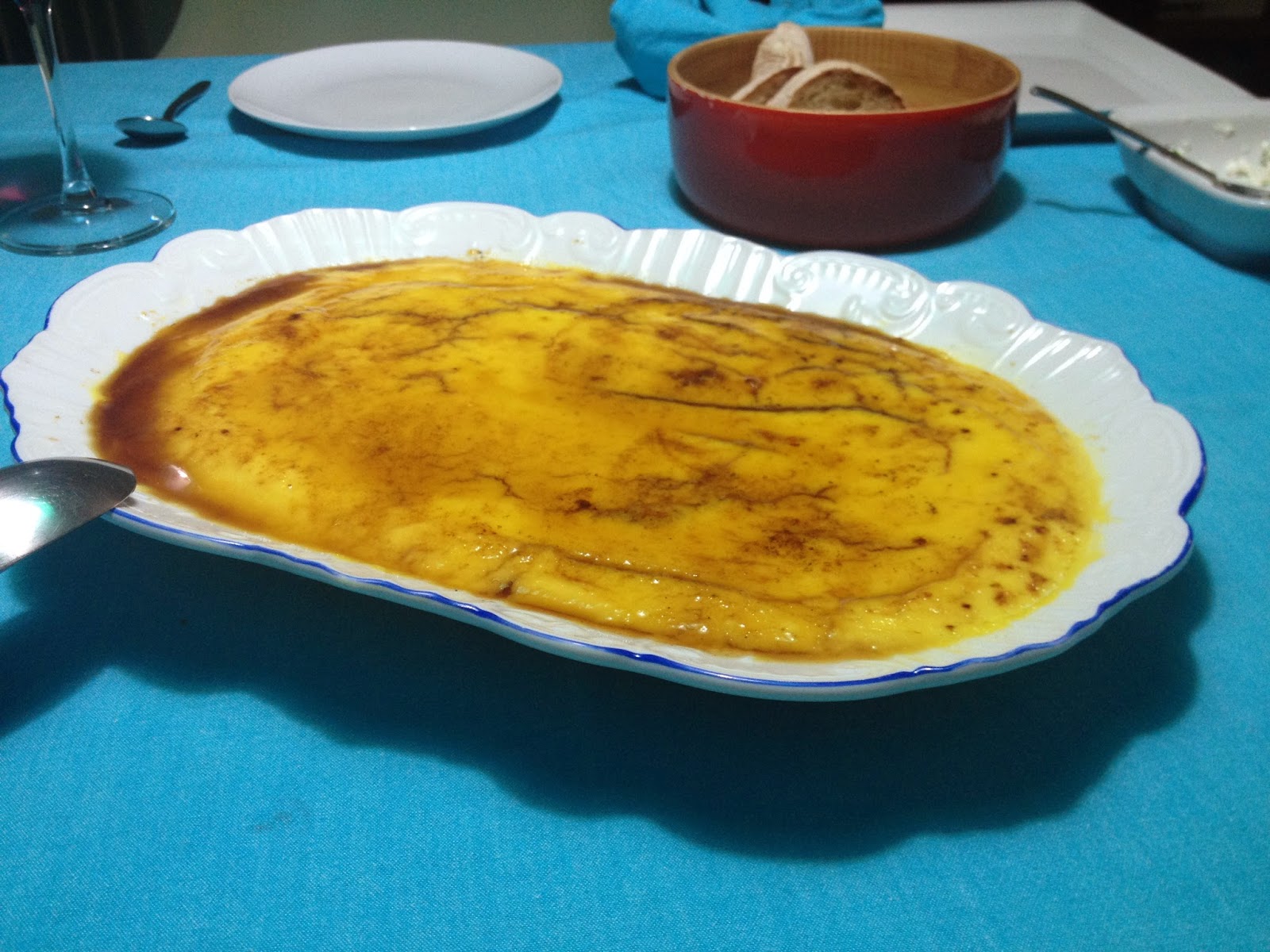 The best part of these meals was not only enjoying the actual food itself, but hearing about the origins of each of the meals, and how they tied into the Portuguese culture, especially Aveiro's strong ties to fishermen and the sea.  It was also a treat simply to be invited into these homes, to hear their experiences and share my own.  It was incredibly humbling and very dear to me that they were so willing to include me in these moments.

As another treat, on one of my final nights in Aveiro, I took over Cristina's kitchen to host a bit of a dinner party for some of our friends before I departed for further adventures eastward.  I shared some of my favorite simple dishes from back home - cooking up pasta with pesto and fresh vegetables, topped with arugula and a squeeze of lemon juice, and baking up a batch of orange and chocolate scones to share for dessert.  Between all the food and the remains of a bottle of whiskey, it was a great evening with friends, and a wonderful way (I hope!) to show my appreciation for them welcoming me into their city. 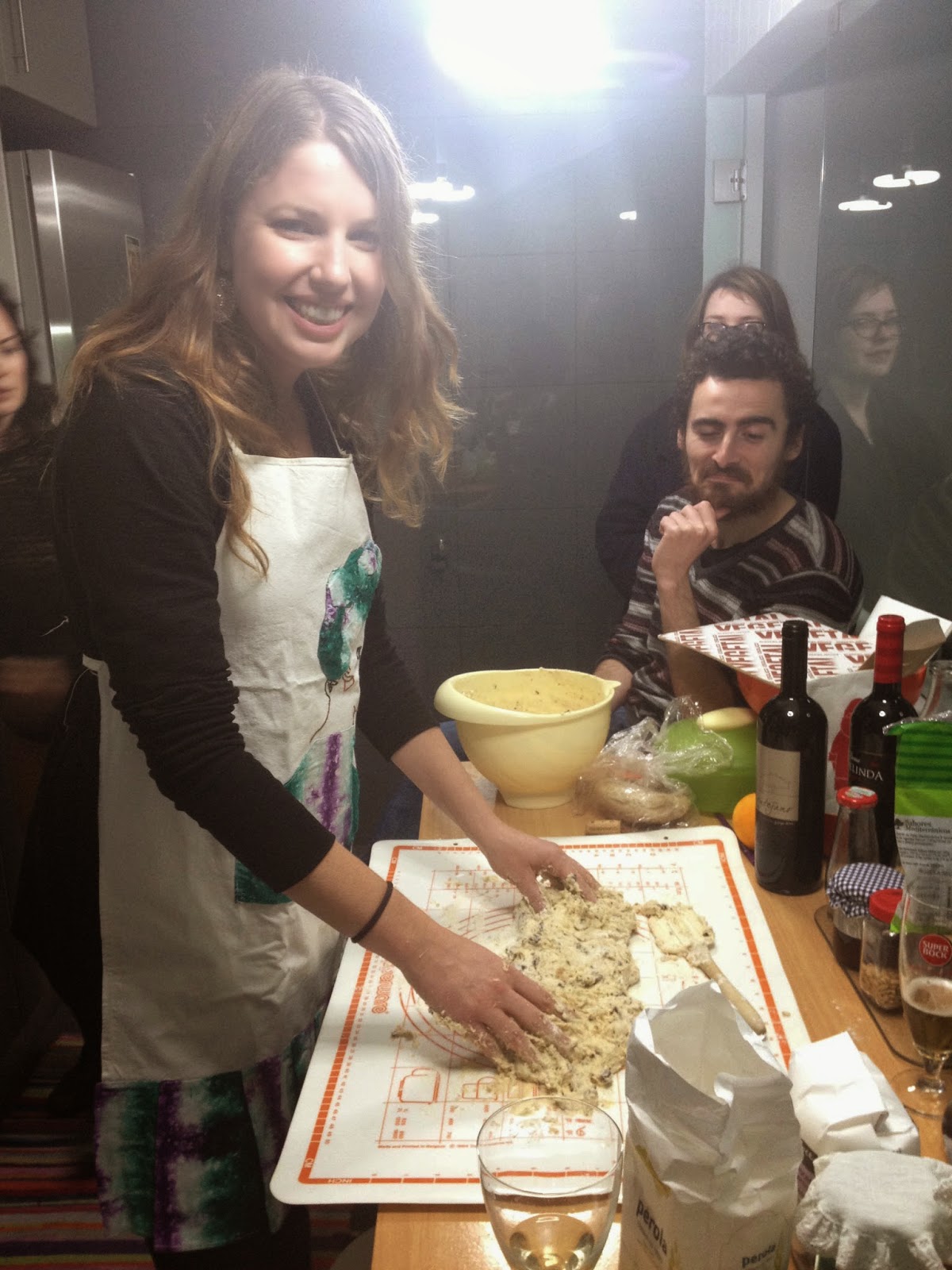 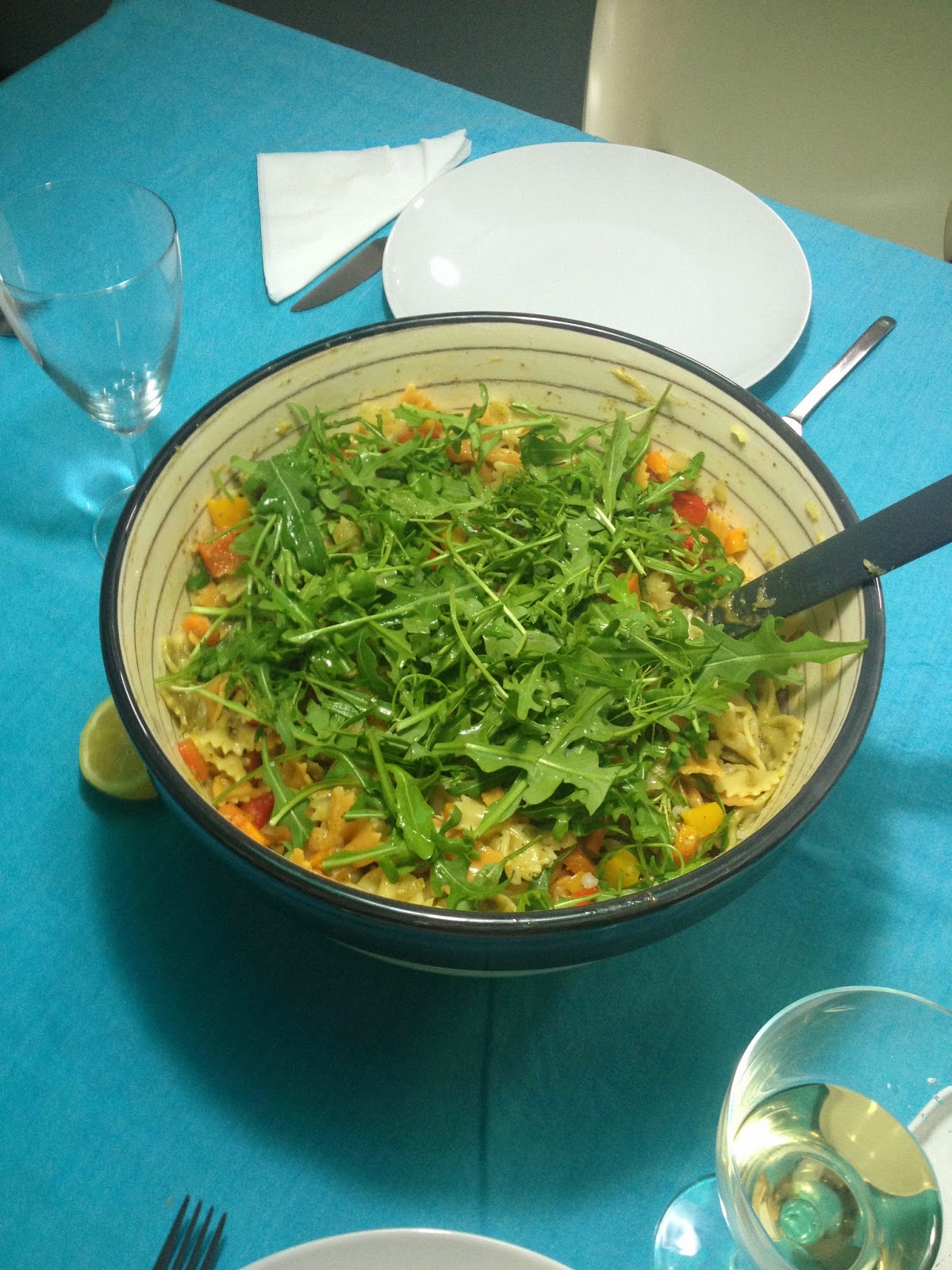 I also want to be sure to share a few of the restaurants we visited in and around Aveiro, as these were treats in and of themselves:

The very first place I visited in Aveiro, and a fitting blend of American and Portuguese culture, Ramona's serves delicious hamburgers piled high with toppings and crisp, perfectly cooked fries covered in sauce that you won't want to miss a drop of.  Perfectly washed down with one of the cold beers on tap.

Another establishment in Aveiro, Pizzarte serves deliciously unique pizzas (and other Italian offerings) in a fantastically modern space, centered around a giant chess set.

I have the owner and chef of O Batel to thank really, for my even venturing back to Portugal.  It was their (now closed) sister restaurant where my mom and I first ventured four years ago and met João.  We returned to order the same exact dish - St. Peter's fish - in honor of my return, starting off the meal with sardines and bread with cheese and marmalade, and accompanying it with a tasty bottle of wine.  The space inside is warmly decorated in wood with small, circular porthole shaped windows, giving the feeling of being below deck in a ship.  The photographs decorating the walls were artfully done, blends of the famous striped houses of nearby Costa Nova and scenes of fishermen and the sea. 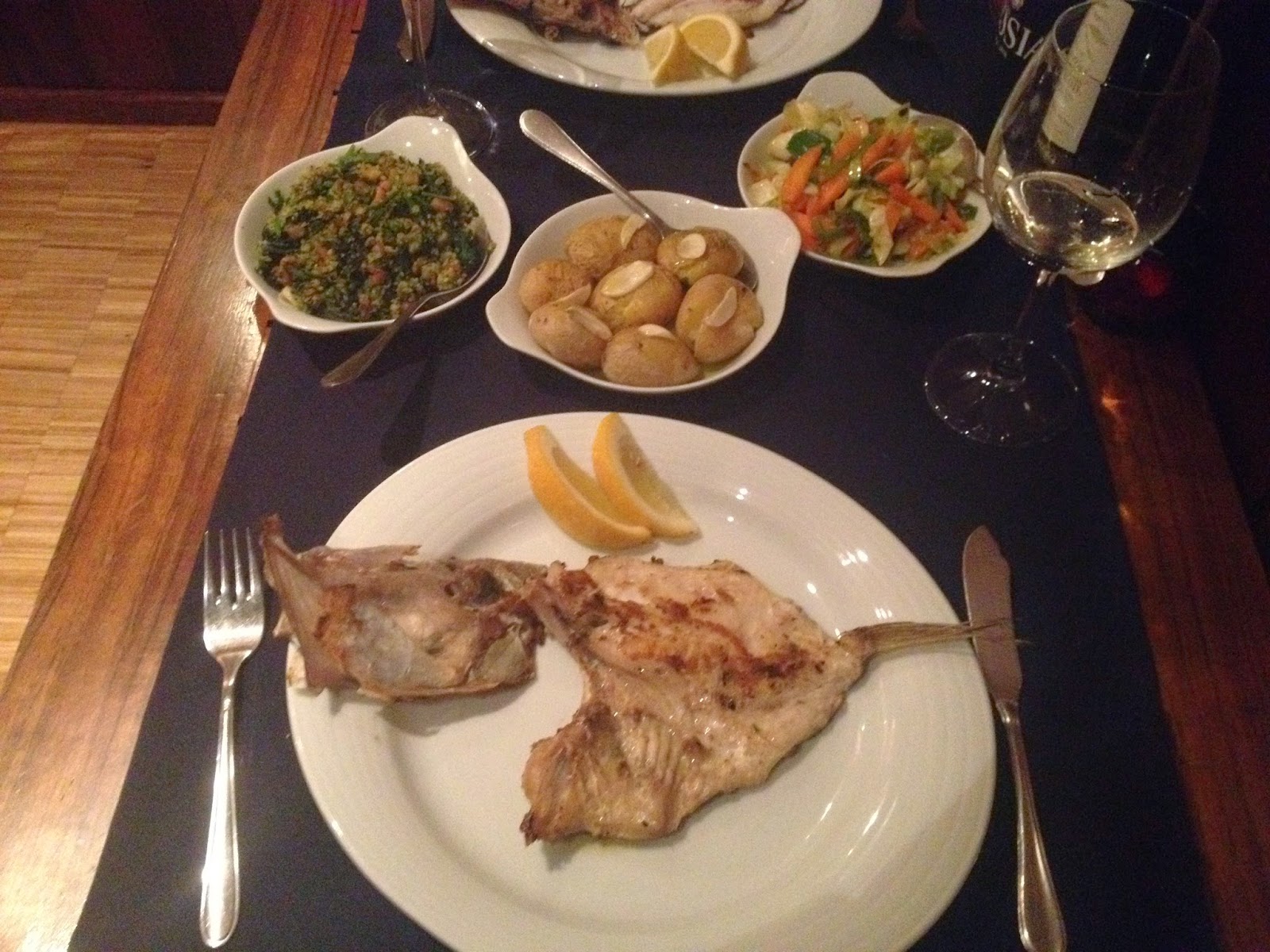 During our first venture to Porto, João's nephew took us out for dinner at an incredible restaurant, with some of the best sushi I've ever tasted.  We had an amazing meal, sampling multiple appetizers, rolls, and plates of sushi, sharing wine and conversation. 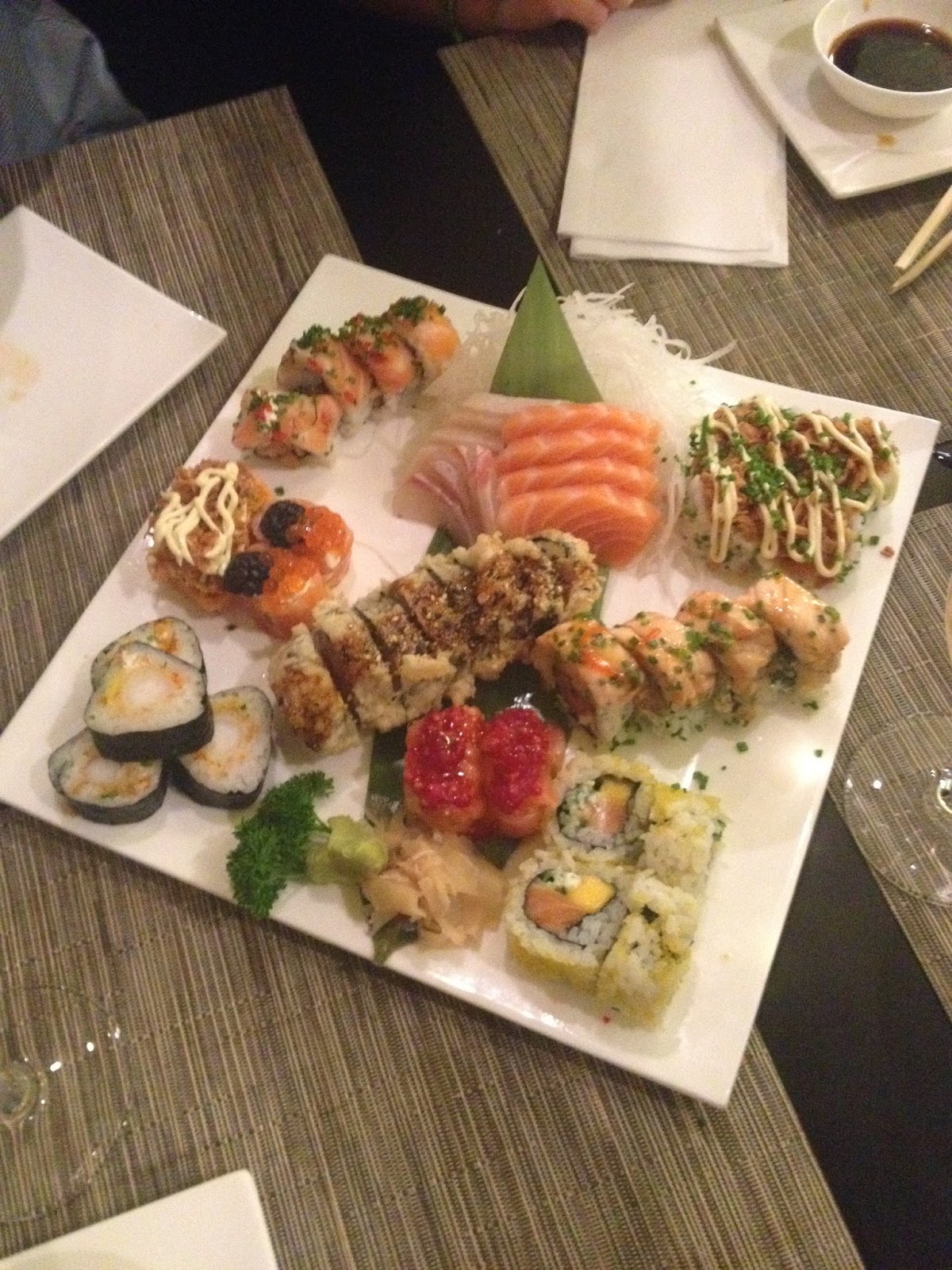 During another visit to Porto, we made a special effort to sample something called a Francesinha (literally:  a little French girl), a monstrosity of a sandwich that's a Portuguese take on a croque monsieur.  It consists of layers of bread, ham, chorizo, and cheese, topped with a fried egg, and nestled in a bed of fries, all of which is covered in a thick tomato-cheesy sauce.  It is a delicious heart attack on a plate, and I could hardly finish half of it.  Probably a better meal for a big night of drinking! 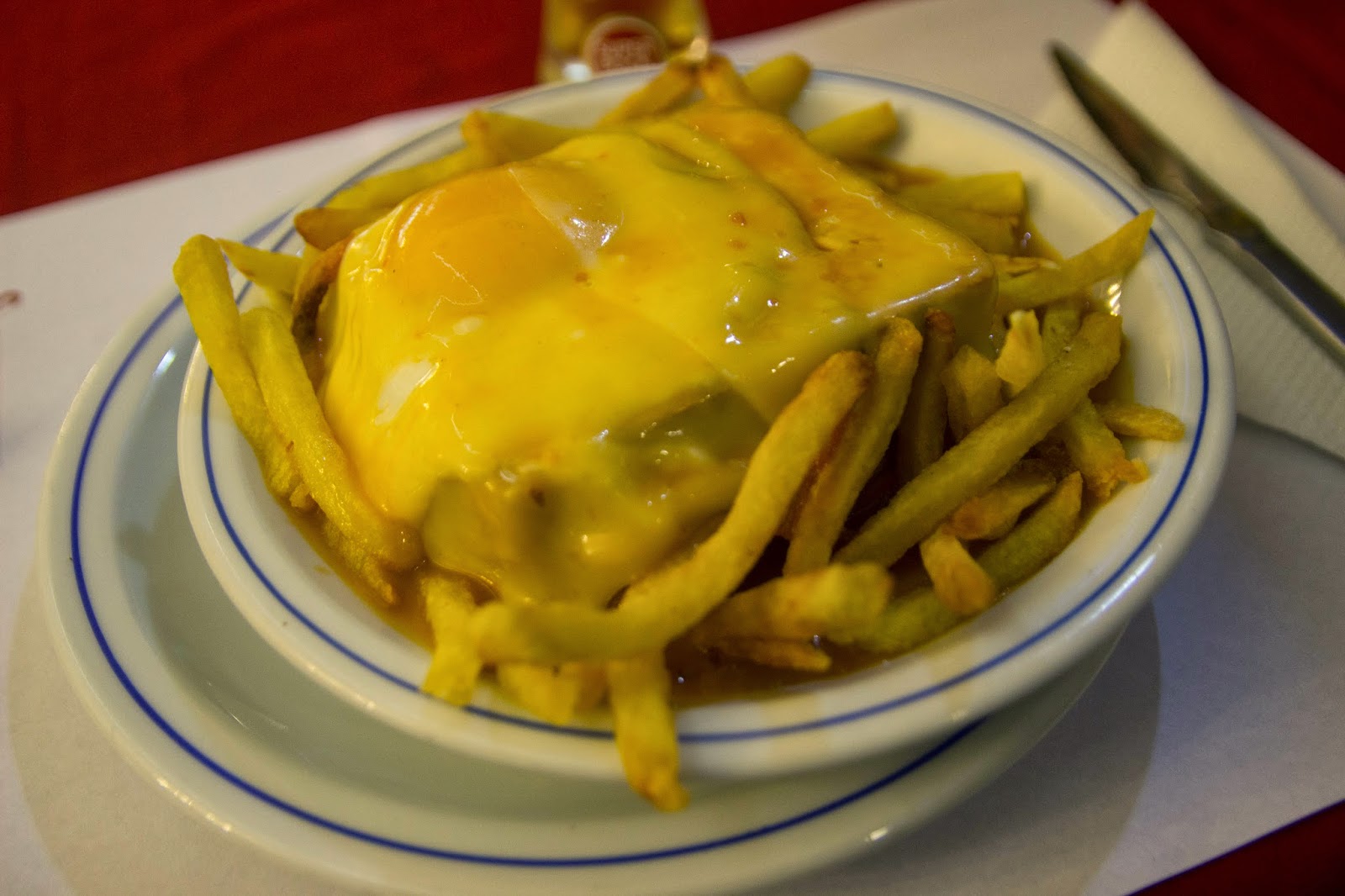 One of my final meals in Aveiro, I wanted to sample eel soup, a typical dish for the region.  We ventured out to a cozy little spot just next to the town cathedral to sample this dish.  Starting off with bread, wine, and a plate of olives, our order of soup was more than enough to split between two people!  The broth is rich and briny, filled with potatoes and chopped up eel - just be careful of the spinal column in the eel, which you'll need to remove from each piece.
This place also had paper table cloths, which we took full advantage of, creating a game of sorts where one of us drew a line or squiggle, and the other had to quickly draw a picture and create a story from it.  It actually turned into a fun little creative exercise! :) 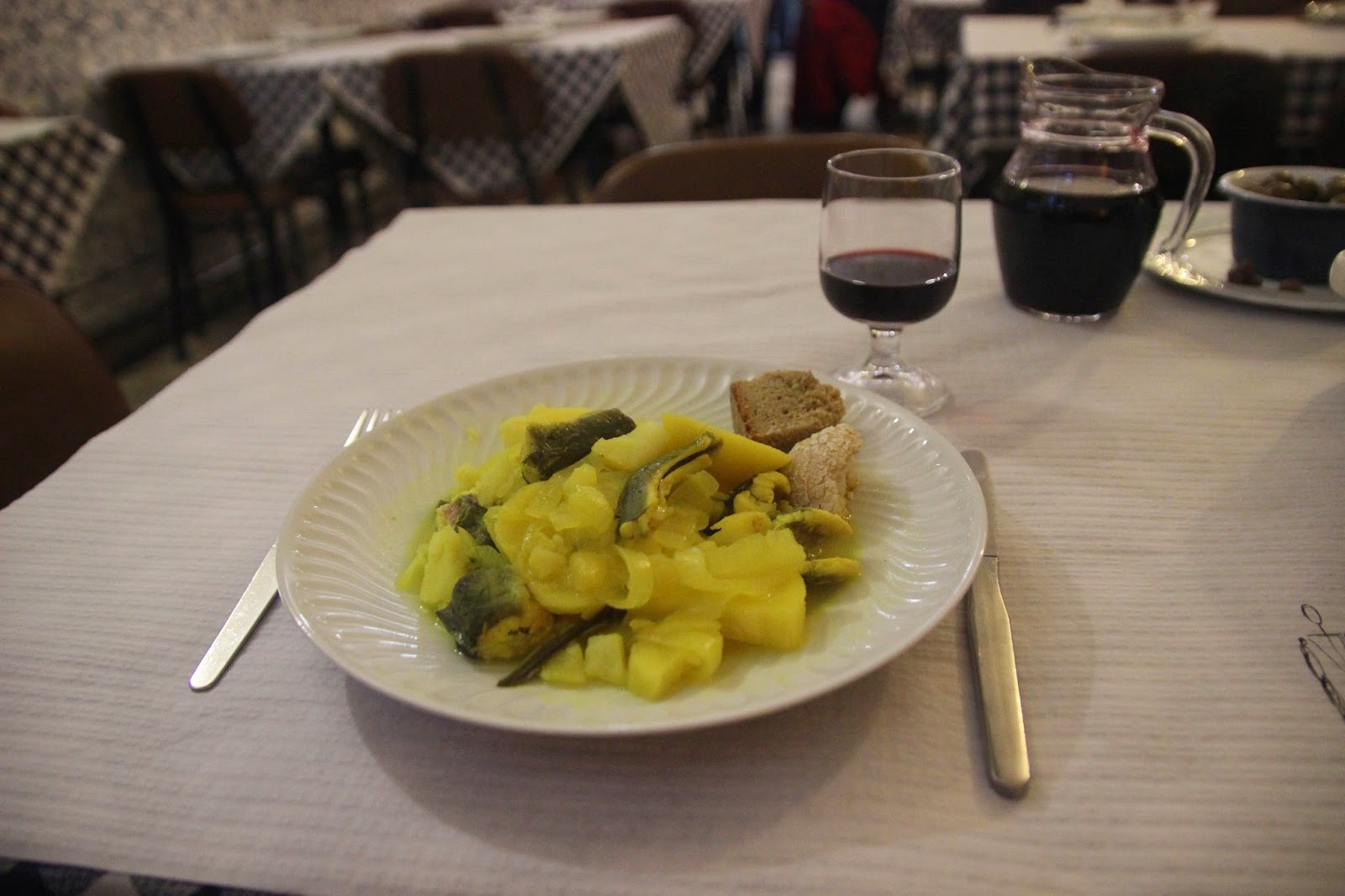 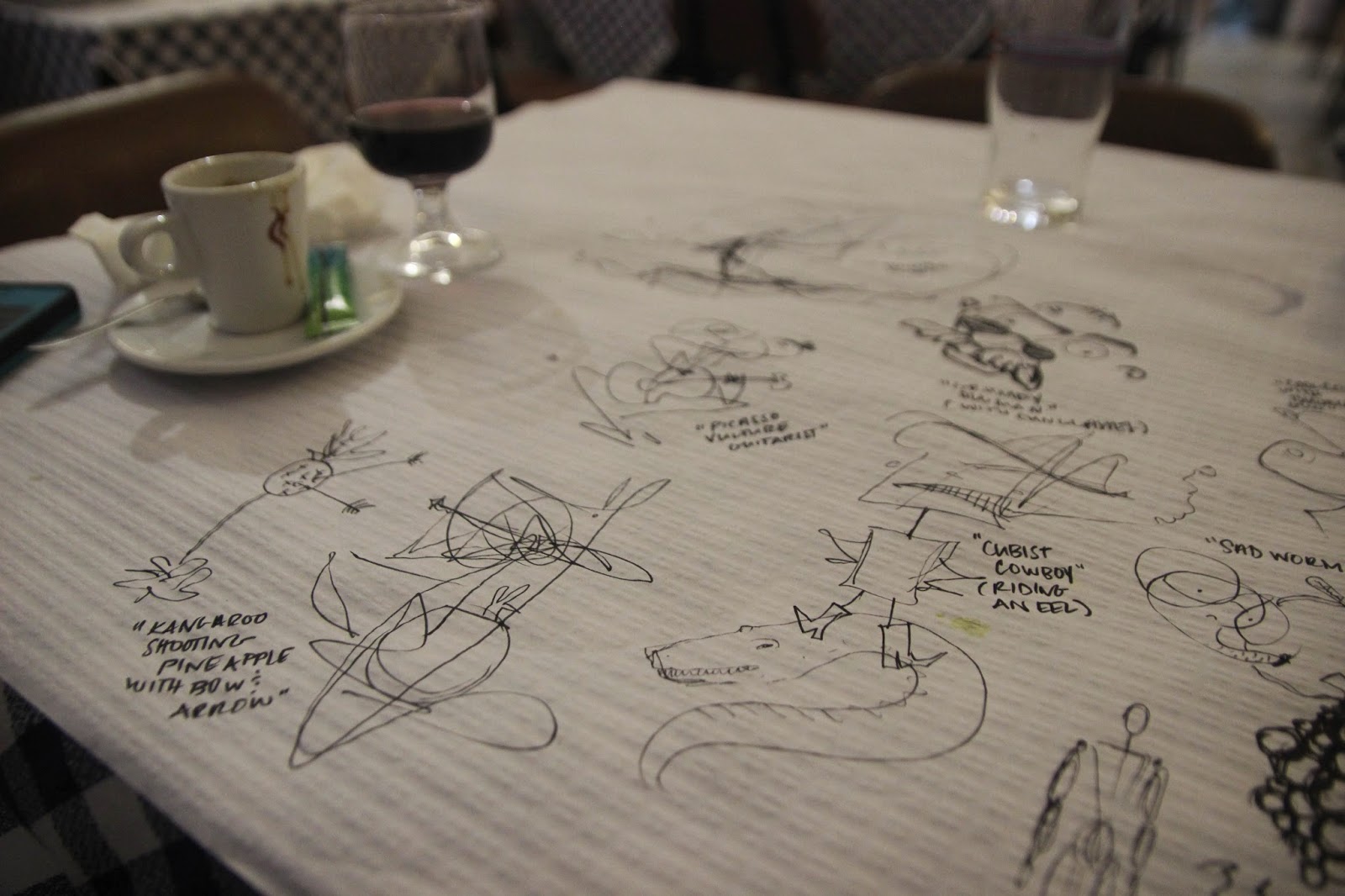 One of my favorite little spots in all of Aveiro, this chocolate shop (known simply as Chocolate) was my daily hangout for enjoying a delicious cup of coffee and getting work done (borrowing the wifi from a nearby hotel).  The desserts and chocolate bites were also incredible, my favorite splurge being the tiny dark chocolates dusted in cinnamon (canela) from the shop's glowing display.

And finally - stepping into the Majestic Cafe in Porto was like stepping back in time.  Established in 1923 at the entrance to the Rua de Santa Catarina, it lends a luxurious atmosphere, furnished with mirrored walls and ornate decor, complete with a pianist softly filling the air with music.  We splurged on a quick stop here for delicious coffee and simple but decadent scones during our final visit to Porto. 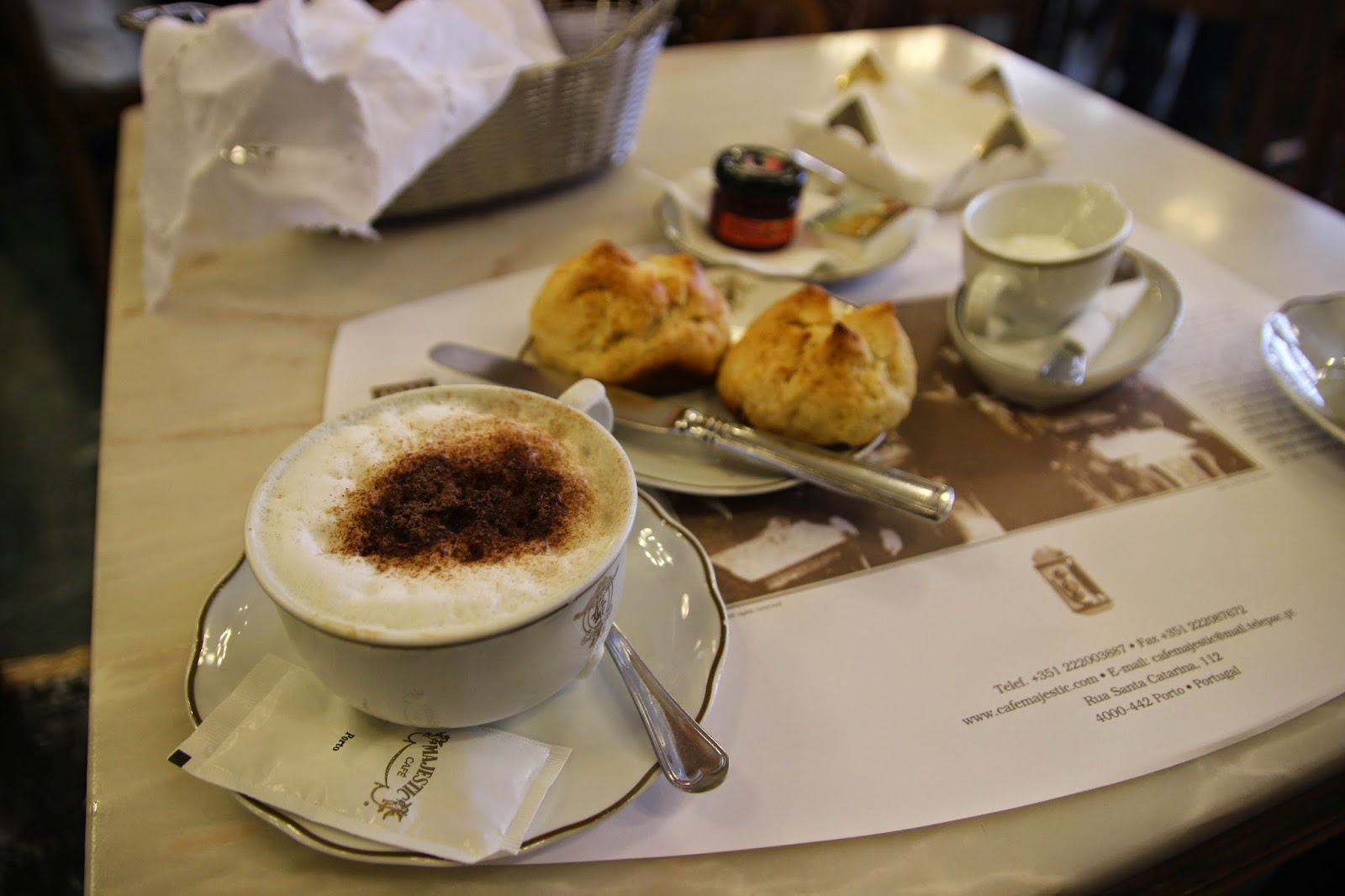 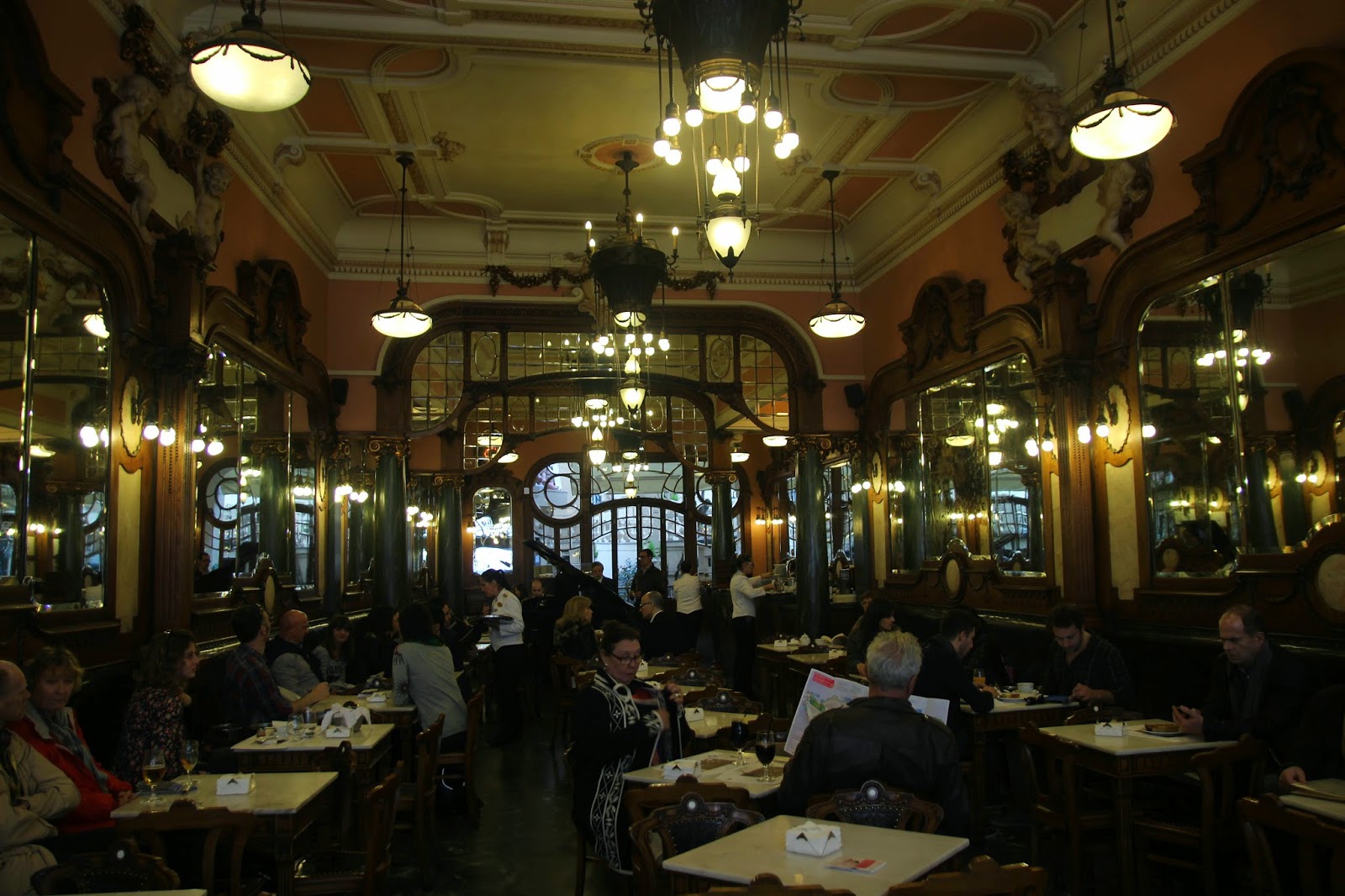 Posted by Outlander Abroad at 1:02 AM