A Brief Interlude at Inle Lake

Inle Lake was a wonderful place to rest and relax after three days of trekking, and I took full advantage of that by doing what I always do, finding a nice little cafe that serves excellent coffee and tasty food, and perching there for many hours over the next couple of days to decompress and catch up things.  For me, this was a spot called 'The French Touch', and though it was a bit more expensive and a bit more Westernized than other places in Myanmar, it was a great spot to escape and recover for a bit.

Jimmy and I did manage to get back on the lake for a boat tour, the primary activity in Inle.  We connected with another pair from San Francisco and booked a trip, doing as much as we could to insist on a path that would reduce the shopping stops as much as possible and stick as much as we could to seeing the lake itself - the gardens, the fishermen, and the sunset.

Though it perhaps wasn't as magical as that first glimpse the previous day, the lake was still magnificent.  We cruised out to the wider part of the lake, coming up to a fisherman who was obviously posing for us (though still impressive), and many more off in the distance, casting their nets, gently swirling their paddles through the water with a single leg wrapped around the oar.  As the sun continued to get lower, their silhouettes filled the scene, nets glittering as they sailed through the air into the water. 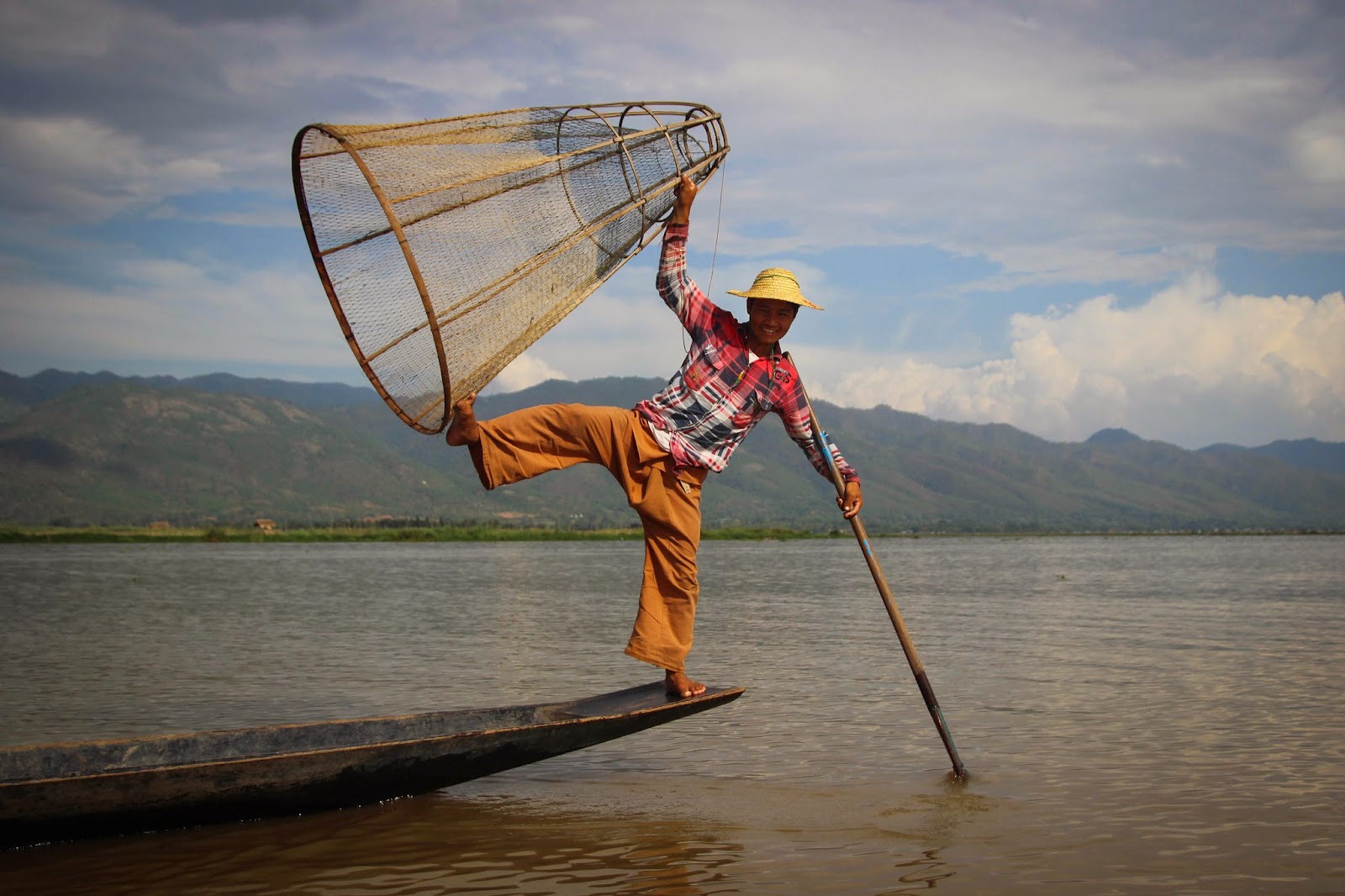 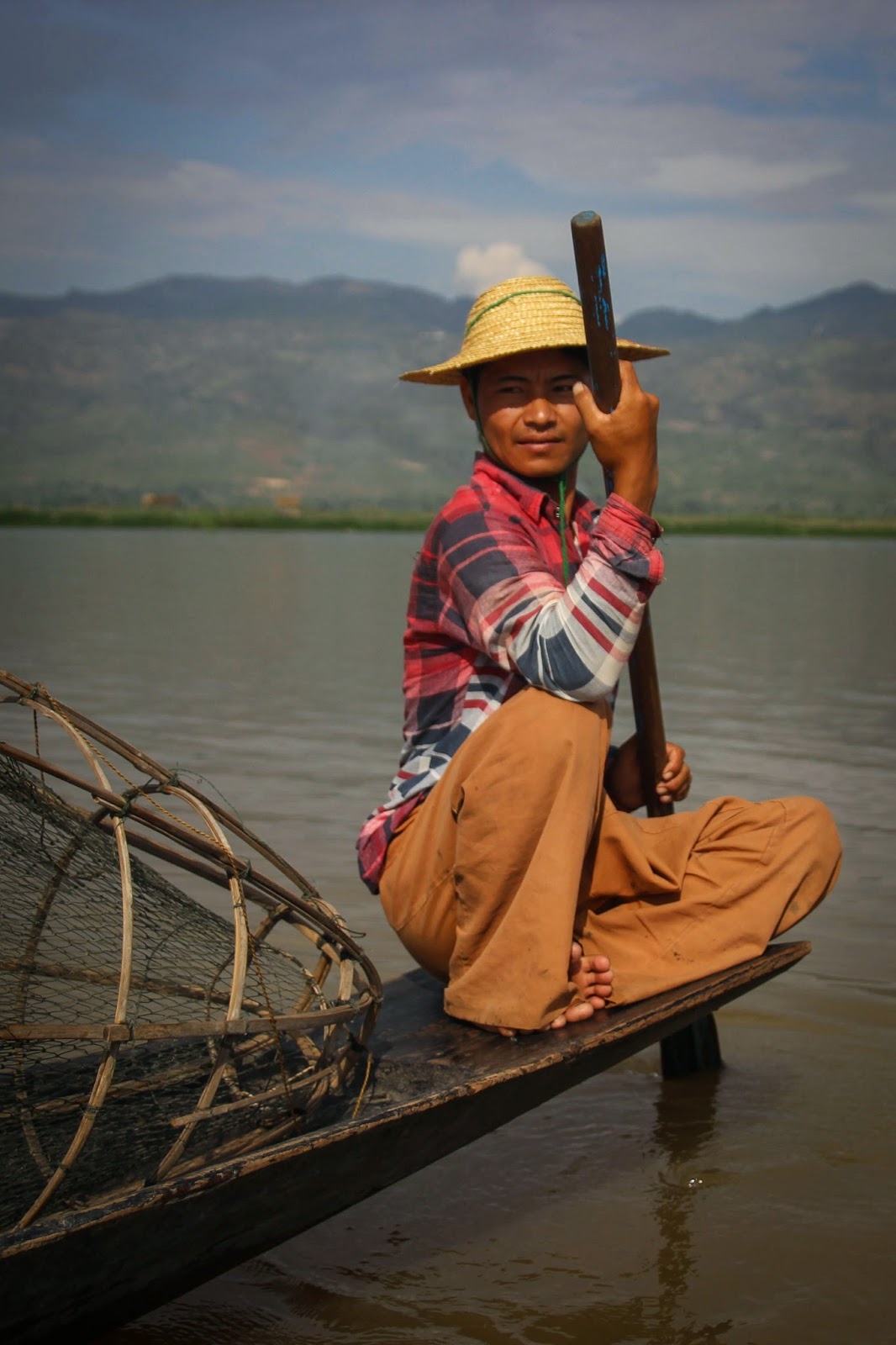 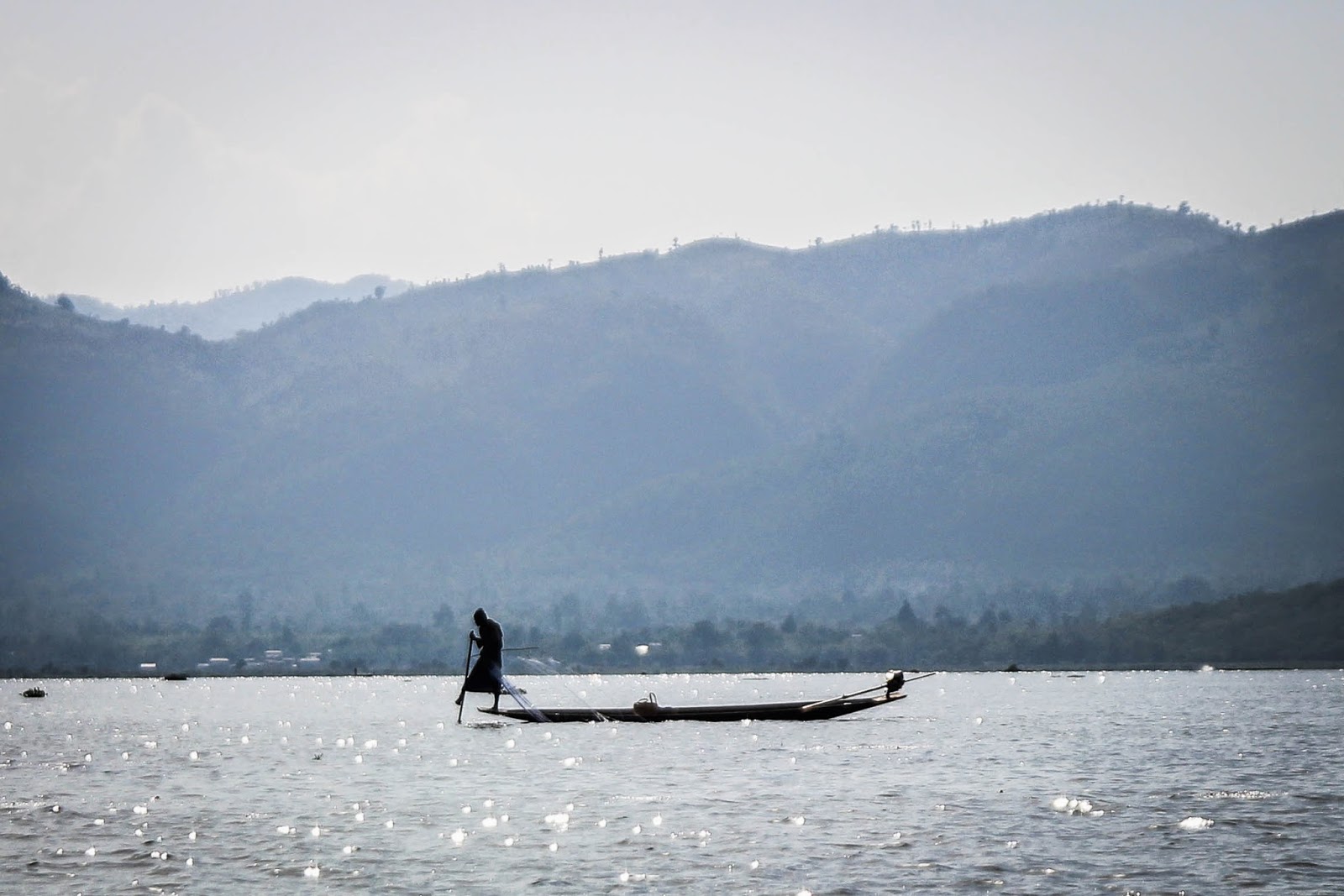 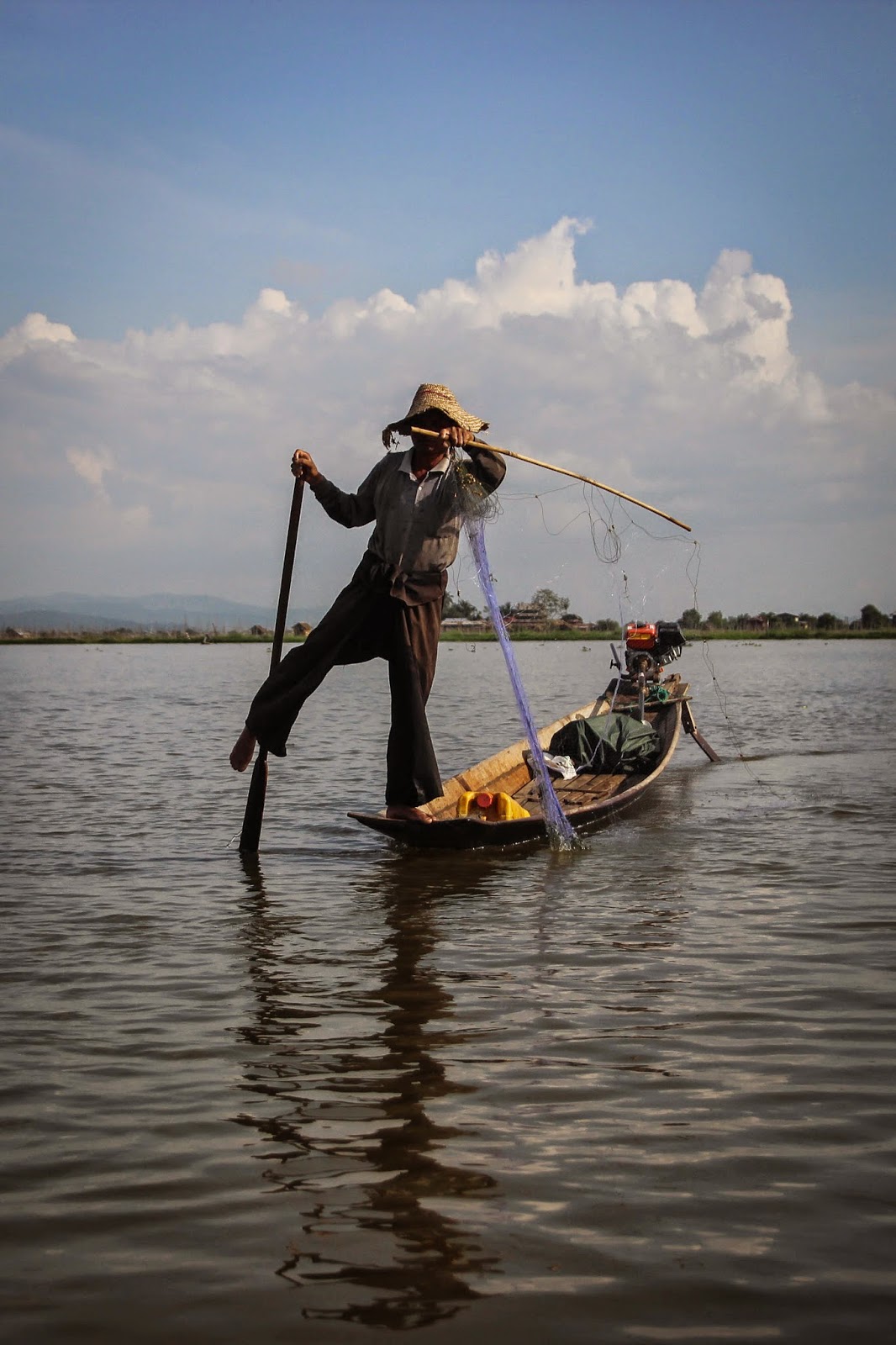 We continued over to a narrow section of water, stopping at a handicraft store just across from a platform full of gold and white pagodas.  We browsed the items, though none of us had any real interest in buying.  And despite our initial discomfort at the longneck ladies who had put themselves on display, waiting in full garb for their photos to be taken by tourists, we did get a couple of portraits. 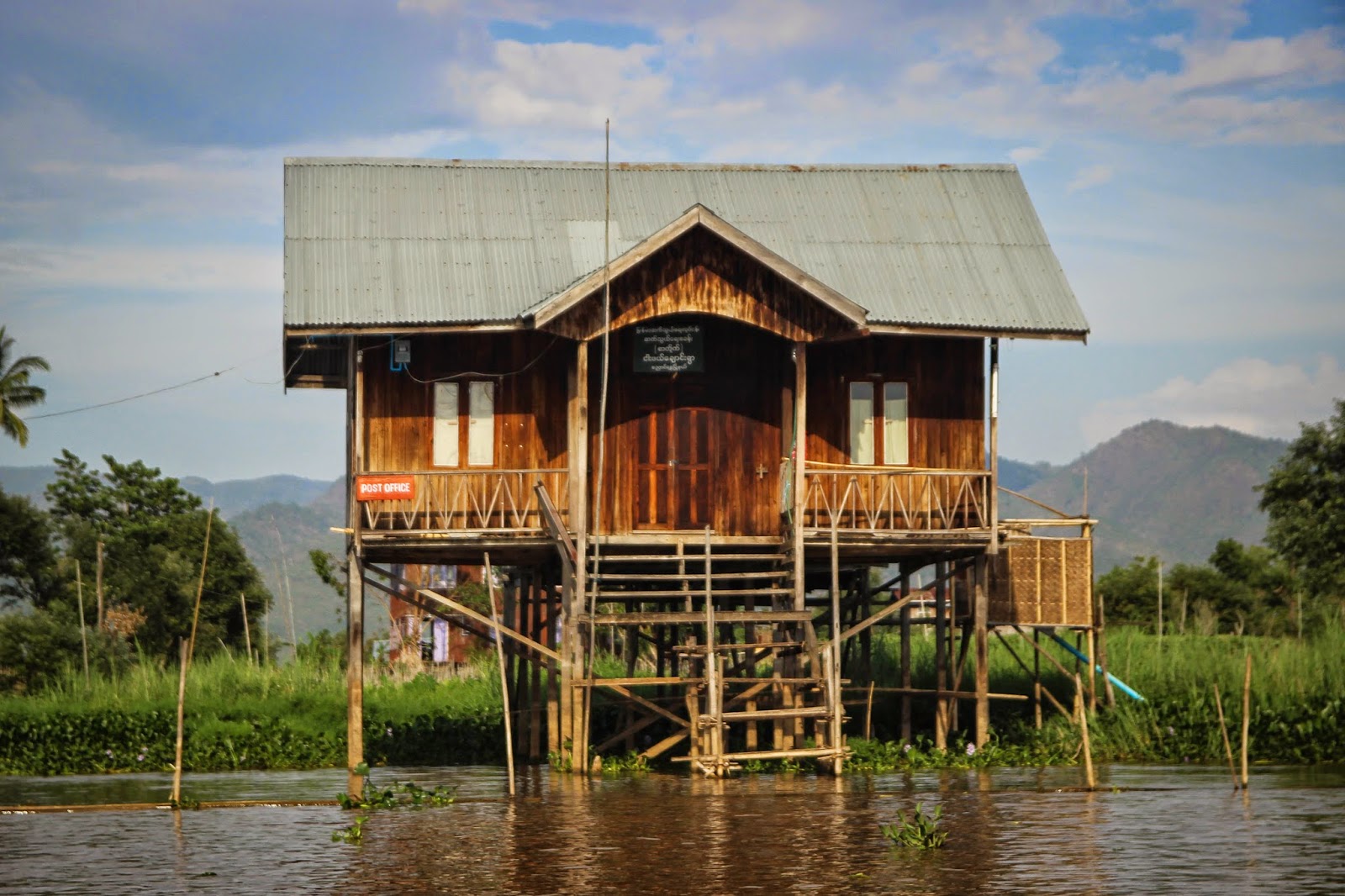 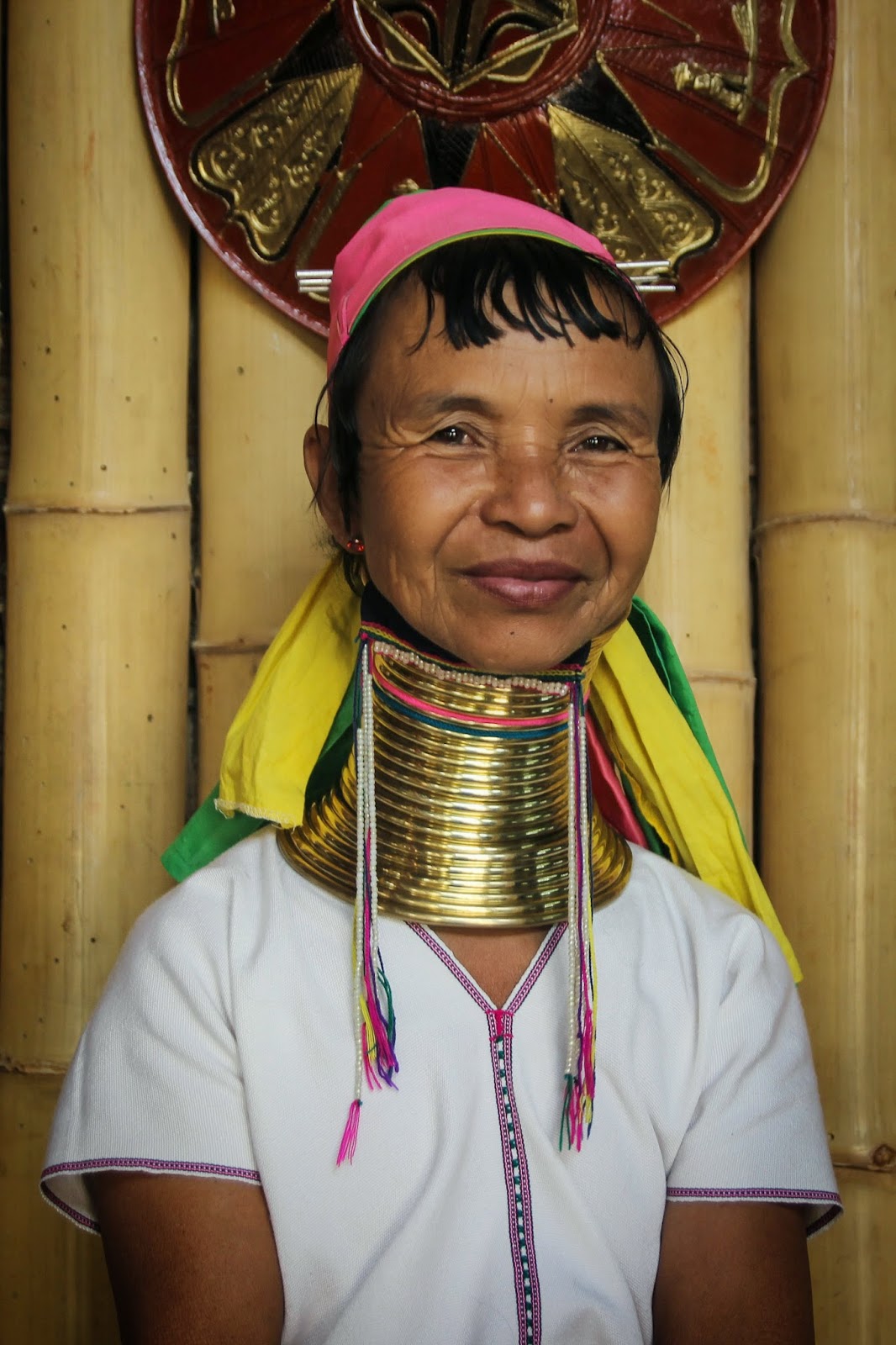 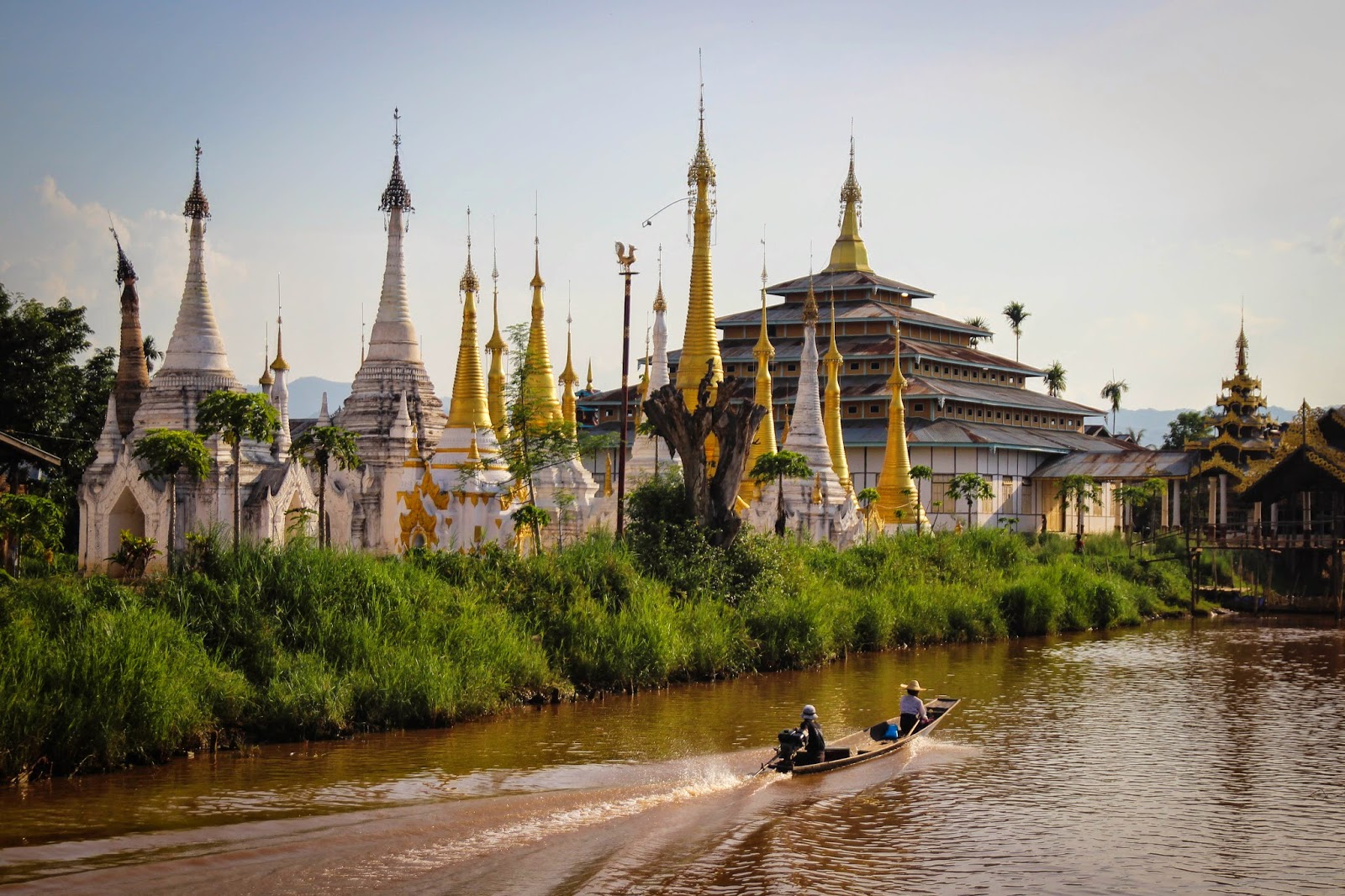 Back on the lake, we approached another large temple, Phaung-Daw-Oo Kyaung Taik, and convinced our driver to pull over for us to get a closer look.  We explored the exterior of the red and gold building, and I ventured across a small bridge to see a small ship similar to the royal barge replica in Yangon, but much smaller, set inside a sort of garage-like cage. 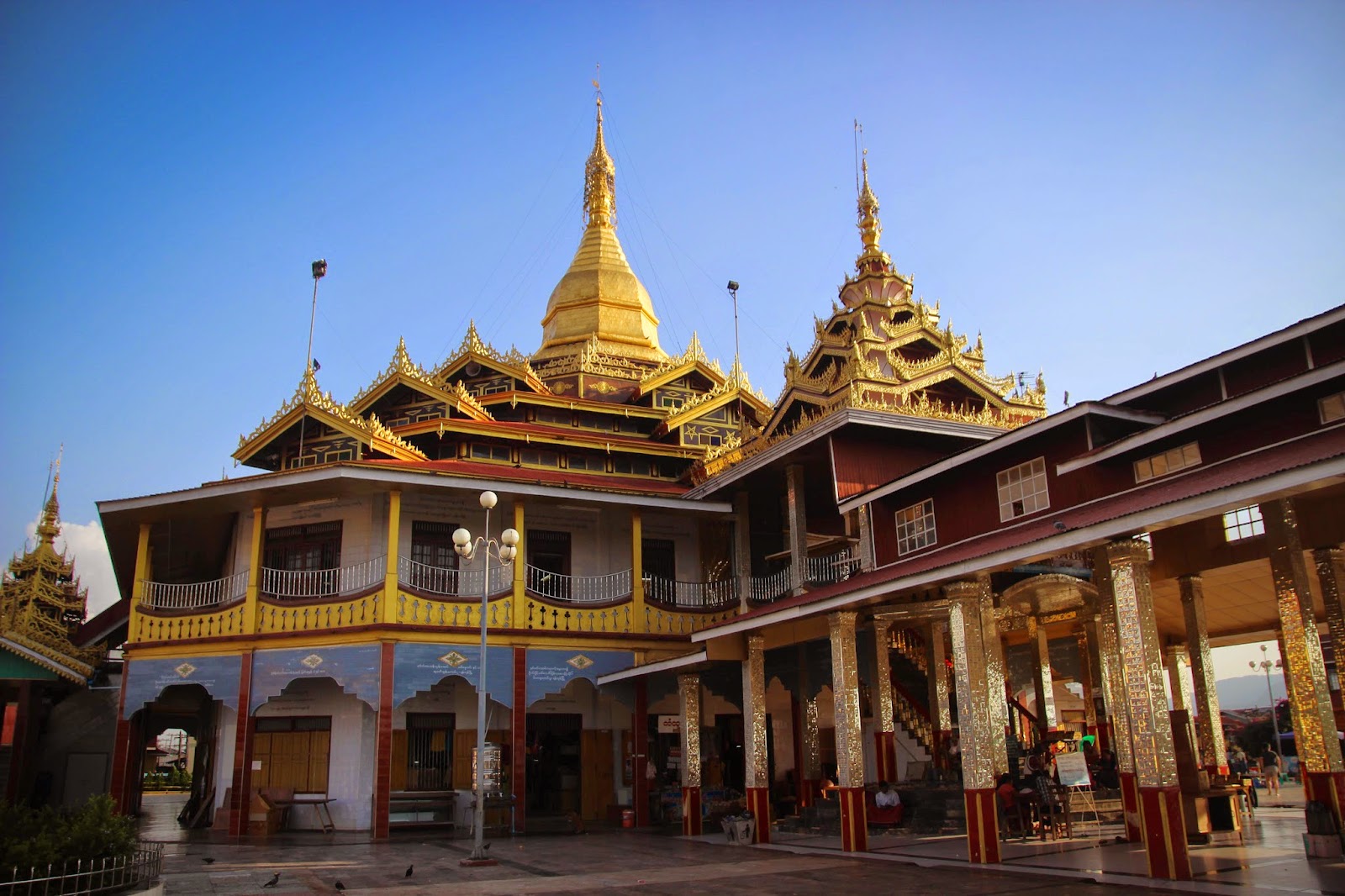 Our final stop of the day was a shop where they made the actual longboats like the one we were in, as well as the smaller boats used by fishermen.  Inside, they also made cheroots - something between a cigar and a cigarette, it's made of tobacco and flavorings rolled tightly into a leaf.  It was admittedly impressive to see how quickly they could go through the whole process of stuffing, rolling, and sealing them, though I had no interest in buying! 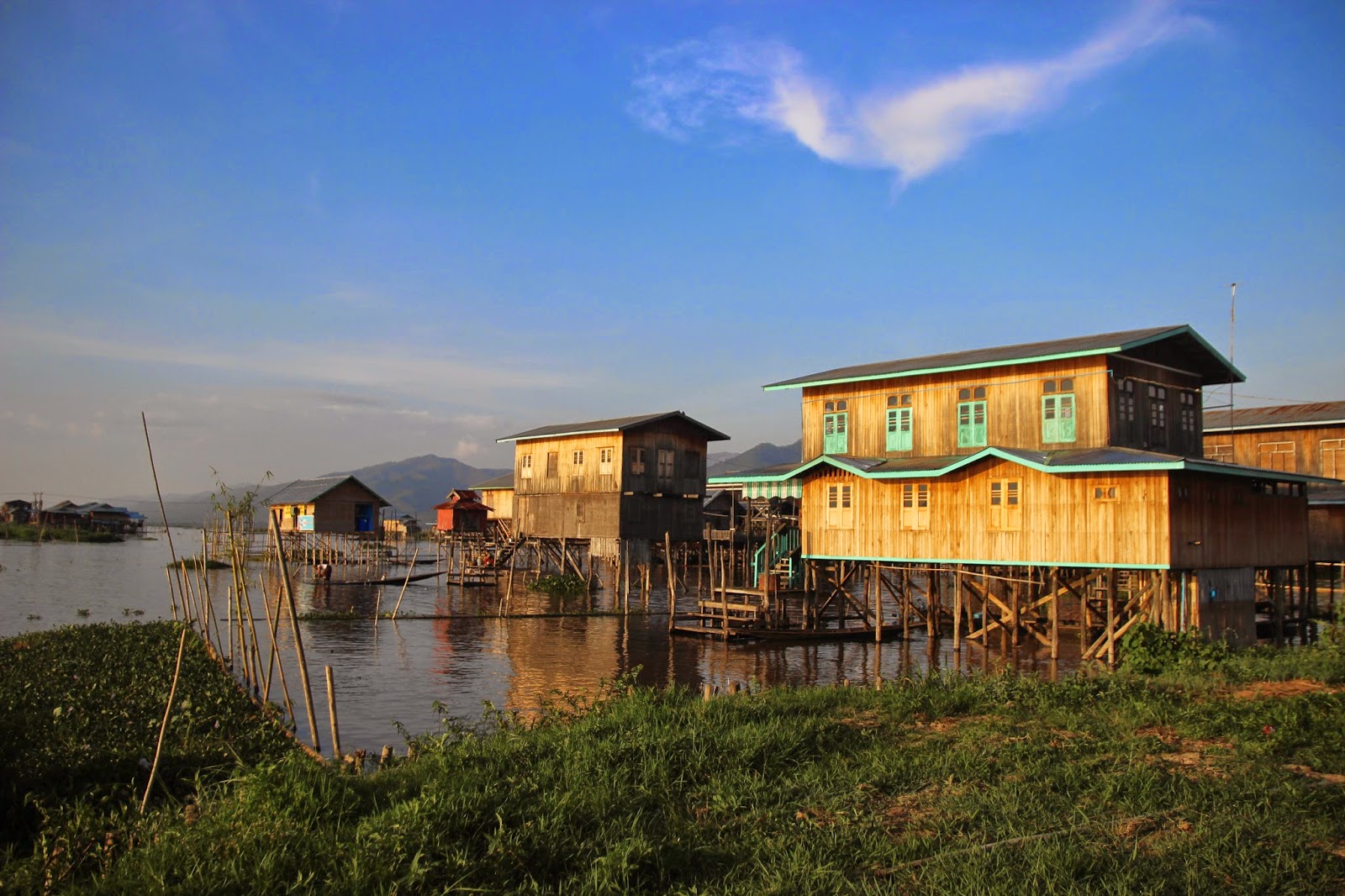 We quickly made our way back to the boat, heading back towards the hotel to catch the sunset along the way (as the ride would take us nearly an hour).  We cruised slowly past the floating gardens, an interesting configuration of cages where plants were growing - tomato, eggplant, etc.  We continued back, watching the sun slowly dip behind the mountains, casting the sky in a bright pink and orange glow.  On the opposite side of the lake, a full moon slowly rose above a cluster of whispy clouds.  It slowly grew darker, and by the time we made it back to the dock (after sputtering to a stop once along the way), it was fully dark.  We dropped off our things at the hotel, then returned to Inle Palace for dinner, the same spot we had eaten at with our trekking crew, devouring delicious plates of fried whole fish. 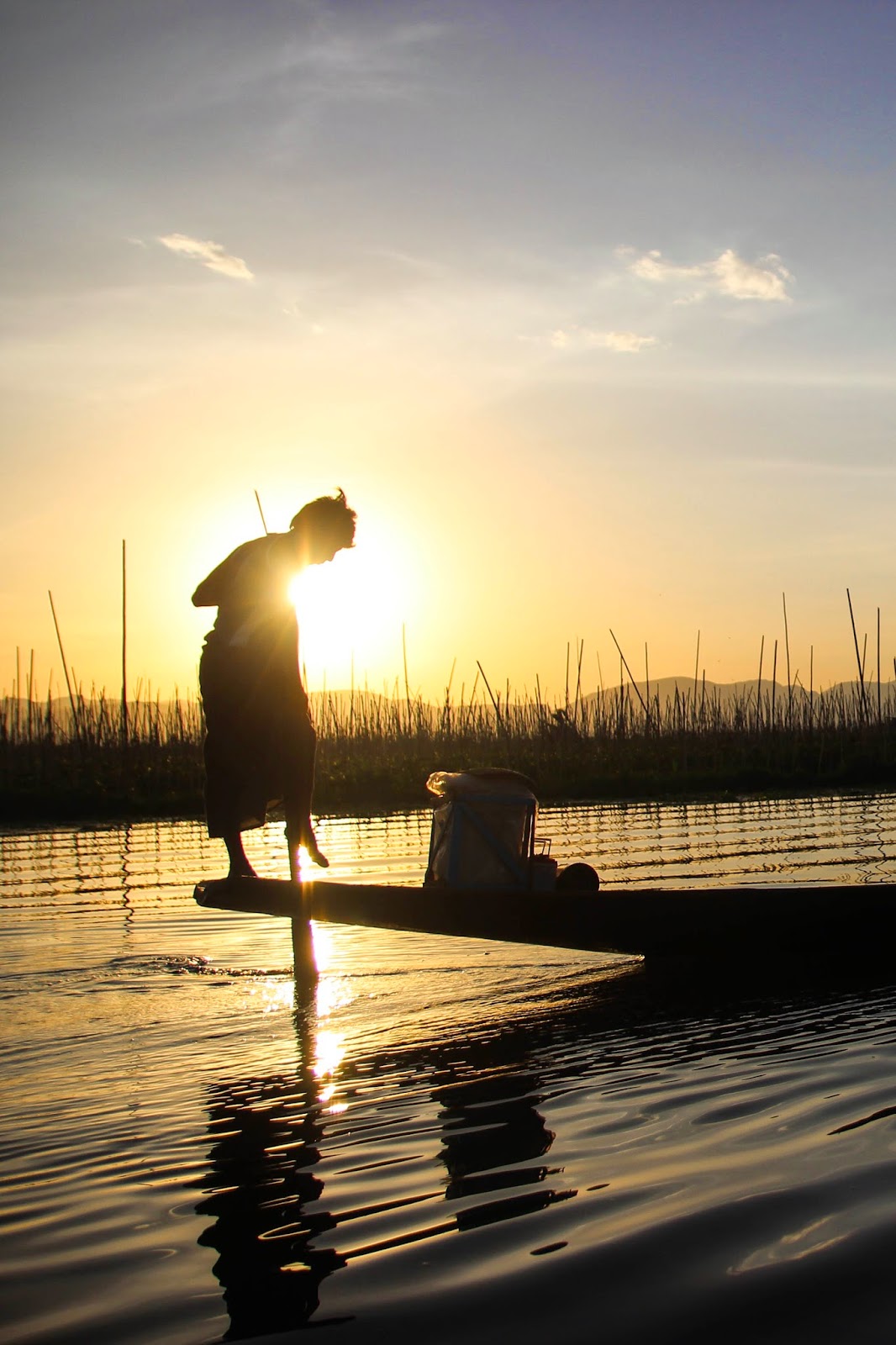 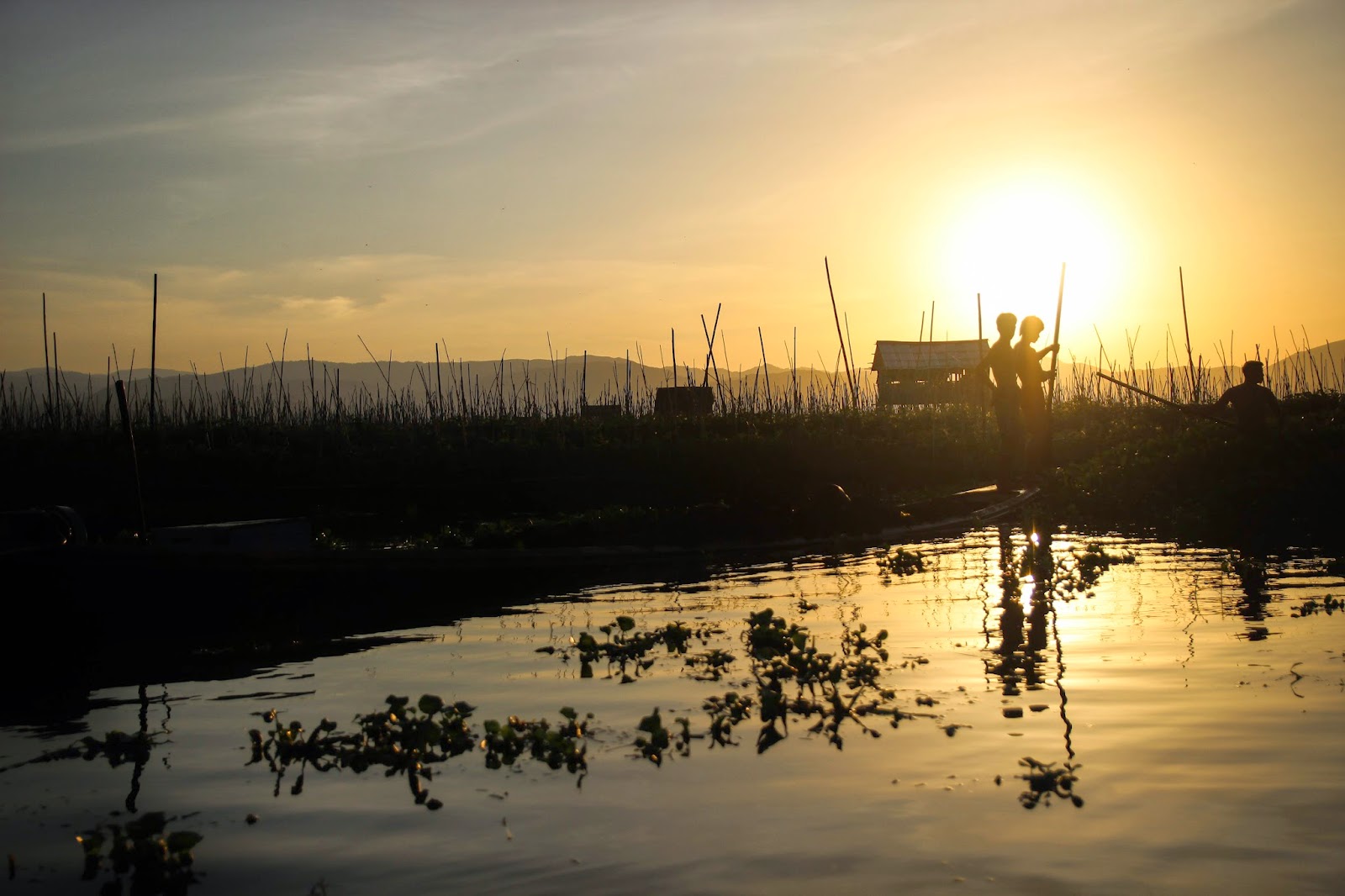 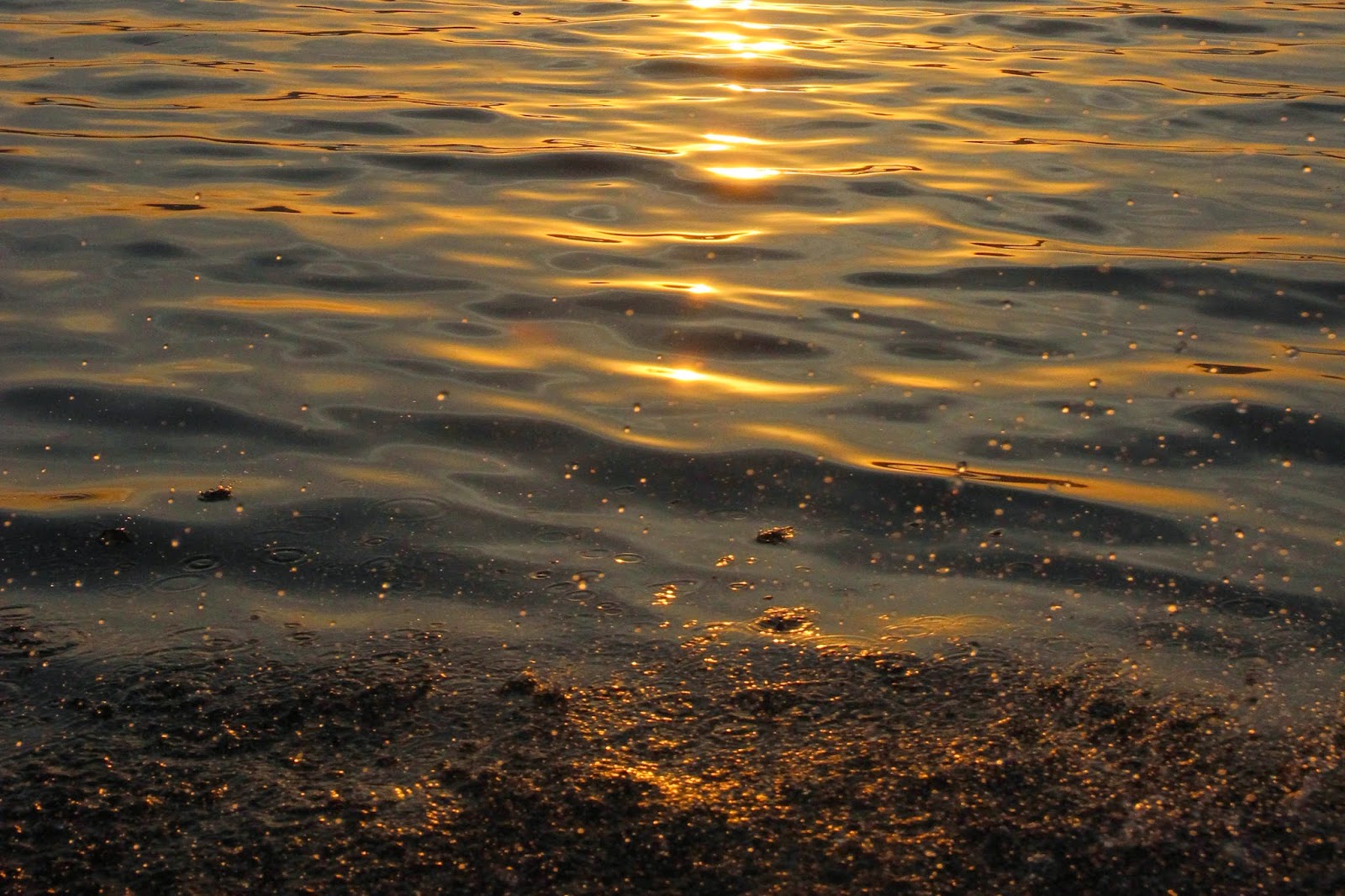 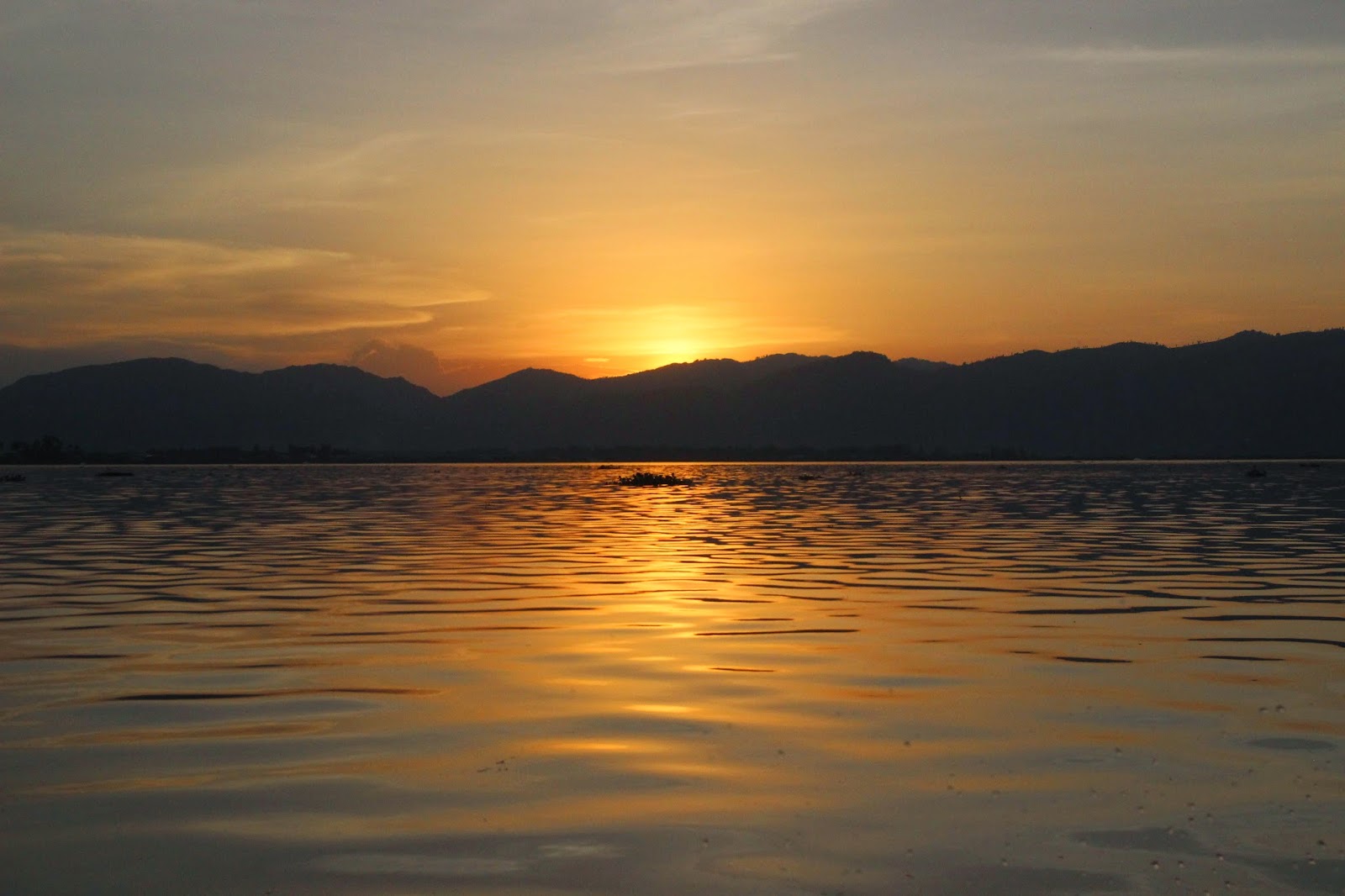 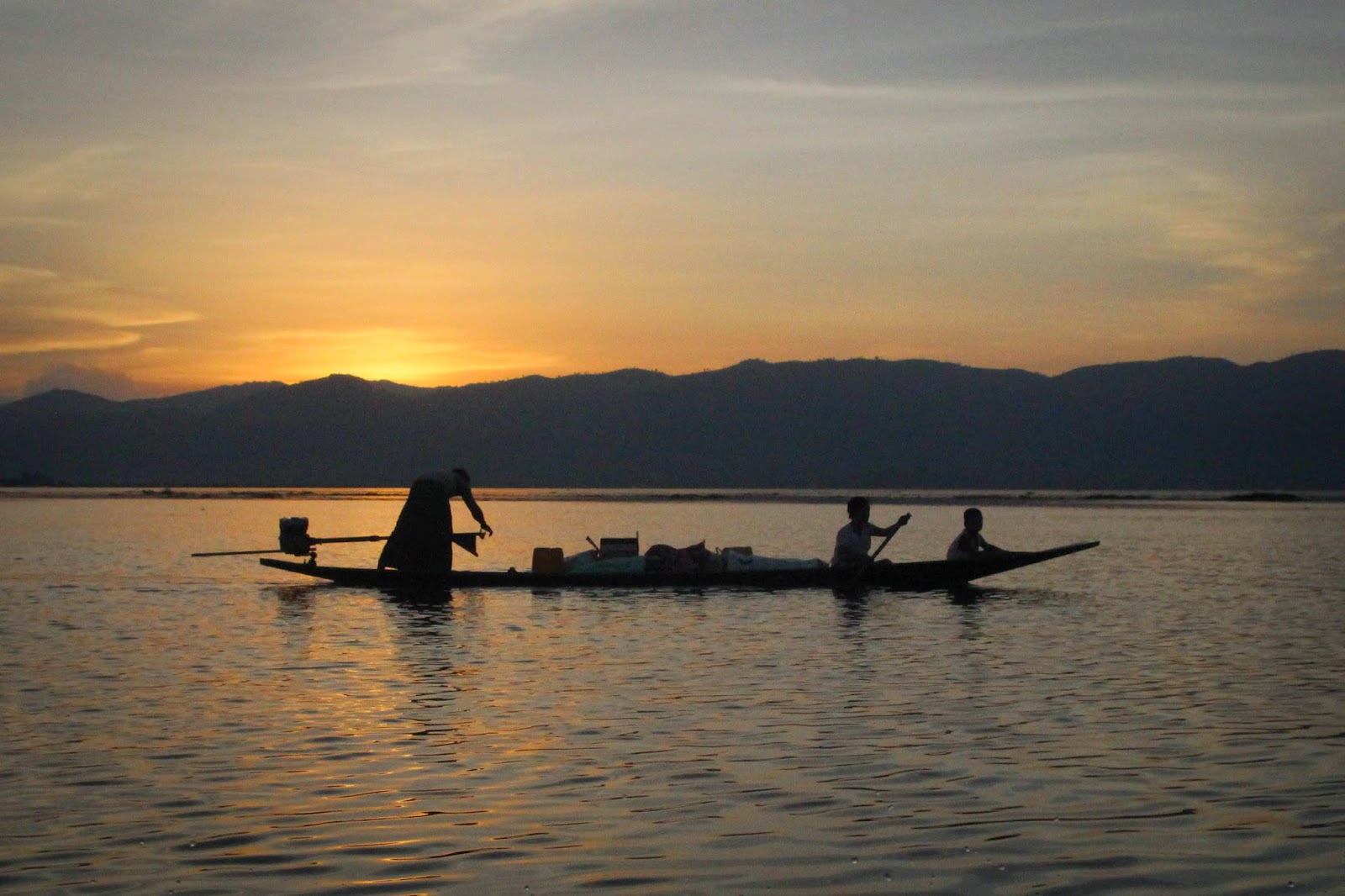 After a few days of relaxing and exploring, we took a long, eight hour bus ride to Bagan, an incredible city known for the thousands and thousands of temples that fill the landscape, any photographer's dream...
Posted by Outlander Abroad at 12:55 AM