Visiting the Golden Rock and More Adventures in Transportation

Admittedly, sometimes I get ideas in my head about the places I want to see after perusing various travel agency websites.  One of the images that had stuck out in my head was that of a giant golden boulder, clinging to the side of a cliff, with monks gathered around it, delicately laying their hands on the rock.  It was this image that made me want to see the Golden Rock for myself.  Supposedly held onto the side of the mountain by a strand of Buddha's hair, it's a highly sacred site for Buddhist followers, and, while a big tourist destination for Burmese, it doesn't seem to be so well traveled by outsiders.

Jimmy and I booked a bus to the nearest town, Kinpun, from where we would be able to travel up to see the Golden Rock.  Having heard that the buses with air conditioning can get frigid, and having been told that this bus had air conditioning, I dressed accordingly in long pants, with a long sleeved merino wrap in my bag.  Unfortunately, it was anything but cold on the bus.  Somewhat tolerable when we departed Yangon, the air became stifling once we started picking up dozens of passengers beyond the bus's capacity, first seating people on tiny plastic stools in the aisle, then cramming them into the front, standing room only.  Having been given the very front row, and having taken the aisle seat, I was subjected to multiple armpits directly overhead, leaving me overheated and claustrophobic for the last few hours of the ride, trying to distract myself as much as possible with my Kindle.

After arriving in Kinpun, Jimmy and I found a somewhat decent room, and after deciding to visit the rock the following morning, we wandered through the town.  Or, what there was of the town, which was mostly one major road with a few restaurants, handicraft stores, and various other vendors, mostly targeting the local tourists.  We settled into a restaurant, where we ordered two plates of a delicious (albeit too spicy for me) "chicken salad", consisting of shredded chicken and cucumber coated in a spicy sauce, served with rice, chilis, and fresh, peppery herbs, which were to be mixed together.  Even without the chilis, I had to surrender my bowl to Jimmy after eating as much as I could tolerate! 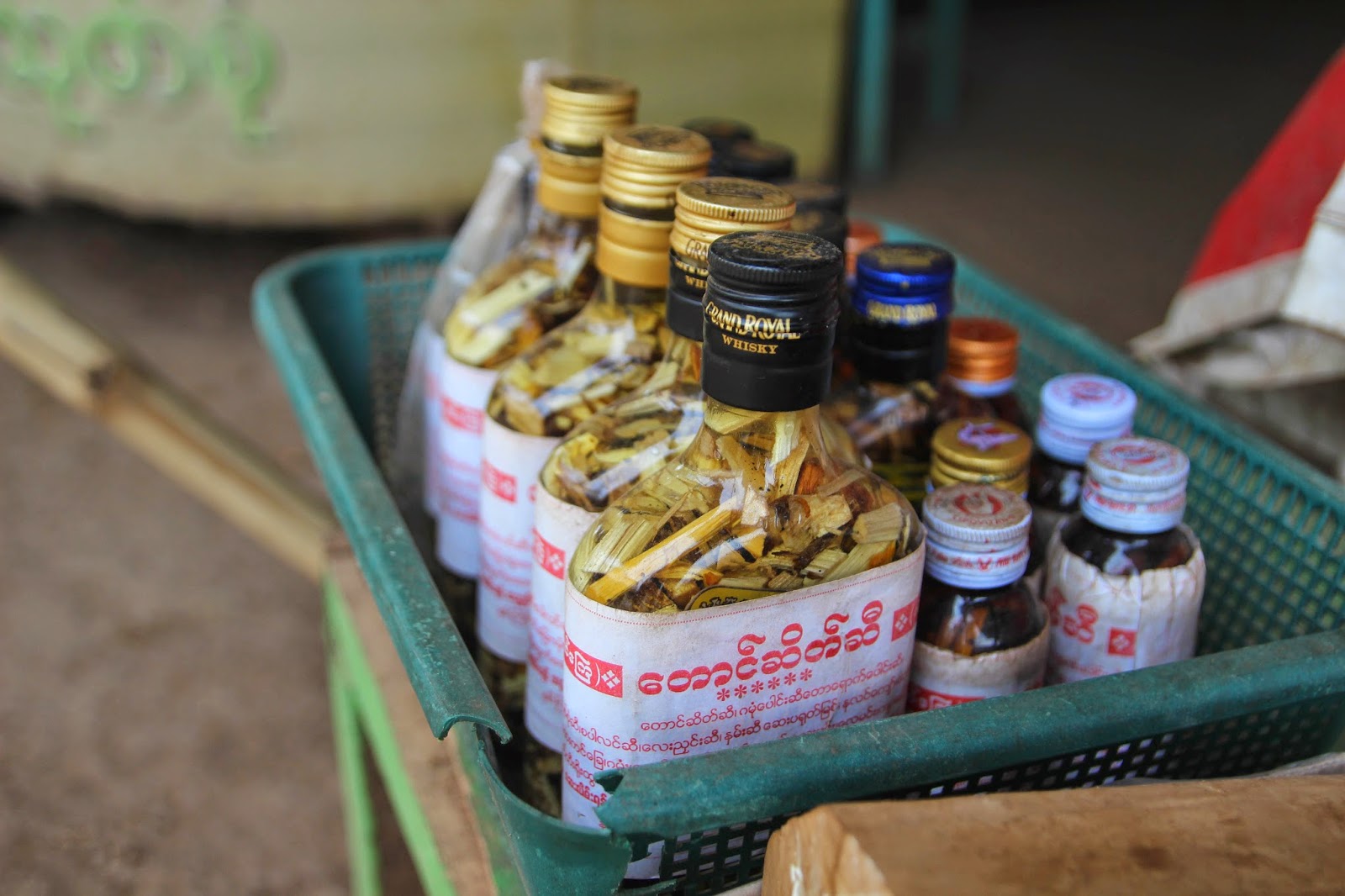 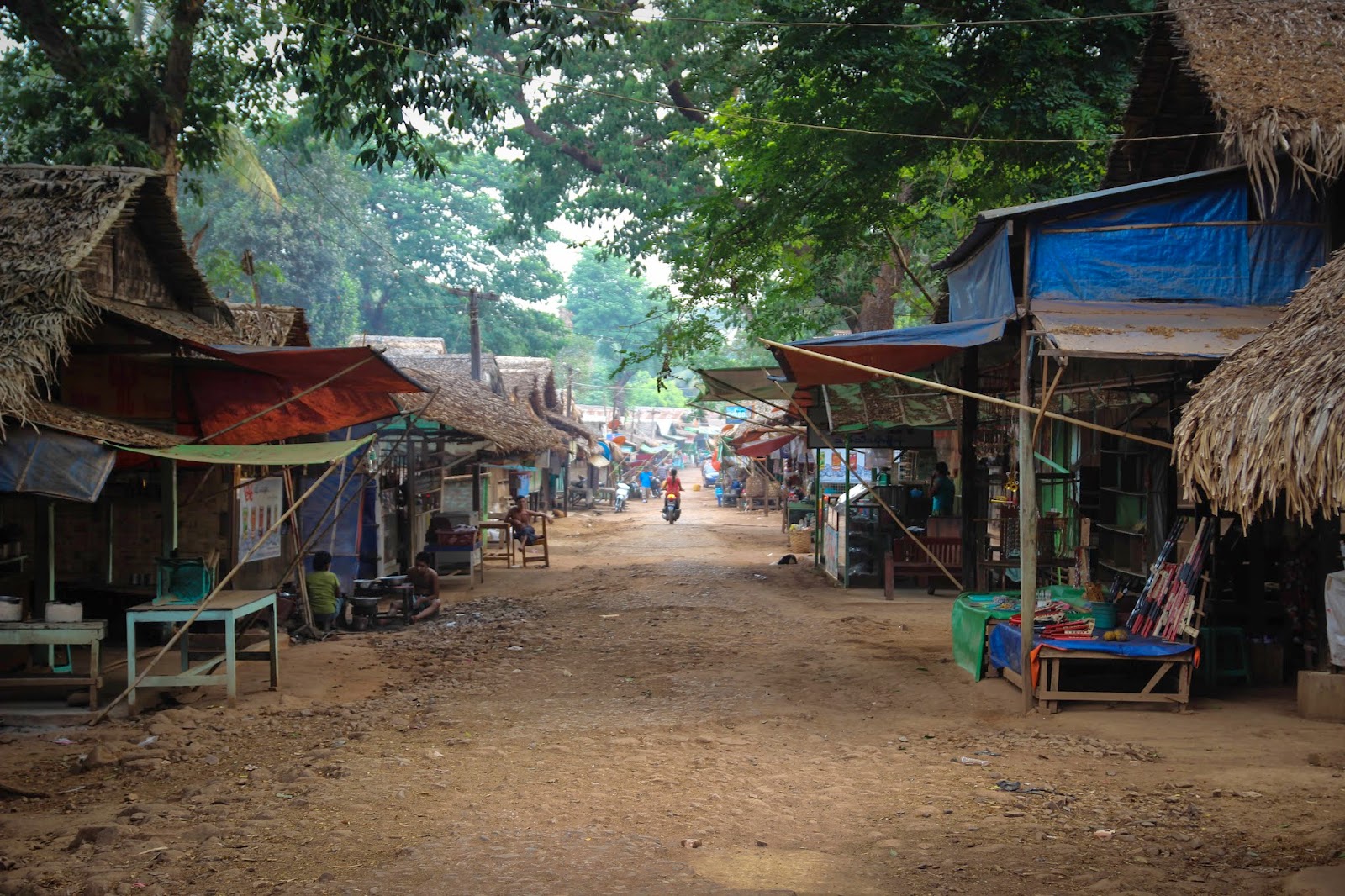 The next morning, we packed small overnight bags just in case we decided to stay at the top (the earliest trucks leave at 6 am, the latest returning at 6 pm, so in order to catch a sunset, you have to stay overnight), leaving our large bags in storage at our hotel.  We boarded the back of a truck, sitting in the very front bench, with roughly 40 other Burmese people and a handful of students (a mix of American and Moroccan) from Hong Kong.  We were packed in like sardines in the open truck bed, sitting on benches that ran across the back as we wound our way up the hill at high speeds, leaving us clinging to the bars in front of us as at least two locals near us managed to doze off. 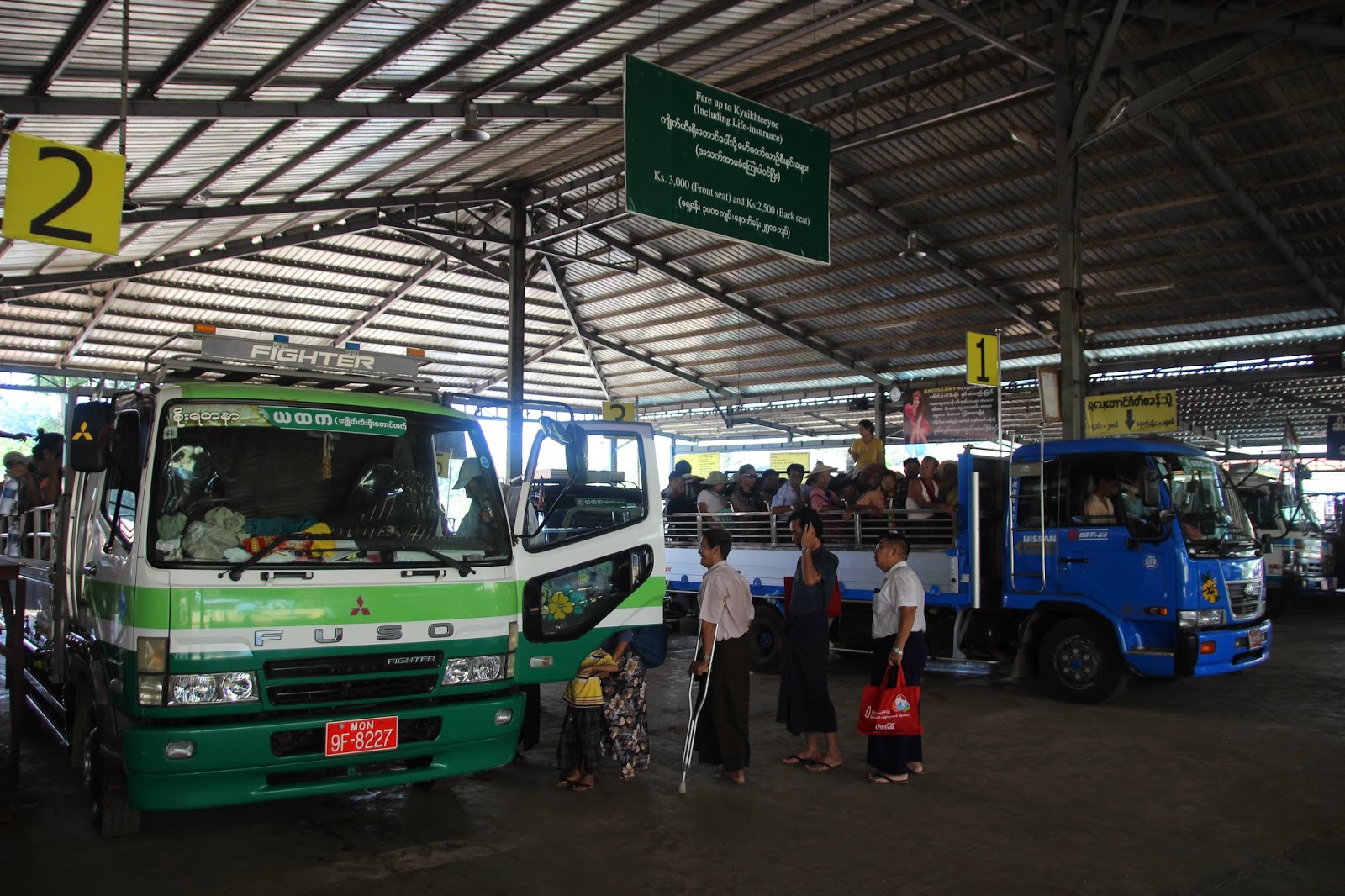 Finally at the top of the mountain, we passed multiple solicitations to be carried, sedan-chair-style, choosing to walk the short distance to the main pavilion.  We paid our foreign entrance fee, removed our shoes, and stepped into the pavilion of the temple.  Honestly, from afar, the Golden Rock wasn't all that impressive.  It looked a bit small, and the surrounding area was about as touristy feeling as Myanmar gets.  But rather than being packed with restaurants and convenience stores and souvenir shops like it would have been in the States, families sat in the shade on mats, bringing picnics from home, and local tourists and pilgrims simply milled around the area.

There was a feeling of reverence for the place, as a major pilgrimage site for Buddhist, which replaced the initial impression of being a tourist attraction with a sense of peace.  Up close, the rock was indeed impressive, as it clung to the side of the mountain ledge out of what seemed like pure will (or the strand of Buddha's hair).  We walked around for a while, taking photos from near and far, seeing families and monks and kids, and watching men go up to the rock to add bits of gold leaf to the sides.  Women aren't permitted to touch the rock, but there is a small viewing platform to the side, where I watched the monks in prayer next to the rock and the fluttering bits of paper from the backs of the sticky pieces of gold leaf. 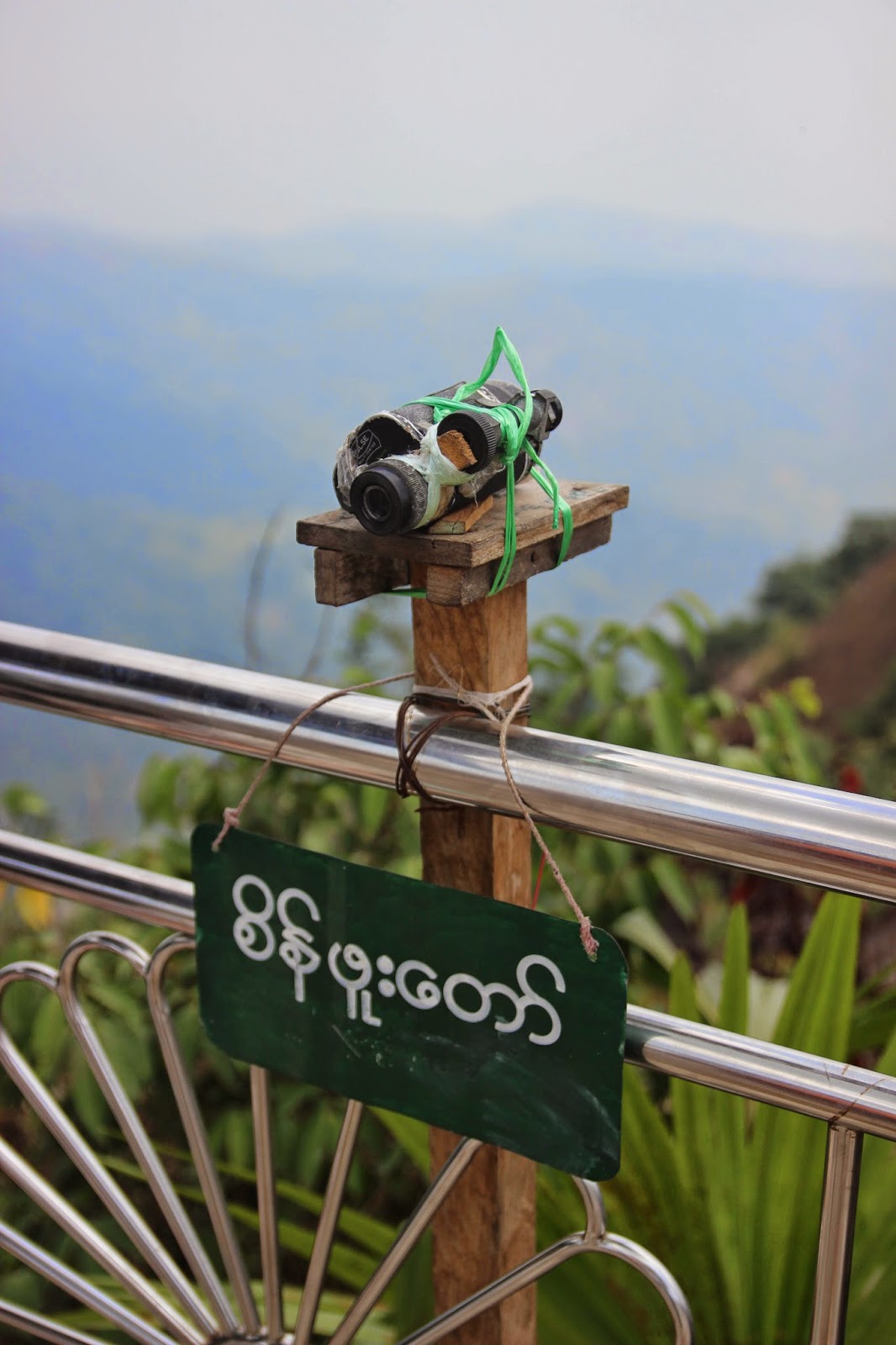 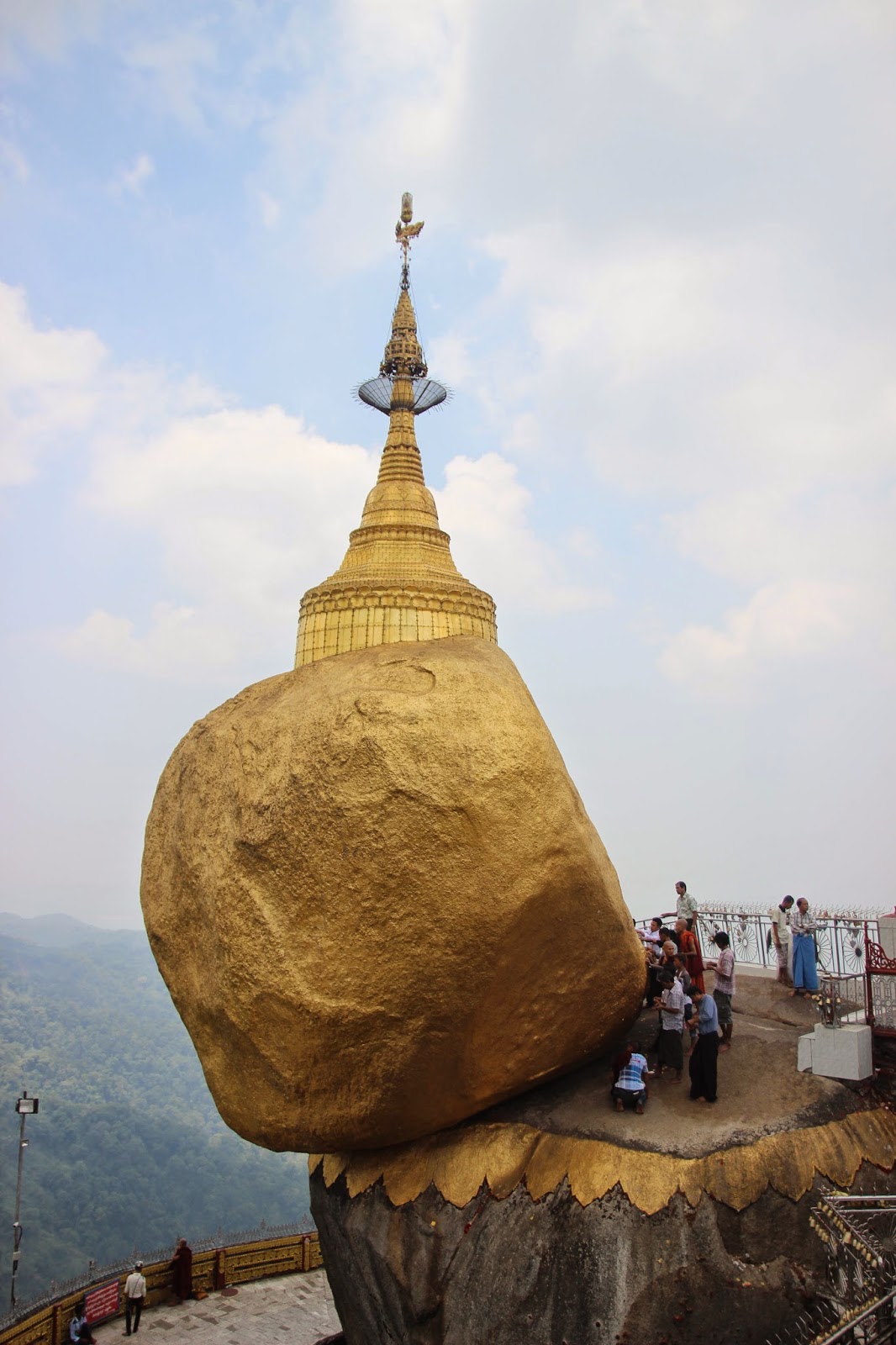 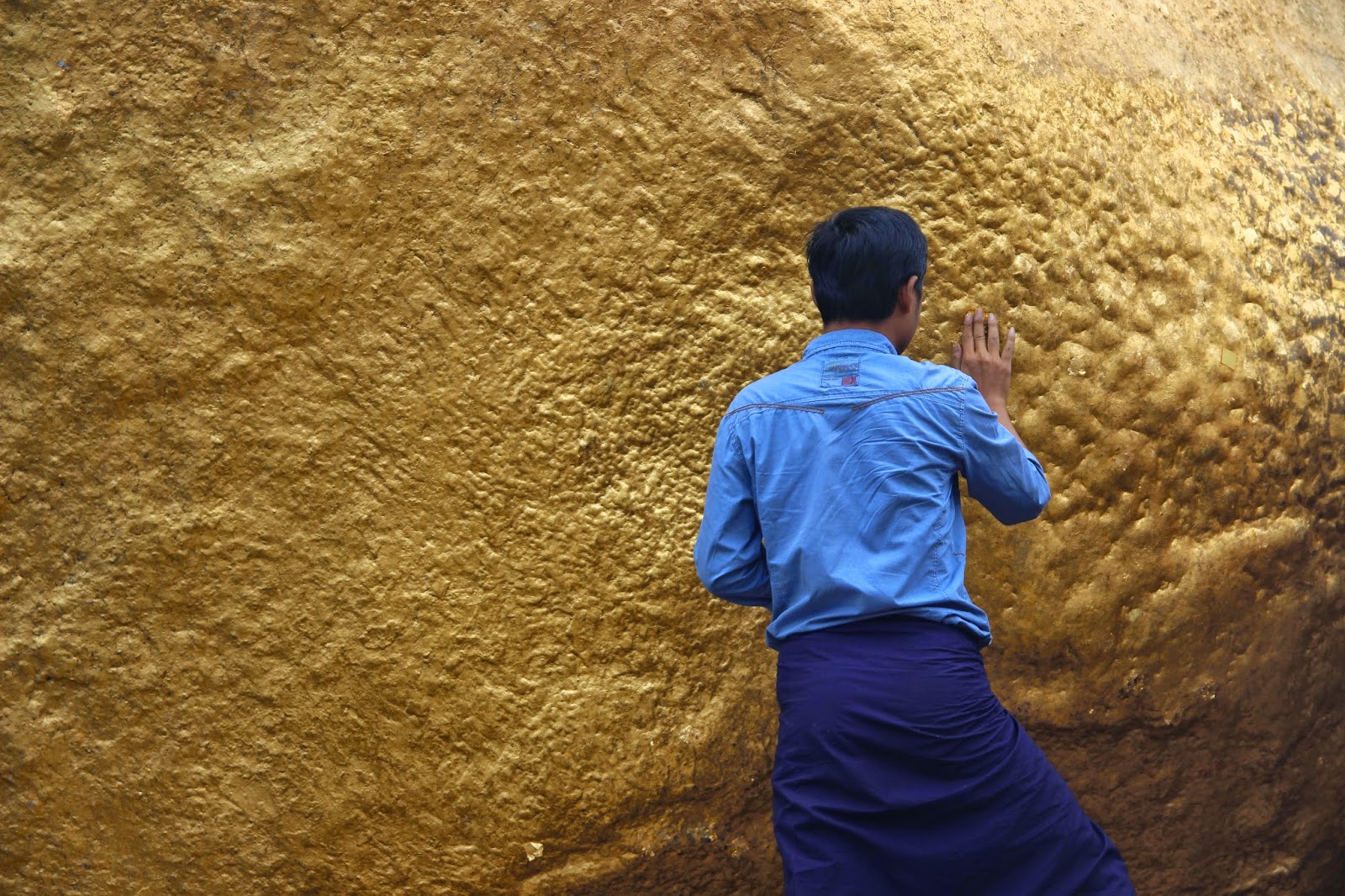 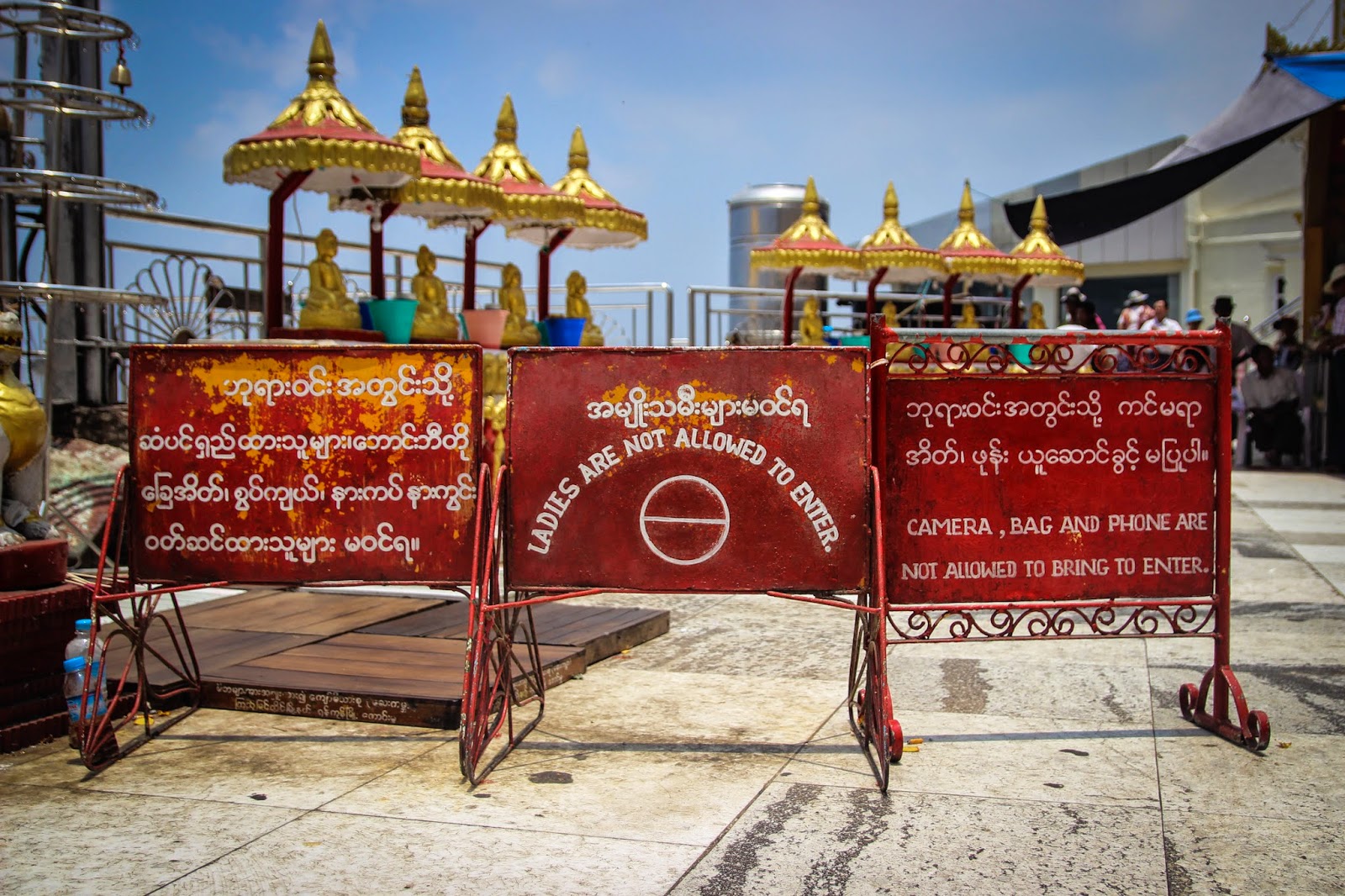 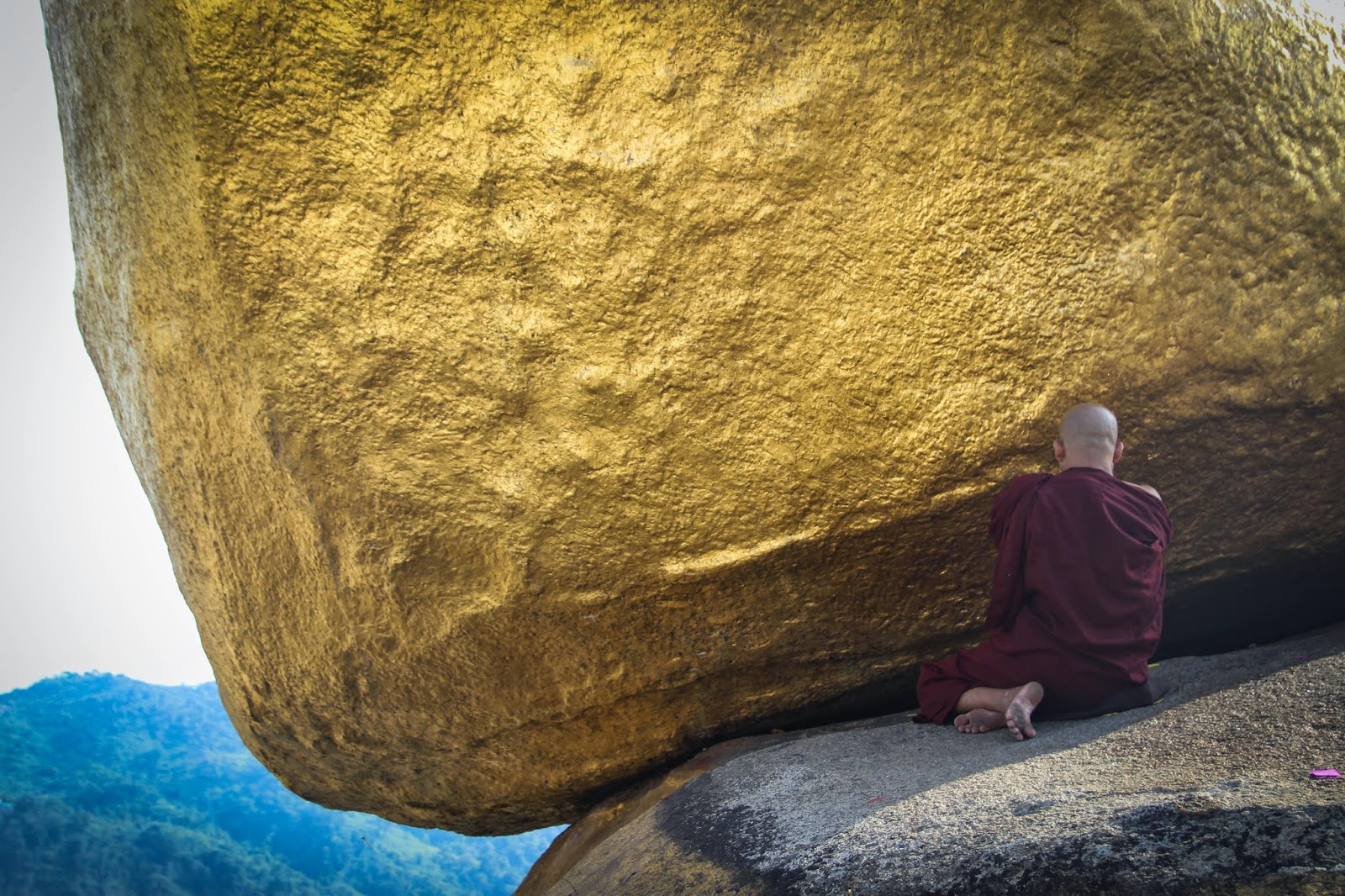 We walked past the rock and down a few stairs on the other side, grabbing a bite of lunch and inquiring about a room for the night.  The price started at $60 for a room, but we eventually got them down to $35 with breakfast, which was fairly consistent with other hotel rooms across the country (and a big reason why having a travel buddy is a huge bonus in Myanmar).  We decided to stay the night, and we relaxed in the hotel a bit, watching bits and pieces of movies - while we had a TV, the channel changed every time the folks in the office decided to change the channel on the restaurant TV! - until closer to sunset.

Just before sunset, we returned to the temple pavilion, which was now full of locals who must have been staying the night at what looked like large dorms for Buddhist pilgrims - likely just open spaces where they could sleep on the floor.  I returned to the small viewing platform, mesmerized by a group of young nuns repeating a chant in unison.  As the sun began to set, the rock was lit up by a number of spotlights, making it appear to glow against the horizon.  The sky gradually moved from a dusty pink to a deep, dark blue, the light slowly fading away as we observed the rock. 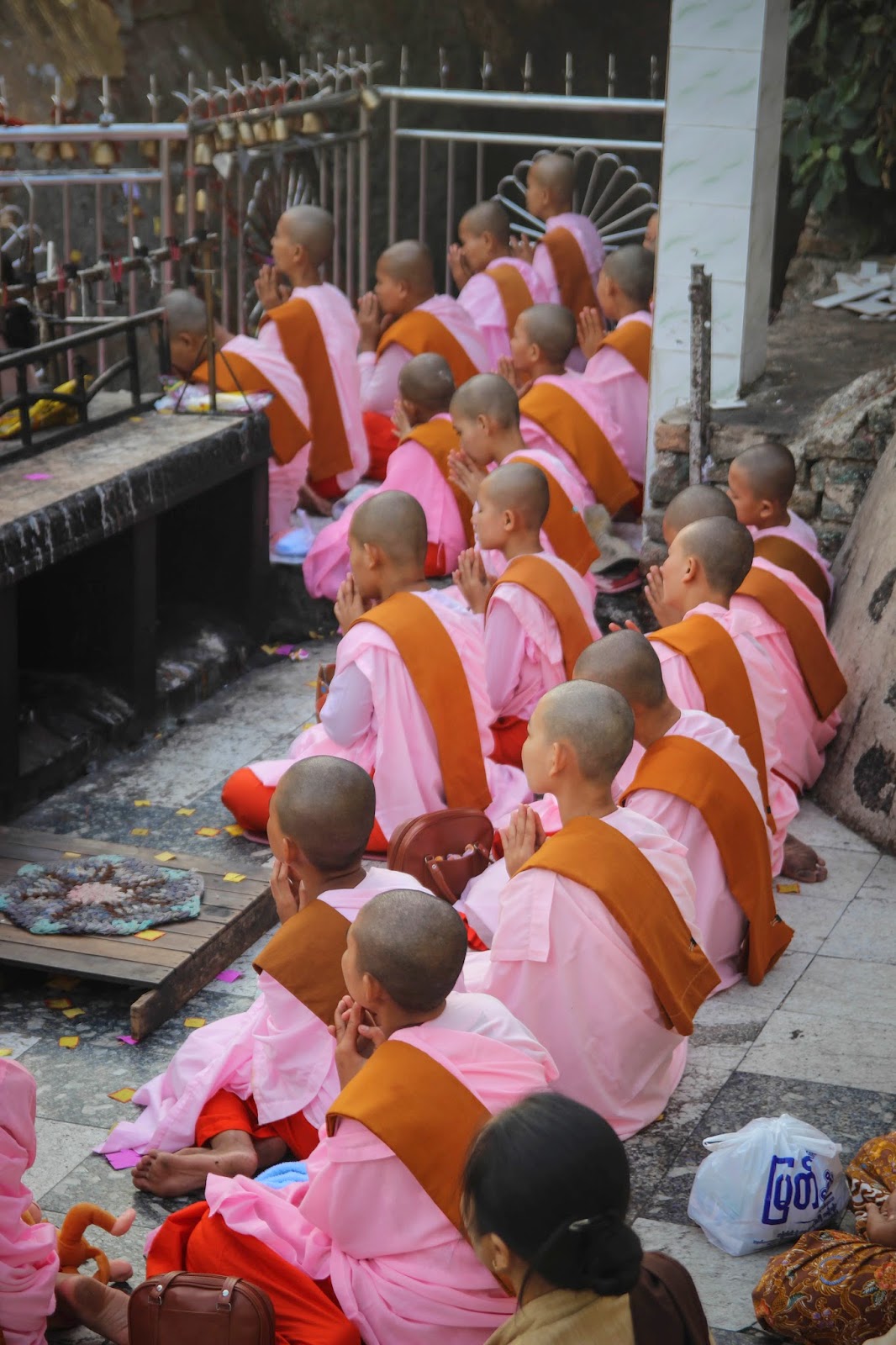 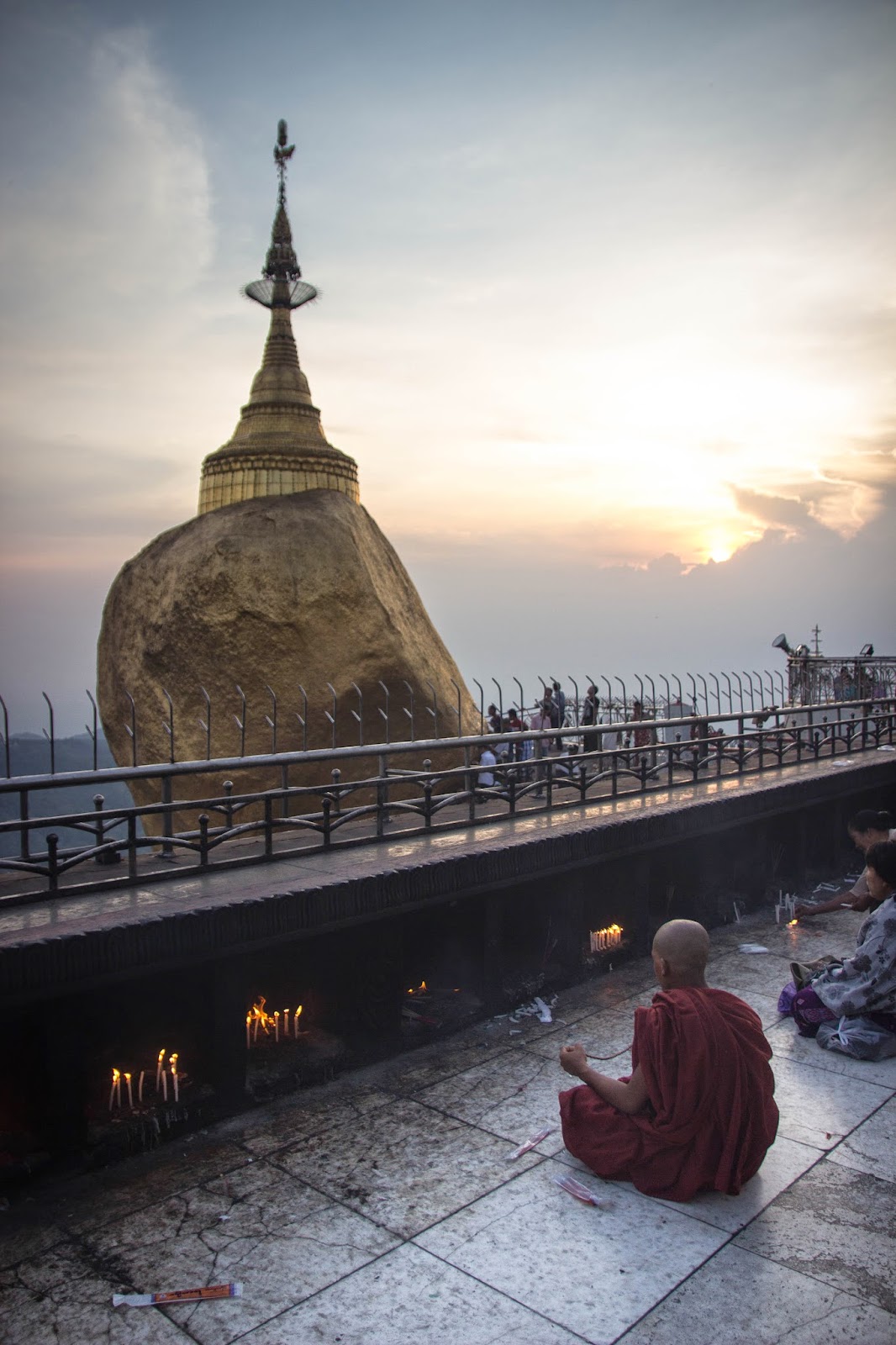 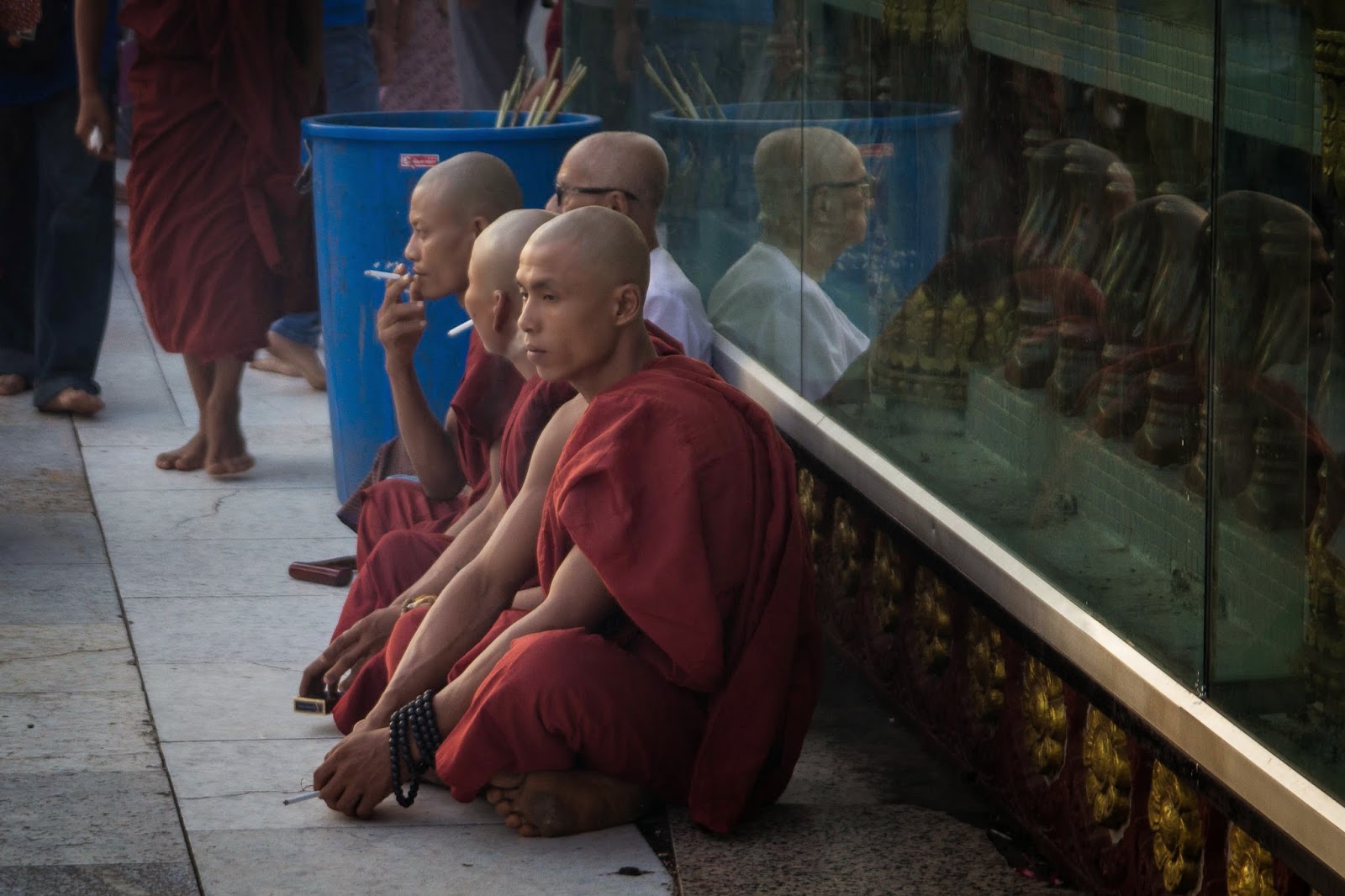 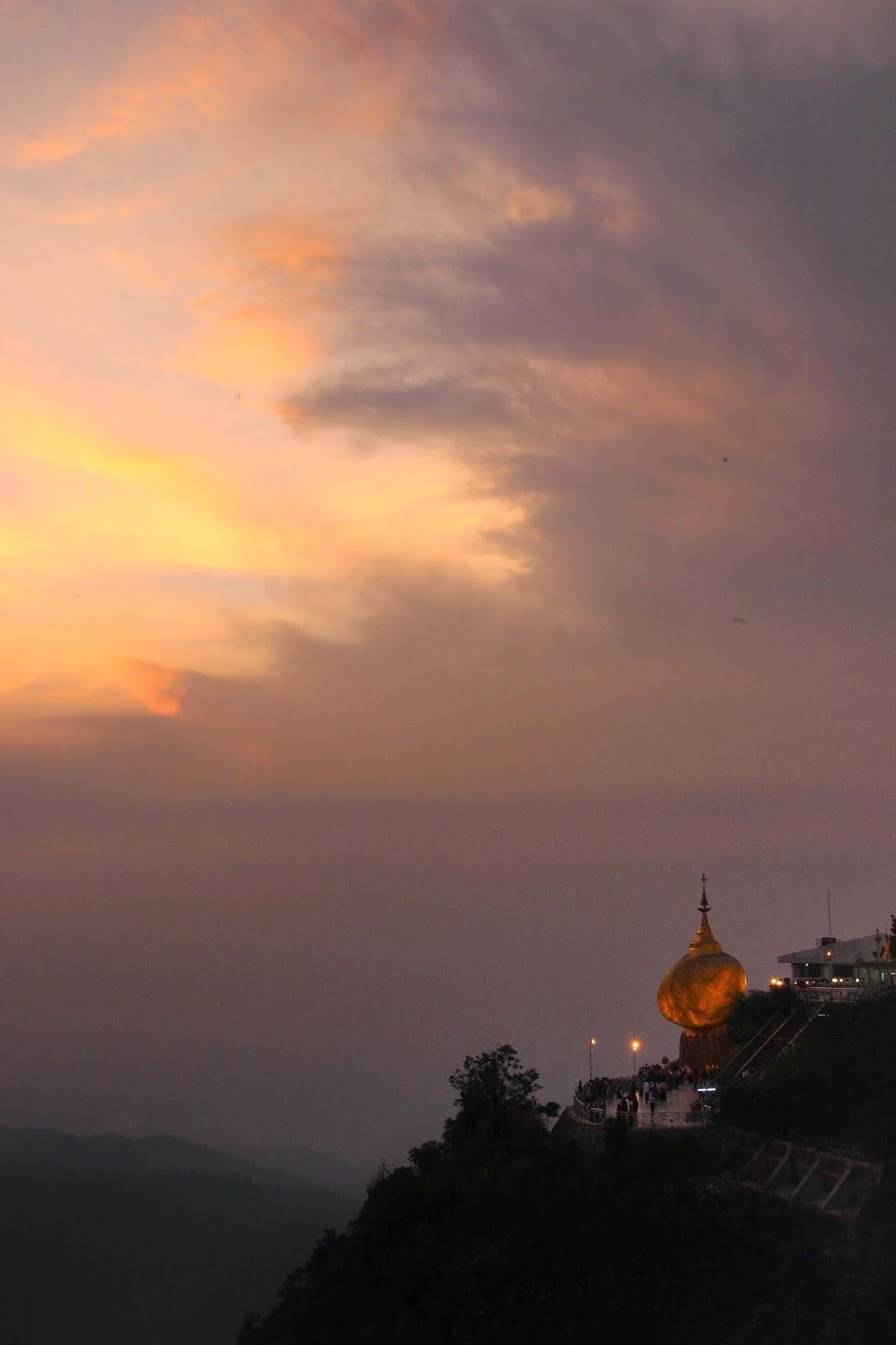 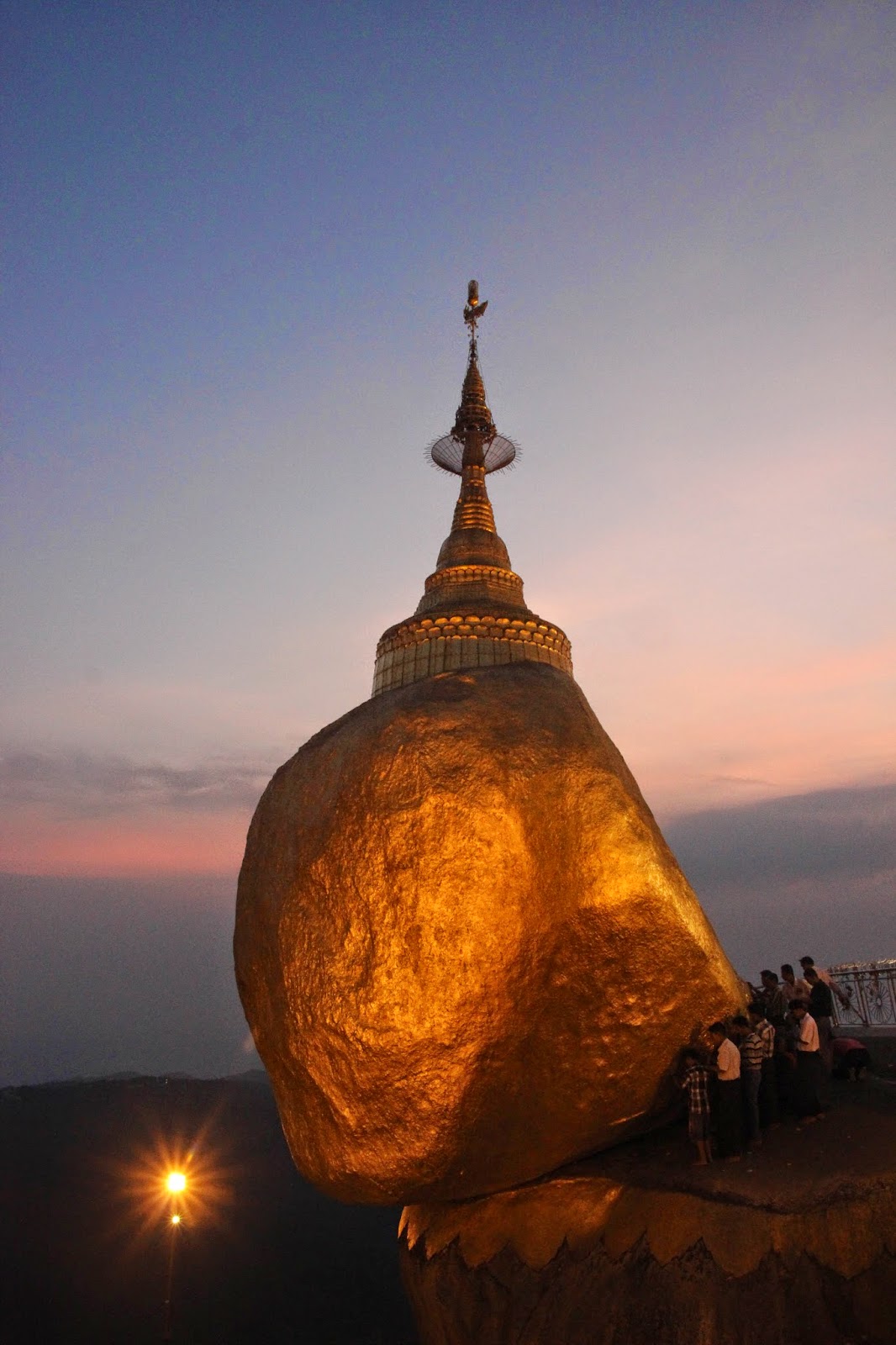 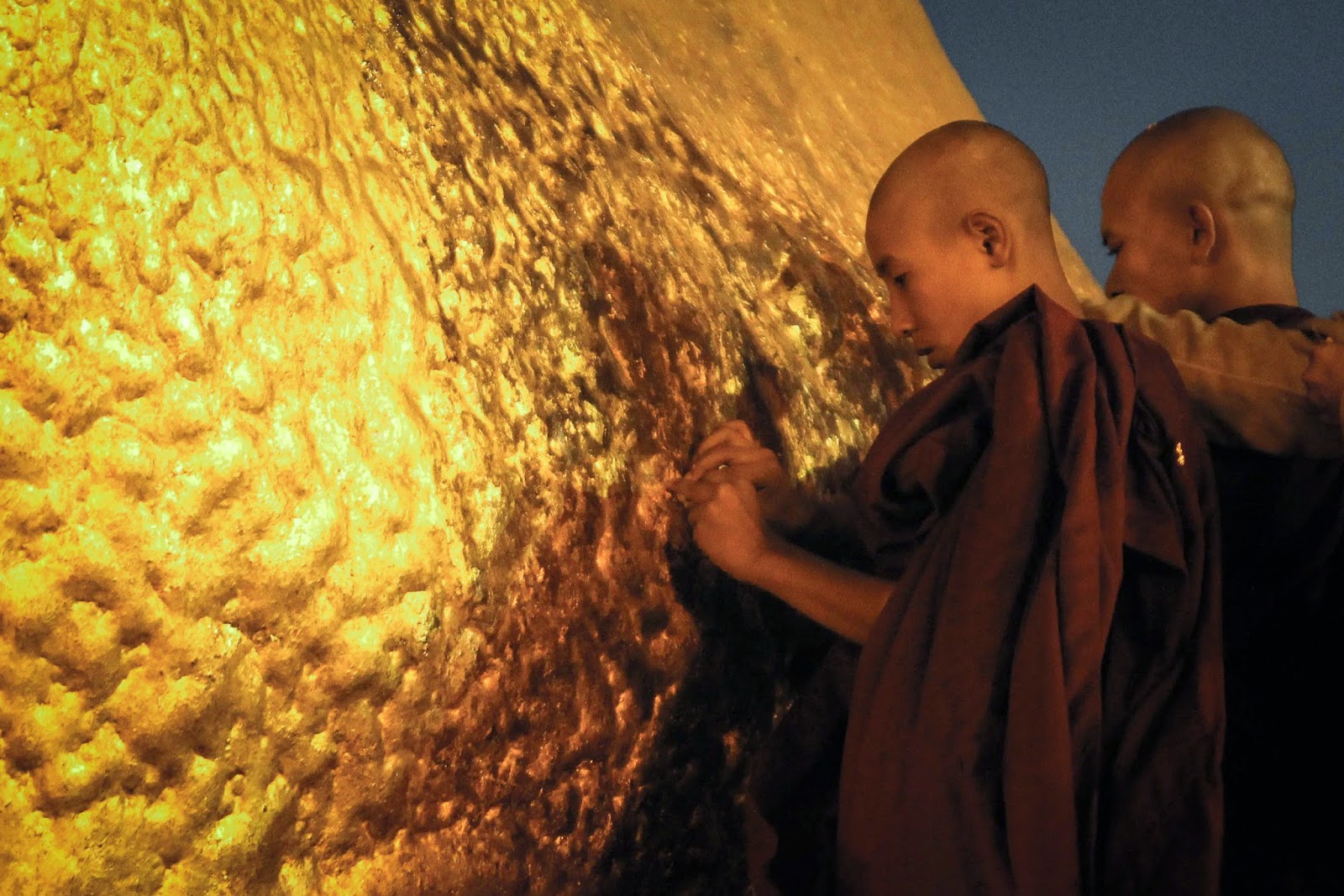 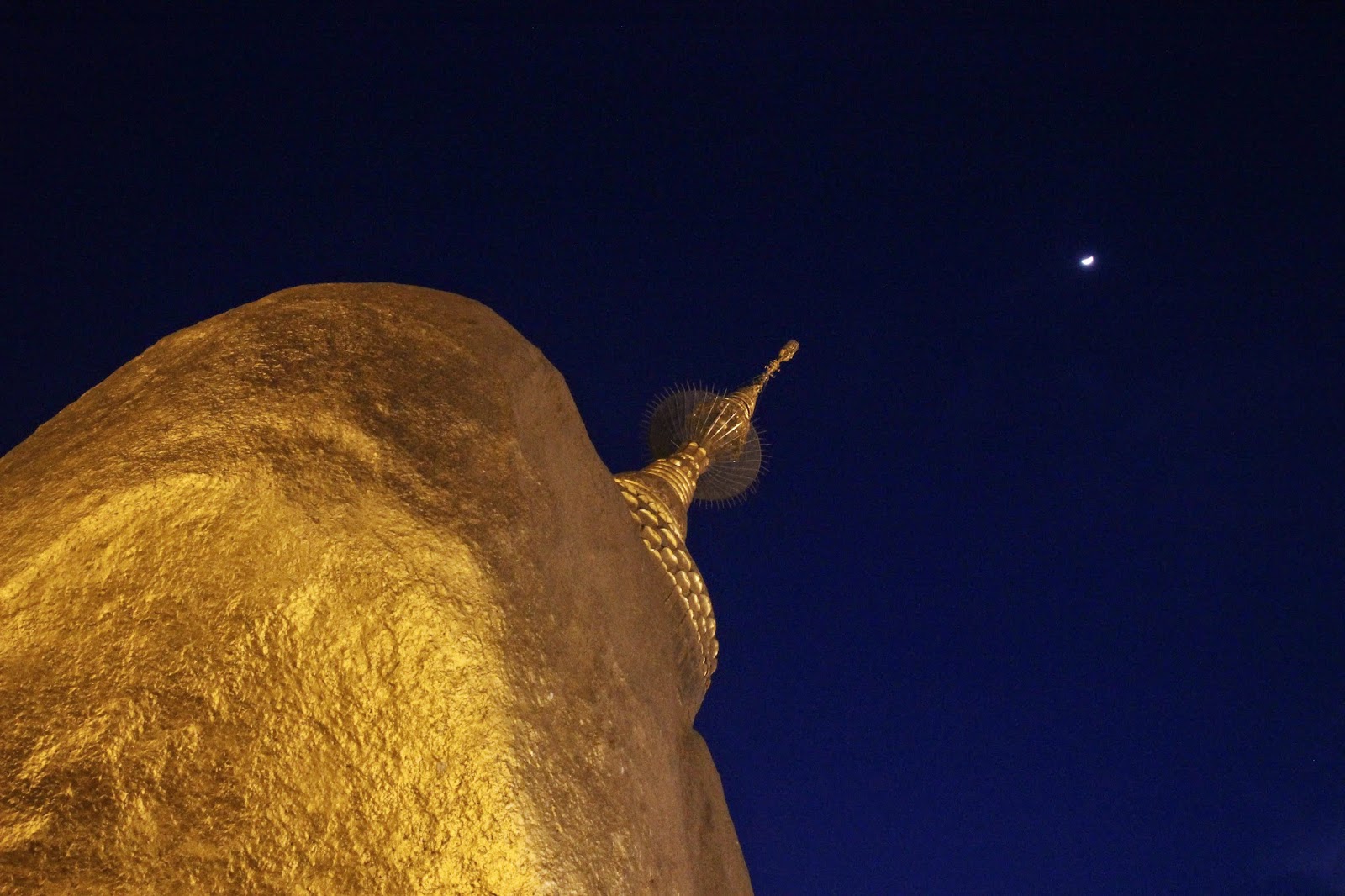 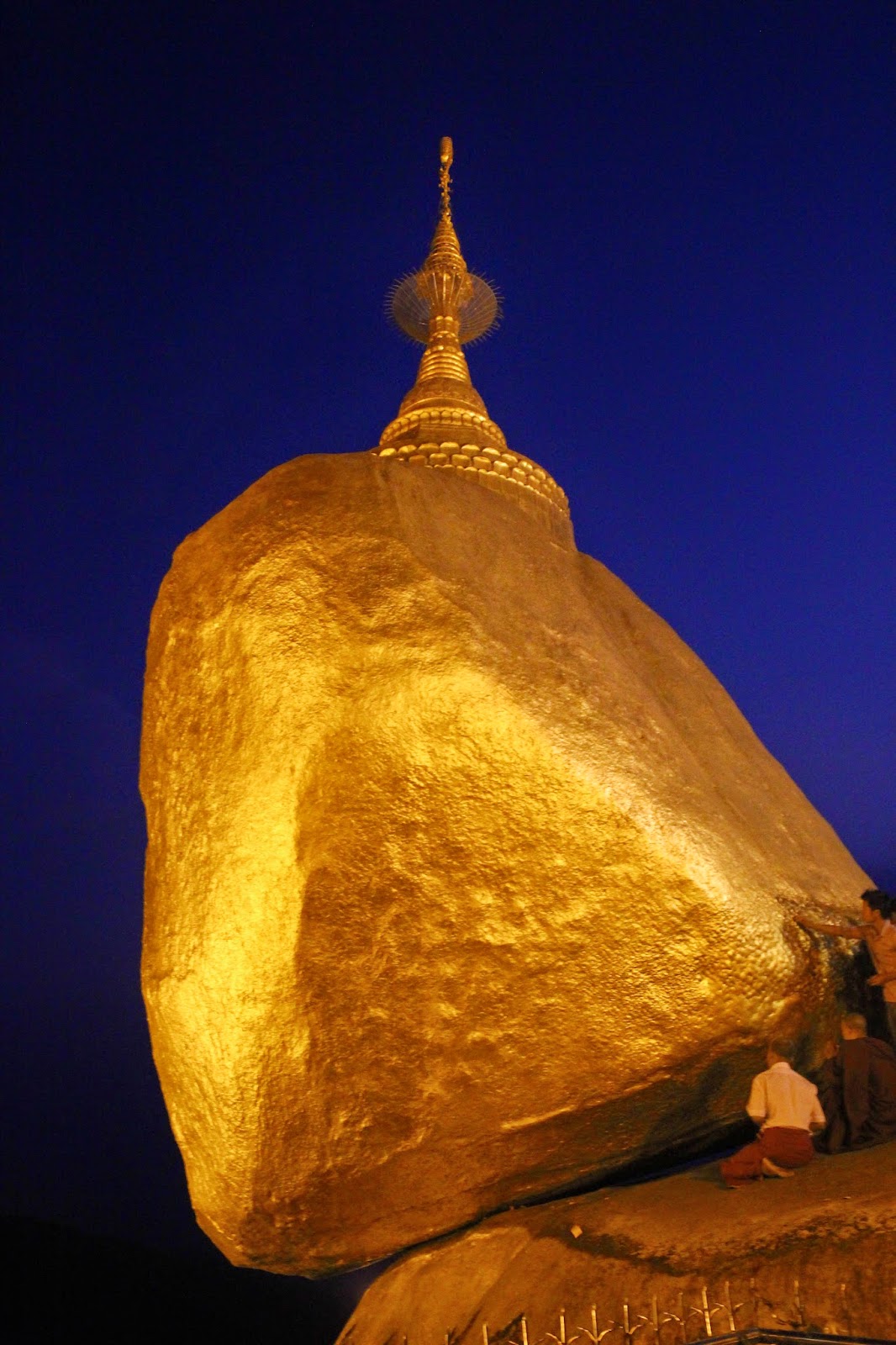 Finally, having taken in enough of the spectacle, we returned to our hotel for a relatively expensive but very tasty meal, and we watched as much as we could of more bits of movies (based on the whims of the office remote), before going to sleep.  We wound up skipping sunrise, as the sky was far too hazy to see any color, and, after a breakfast of fried rice, caught a truck down to Kinpun around 9 am.  This time we sat on the second row, my knees lodged under the seat in front of me.  The ride down was actually easier than the ascent, giving us a nice, cool breeze as we made our way back.

As soon as we arrived in Kinpun, we were ushered over to another bus (after quickly grabbing our big bags), which would take us to Bago, where we would need to wait a few hours - having some lunch, visiting an internet cafe, and hanging around the bus station - before another bus would take us to Kalaw, our next destination.  It was a long, long day of travel, between one overheated bus, and another that had obviously seen previous days of glory - complete with old chandeliers and curtains on the windows, and seats that folded down to fill the aisles.  Both blasted music videos, though the second bus thankfully turned off the music sometime in the middle of the night (though two girls sitting across from us decided to listen to their own music at full volume, sans headphones, sometime around 4).  We pulled into Kalaw sometime around 4:15, thankful to be done with our day of transit, our body clocks fully out of whack, and in need of the next few days of relaxation before beginning a trek to Inle Lake.

Posted by Outlander Abroad at 9:48 AM