A Return to Sanur and Manta Point, and a Farewell

The reason we had kept our visit to Lombok so ridiculously short, is we wanted to have a chance to return to Sanur and give João an opportunity to dive at Manta Point before his flight back to Portugal.
We were thrilled to get Magic Toto and Uning as our guides, and we lucked out to be booked with a group full of visiting instructors, so we almost had our guides to ourselves!  When we checked back in with the shop the day before the dive, we learned that that day's group had also visited Manta Point and seen three mola molas, but not a single manta!  So it was definitely going to be a gamble the following day as to what we would see.  But we wouldn't be disappointed.

The evening before our dive, after the long day of travel back from Lombok, we relaxed with ice cream, massages, and a delicious dinner of grilled seafood and duck satay - cooked on stalks of lemongrass - washed down with Bintang beer, at a nearby spot called Pregina Warung.  As we ate our meal, a small procession of kids marched by, two wearing the Barong dance costume, the others wearing traditional sarongs and headscarves and playing tiny instruments.  It was the perfect welcome back to Sanur. 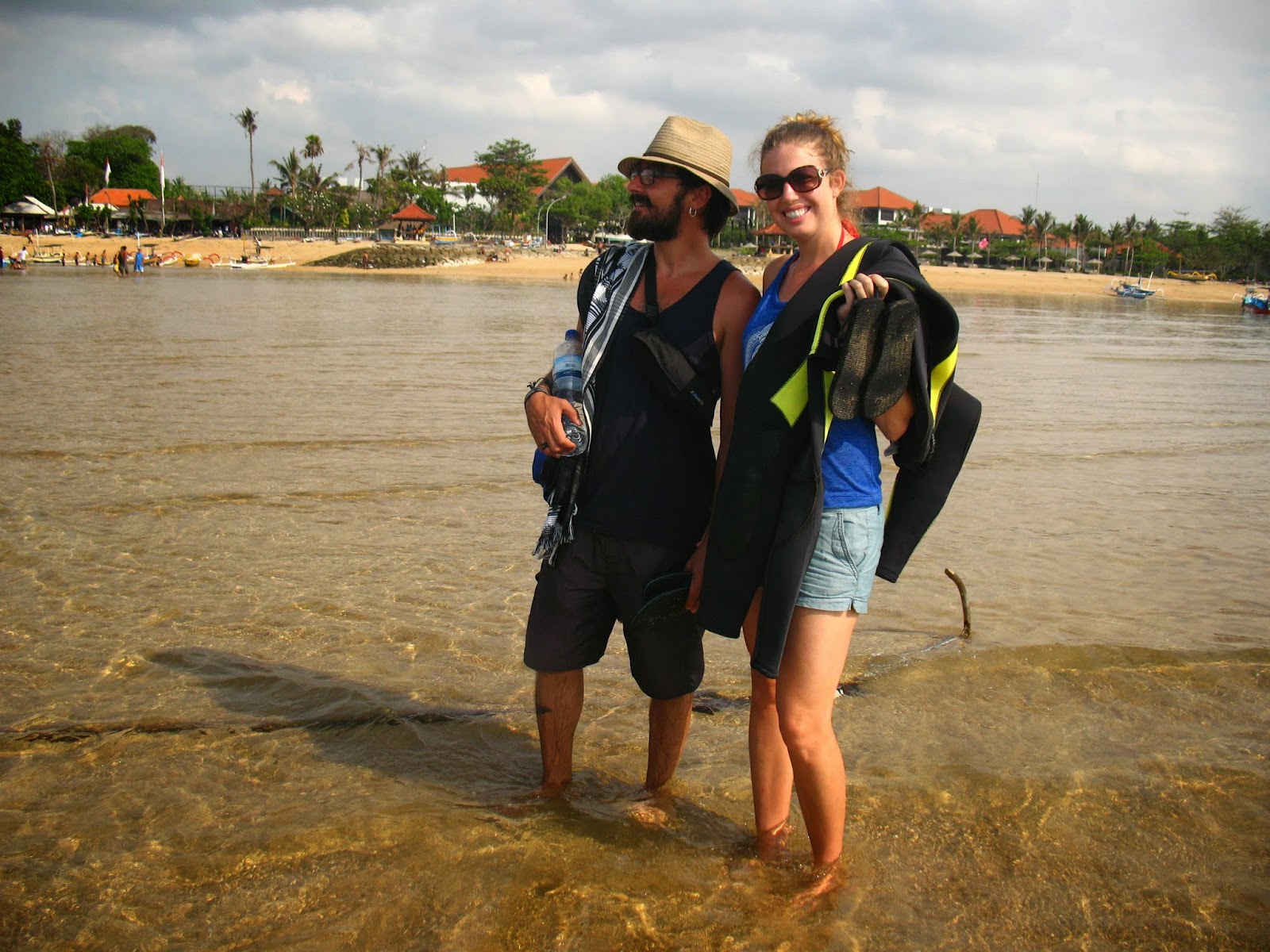 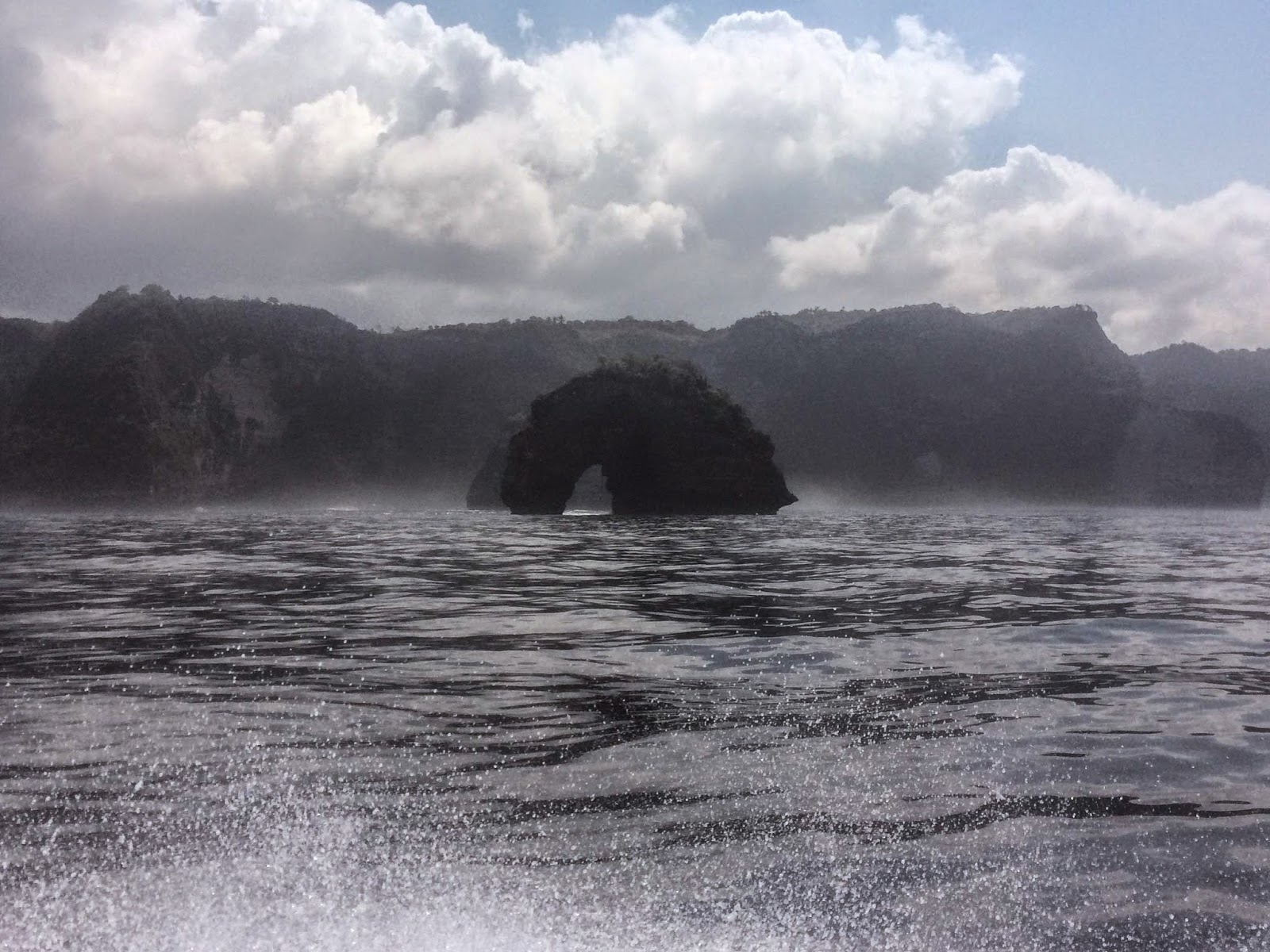 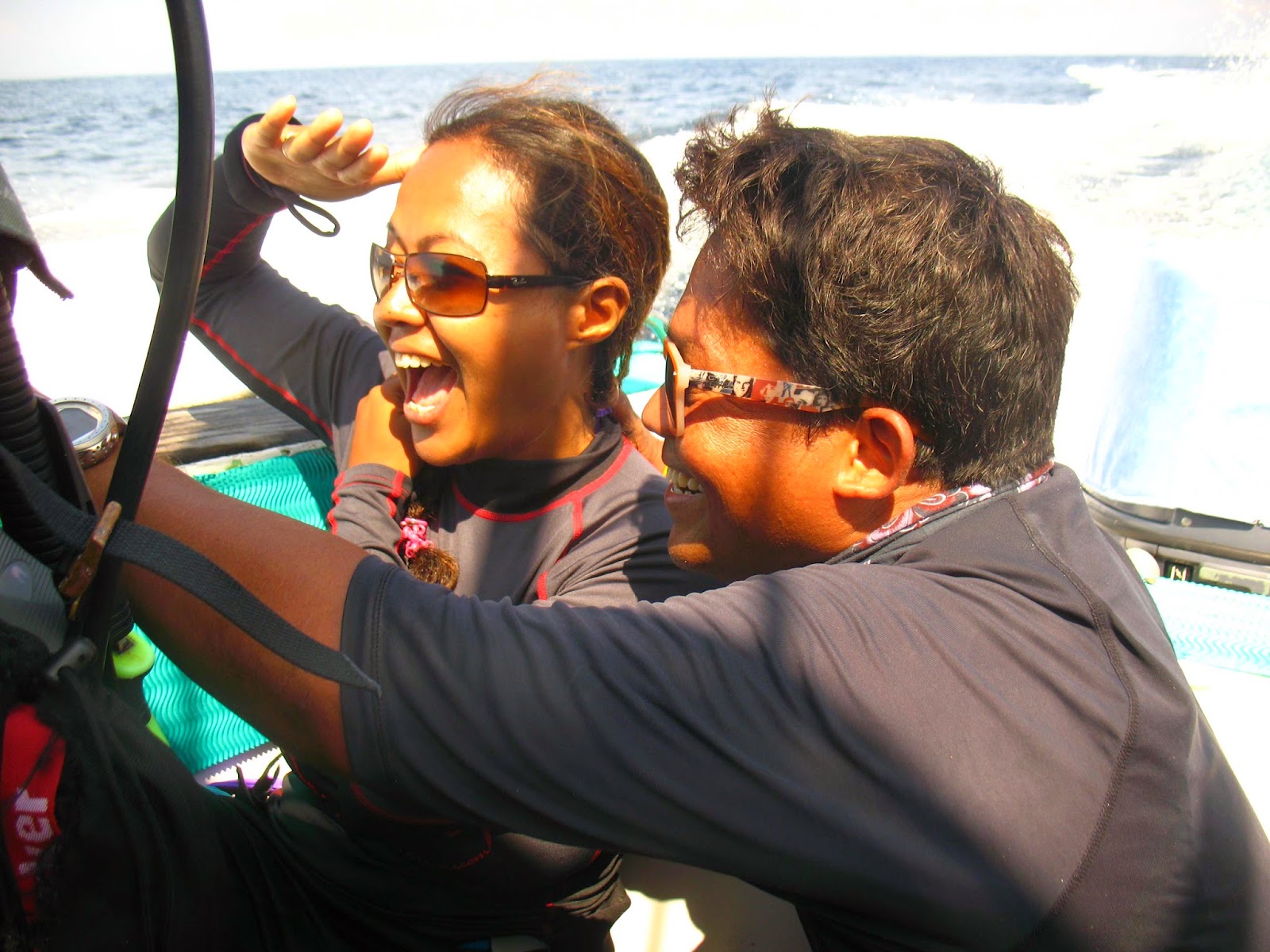 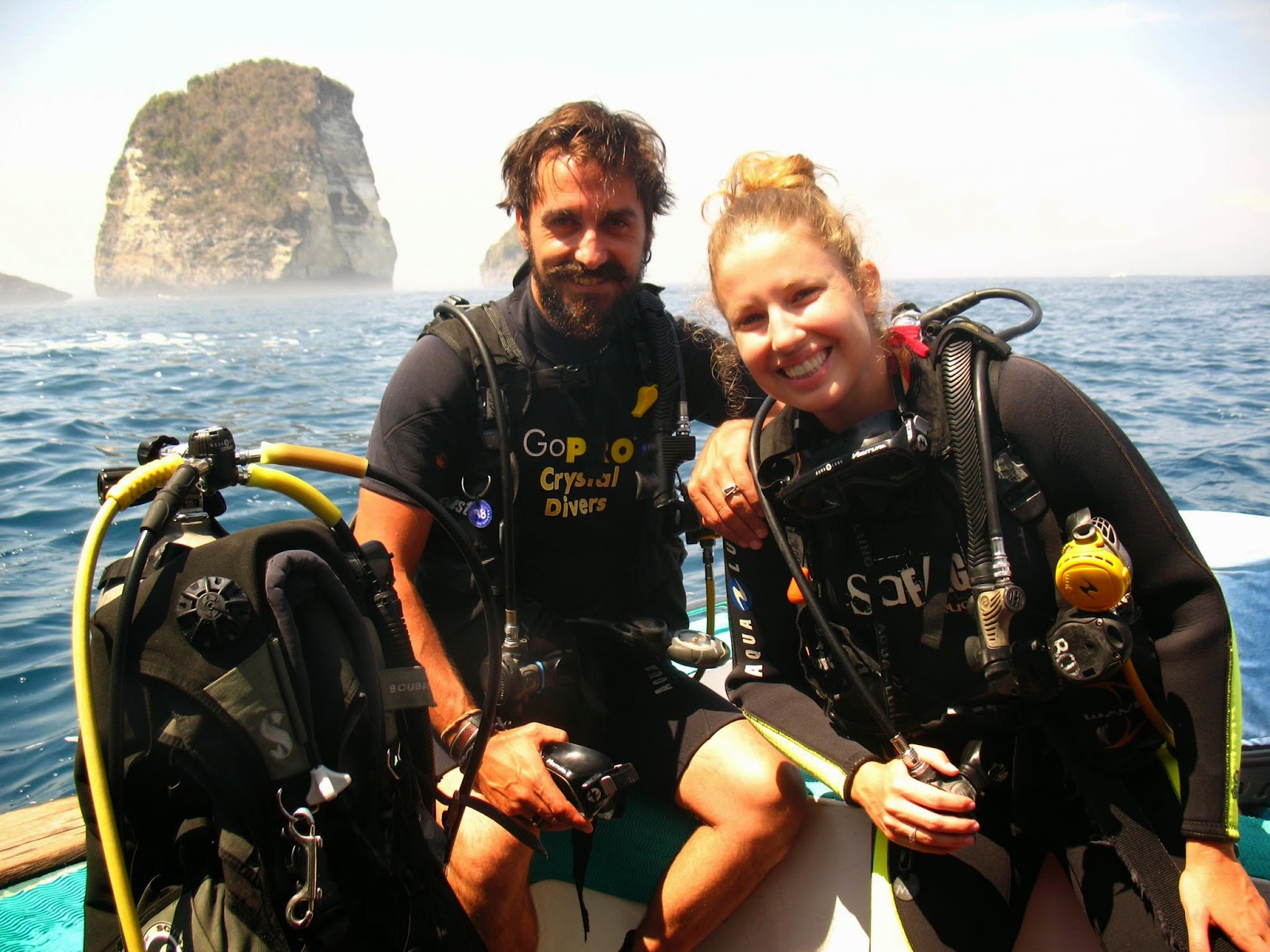 The next morning, I came prepared with a pair of seasickness pills after my first unfortunate trip to Manta Point, and with the previous day's boat ride fresh on my mind.  Thankfully, the boat ride wasn't near as choppy as it had been on my previous visit!  We arrived at Manta Point without any issue or nausea, and the dive turned out to be nearly as amazing as the previous one.  While we didn't spot any molas, we very quickly saw five or six mantas gliding around together at a cleaning station.  I found myself near eye level with them again as they swirled around, then I descended to join João and Toto, who had brought the camera this time and was filming. 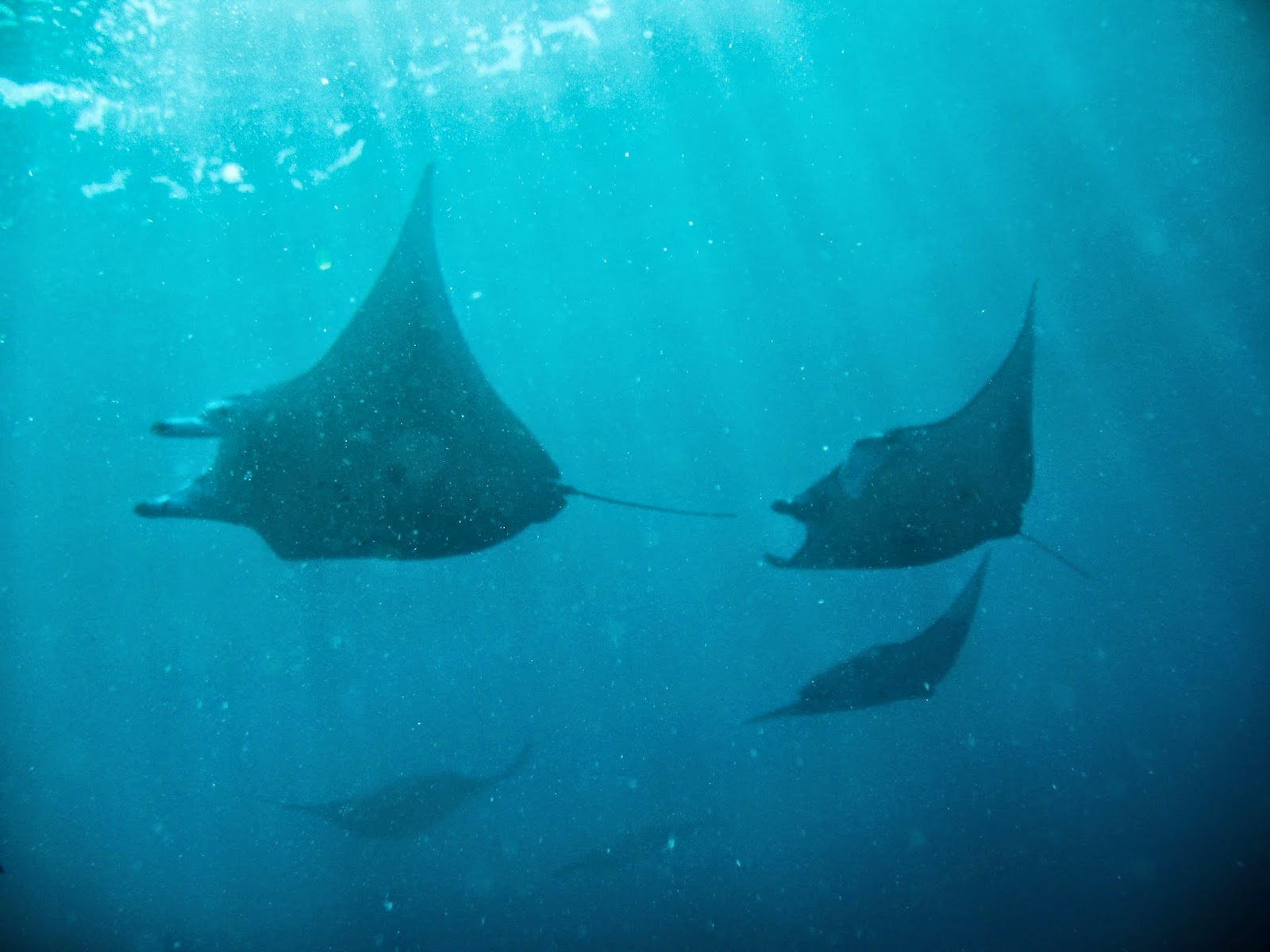 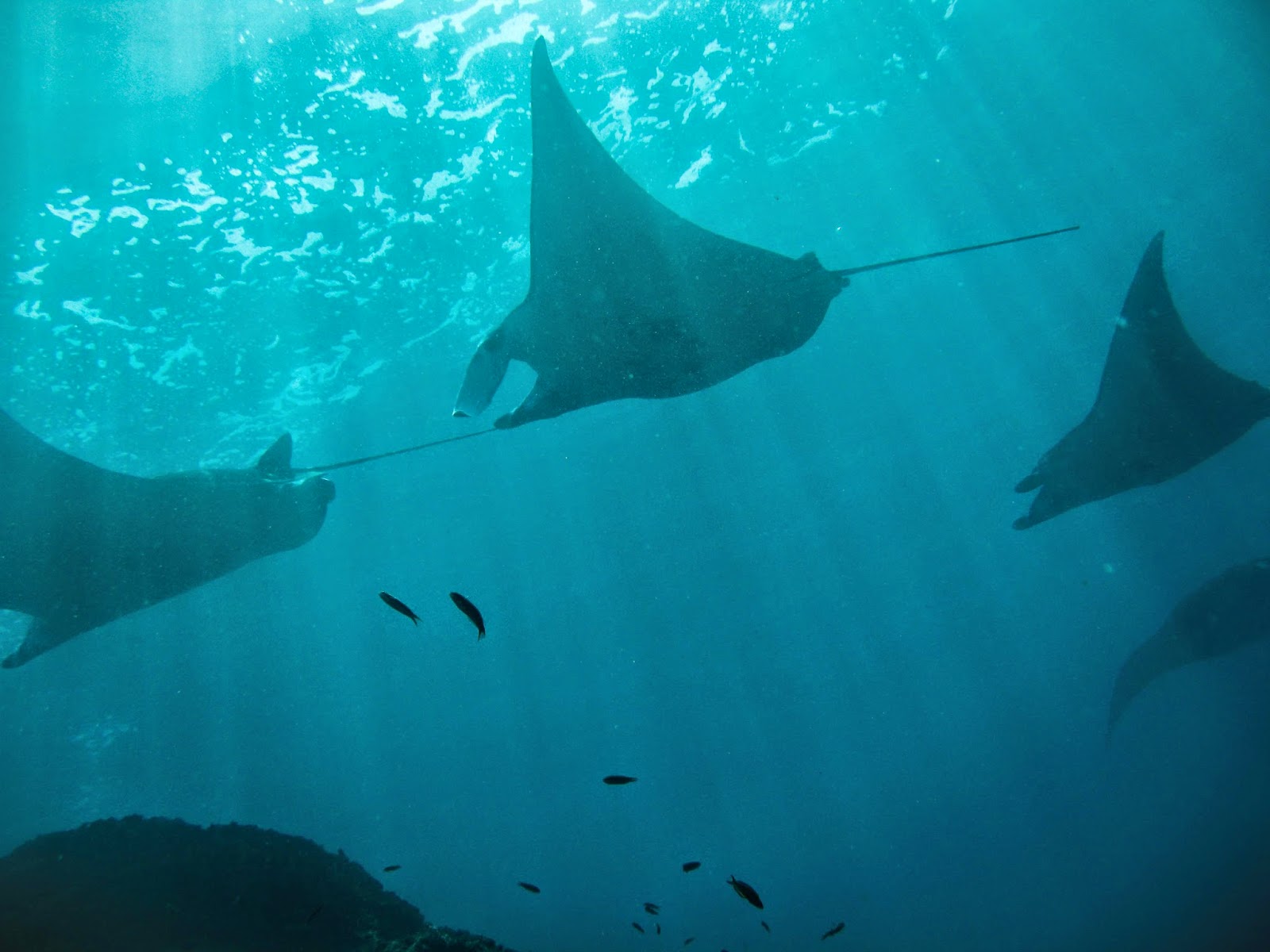 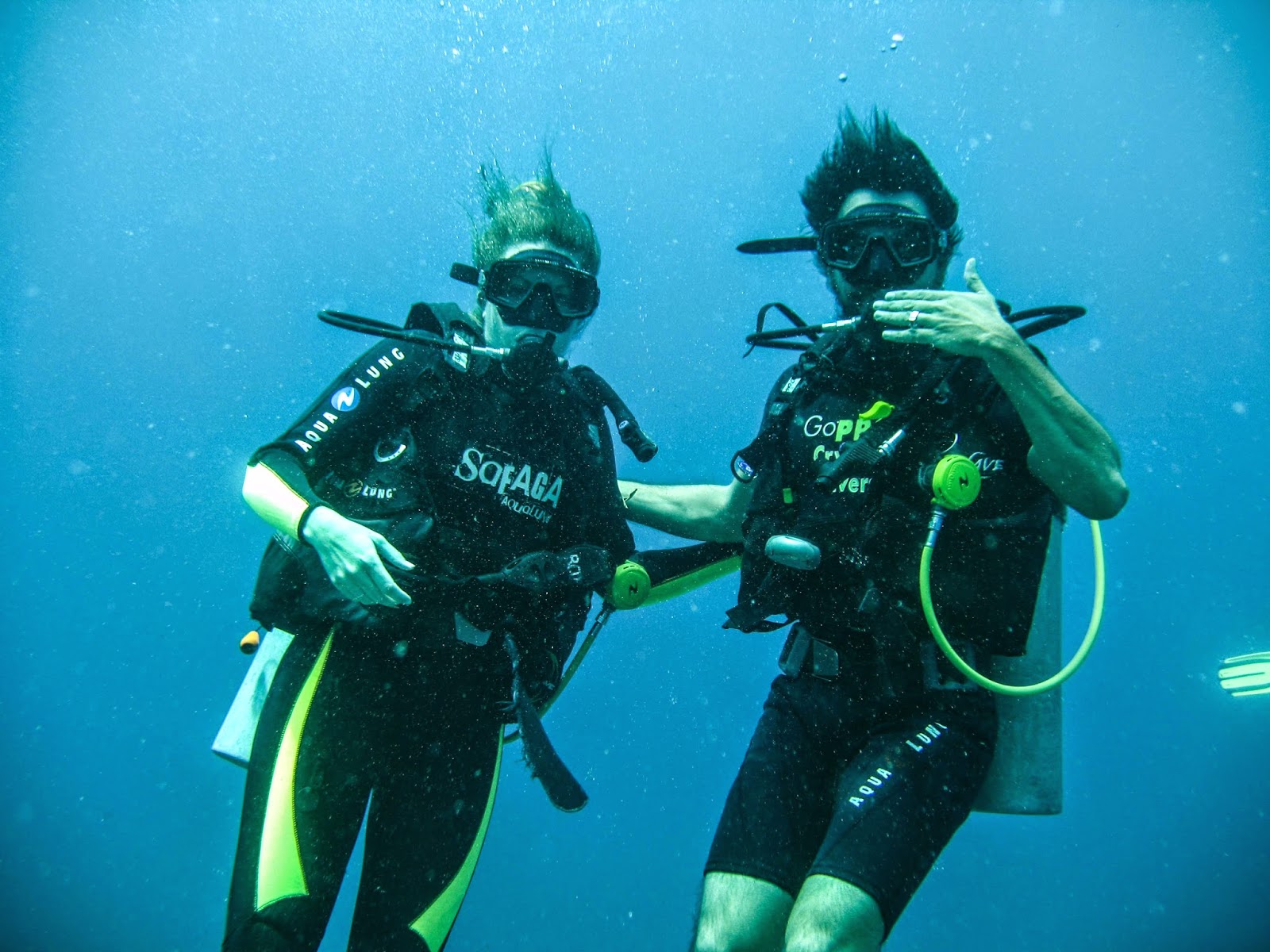 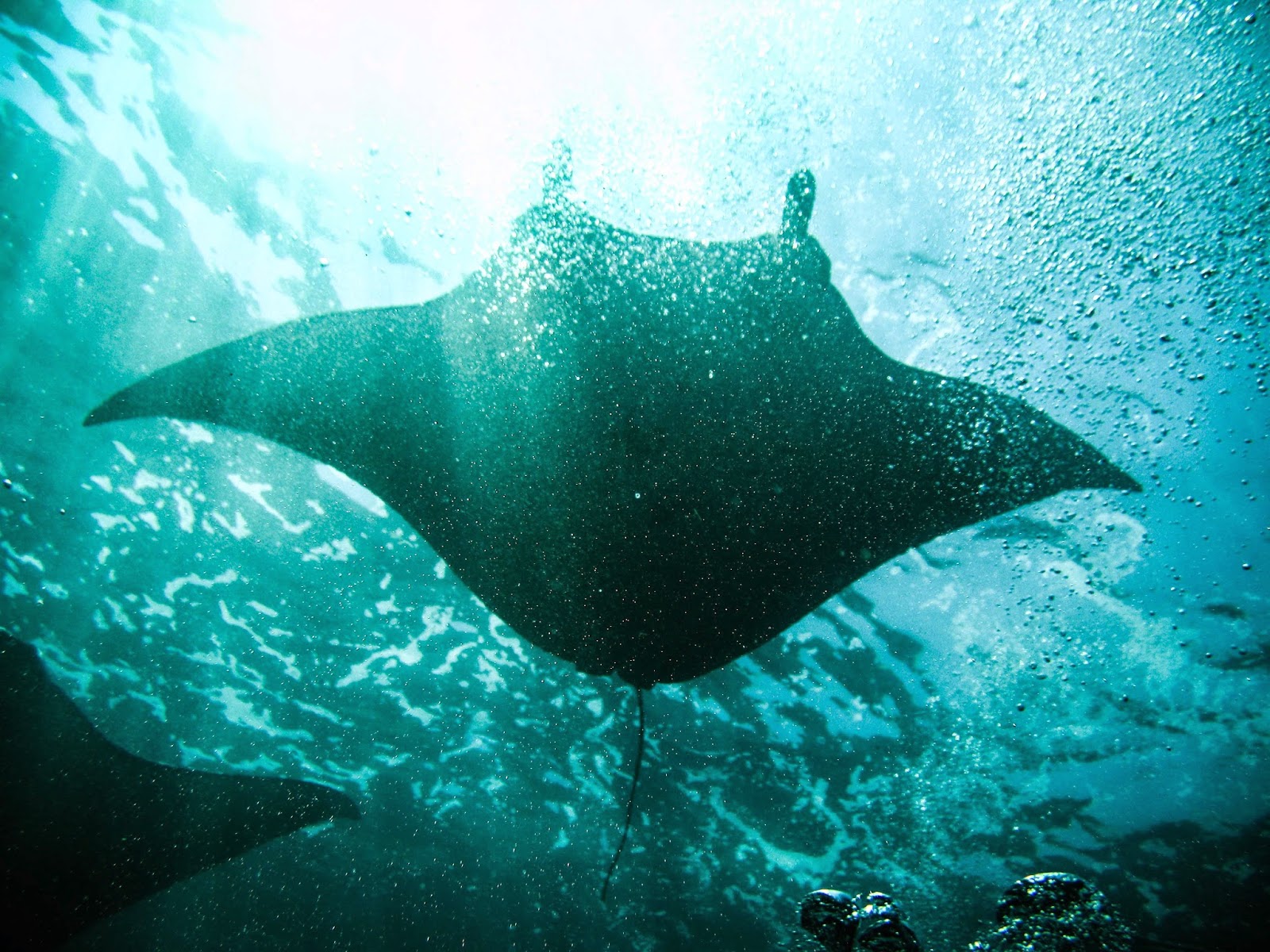 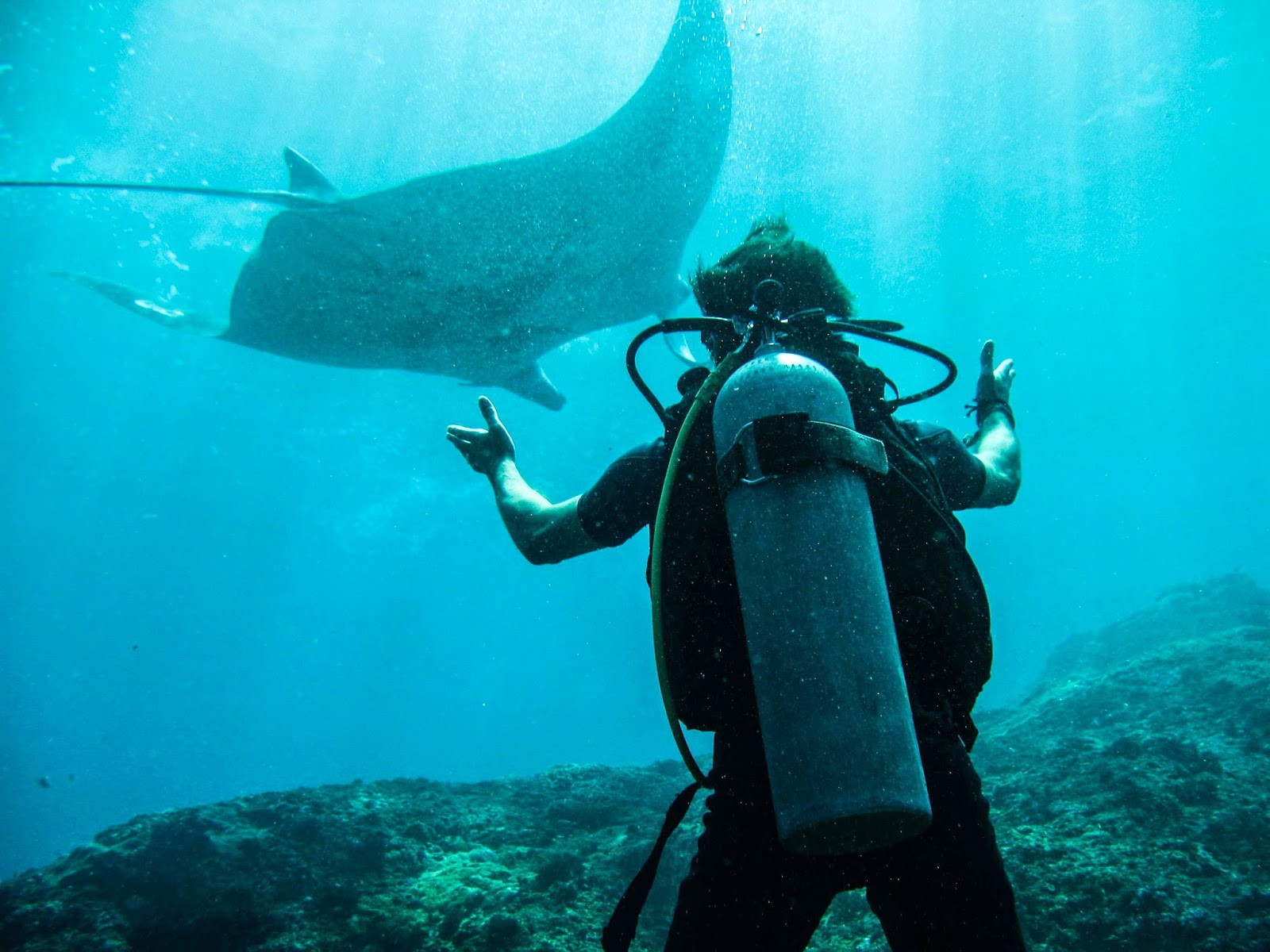 We continued exploring, spotting another banded sea snake as João began his ascent with Uning, having gone through his air a bit faster than the rest of the group.  The rest of us continued, coming upon more mantas individually.  I got up close to one of them again, swimming along next to it until I stopped short because another was swimming right towards me.  Eventually we made our way up to our safety stop and finally surfaced. 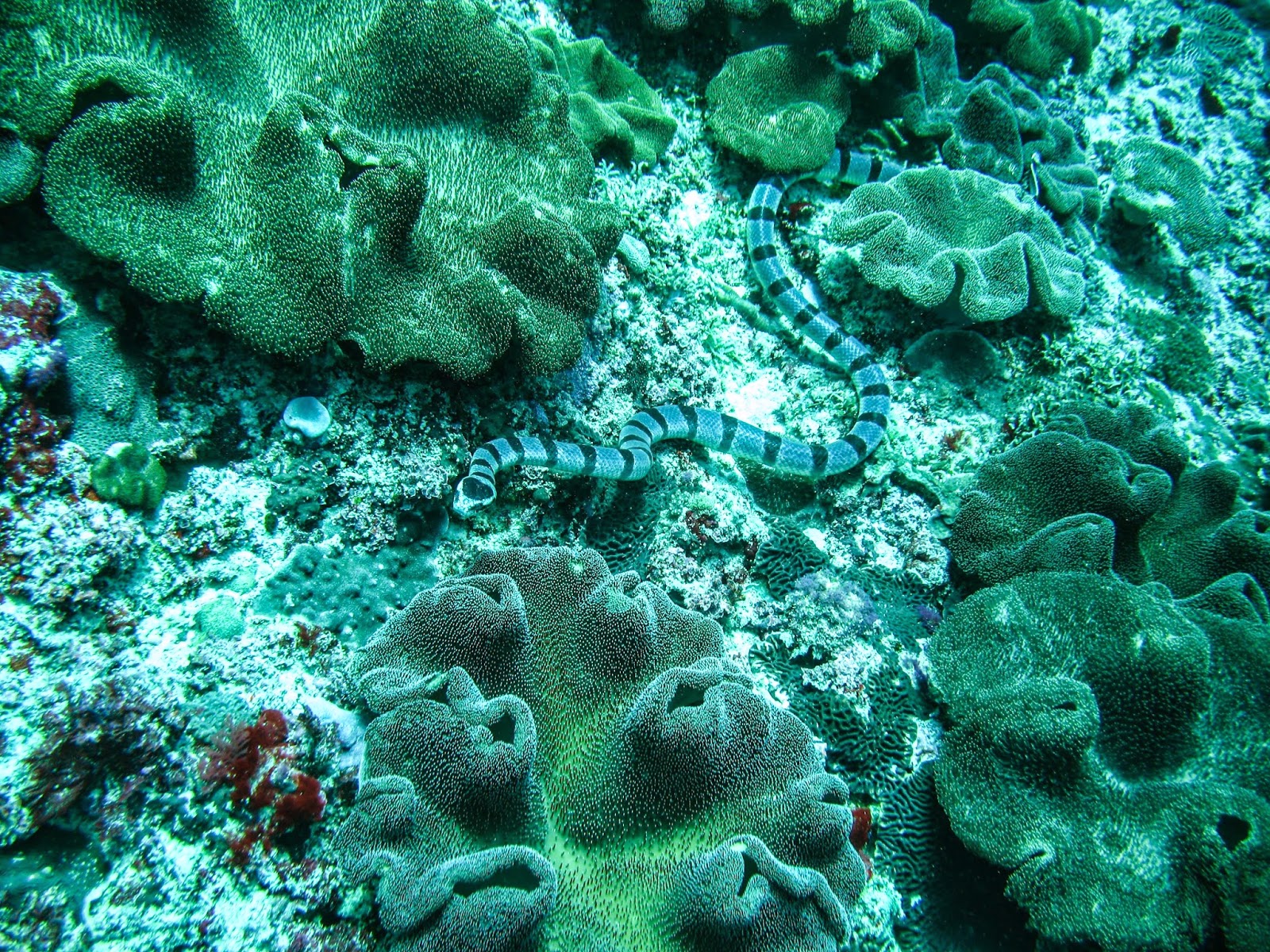 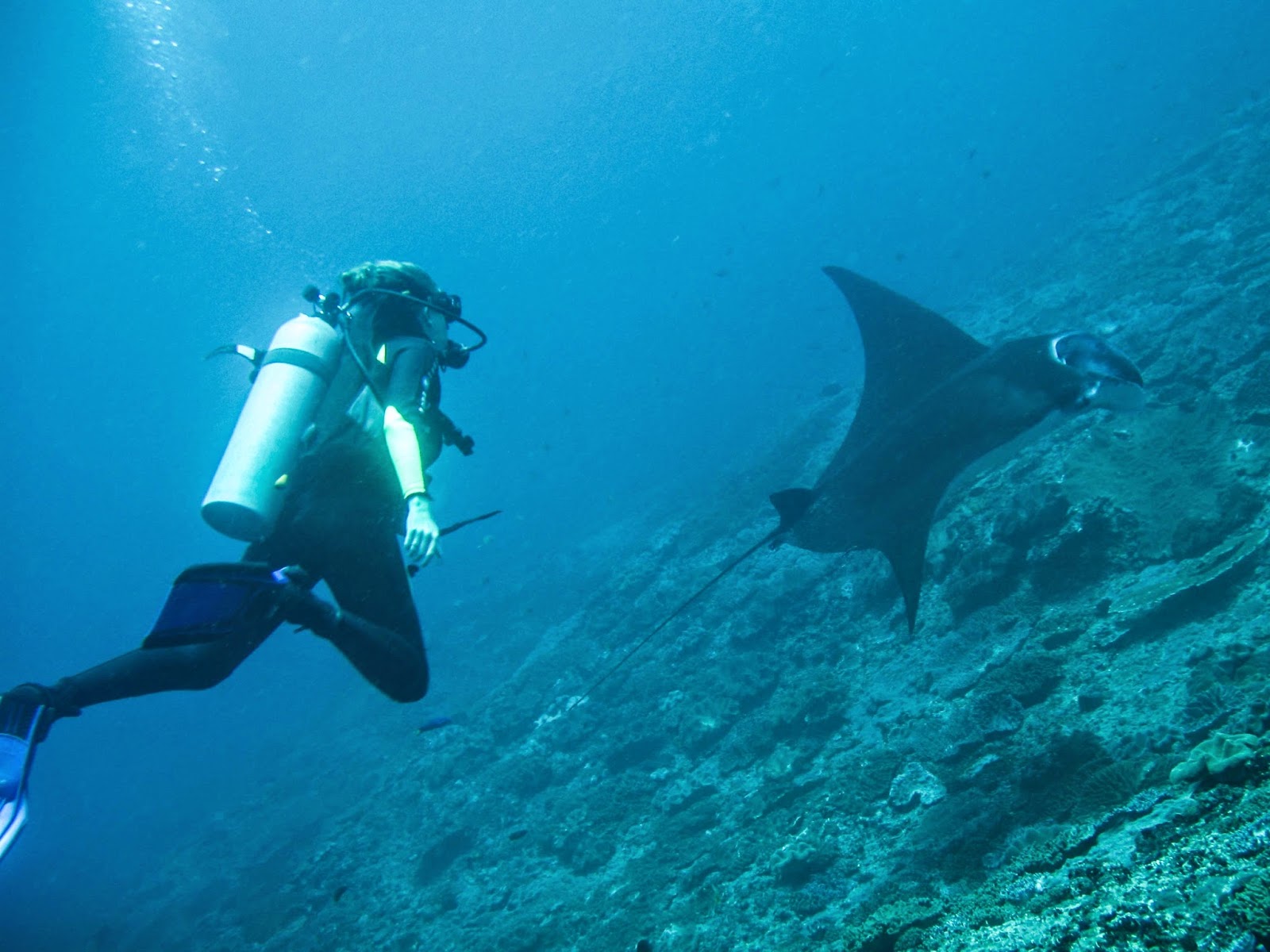 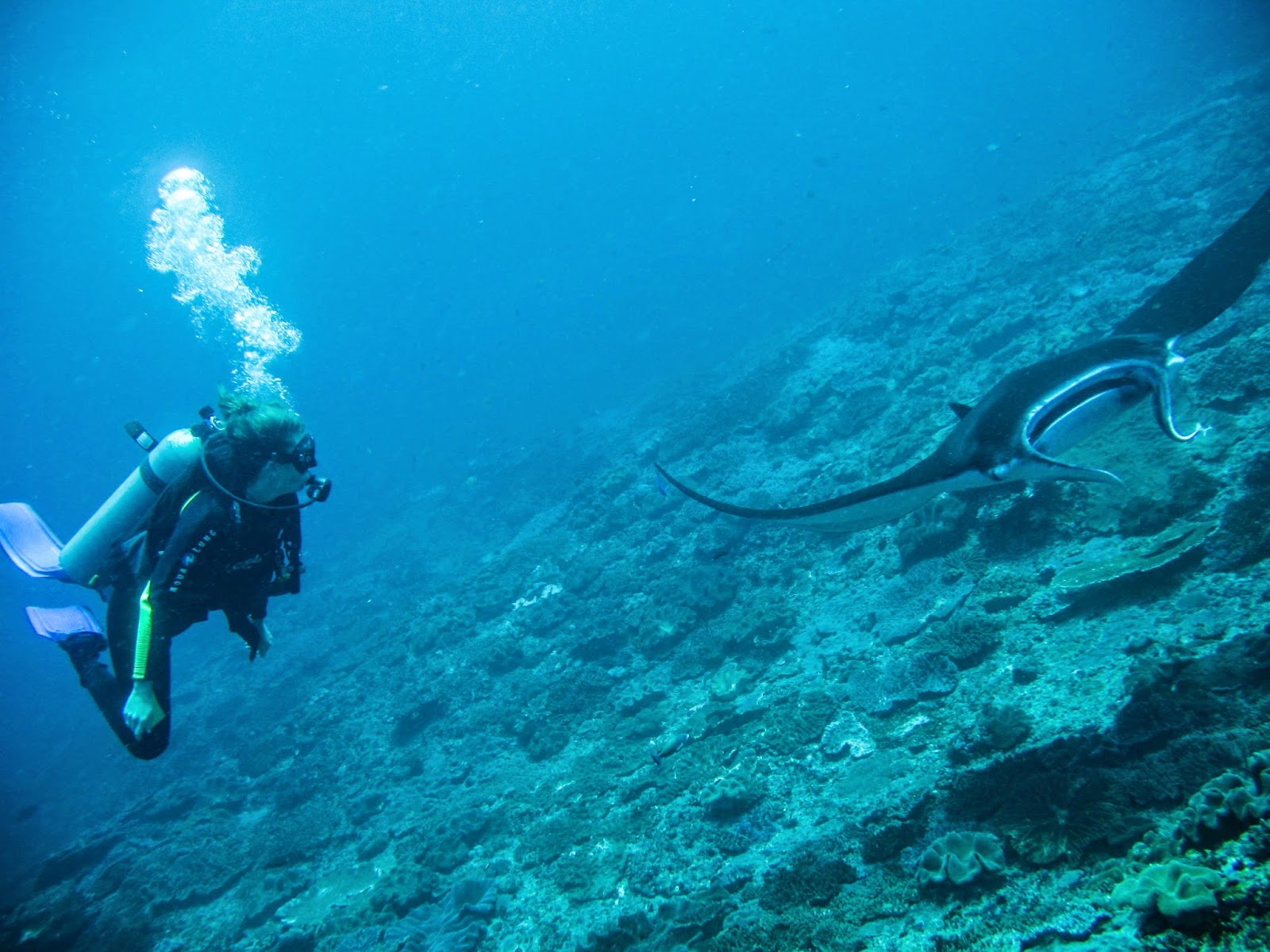 Our second dive site was in a different location than the one I had gone to with Toto on our previous visit to Manta Point, this one called Toya Pakah.  The site was close to an odd pavilion in the water where Chinese tourists could float around in a penned-in area wearing life jackets and ride banana boats around the water.  It was definitely a strange sight!

The dive itself was a drift dive, but with a slower current than our third dive would be.  We descended through a curtain of small, colorful fish, and I found myself (again) wishing I had a camera to capture some of the sights myself.  We saw a lot of coral, a couple of moray eels, bannerfish and angel fish, some with electric blue outlines, clown triggerfish with their giant white spots, nemo-ish fish, but none of the really big guys the guides had been looking for, like molas or dolphins or turtles.  The last part of the dive had even less current and more sandy-bottomed areas, but there were corals dotted about, and we saw one colorful nudibranch before ascending.

We took a lunch break in between our second and third dives, as I sat on the top deck of the boat with João, soaking up the warm sun and relaxing a bit.  The third and final dive was at the same spot at Blue Corner where I had done my drift dive for my advanced course.  Just before we descended, as we were preparing on the boat, we spotted a pod of dolphins swimming along the surface.  Unfortunately, that was the closest we would come to the dolphins this trip, not spotting any once we got under the water.  We did however, see a large bamboo shark, which I excitedly pointed out to Toto.  We also saw a very large barracuda and another clown triggerfish.  We swam right along the shelf, through blasts of very cold water, but we never did see any molas. 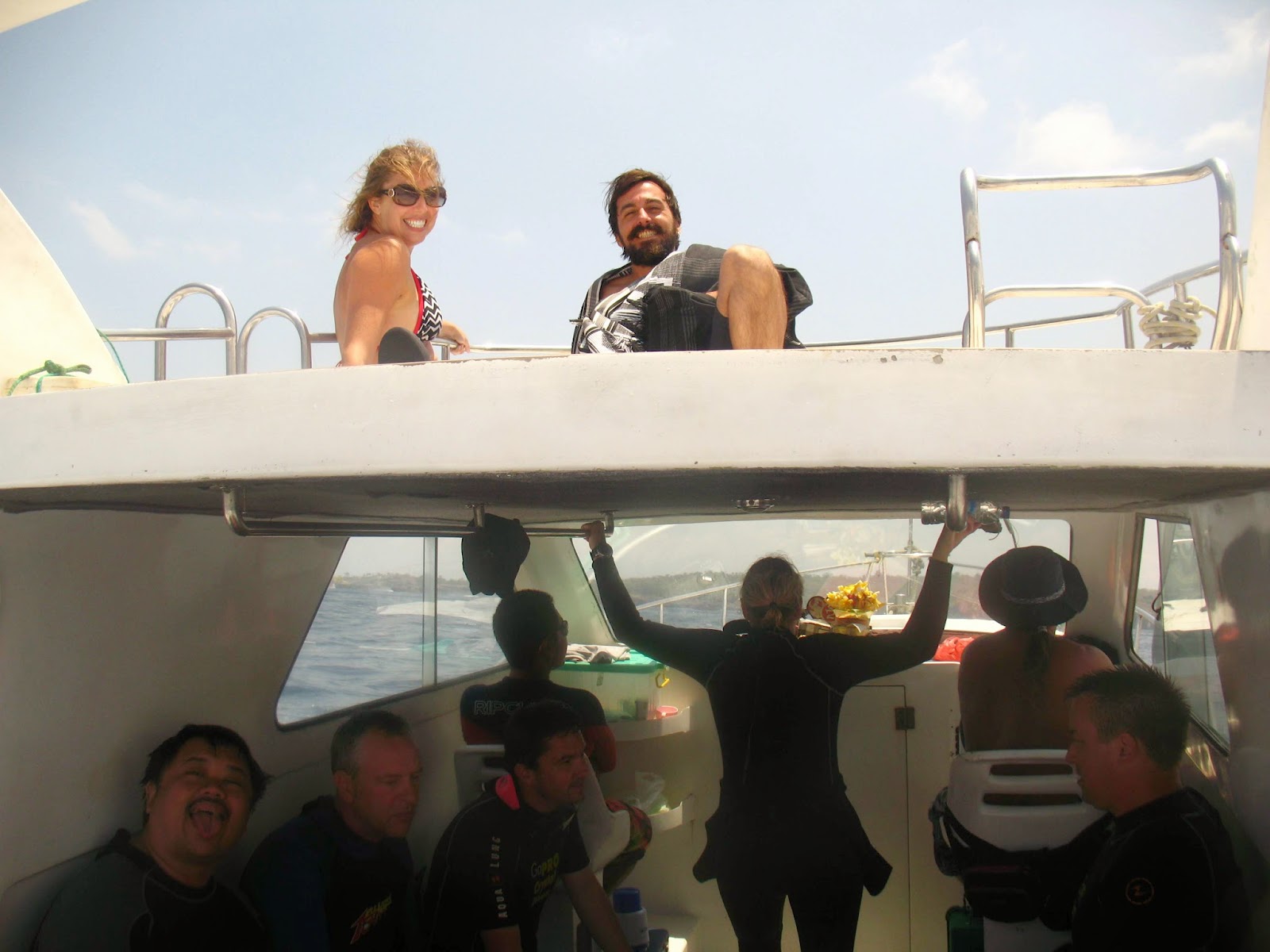 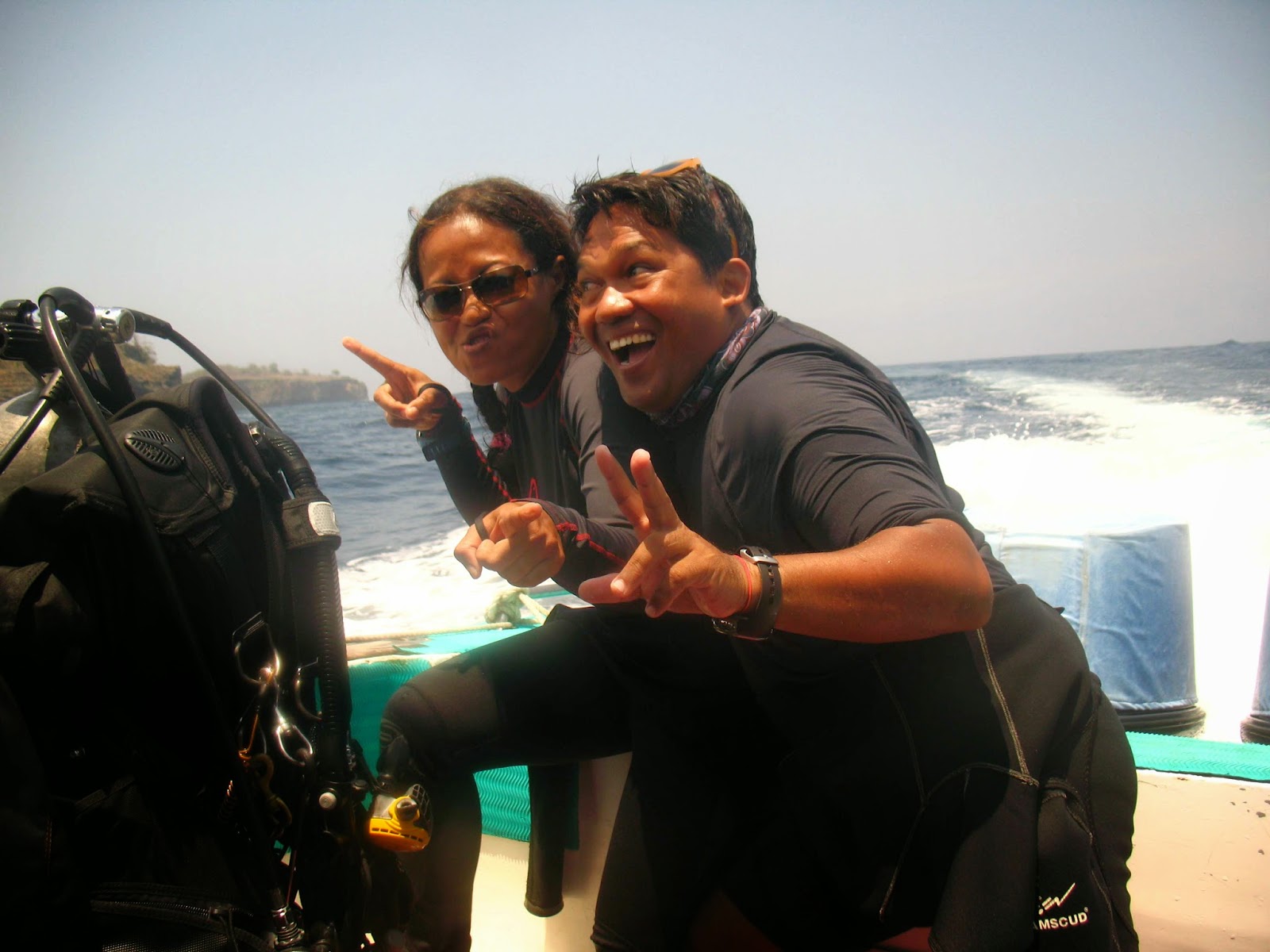 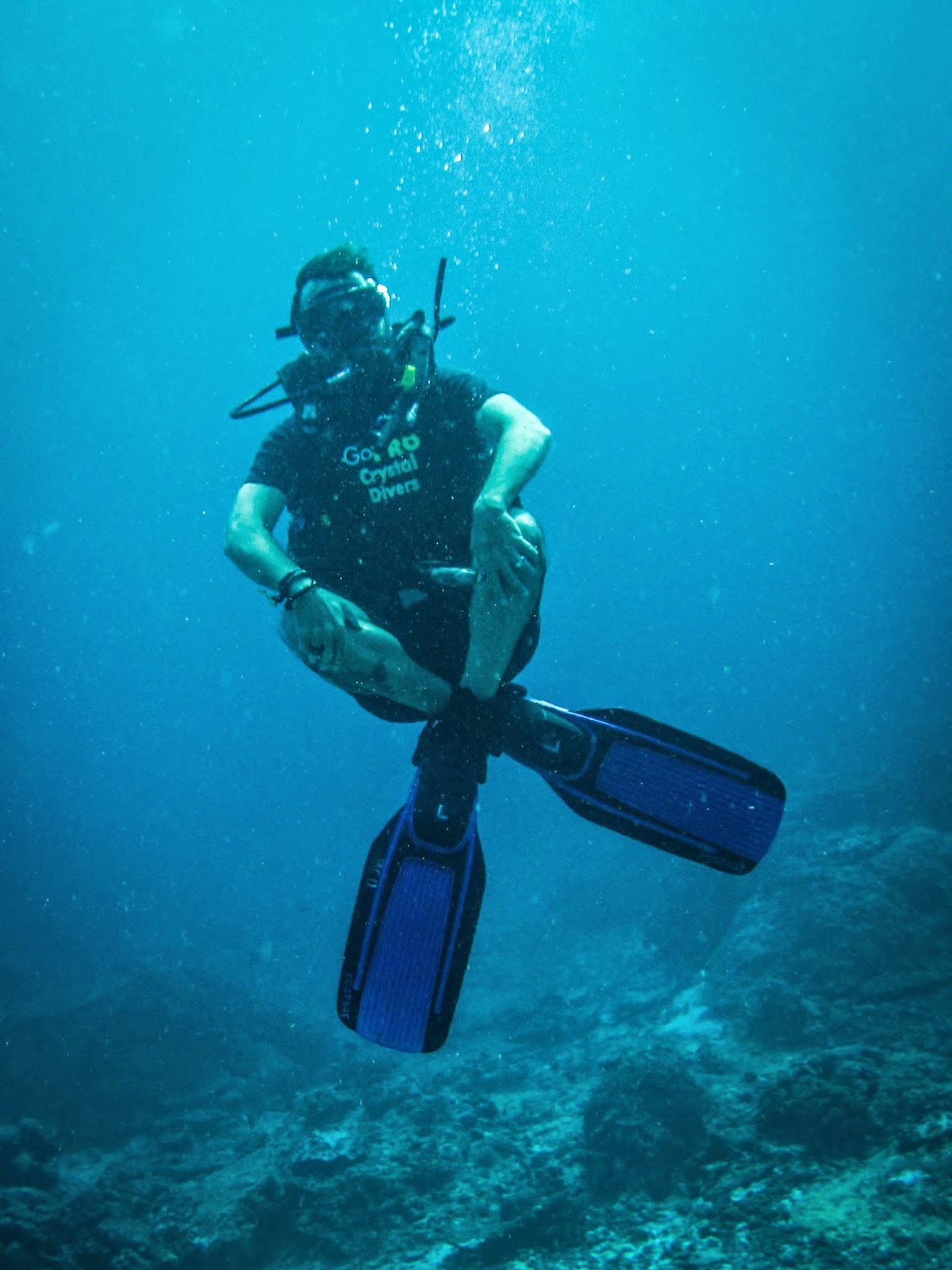 Over our entire diving experience, we really couldn't have asked for better instructors, as the two of us worked with Toto, Amin, and Uning over the course of all our dives, and they took care to ensure we had a truly incredible experience.  Between Toto's infectious laugh and magic tricks under the water, and Uning's caring smile and calming energy, we truly were well taken care of.  And the ocean itself was pretty magical as well.

The following day would be João's last in Indonesia, and after the excitement of the previous day's dive trip, we spent most of his final day relaxing at the beach, swimming and paddling a bit, enjoying coffee, and walking along the sand.  That evening, we got dressed up and returned to Three Monkeys, sitting upstairs next to the wide fronds of a group of trees.  We drank sparkling wine and ordered appetizers of fried ravioli and grilled asparagus, then shared entrees of chicken satay and a phenomenal tuna steak, as I fought back tears that these incredible three weeks in paradise were about to come to an end. 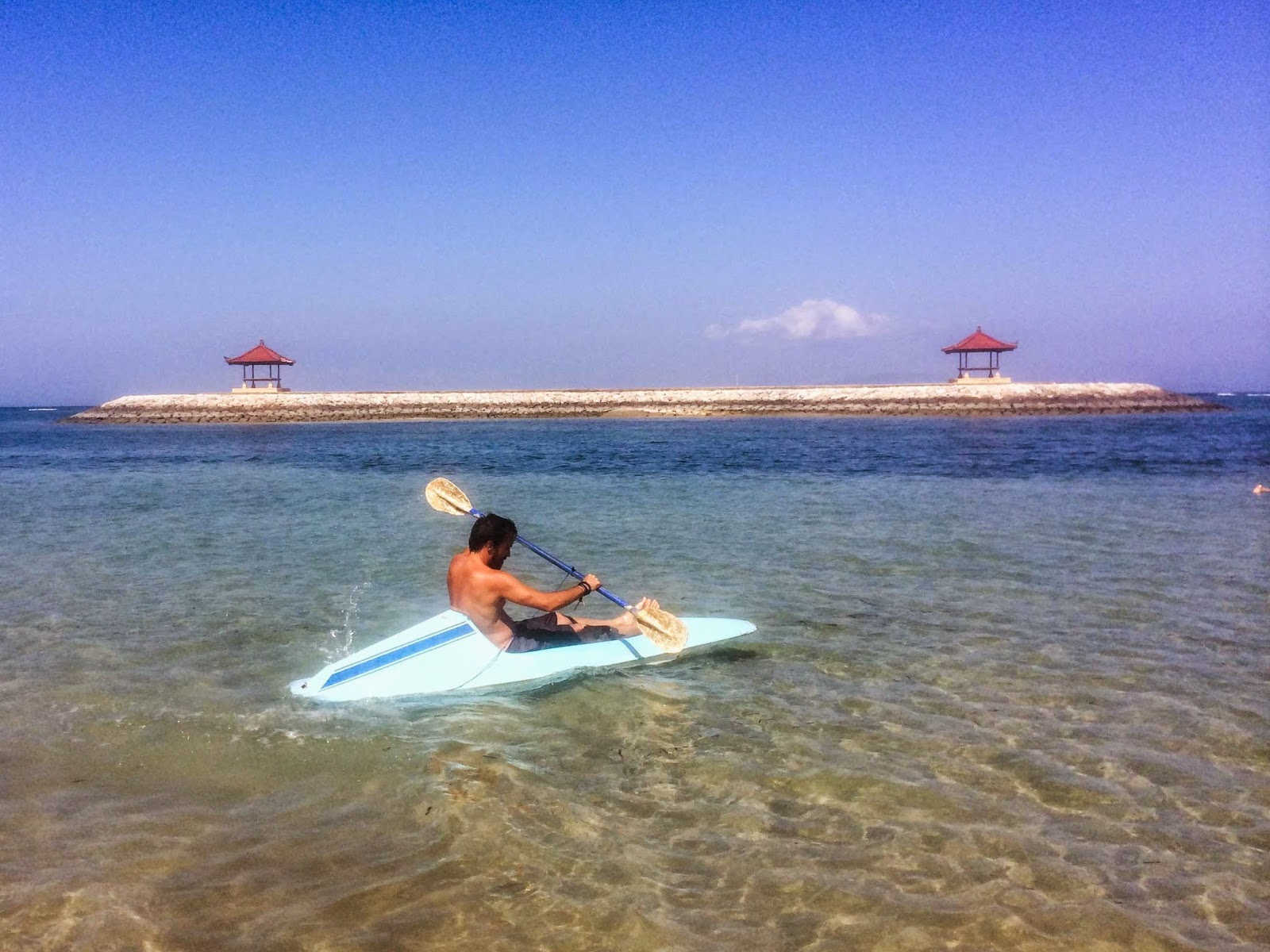 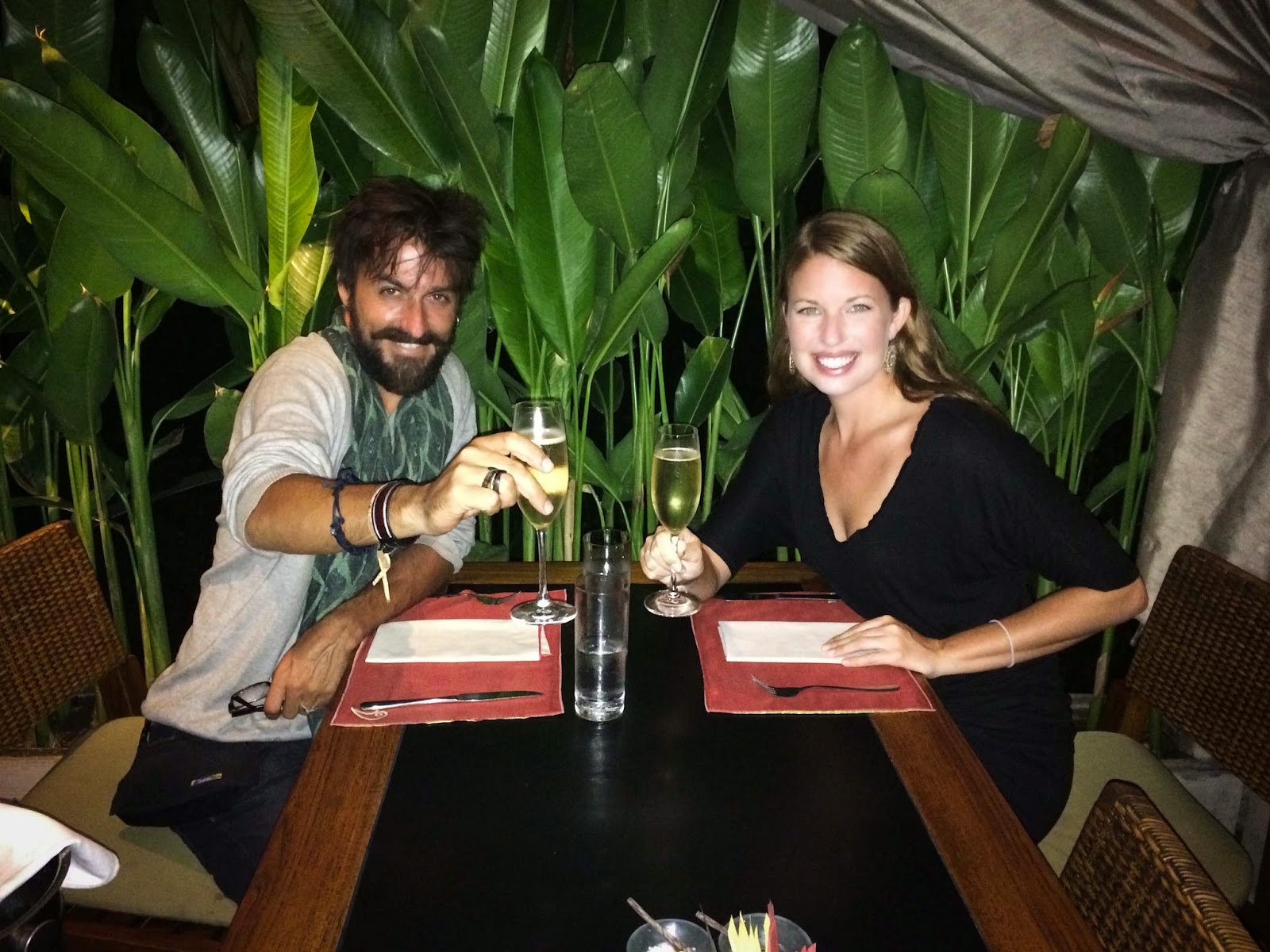 The next morning, we thankfully had some time to wake slowly and give João a chance to pack before spending a couple of hours at the beach for one last time.  We shared a taxi out to the airport, then sat at a restaurant just outside security for a quick bite before having to say farewell for another few months.  I was a complete mess, but João just smiled.  The last time we had said goodbye in an airport, we weren't really sure what the future would hold for us - when and really if we would see each other again.  This time, we were both certain, and we knew almost exactly when we would be reunited, as he planned to come to the States just after my return.

But in a strange role reversal, I was the one being left behind, returning to a place that would suddenly seem strange and empty without him there.  Despite remaining in paradise, I felt like I was missing a piece of me, and the place was suddenly quieter now that I no longer had the person with me I had been sharing it with.  I'm glad I stayed another couple of nights though.  I was in no mood to keep moving, and while the room felt empty, it did feel familiar.

The next day, I researched and bought a flight for what would be my next stop - Yogyakarta - departing the following morning.  I spent half the day running errands, then relaxed on the beach, had some ice cream, got a massage and a pedicure, and picked up some gorgeous Balinese fabrics - basically treating myself as much as possible.  The next morning I awoke at an absurd hour - the sweet staff at Laghawa knocked on my door to ensure I was awake and even prepared a small takeaway breakfast for me - and ventured out to the airport for the short flight to Yogyakarta on the Indonesian island of Java.  I hated to say farewell to such an incredible, beautiful, friendly place as Bali.  But, as with every stop on this journey, it was time to move on... though I have no doubt that I'll return one day.  That we will return together one day. 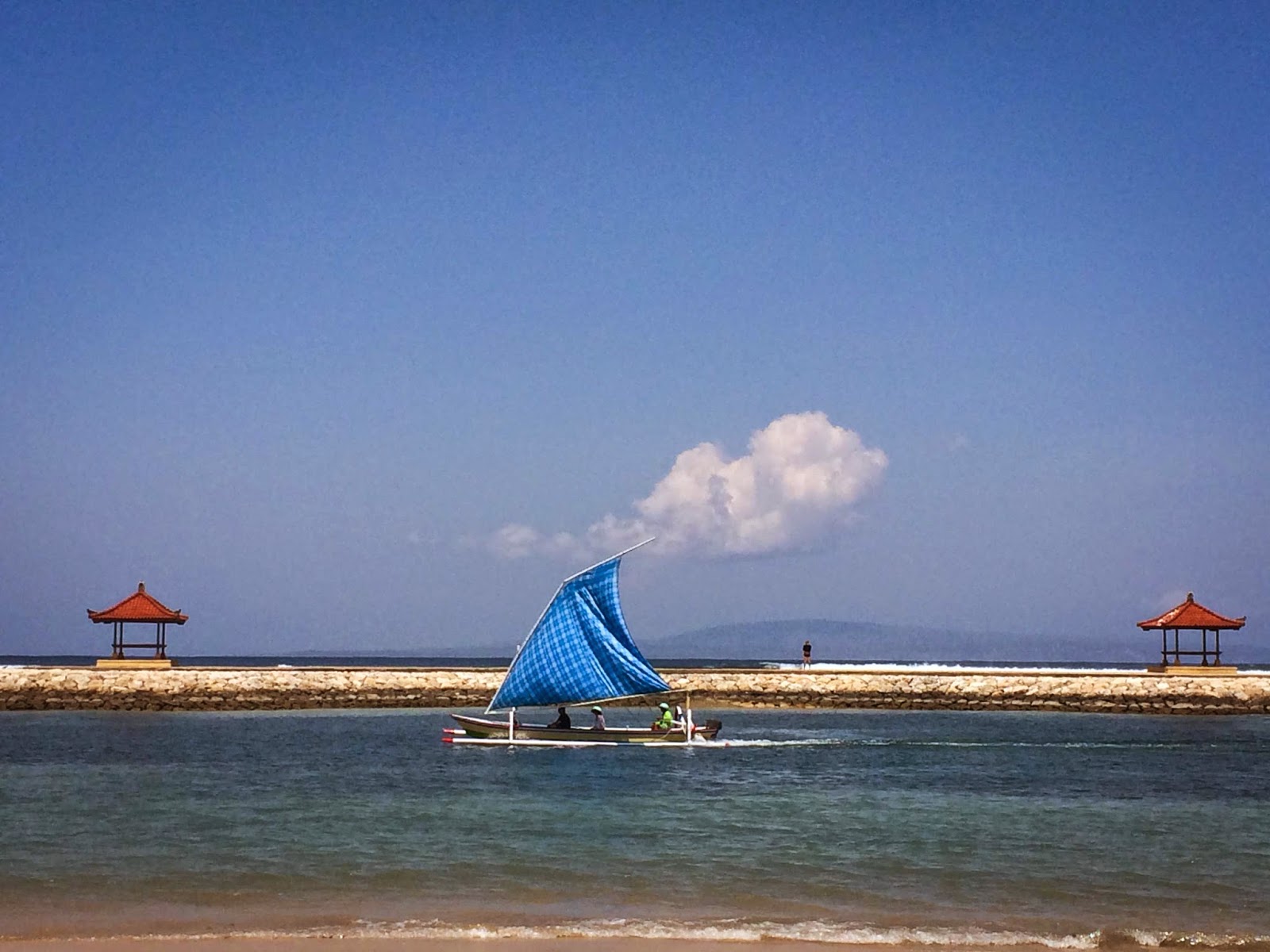 Posted by Outlander Abroad at 1:50 PM