We didn't exactly have a plan for Ubud - just as we didn't for Sanur - and I quickly flipped through pages of my Lonely Planet as the driver we had hired from our hotel guided us past bright green rice fields and narrow, winding roads.  We wound up at a spot called Santra Putra, after our driver had made some calls on our behalf based on Lonely Planet recommendations.  A lady from the guest house actually met us to retrieve our luggage on her scooter, as the car wouldn't be able to reach the house!  The surroundings were lovely, set in a gorgeous garden and surrounded by quiet rice fields.  It would have been quite nice, but I had a feeling that it wasn't exactly what I wanted, without being entirely sure why.  There was no air conditioning in the room and no breakfast provided, though there was a small kitchenette, but there was also not much around the street in terms of places to find food - it would be a long walk to the city center and most of the town's activities.  Plus, a huge crowd of high school students had booked up all the other rooms, and I wasn't sure how that would turn out!


On a whim, we decided to check out a place closer to the center.  We gathered our things, walked down a narrow road and a steep set of stairs until we reached the actual roadway, where we caught a taxi as far as the market.  Our driver mentioned a spot right in the middle of the market called Sania's House Bungalows, so we decided to take our chances.  We lucked out - the place was a small oasis, with air con and a private porch at each room, and a gorgeous courtyard space with intricate carvings and stonework typical of Indonesian homes.  The property itself felt like it bled over into an actual house - most likely the family of the owners and the workers.  There was a small pool that we never used, breakfast was brought to us daily on our small private porch, and it was only 450,000 rupiah (about $35) per night.

Once we were settled in, we went out to explore and find dinner, surprised that the bustling market was closed and quiet now that it was dark.  We wound up at a spot called Nomad, where we shared an outstanding meal of six typical Indonesian offerings served as tapas, as well as a tuna steak entree that was cooked to perfection.  We finished up the night with our favorite sweet treat, Gelato Secrets. 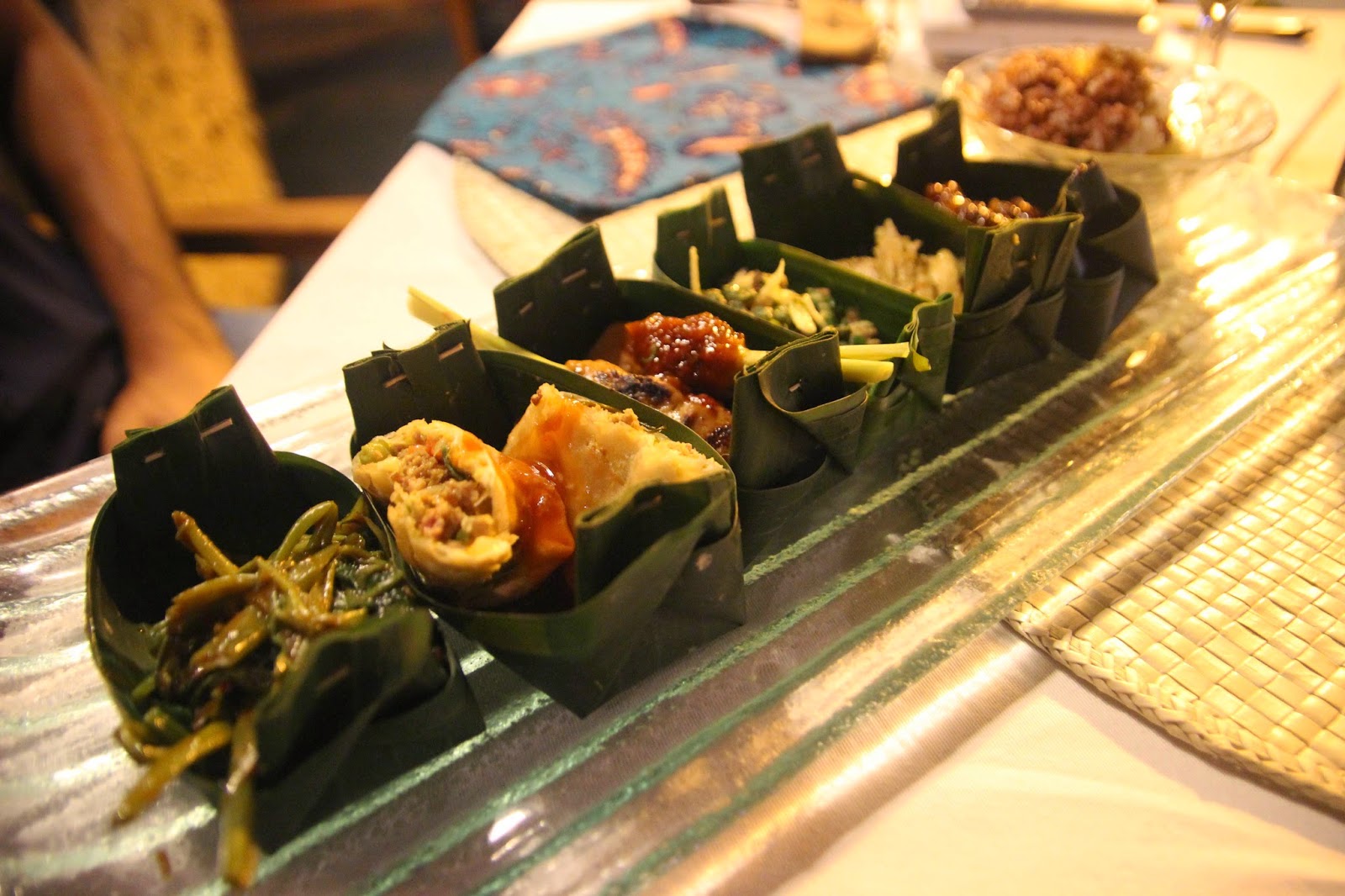 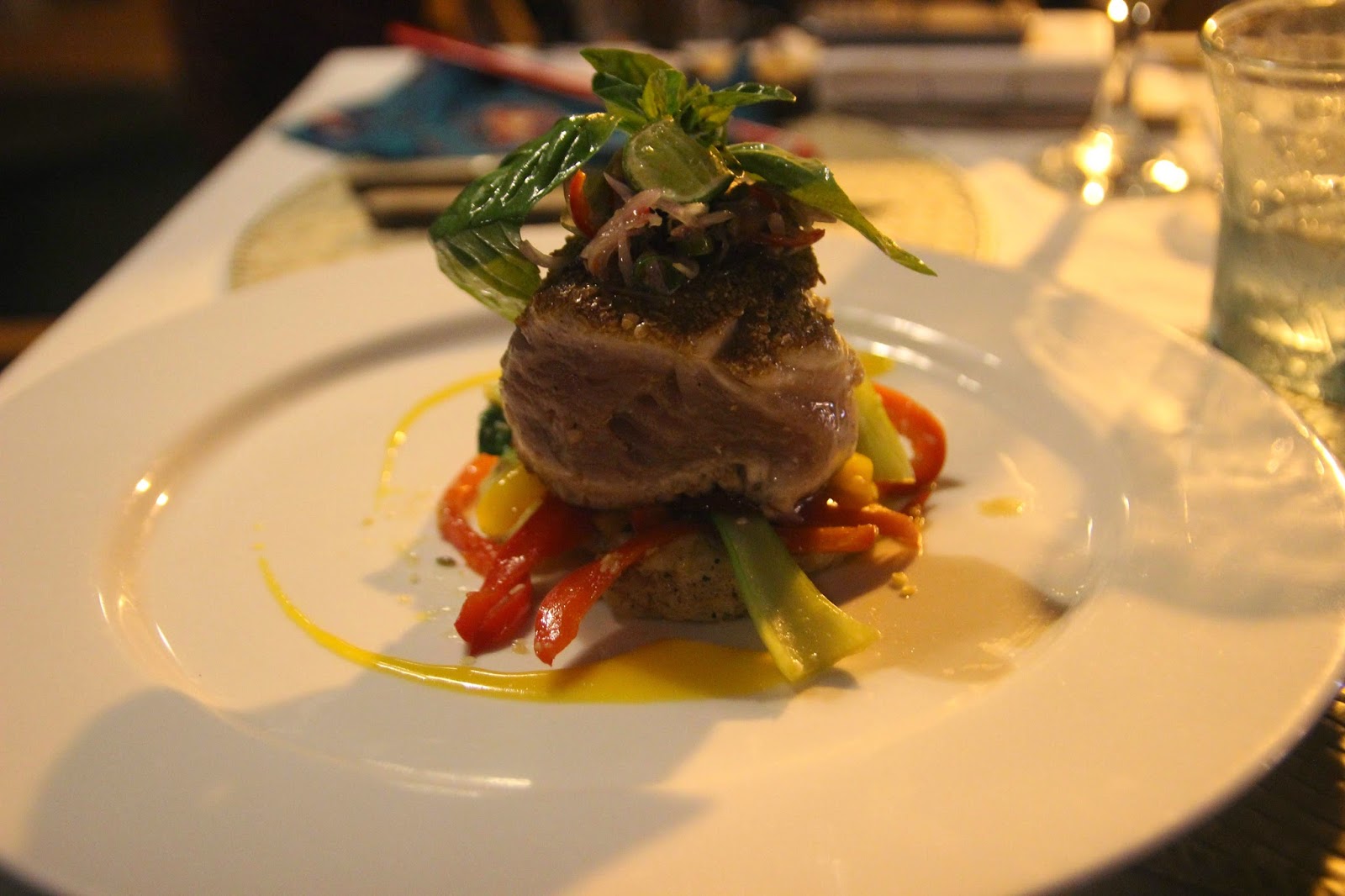 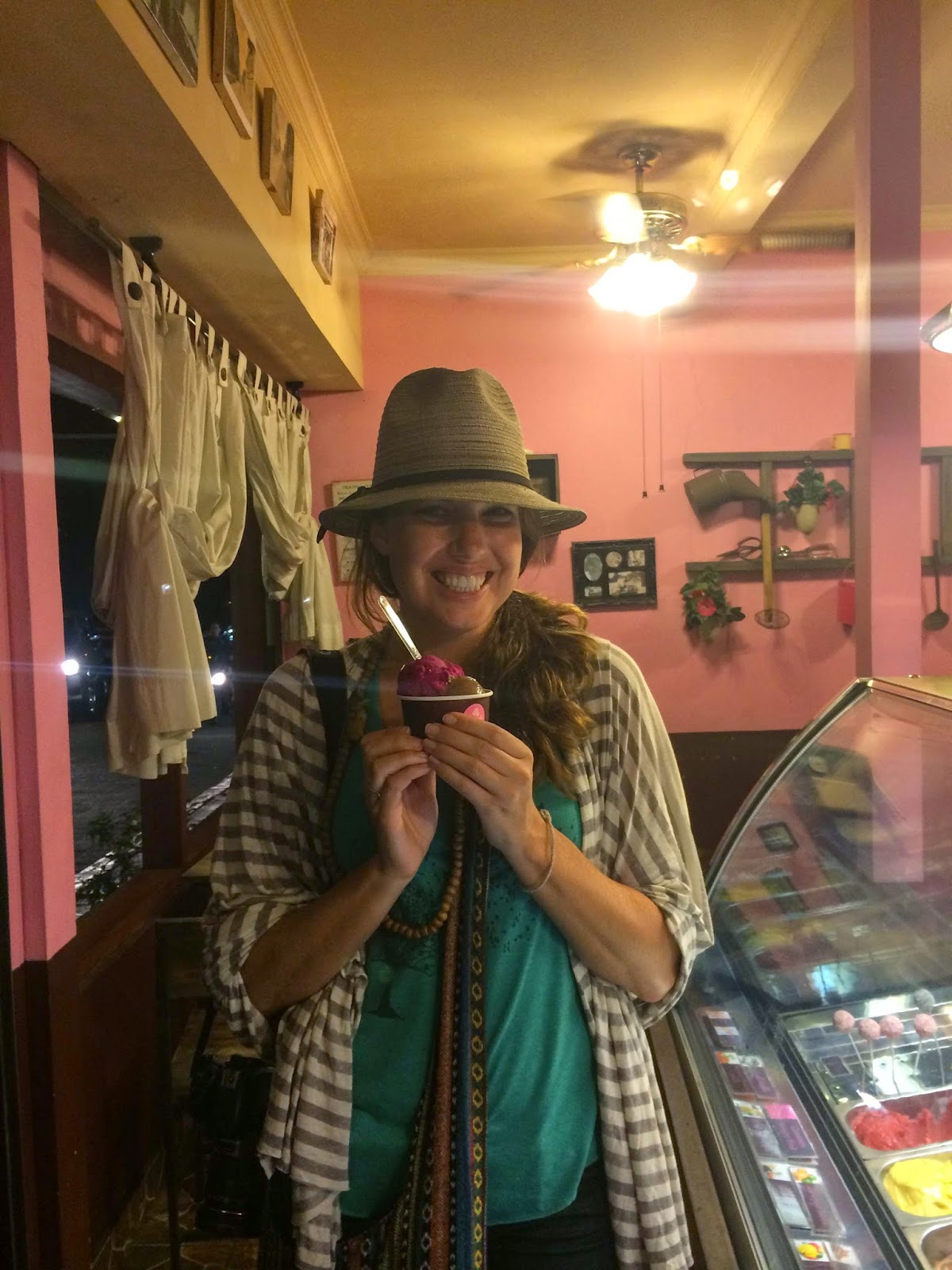 The next morning we took care of a few things and spent some time at Anomali Coffee for food and caffeine.  Unfortunately, João's ear had been bothering him ever since we finished our dives in Sanur. While we had tried to treat it with some basic drops,  it was hurting him enough that we finally ventured out to a local clinic later that afternoon.  Sure enough, the staff doctor said his ear was incredibly inflamed, and she prescribed a whole mess of medications that thankfully helped him begin to feel better right away. 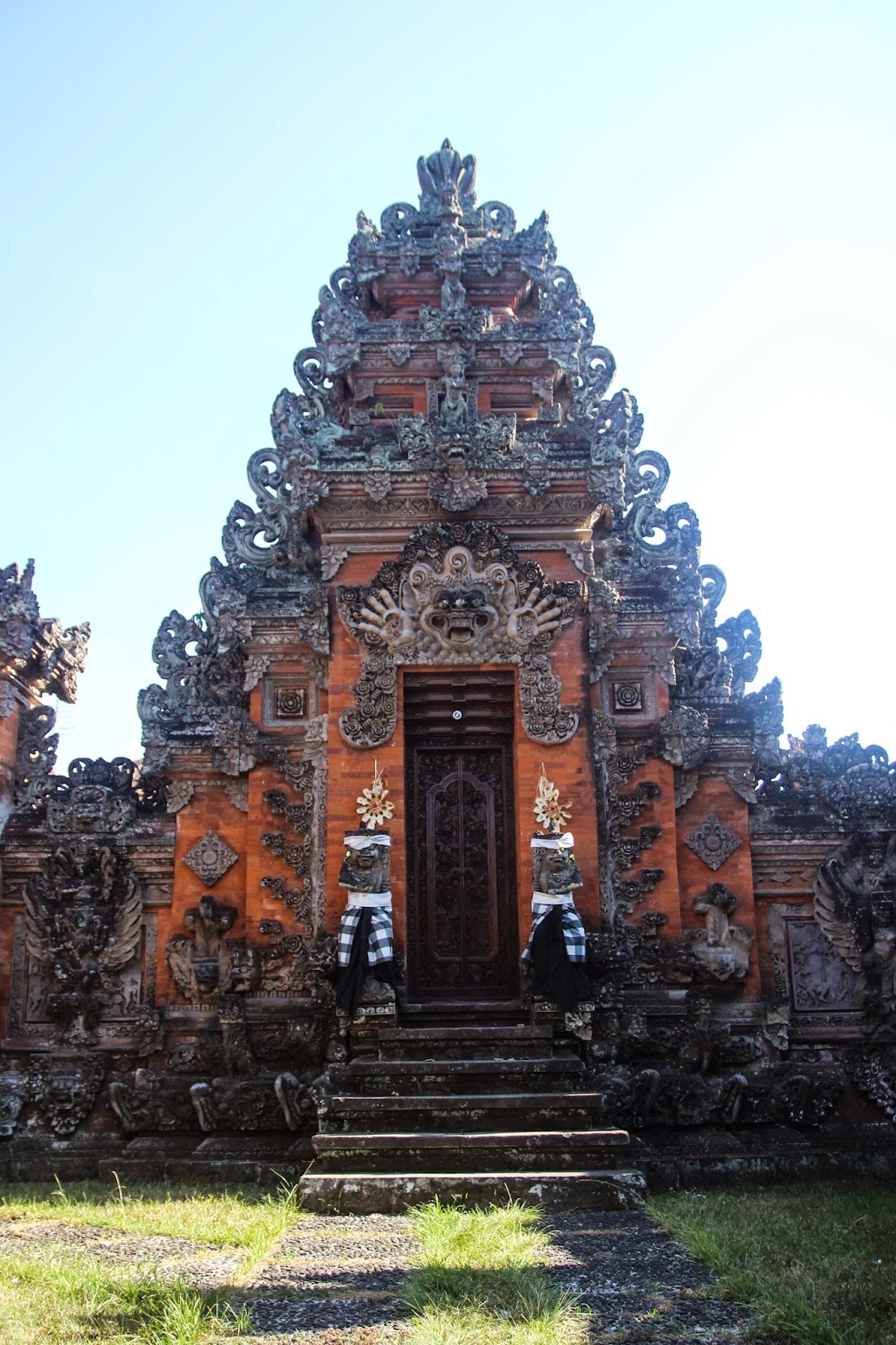 As we walked back to the center of town from the clinic, we reached the Water Temple, where men stood outside selling tickets to a dance performance that was just about to begin.  We took a chance and bought a ticket to the performance.  While definitely an activity for the tourists, the dances we would catch during our time in Ubud would be some of our favorite - getting a glimpse into Balinesian culture and seeing the traditional stories acted out in front of us in vivid detail.  I'm saving those photos for a special photoessay - next time!

The following morning, we got up and headed straight back to the Water Temple where we had seen the show, in order to see it and the magnificent pool of lotus blossoms in the daylight. 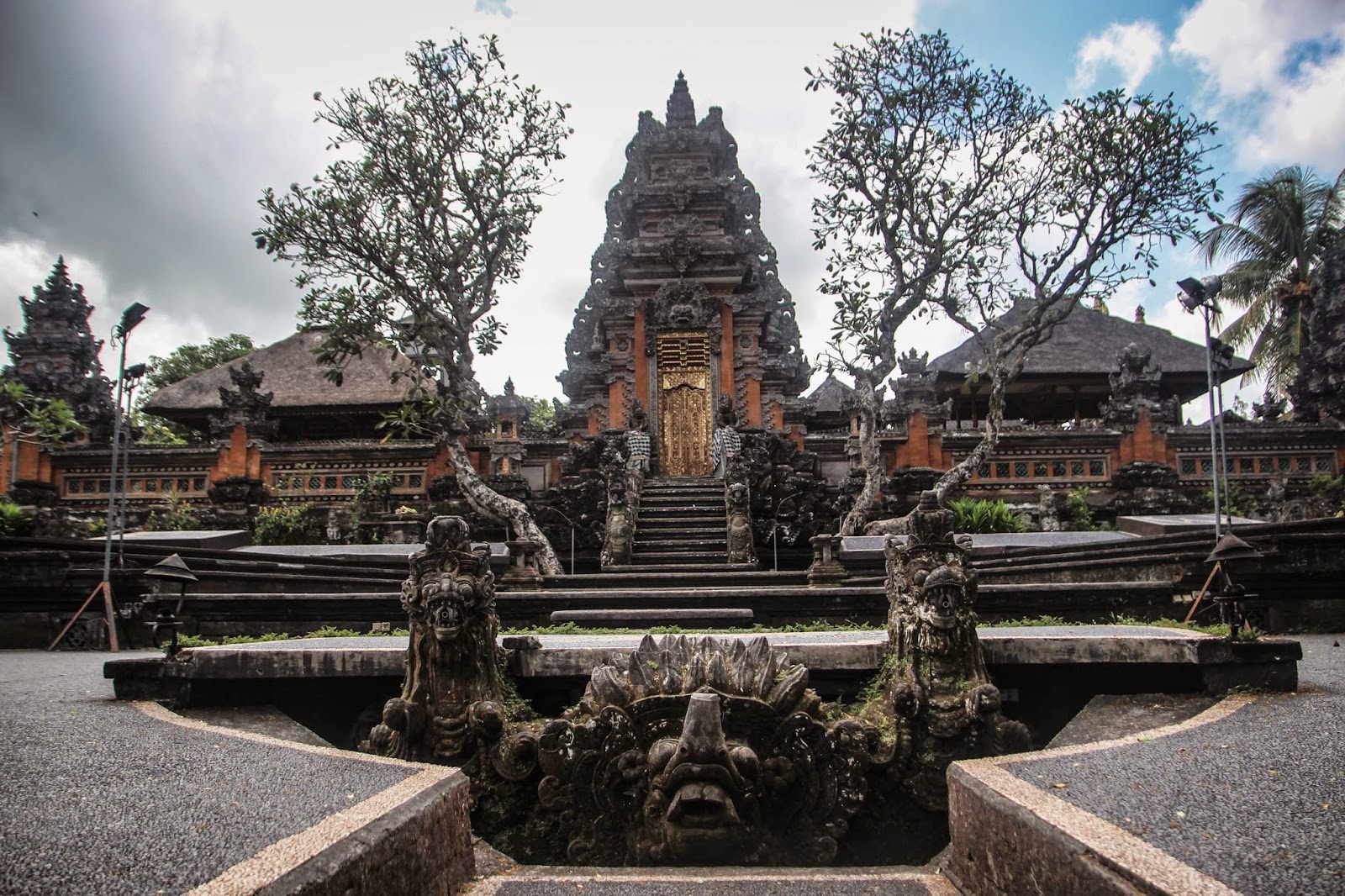 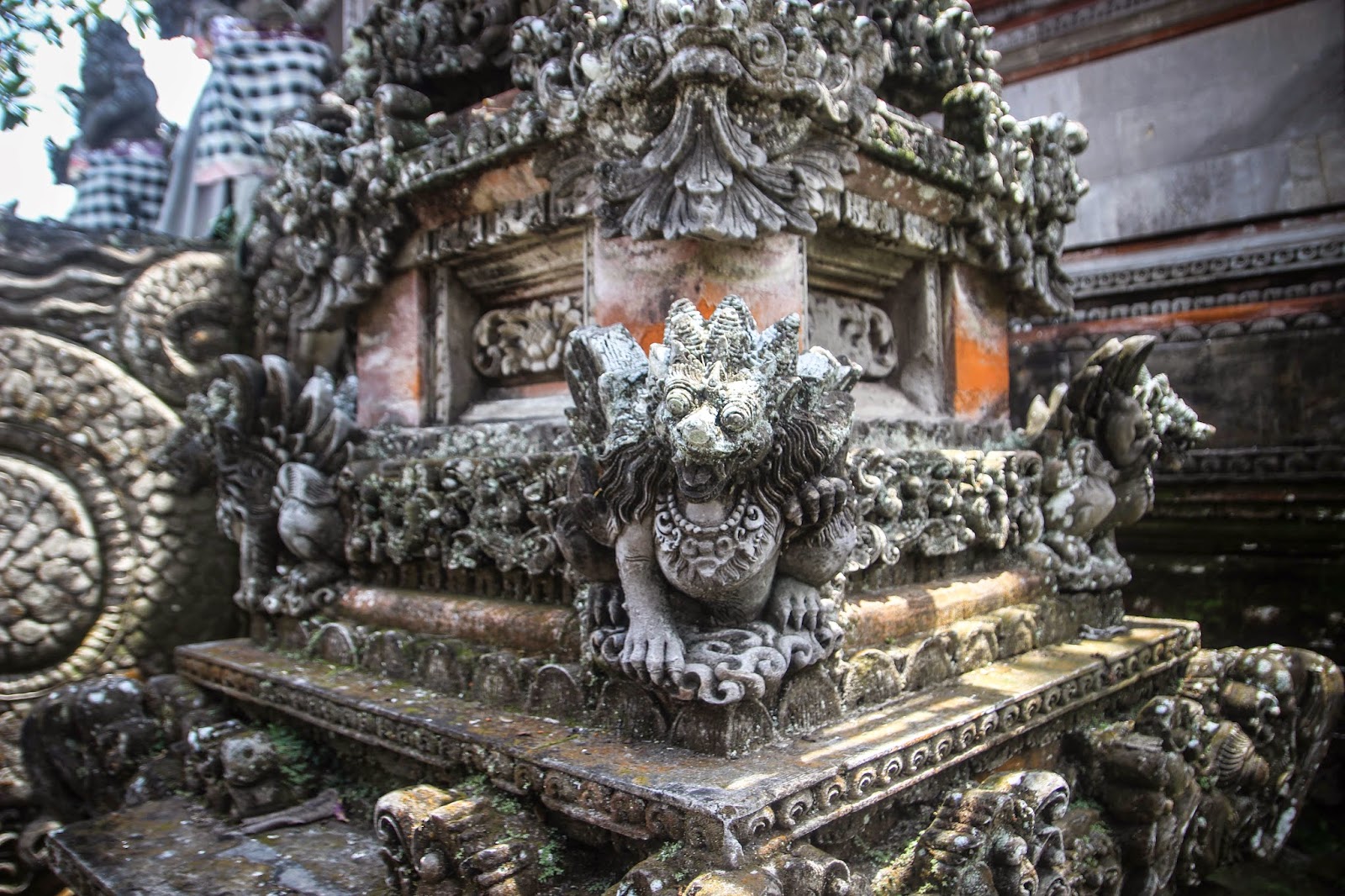 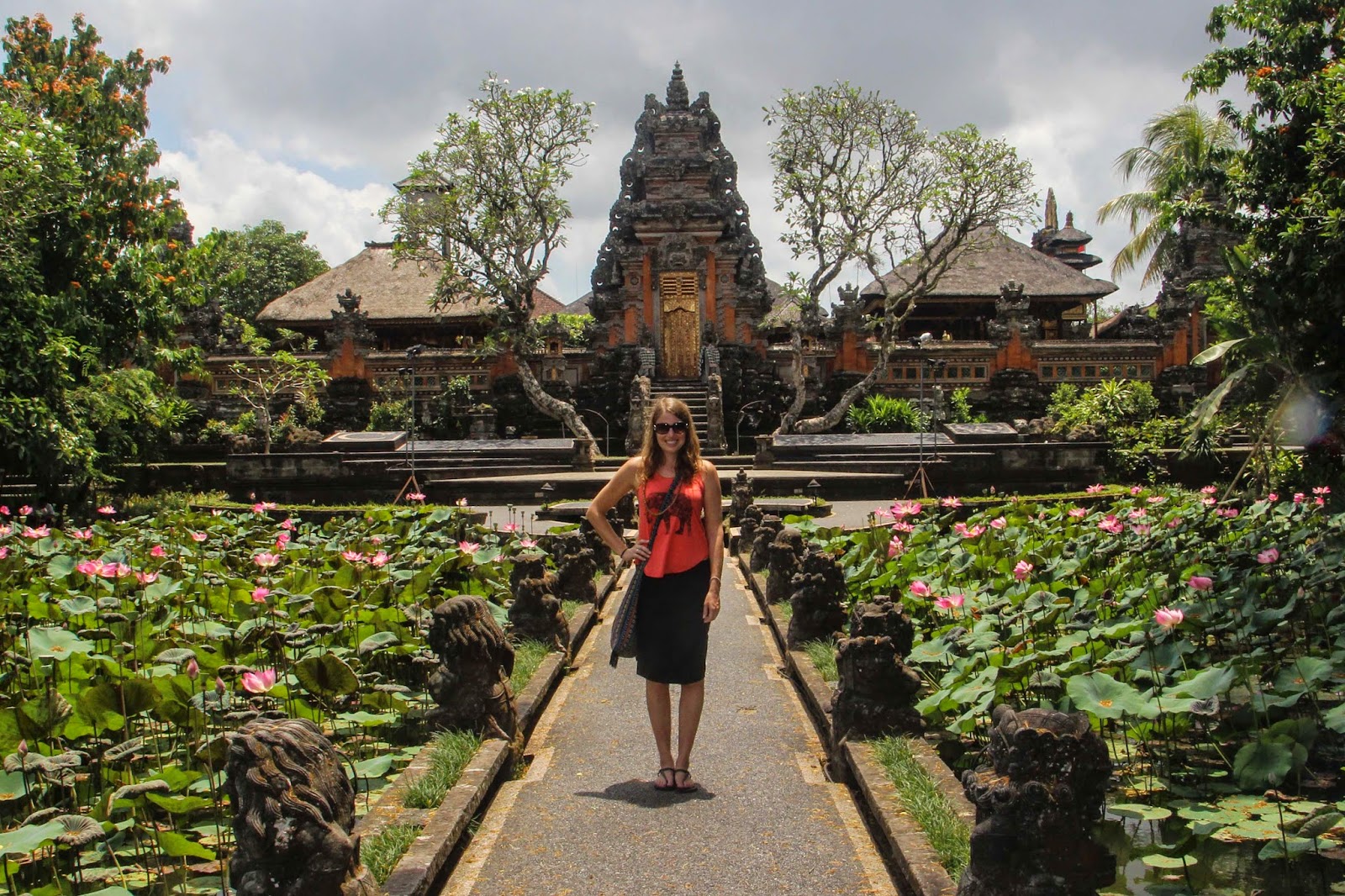 Next, we walked over to the Ubud Palace to explore the grounds. 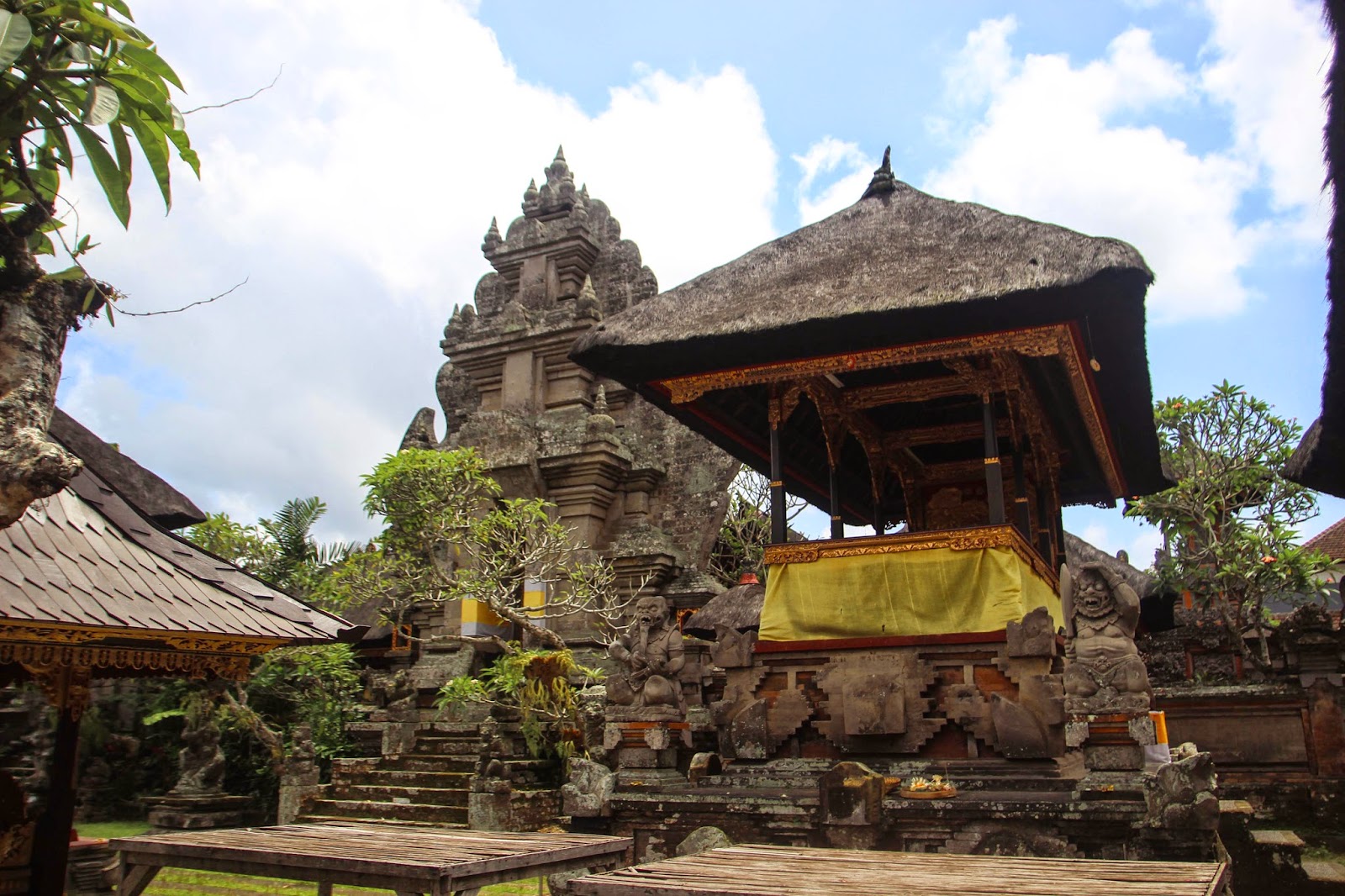 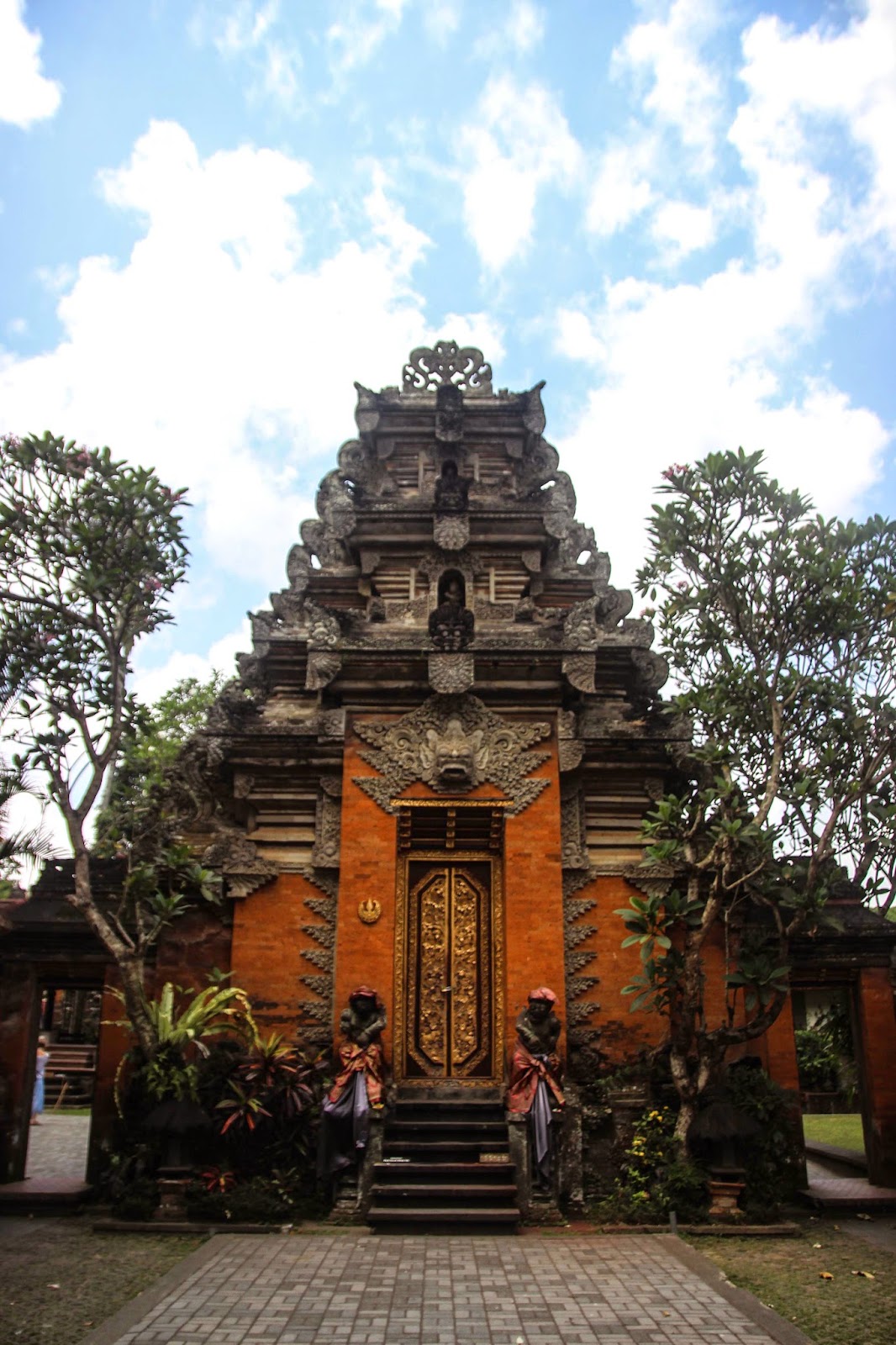 Finally we visited Museum Puri Lukisan, where we spent a good amount of time looking at an exhibit of work by I Gusti Nyoman Lempad, a local artist who painted classic Balinese stories.  Through the descriptions of many of the works, we were able to pick up many of the stories related to the dances we had been seeing, as well as the Balinesian folklore in general.  There was also a little Kama Sutra section which was curtained off as adults-only!  Throughout the exhibit there were also a number of beautifully fluid wood carvings decorating the space, though these were created by another artist. 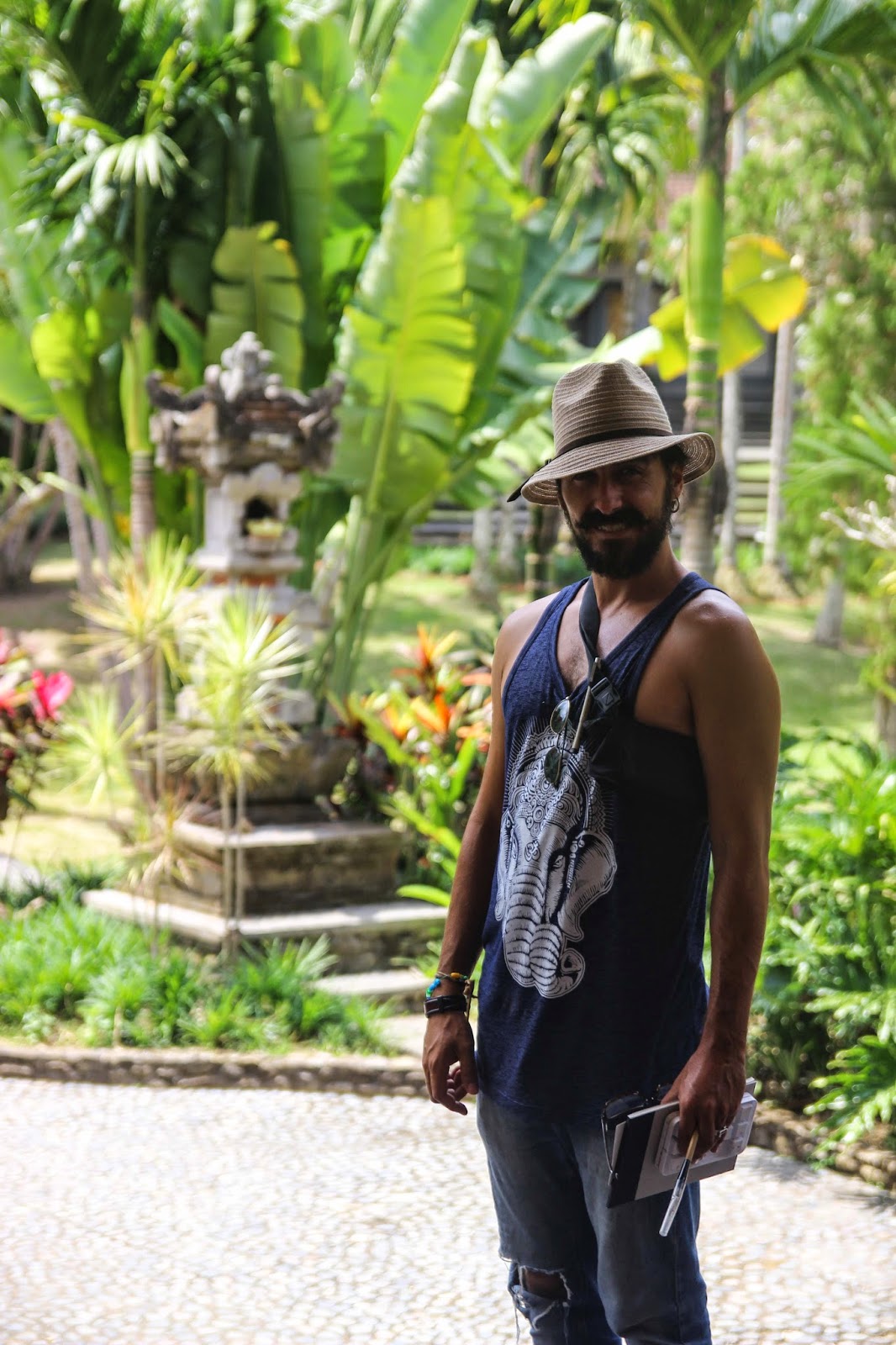 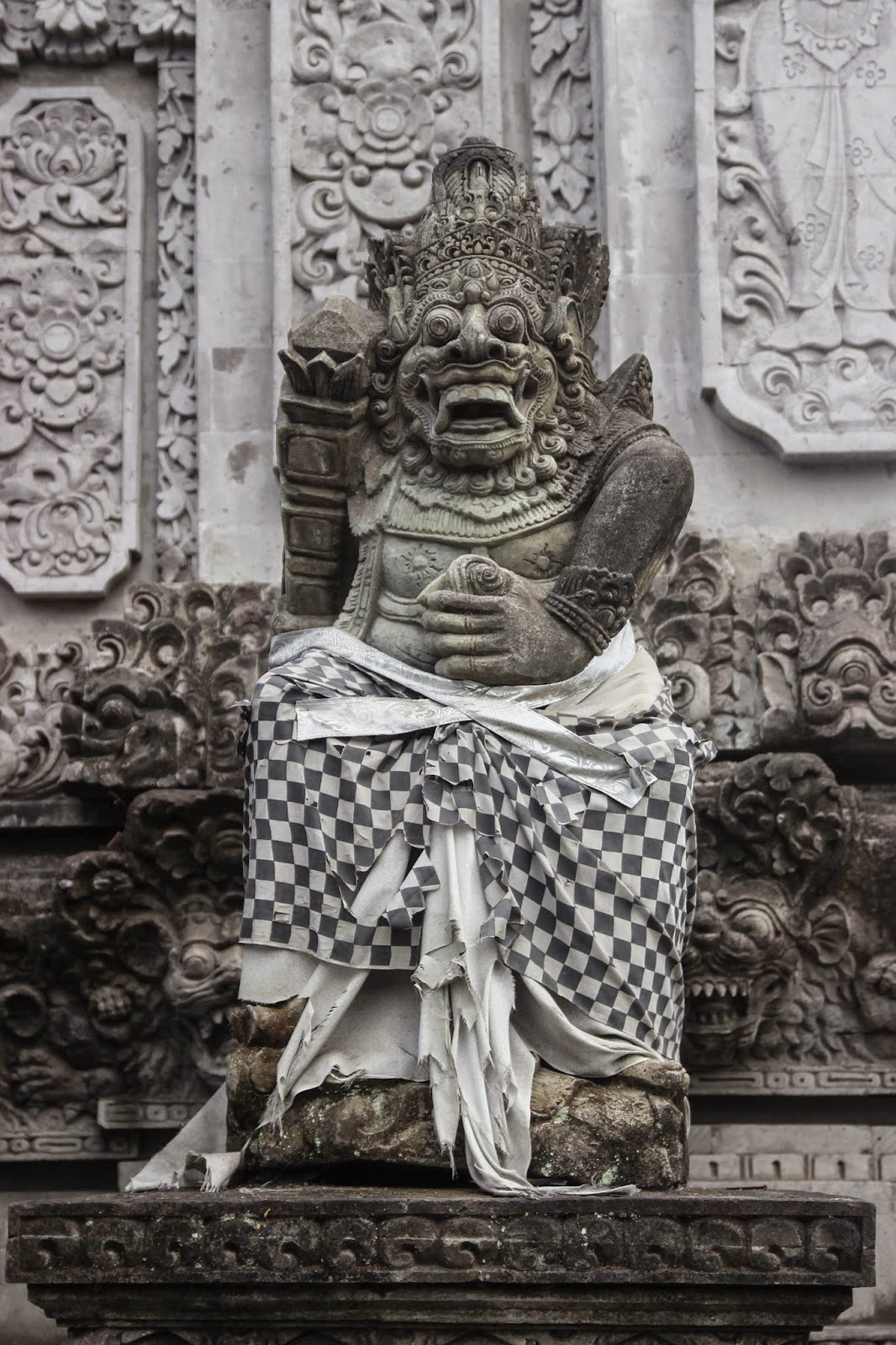 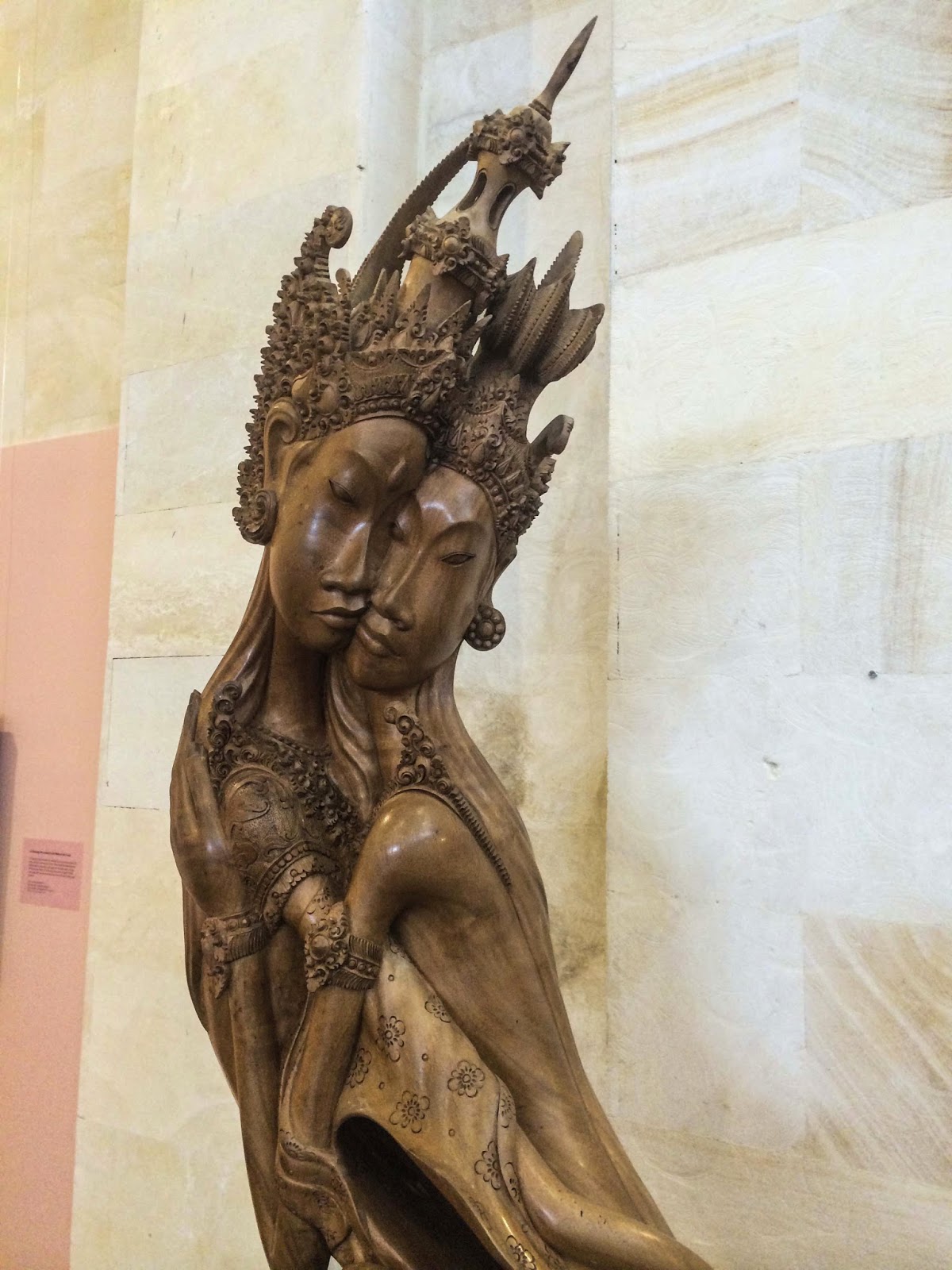 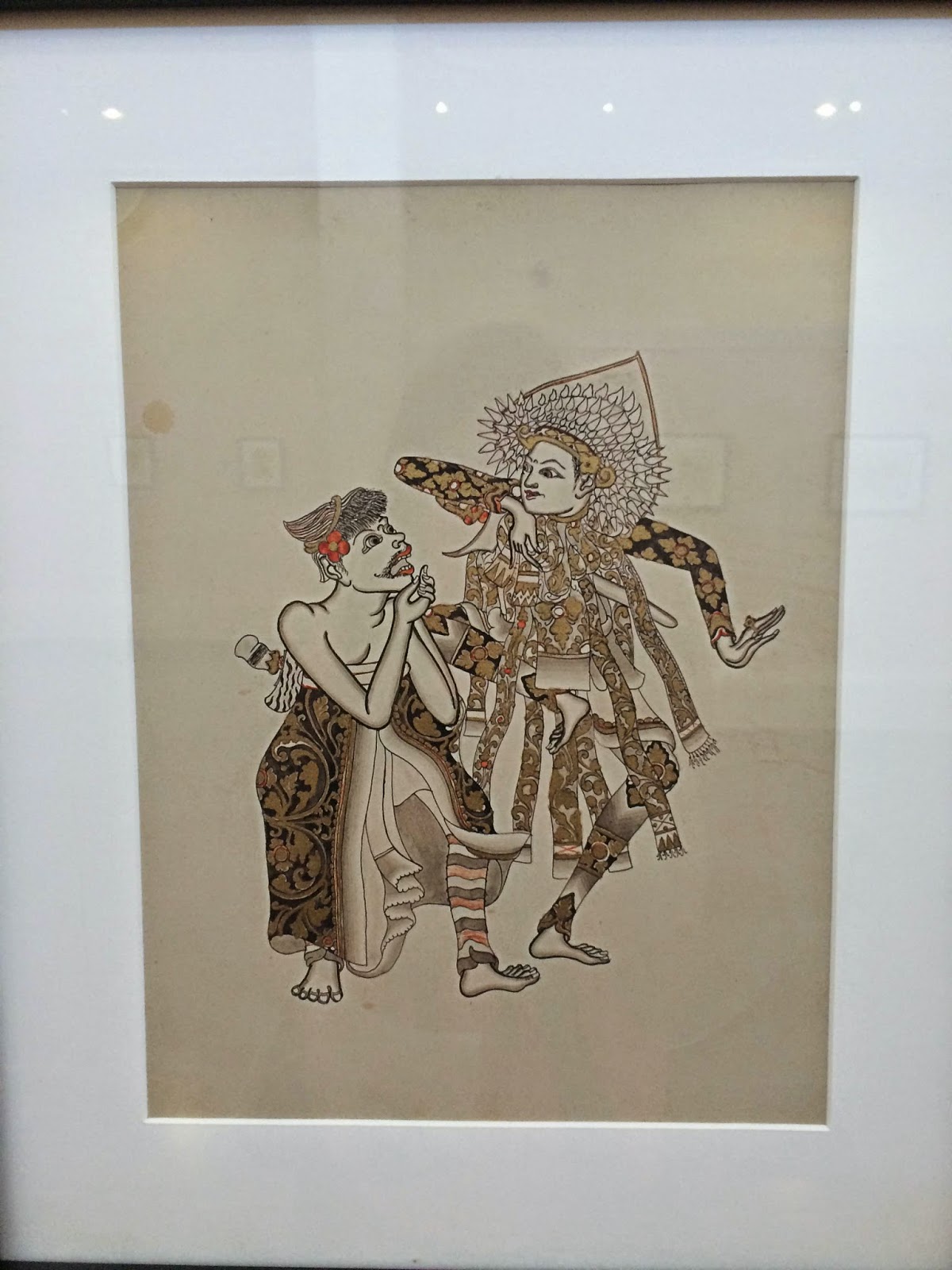 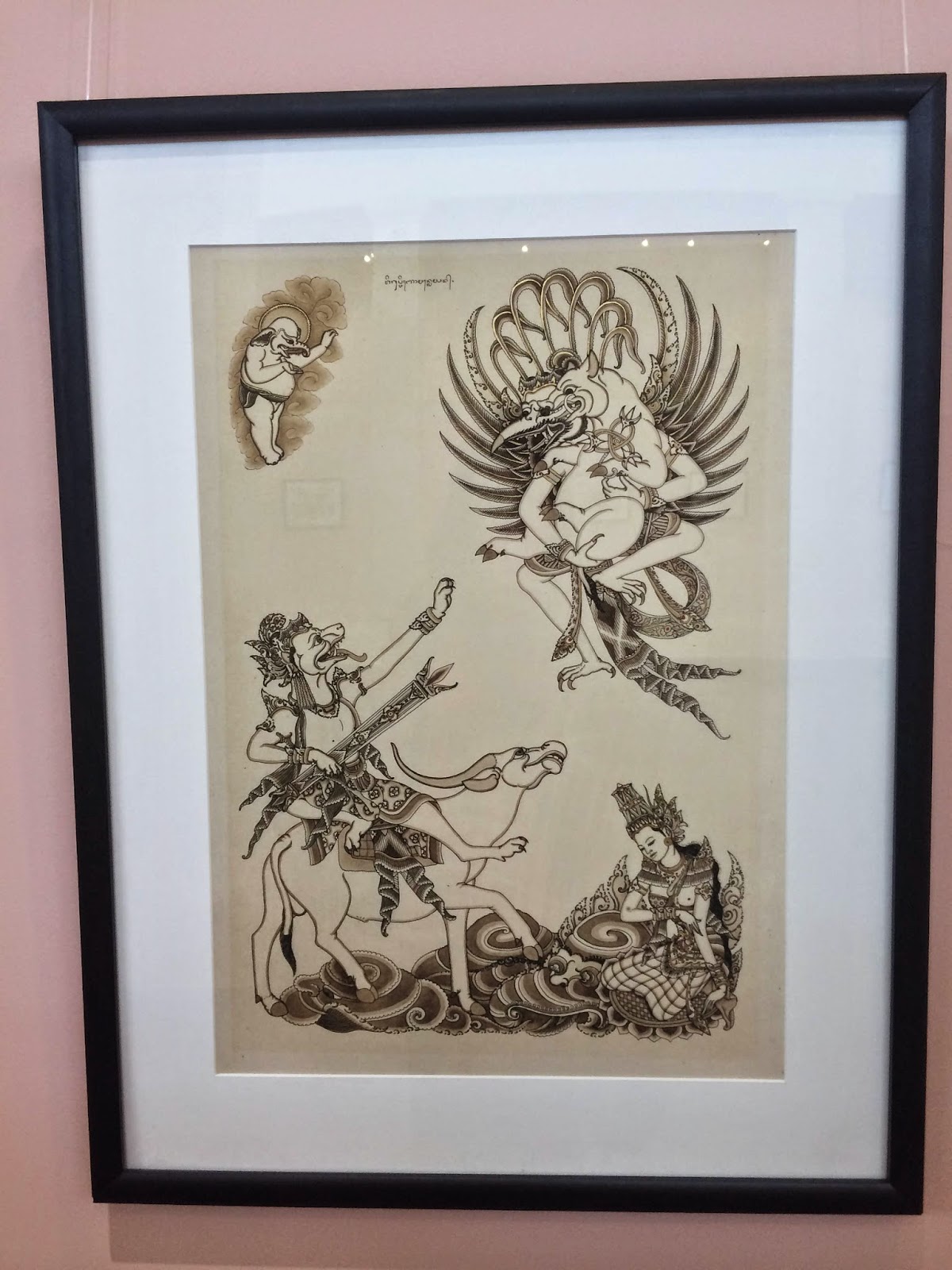 By the time we were finished, I was starving, but we realized there were still two more galleries to see!  We breezed through one of them, full of massive, intricate, colorful paintings of Balinese characters and folklore.  We decided to try and return later for the final gallery, sitting down at nearby Cafe Lotus for lunch.  The chicken and pork satay weren't bad, but the restaurant was clearly banking on their lovely open air patio and view overlooking the lotus pond at the Water Temple.

Next, we walked through the market, where I quickly learned that prices on the typical tourist items - tank tops and flowy pants, various knickknacks - were a bit higher than in other places I had been around Asia, simply due to the influx of Western tourists (thanks in no small part to the success of 'Eat, Pray, Love').  I was able to successfully negotiate prices down a bit as long as I was discreet and didn't disrupt their selling to other tourists, though João was somewhat horrified and amused at my attempts to negotiate on prices that, to a Westerner, were already so cheap.  While I had been treating our time in Bali as a vacation within my travels - and increasing my spending levels - my frugal backpacker senses definitely showed themselves a few times!

From the market, we passed by our hotel and arrived at a woodcarving studio at the end of the road, where Joao selected a small mask with multi-tonal wood and a long, curved open mouth.  We then sat down at a spot called Tutmak Cafe, sipping coffee while I wrote and João painted, as the sun dipped lower in the sky outside.  We continued walking through the side streets as the sun was setting, stopping in a shop with bizarre - yet beautiful - carved animal skulls and strings of wooden beads.  We then were drawn into another store with a gorgeous custom motorcycle sitting in the window.  The boutique was called Kismit, and we chatted at length with the store's owner, an American named Chloe.  The merchandise was sort of Earthy-meets-motorcycle-rocker, and I picked out a beautiful phoenix necklace with a feather that hung separately down the back.  Kismit also a had a separate cafe upstairs, boasting the fastest wifi on the island, but we decided to keep moving in hopes of catching a particular dance that evening. 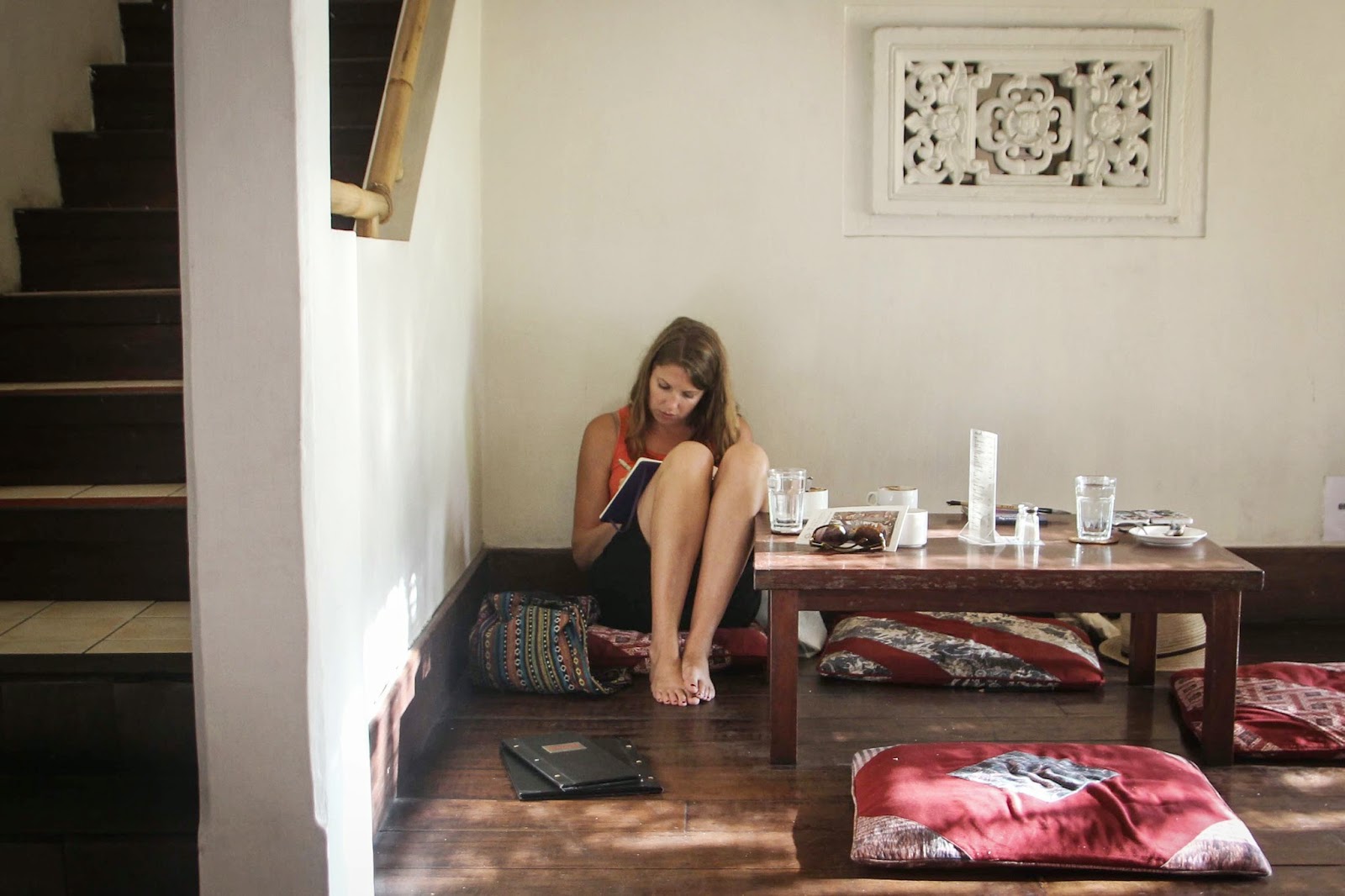 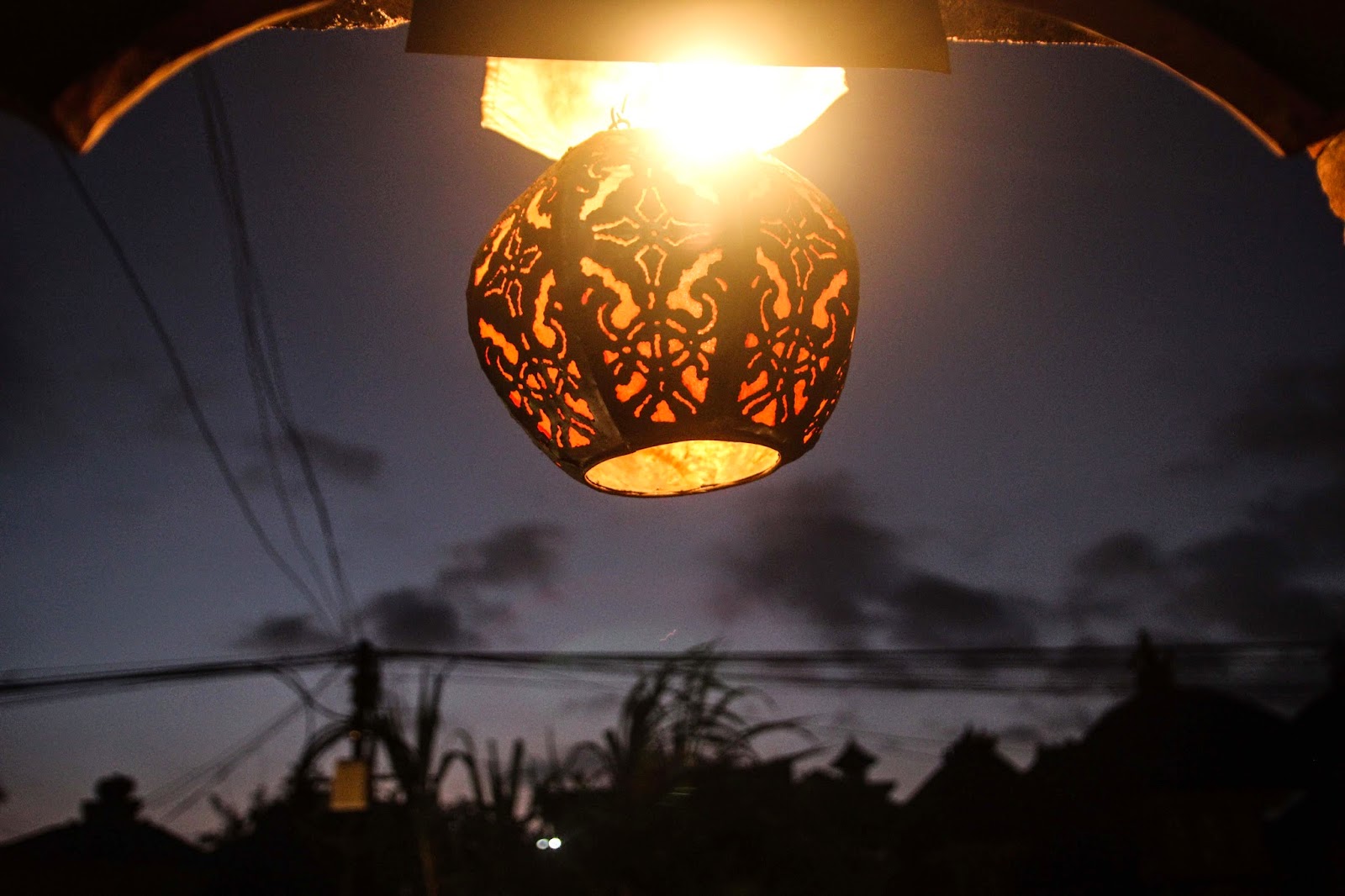 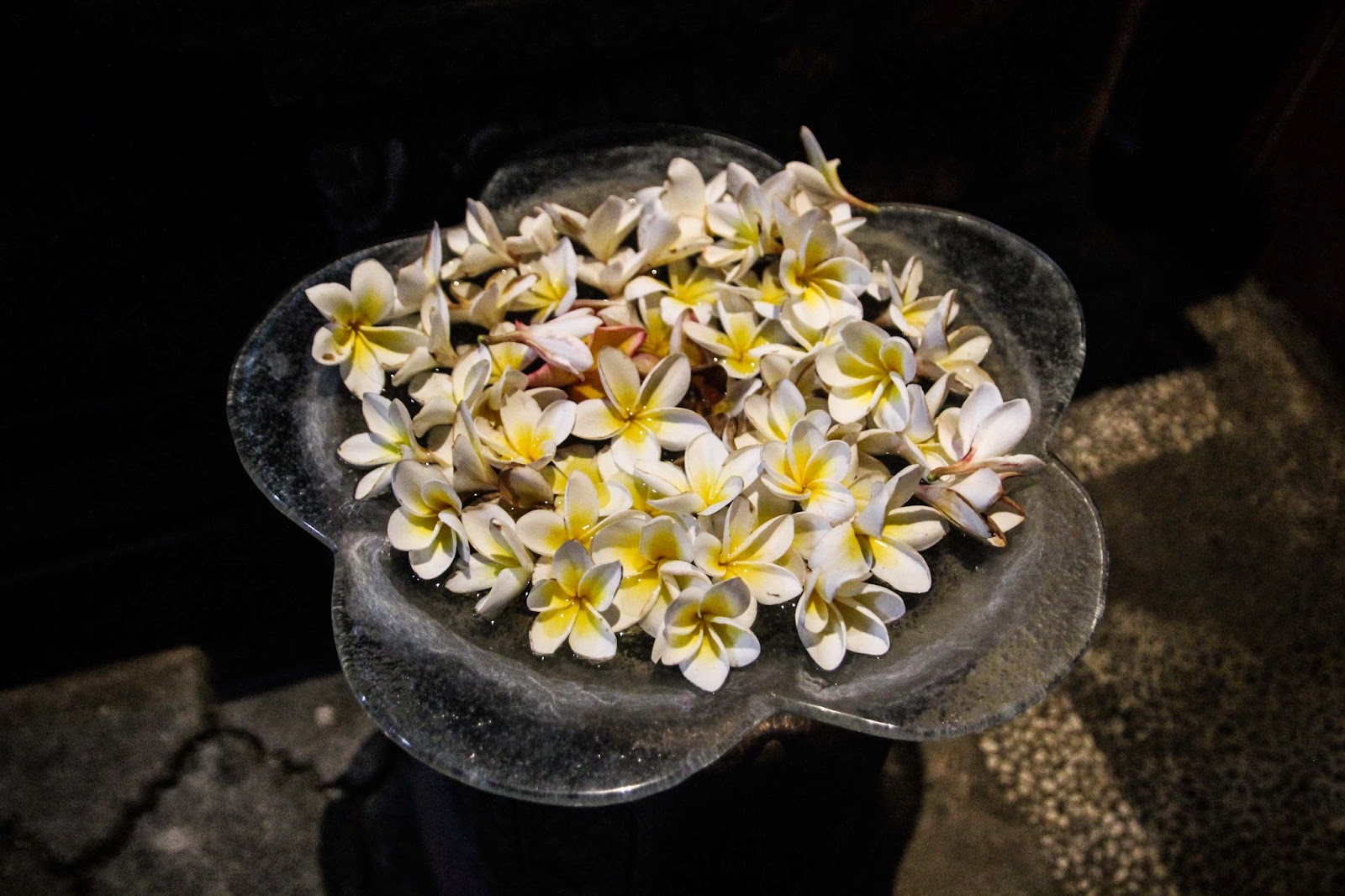 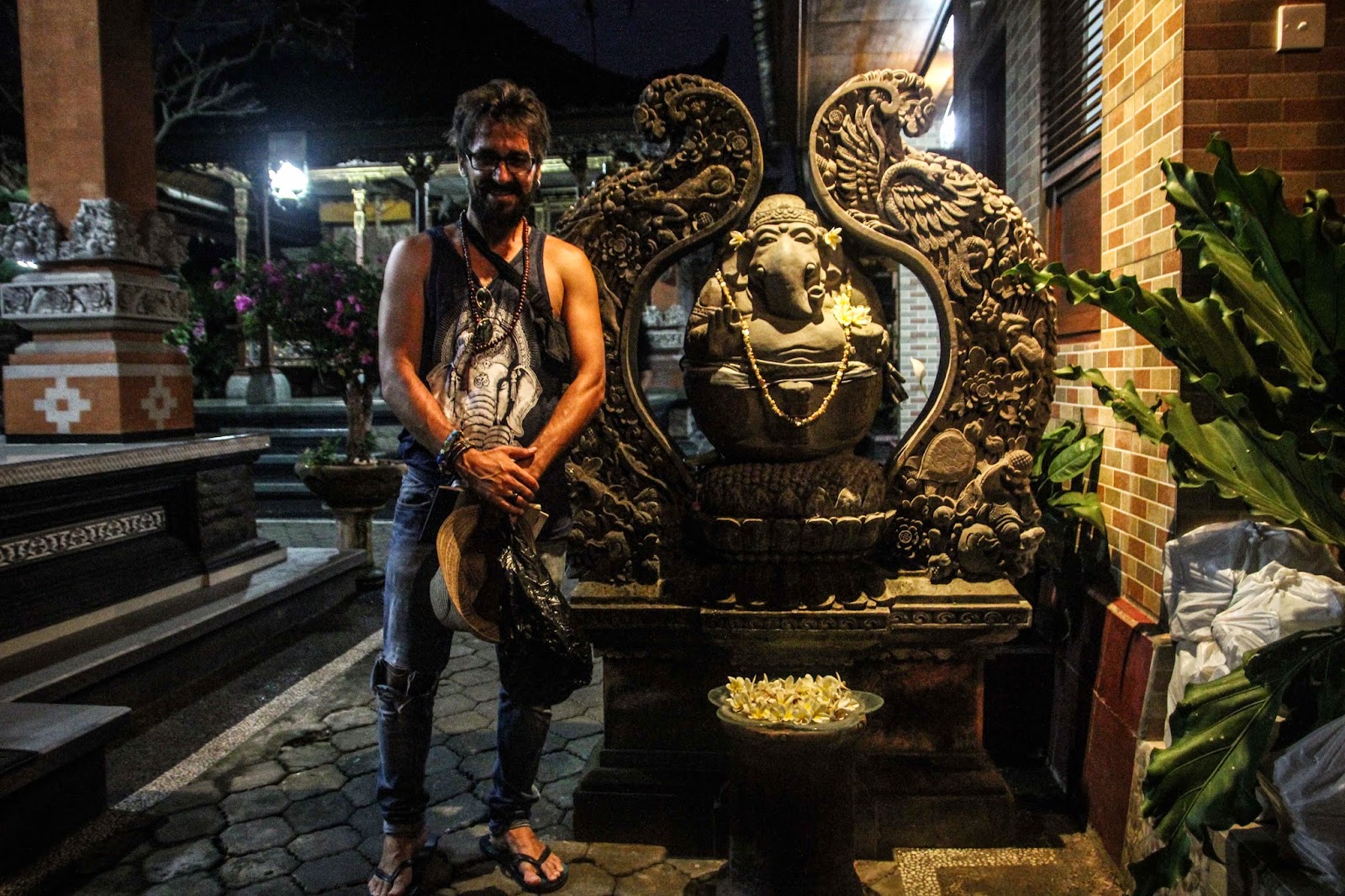 We wound up being unable to locate the side street where the dance was located, and we were already a bit hungry, so we changed our plans to visit a restaurant my friend Susie had recommended called the Dirty Duck.  On our way, we passed a man sitting alone in a tiny shop - really just a small alcove on Hanoman Street, under a single fluorescent bulb, quietly carving wooden masks.  We watched him work for a bit before approaching him, then spoke with him about the masks and the wood as he carved.  His name was Geru, and he told us that he used to work in a factory-style shop until he decided he wanted to carve his own, more intricate and creative pieces.  He was quiet and humble, just like the space he used, and let his work speak for itself.  I selected one with loops of vines and leaves, in a multicolored wood with tan and grey with a slight sheen.  He wrapped it up tightly in layers of newsprint, until I was carrying a small rugby ball form under my arm.

We walked a bit further, passing a number of restaurants, cafes, and yoga shops, until we reached the Dirty Duck.  It was definitely the end of the rush when we arrived, and nearly the end of dinner service, so we were able to snag a secluded bungalow-style table, set completely apart from other patrons, amidst a lush garden filled with statues and fountains.  We ordered crispy duck and a lemony chicken and a bottle of wine, staying until we were practically ushered out as it had completely closed for the evening! 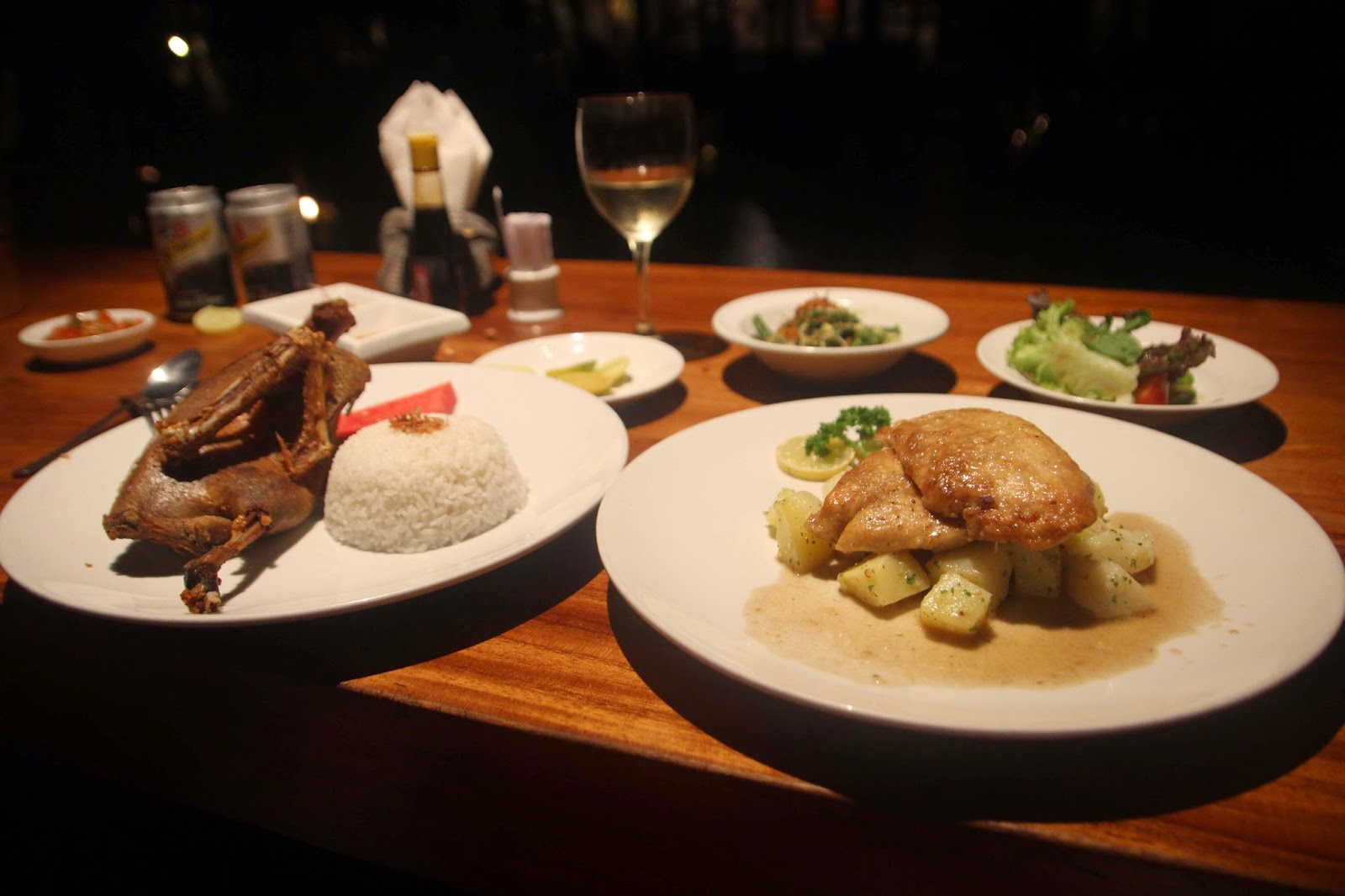 The next morning, we set out with João intending to see the rest of the exhibit at the museum, and myself wanting a foot massage.  On our way out, we noticed a large truck on the side of the road, which a group of women were loading full of rubble from a construction project.  They rapidly walked back and forth to the truck, carrying huge loads of concrete in baskets on their heads, emptying them into the truck, and returning to the construction site.  It wasn't the first or the last time we had seen women carrying loads on their heads, but I was shocked at how heavy these looked!  We stood in awe for a few moments, until we went our separate ways for the next hour. 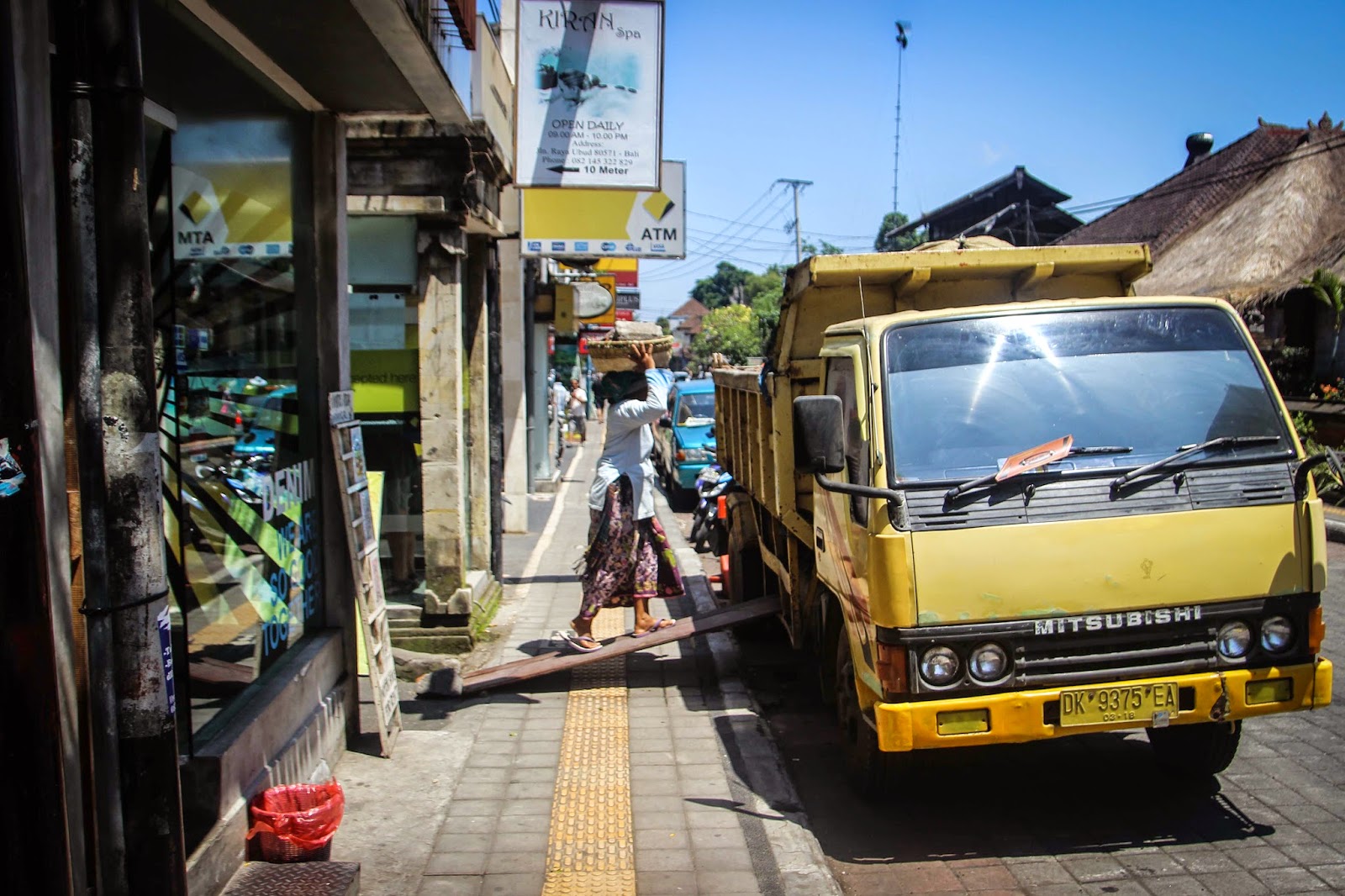 After reconvening, we decided to return to Kismit for lunch. We sat on the upstairs patio and sampled from their incredible vegetarian menu, enjoying the fresh air and the breeze.  I had a sandwich with brie, apple, caramelized onion, and tamarind jam, while João had an 'Asian Bowl', followed by coffee and cookies for both of us. 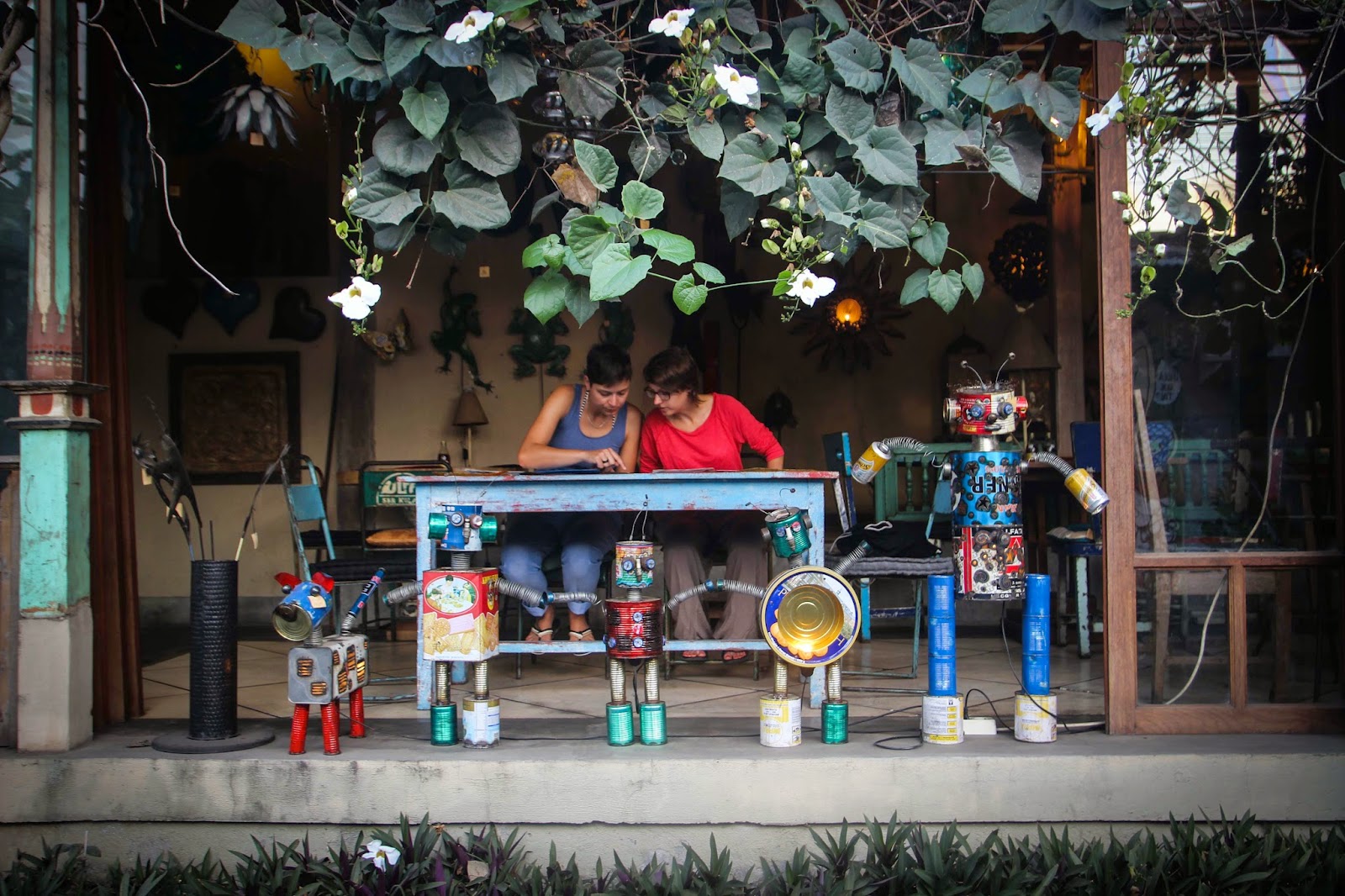 We had planned to head back to the clinic for a followup appointment that evening, but as we passed the Ubud Palace, we noticed that their nightly dance performance was starting relatively soon, and it was one we had really hoped to see!  It promised an appearance by Barong, a friendly spirit we had seen depicted all over the island (I'll explain Barong's story a bit more next time).


We were thrilled to have caught such a wonderful performance so entirely by accident, and we were all smiles as we made our way to the clinic.  Thankfully, everything checked out just fine, and we likely wouldn't have any issue getting João back into the ocean for a dive in a few days' time.  We meandered back into town, returning to a place just near where we had spotted our wood carver, to a swanky little restaurant we had spotted the night before with a gorgeous entryway.  It was full of expats and zenned-out yogis, and of course, the menu was vegetarian.  Thankfully they had a few tuna items on the menu, so we ordered both a spicy tuna sushi roll and a plate with tuna satay and curry, along with a big bowl with a mix of tuna and veggies.  We stuffed ourselves full between dinner and a quick bite of dessert, then made our way back to the hotel to make arrangements for a quick trip out to Lombok the following morning. 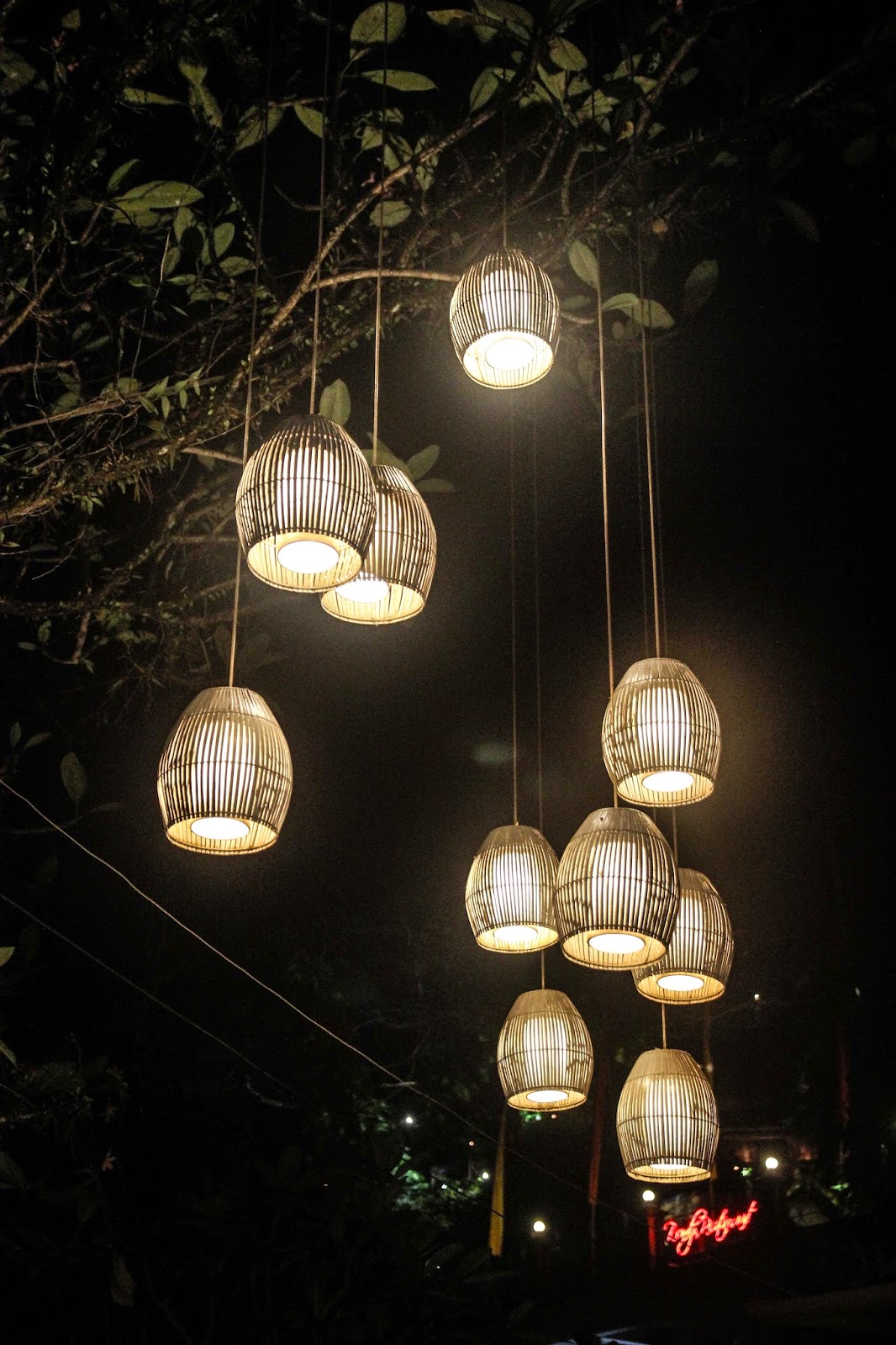 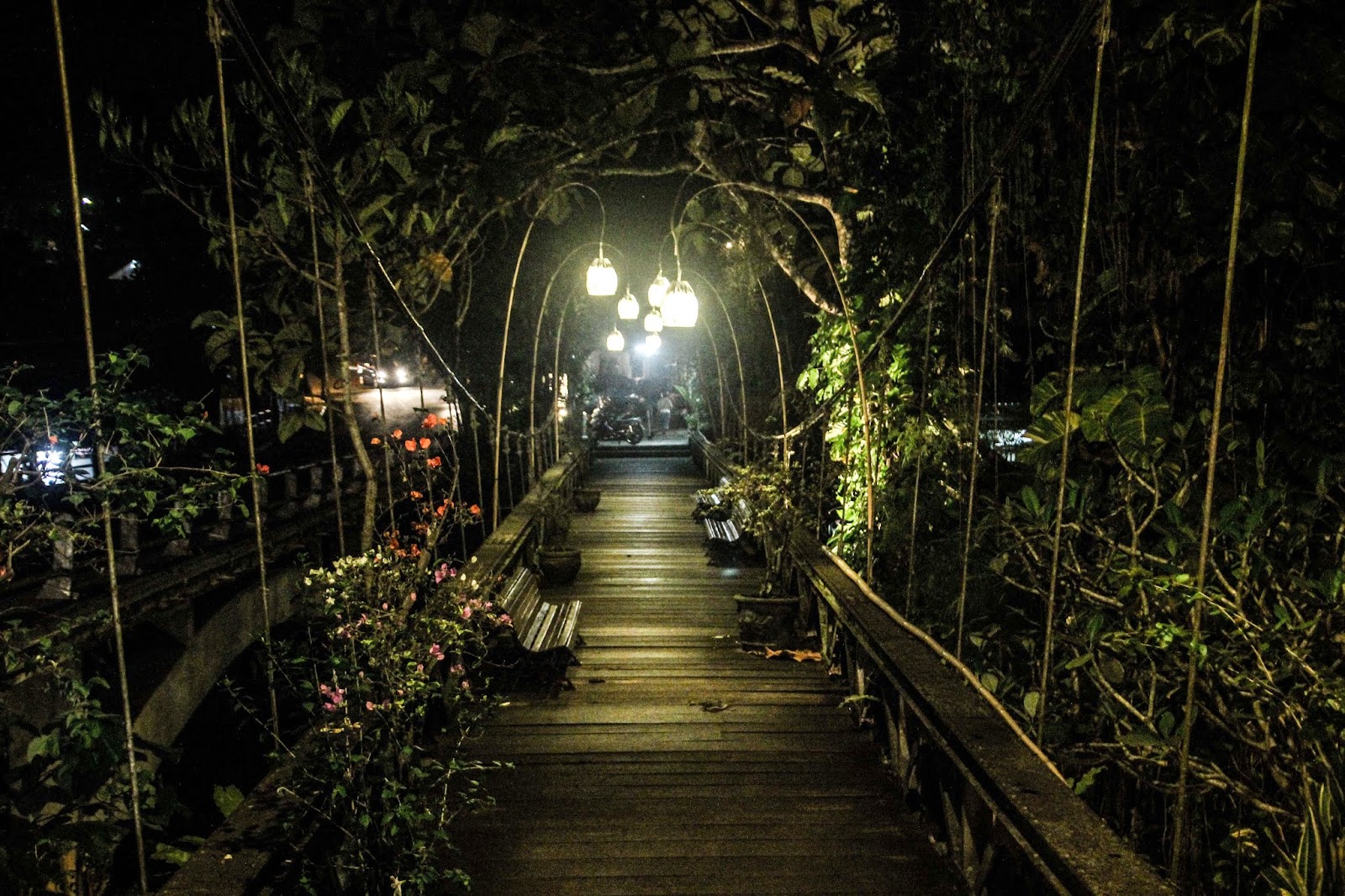 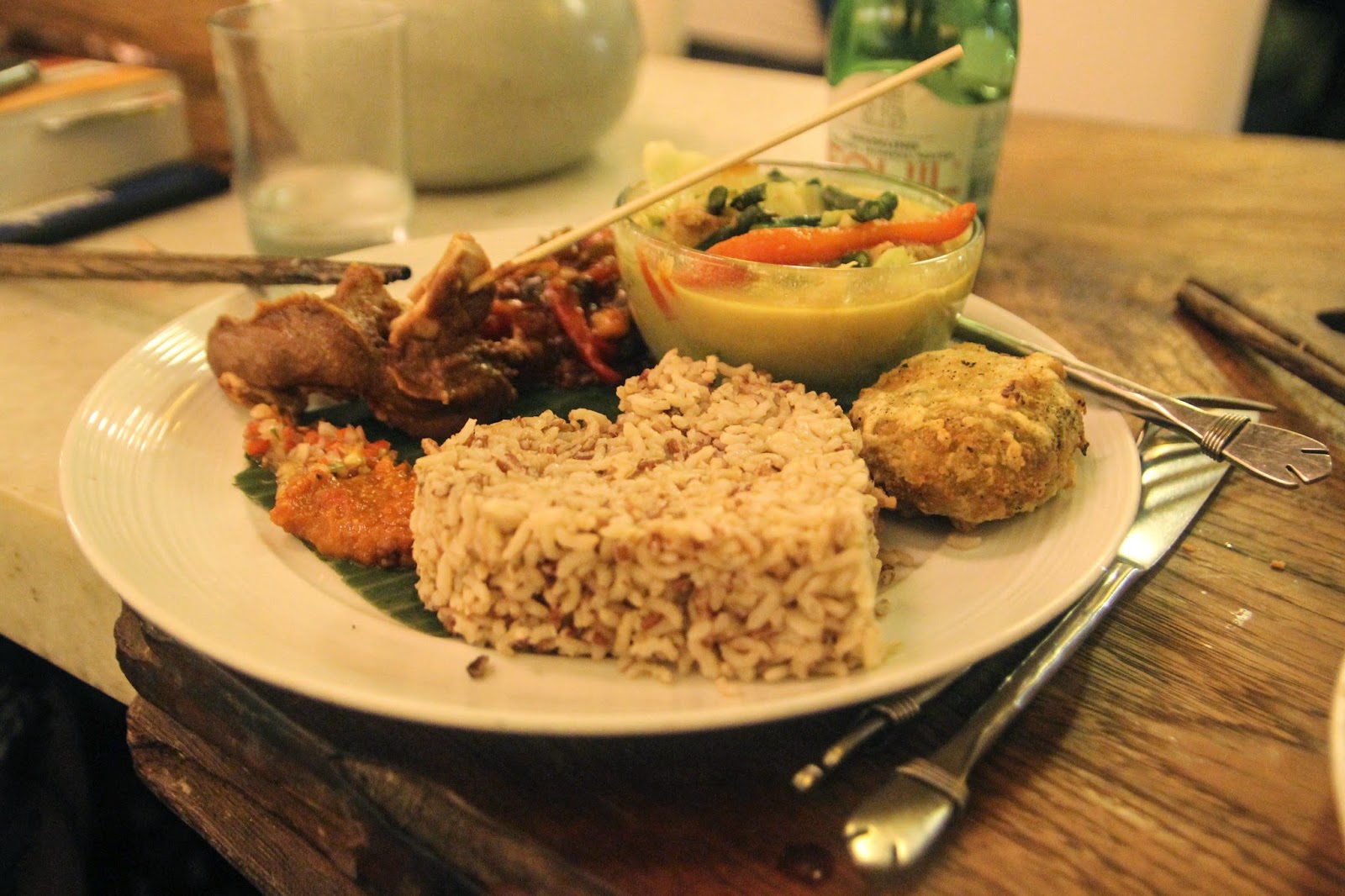 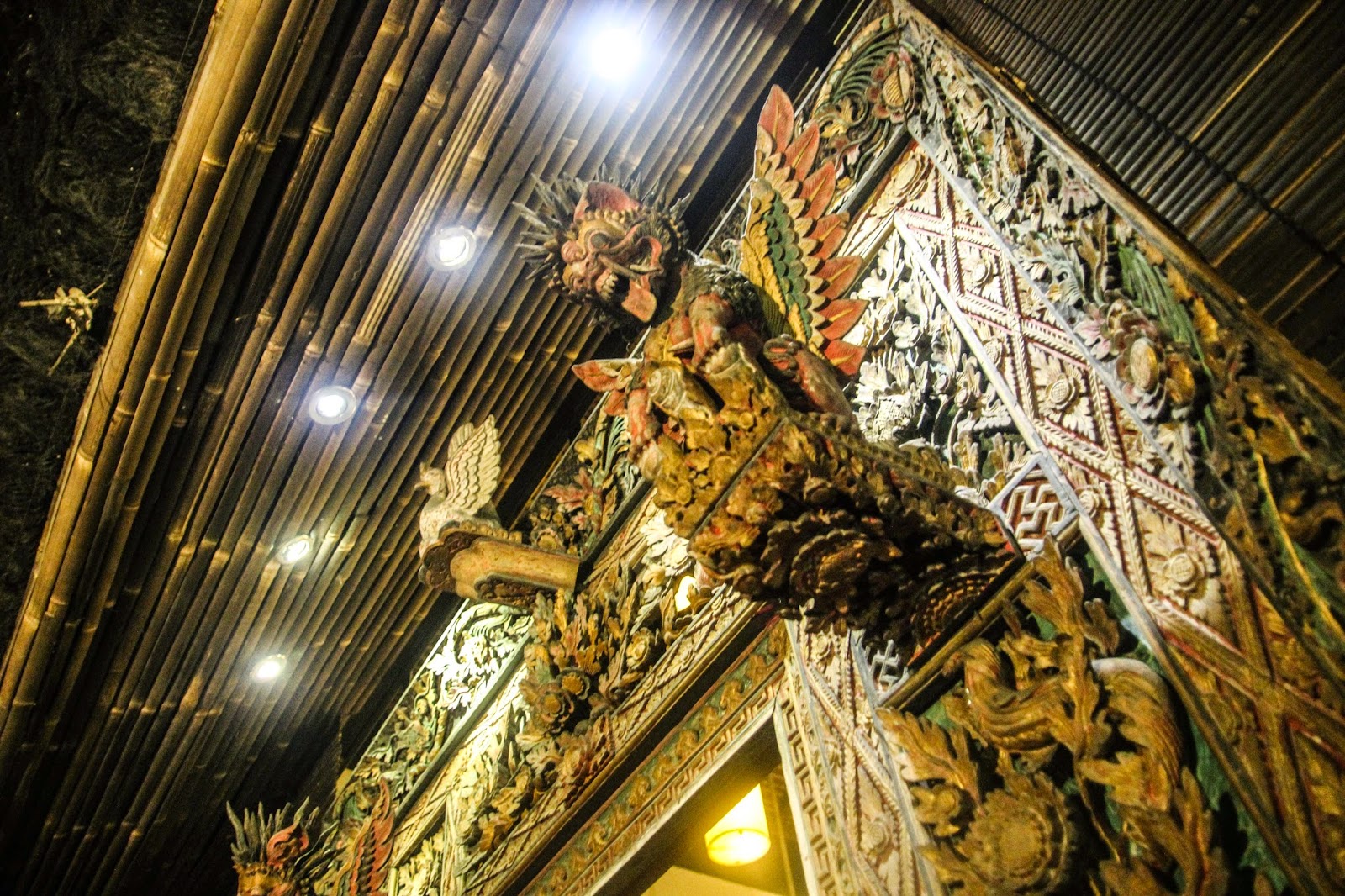 We could have easily spent more time in Ubud, and there was still quite a bit more to explore.  But we wanted to return to Sanur, and we wanted at least a glimpse of another island, so Lombok awaited us.  Little did we know just how much effort it would take for such a short, but incredible stay!
Posted by Outlander Abroad at 12:05 PM