I had been torn about visiting Iguazu Falls - it would be fairly expensive for such a short venture - but it was such a specific place that fascinated me so much, it was hard to pass up the opportunity, knowing I wasn't likely to make it back.  I usually stick to buses in South America, but after comparing prices and times of buses versus flights, it just made more sense to take a quick roundtrip flight from the smaller, local Buenos Aires airport.  I took an afternoon flight up to Iguazu on Jan. 6, and hopped aboard the airport shuttle bus for a lengthy ride into and through town, eventually reaching my hostel.  I had booked a stay at the Mango Chill, which was centrally located (only a block from the bus station), and had almost surprisingly nice decor.  One thing they didn't offer was a kitchen, but with a relatively small number of guests, they offered a family-style meal each night for a reasonable price that nearly everyone took advantage of.  The first night was a full-on traditional asado, with sausage, beef, grilled vegetables, potato salad, and a complementary glass of red wine.  It was the perfect way to fill up before what would be an early morning and a full day at the falls.

The next morning, I got up early for a quick breakfast, planning to catch one of the early buses to the park since I only had one day to view the falls.  The hostel manager handed me a map of the park and provided a quick overview, pointing out in what order he recommended seeing everything, and then I was off to the bus station.  I boarded the 9am bus, sat down, and began studying my map.  A few minutes later I heard someone say, "Jen….?" and I looked up to see none other than Bar, my Israeli friend from Valparaiso that I had met up with (along with our friends Josefine and Maja) all over Chile and Argentina!  We had each planned a quick trip to Iguazu to go to the park just for one day and had assumed we would be going it alone - all of a sudden we were both elated and shocked to have such a great buddy to explore with!

We arrived at Parque Nacional Iguazu planning to follow the circuit my hostel had recommended, making sure to immediately book seats on a short boat tour into the falls for the afternoon.  We started off along the "upper circuit", a series of wood and metal platforms that run across the tops of some of the major sets of falls.  We snaked our way through jungle and over the tops of rushing water, occasionally getting misted by sprays of water off of the falls we were passing on top of.  At the end of the path, we had an amazing view out to the rest of the series of falls.  After winding our way back from the upper circuit, we grabbed a quick bite to eat at one of the park convenience stores, avoiding trouble from racoon-like animals with long snouts trying to steal food straight off the tables! 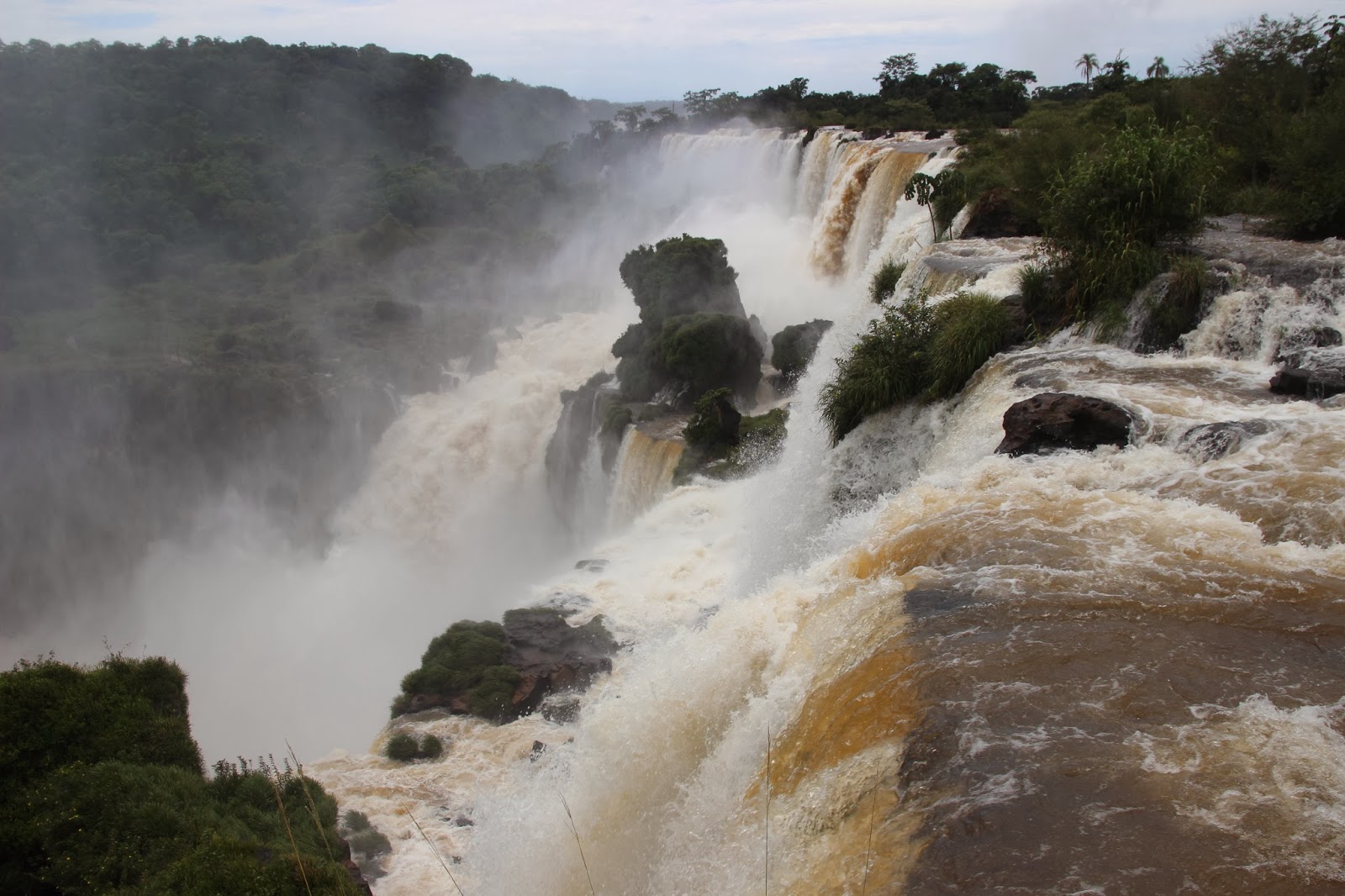 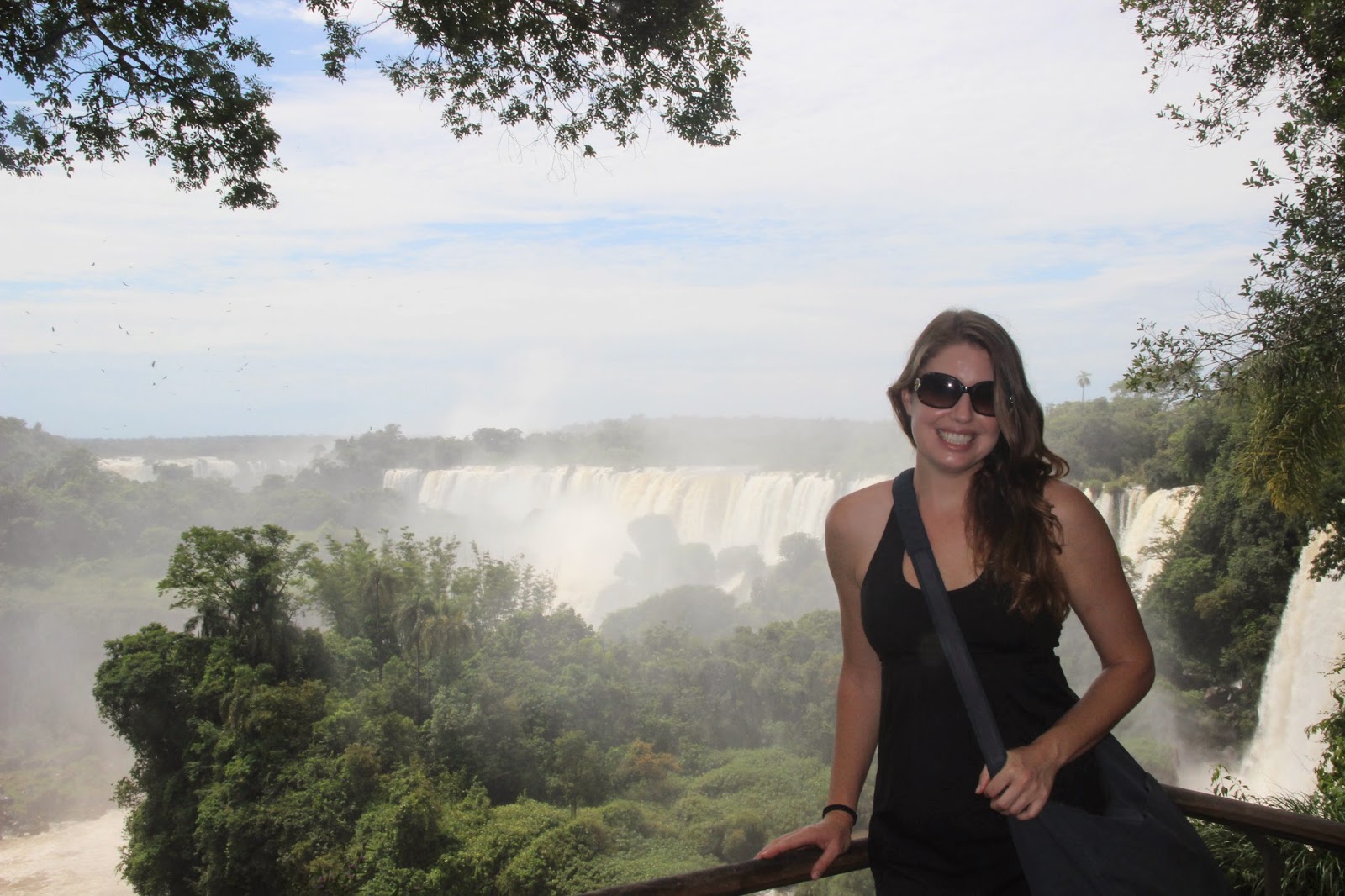 Next we continued down to the lower circuit, where we saw a series of small falls before turning a corner to catch an amazing panorama of most of the falls through the trees.  We continued along that path, weaving through and past the hoards of people, to a deck that was practically all the way under one of the major falls.  We didn't go all the way to the end of the deck, opting to wait until our boat tour to get fully drenched, but we came pretty close to getting soaked even at that point!  From there we made our way down a series of stairs and platforms, taking in more views of the falls, to a small dock to catch our boat for the tour. 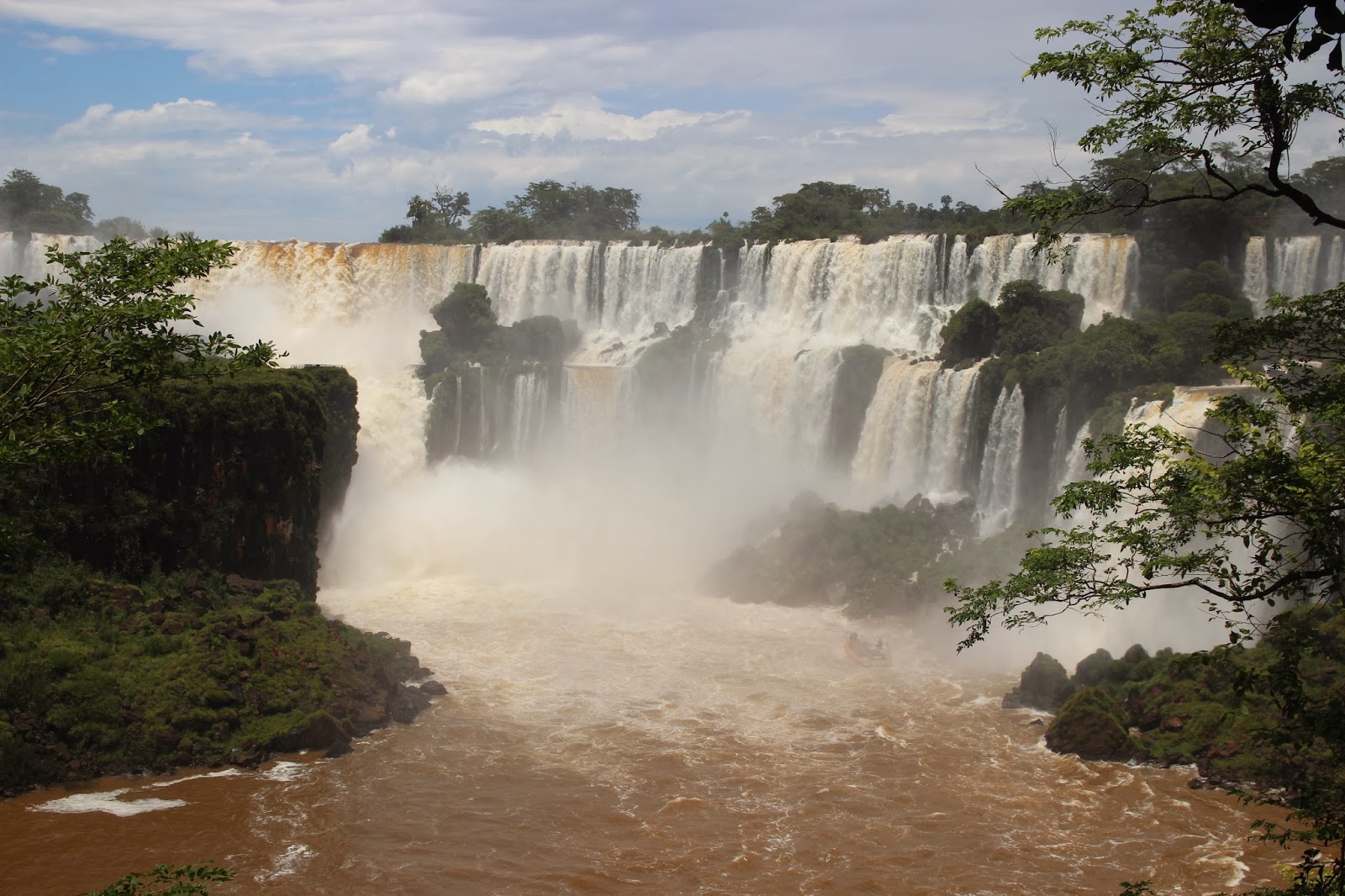 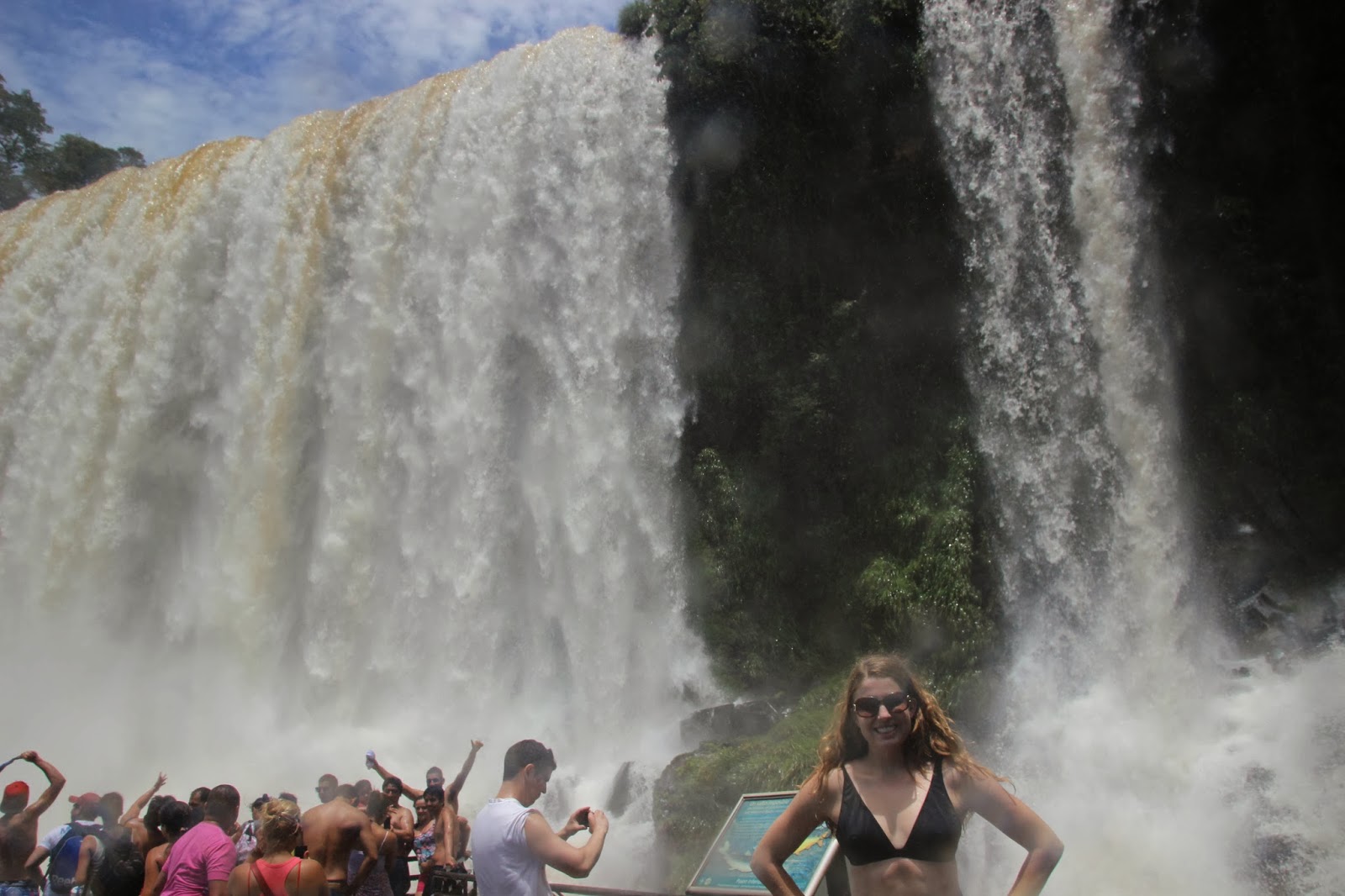 Somehow we managed to accidentally arrive at the exact time we had booked for the boat tour.  We were given large drybags for our bags and cameras, and most everyone stripped down to only swimwear, or close to it, as we were fitted with lifejackets and brought on board.  We started off with two wide passes to take in the views of two major alcoves of falls on either side of San Martin Island, allowing those on board to quickly snap pictures before being given the signal to pack everything away in those drybags, because we were going in.  We started off by diving straight into the larger of the two sets of falls, absolutely getting pounded by water as the collective boat riders screamed and laughed as the water left us drenched.  Then the boat swung around the island, heading for the smaller set of falls.  We hung out under the falls as water gushed at us once again - this time, I could actually see the water coming off the tops of the falls through my sunglasses - as Bar yelled, "I sure hope these drybags work!!".  Thankfully they did, our stuff completely dry despite our entire bodies being dripping wet from head to toe.  The entire experience was something like sitting inside a washing machine during the agitation cycle - on a hot, sunny day, it couldn't have been more perfect! 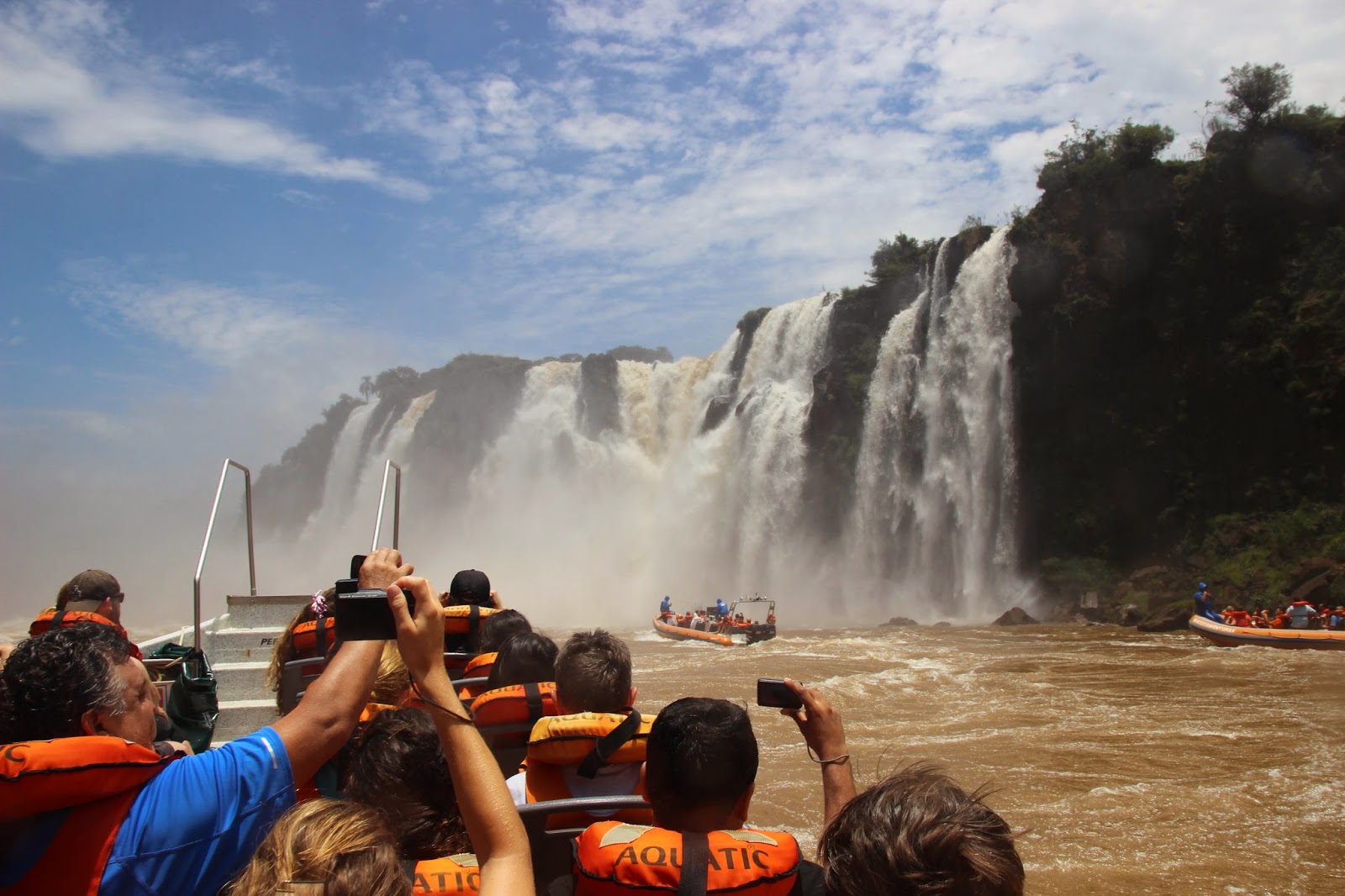 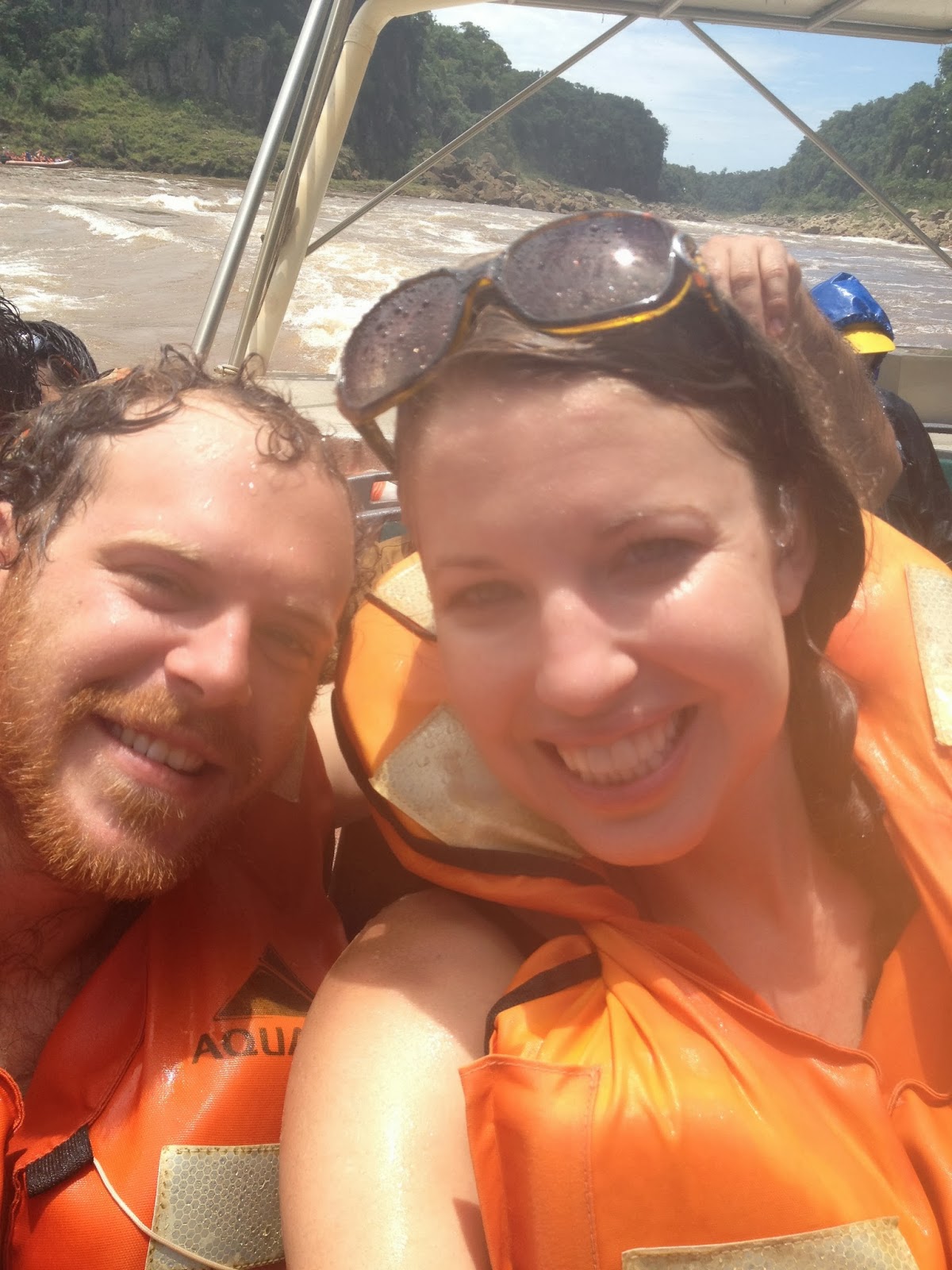 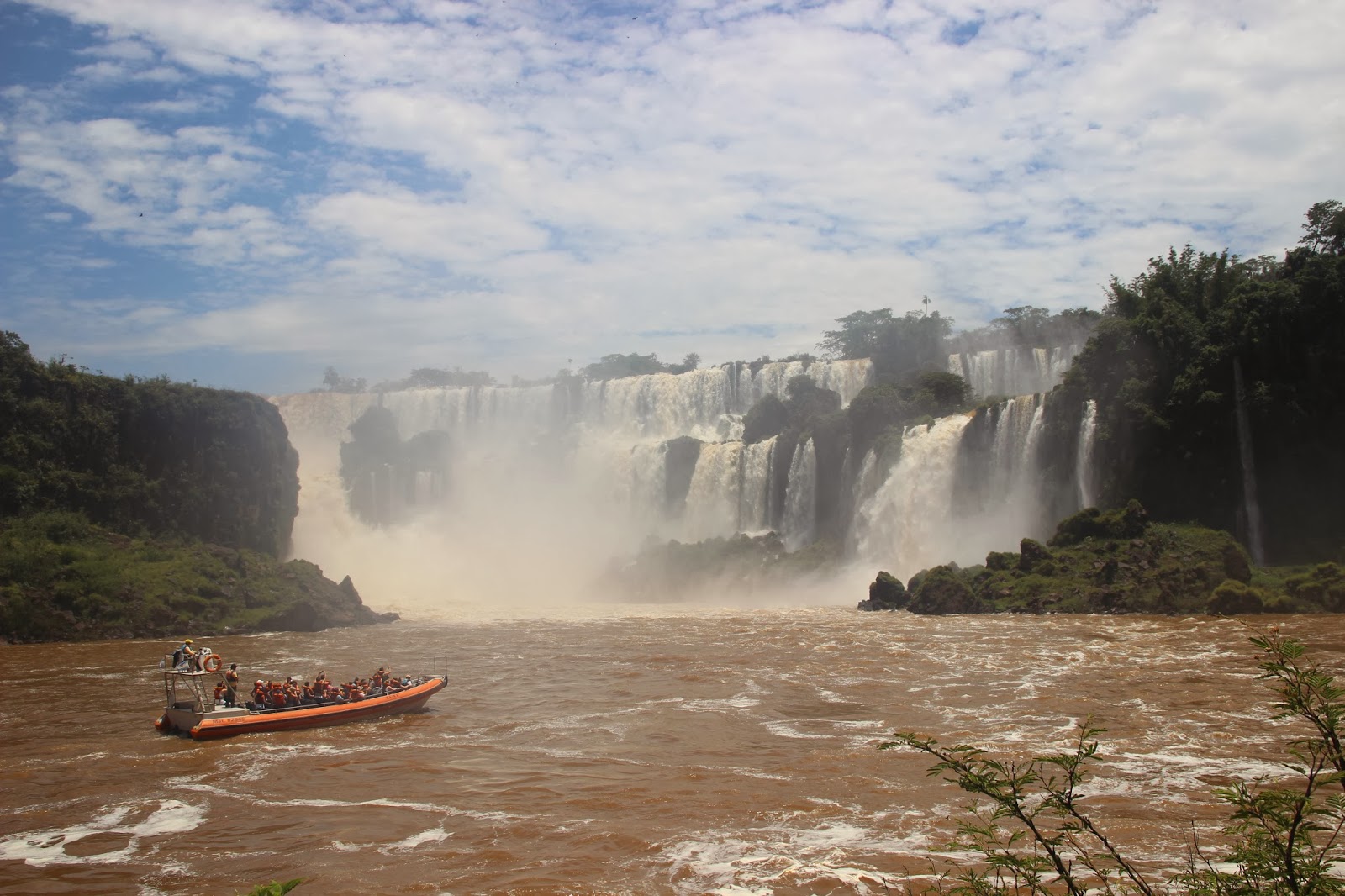 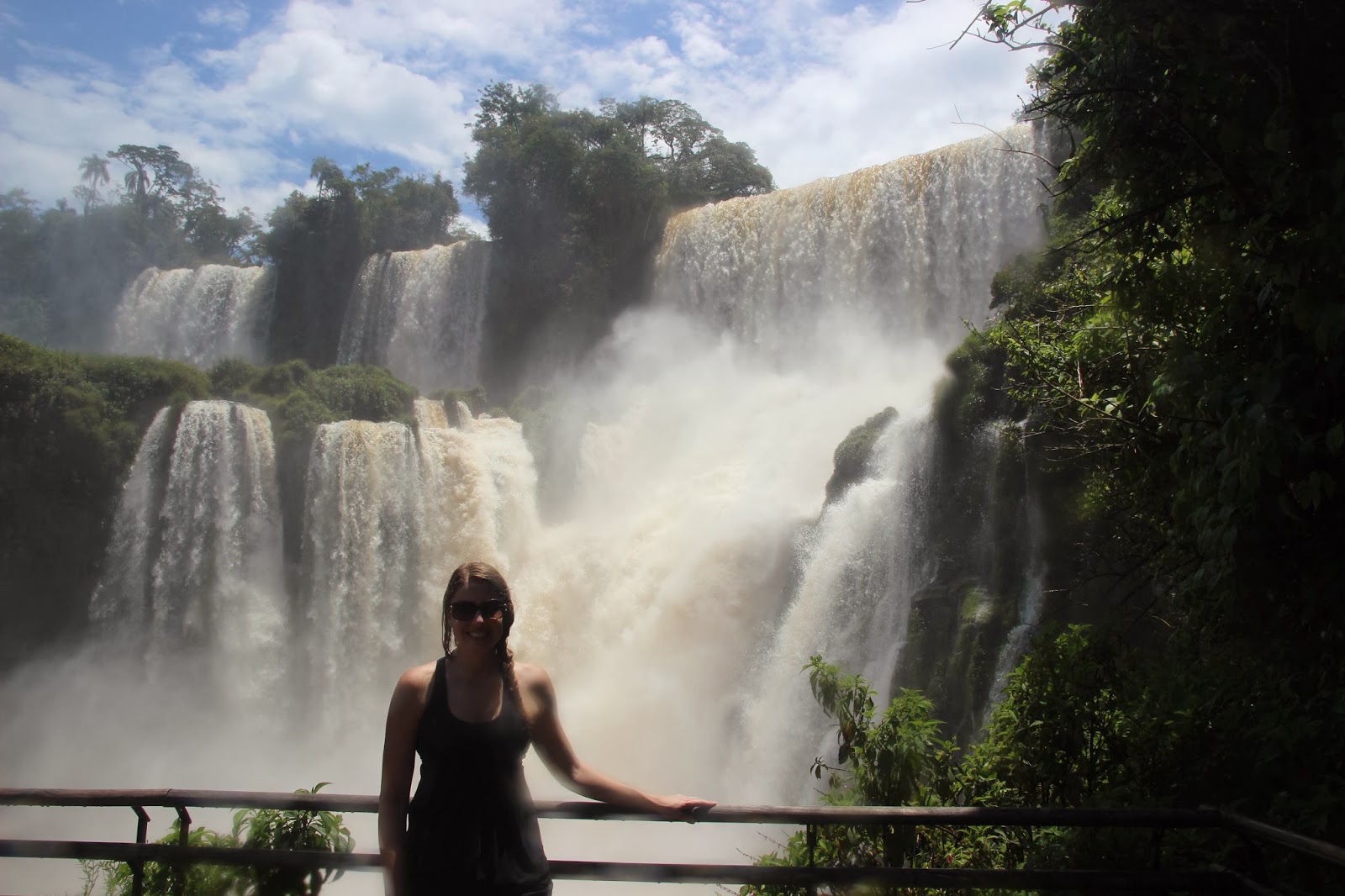 This was also about the time I realized exactly what Iguazu is - for better or worse, it's natural wonder meets amusement park.  Thankfully for me, the "amusement park" feel of it - not just the boat ride, which was fantastic, but the massive crowds, the convenience store / fast food restaurant, the platforms guiding you through the "attraction", the small train that takes you between points in the park - didn't ruin the experience, the natural beauty of it all, for me.  But it does toe the line.  And a lot of these things are simply first world conveniences that we've come to expect when we visit any tourist destination, but at what point do we lose the sense of nature?  While one could argue that the majestic beauty of the falls rivals the glaciers and mountains of Patagonia, I don't think it can compare to the experience of being in nature alongside those wonders.  So, just something to consider before you visit either type of destination. *Steps off soapbox.*

After the boat tour, we actually had some of the best panoramic views of the falls all day, as we slowly made our way back up the sets of stairs, finishing the path of the lower circuit by passing a set of three smaller falls.  We grabbed a quick snack (avoiding the rodents), and hopped on a tram that would take us to the Garganta del Diablo - the Devil's Throat.  I was definitely glad we had heeded my hostel's advice - the line for the tram was MUCH shorter than in the morning, so I have to assume the crowds were far smaller at the time that we arrived.  The tram took us directly to the top, and exiting, we followed another long series of platforms over the upper Iguazu River out to the Devil's Throat, passing assorted wildlife along the way!  When we finally arrived, the viewing platform was still packed full of tourists, but as one tour group cleared away, the platform was remarkably easy to move around and find space along the rail to take in the spectacular view. 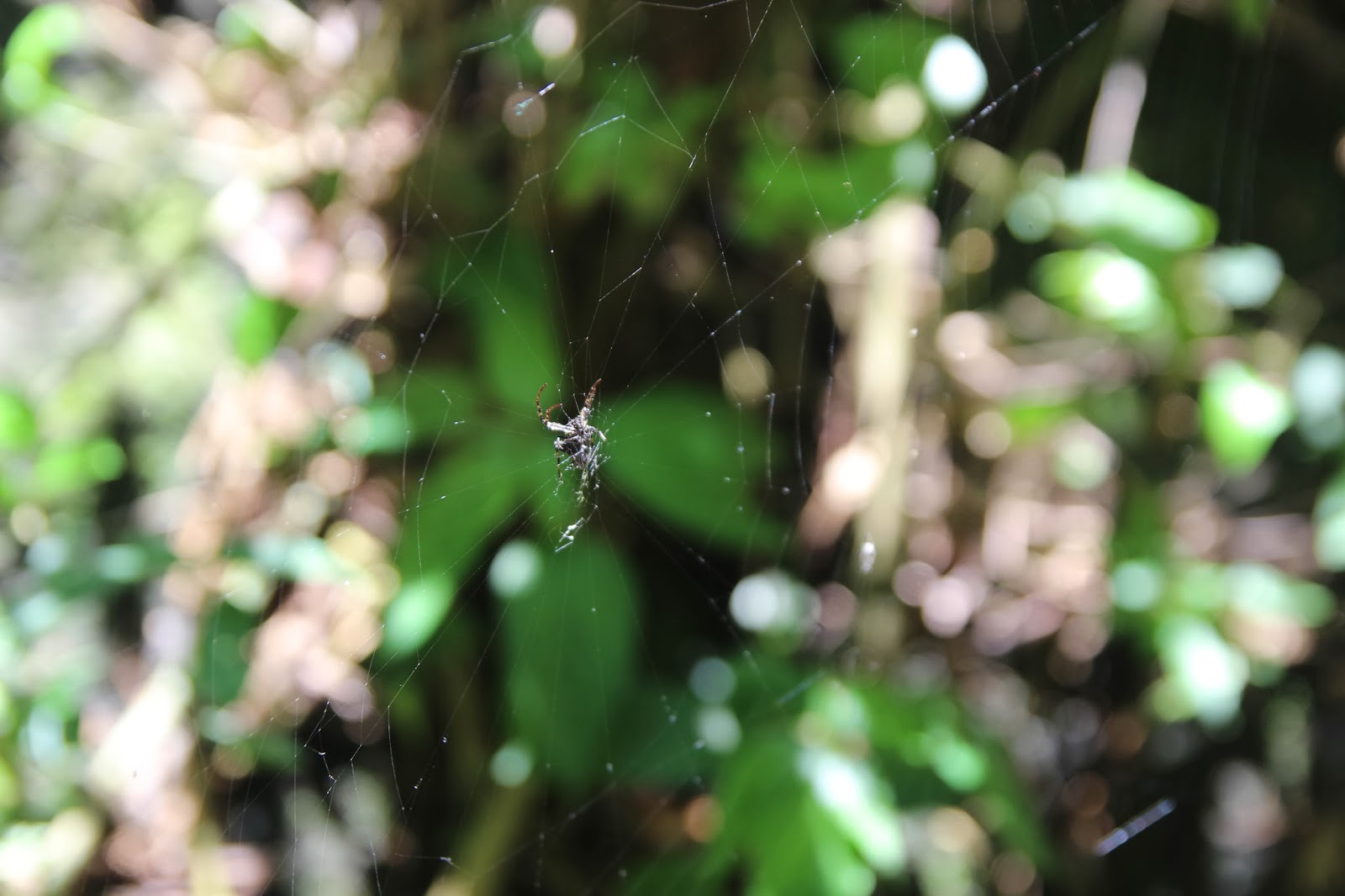 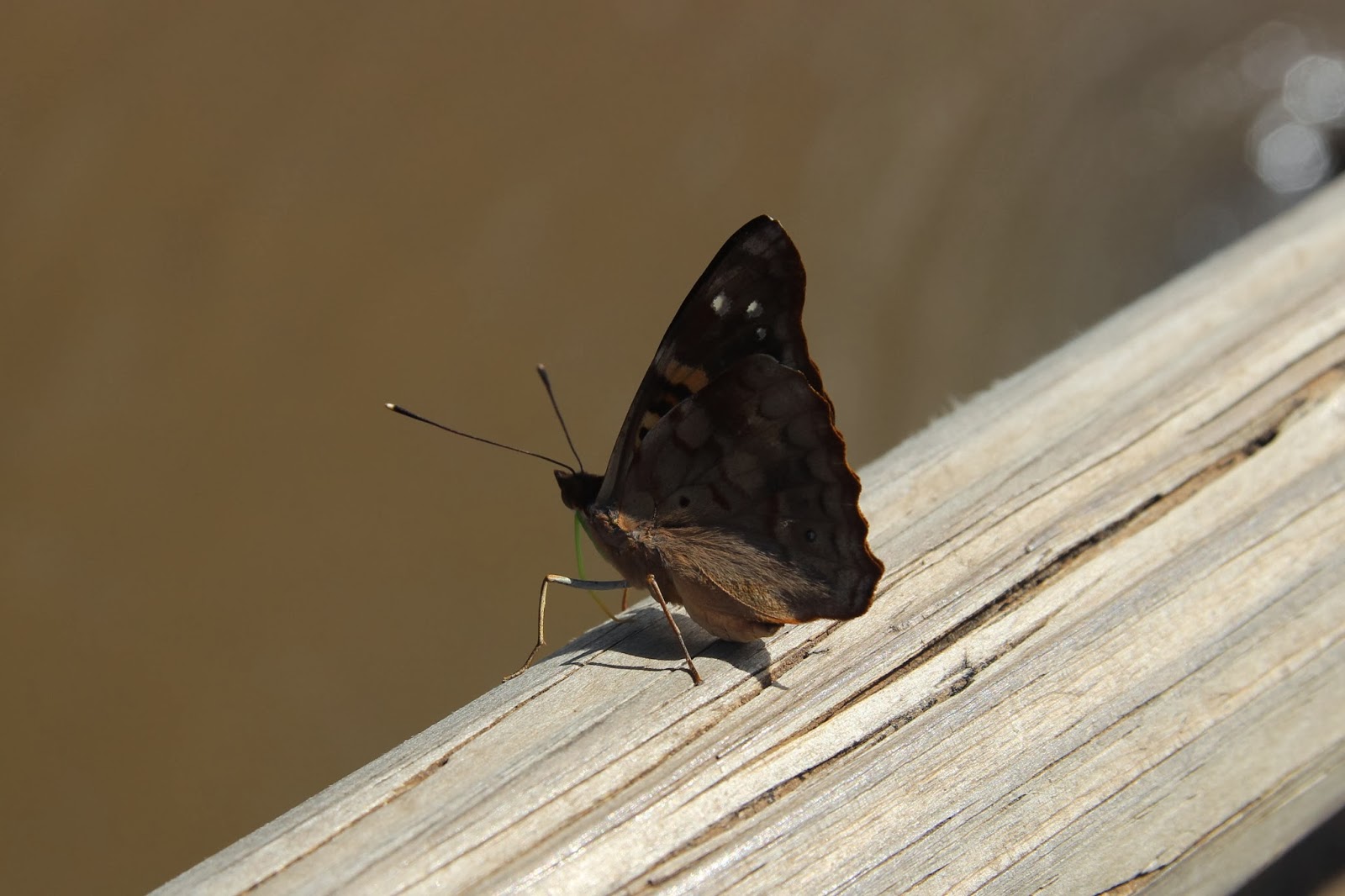 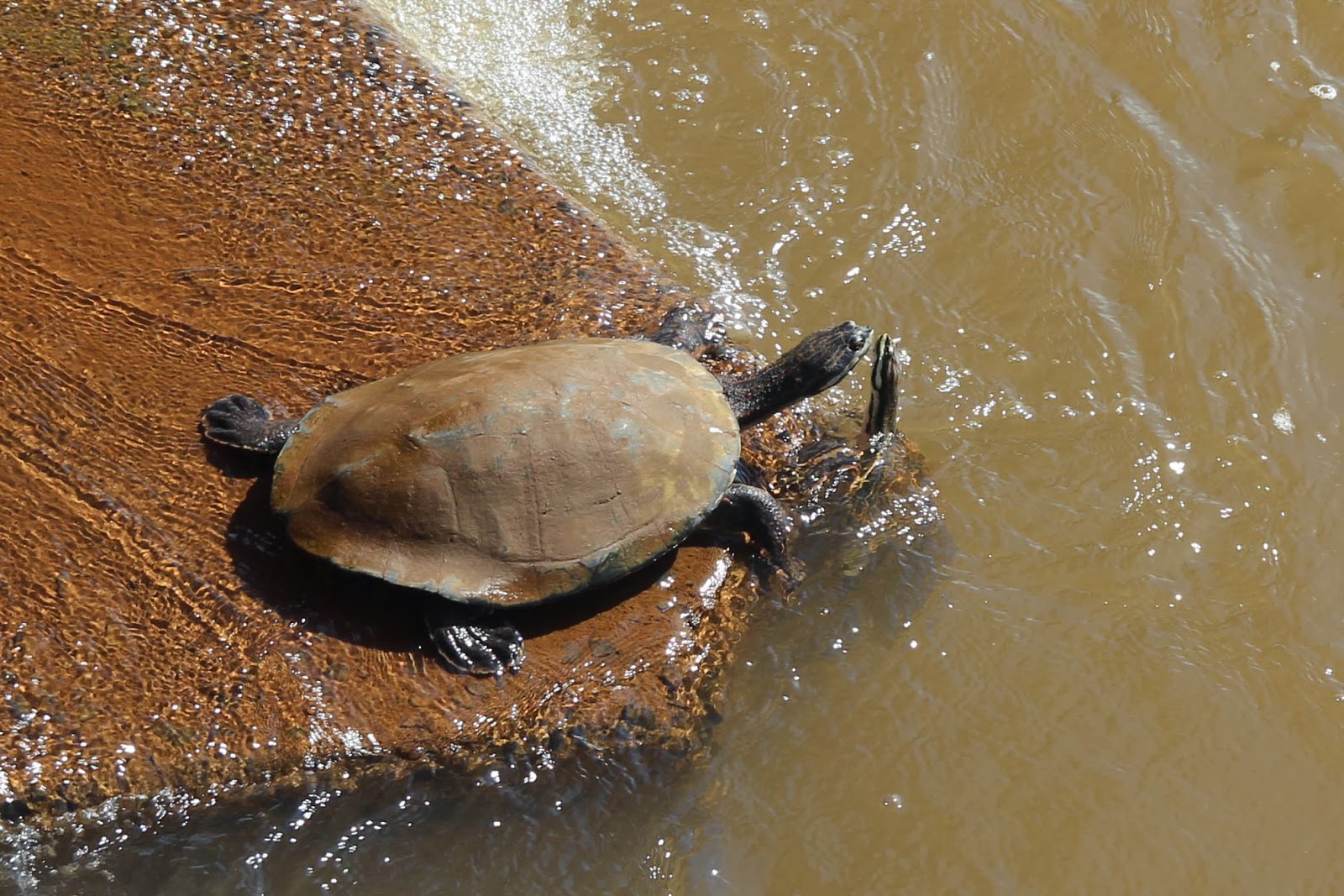 The Devil's Throat is basically a horseshoe of massive waterfalls, the innermost section a booming current of water throwing up a near-constant enormous spray of water, a rainbow delicately visible within the heart of it.  To the left of the 'throat', a corridor of waterfalls curves away to a vanishing point - a seemingly endless hallway of rushing water.  We stayed for a while just taking in the sight - the incredible beauty - and I was so glad we had waited until the end to visit this spot.  It was definitely the grand finale. 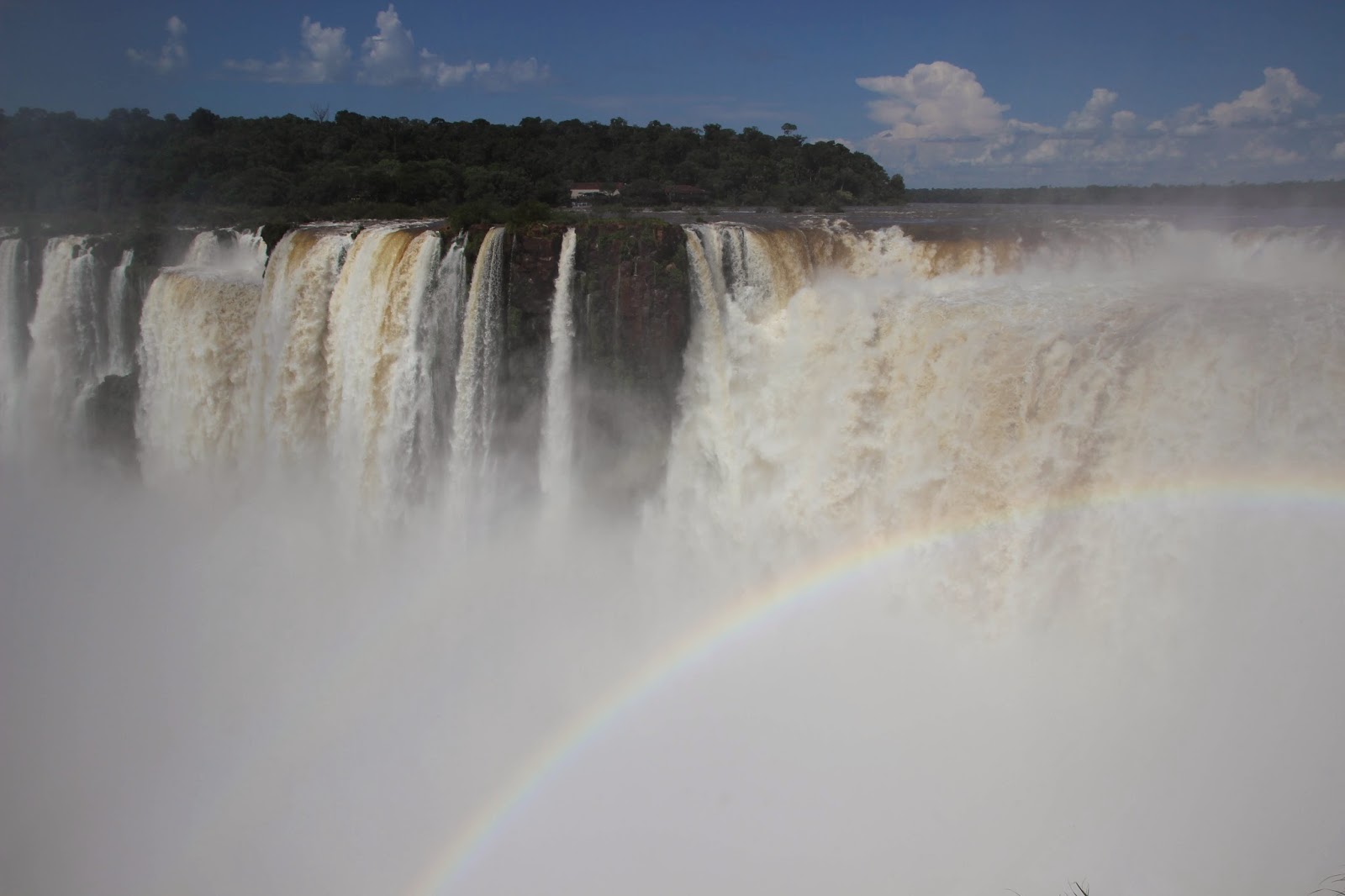 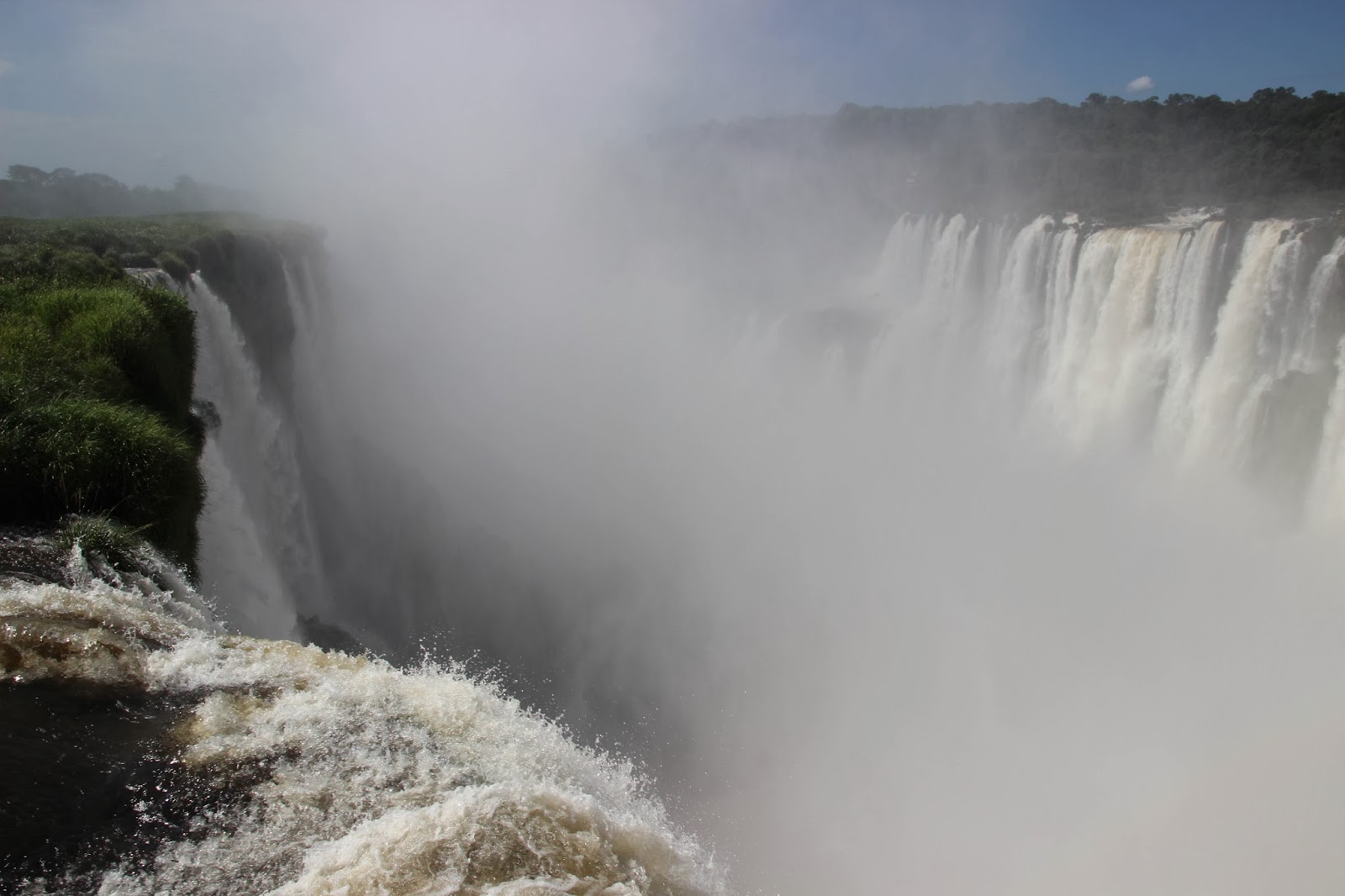 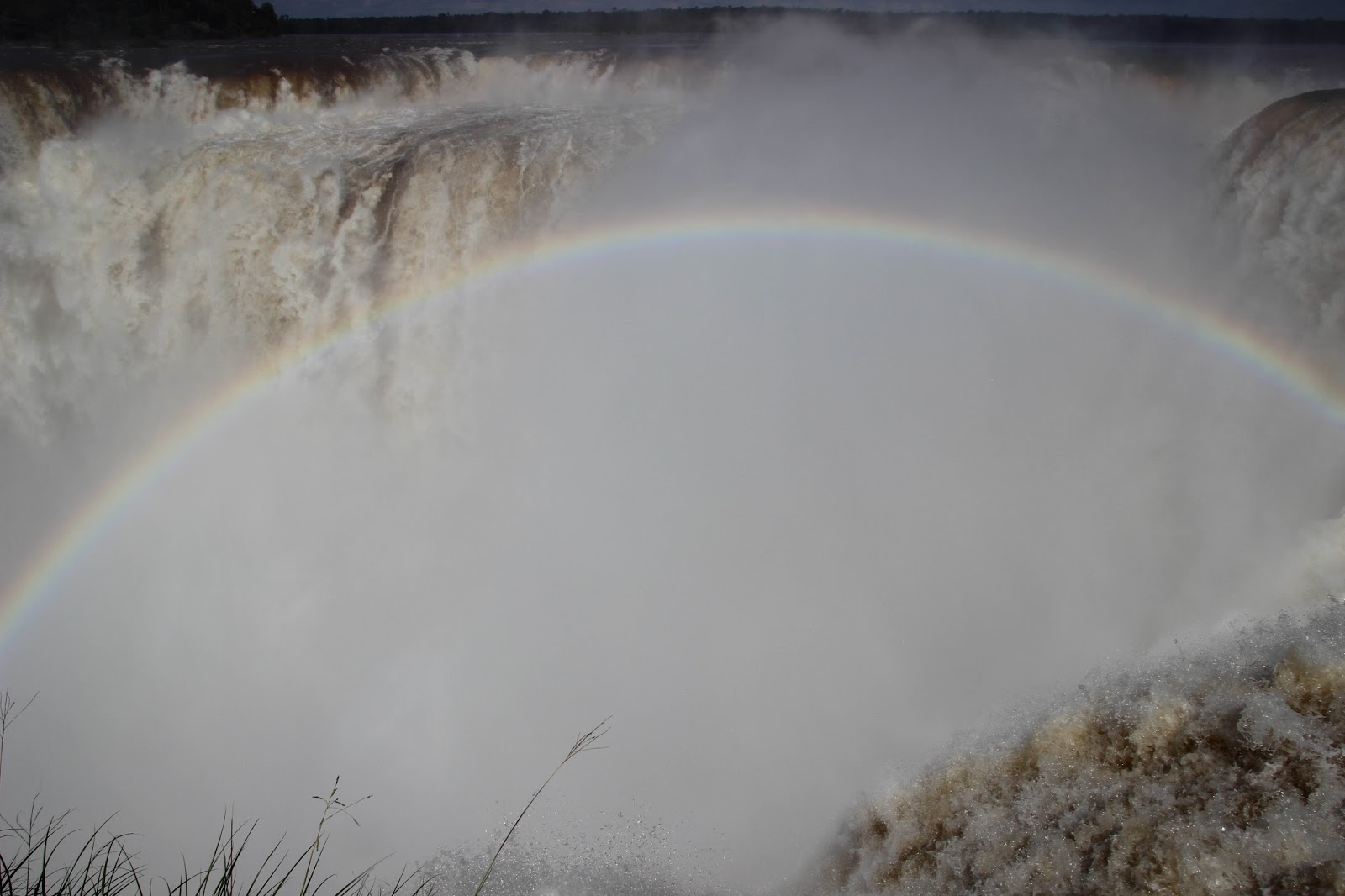 Winding our way back along the path, we made our way back and exited the park, immediately catching the bus back into town, where we had an early dinner of noodles at Wok & Grill Terra, where we said our farewells and departed - me for my hostel, an early night, and a ridiculously early flight the next morning, Bar to reserve a bus ticket to his next destination.

I still can't believe how incredibly lucky I was during that short span of time - against all odds, my day at Iguazu Falls was met with perfect weather, and my solo venture morphed into a time to reconnect with an "old friend" from the Gringo Trail.  The entire visit was a wonderful experience, and I'm so glad that I took the risk (and spent the money) to make the journey.

Posted by Outlander Abroad at 12:23 PM