Let me tell you a story.

Once upon a time, my mom and I decided to take a road trip through Spain and Portugal. It was a last-minute thing, due to unforeseen events that turned my plans upside down and yet, it was all for the best.  We had a couple of days to kill in between planned stops, so we looked at the map for what options we had on the way.  There were a few larger sized dots to choose from, and as I drove, my mom thumbed through the guidebook for information that might sway our decision.  We settled on two stops:  Aveiro and Coimbra, two small picturesque towns north of Lisbon, our eventual destination.  We arrived in Aveiro first, hungry for lunch, so we enquired at the local turismo for a recommendation.  They suggested a seafood spot just a few blocks away, taking us past the beautiful little canals the city is known for, across mosaic tile sidewalks with geometric and organic shapes reminiscent of the ocean nearby.

We found the restaurant easily and sat down.  We were the absolutely only people there.  Probably being offseason in a tourist part of town and the fact that a time change entering Portugal had put us hours before the usual lunch rush, not a soul entered during our entire meal.  Normally this could be a sign of a poor restaurant, but the food was absolutely fantastic.  We dined on a variety of fresh tapas, and we selected a freshly caught fish (St. Peter's fish, to be exact) to be perfectly grilled and served for us.  Since we're the friendly type and no one was in the restaurant, we chatted with our waiter, who spoke perfect English and seemed surprised that two Americans had happened into his restaurant and were so curious about his town and his country.  He also happened to be an actor.. and an artist… and a musician.  He was working on a bit of a 'rock opera' theater piece and tried to explain it to us.  Intrigued by the handsome waiter and his rock opera, I exchanged email addresses with him, hoping to, at the very least, be able to see some examples of his art of the theater piece he was creating.

Over the next two years we chatted only sporadically, but at some point, seeing some of his paintings posted on Facebook, I asked if he had any available for purchase.  Surprised, his response was along the lines of, "You want to pay money for a painting of mine?"  When I confirmed that yes, this was the case, he said that he would want to come up with something special since this was now a commission.  Fast forward another year and a half or so, we still chat on occasion, and I haven't pressed him about the painting, figuring he's busy and will come up with something when he feels inspired.  And then I see a few posts start popping up with previews of the painting he's working on - an abstract portrait... of me!  A couple of months later, I was receiving it in the mail - an absolutely gorgeous piece of work, a massive canvas, that completely blew me away.  And the crazy thing was, he was thanking me, for giving him the opportunity, for allowing him to rediscover a love of painting, and for helping him through a difficult time in his life. 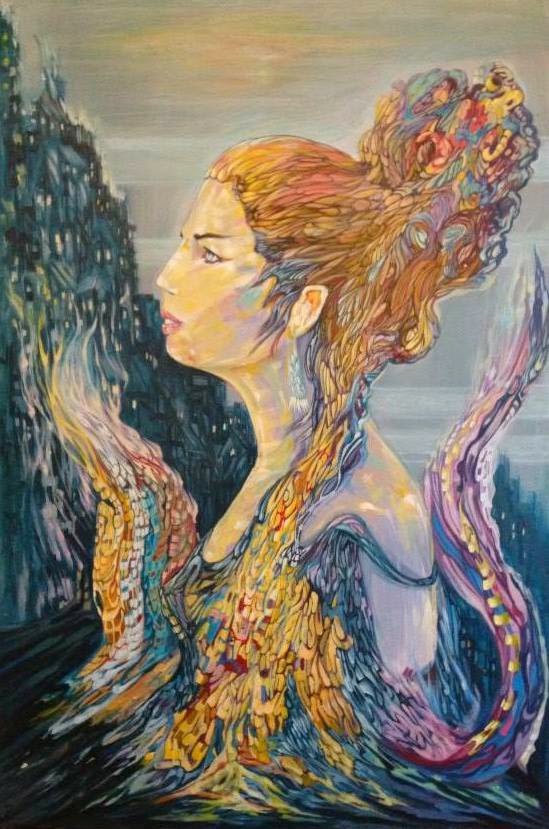 This was just a few months before I departed on my trip, and I found myself chatting with him much more often.  He was intrigued by my decision to travel, and as I began to post photos of my adventures, he loved seeing all of the incredible beauty out there in the world that I was having the opportunity to see.  And then, while I was sitting in a hostel in Argentina finishing my breakfast, a man sat down, flustered from a very delayed flight and waiting on his room to be prepared.  I asked where he was from, and after discovering he was Portuguese, I asked which city he was from.  "Oh, just a small town in the north," he replied, and told me he was from Porto.  "Ah, okay, I never made it to Porto, but I do have a friend in Aveiro."  "Aveiro! That's where I'm from originally!  Who's your friend?"  And I told him.  And not only did he know him, he had interviewed him for a magazine article a year or so prior.  An absolutely insane moment of serendipity and small worldedness.

Over the next few weeks, we were chatting on an even more regular basis, and at some point started half joking - him about painting me again, me saying if he did I would have to *actually* sit for him instead of sending a crappy iPhone photo, him saying I would have to stay for a while if I did, etc.  And then I realized, I could visit him.  I mean, I didn't have a job.  My current activity was to travel around the world.  And while I hadn't planned on visiting Europe, I knew that if I did I could also visit one of my dearest friends in Scotland.  And a few other places on my European bucket list.  And visit Africa on another occasion, when I knew my new friends would be settled in and I could spend a bit more time there.  And suddenly, I was looking at flights and discussing options and it was actually happening.  I was venturing all the way to Portugal to pay a visit to someone I had only seen in person for a handful of hours four years prior, but whom I had come to appreciate as a friend and kindred spirit over years of occasional chats.  And we would see what would happen.
Posted by Outlander Abroad at 5:49 AM